If you’re looking for a Sands of Salzaar walkthrough regarding The Secret, that continues from Isra’s Promise, you’re in the right place. This main quest starts after you enter the instance inside the cave from the previous quest. Continue reading below for the walkthrough. 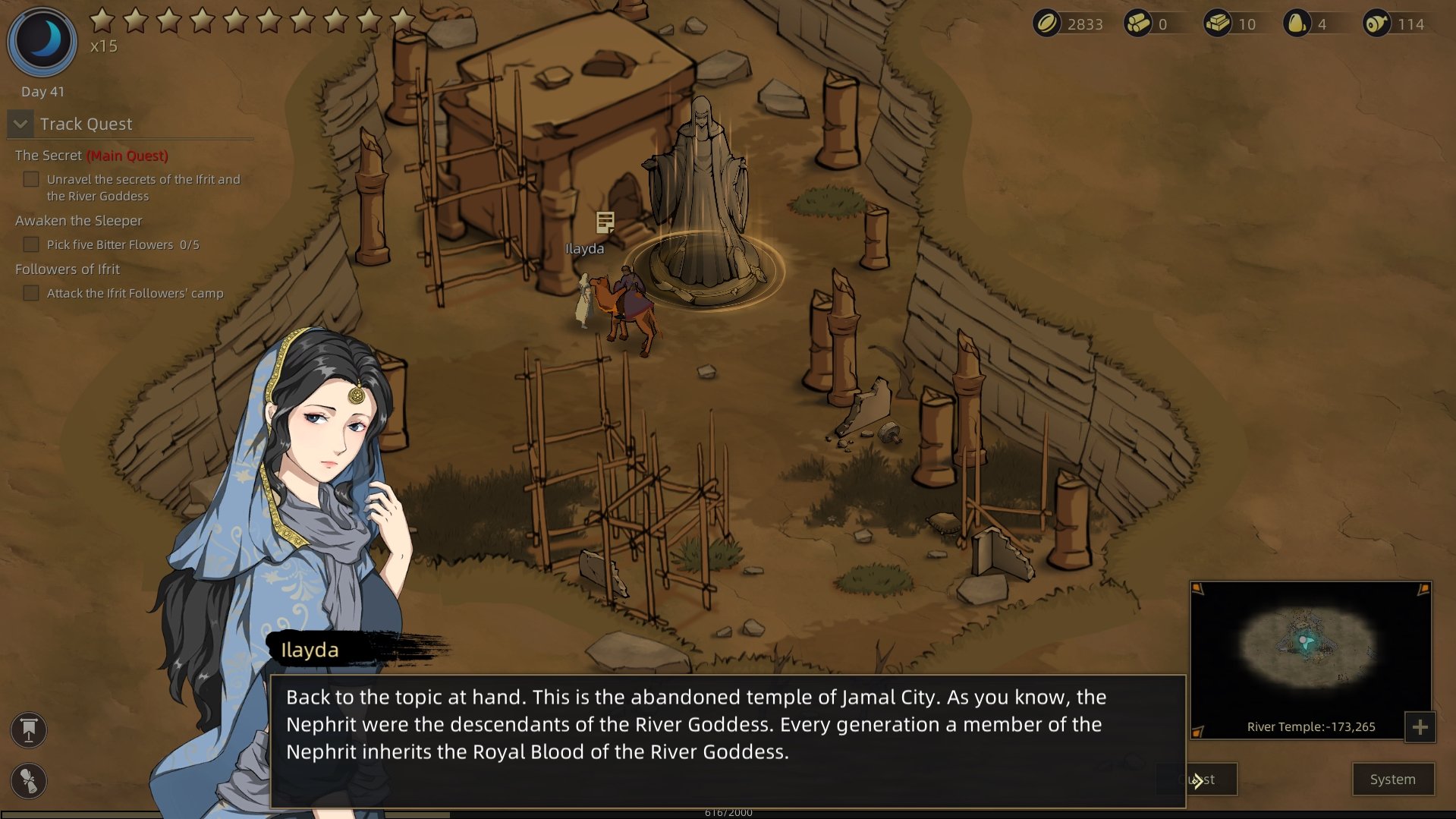 You’ll find Ilayda waiting near a statue up ahead. Start a conversation with her and she’ll tell you about the statue known as the River Goddess. This is supposedly the woman who removed the Ifrits when they started to attack the humans. Originally, the Ifrits and Humans lived in harmony according to Ilayda. In order to exile the Ifrits again, Ilayda asks for your help acquiring a magical scimitar from a mirage trial.

As the only remaining Nephrit with royal blood, Ilayda is the only one who can open this trial by interacting with the statue. Once the mirage trial is opened, you’ll be transported to a new area in the desert. And in a way, reliving a history long ago. 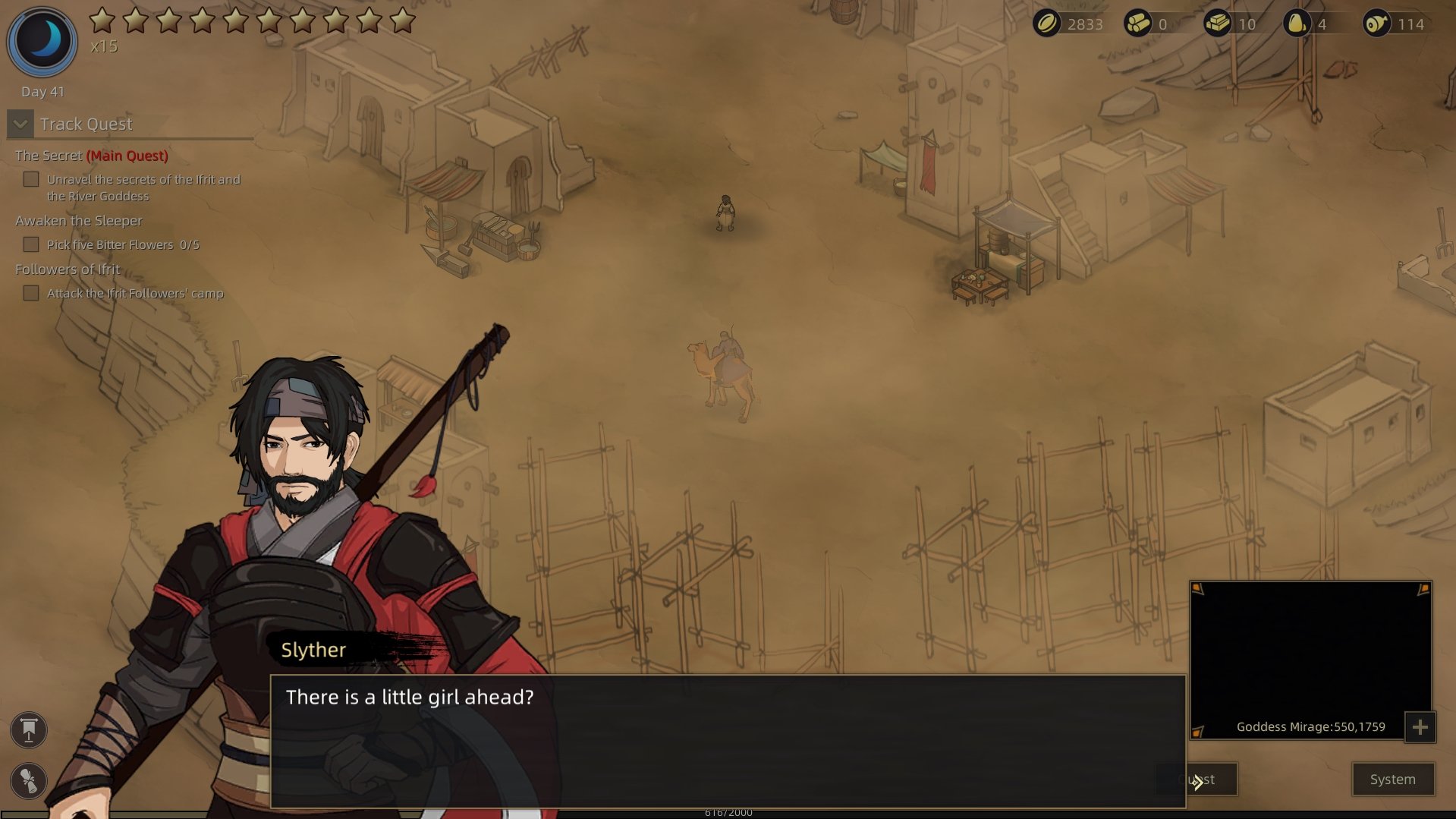 When you enter the new area, you’ll come across a little girl nearby. Since she’s a mirage, you can’t talk to or interact with her. Follow her north to a group of villagers surrounding her. Once you get close, a conversation will begin with the villagers calling her a witch. Shortly into the conversation, four of the villagers will attack you. This fight shouldn’t be too difficult, especially if you’re a Spiritmancer.

Once the battle is over, head toward the purple flame to enter a new instance where the Little Girl is. This new area will be blurry and difficult to see as if you’re underwater. Head down from where you are to find the little girl surrounded by another group of enemies. They’re called Mutant Bahars according to the kill feed. They’re tougher than the villagers, so be prepared for enemies with more health. 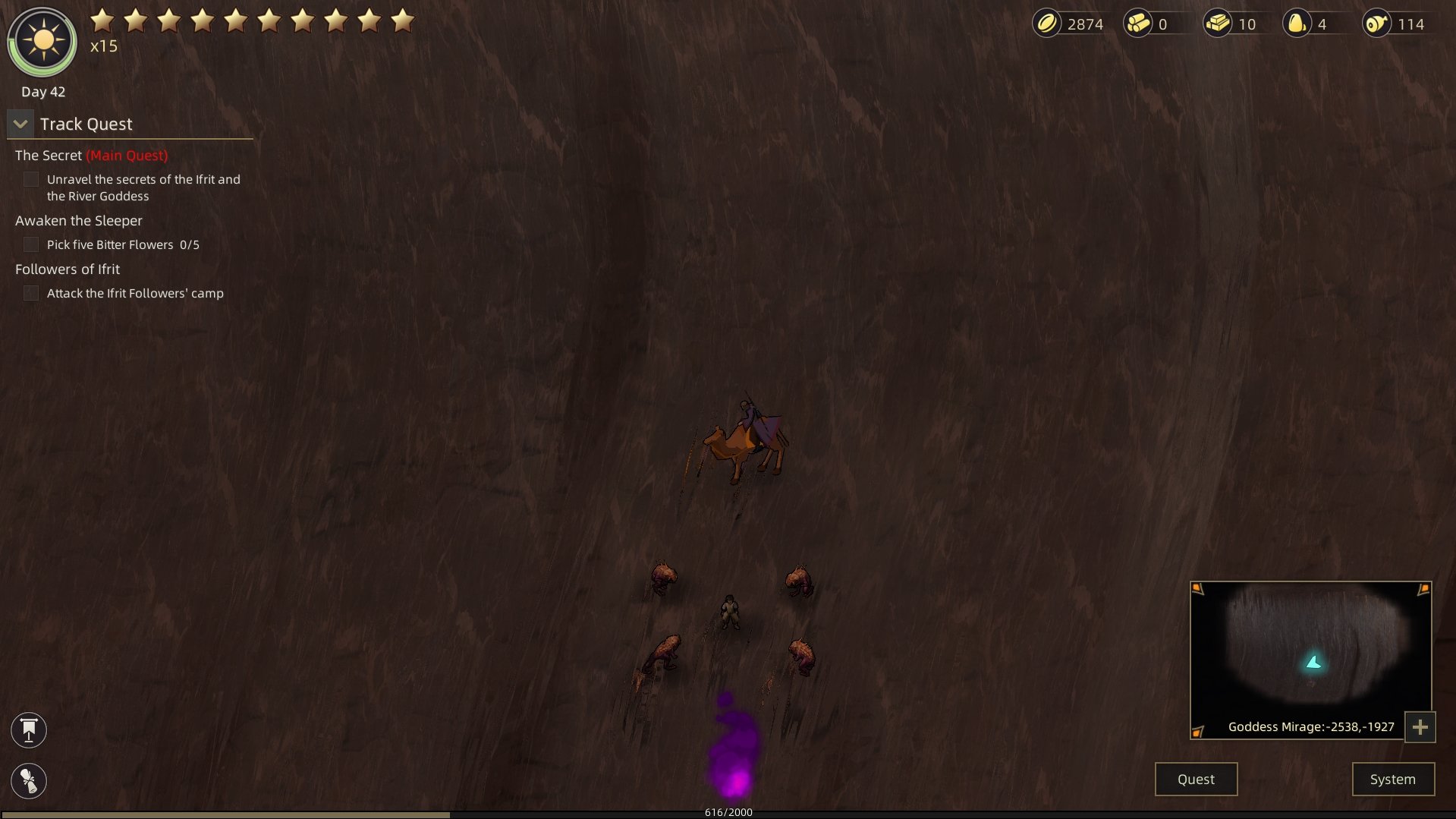 Now that you’ve finished this battle with the Mutant Bahars, head toward the purple flame for another new instance. This will transport you to an area with Ifrits similar to the Pahoehoe Lava Void in the Ifrit Ghoul Lair quest. Wander over to the group of three Ifrits where you’ll hear them bickering. This will start a slightly tougher battle with six Ifrits. Be careful of the Ifrit Caster attacking from far away.

Continue Through the Next Purple Flame 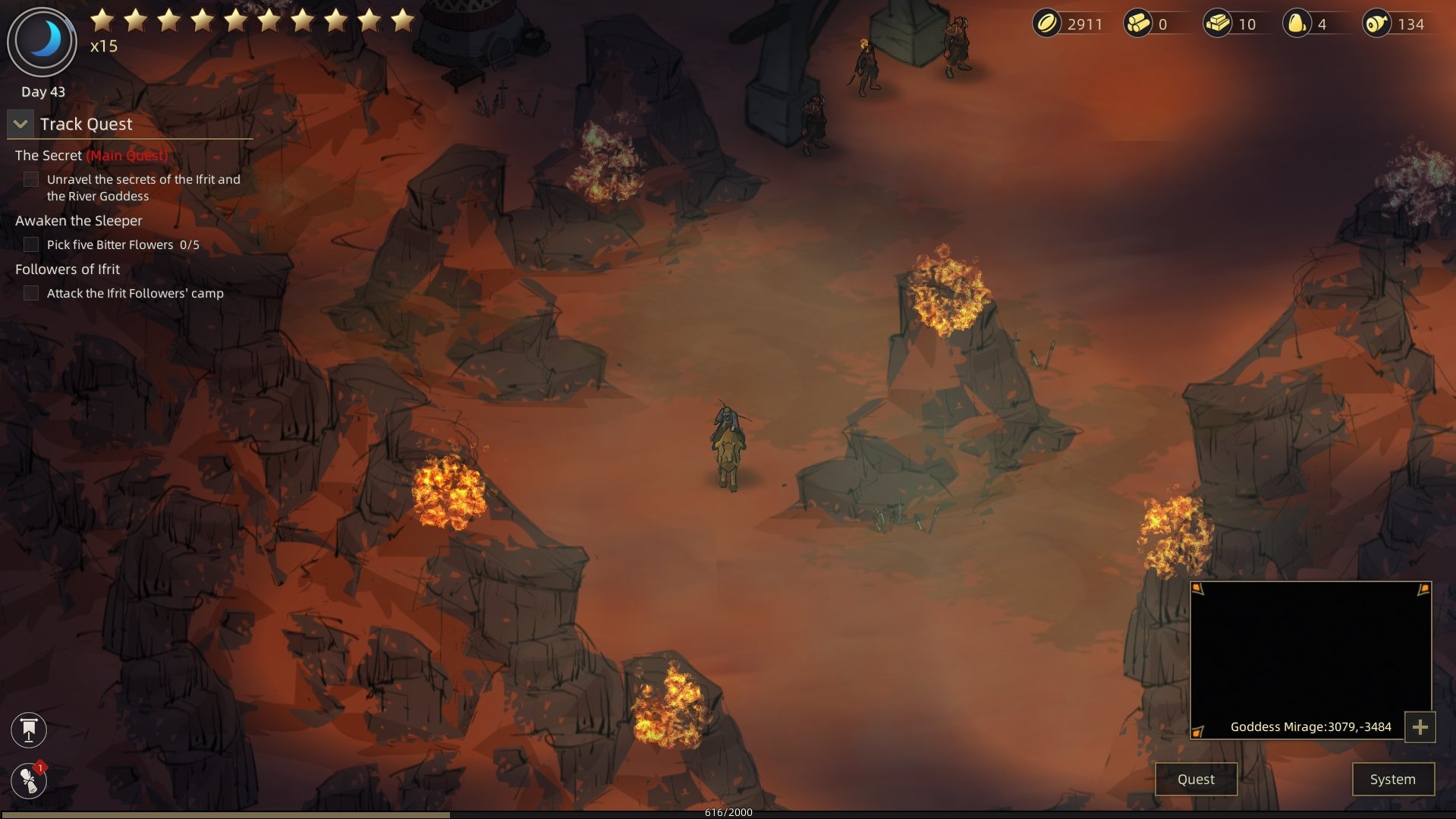 Once the Ifrit guards are out of the way, continue through the archway toward another purple flame. This will bring you to the final area with the Little Girl where she’s talking to the purple flame this time. You’ll have to take a step or two toward them before the conversation begins. The Little Girl tries to understand who the Obsidian Flame is and why she’s special. After a few responses back and forth, a chest will appear that you can loot. This will have the scimitar that Ilayda needs. 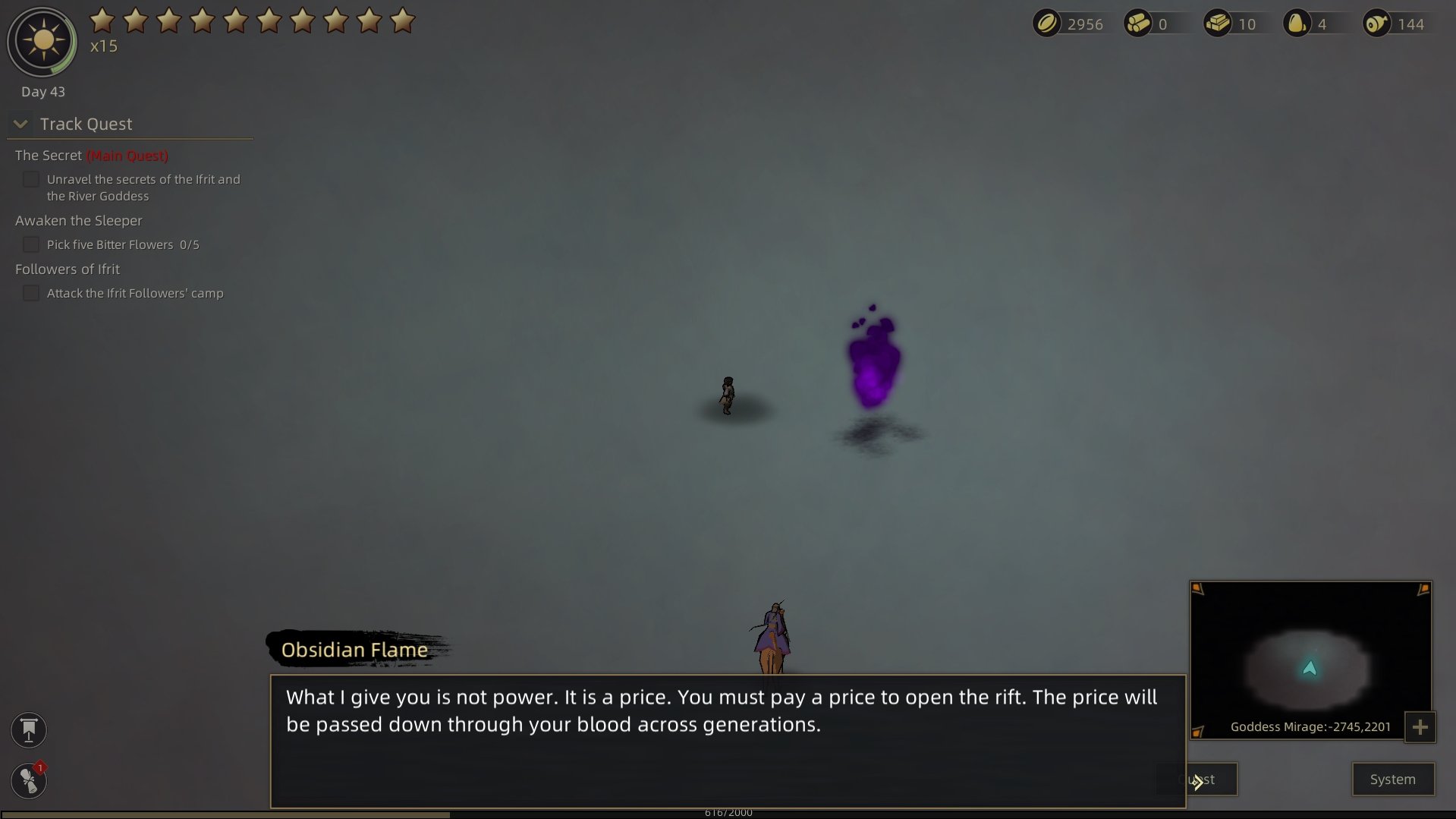 After a brief message from the Obsidian Flame before disappearing again, Ilayda will pull you out of the mirage trial. Once you finish your conversation with her about the scimitar and rift known as the Obsidian Flame, The Secret main quest finishes. This leads to the next quest in the story, Arcanists. For more Sands of Salzaar guides worth reading, find out How to Make Money Fast and How to Repair Gear.