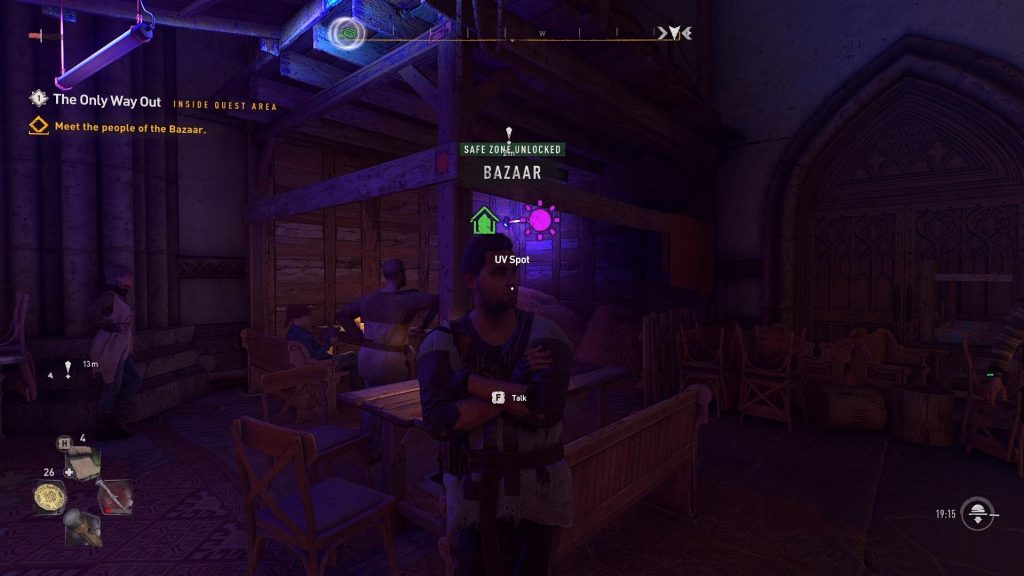 Dying Light 2 has a main story quest early on that feels like a bug due to how confusing it is, despite not actually being one. If you’re like many players confused with The Only Way Out and are stuck on this objective, “Meet the people at the Bazaar” this guide will help you out.

Part of the reason it’s easy to get confused is because there isn’t an objective marker for where you’re supposed to go. Or even which people at the Bazaar you should speak with. In a church filled with NPCs and another objective easy to miss, this quest is a little vague.

Meet the People of the Bazaar Solution 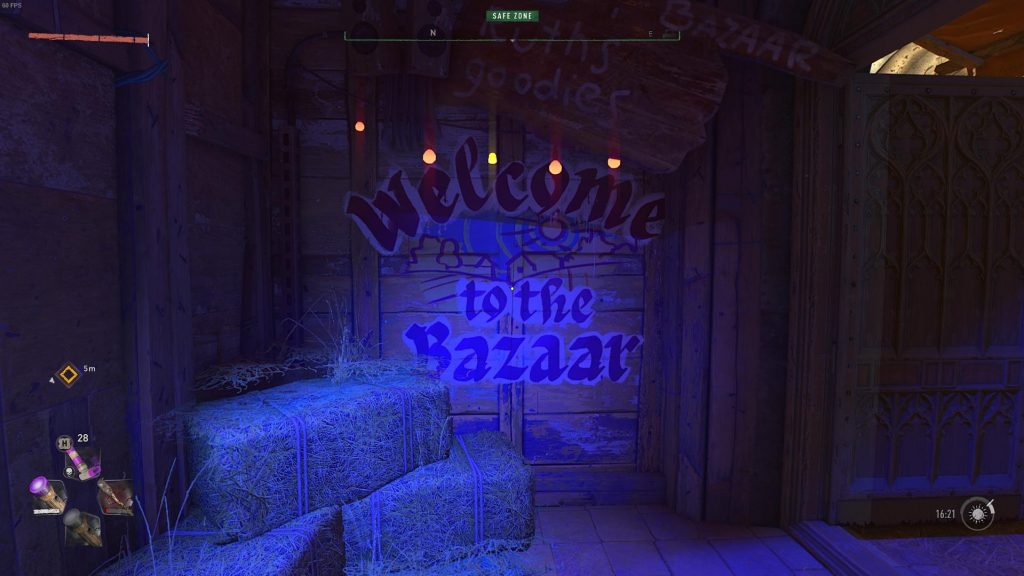 Make your way through the Bazaar church speaking with each important character and then one outside.

When you first enter the Bazaar you should have the objective, “Spend time at the Bazaar while waiting to hear from Hakon.” This will update to “Meet the people of the Bazaar” once you enter the church where a bunch of NPCs are. There are five people you’ll need to meet before heading outside the church to meet a sixth person.

One useful trick for speaking with the first five characters is to take advantage of your Survivor Sense. You can use it to make each of them glow green for a short moment. Otherwise, you can continue reading below for a screenshot of each character and notes on where they are. If you’ve already spoken with all six characters, the final section explains what you need to do.

Carlos (The Spark of Invention Side Quest)

When you first enter the church you’ll bump into Carlos in a cutscene. Once the cutscene ends, you’ll be staring directly at him and can start a conversation. It’s worth starting his side quest since it’s nothing too crazy if you already have the items needed. This is The Spark of Invention side quest. 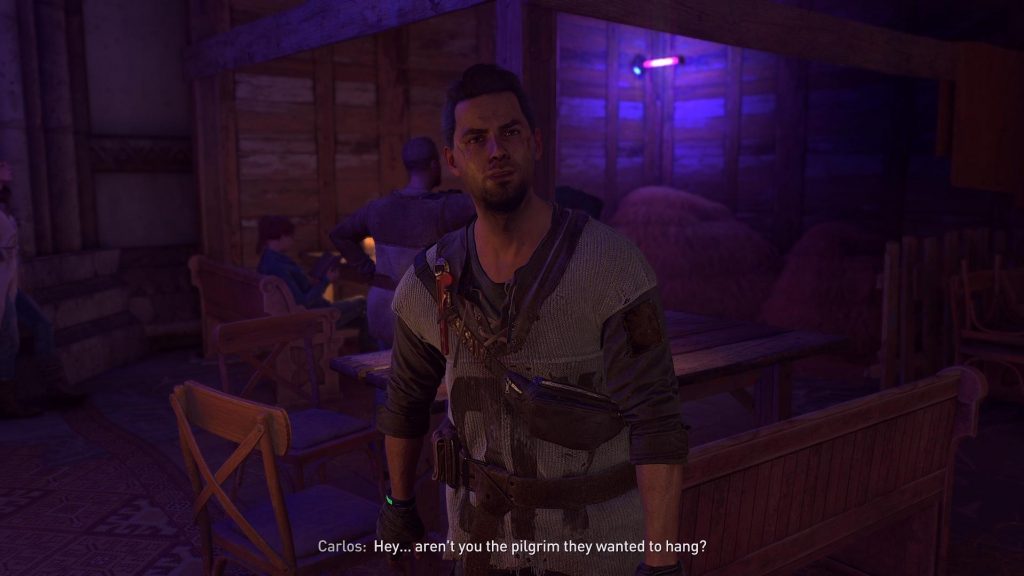 Carlos will ask for Electrical Parts for his side quest which you can complete for the Spark tip weapon mod.

Lena (Near the Entrance)

If you turn around after speaking with Carlos, you should see Lena near the entrance. She’ll be standing by the ramp headed upstairs. She doesn’t have quite as much to say as some of the other characters for The Only Way Out. 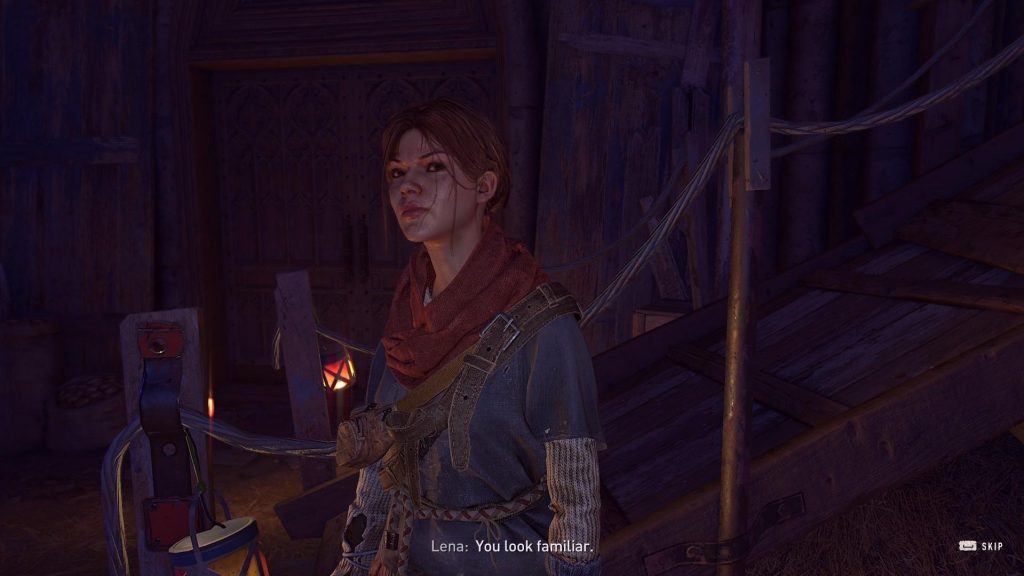 Lena quickly recognizes you from the first time you entered the Bazaar when you weren’t quite altogether.

Continue past Lena to the right where you’ll find Urban at the bar. He doesn’t have a side quest for you either, but he’ll crack a joke about when you first showed up. You can ask for some information about someone named Barney before moving on. 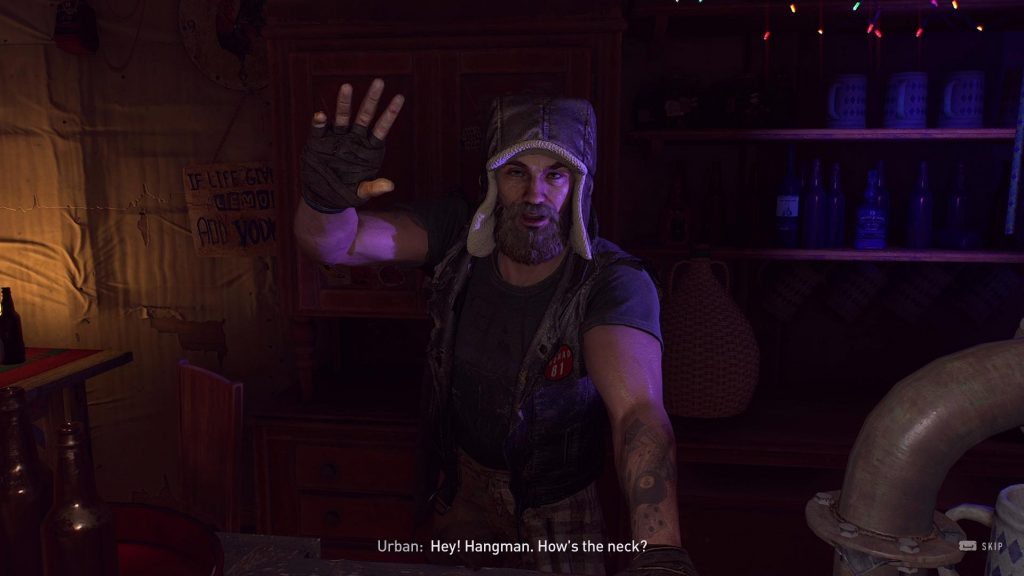 You can learn a little bit more about the Survivors faction in Dying Light 2 by speaking with Urban. But, you’ll need to make it further in the story to learn more.

Julian at the Vegetable Stall

Continue heading past the bar where you’ll find Julian with an exclamation point above his head. This represents a side quest that you don’t need to complete, but you do need to speak with him. After your first conversation, you can speak with him a second time to take on the side quest. 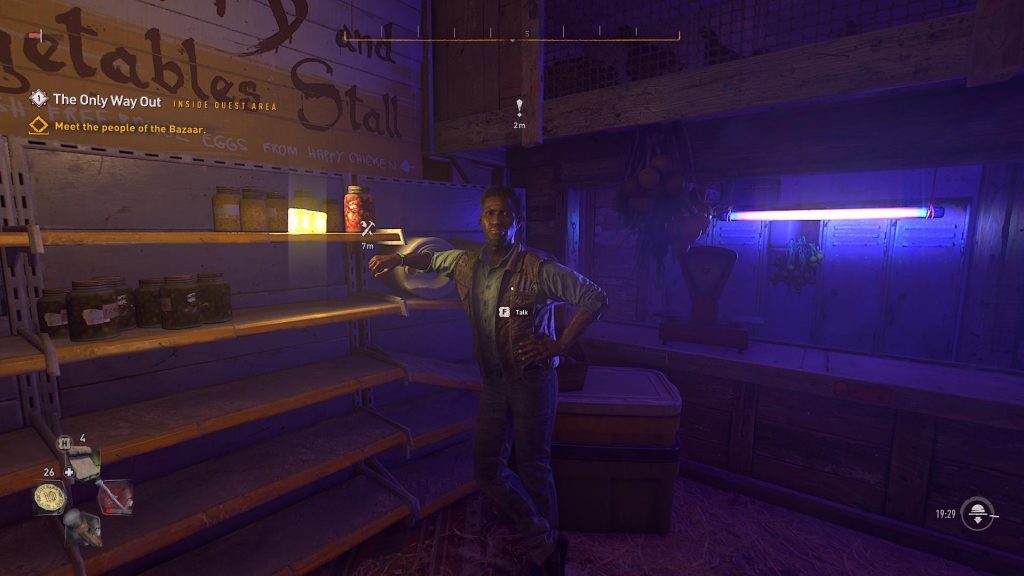 Julian’s caught up in a conspiracy or perhaps a revenge plot that you can help him solve.

Ahab (Near the Merchant’s Stall)

Continue making your way in the same direction past Julian where you’ll find Ahab leaning against the merchant’s stall. He quickly shows his awe at you being a Pilgrim, someone exploring outside the walls of Villedor. Ahab doesn’t have a side quest to take on, but he’s still one of the main NPCs for, “Meet the people of the Bazaar”. 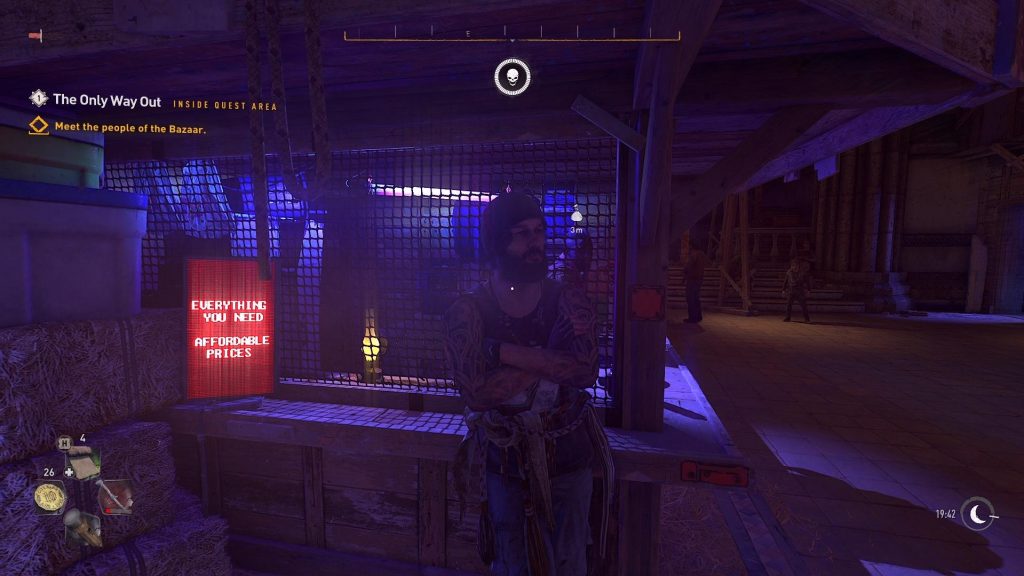 Ahab voices his support for you as Aiden responds with a little bit of sarcasm.

Now that you’ve finished speaking with all five characters inside the church, make your way outside. You can use your Survivor Sense to reveal a yellow page mission marker for a wall of missing person posters. If you exit the church the same way you came in, the wall is to the left of the entrance.

This will give you an interaction prompt to investigate the wall, triggering a conversation. A man named Abraham will come out giving context to all the missing person photos. Once you’re finished speaking with Abraham, continue to the next section to finish up this objective for The Only Way Out. 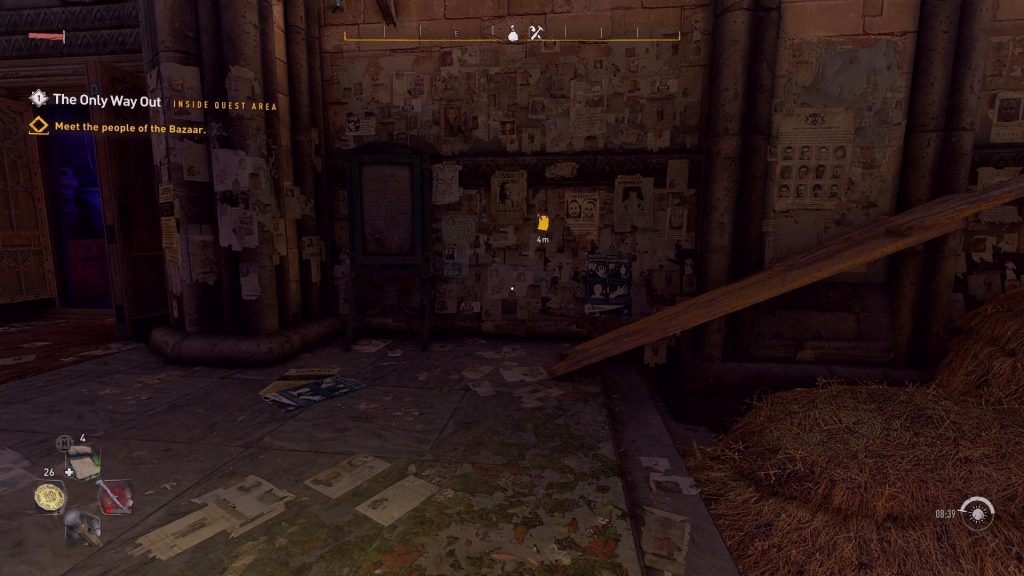 Take a look at those missing posters to see if you can find any information on Mia.

Completing Meet the People of the Bazaar

You’ll need to spend a little more time before this objective is completed despite the quest not giving any further info. Instead of looking for more people to meet or posters to investigate, you’ll need to pass time. This is a good opportunity to explore Old Villedor and complete a couple of side quests. While you can work on the Bazaar side quests, you don’t need to.

The main reason there isn’t an objective to complete is because you’re waiting for Hakan to reach out. Until you hear from him on your radio, you’ll need to wait. Unfortunately, you can’t take advantage of the player mattress inside the church to pass time. This won’t work despite working for certain quests later in Dying Light 2. 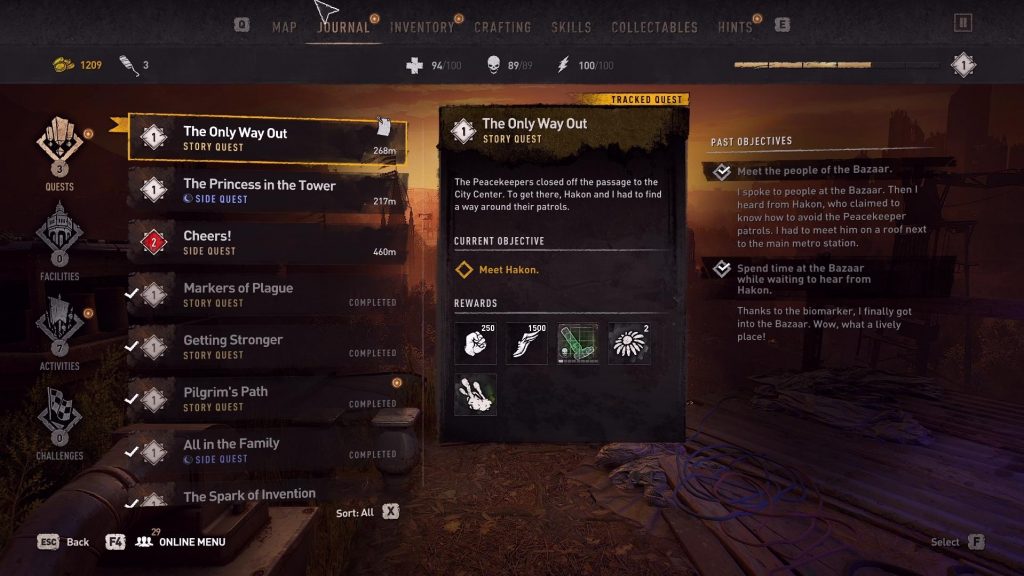 Reviewing some of the gameplay I recorded, it took about 25 minutes after I was done speaking with Abraham to hear from Hakan. Once Hakan finishes speaking with you over your radio, your objective will update to, “Meet Hakan.” This completes this part of The Only Way Out leading to simpler quest objectives. While it’s possible you can wait 25 minutes or walk away from your game, I can’t confirm it for sure.

That’s all there is to this Dying Light 2 walkthrough for The Only Way Out quest solving the objective, “Meet the People of the Bazaar”. It’s not surprising so many players think this is a bug because I even found myself wondering if it was at first. Be sure to visit more useful Dying Light 2 guides listed below.

this game is fucking dumb

Then why are you even here?