Get ready for Dying Light 2 using some of the best tips and tricks to get started in this post-apocalyptic open-world game. It doesn’t matter if you’ve played the original one or not, everyone can enjoy the sequel. While there are a couple of tidbits referring to the past, this is a new story following Aiden Caldwell.

Our guide covers everything from basic starter tips to skill recommendations you should prioritize getting first. This can help point you in the right direction so you don’t struggle as much. Not everyone is ready to put in over 500 hours!

Tip 1 – How to Fight Bandits 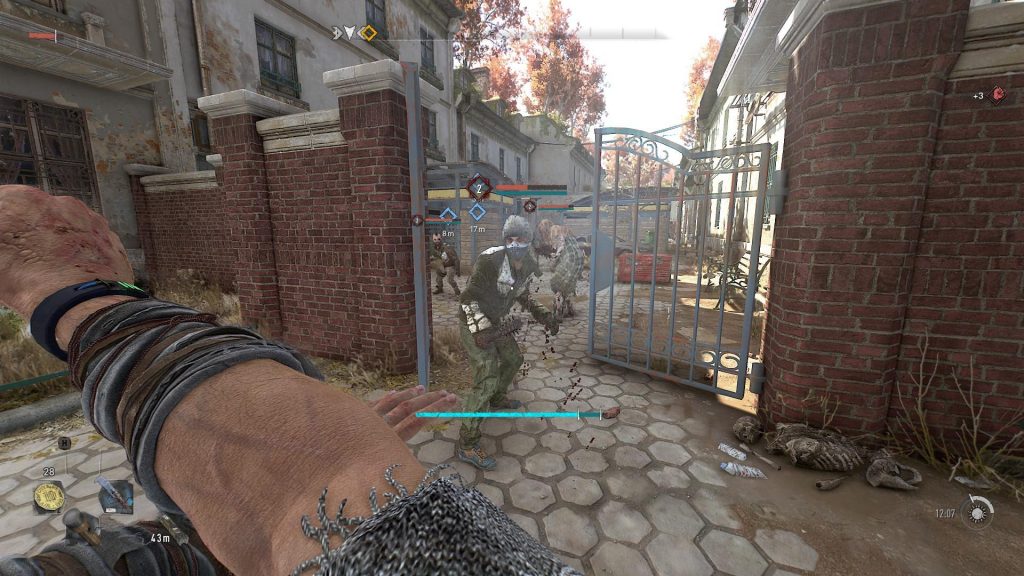 Humans can be tough to fight in Dying Light 2 if you’re not good at dodging and parrying.

Dying Light 2 is filled with a variety of enemies ranging from unique zombies to pesky bandits. While you can whack away at basic zombies easily, humans can be a bit more of a struggle. Chances are you’ll get one hit in before they block and then you’ll need to think smarter.

Fortunately, you can quickly learn how to take advantage of the AI if you don’t want to rely on parrying and dodging. If you’re fighting three bandits, you can keep switching between them to get hits in. For example, hitting bandit 1, then switching to 2, then 3. By the time you come back to the first one, they might not be blocking anymore. 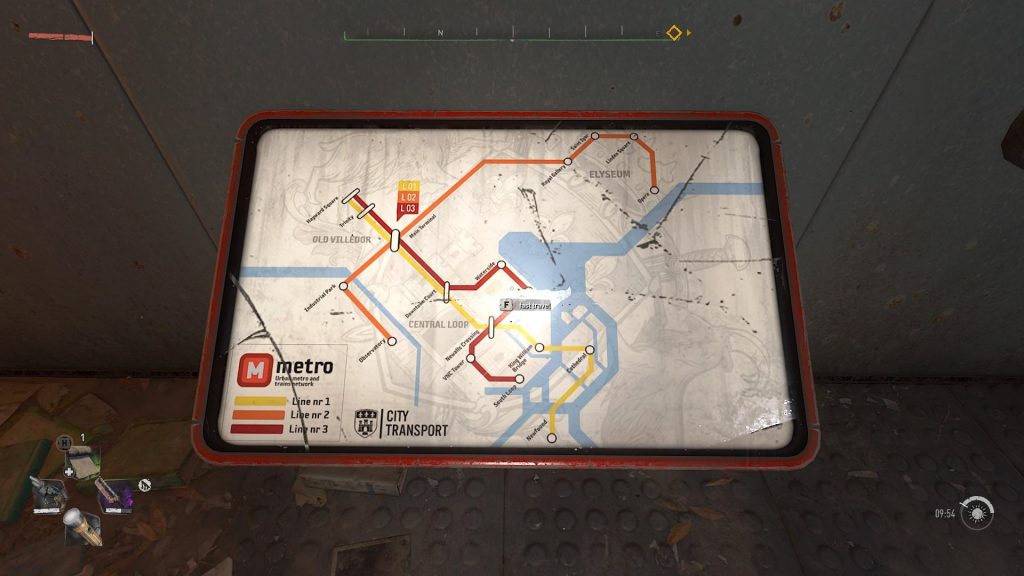 Clearing the metro stations pay off later when you want to take advantage of fast travel.

Keep an eye out for metro stations while using your binoculars to scan unknown locations. You can use these to fast travel around Dying Light 2 quickly if you need to backtrack. While the parkour of this world makes getting around fun, there are times when something is far out of the way. You’ll need to make some progress in the story before they’re available, but it’s useful to know where they are.

It’s easy to not think twice about needing them until you’re over 20 hours in and wish you had that metro station unlocked. Plus, you can get some combat experience as well as a safe house if you need somewhere to recover your immunity. Also, it’s important to mention you can fast travel from anywhere on the map using these stations.

Tip 3 – Get the Dropkick Skill 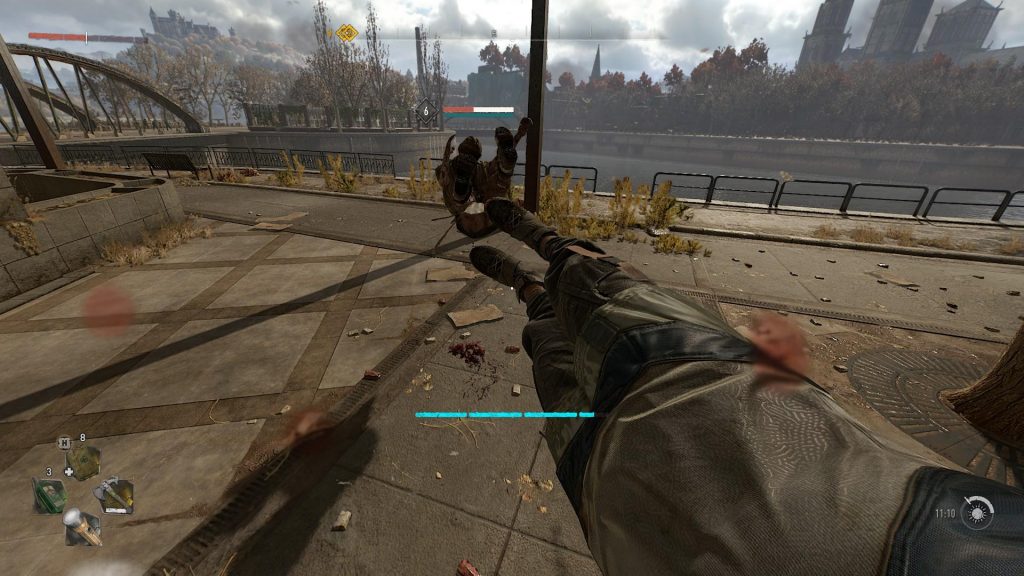 Dropkicking will quickly become one of your favorite skills to use.

Whether you’ve played the first Dying Light or not, the Dropkick skill is one of the best to get. Aside from it being extremely fun to dropkick zombies and bandits flying, it’s strong too. You’ll find opportunities to even kick a boss or elite enemy right into a wall of spikes for an instant kill.

While this won’t work on everyone, it works on almost every zombie and human that you can find. You’ll never run out of silly moments to kick a zombie off a tall building or right into a river. Also, it’s one of the earlier combat skills you can unlock as well. 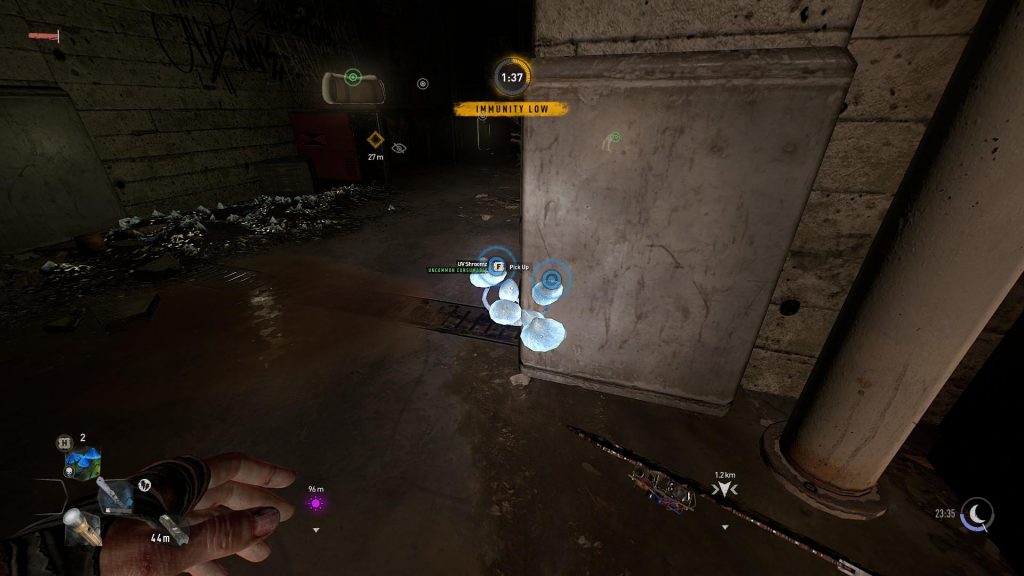 UV Shrooms often stand out in the dark so you can find them when you need that extra immunity.

A new mechanic in this sequel is dealing with your immunity to the infection. While you’re exploring at night or in dark areas, your immunity will start fading leading to your eventual death. This is why it’s important to return to UV light or get consumable items like UV Shrooms.

Fortunately, you can frequently find UV Shrooms in dark areas or at the Roof Groves marked with yellow trees. I wouldn’t rely on just these since you’re bound to run out of them if you do. However, as you get further into Dying Light 2, you’ll have plenty of opportunities to get UV light via safehouses. 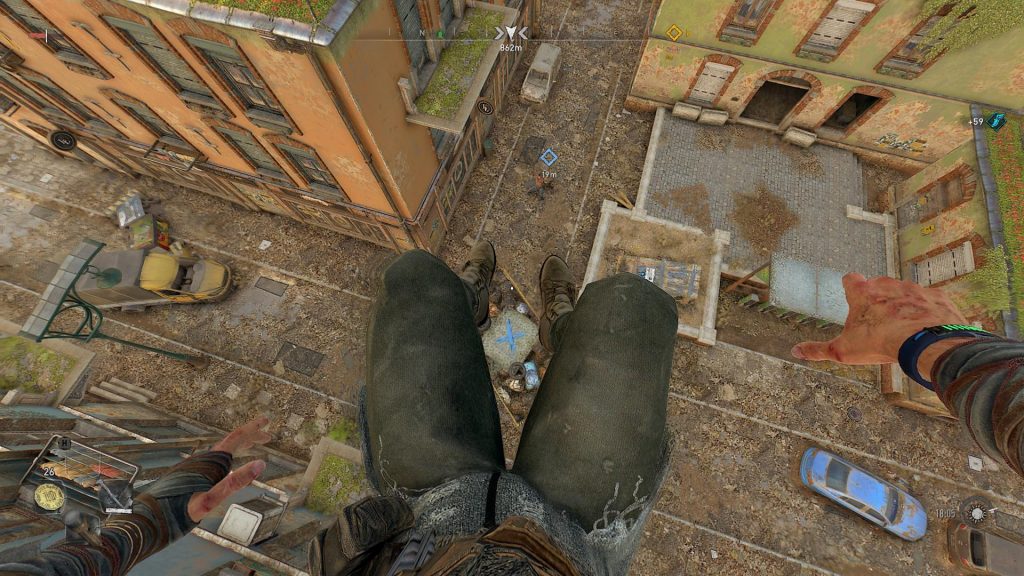 Fall damage is a major pain in Dying Light 2 so you’ll need every tip you can get. The Active Landing skill path is helpful for reducing fall damage as well.

A lot of Dying Light 2 takes place running along rooftops depending on how you choose to play. This can also lead to plenty of moments where you miss a jump and get hit hard by fall damage. That’s why it’s important to talk about some tips and tricks for avoiding fall damage so you don’t lose progress.

Right from the start, you can fall on mattresses marked with an X or giant piles of garbage bags on the ground. One example of a mattress is shown in the above screenshot. However, my favorite trick is getting the early Air Kick combat skill. You can land on an enemy from above regardless of distance. Just make sure you activate the Air Kick when dropping on them. 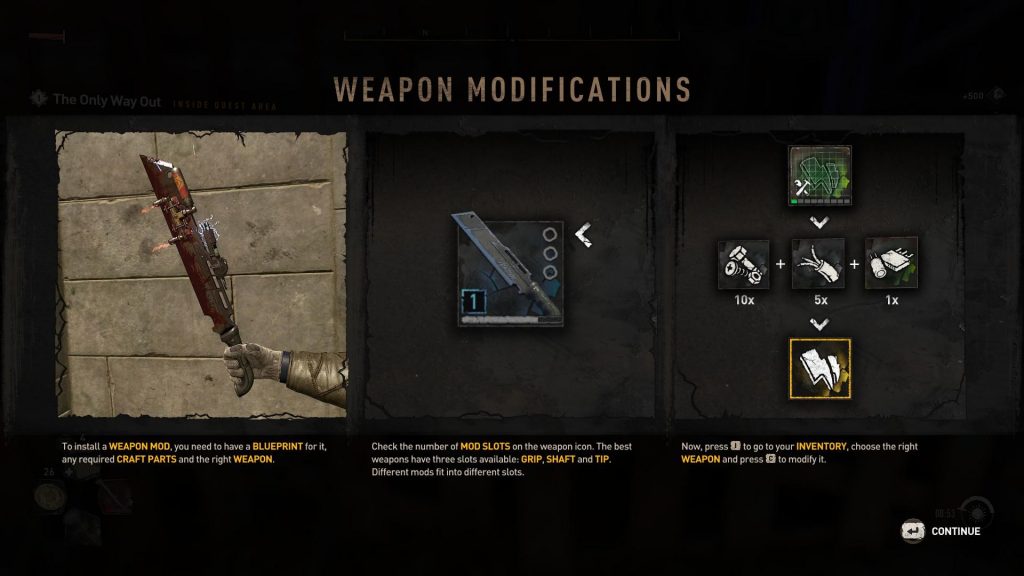 Weapon mods add that extra damage you need for taking out tough enemies in high-rank areas.

Weapon Mods are a great way to increase your damage while also adding in some unique traits to use. For example, the Flame mod makes it so a fire effect spreads between enemies when you get a critical hit. This can help take out a horde of zombies or at least deal a good chunk of damage.

With that said, some of the best weapon mods can immobilize your target making them vulnerable. Such as Spark and Frost so you can whack away at your enemy without needing to worry. But, the Blast Mods can be even better since they have active abilities with the same elements. Avalanche is a good example since you can also freeze a group of enemies without needing a critical hit.

Tip 7 – Use Zombies to Your Advantage 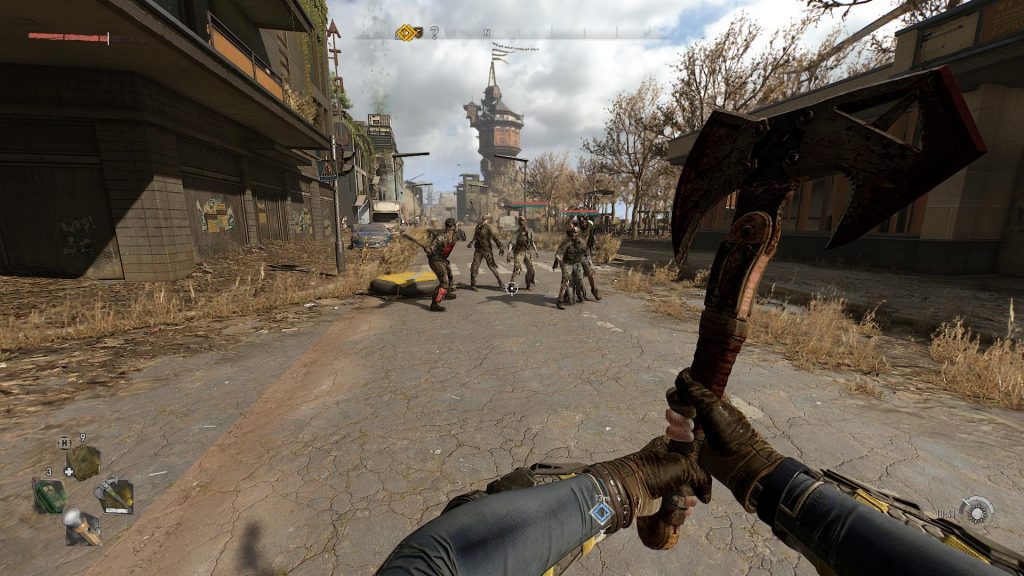 Luring a swarm of zombies over to some renegades is a fun way to get some help.

Zombies are typically known for being brain dead and wandering toward the closest human they can find. Now all you need to do is take advantage of this by not being the closest human. Sometimes you’ll find an opportunity where you can force a bandit closer to a batch of zombies so they get distracted.

There’s nothing better than a bandit with their back to you because they’re busy dealing with a zombie. Or even a zombie getting a hit in because the bandit is too focused on you. Also, you may get a chance to disable the UV lights at a bandit camp. This can be deadly if you do it at night when the more advanced zombies are out.

Tip 8 – Best Way to Use Binoculars 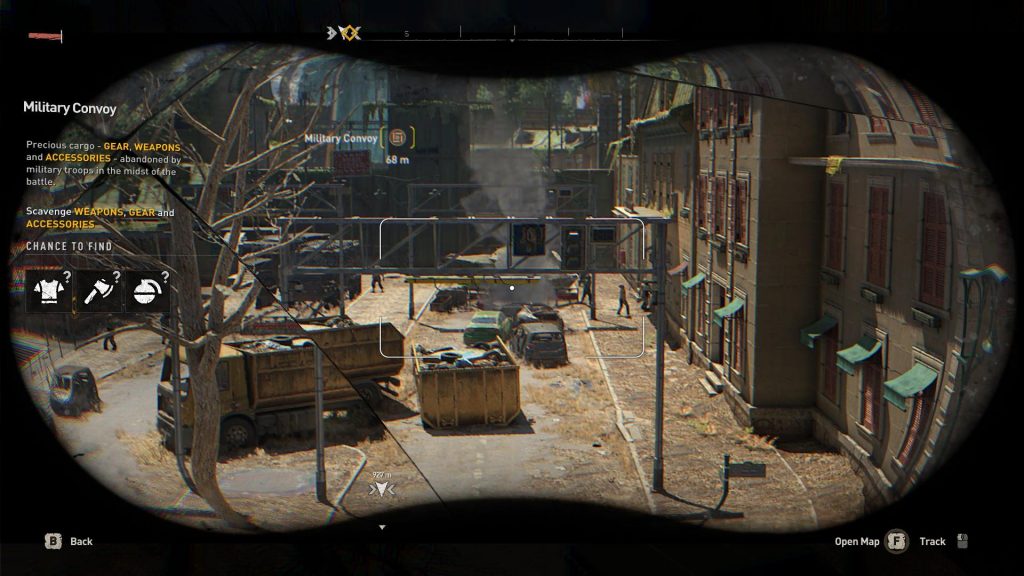 Revealing unknown locations can be a pain if they’re even just slightly out of the way.

Binoculars are great for scouting out locations where you can get some loot and experience. However, you’ll quickly notice that there are tons of question marks to reveal and this can be overwhelming. That’s why I recommend climbing somewhere up high before spending too much time using your bincoulars.

When you’re first starting out in Dying Light 2, it’s difficult to get a good read on what type of question mark you’re scanning for. Once you’ve got some time in, you’ll be able to track what you’re revealing more easily. Until then, take advantage of tall locations like Windmills to search the city. 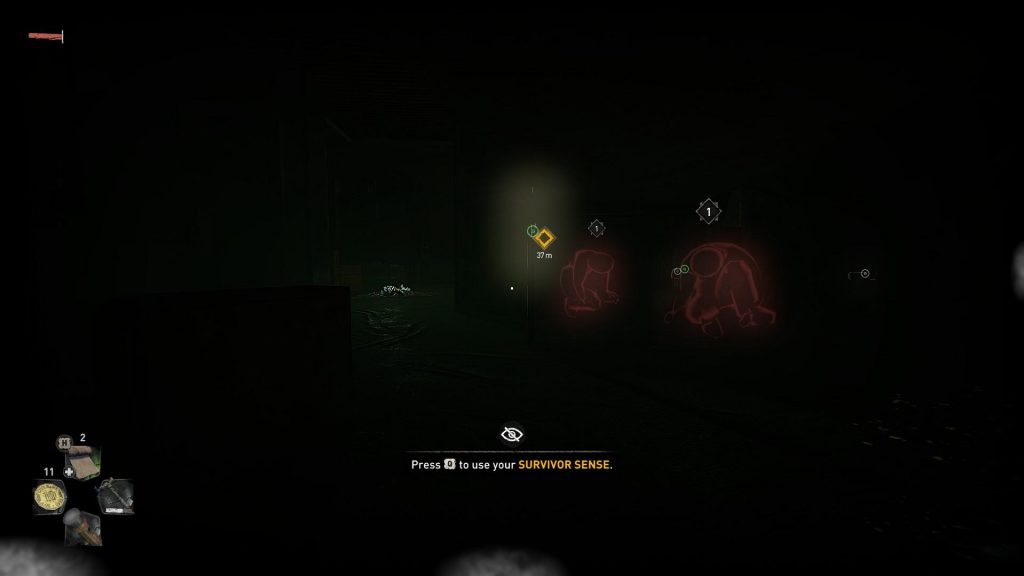 Highlighting enemies and loot is always helpful when using your Survivor Sense.

You’ll get a tip to use your Survivor Sense to spot enemies early into playing Dying Light 2. This is especially useful when you’re sneaking around sleeping zombies or to avoid bandits. Unless you’re trying to not abuse the mechanic, it’s important to use it frequently.

And even if you’re not sneaking through a dark building, you can use it to find loot more easily. Considering how much loot is hiding in wardrobes and desks, you’ll need it to spot those items. Otherwise, don’t be surprised if the developer placed a sleeping zombie right around a corner to throw you off. 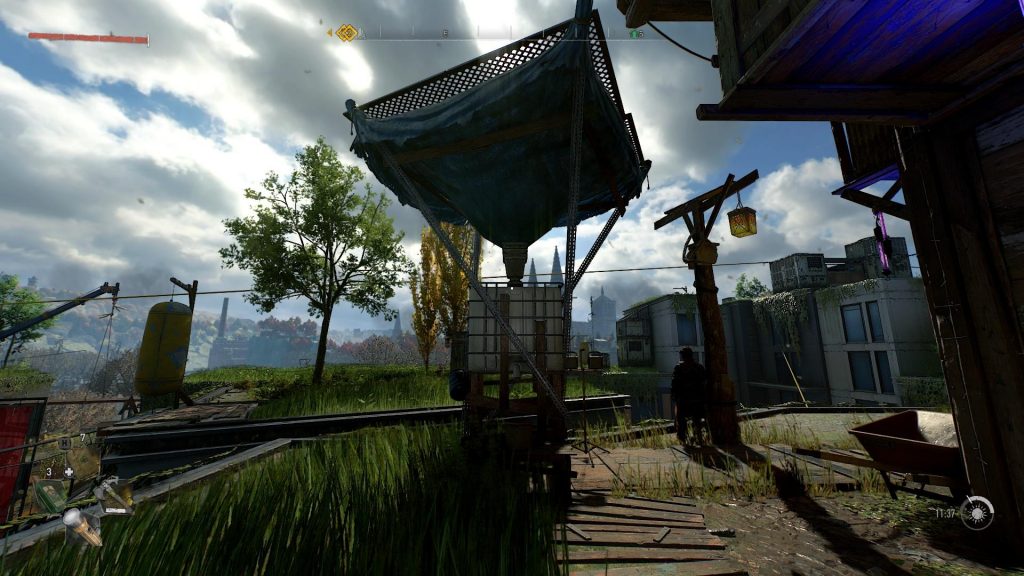 Rain Collectors aren’t the best way to get health but they can give a much-needed boost when you’re low.

The most common way to heal is crafting your own Medicine from supplies found at Roof Groves. But, you can quickly run out of the materials you need especially since Medicine doesn’t heal for a lot. This is why it’s useful to upgrade the blueprint at a Craftmaster so long as you can get the right resources.

Fortunately, there are a few more ways to heal whether you have the right items or not. You can search the city for Rain Collectors at outposts and even drinkable fountains after turning the water back on. You’re more likely to find Rain Collectors since I haven’t had much luck with fountains. But, you can also rest at a safehouse or settlement to heal back up to full.

That’s all there is to this Dying Light 2 guide filled with tips and tricks to help you get started. If you have some tips of your own, feel free to share in the comments below or let us know how excited you are to hop in!

A Dying Light 2 key was provided by a PR agency for the purpose of our coverage.