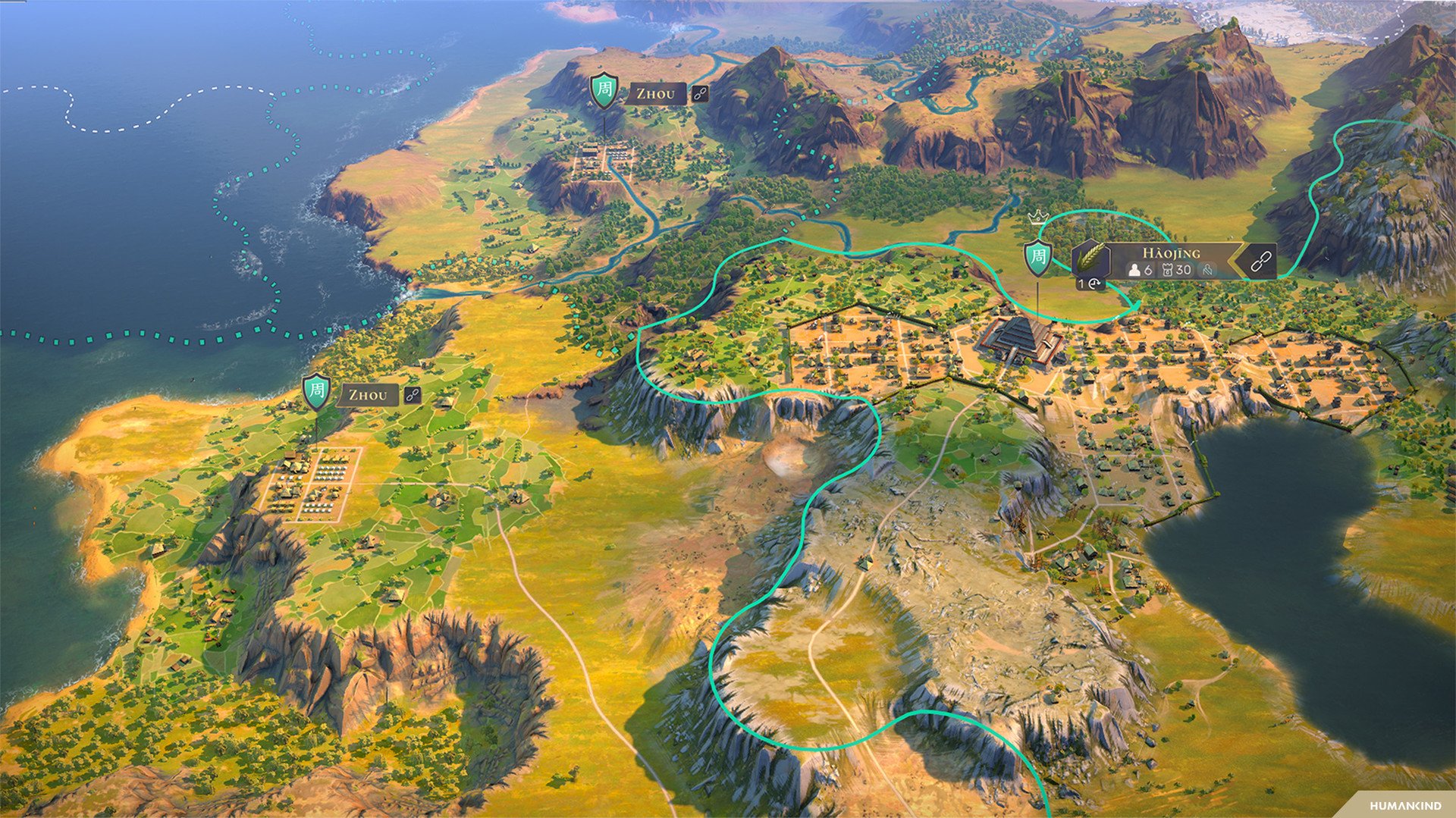 Humankind is a 4X strategy game where knowing whether or not to attach an outpost can be important. This is because attaching an outpost comes with advantages and disadvantages that you should understand before rushing in. The last thing you want is a city mutiny where independent units spawn to fight you.

This Humankind guide covers when to attach an outpost, alternatives, how to downgrade cities, and more. Continue reading below for the pros and cons. If you’re looking specifically for how downgrading sort of works, it’s the section near the bottom.

To Attach an Outpost or Not in Humankind 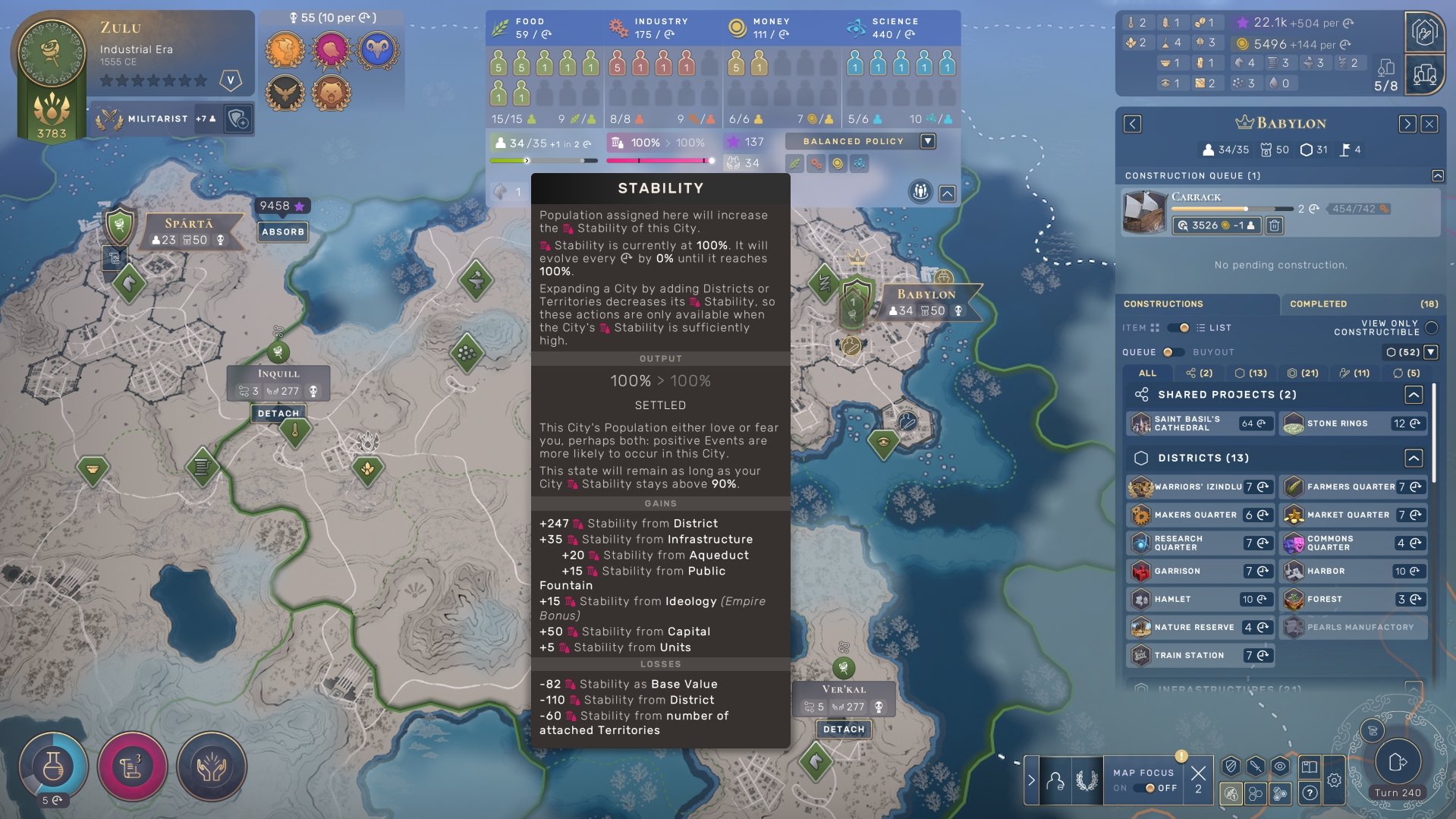 The main reason to debate attaching an outpost is if you can handle the stability loss.

Choosing when to attach an outpost to a city or to simply create a new one altogether depends on your current game. When you’re first starting out, you’ll want extra cities to continue growing. Getting an extra construction queue going to take advantage of your territory is huge.

However, you won’t be able to keep creating new cities due to the City Cap. This restricts you from expanding too much by adding negative Influence penalties. As explained in our guide on How to Increase City Cap, you can raise it through technology primarily. With that said, it’s still important to claim regions with outposts since there aren’t any major cons to doing it.

Take a look below for the pros and cons of attaching an outpost to a city. Worst case scenario, you can always detach an outpost and turn it into a city later. Or even merge that city into another one at a certain technology.

Pros of Attaching an Outpost 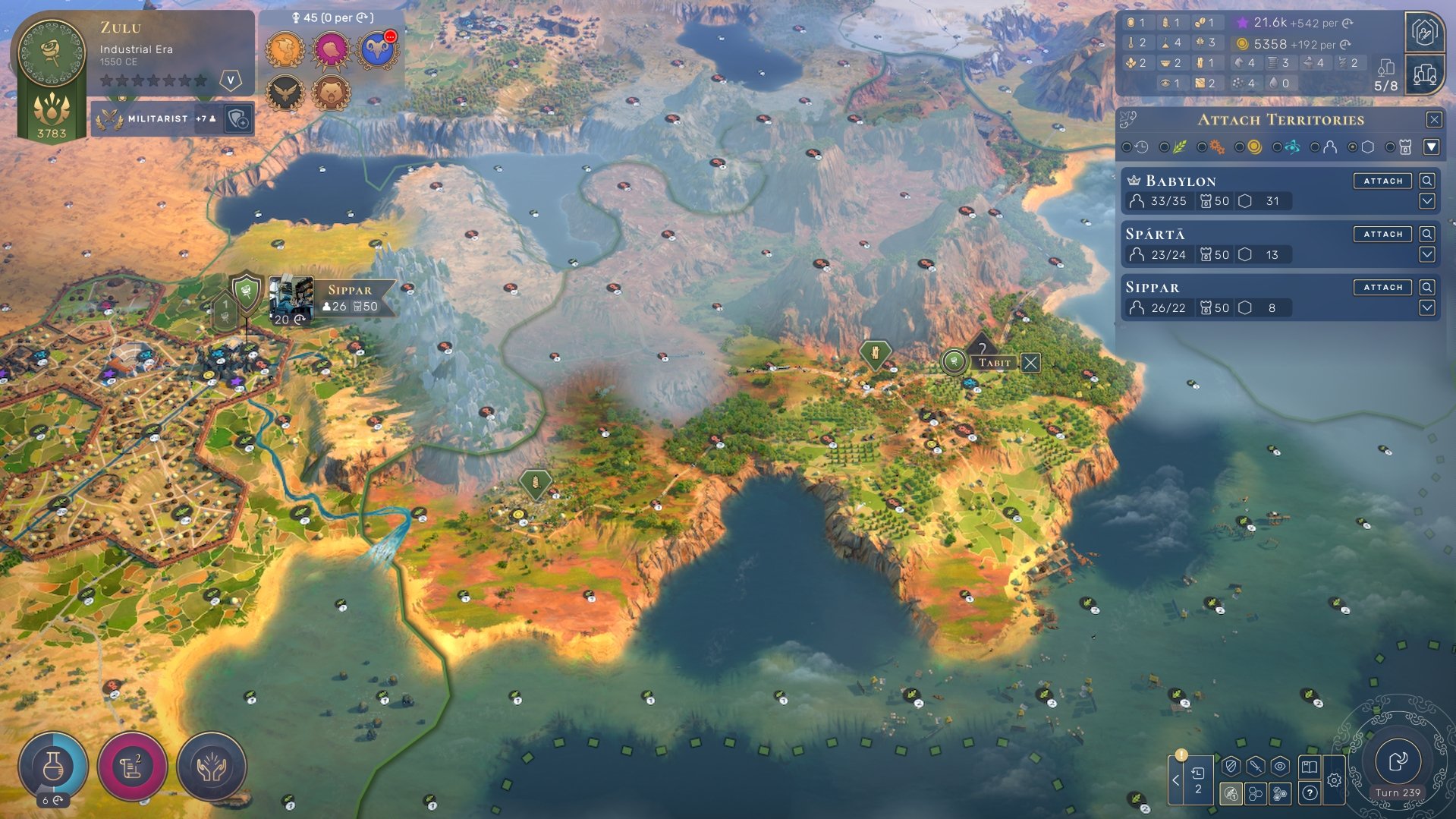 Growing the territory of a city is necessary if you want to continue building it up.

The first and most obvious pro is that the city it’s attached to will gain the resource FIMS from that territory. This primarily applies to Food and Industry, but you may get other ones too. You can take over a territory that isn’t great for a city but has a huge chunk of Industry. This works well for taking advantage of that without placing a bad city.

The second popular pro is that you can now build districts in that region for the city it’s attached to. This provides more room for districts if your territory is covered with mountains and water. Also, you gain access to tiles that may have better yields for placing districts. Especially if it’s an area with a natural wonder. 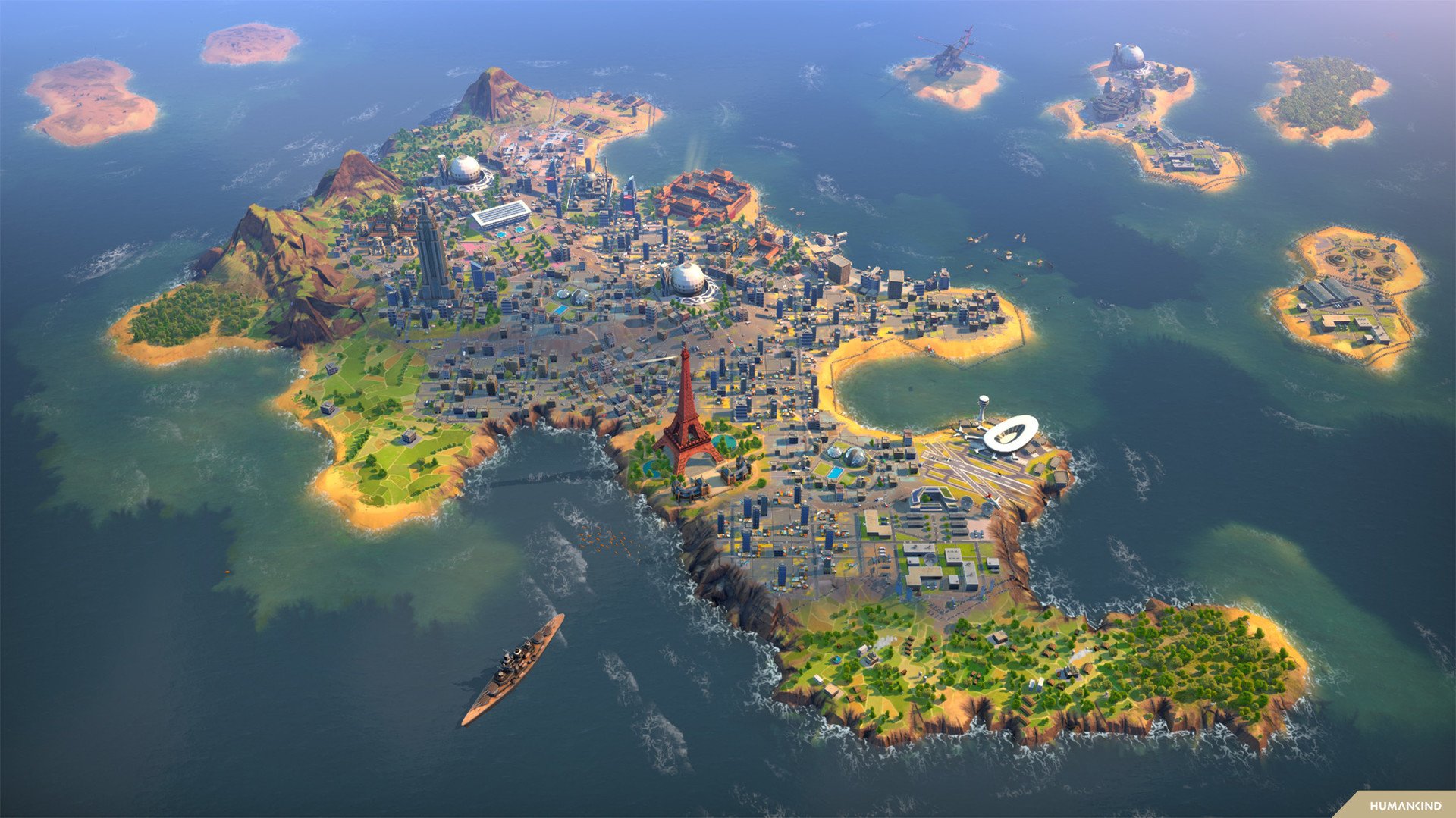 Connecting an island city to other regions can help expand your territory for districts.

In addition to building districts in that new region, you can also place a Garrison district. This helps with providing combat strength boosts to units fighting near an enemy border. And you can even set the spawn for new units to be there. So you don’t waste turns moving them to the front-line.

Attaching an outpost doesn’t count toward your City Cap limit. This makes it easier to claim territory that you may use later so another empire doesn’t. However, be careful of placing outposts bordering another empire’s territory since they won’t like that.

The last pro that comes to mind is an outpost gaining the fortification value of the city it’s attached to. The main benefit of this is making it take longer for an enemy to ransack it. Which can be a pain since you’ll lose that territory if it’s destroyed.

Cons of Attaching an Outpost 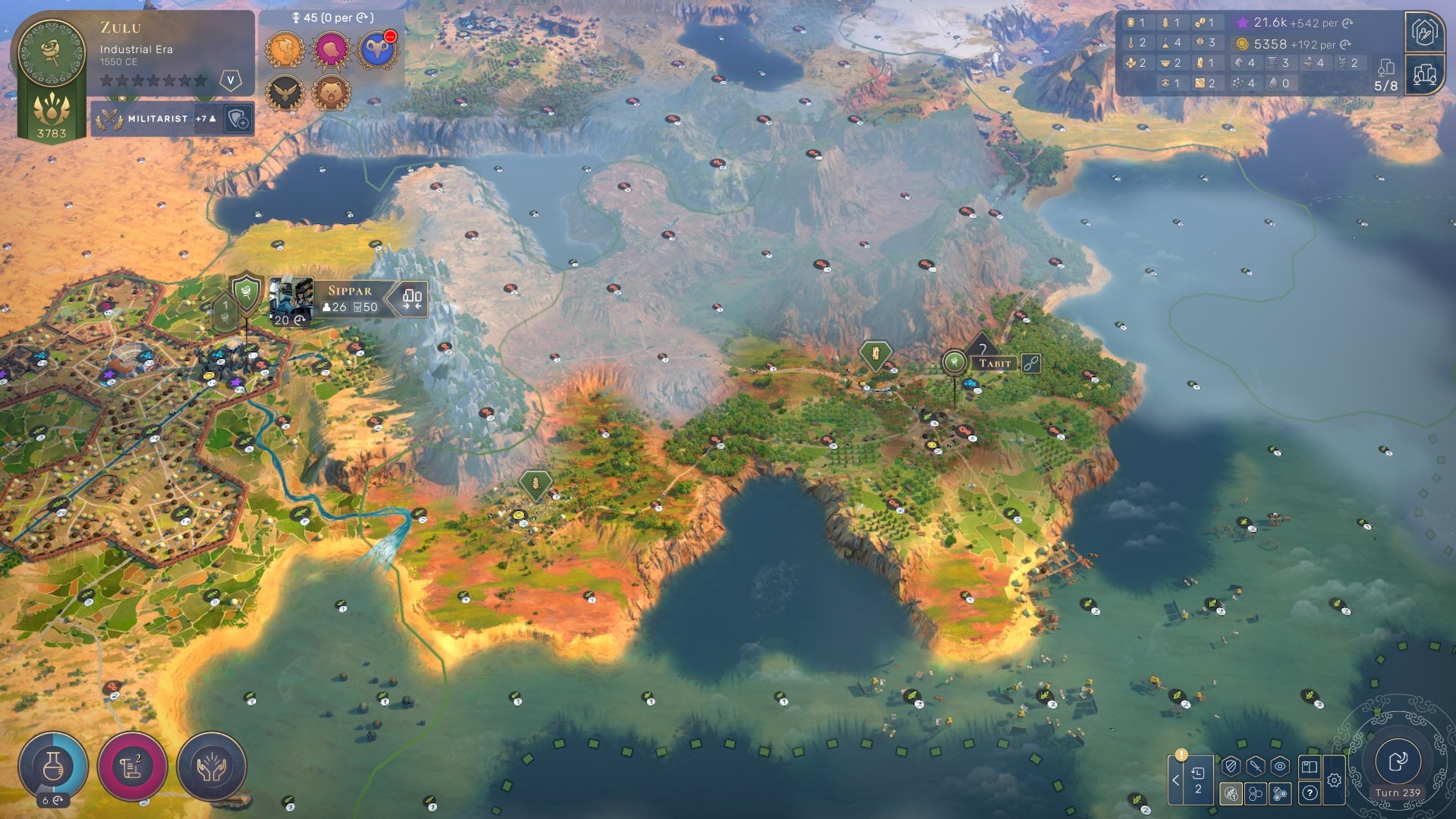 Combining too many territories early on can lead to independent rebels forming.

The main con of attaching an outpost in Humankind is that it comes with a -20 stability penalty. If you’re in the early game and don’t have infrastructure producing stability, you may not be able to attach an outpost safely. In most cases, you can likely attach one but not necessarily several. Alternatively, you can attach an outpost to a different city instead.

Sometimes it’s better to create a city if it’s in a good area so you can take advantage of improving those yields. Plus, you’ll gain another construction queue for useful things like more units simultaneously. And you can build that city differently if you’d prefer to focus on other yields. Such as going heavy on science or money, for example. 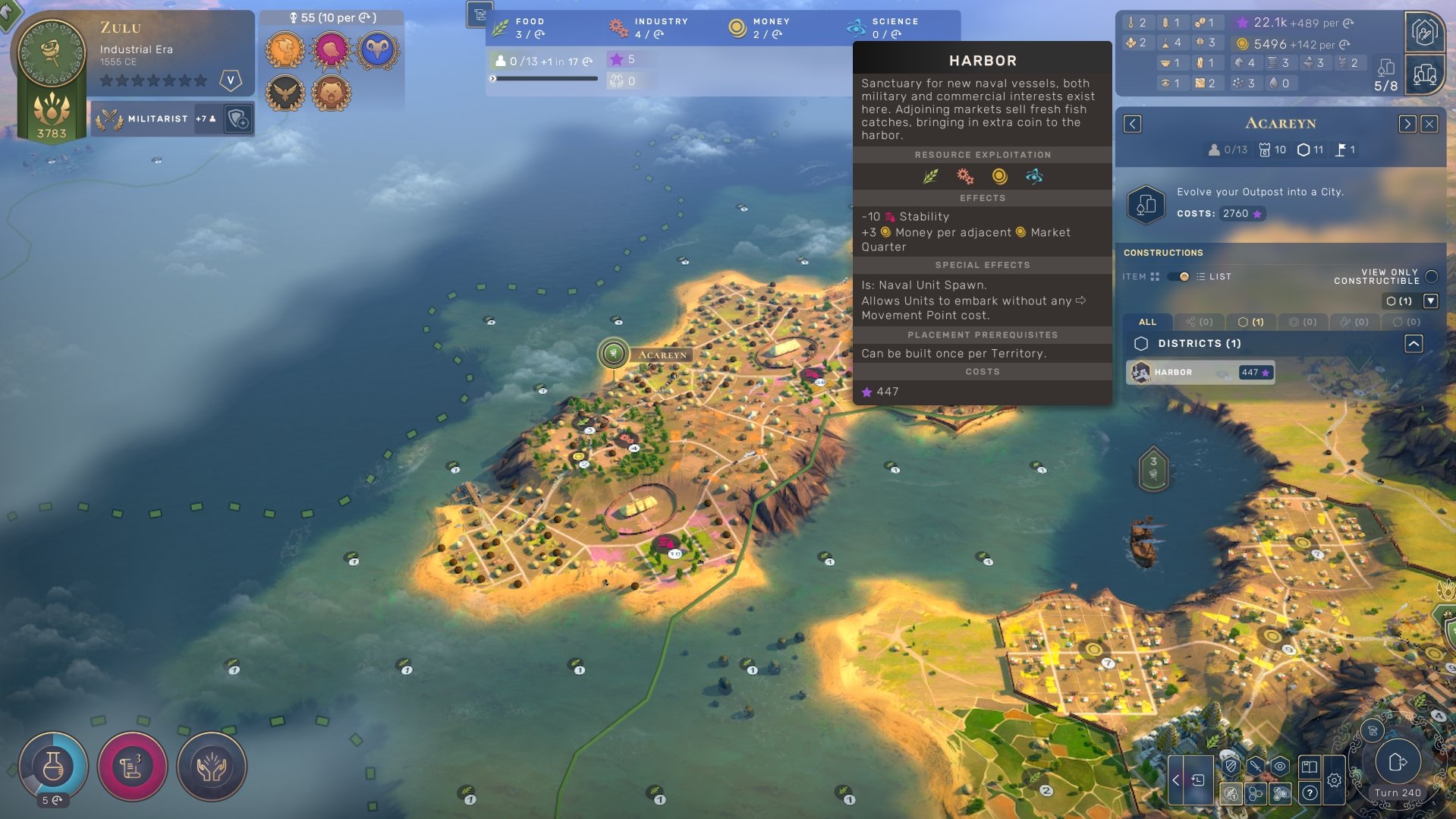 Using Influence to purchase Artisan’s Quarters and Harbors is a great way to save time.

Once you attach an outpost to a city, you can no longer purchase buildings in that region with Influence. You may want to instantly acquire strategic and luxury resources with Influence this way. Otherwise, you’ll need to wait to build it when you could be working on something else instead.

The last con that isn’t too much of one is that you’ll need to spend Influence. The cost is dependent on how many outposts are already attached to the city. So you may want to prioritize building a new city for outposts if you have one with too many attached.

How to Attach Outposts in Humankind 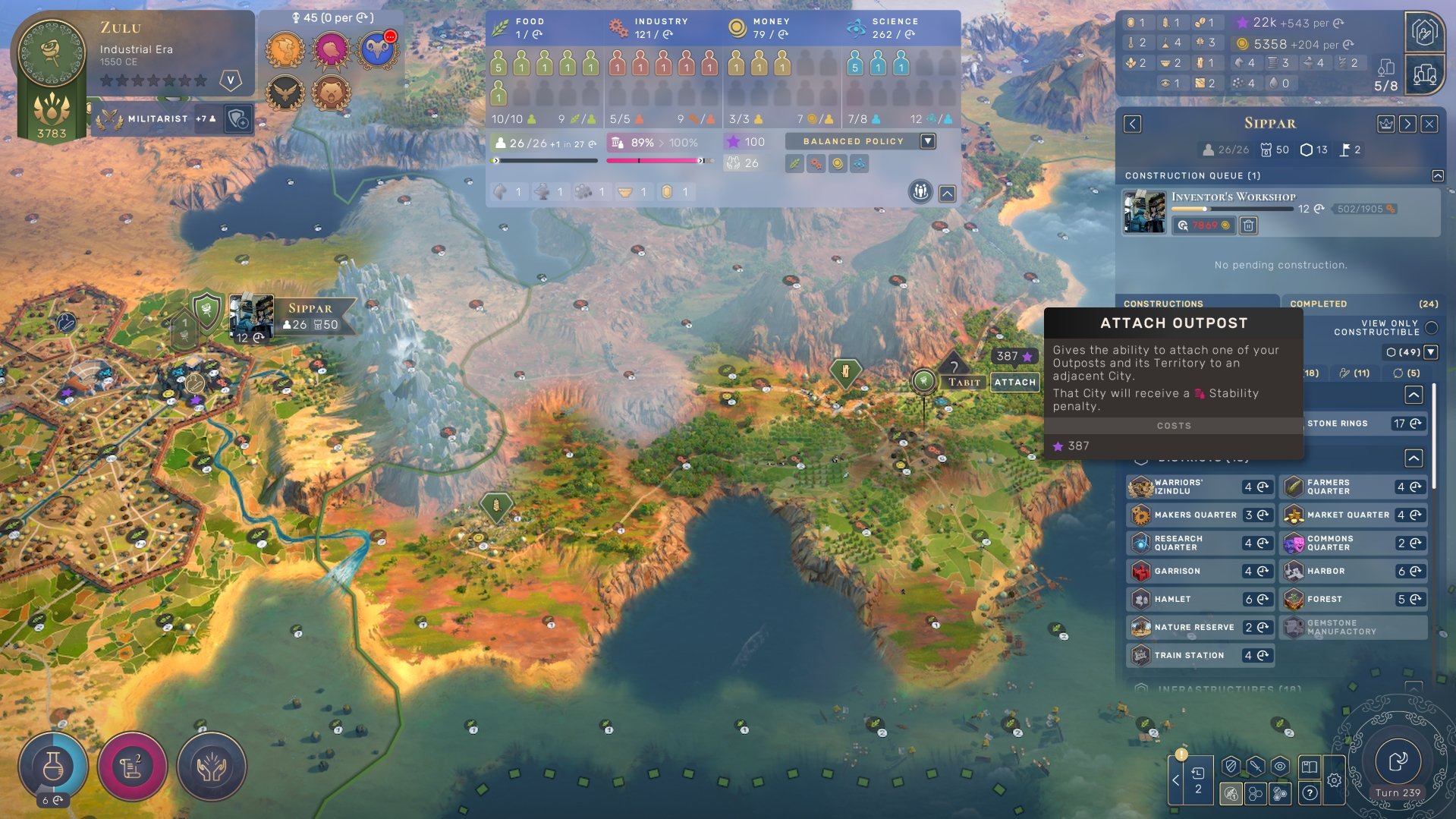 Attaching outposts is relatively easy and also instantaneous, unlike other construction queues in Humankind.

If you’re not sure how this works, here’s a quick explanation. Also, I’ll briefly go over how you can sort of downgrade cities, but not quite. First, you’ll need a city with an outpost placed in a territory adjacent to it. If the city isn’t bordering the outpost territory, you won’t be able to attach it. At which point, you may be better off creating a city there instead.

Once they’re adjacent, you can click on the city and mouse over to the outpost. This will show an “Attach” button with the Influence cost above it. Clicking this button will immediately consume the Influence cost and attach it. Whereas detaching an outpost the same way has a confirm window before completing.

Another way to attach an outpost is to click the chain button next to its’ name. This opens a window on the right side where it shows every city you can attach it to. You may want to do this instead just to see every eligible city.

How to Downgrade a City in Humankind 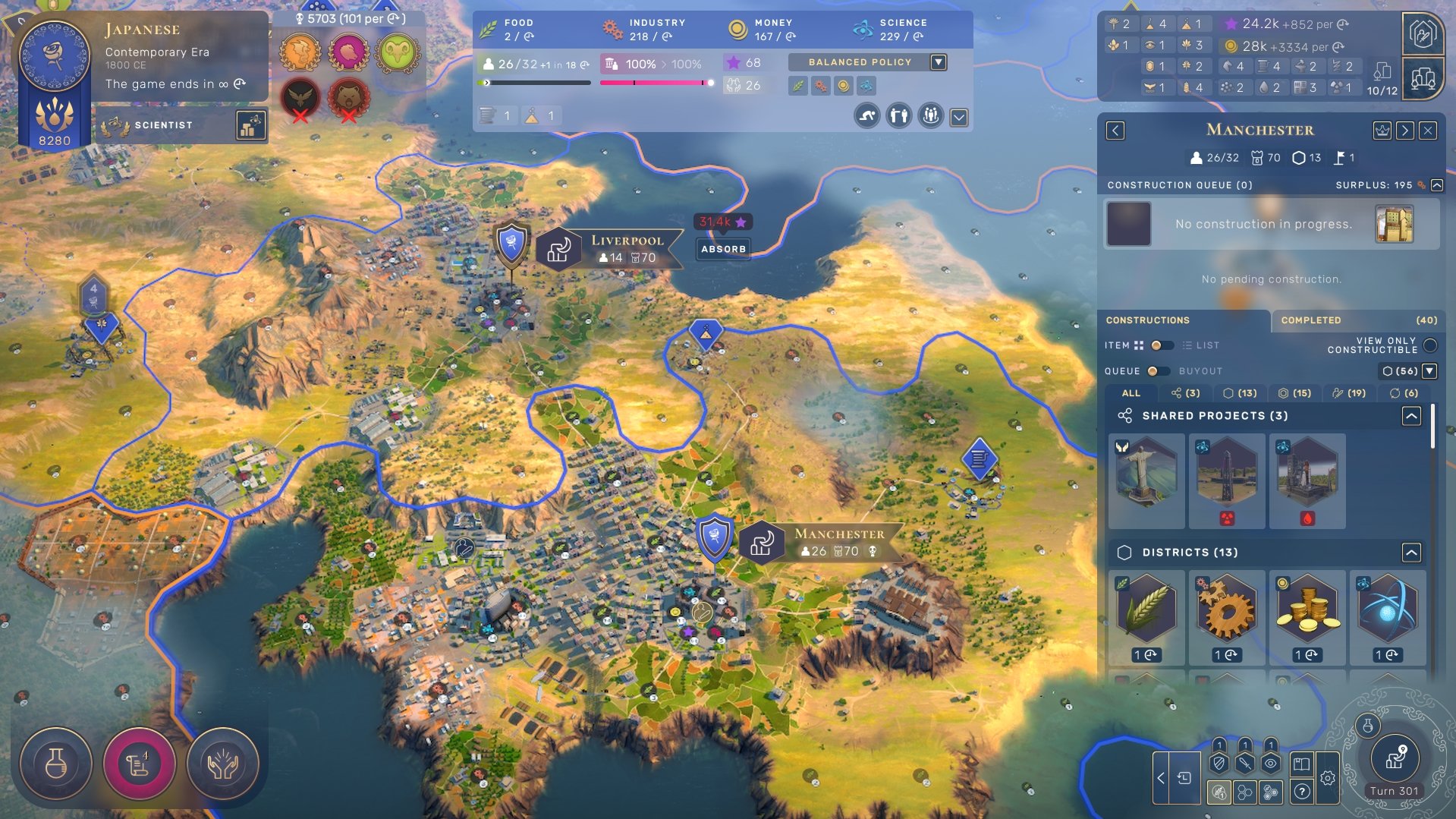 While you can’t downgrade a city to an outpost, you can still safely destroy it.

A popular question in the community is how to downgrade a city to an outpost. Unfortunately, this isn’t possible but you can still merge a city into another. This is one method to lower your City Cap if you’ve made a mistake. Also, the extreme measure you can take to get rid of a city is to ransack it to destroy it.

Keep in mind, ransacking a city regardless of whether it’s an enemy or a friendly one won’t create ruins. This means every nearby district in that territory will still exist.

That’s all there is to this guide on whether or not to attach an outpost. If you have any other questions, feel free to ask in the comments below the guide. Be sure to visit more guides below that answer common questions Humankind players have.