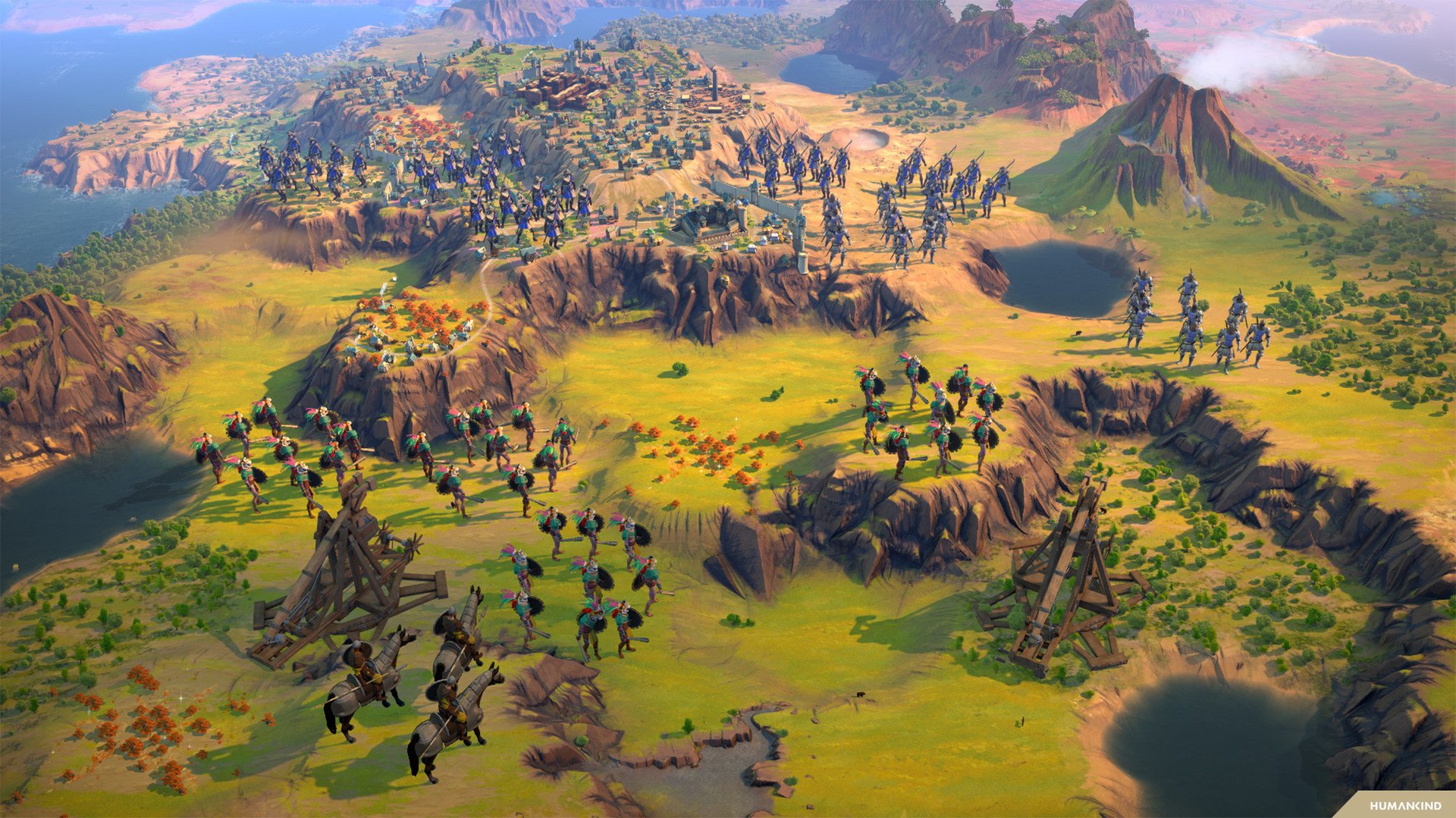 Winning a war in Humankind can be a challenge if you don’t completely understand the War Support mechanic. This feature measures how much your empire supports going to war with another empire. Also, it shows how your people feel about continuing one if you’re already in a war. This is why it’s important to understand how to get War Support.

How to Get War Support in Humankind

The more you play this 4X strategy game, the more you’ll come across different ways to raise War Support quickly. This is because there are civics and several tricks you can take advantage of. However, for those of you looking for a quick but informed idea of how it works, this guide is for you.

War Support revolves around your diplomacy with an empire and any combat engagements you have. While typically in other strategy games you’d need to be at war to fight, you don’t in Humankind. As long as you don’t have a Non-Aggression Pact, you can fight outside city borders. This includes unclaimed territory and territory only claimed by an outpost.

Each section below dives deeper into getting War Support in battle, diplomacy, and even through religion too. 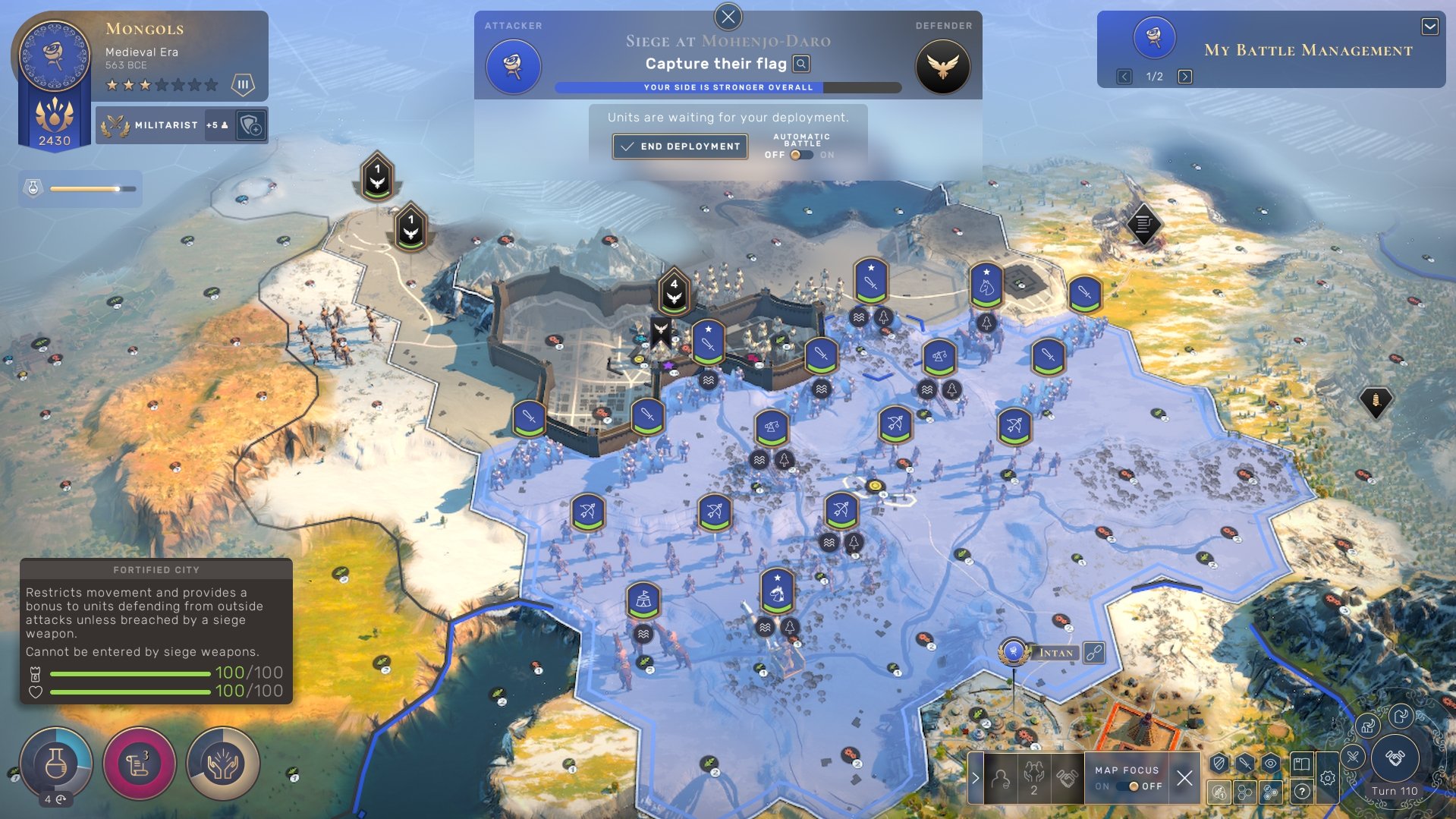 Winning battles is a quick way to instantly get your empire on board with declaring war.

Regardless of whether you’re at war or not, winning a battle is always a great way for some quick support. Unless you’re capturing a city during a war, these boosts tend to be instant at the start of the next turn. Winning a battle always provides +8 support and if the enemy retreats instead, you still get +5. If you surround an underpowered unit, you can take advantage of triggering both boosts.

Just keep in mind, if you start signing treaties with an empire, you’ll lower your default War Support. Humankind refers to the value your support balances out as the equilibrium. The best way to increase your equilibrium is by playing as a Militarist culture because they get an extra +30. This doesn’t require doing anything to take advantage of.

Militarist cultures have the biggest advantage in Humankind for people that want to conquer the world.

Militarist cultures are built toward war since they have an easier time of starting Formal Wars. This is always the better option since Surprise Wars come with penalties that lower your support per turn. With that said, sometimes it’s easier to do one over the other depending on your situation.

Surprise Wars only require 20 or more to start.

A large part of war in Humankind is also understanding how to lower the War Support of another empire. You can do this as a way to prevent them from attacking you or to win an ongoing war. Once an empire’s War Support drops to 0, the winner can trigger a forced surrender on them. Here are a few quick tips and tricks to take advantage of. 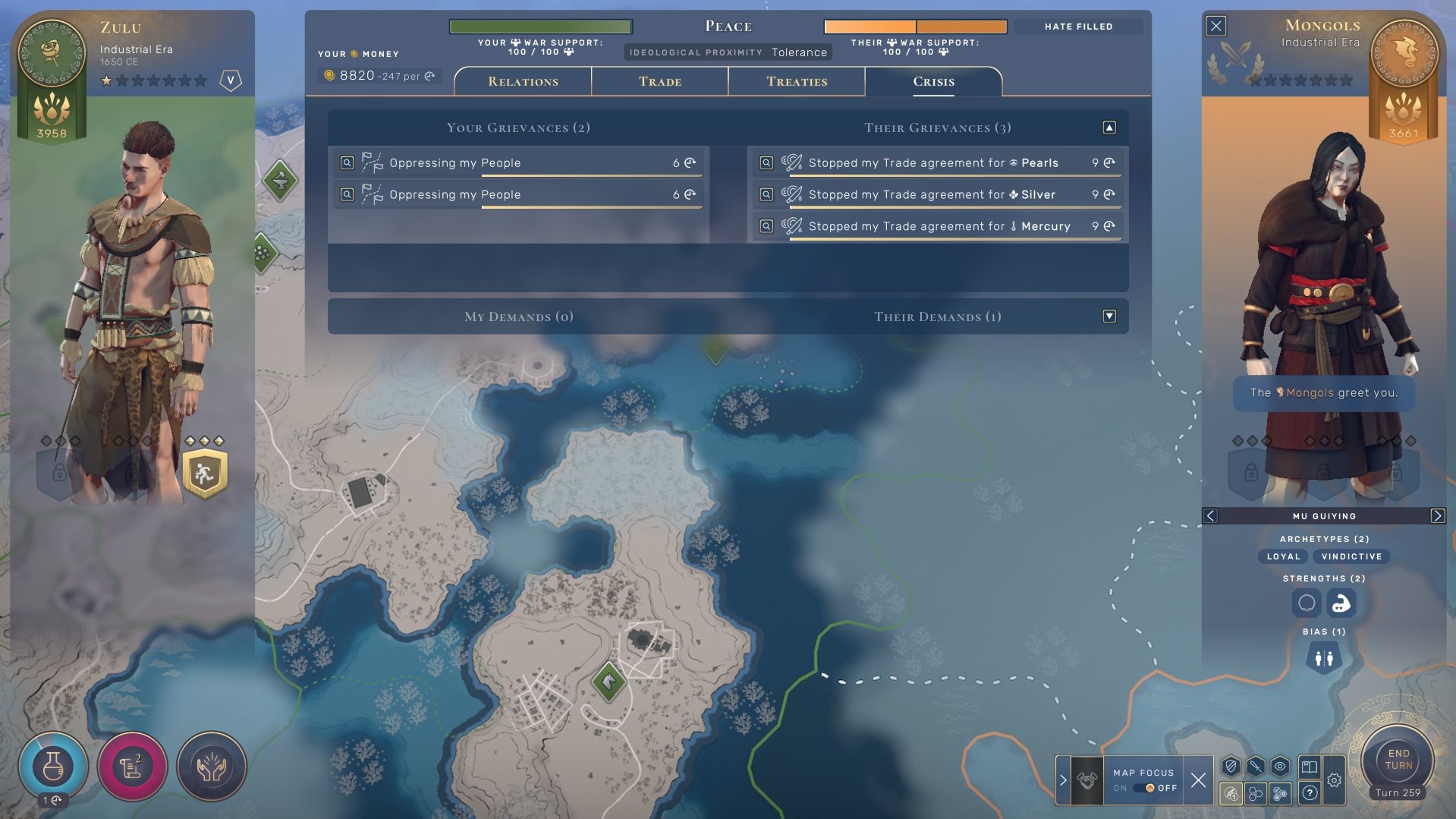 Take advantage of the grievances and demands system to shift the bar in your favor.

Preparing for war before declaring can be the best way to make sure you come out as the winner. As previously explained, if you declare a Surprise War, you’re going to have a tougher time. But, if you have the upper hand in technology, you may still be able to beat the negative penalties.

With that said, having more demands than the other empire is a good method to slowly increase your support. It doesn’t matter how many more you have as long as you have one more. You’ll gain +3 per turn toward your side. Also, if an enemy has demands against you that aren’t too bad, you can accept them for a quick boost. Accepting demands provides +10 to your side.

This means that an enemy can accept your demands for an increase in War Support as well. But they’re not often likely to unless you have a much stronger army than they do. At worst, the empire may refuse your demand forcing you to withdraw it or declare war. I recommend withdrawing if you’re trying to gain War Support since this can provide anywhere from +5 to +15.

Use Influence and Religion to Your Advantage 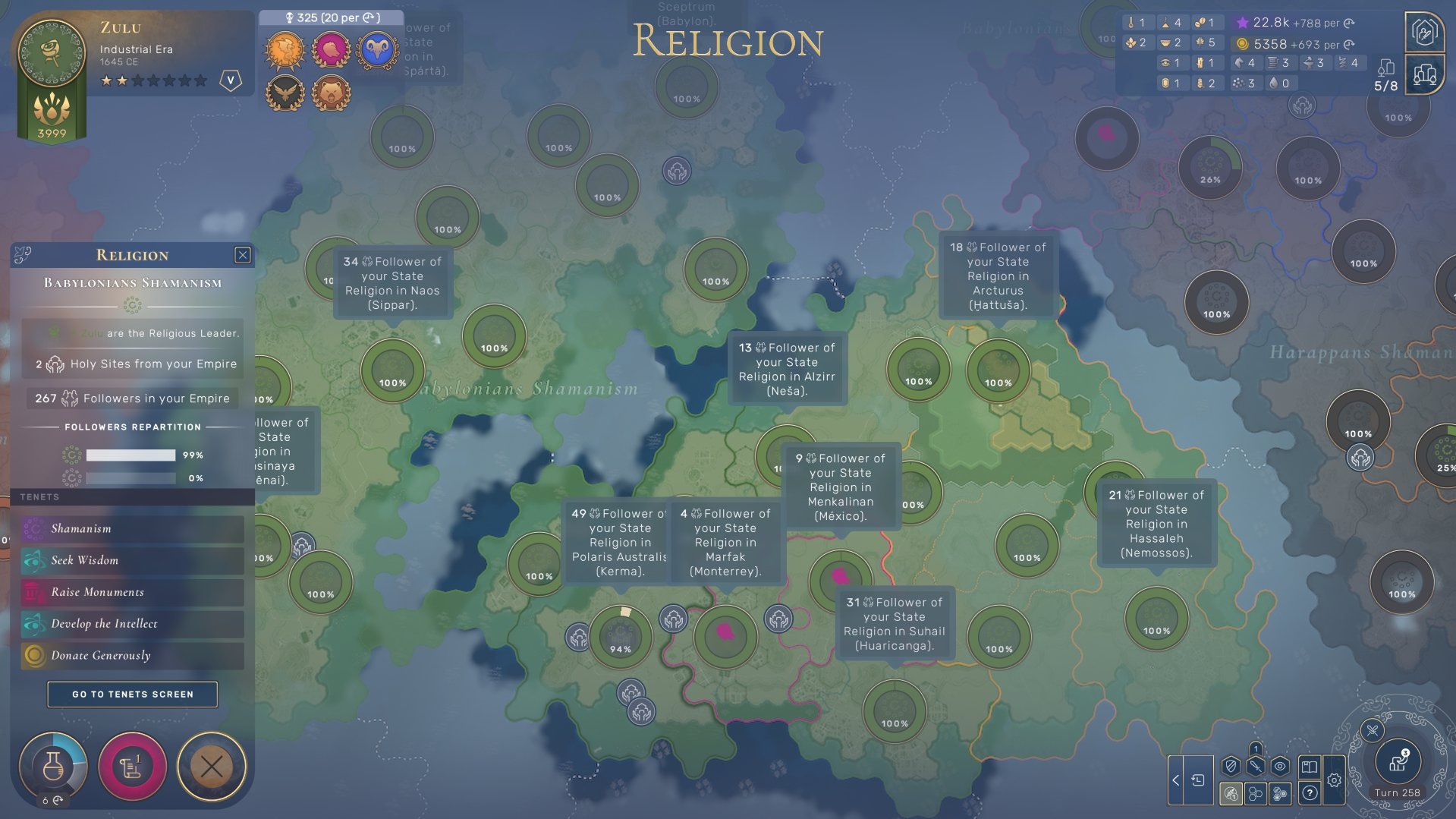 Spread your influence and religion to other cities to gain new grievances and demands.

One of the best tricks for gaining War Support in Humankind is to influence enemy cities or convert them to your religion. This will provide recurring grievances to demand until they give you that city. It gets to the point that you can almost exploit the system to max out your War Support.

Outside of combat, another good way alongside the Militarist culture is to get the Forbidden City wonder. This provides an instant +25 War Support when starting a war. If you combine that with the +30 from a Militarist culture, you’re already ahead of the game by +55. This is why the system gets a bit easier as you understand it.

Why is War Support Important in Humankind? 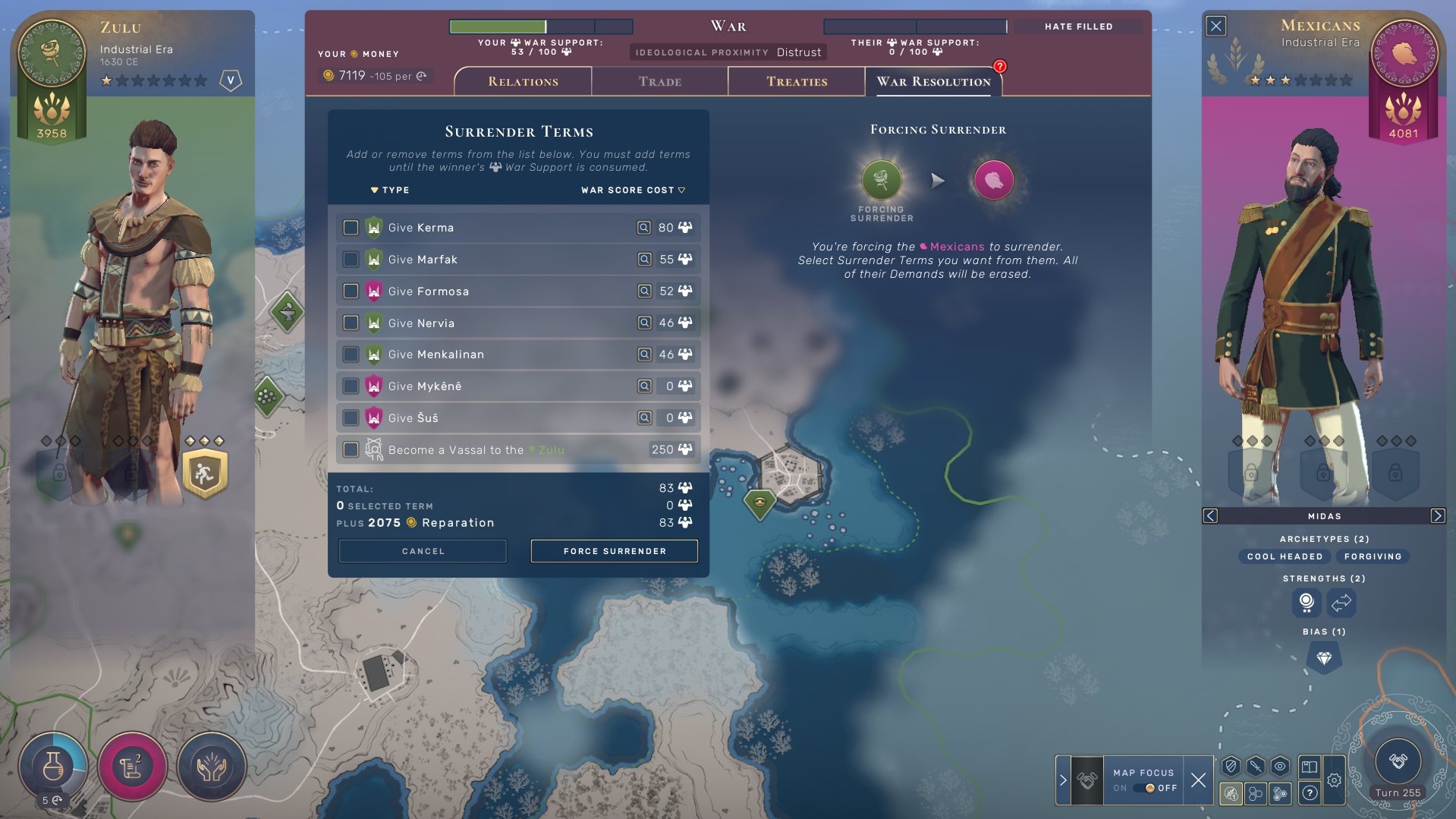 Due to the way war works in Humankind, this works as essentially a currency for claiming territory at the end.

Aside from an empire losing a war by dropping down to zero, you can also gain more rewards with high War Support. Humankind tracks your support from the beginning of a war to the end and then combines that with demands to create a value. When a forced surrender triggers, you can use that value for claiming territory and/or reparations.

While you won’t need as much War Support to claim outposts, you’ll need more for cities. And then there’s the most expensive choice to vassalize an empire into yours. This can be tough to achieve without completely taking over an enemy’s empire.

That’s all there is to this guide on how to get War Support in Humankind. I didn’t want to leave out too much information, but I also didn’t want to hit you with every single thing to know. If you have any other questions for me, feel free to comment below for help. Visit more guides below for common questions in the community.