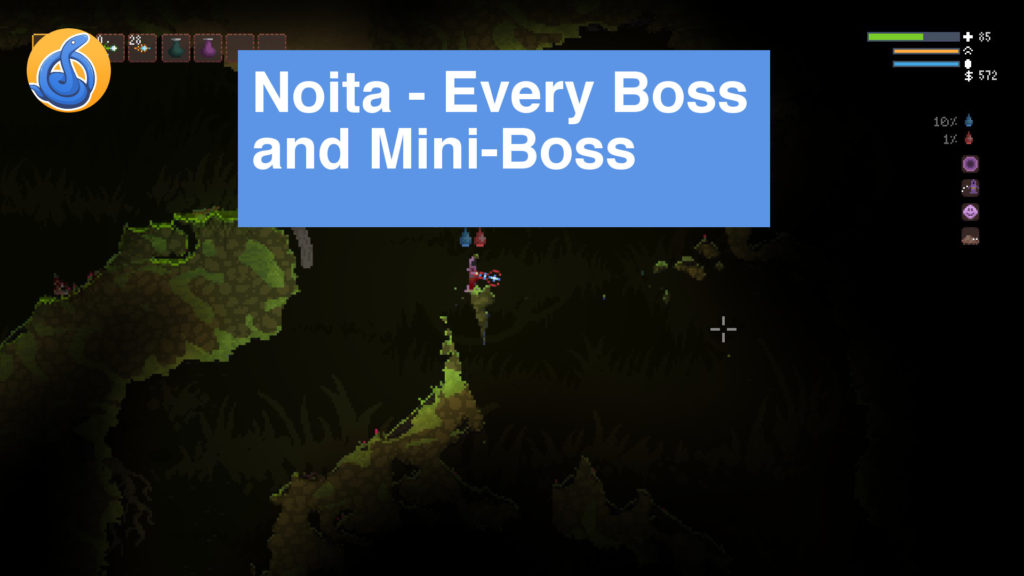 Before reading any further, know that this article contains major spoilers about the roguelike Noita. If you don’t want to see major bosses and spoilers about them, don’t continue. If you’d prefer something without spoilers, we have a guide for beginners and a Perk Tier List too. Otherwise, take a look below at the bosses and mini-bosses lurking in Noita. 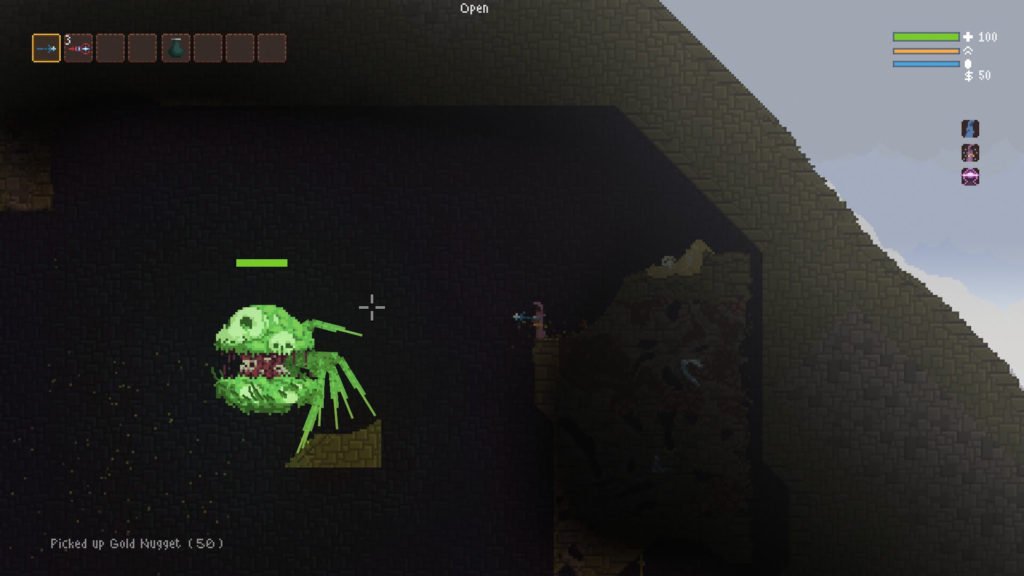 The Pyramid Boss is a creepy green spider named Kolmisilman Koipi in Noita. It always spawns in the same spot on an altar in the Pyramid area. It doesn’t attack until alerted when you get closer to it. This boss was originally summonable in this desert near a large skull. If you filled the skull’s eye with water, the spider boss would appear from above.

The spider boss is vulnerable when its’ stomach opens as shown in the screenshot above. Most spells will ricochet off its’ outer shell otherwise. 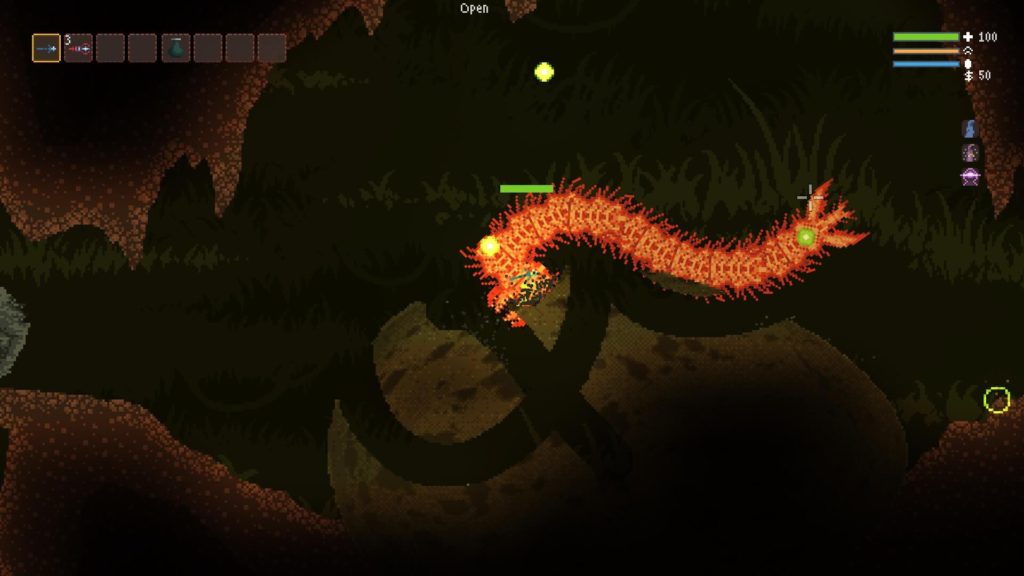 The Dragon Cave features a giant egg waiting to be disturbed. The Dragon Worm boss goes by the name of Suomuhauki in Noita. If you explore to the east wall in the Underground Jungle, a large boulder blocks the entrance into here. Once you remove the boulder, if the egg is disturbed, the dragon will hatch.

The Suomuhauki acts similarily to worm enemies that dig away terrain. Aside from constantly digging away and back towards you, it also has a deadly flame attack. 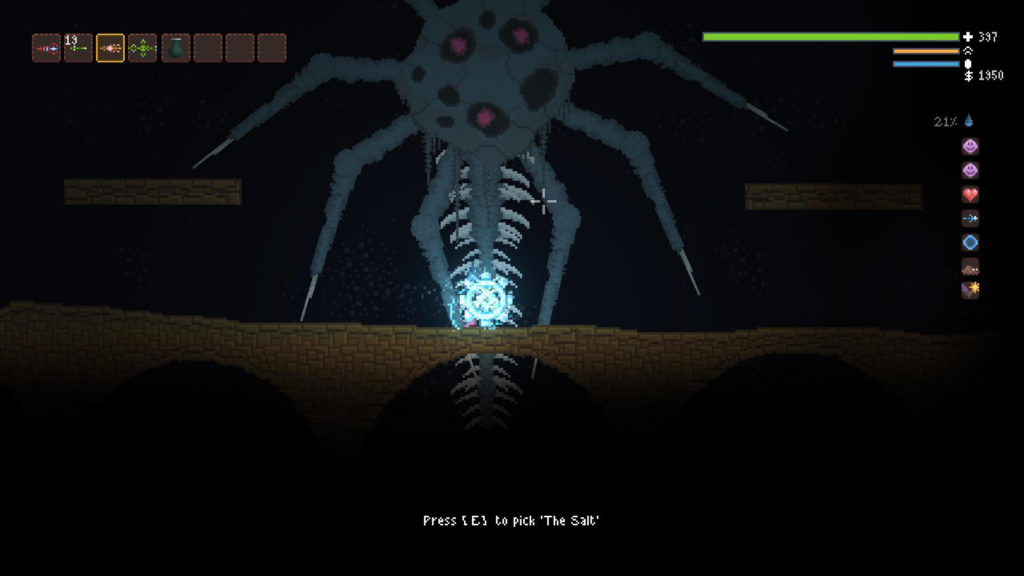 The Final Boss in Noita is a massive spider named Kolmisilma. You might be starting to notice a recurring theme with spiders and worms. Upon defeating this boss in The Laboratory, a portal appears and takes the player to the end of the game, The Work.

Many people claim this boss’s health is tied to how many orbs are collected. I haven’t tested this theory yet, but it’s widespread enough that I trust it. However, I’ve beaten the final boss multiple times without collecting orbs and its’ health was different each time. My first attempt it had 911 health and a recent one had it at 1412.

Noita doesn’t have a lot of major bosses yet and the developer will likely add more. However, there are plenty of enemies that take a lot of damage and are worth mentioning. We’ve only listed a few below and will add more over time. If you think there are any others worth featuring, comment below and we’ll do a write-up! 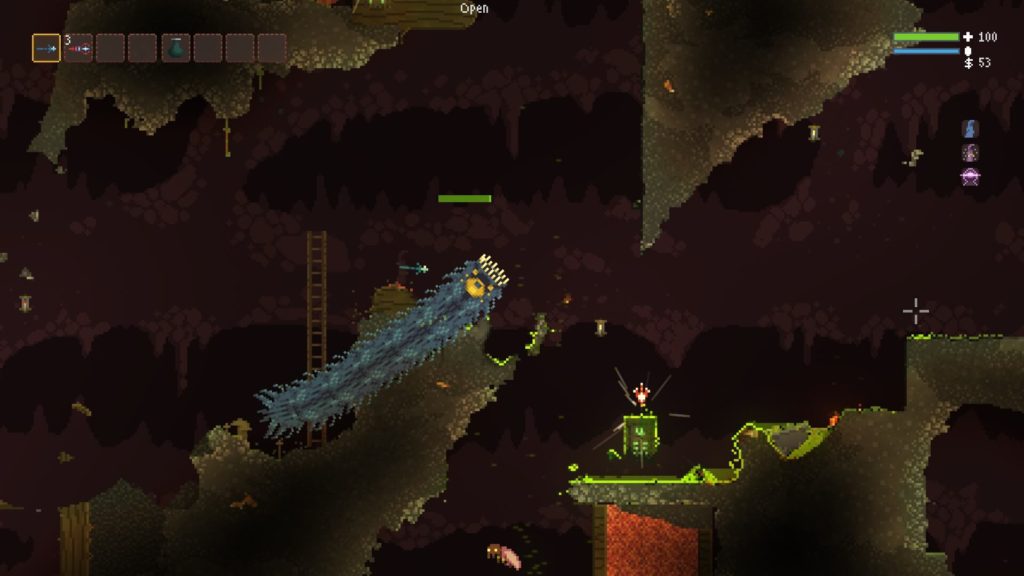 Spawn: Coal Pits and Below (Not all locations confirmed)

The Giant Worm (Jattimato) joins one of the few enemies that have a visible health bar. Running into a giant worm is one of the more terrifying moments as a beginner player in Noita. This worm and a variety of others used to create a frustrating problem where they would damage the Holy Mountain and anger the gods. 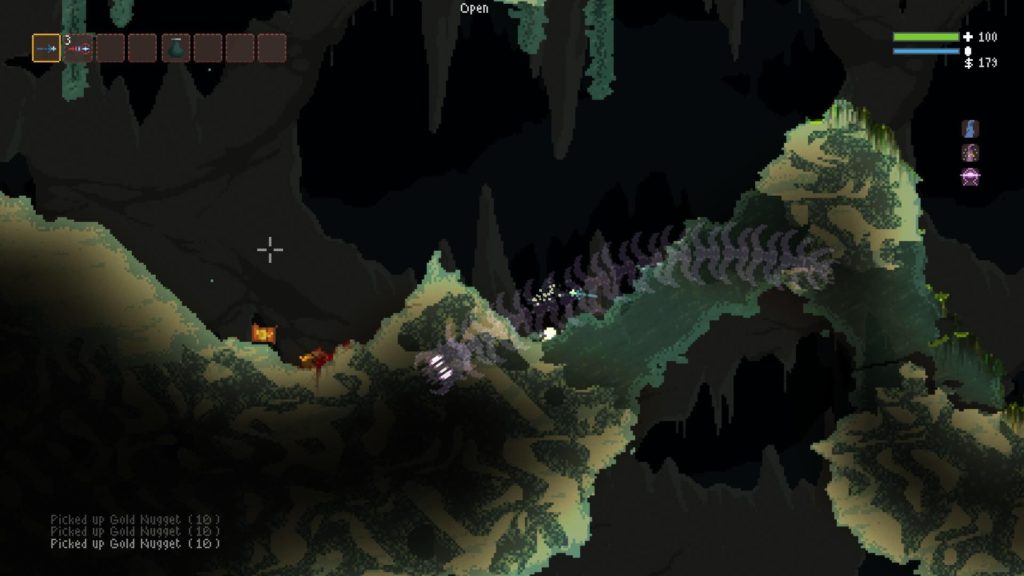 This worm was spawned for this screenshot and it does not appear in the zone shown.

Spawn: Temple of the Art

The Ghost Worm (Kalmamato) appears in the Temple of the Art zone and doesn’t dig terrain as other worms do. Unlike other worms as well, it detects invisible players and creatures. This worm isn’t common and doesn’t have a visible health bar. 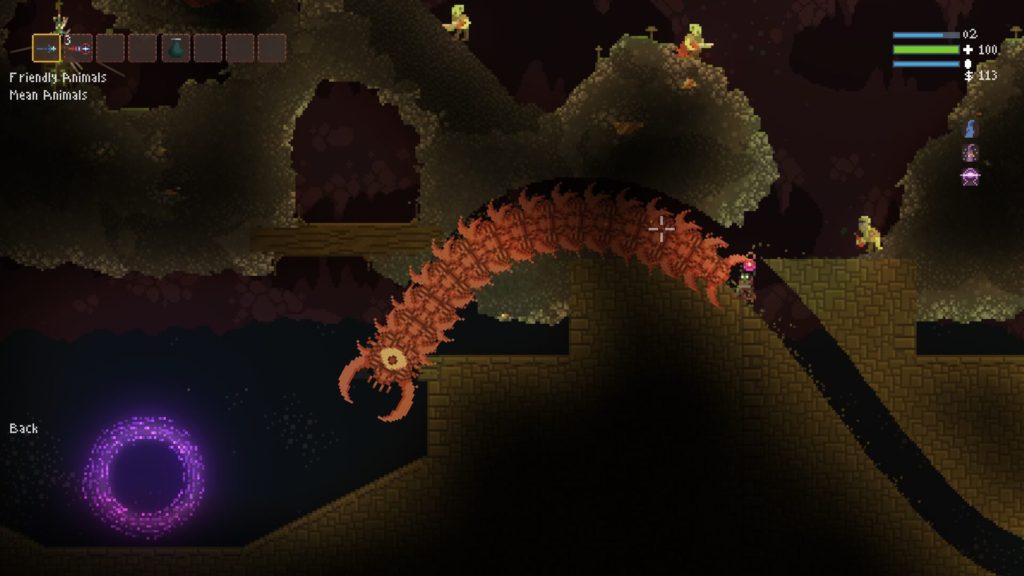 This worm was spawned for this screenshot and it does not appear in the zone shown.

The Hell Worm (Helvetinmato) appears in two difficult to reach areas in Noita. The hellish zone beneath the final boss known as The Work (Hell) and the sky area also referred to as The Work (Sky). 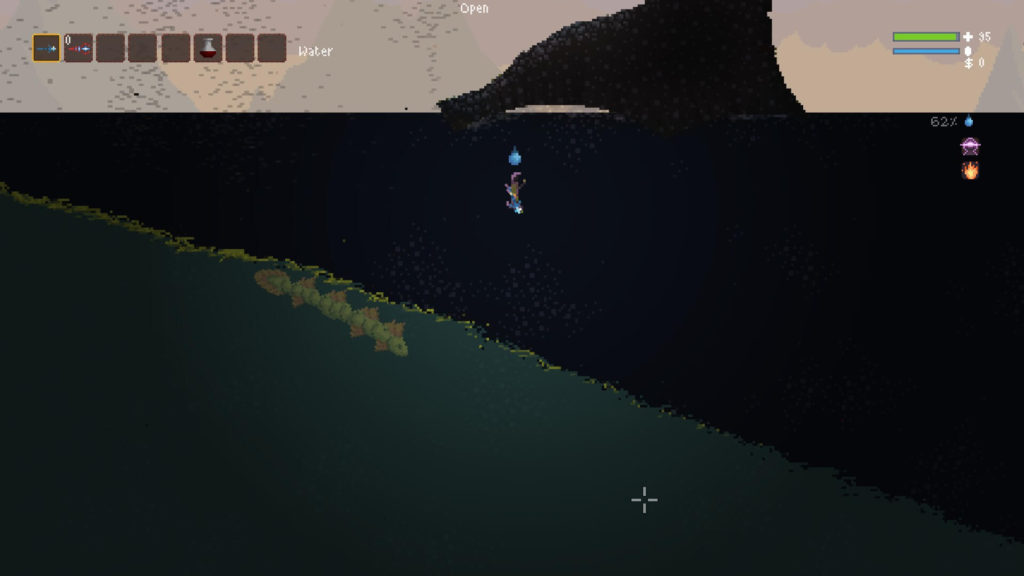 The Nahkiainen Lake Worm adds to the list of worm-like creatures in Noita. This monster pursues any prey that enters the massive Lake biome on the west side of the world. They bleed worm blood similar to other worms. 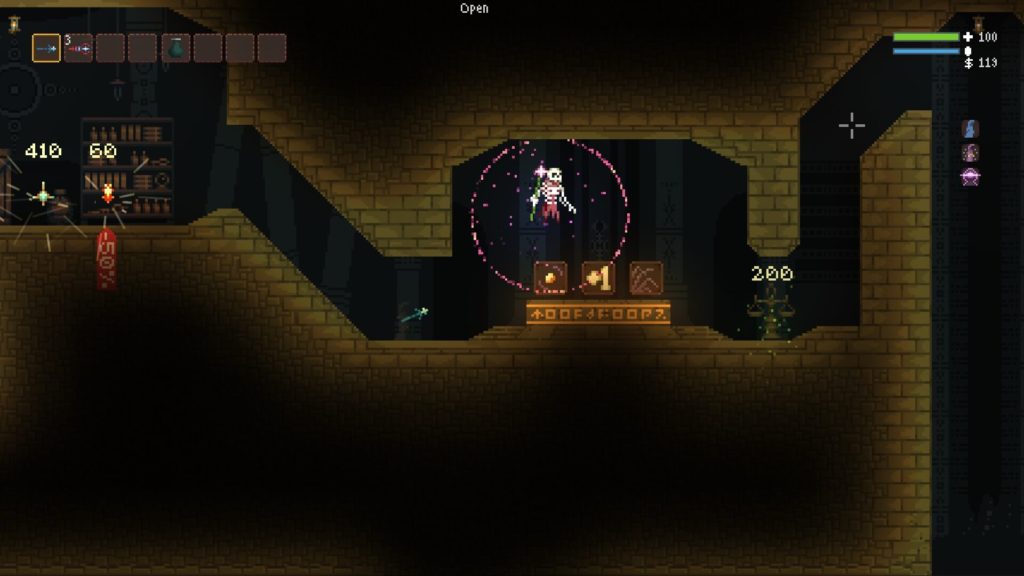 The Stevari only appears from angering the gods or by using the chaotic polymorphine liquid. Despite having no visible health bar, the Stevari is a frustrating enemy because of their strong spells and quickly recharging shield. As long as you don’t damage the Holy Mountain area significantly and an enemy doesn’t either, you won’t run into them. However, the Worm Crystal update doesn’t completely repel worms or Lukki spiders from damaging Holy Mountain.

The No Worm Destruction mod in our Best 15 Noita Mods article removes all damage from worms and Lukki spiders.

If you have any tips or bosses you’d like added to the article, comment below and let us know.

Go into each boss fight with the best perks available by taking a look at our Noita Perk Tier List.