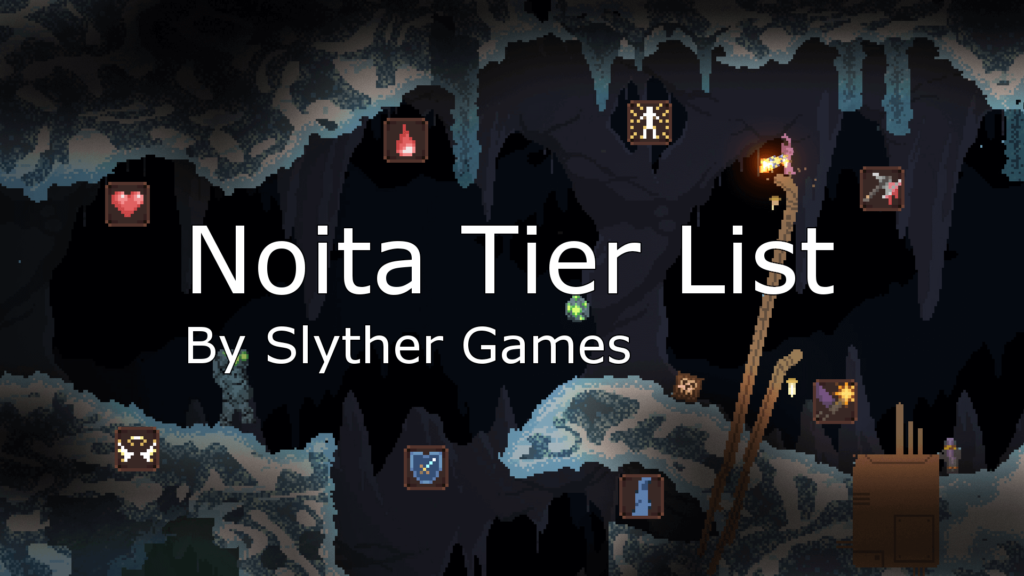 If you’re looking for the best perks to use in Noita, take a peek at our Perk Tier List below. This guide uses my personal experiences with each perk and how I feel about them. Each of the four tiers on the tier list shows what perks are included with short explanations below them.

If you have any criticisms on the position of a perk, drop a comment below and let me know why. I’ll consider moving the tier list position with the right feedback. 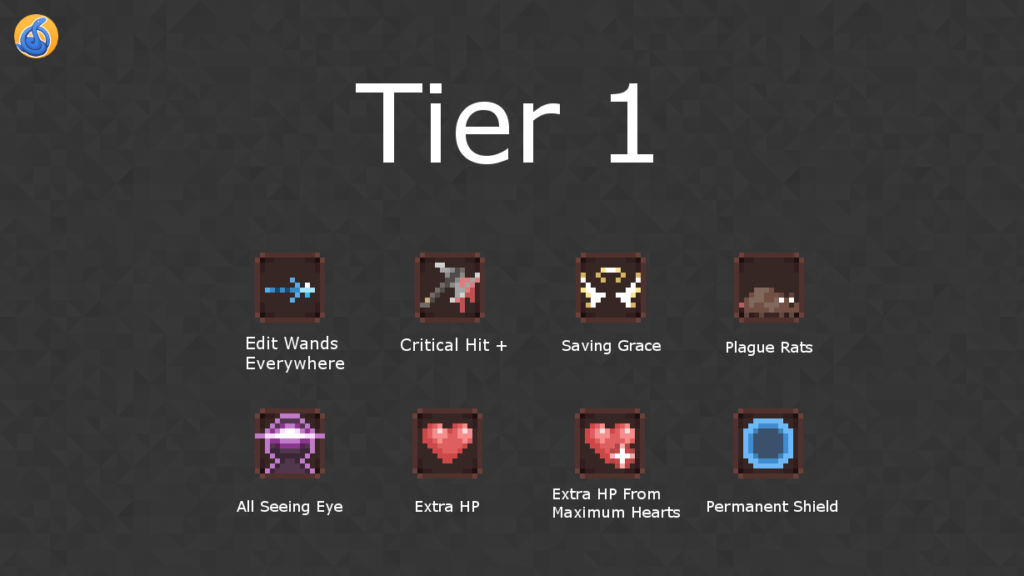 Tier 1 perks are the best to grab if you ever see them. These perks will make your survival much more likely.

Further information on each perk’s position is below. Each perk is in order of rank below:

Extra HP – An extra 50% health boost is nothing to shrug at. Getting hit by enemies is often inevitable and Extra HP helps make you tankier.

Permanent Shield – The Permanent Shield perk is a nice way to reflect small projectiles. Occasionally a shot gets through, why not be prepared for it? Combines well with Projectile Repulsion Field.

Edit Wands Everywhere – Not being limited to editing in Holy Mountain opens up the potential for greater spell combos. Plus, you can take spells from wands you find, even if you’re full of wands.

Saving Grace – Saving Grace prevents dying from massive damage, regardless of what it is. So long as you’re not taking consistent damage, you’ll drop to 1 health and have a chance at surviving.

Plague Rats – Rats are no longer hostile and the ones that appear from dead enemies are strong. One dead enemy is a good way to start a chain reaction of Plague Rats for killing other enemies.

Critical Hit + – An increased critical hit chance is great for dealing more damage when you really need it.

All Seeing Eye – Knowledge is power in roguelike games. The All Seeing Eye makes it easy to see any potential dangers and/or opportunities. 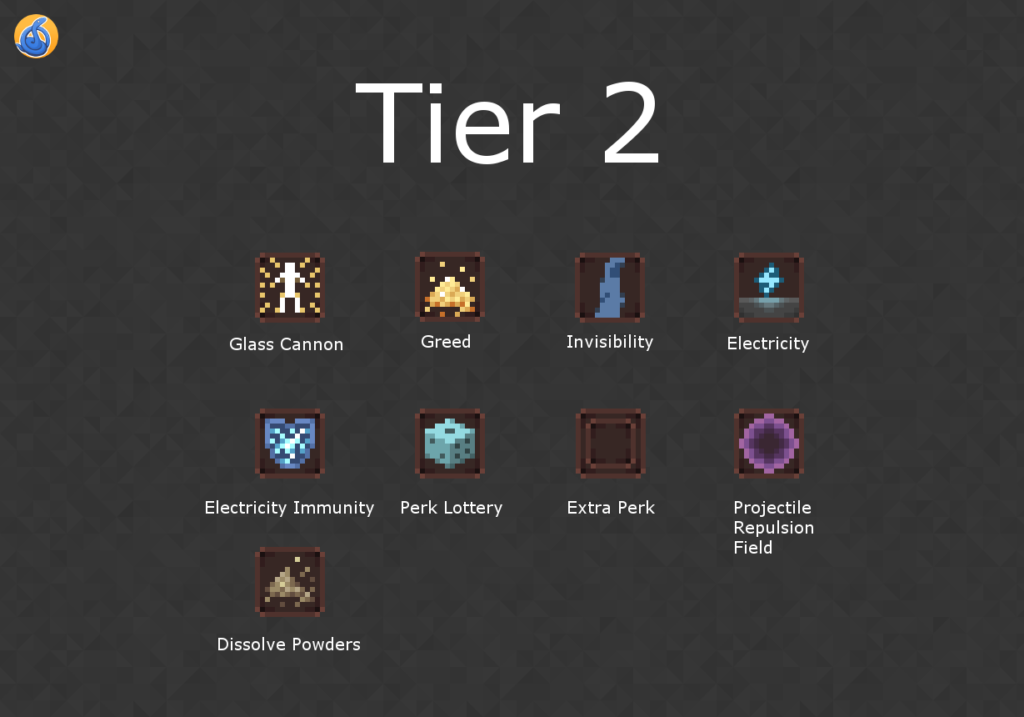 Tier 2 perks are a nice alternative if no Tier 1 perks are available. These may require a little skill to be used efficiently without dying.

Greed – This perk is close between Tier 1 and Tier 2 as it depends on the player. Gaining double gold from nuggets is a nice way to afford more expensive wands and spells. However, if you’re a patient player or take advantage of mining, money is rarely an issue.

Projectile Repulsion Field – This would be Tier 1 if it didn’t increase damage from projectiles by 26%. However, it repels most shots from getting through.

Glass Cannon – This is a high skill perk since it completely changes your run. Dealing 5x damage is an incredible bonus. However, being limited to 50 max health and larger blast explosions can make death likely. Hearts used to push the 50 max health, but they no longer do.

Electricity – High skill perk that can lead to accidental deaths, but also kills plenty. Electricity Immunity is provided with the Electricity perk.

Perk Lottery – This perk is a literal hit or miss to have that can hurt you more than help you, while vice versa as well. Getting three perks or four if you have Extra Perk active can be incredible.

Extra Perk – This is an investment since you’re passing on a perk when you take it to have more options later.

Invisibility – Invisibility is in between Tier 2 and Tier 3 since it doesn’t serve a huge purpose aside from playing stealthily. I won a Noita run by simply avoiding enemies that were too difficult.

Electricity Immunity – Electricity leads to a quick death if you don’t see it, and still sometimes when you do. 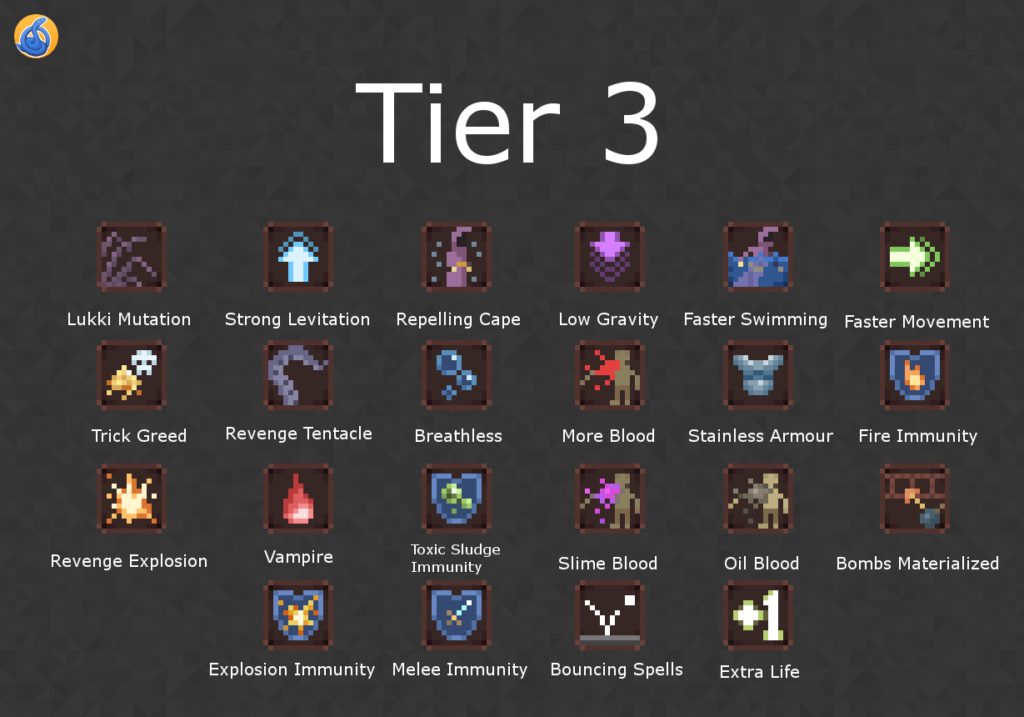 Tier 3 perks are rarely good alone unless they’re for a specific situation.

Strong Levitation – It’s useful having a larger levitation bar despite needing to recharge the full bar as well.

Vampirism – This is one of a few ways to heal in Noita despite losing one-third of your max health. This perk benefits from More Blood to have enough blood to drink. Otherwise, a lack of blood to drink can outweigh Vampirism’s usefulness.

Revenge Tentacle – The tentacle does a nice chunk of damage, but it requires you to get hurt. I’ve never been a fan of perks in games that require getting hurt.

Explosion Immunity – I put this immunity highest because it will always be an issue. Whether it’s from a misfire of your own or an enemy. This makes it easier to fight close to enemies with explosive spells and works especially for Nightmare Mode.

Melee Immunity – Immune to all melee damage from enemies. I never try to get close to enemies, but some attacks slip through when you’re in a panic. This helps deal with that and potentially caters to certain playstyles.

Toxic Sludge Immunity – Toxic sludge is extremely common in The Mines, but you’re still likely to run into it later too. Not a huge priority since it’s easy to wipe off with water too.

Stainless Armour – Taking 50% less damage if you don’t have an active stain is a nice modifier. However, it’s difficult to not have a stain unless you use Stainless Armour with the Repelling Cape.

Fire Immunity – Fire is common early on similar to Toxic Sludge making the immunity nice to have. However, it’s easy to put out with water and shouldn’t be a high priority perk to have.

More Blood – More Blood is primarily worth getting if you already have Vampirism. It synergizes well with Vampirism for regaining health. Aside from that, you’re wasting your time.

Slime Blood – The major benefit of bleeding slime is gaining 40% projectile resistance from slime. However, that requires you to have slime on you and that goes with getting hurt.

Oil Blood – Bleeding oil is dangerous because of the negative effects, but it also grants 40% explosive resistance. I’m not a fan of the ground becoming slippery and increasing your flammability.

Lukki Mutation – The major disadvantage to the Lukki Mutation is having no jetpack/levitation unless a leg is attached to a wall. Otherwise, it’s good for close-quarters combat despite hitting explosive hazards too.

Extra Life – It’s difficult keeping Extra Life in Tier 3 as opposed to Tier 4 with how frequently you die after coming back. Extra Life suffers from the same problem as Saving Grace where you survive with 1 health in the same spot. Consistent damage will still kill you.

Trick Greed – Unless you aim for accidental kills, you won’t get much use out of the 4x gold drop.

Bombs Materialized – Functions as another wand slot for bombs exclusively. Nothing significant or game-changing here.

Faster Movement – The speed buff on this perk is so minimal it’s not worth getting.

Faster Swimming – The speed buff on this similar to Faster Movement is also too small to be worthwhile. Faster Swimming is limited to a few situations where it’d come in handy as well. 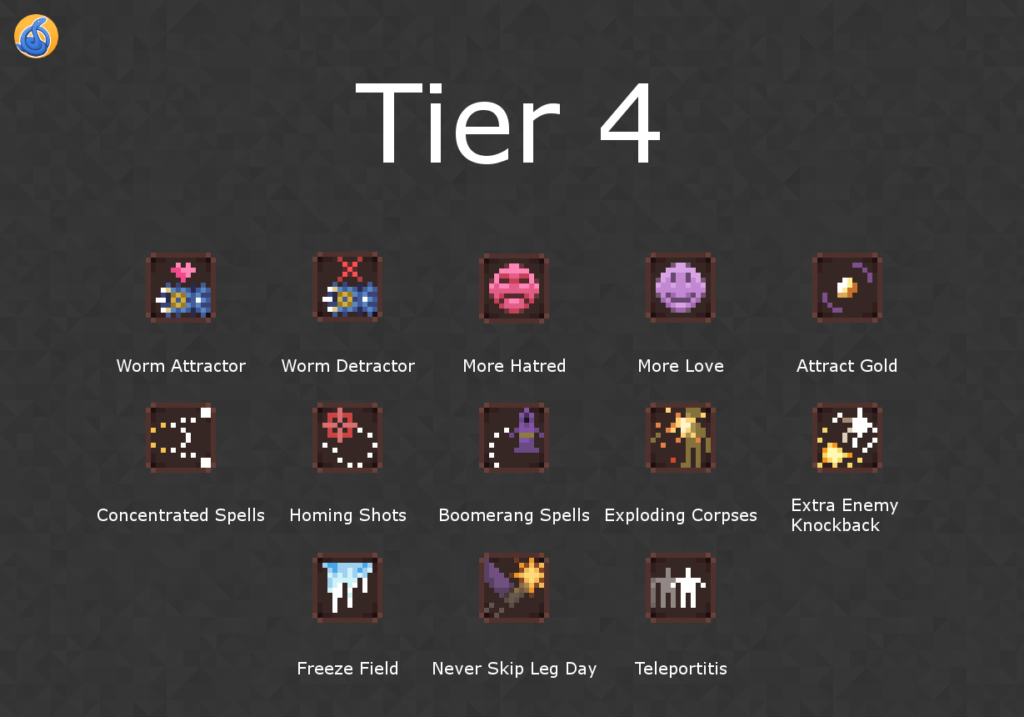 Unless you have a really good reason, tier 4 perks are mostly worth passing on. That doesn’t mean they can’t be useful, it just means there are better perks to choose.

More Love – A peaceful world is a safer one.

More Hatred – The chaos of more enemies fighting leads to extra money and fewer enemies in your way. However, there is a disadvantage in losing money from enemies dying off-screen.

Extra Enemy Knockback – Knockback is a good way to push enemies away, rather than to kill them. Spells require more aiming when enemies are constantly getting pushed away.

Attract Gold – Having a gold magnet is a small quality of life change for when gold disappears right as you get near it. However, it doesn’t serve much purpose aside from safely gathering gold in hazards like toxic sludge.

Homing Shots – Projectiles rarely function well enough with Homing Shots for it to be worth it. Your projectiles are more likely to hit the ground while trying to home toward enemies as well.

Freeze FIeld – Freezing all liquids prevents gathering them and frequently gets your character stuck. I don’t have a strong reason for using Freeze Field aside from crossing wide areas of liquids like water or lava.

Worm Attractor – This is only worth getting if you’re hunting large worms for gold. Also, it’s worth destroying Worm Crystals if you grab Worm Attractor.

Teleportitis – 20% less damage is a high reduction, but random teleportation is an easy way to an instant death too.

Exploding Corpses – If the explosion size is ever buffed, this tier list position could change. Currently, however, corpses barely explode.

Never Skip Leg Day – Low kick knockback increase that’s barely even worth it for barrels. The damage increase from 1 to 4 is abysmal too.

Boomerang Spells – I haven’t had great experiences with Boomerang Spells as they limit the range of many spells. However, if you find a creative way to use it, post a comment below.

Worm Detractor – I barely run into worms even without this perk. For a beginner player, Worm Detractor still isn’t worth taking. Unless the alternative perks will get you killed.

If you’re still new to Noita, be sure to take a look at our 10 Best Beginner Tips and Tricks.

Boomerang Spells is fucking amazing with chainsaw, as it turns it into a ranged, very high DPS weapon. Can't recommend using other spells with it, lost a run to being chased by an explosive crate I summoned when I forgot I had the perk, but if you have chainsaw it's a run winner

The Explosive Corpse can now be set in Tier 2 or 3 as it also gives explosion immunity.

It's 2021, and I must say that there's a new perk that certainly belongs in Tier 1: Unlimited Spells. The crazy things you can do when you have, say, unlimited magic missiles, in amazing...

I would say that concentrated spells is decent, but only under specific circumstances. I had one run where I found a wand with six light beam spells that all shot at the same time, then picked concentrated spells, and I basically had a 60 damage laser that could one-shot quite a few of the early enemies.