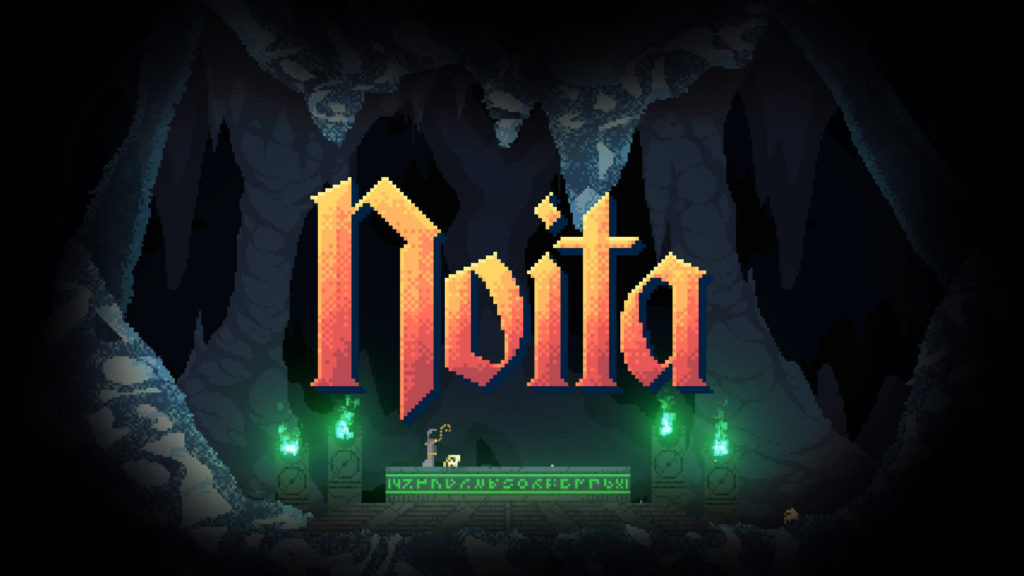 If you’re struggling to survive in Noita, we have the 10 best beginner tips and tricks to get you started. Noita is another great entry to the roguelite genre and it certainly finds unique ways to end every run. There’s no need to make it more difficult when there are simple tips and tricks to make the early game a little less frustrating!

Tip 1 – How Do Spells Work in Noita 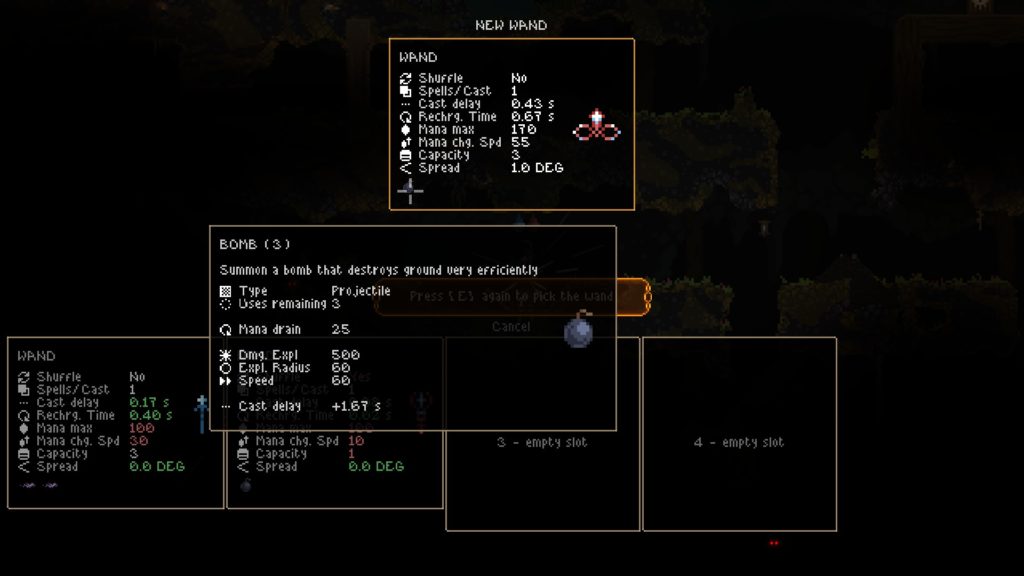 Weapons in Noita are wands with individual spells on them that make up your attacks. The first two wands at the beginning of every run are one that shoots Spark Bolts and the other drops bombs. Spells each have their own unique projectile combined with modifiers to the wand they’re attached to. These modifiers can change how fast a wand shoots, how much mana it has, how large the spread is, etc.

Understanding the different spells in Noita is how a player is most successful. Certain wands may have terrible spells on them, but great stats on the wand making it useful for other spells. This is where Noita gets interesting and more complicated as you mix and mingle spells with different wands to create the best weapon.

There are two ways to edit a wand in Noita. The Holy Mountain shop in-between floors is a safe area where wands are editable before leaving. Otherwise, you need the Edit Wands Everywhere perk recommended in Tip 7. As the perk says, wands are editable everywhere allowing for adding and removing spells on the fly. 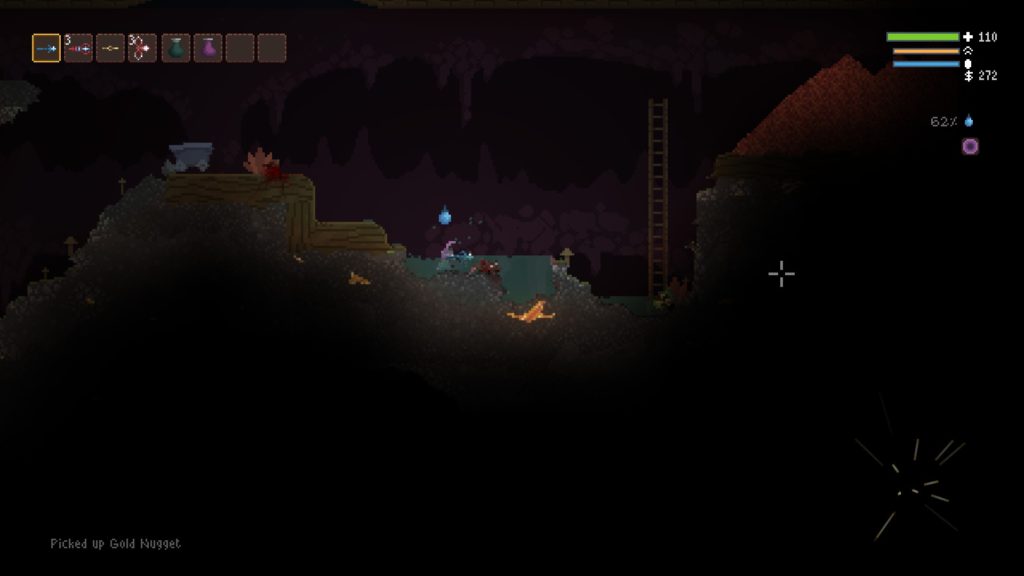 Ducking down into any liquid will make your character try to drink it. The default key for ducking in Noita is “S”. This is especially useful for people that take the Vampirism perk. This perk sacrifices one-third of your max health for regaining health by drinking blood. Another reason to drink a liquid in Noita can be to remove it.

If you want to drink from a liquid inside a flask, you need to pour it out. Similar to ducking into a puddle to drink it, you’ll need to create a small pool of the liquid.

It’s easy to play Noita without realizing how flasks work. An important tip to know is how to fill a flask. They can contain almost any liquid and element by immersing your character into it with the flask in hand. However, there needs to be room available for whatever liquid you’re trying to collect. This can lead to flasks containing more than one liquid in them.

The shop in between levels (Holy Mountain) with perks is a good opportunity to refill a flask with water. Another tip is ducking into shallow puddles to collect more with your flash. However, it might also drink the liquid too.

If you want to get creative, every run has a few recipes to create a special potion. It’s a constantly changing combination of liquids and can lead to recipes like healing. This is the hidden alchemy side of Noita.

Tip 4 – How to Get Health in Noita 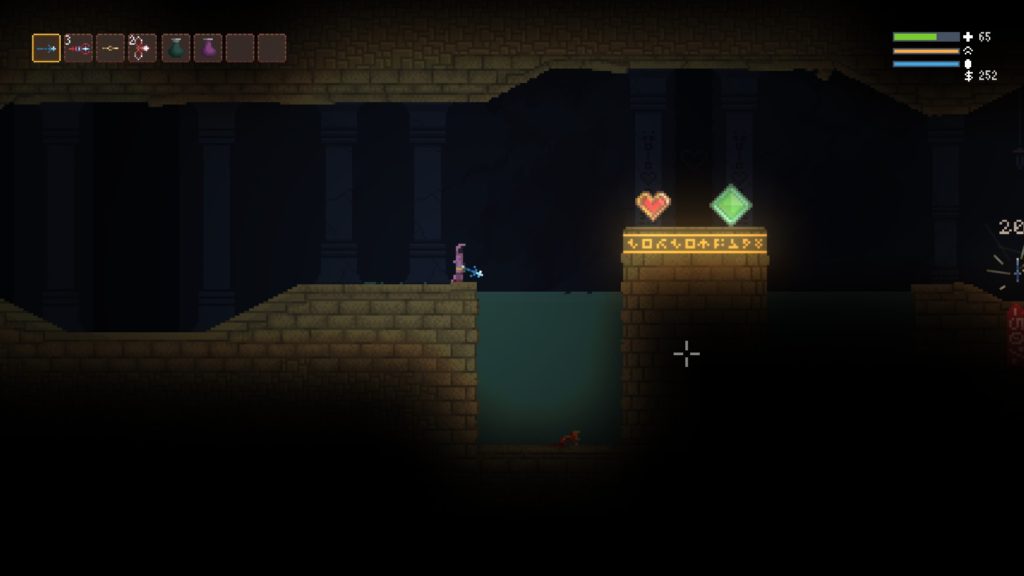 There aren’t many ways to get health in Noita aside from regaining it in-between zones. For beginner players, the best way to get health is to look for giant health upgrades on each floor. These will increase your maximum health and give some health as well. Otherwise, perks that benefit your health are in the list below:

It’s important to know that certain perks will reduce your health instead of giving you more. For example, Glass Cannon caps your maximum health to 50. You used to still be able to increase it from there, but a recent update changes this. 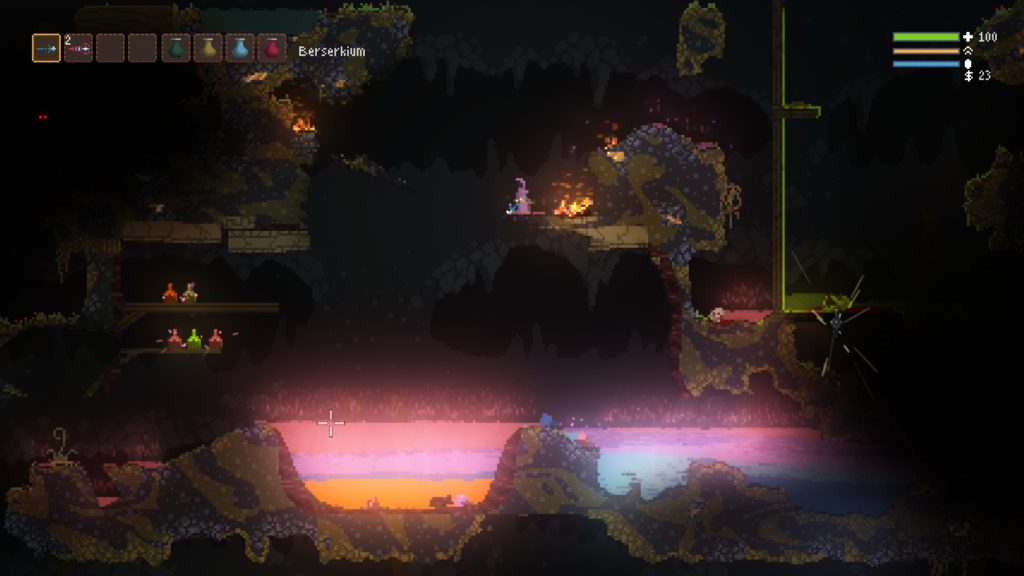 Something that makes Noita stand out from other roguelikes is that there’s no rush. Spelunky is an example of a roguelike where if you take too long in an area, an invincible ghost comes to kill you. However, in Noita, there’s nothing to prevent you from staying in an area for hours on end.

The early floors in Noita are easier than the deeper ones. For both beginner and advanced players, if you have the patience, it’s worth fully exploring them. This is a good way to rack up a good chunk of money and potential health upgrades. You’re likely to find more wands and spells as well.

Worst case scenario if you start getting low on health, head to the bottom of the area as fast as you can to get health in the Holy mountain. 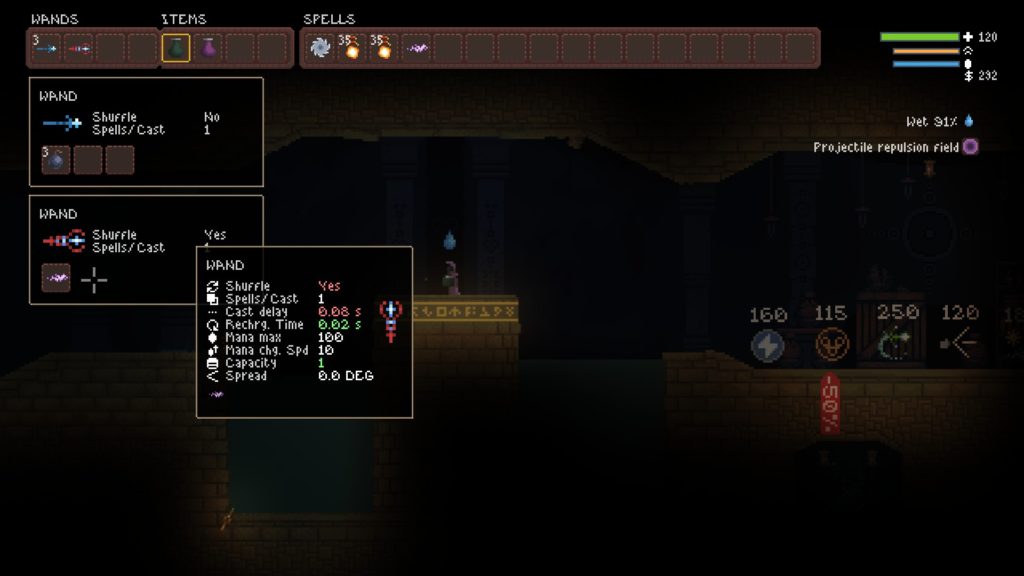 This is a neat trick I picked up off the Noita subreddit for a strong wand early on. You can’t edit the spells on your wand until you reach the first Holy Mountain shop, so this doesn’t help until then. However, the starting bomb wand has a low cast delay and recharge rate. If you switch the bomb with your other starting wand spell, Spark Bolt, it becomes a fast machine gun.

The low cast delay is essentially a fast fire rate and the quick recharge rate is how long it takes to restart the spell cycle. After using every spell on a wand, the recharge rate kicks in. For the bomb wand, the low cast delay and fast recharge rate combine to create a rapid-firing weapon early on. It’s important to know you can run out of mana at a decent speed if you don’t take pauses in-between firing. 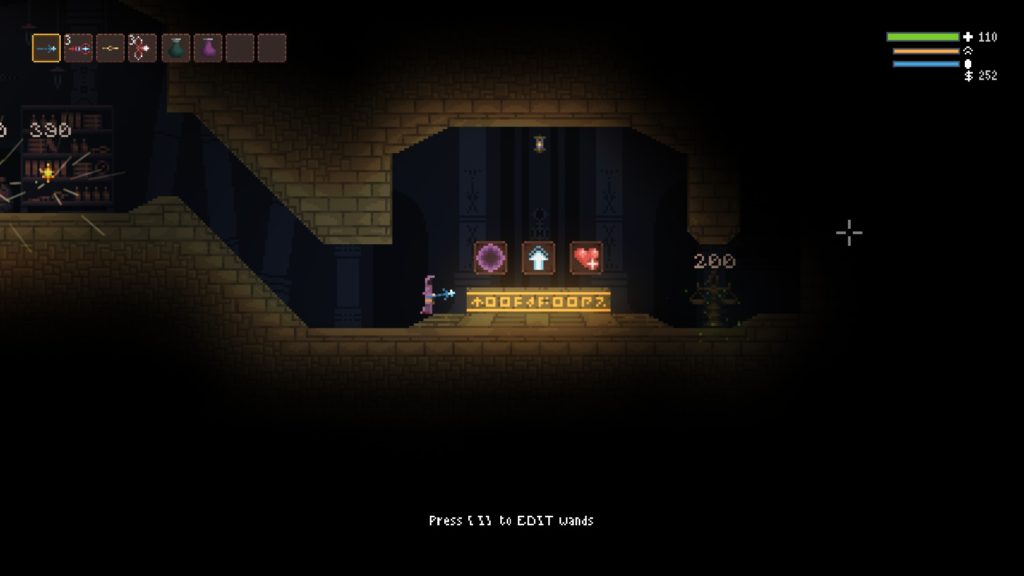 Noita always has three random perks in between floors that players can choose one of. Unless you get the Extra Perk, perk, it only has three. This makes it so four show from then on. Nevertheless, there are perks that make it easier to end a run and ones that don’t serve much of a purpose. Learning what works best is frustrating as the only way to know aside from looking online is trial by fire.

I’ve listed some recommendations below, but you can also visit our full Perk Tier List for even more information. Make sure to check the perks to avoid listed further down as well.

Tip 8 – Water Rinses Off Other Liquids 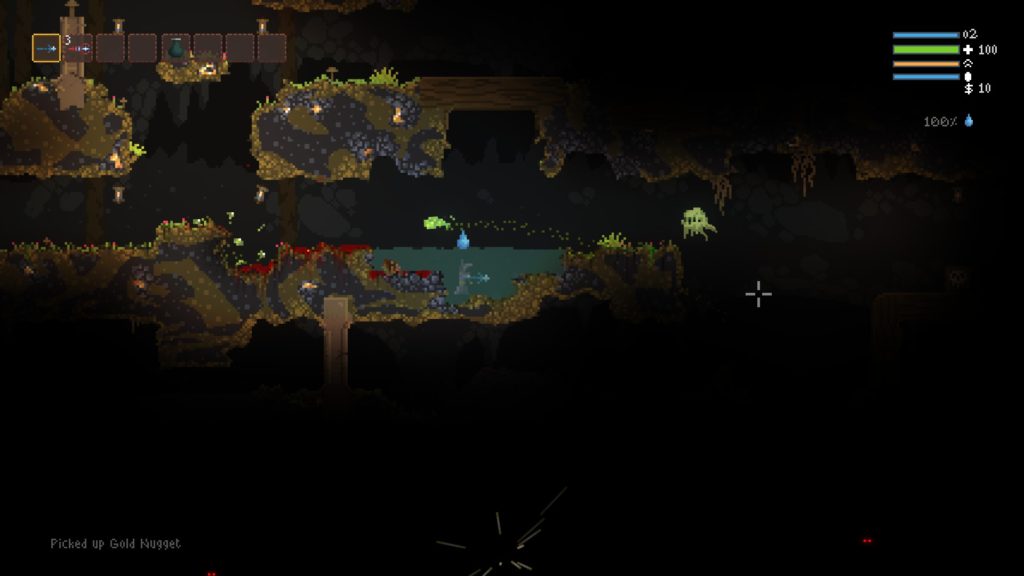 Every run in Noita starts the player with one flask filled with water. This is important to take advantage of as a beginner. The first zone in Noita has a large number of lanterns that frequently create uncontrollable fires. This makes it easy to become on fire when wooden walls surround most paths.

The benefit of having a flask filled with water is that it’s easy to douse yourself with water to get rid of the fire. The same strategy applies to plenty of other liquids that can be harmful. For example, the purple slime certain enemies bleed slows you down if it gets on you. Rinsing off with water or jumping into a pool of water removes it.

This is a simple and great tip to know for all Noita players. The green toxic sludge pools are dilutable with a tiny amount of water. The more you put in, the quicker it will convert to water. However, only a few pixels worth of water from a flask will completely convert it. This is useful for when you’re low on water or have tons of enemies leaking toxic sludge. 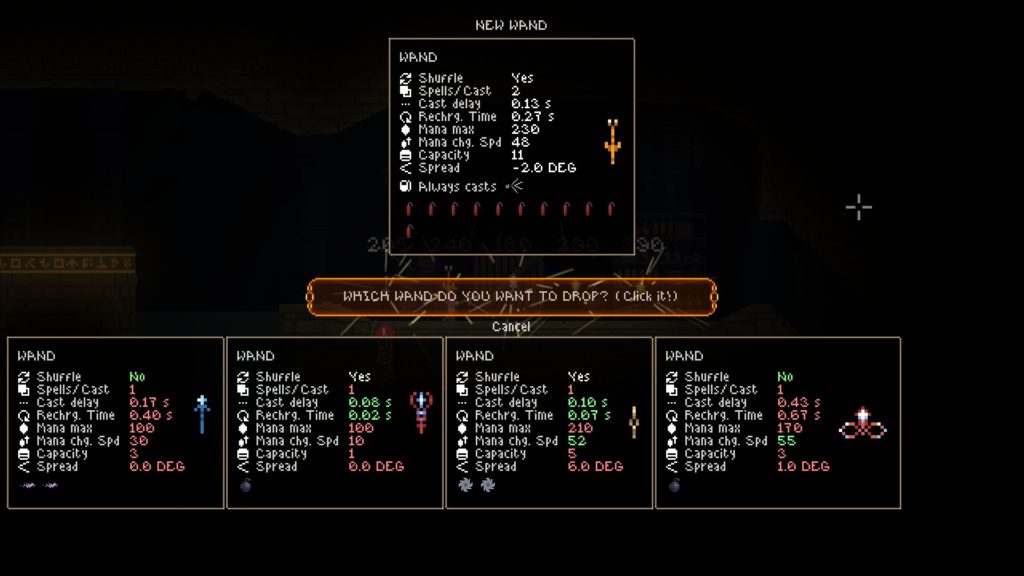 Knowledge is power in most games and especially in the case of roguelikes. Finding new wands in Noita is vital to finding strong spells and great wands for surviving. However, there are plenty of wands that will kill you the second you use them.

This, unfortunately, happens when a combo of spells work against you more than for you. And in other cases, sometimes it’s just a massive explosion you aren’t expecting. Understanding the strengths and weaknesses of your wands and spells is the key to winning.

If you run into the message, “You Have Angered the Gods,” take a peek at our guide on what it means.

I hope these tips and tricks teach you something new and help make your life in Noita easier. It’s definitely a difficult roguelite that can be tough to learn. But simultaneously, it’s a blast as you get better and discover all sorts of secrets. If you’re looking for more fun games in this genre, visit our Best Roguelikes & Roguelites List.