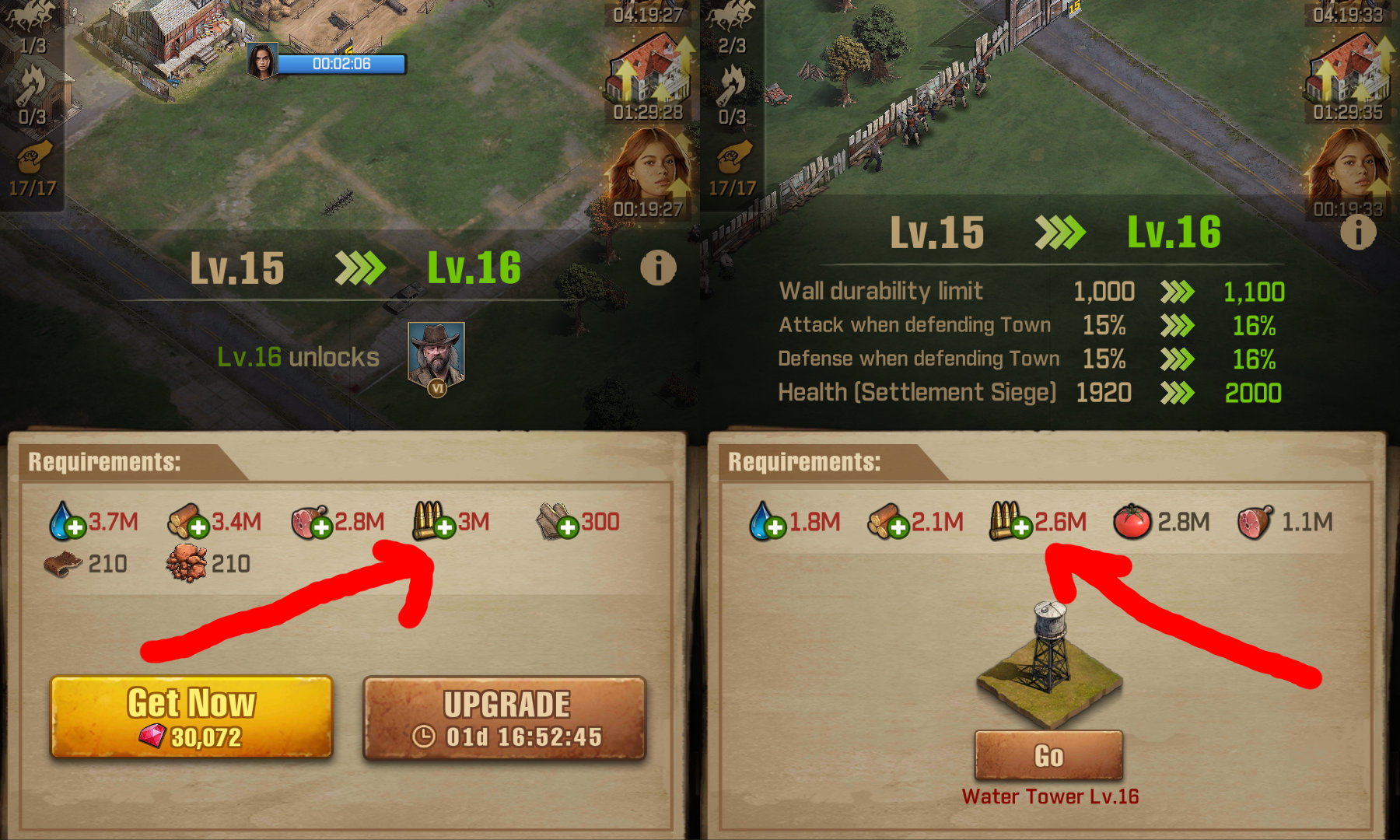 One of the tougher resources to get in The Walking Dead: Survivors mobile game is bullets. As your town continues growing, you’ll need to learn how to get bullets to keep upgrading. This is why we’ve put together this guide to teach you every method for getting this resource so it’s not a problem. Continue reading below for our in-depth guide on The Walking Dead: Survivors.

How to Get Bullets in The Walking Dead: Survivors

As there are many different methods for gathering the bullets resource, we’re going to start with the best ways and work our way down. We’ve also included one real money option at the bottom of the list below for those that don’t mind spending money. Otherwise, every other method is by simply playing The Walking Dead: Survivors for free.

One of my favorite methods for farming this resource is raiding other players. Once you’ve researched the Gold Rush technology under Basic Combat, you can start stealing bullets. This is a good way to farm them because you can also gather other resources that you may need. The only negative part of using this method is that you can only get a small amount for some reason.

There must be some sort of hidden raid protection for bullets since you only get 20 to 50k in most cases. Even if you have plenty of space for resources and the person you’re attacking has millions. So don’t be surprised if you only get a small amount for each attack. It’s a nice bonus on top of everything else more than anything. 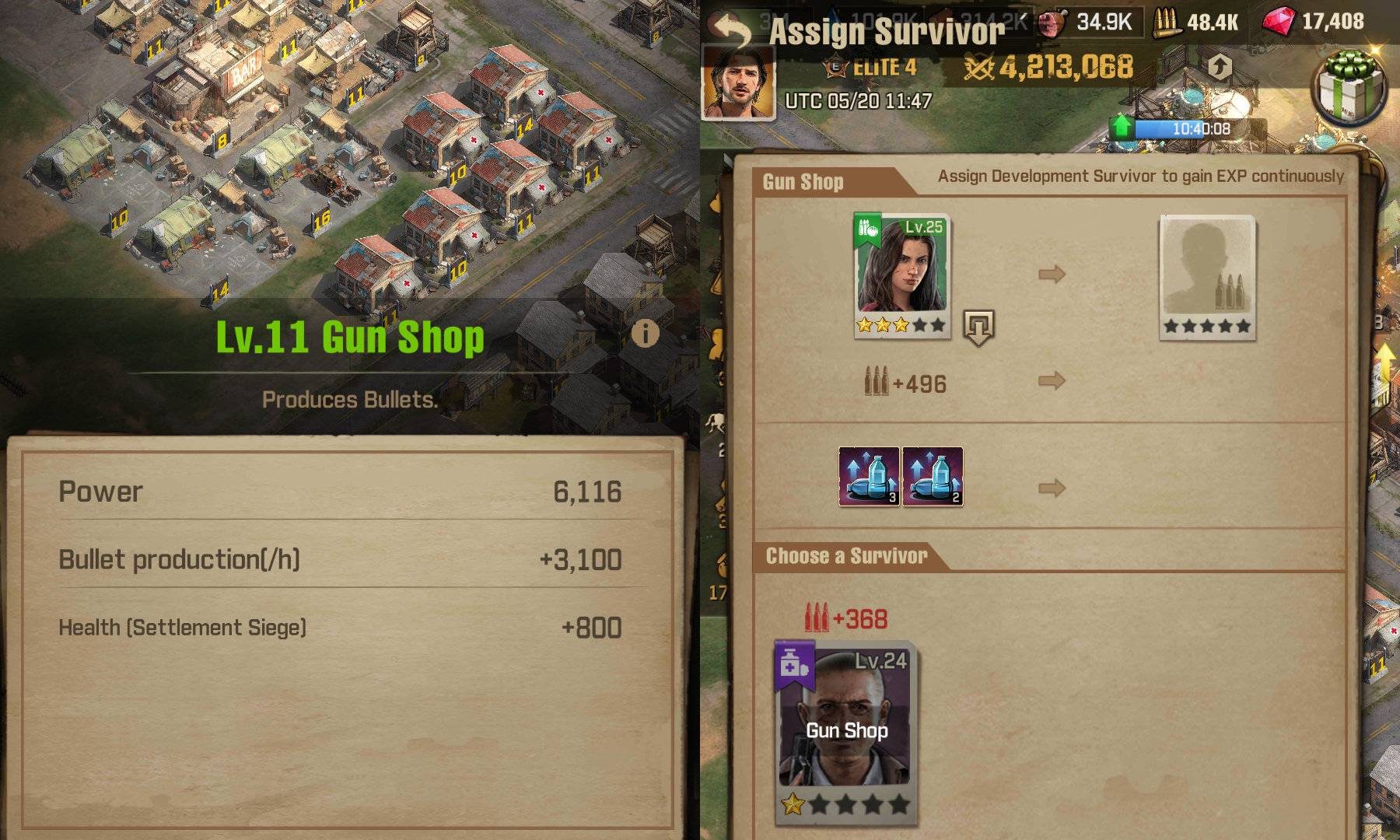 The second best method for getting bullets is to build and upgrade your Gun Shops. These will give you a consistent source of them without needing to actively play The Walking Dead: Survivors. Plus, you don’t need to spend any stamina or bread this way. Just make sure to take full advantage of each Gun Shop by assigning survivors to them if you have extra ones.

Assigning survivors to a Gun Shop is a useful way to pump out an extra few hundred per hour. Even if you use someone that isn’t a high level or specialized in this resource. This just functions as another useful option to gather resources instead of assigning them on the map.

Rally Attacks Against The Abandoned

The Eugene and The Abandoned event provides a decent rally opportunity for farming bullets. However, you can only spawn groups of The Abandoned by finding Eugene’s Coded Message items. Depending on the level of Walker you kill, you can get these items from them. If you decide to use this method, you’ll need 20 stamina/bread per attack. Which can be a little expensive.

Level 18 groups give around 50k bullets, Walker resources for buildings, and vehicle parts for the new Garage update. If you’re planning on farming vehicle parts already, the bullets are a nice bonus. Lastly, keep in mind that you’ll need help from your clan as rallies require two people.

Buying Bullets From the Lone Trader

This is one of the simpler methods by going to the Lone Trader in your town. You can exchange resources and Rubies (real money currency) for other resources. While there won’t always be great exchanges available or resources that you want, it doesn’t hurt to check every now and then. Sometimes you’ll see an item or deal heavily discounted worth buying.

You might even want to spend Rubies occasionally with how often the developer hands them out. Our guide on how to get power quickly mentions a few free ways to get Rubies as well. There are several tricks to getting them for free that you may not know about. 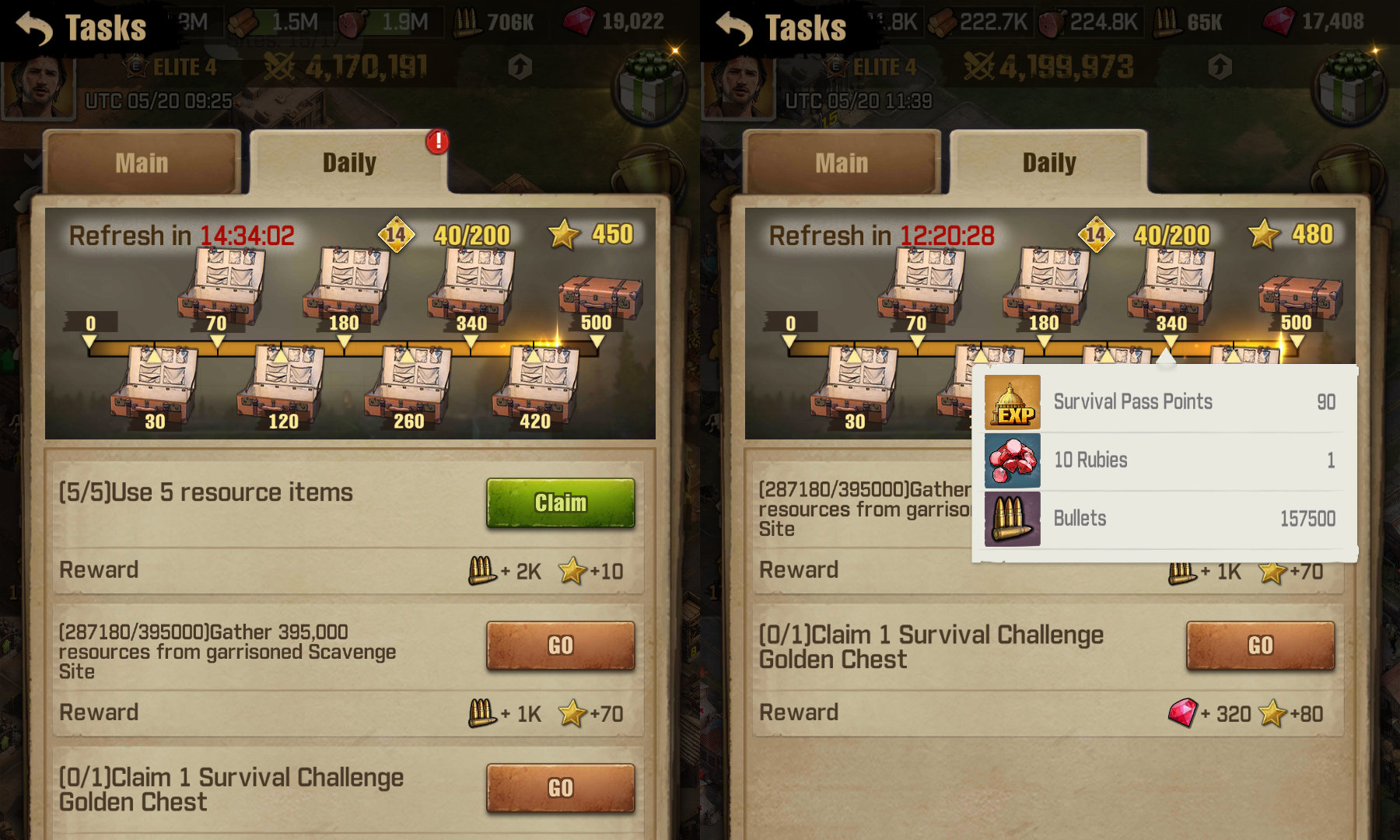 Dailies are a small part of The Walking Dead: Survivors always worth completing for some extra rewards. Especially the tasks that provide Rubies if you’re able to complete them too. Regardless, many of these dailies also provide a small number of bullets. Which makes them even more worthwhile to focus on.

Another advantage of being in a strong clan in The Walking Dead: Survivors is territorial income. If you’re in a powerful and active clan, they’re more likely to conquer territory. This ends up adding to your clan’s prosperity and over time providing more resources to every member. These resources also include bullets even if it’s only a small amount. It’s a nice addition to all the other methods in this guide, such as the Gun Shops too.

Military Convoys are one of the worst methods for gathering bullets simply because of how much stamina/bread you’ll go through. The only time I ever do Military Convoys is for the daily task. In most cases, you’ll end up with a convoy surrounded by a variety of Walker horde levels. This means you have to waste stamina taking out potentially low-level Walkers with mediocre rewards. And in exchange, you end up with a small number of bullets. 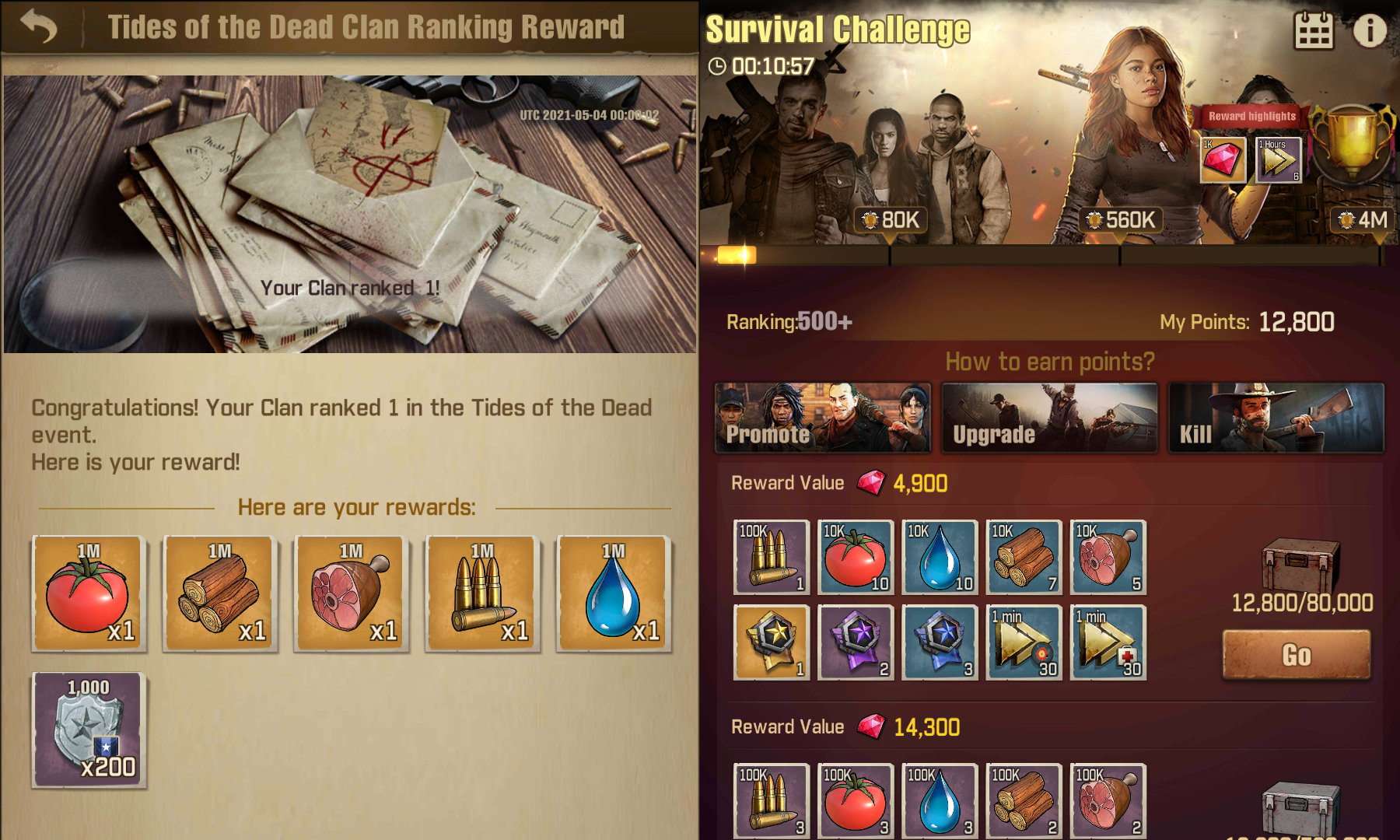 Similar to the event, Eugene and The Abandoned, there are other events worth looking for that give bullets too. The Survival Challenge can give a few hundred thousand via items if you’re able to get multiple chests. However, depending on what the challenge is, that might not be so easy. Sometimes the only way to get points for the Survival Challenge event is radio transmissions. And not everyone can get enough of those for it to be worth it.

Another way to get a small chunk of bullets is the first reward for the Woodbury Armies event. While it’s not much, all you need to do is participate in one rally to get the 10k reward. Just make sure to visit the event page and collect them manually. There are other events too like the Tides of the Dead where you can end up with 1 million of every resource even.

Buying Bullets From the Clan Store

If you’re loaded with Clan Points and don’t mind spending some to get bullets, this is also an option. A recent update to The Walking Dead: Survivors made it so clan members don’t need to rely on clan leaders to restock the shop. Instead, everyone can now buy what they want directly. Despite the developer removing certain items from the shop.

Regardless, you can buy 10k with 40k Clan Points, 20 times daily. If you max it out, you’ll get 200k bullets for 800k Clan Points. This method is near the bottom of our list because it’s expensive and you don’t get a lot.

I haven’t had any experience with Army Camps yet in The Walking Dead: Survivors. However, they have an ammo icon on the picture for them when using the binoculars to search. This makes me think they’re either a rally event or another resource point to gather from. If you have any idea how Army Camps work, feel free to comment below the article and we’ll update this section.

Buying the Gigantic Pack of Bullets for $4.99 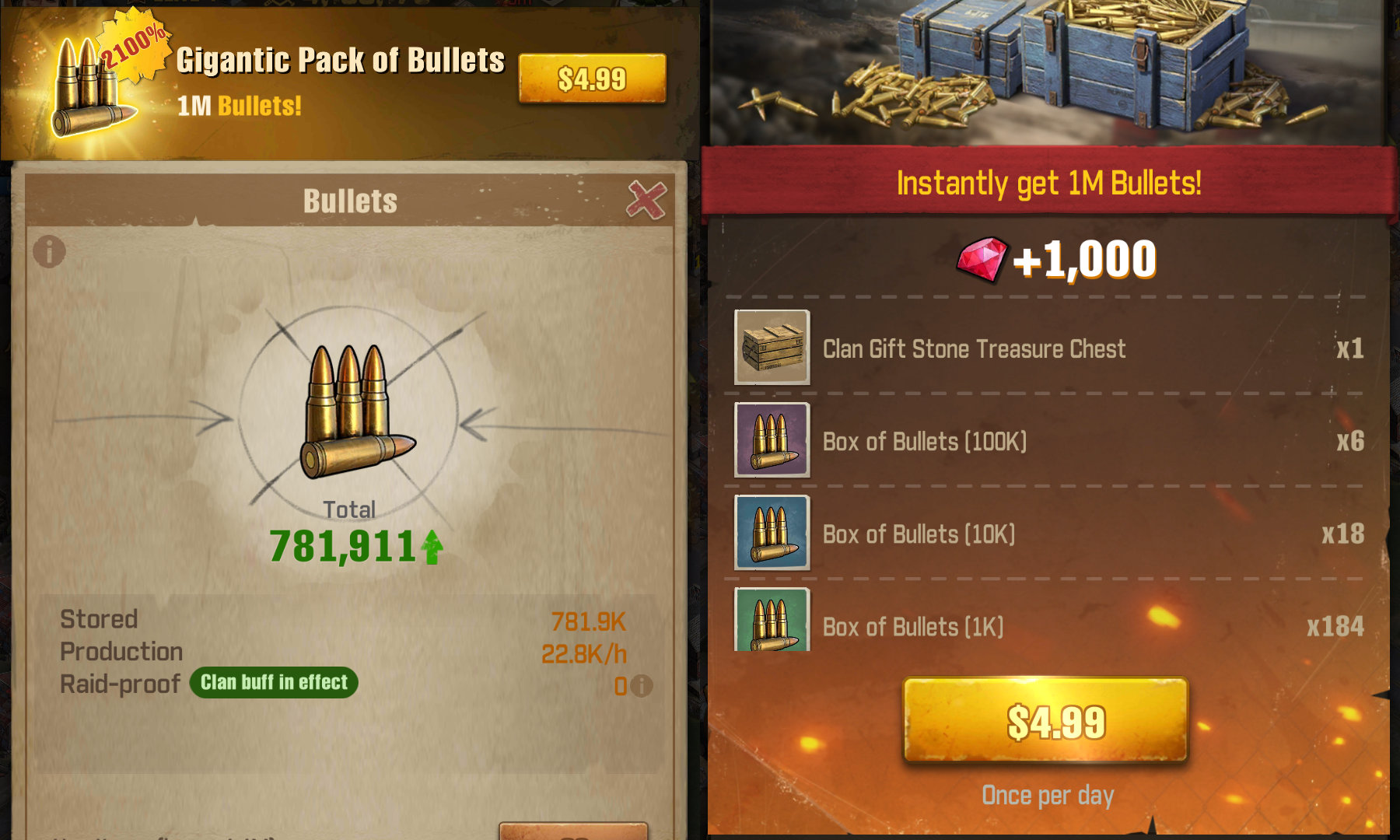 The final method for getting bullets requires spending real money as mentioned in the header above. You can purchase the Gigantic Pack of Bullets for $4.99 and get a total of 1,039,000. These are split up into several packs of items so you can use them whenever needed. While players can’t get that many bullets from attacking you anyway, this is a nice option to only use the items when you need them.

If you have any questions for us regarding The Walking Dead: Survivors, feel free to comment below the article and we’ll try to help out. Otherwise, here are a few guides that may teach you a little more about this mobile game.

how to get bullets by searching using search army camp? every time i try to find it pop up out not found is always

I haven't been active on TWD: Survivors in a bit, but the outer regions won't have army camps. You'll need to move closer toward the center to find them.

Another option I find is the best way is to save all rubies you get and spend them on the wheel, although it's only a small chance to land on bullets, still when you do you can get alot from it. Aswell as alot of other goodies

Agreed Shane, I've taken advantage of the Wheel a bunch too. If you're in an active clan getting clan chests frequently, you can get a buttload of rubies from them. That definitely helps with spinning the wheel more frequently too.