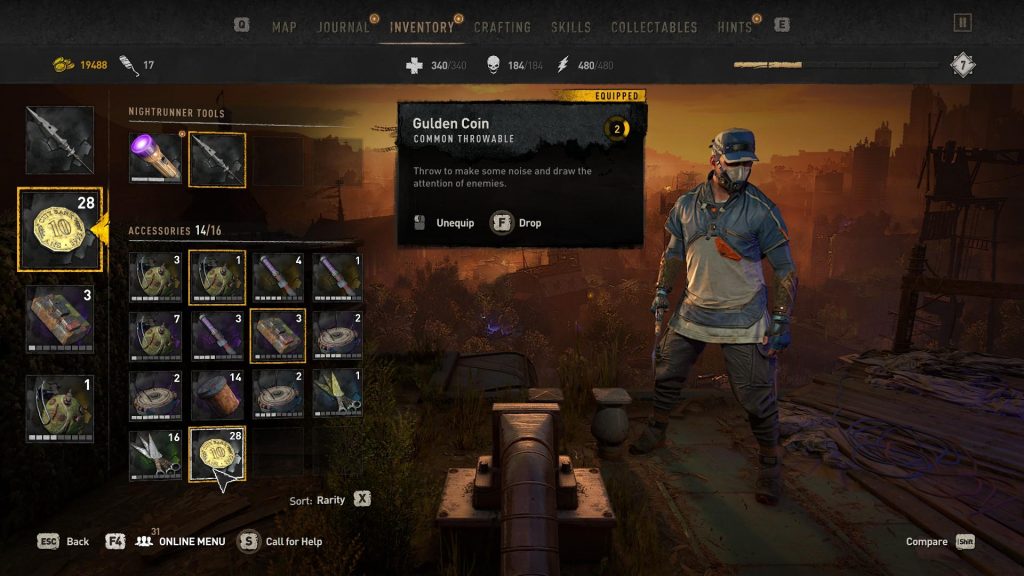 If you’re someone that enjoys playing games stealthily, learning how to throw coins in Dying Light 2 is useful to know. This is an especially useful accessory to have at your disposal when sneaking around sleeping zombies. While you won’t necessarily want to wake them up, this will help distract the ones already awake.

Scavenging Forsaken Stores and Dark Hollow buildings can be a dangerous affair especially if you try during the day. With that said, you’re still bound to run into large groups of zombies in other areas too. Such as clearing a metro station filled with zombies or even bandits you need to distract. Throwing off a bandit’s patrol path can help you get by quietly or set up a silent takedown.

How to Throw Coins in Dying Light 2

If you take advantage of your Survivor Sense, you’ve likely looted some Gulden Coins by now. You can get these from ticket machines and vending machines as well. They’re spread throughout all of Villedor both inside buildings and along the street. But, you can almost always get Gulden Coins by looting these machines inside metro stations.

For those of you playing on PC, the default keybind for using accessories is a little inconvenient. It’s on the middle mouse wheel button. So you’ll need to click in your scroll wheel as long as you have the right accessory equipped. If you’re not sure, you can see which accessory is active by looking at the bottom left corner.

This area has a small d-pad of items with the left one representing your accessory, in this case, the Gulden Coin. By default, you can cycle through them by scrolling your mouse wheel or holding the number 1 to reveal a radial menu. Just be careful because the radial menu doesn’t pause time. But, it does slow it down a little bit. Otherwise, it’s the left trigger for controllers to use equipment/accessories.

It’s important to mention you can only have four accessories equipped at a time. Therefore, you may need to enter your inventory and choose which ones you want to use. Fortunately, as long as you’re not in a multiplayer session, entering the menu will pause Dying Light 2.

Here’s a quick tip for throwing coins in Dying Light 2 before you run away. You can hold your bound button for using most throwable items like grenades and Gulden Coins to track where it’s going to hit. This is especially useful for throwing grenades since you’ll see the radius of the explosion as well. Which can change depending on its upgrade level.

That aside, one frustrating part of the PC version for Dying Light 2 right now is not being able to bind side mouse buttons. It’s possible this may change at a later time, but it’s not available at release. Therefore, you’re stuck binding your accessory button to your keyboard if you want to change it. You can find the option in the settings under, Controls -> Actions -> Use Accessory.

Can You Throw Weapons in Dying Light 2

Many people that played the original Dying Light will be disappointed to learn throwing weapons isn’t quite the same. A popular trick players took advantage of was throwing a weapon before its’ durability broke. This was a way to get a little more use out of that weapon before it was destroyed anyway.

While you can still repair weapons in Dying Light 2, you can no longer throw them. The only exception is throwing opportunity weapons that can be found in the environment. For example, a spear, an empty bottle, and/or brick. I haven’t come across any other items that fill this role.

A good way to find throwing spears is to look for a green glow stick since they’re almost always together. The spear will be sticking directly up out of a body on the floor. I’ve found that you can get several of them when fighting GRE Anomaly Revenants. However, you can’t use another weapon while holding an opportunity weapon. So you’ll need to throw it first.

That’s all there is to this Dying Light 2 guide on how to throw coins and weapons too. Be sure to visit more useful guides here at Slyther Games listed below.