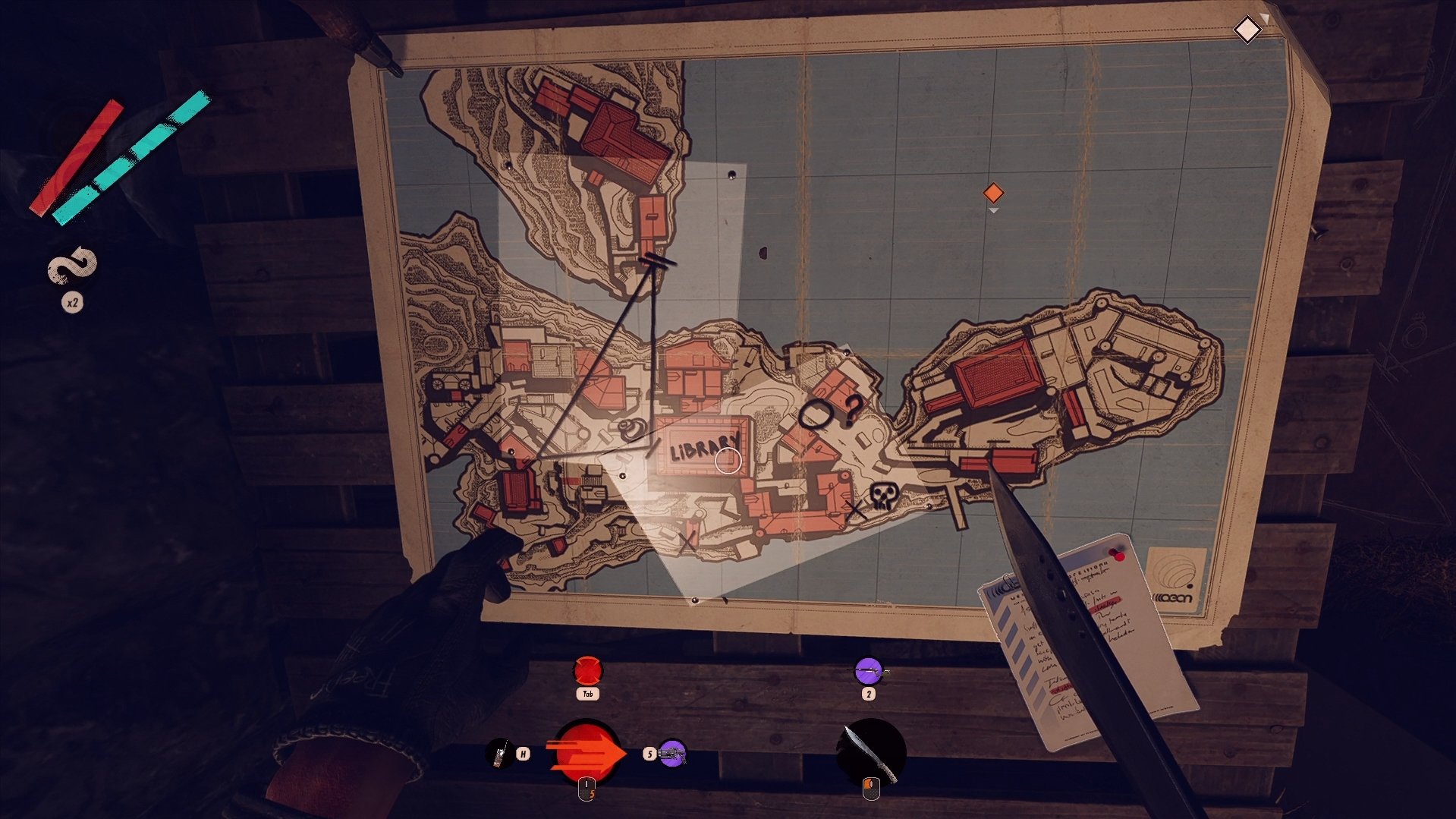 Deathloop is an action-FPS filled with secrets that you’ll continue to find across every loop. If you’re someone that likes to explore, you may have come across a secret safe inside a cave in Updaam. This is one of the four districts you can explore in Blackreef while playing Deathloop. While many of the puzzles you’ll encounter are story-related, this one isn’t.

Which means you’ll need to figure it out completely on your own without much help from the game itself. Fortunately, we’re here to help fill in the gaps and provide some tips on how to unlock the Updaam cave safe. It’s easy to get lost without even knowing where to start.

How to Unlock the Updaam Cave Safe in Deathloop

For those of you that have no idea what I’m talking about, there’s a secret safe in Updaam. You can find it inside a hidden cave in front of Aleksis’s mansion, underground. I recommend taking a look at the video above showing where the cave is and every clue as well. Otherwise, you can see every clue in the screenshots below.

Here you’ll find a safe that requires three codes to unlock with a few clues nearby. The main one is a map of Updaam with some symbols/glyphs drawn on it. And a few triangles off the map to the right. Each point of the triangle on the map and each symbol represents a location where a number is. 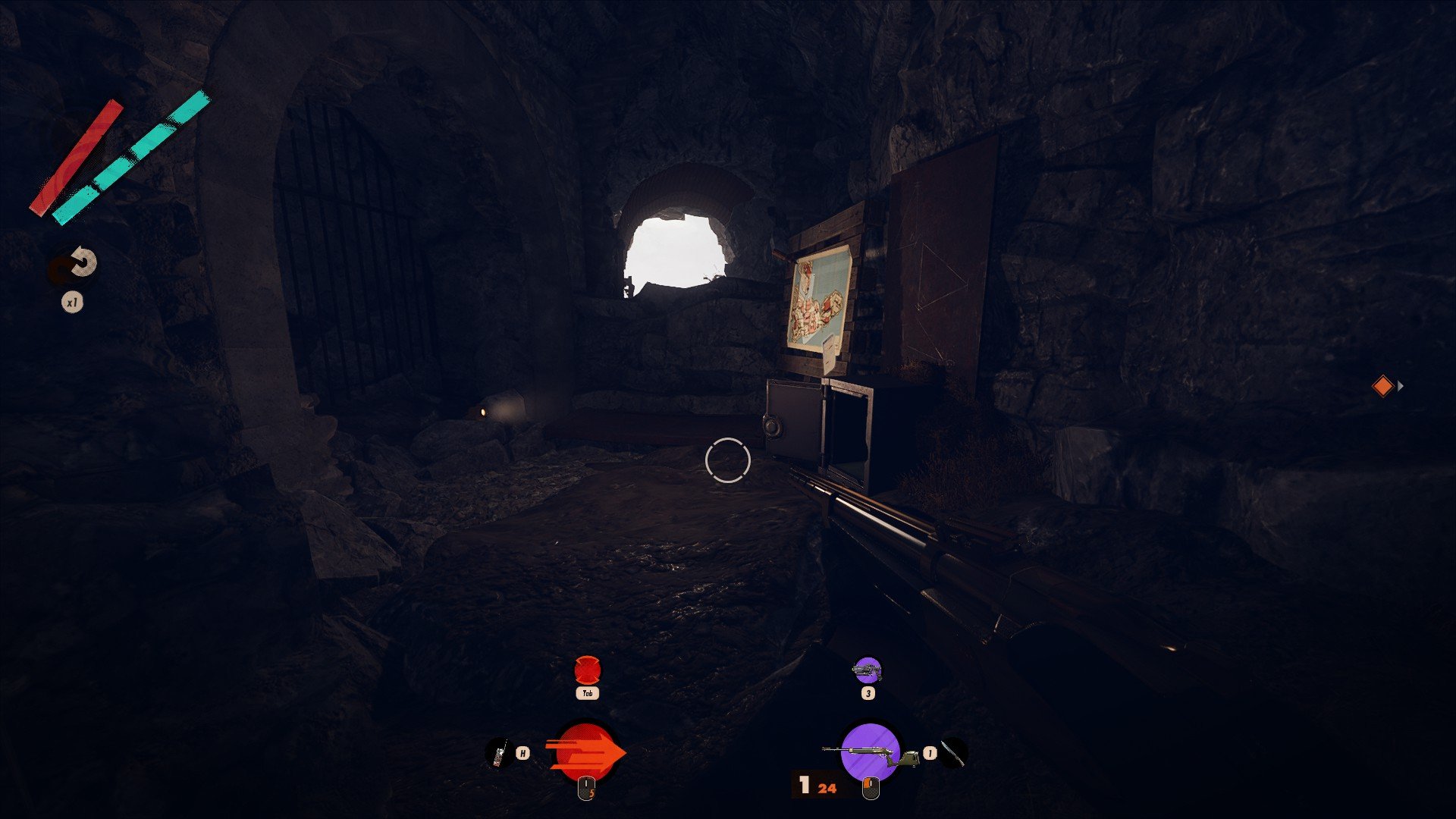 Unfortunately, the numbers are different for everyone playing Deathloop so you can’t copy it from a guide. You’ll still need to do the legwork yourself. Before you start tracking down each number, you should take a screenshot of the map and write down the number at each location. If you don’t, the puzzle will be a pain off memory alone.

One more quick note, you can explore Updaam during the morning or afternoon phase to avoid invasions from Julianna. However, you’ll need a sniper rifle to see one of the numbers if you choose these times. Since the bridge to Charlie Montague’s game house will be closed. 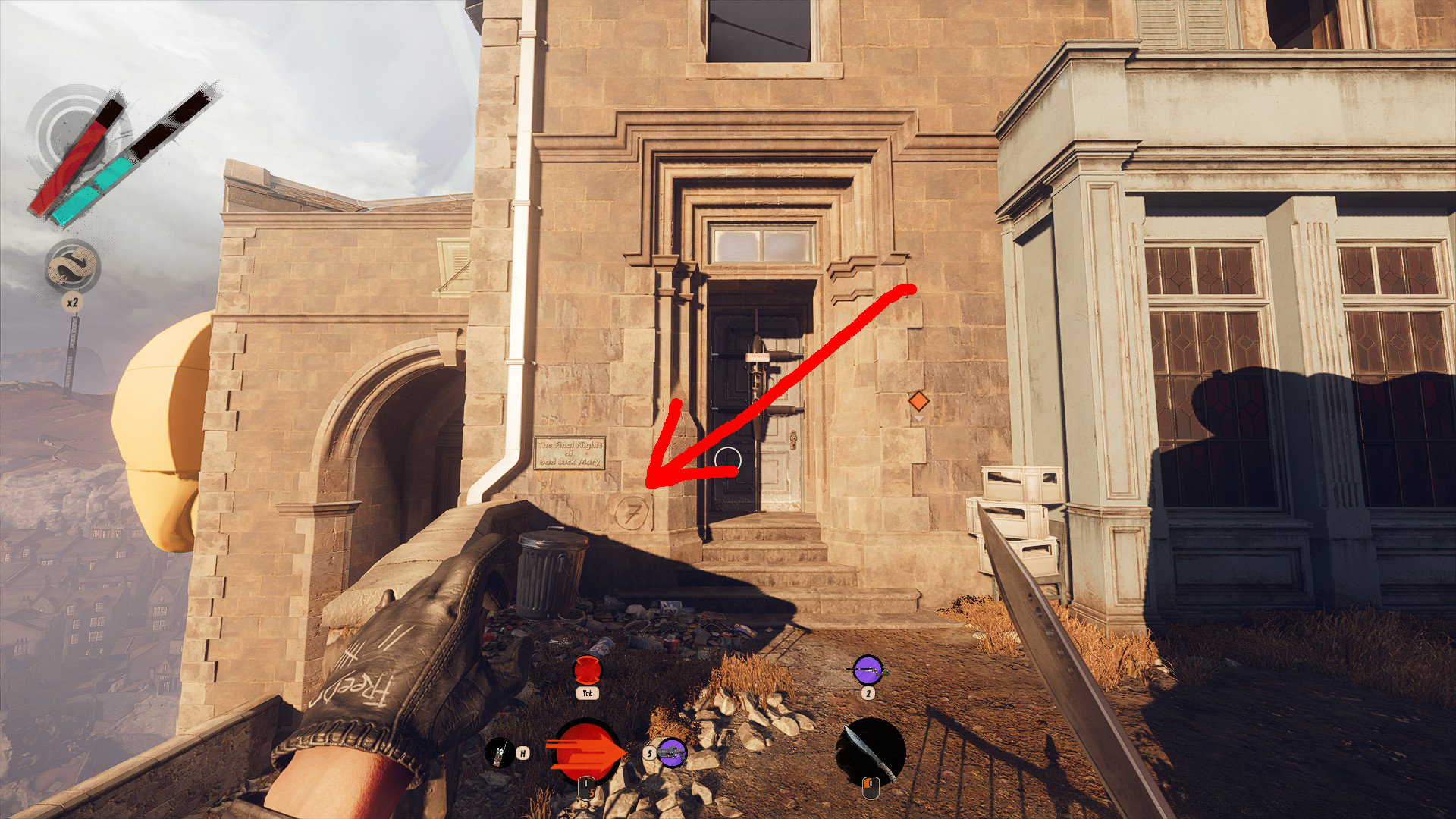 The skull glyph marked on the map represents a number near Colt’s apartment. You can find it below the window, to the left of a locked door. There’s also a plaque above it that I believe is referenced in the cave note. In my run, the number was seven.

Outside The Moxie Challenge (Southern X)

The southern X on the cave map represents a number outside The Moxie challenge game made by Charlie Montague. This isn’t too far from the starting tunnels, but you can see the general area in the screenshot above. If you follow the cliff on the right side of Updaam, you’ll come across this archway.

The archway also has art above it that says, “Time is your plaything”. And you can find the number near the cliff to the right of the pillar, on the right side of the arch. My number was five, but to reiterate, it may be different for you. 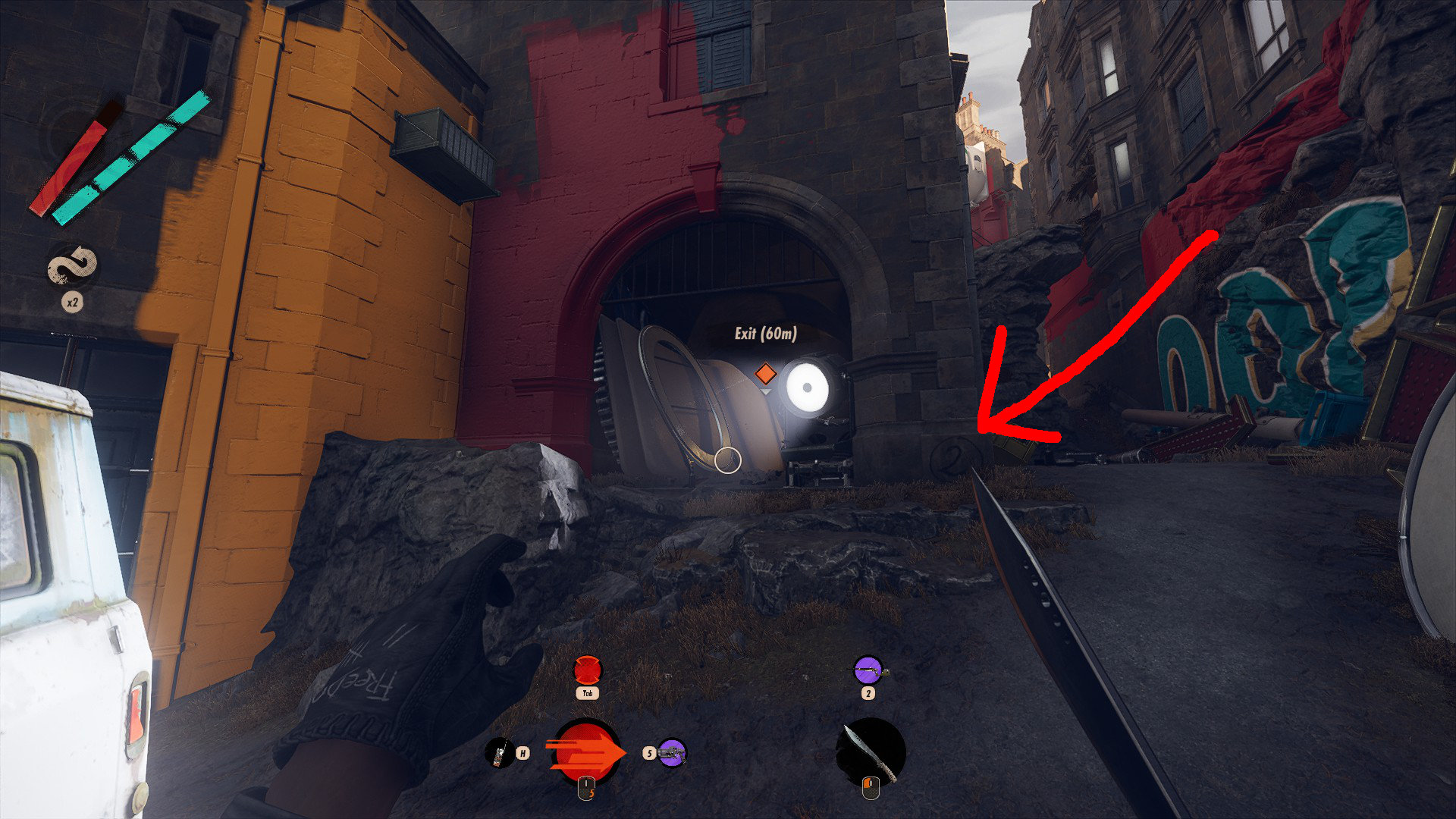 The western point of the triangle already on the map has a number shown in the screenshot above. This is in an alley near the tunnel entrance where there’s a spotlight at least in the morning phase. Also, it’s near a tall locked gate and not too far from the library.

You can find this number to the right of the spotlight on the bottom of the archway. In my Deathloop run, the number was two. 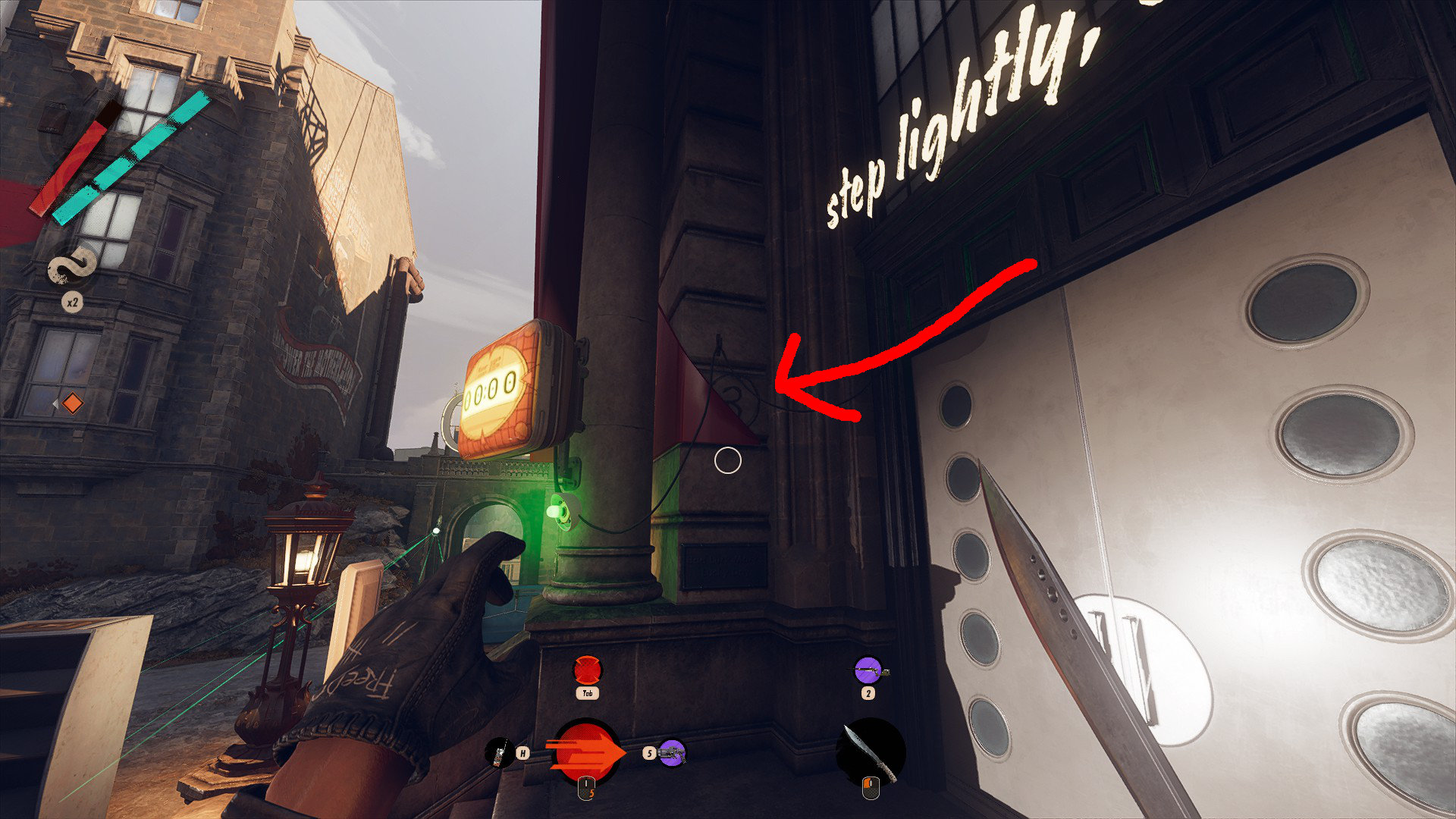 This cave safe number is represented by a ring glyph on the map. You can find it near the library entrance where two white doors are during the morning phase. Otherwise, it will be blocked by a concert stage setup during the afternoon. Be careful during both times because there are a lot of people around.

If you try to find this number during the morning, you’ll have a tougher time. With that said, this number is slightly hidden behind a red banner as shown in the screenshot above. My number was three in this loop 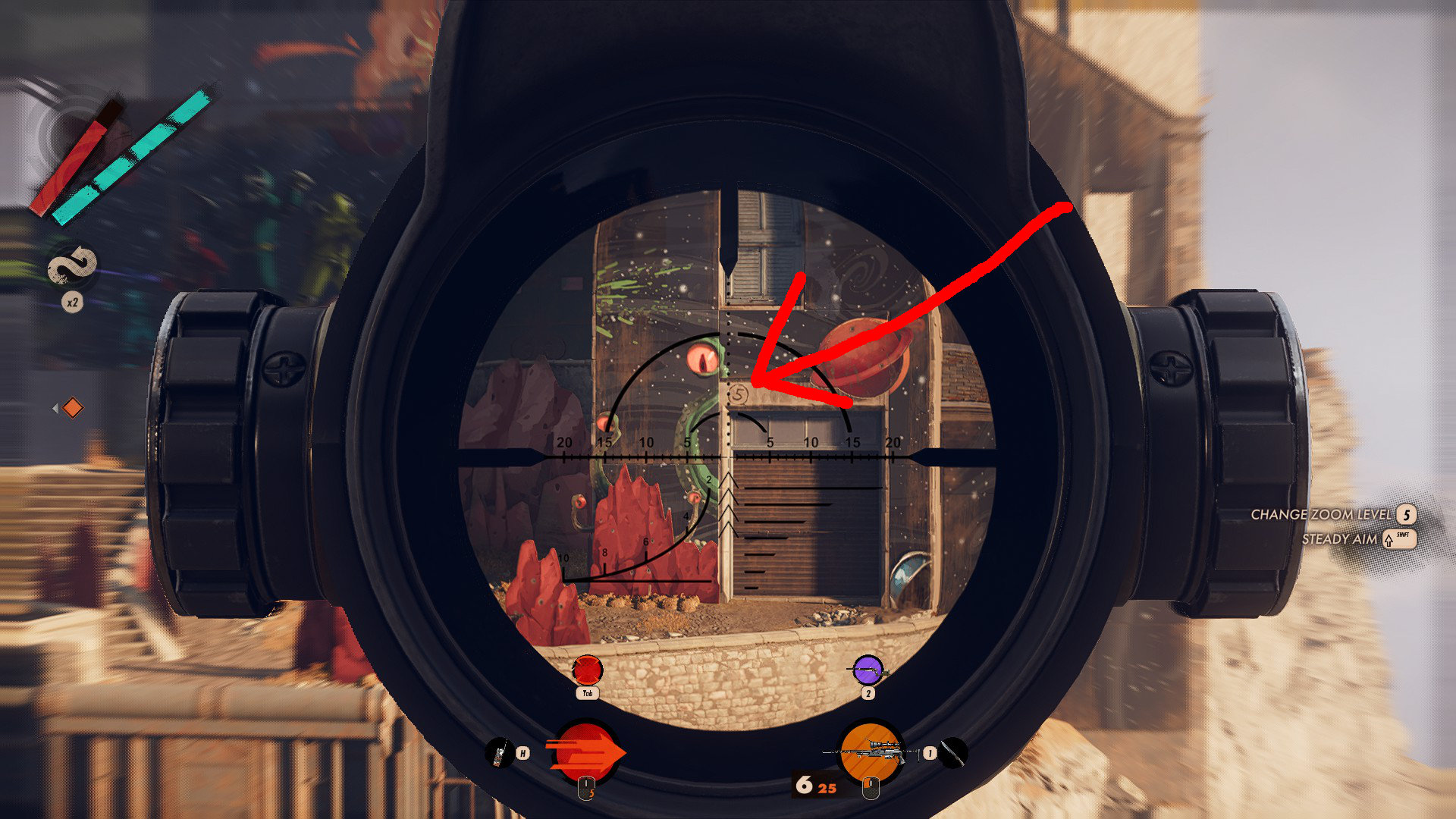 This number is marked on the cave safe map by two dashes/lines. As mentioned previously, you’ll need a sniper scope if you visit Updaam when Charlie Montague isn’t around. This is because the bridge to his game house island will be closed otherwise. However, you can still take a look at the garage across the way as shown in the screenshot.

The number is above the garage door, below a green eye tentacle creature. In my Deathloop run, the number was five. 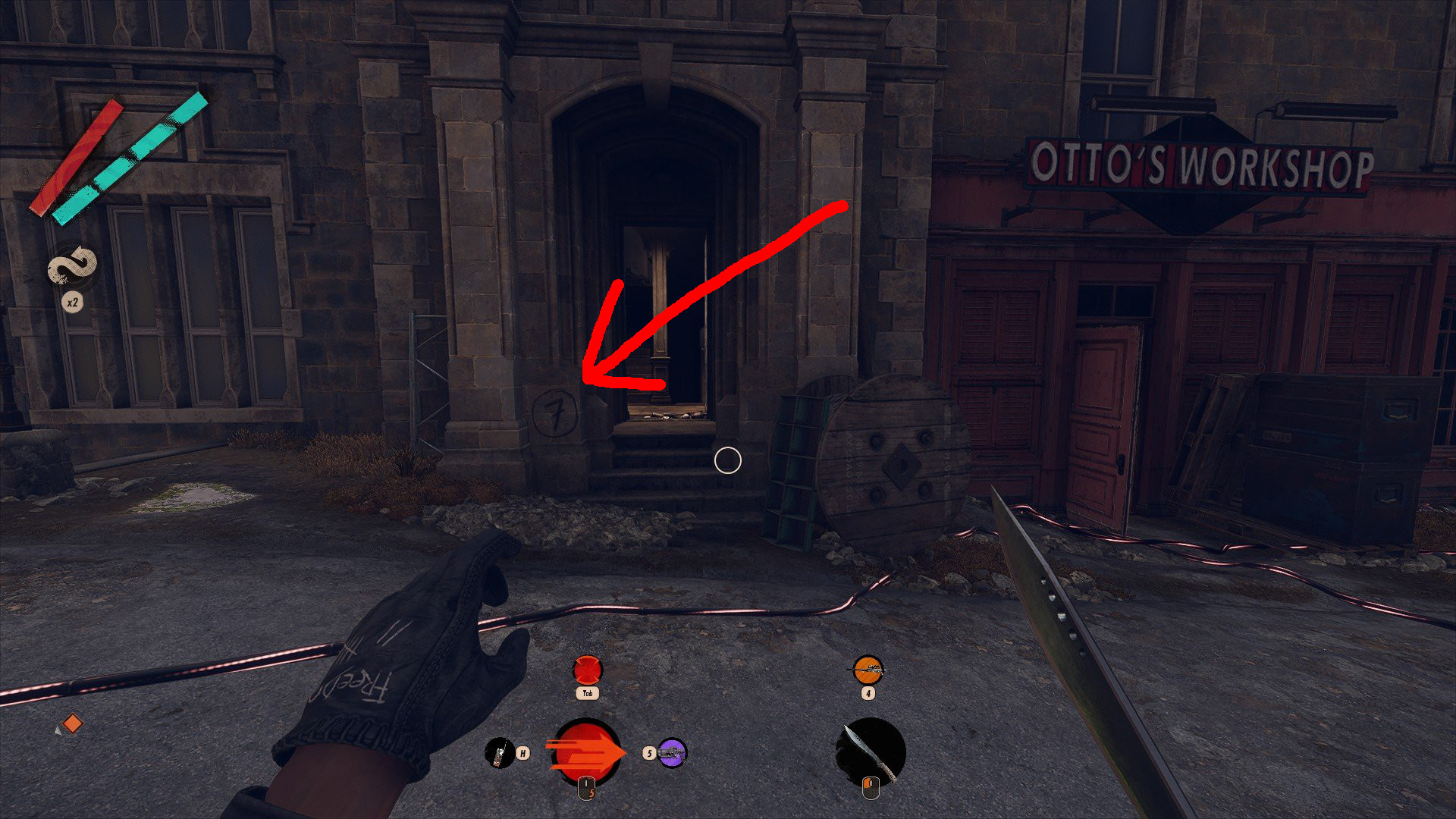 The final number to find for the Updaam secret cave safe is the circle glyph. It may just be a circle, but we’ll refer to it as a glyph anyway. Regardless, this is near Otto’s Workshop which can be seen in the above morning phase. Otherwise, it’s completely destroyed and burnt down in the afternoon phase. 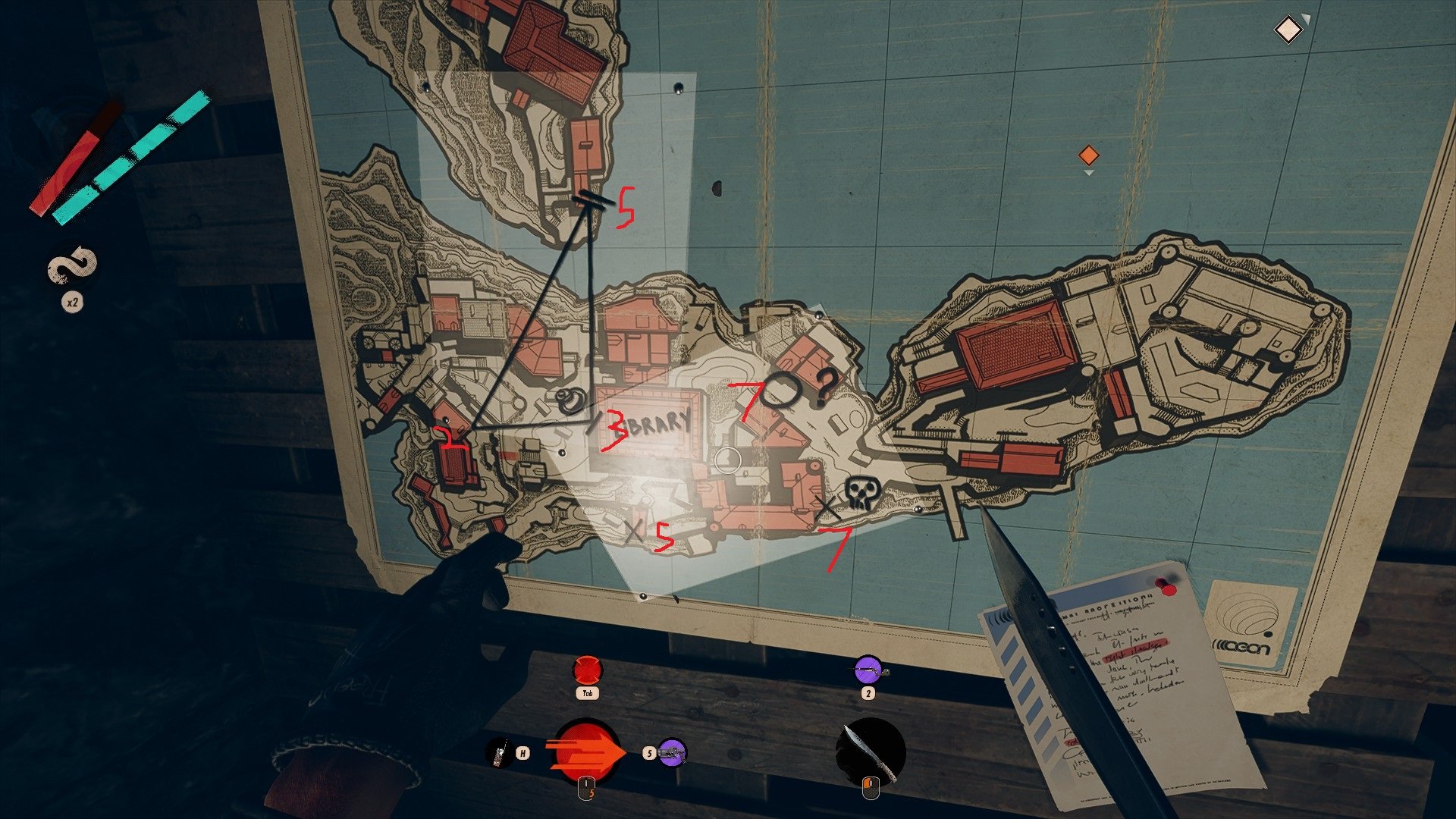 Now that you have every number you can compare it to the map in the cave to help make things easier. In my experience, I wrote the numbers on the map in a paint file since I played Deathloop on PC. This is important to do for the next step and because your numbers are likely different from mine.

The next step leads to the triangles to the right of the cave map. There will be three adjacent to each other in a column. Starting from the top, each one represents a code for the safe since there are three codes to figure out. So the top triangle is the first code, the middle one is the second, and the bottom is the third. 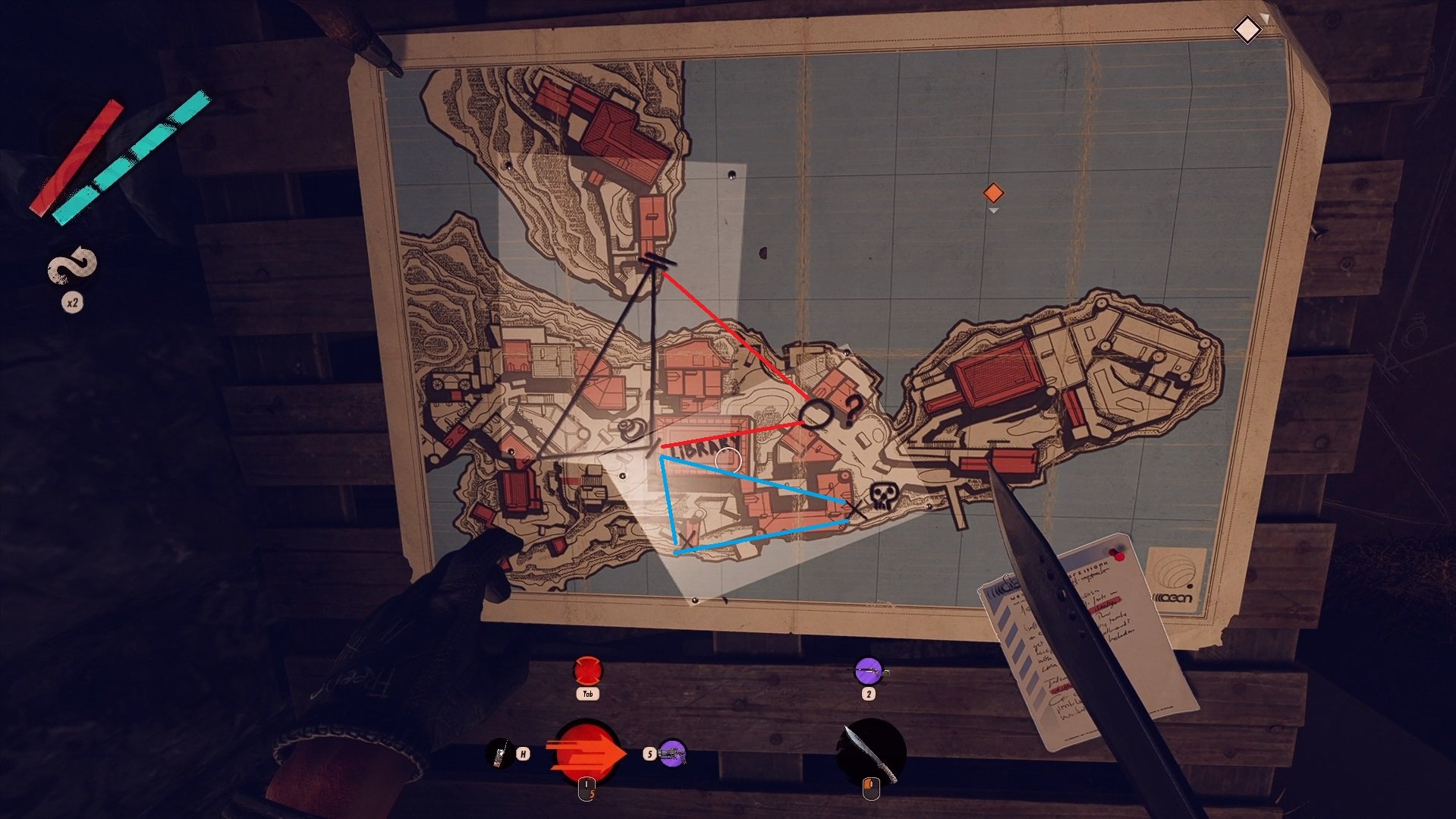 These triangles can be drawn over the map connecting to certain glyphs showing which numbers are needed for that code. In the screenshot above, the black triangle represents the first code, the red is the second, and the blue is the third. This tells us that each triangle uses the following numbers for its code:

While it’s possible other clues here may lead you to the correct order, I just brute-forced it. Fortunately, it’s not too difficult to do since there are only six combinations for each code. Here’s how to brute force the code for the first one:

Eventually, the code will click and you’ll get a green light on the safe. This means you can start working on the next set of numbers and triangle. Once you’ve entered all three codes, the Updaam safe will open revealing 5,000 Residuum inside for infusing gear. And since each loop in Deathloop repeats, you can use the same code over and over.

That’s all there is to unlocking the hidden Updaam cave safe using each of the glyphs. If you have any other questions or don’t quite understand a part of it, feel free to ask in the comments. It’s definitely one of the tougher puzzles in Deathloop.

Hi all. I was stuck for several minute on my puzzle, as no guides are accurate. Next to the map in the cave there are drawings of triangles. Try to make them match a map. For me the 3rd triangle was skull, ring and top of of triangle already marked on the map.

Edit none of my triangles contained X

My triangles were definitely not that, could be either they're randomized or we both got lucky on a random combo of overlapping numbers. Anyone reading this article try different triangle combinations, my 2nd and 3rd triangles were totally different, 2nd was the ring, the question mark and the bottom X below the ring. My 3rd was the skull, ring and the top X above the ring.

Hey Arrow, thank you for the heads up. Early on, I noticed that another player had the same setup so I wasn't sure if it was a coincidence. That definitely adds to the confusion for everyone haha.

Don't just tell us where to go for fucks sake, tell us HOW TO DO THE PUZZLE OURSELVES.

I mean, the article pretty much does both. There's not a whole lot to it other than, find the numbers and then make a code from the triangles. The toughest part is figuring out where the numbers are and that's why the guide shows each location. Otherwise, you can just look at the map and try to figure out where each number is. That's what the guide says before showing any of them.

Unless you're referring to the video. That's purely there for showing the number locations and nothing more.