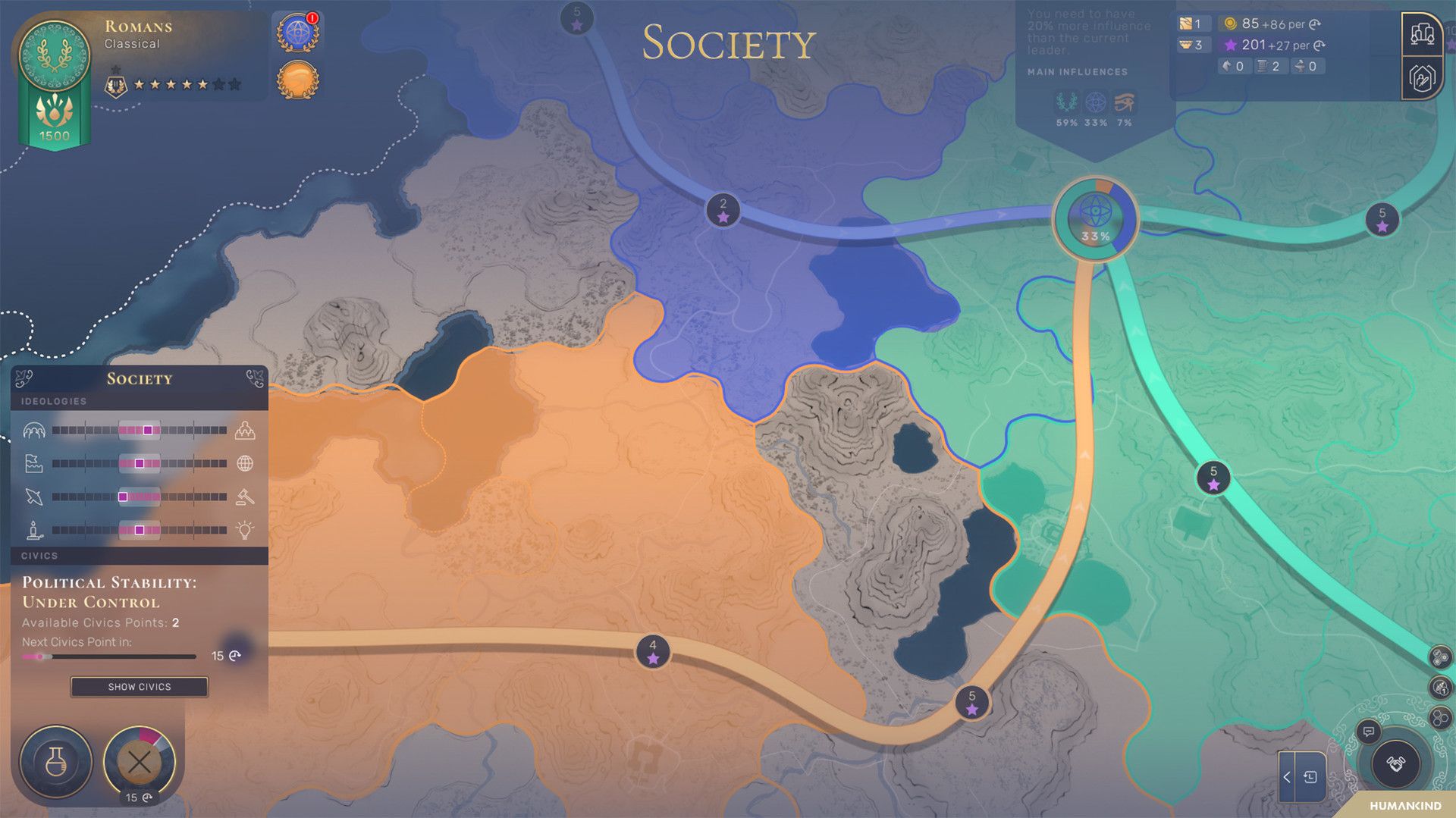 Culture conversion is a mechanic in Humankind where you can spread enough Influence to bring empires into your Sphere of Influence. This can be a confusing system to understand if you’re new to it. Especially if you find yourself losing population to other empires or random grievances appearing. Continue reading our guide for how culture conversion works, how to take cities, and how to build war support using it.

How Does Culture Conversion Work in Humankind

One of the many ways to produce grievances so you can build war support is using Influence. This is the purple star currency that you’ll mostly use for building outposts, attaching them, and absorbing cities too. However, there’s a relatively significant mechanic behind this currency that revolves around simply producing it.

Culture conversion is the process of converting other empires to your culture. This can help create positive relations with a neighbor or negative ones when you steal their population. You can see how your Sphere of Influence is spreading by clicking the Civic button near the bottom left corner. This is the scroll with a purple ring around it for those that don’t know. 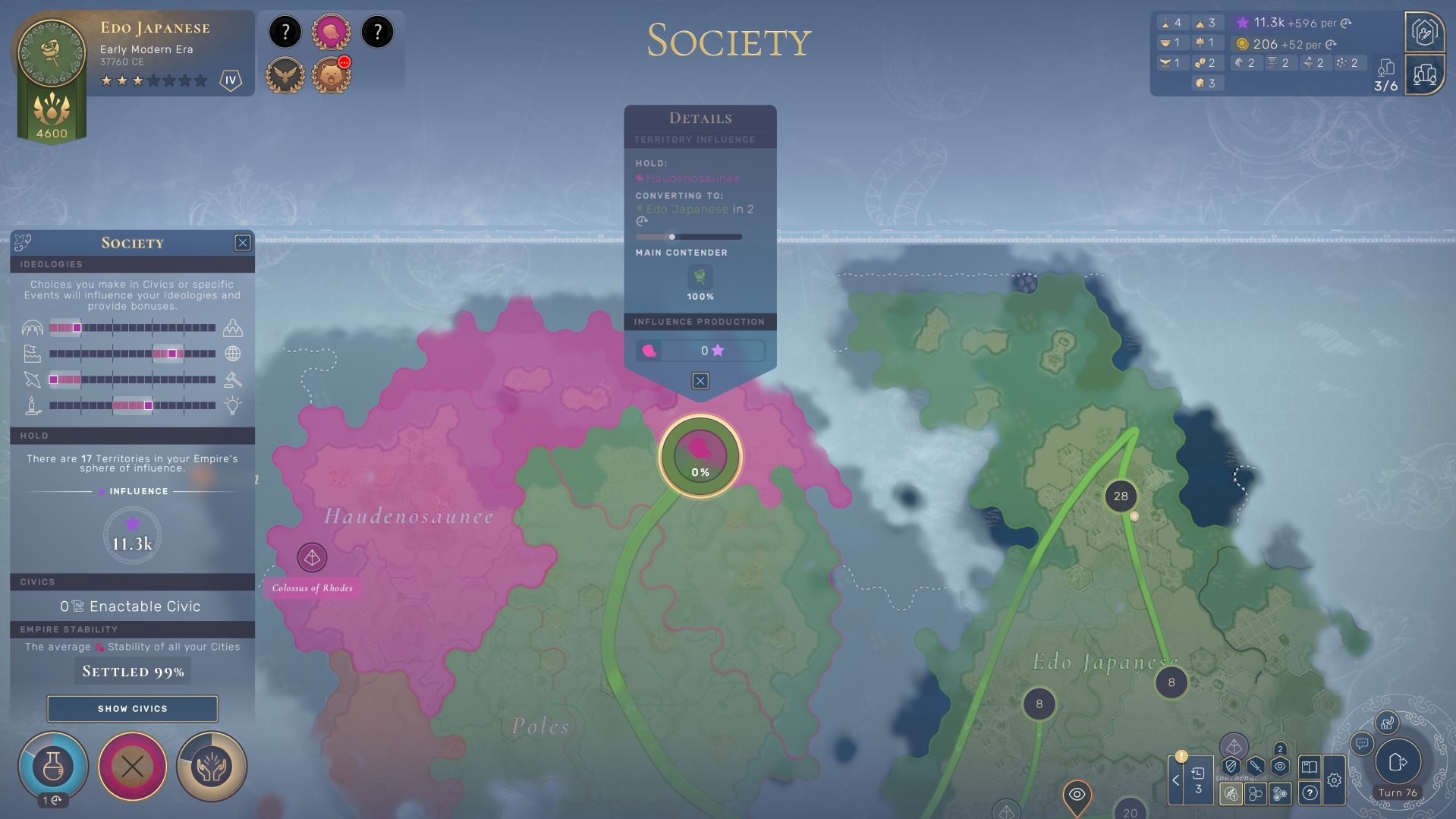 While on the Civic screen you can click different nodes to see how Influence is spreading there.

The best way to spread your culture is to produce a lot of Influence in cities near where you want to spread it. While I can’t confirm it, I have a feeling Influence works the same as Faith in that it loses efficiency with distance. With that said, there are still Humankind tricks you can take advantage of to reach empires far away.

As long as you’re producing more Influence than other cities, you can use trade routes to spread farther. For example, buying a resource in a far territory to immediately spread culture to that region. But, you can only do this if you’re not currently in a crisis with that empire. Such as at war or either side has demands with the other. 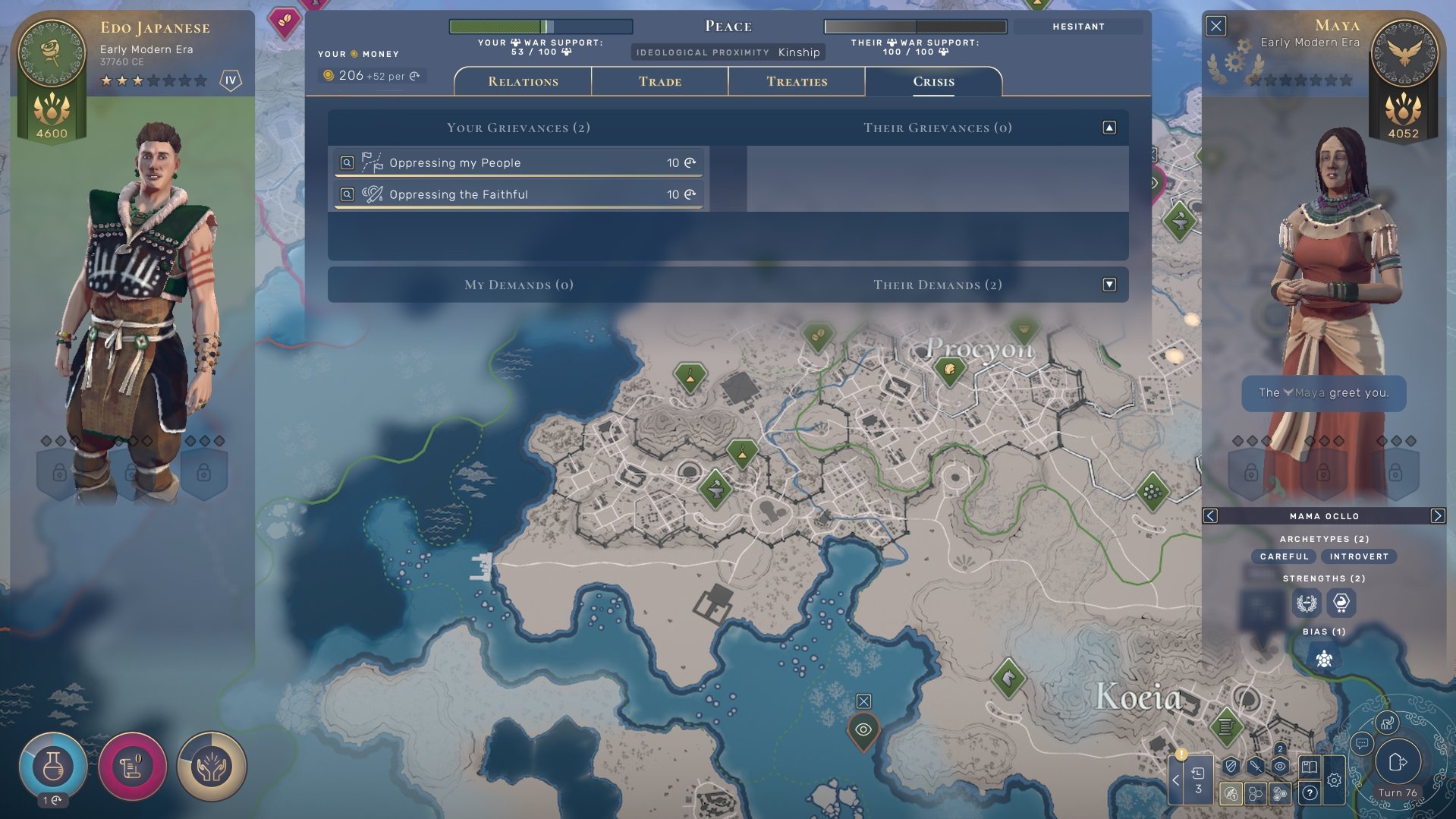 Start racking up grievances against empires by spreading more Influence than they are. This is easier as an Aesthete culture or by building Common Quarters.

Culture conversion is also a fun way to build war support with rapid grievances. The “Oppressing my People” grievance from Influence sticks around even if you withdraw it. For example, you can demand this grievance, and then an empire may force you to withdraw it or declare war. By withdrawing it, you’ll gain war support and it returns on the next turn since the city is still oppressed.

Due to how culture conversion spreads from city to city, you’ll likely rack up several grievances quickly. Even if you don’t withdraw demands, you can use several to gain war support over time by having more. For more info on war support in Humankind, visit our in-depth guide on How to Get War Support.

How to Take a City With Culture Conversion 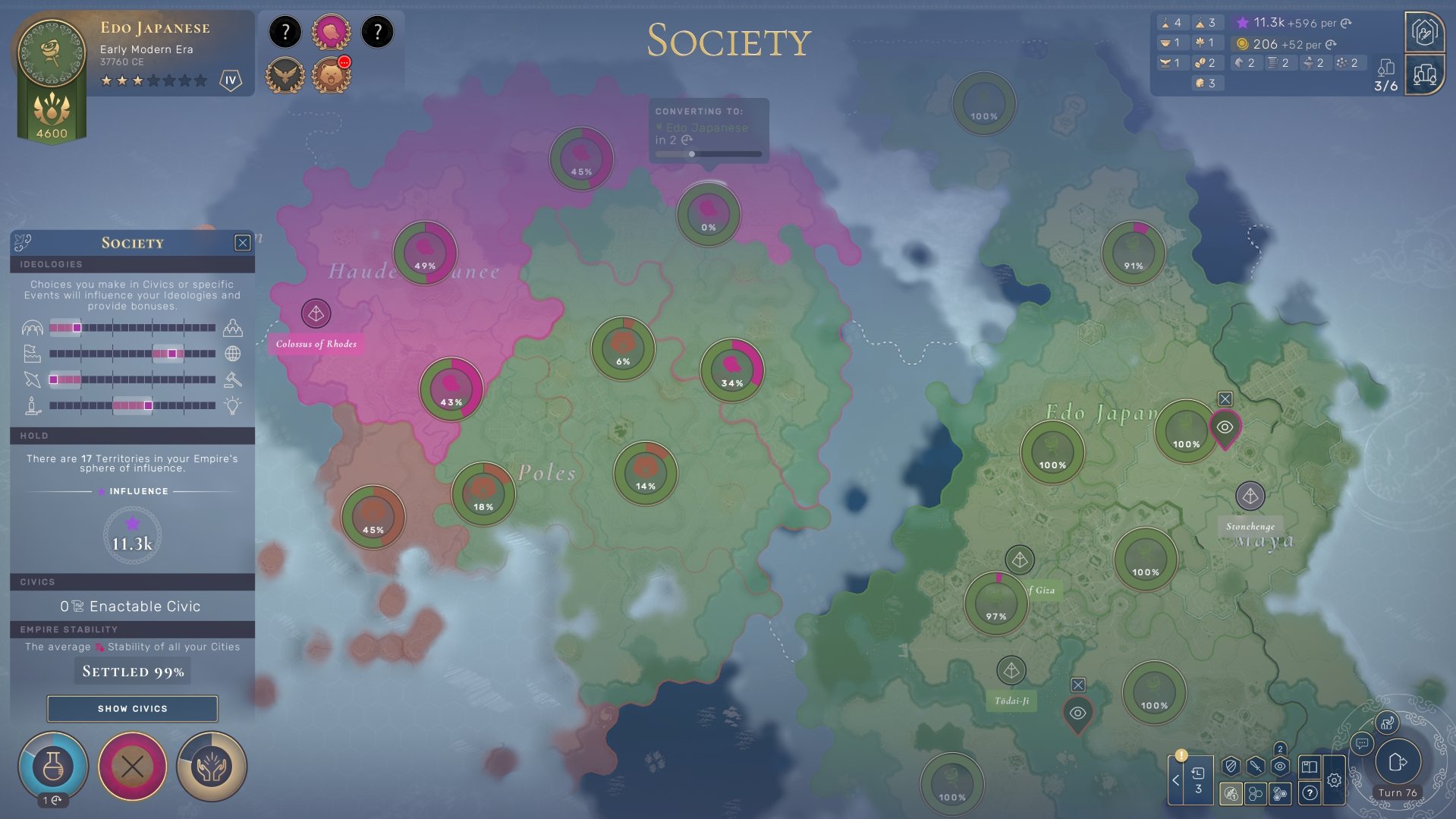 The Civic influence map lets you easily see the Sphere of Influence for every Humankind empire.

Converting a city to your Sphere of Influence in Humankind won’t bring them into your empire on its own. However, you can take advantage of grievances that appear from this method such as, “Oppressing my People”. A similar grievance that you can trigger for spreading religion is, “Oppressing the Faithful”.

Once your culture or Faith takes over another empire’s city, you can use this grievance to make a demand. However, it’s important to know AI won’t agree to a demand unless your military is much stronger. In my experience, you’ll want a strong enough military that theirs is considered weak or even a pushover. 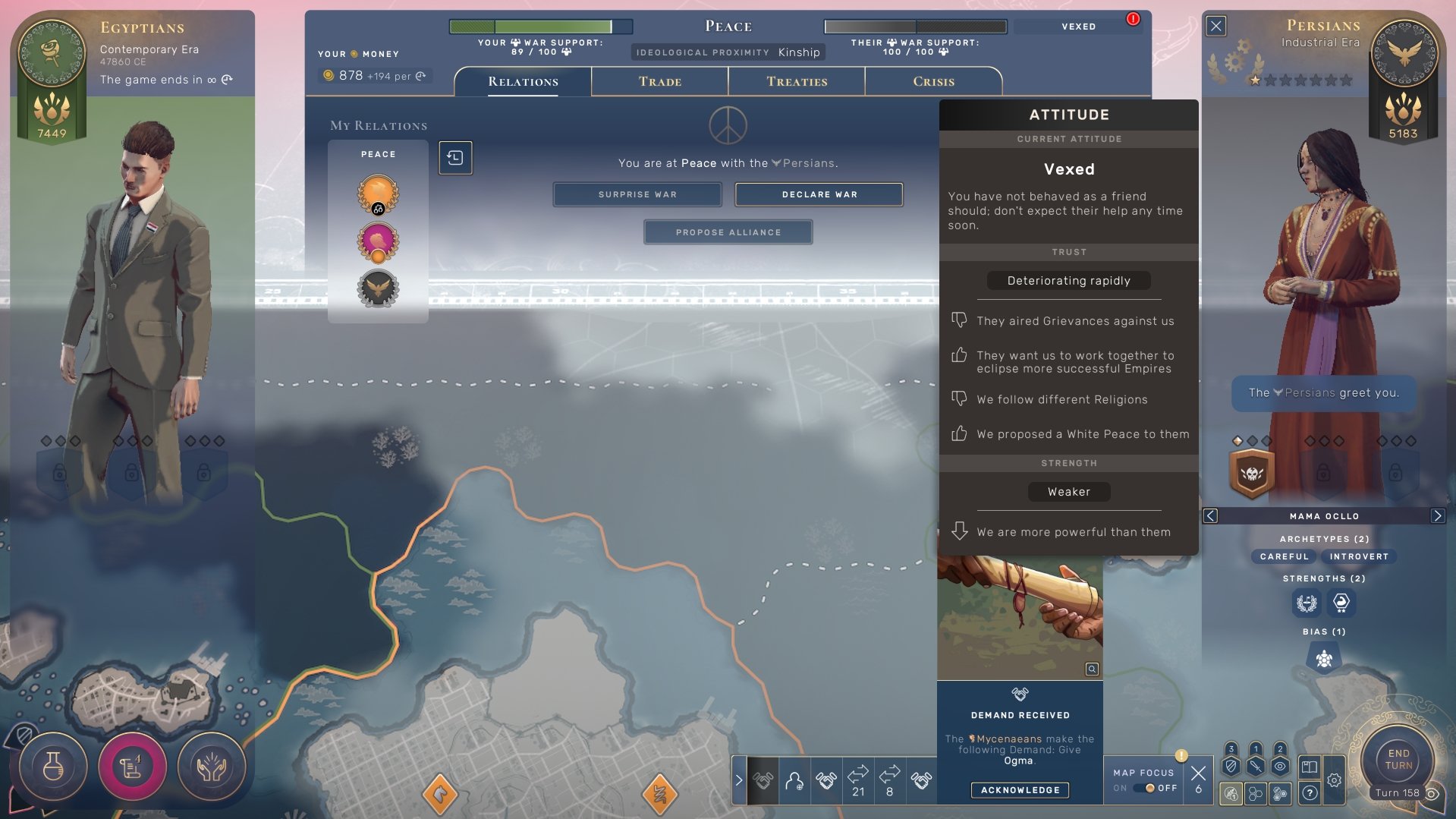 The diplomacy screen is a good opportunity to see both how an empire feels about you, and their military strength.

You can check the strength of another empire’s military by visiting the diplomacy screen. Then, hover your mouse cursor over their attitude at the top right corner. Attitude examples include Hesitant, Aggressive, Vexed, Friendly, e.g. A window will then appear where it states their military strength near the bottom.

If you have a strong enough military surpassing theirs, they’re more likely to agree to the demands mentioned above. For this type of demand, they’ll give you the city or outpost you’re saying is oppressed. This can be a fun strategy for taking advantage of Influence and/or Faith in Humankind.

That’s all there is to this guide on how culture conversion works in Humankind. If you have any other questions, feel free to comment below the guide for more help. Be sure to visit more guides below that answer common questions in the community.