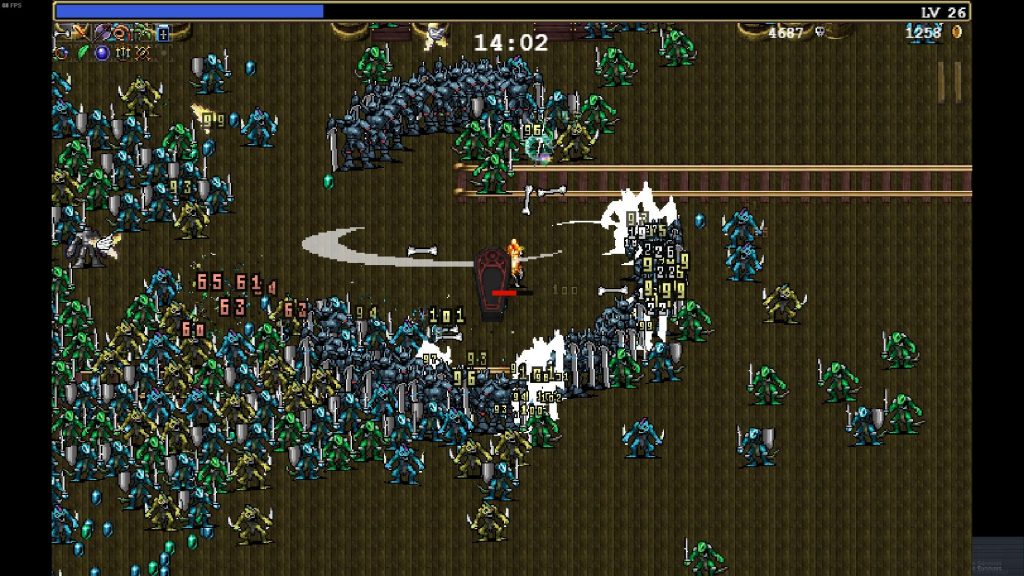 As Vampire Survivors continues to get updates, several patches have players wondering how to open a coffin. This originally only had to do with the Dairy Plant stage but the developer has added several more. Make sure you unlock the stage you’re trying to get the coffin for first. You’ll need to meet a certain condition which should be relatively simple if you understand how evolutions work in Vampire Survivors.

Before you can find the Dairy Plant coffin, you’ll need to reach level 40 in the Inlaid Library. As the blog update mentions and confirmed by me, you can quit upon reaching level 40 and the stage will unlock. If you haven’t reached the Inlaid Library yet, it’s a little easier only required level 20 in the Mad Forest. Regardless, continue reading the rest of our guide to learn how it all works.

How to Open Coffin in Vampire Survivors 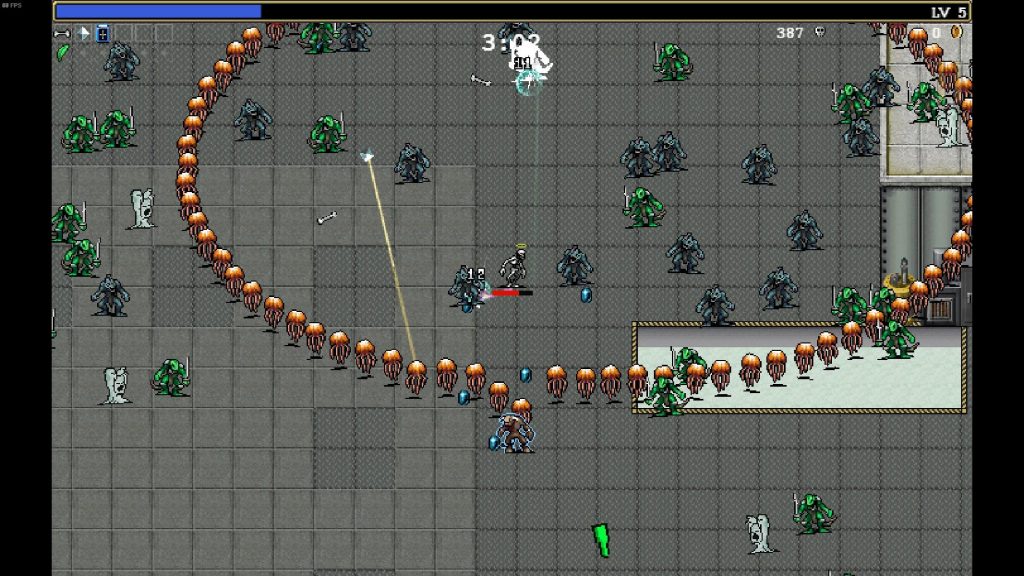 Make sure you follow the green arrow before searching for the coffin in Vampire Survivors because it won’t be easy to randomly bump into.

Whether you’re playing the Dairy Plant stage for the first time or not, you may have noticed a large green arrow at the edge of your screen. This points to a new mechanic/item mentioned in the blog update. Unlike other items and weapons you can find, this is a permanent item across all runs that you don’t need to spend coins on.

If you haven’t gotten this item yet, it’s the Milky Way Map which you can reach in around four minutes running straight to it. Unless you pick a slow character like Exdash Exiviiq. As far as I can tell, you don’t need the Milky Way Map to open the coffin, but it helps. You’ll want the map for the Mad Forest coffin as well.

How to Open Dairy Plant Coffin in Vampire Survivors 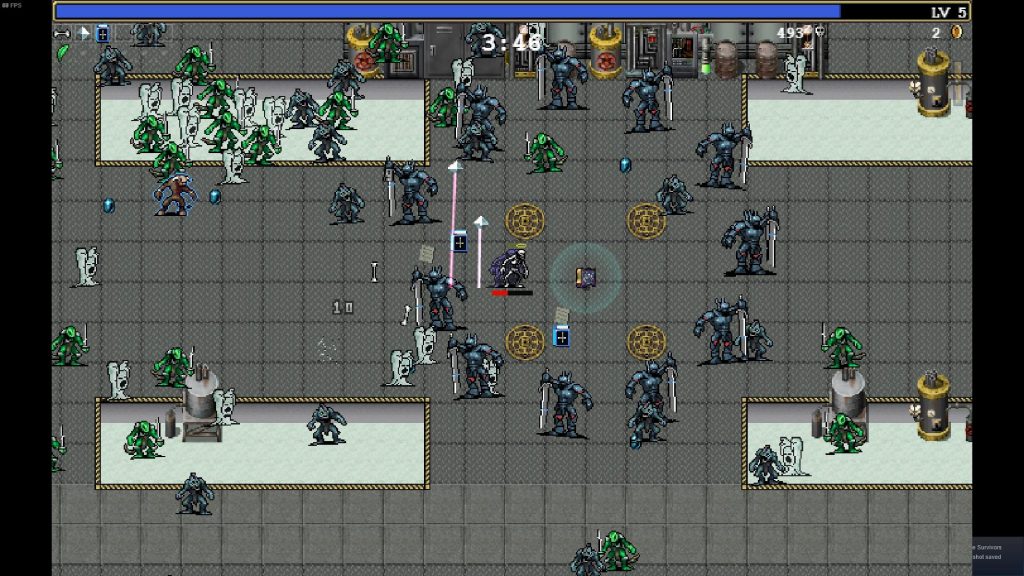 The Milky Way Map is great for tracking random items and collectibles across different stages like the Stone Mask and Skull O’Maniac.

The reason it’s worth getting the map is so you can find the coffin more easily when you have a normal run going. It appears on the map in the pause menu as a question mark. My recommendation is to work your way toward it and try to get an evolution because you’ll need to fight some tough enemies.

If you’re not well-prepared, you may end your run prematurely and waste time trying. Fortunately, there isn’t anything too complicated to opening the coffin. Once you get near it, a large ring of enemies will spawn moving outward from it and then back to it. Make sure you kill every enemy that spawns because the coffin won’t open until you do. 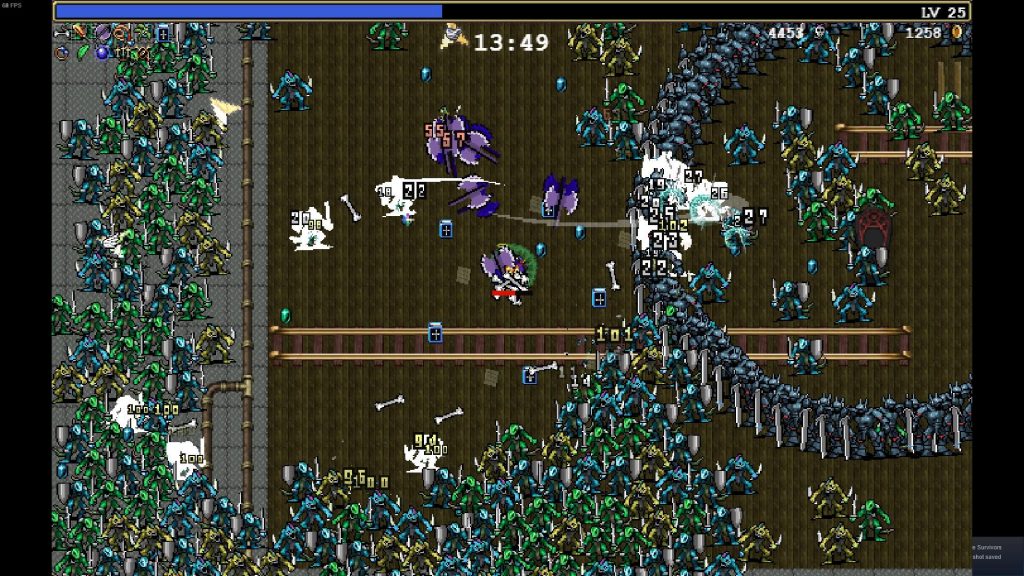 As long as you don’t immediately rush here, you should be able to wipe out these enemies with some items and levels. You can see in this screenshot I started the coffin around the 13-minute mark.

Each enemy will be of the same type so that should make it easier to track them down. The first time I opened the coffin, a few of them got lost in the mix with other enemies nearby. So if you get close to the coffin and it’s not opening for some reason, this is why.

After you’ve taken out every enemy that spawned, just walk into the coffin to sort of trigger a cutscene. This cutscene reveals the new character, Poppea Pecorina, and a message that says, “Thank you Mortaccio, but the vampire is in another coffin!” The character name depends on who you’re playing as. Afterward, you’ll still need to spend 2,500 coins on the character select screen to unlock them for play. 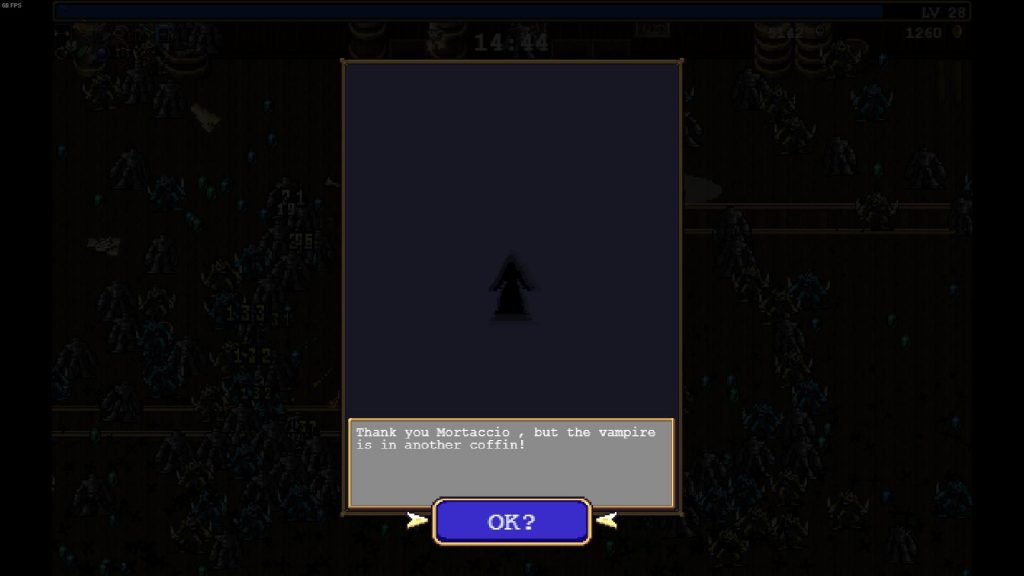 This short cutscene references Super Mario Bros. as a silly little homage to, “Thank You Mario! But our princess is in another castle!”

How to Open Mad Forest Coffin in Vampire Survivors Make sure you take advantage of the Milky Way Map or else you’ll have a tough time finding the coffin.

While the Dairy Plant coffin was added first, the Mad Forest received one in Patch 0.3.2. Even though the patch notes didn’t mention a new character, this is how to unlock Pugnala Provola. This process isn’t very different from unlocking Poppea Pecorina as explained in the previous section.

Just start up the Mad Forest stage and use your Milky Way Map to find where the coffin is. You’ll need to kill the tough enemies that spawn around it before you can open it. Once you’ve dealt with them and opened the coffin, you’ll have a new character available. You’ll still need to purchase Pugnala in the menu using gold. The cost varies depending on how many characters you’ve purchased. Unlocking Pugnala in Vampire Survivors reveals the message, “Thank you Mask of the Red Death, but the vampire is another coffin!” The character name is based on who you’re playing as.

I recommend tackling this stage in Hyper mode if you want to get there even quicker. Also, the Pentagram works well since it can immediately kill every enemy guarding the coffin. But, there’s no guarantee you’ll get it due to the RNG.

How to Open Inlaid Library Coffin in Vampire Survivors Depending on how many power-ups you have, you may need to get some levels and items before taking on the coffin skeletons. They have a lot of health even for the Mask of the Red Death.

As part of the patch 0.5.0 which implemented Arcanas, the developer also added another coffin for players to find. If you already have the Milky Way Map, you can simply pause to find the question mark for where it is. Since the Inlaid Library is a very horizontal map, you can make your way to the right until you find it as well.

If you’ve found the Stone Mask on this stage before, it’s a little bit farther past that. Fortunately, the coffin is difficult to miss since it’s in the center of the stage and immediately spawns a bunch of tough skeletons similar to the Mad Forest. If you’re still not quite sure how to open the coffin, you’ll need to defeat each skeleton before you can. Unlocking Giovanna Grana in Vampire Survivors reveals the following message, “Thank you Mask of the Red Death, but the vampire is in another coffin!” The character name is based on who you’re playing as.

Once every skeleton that spawned from the coffin is defeated, you can move on top of it to interact with it. You’ll get the same message as the Mad Forest coffin when unlocking a new character. However, this character is Giovanna Grana instead. The cost for buying Giovanna varies depending on how many characters you’ve bought.

How to Open Gallo Tower Coffin in Vampire Survivors You’ll need to look for a small secret if you want to open this coffin and unlock a new character.

Patch 0.5.2 introduced a new coffin specifically for Gallo Tower that may throw you off if you’re not sure how to open it. Fortunately, it’s relatively similar to other coffins in Vampire Survivors aside from how to actually reach it. If you already have the Milky Way Map, just start Gallo Tower and use your map to find a question mark far up the tower.

Once you make it to the question mark, you may notice that it’s out of reach since it’s slightly off the stage. All you need to do is head to the left side of the stage, across from the question mark. As long as you’re in the right spot, there will be a pulsating mirror that you can walk into. This will teleport you to a small area with the coffin below you. If you get stuck on the other side of the mirror, just wait a little bit for the mirror on that side to let you back. It has a timer even if you enter it a second time.

Similar to opening every coffin in Vampire Survivors, you’ll need to defeat each nearby enemy. Once you’ve gotten rid of them all, you can interact with the coffin by walking on top of it. This unlocks the new character added in Patch 0.5.2, Concetta Caciotta.

How to Open Cappella Magna Coffin in Vampire Survivors You may want to get a few levels before spawning this set of enemies so you’re prepared to take them out.

Patch 0.7.2 introduced the new stage 5 Cappella Magna and alongside it a coffin as well. As goes with most coffin stages in Vampire Survivors, you can take advantage of the Milky Way Map to find a question mark. Simply make your way over to it to spawn a group of enemies.

As usual, you can’t open the coffin until you’ve dealt with every enemy that spawns from it. As shown in the screenshot above, there’s a small fence above the coffin that typically would block you. Since it all happened rather quickly, I’m not sure whether I broke it with a projectile or it disappeared on its’ own. Regardless, once you’ve dealt with every enemy you can step onto the coffin to unlock Zi’Assunta Belpaese.

How to Open Mt. Moonspell in Coffin in Vampire Survivors Depending on what character you pick, you may need to get a little stronger before running after this coffin. Fortunately, only one tough enemy seems to spawn for this one, however.

The Legacy of the Moonspell DLC added a new map where you guessed it, there’s also another coffin. Despite several other stages having a stage number or challenge tag, this one is just Special. Assuming you have the Milky Way Map, you can use the pause menu to find the question mark. This is near the top right hidden inside a building.

Also unlike other stages, Mt. Moonspell is a lot larger and has several areas where you’ll need to be careful. This is because certain areas have tight corridors or buildings with small entrances. Regardless, once you find the coffin inside, defeat the terrifying Tsuchigumo that appears. This is the purple creature moving on its arms and legs. Afterward, step on the coffin to unlock the character Miang Moonspell. That’s all there is to this simple guide on how to open the coffin in Vampire Survivors. What do you think of the new Dairy Plant stage? Did you know that unlocking this stage adds new enemies and other whacky events to the Green Acres?