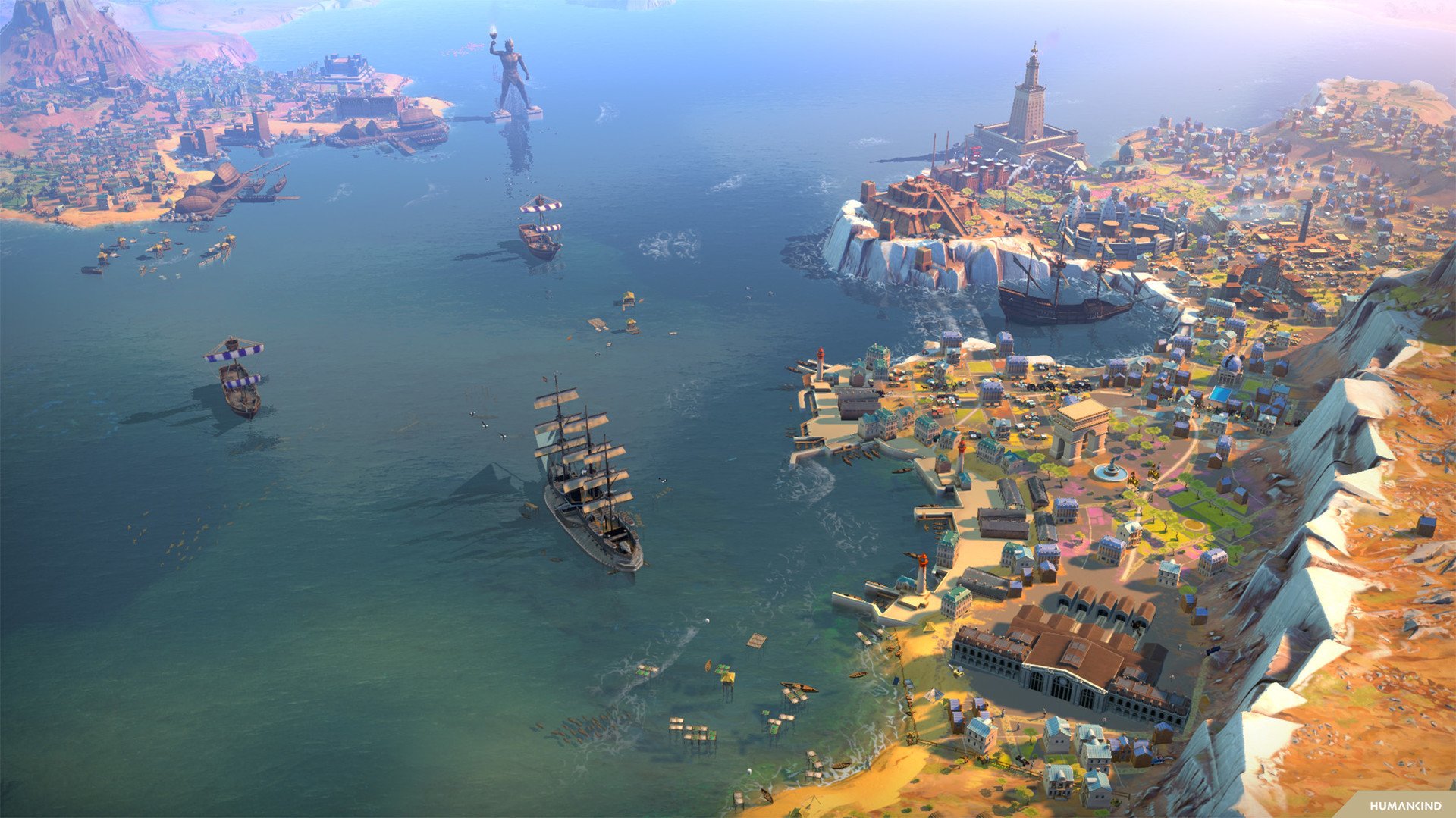 Scouting is an extremely important part of Humankind as it is in any strategy game. That includes exploring the ocean so you can find other continents and even islands to colonize. Plus, you can’t even interact with other empires until you’ve first met them. This is why you need to know how to embark units to explore the ocean.

Our Humankind guide below covers how to explore Ocean tiles, using land units in the water, and even a neat way to get 150 Fame. Continue reading below to learn a thing or two.

How to Embark Units in Humankind 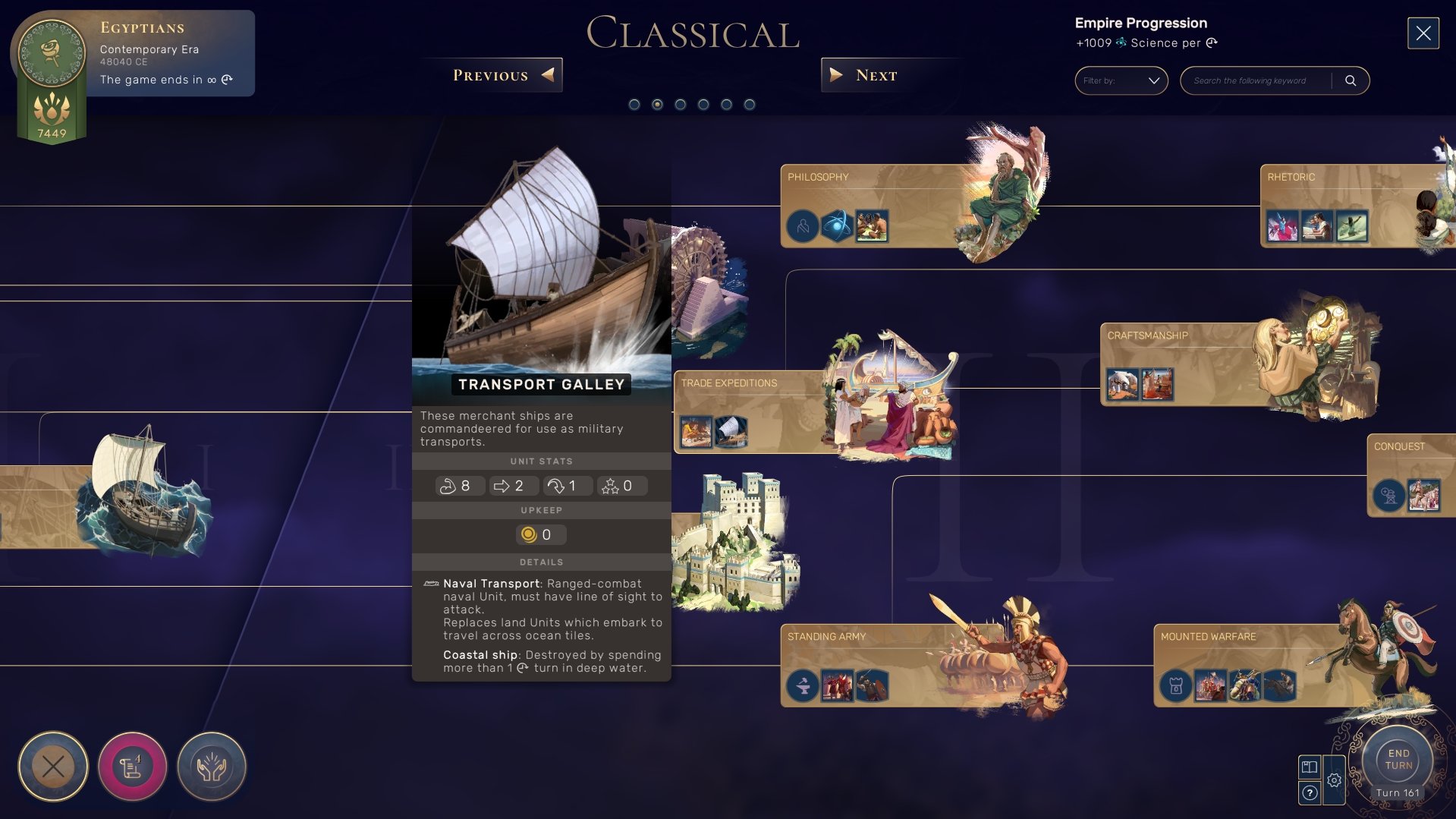 The Trade Expeditions technology is your first foray into embarking and sea exploration.

The first ship that lets you explore Coastal Water tiles is the Pentekonter. While you do unlock this ship with the Sailing technology, you still won’t be able to put land units in the water. You’ll need to continue researching one technology further to Trade Expeditions.

The Trade Expeditions technology unlocks the Transport Galley which isn’t an actual unit you can make. This unit instead replaces any land unit that embarks into the water. Which is why it’s extremely important to keep in mind that their military strength doesn’t convert over. Therefore, they’re much more vulnerable against ships like the Pentekonter. 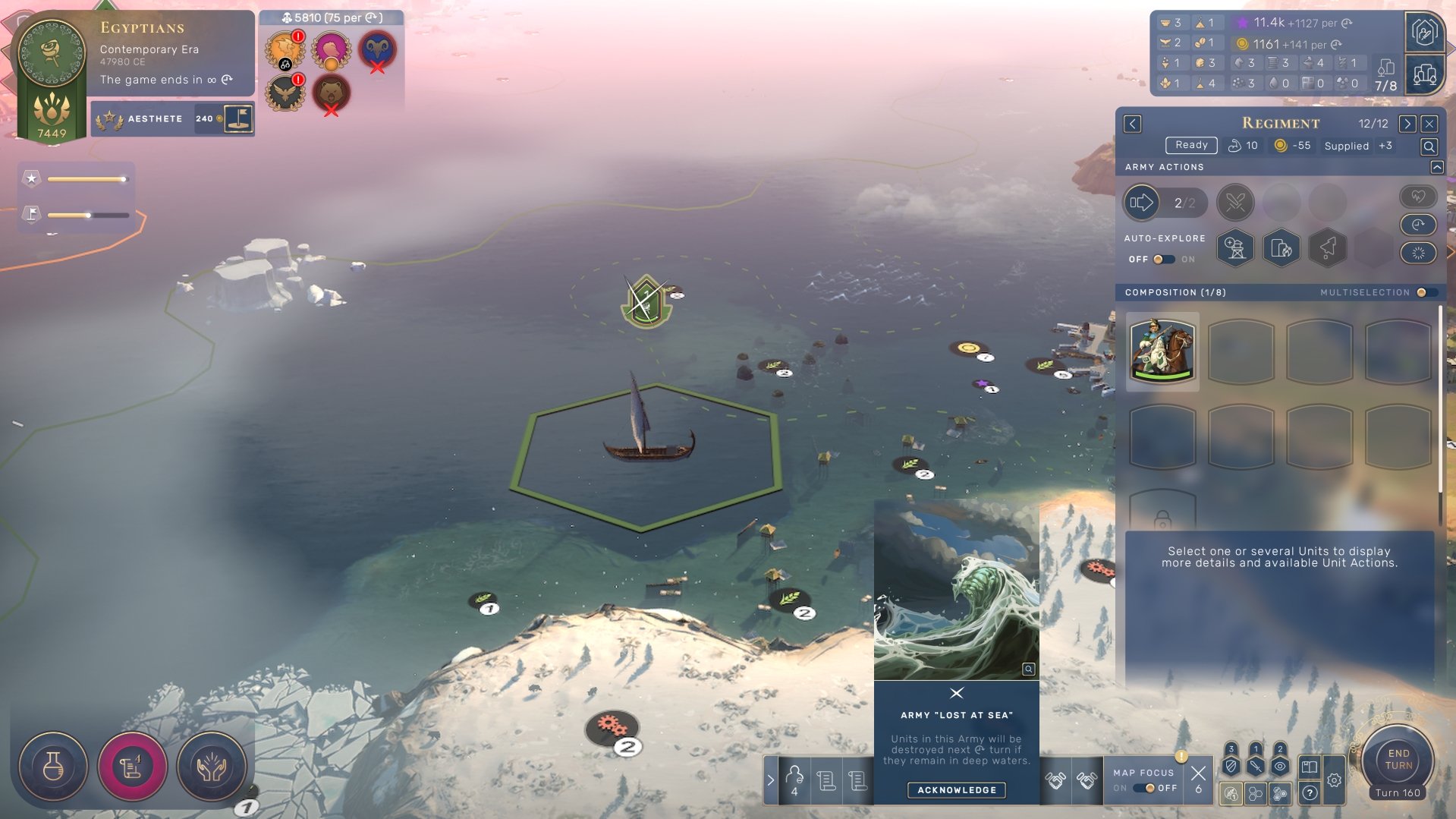 Beware of losing units to the ocean if you haven’t researched the Three-Masted Ship tech yet.

The Trade Expeditions technology has a penalty for attempting to explore Ocean tiles called, “Lost at Sea”. This means if you end a turn inside an Ocean tile and then don’t leave it on the next turn, that unit will be destroyed. Fortunately, you can still explore the edge of the Ocean by moving into it and then leaving. With that said, this isn’t the most efficient way to explore of course. 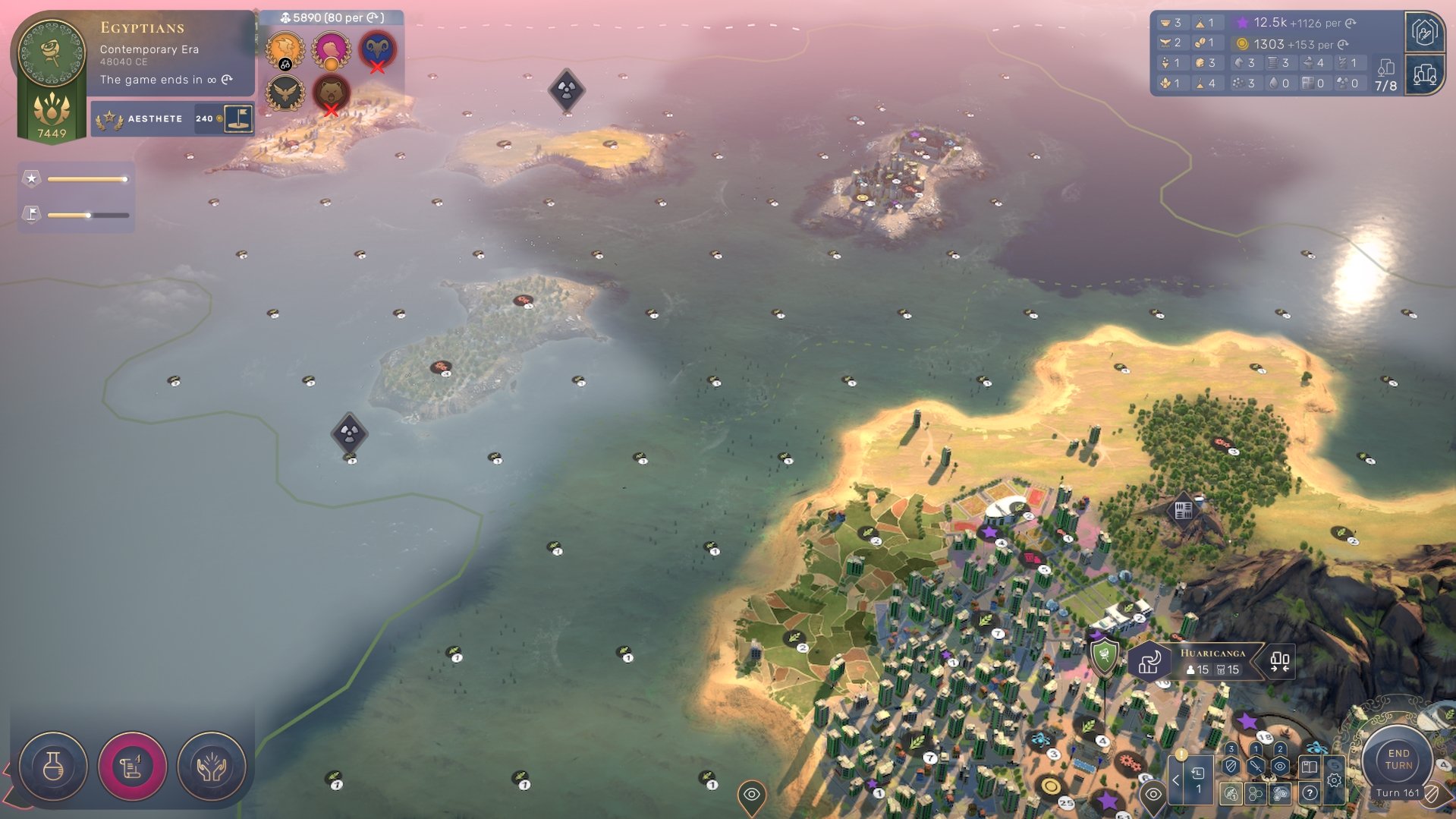 Be sure to explore along the coast because you never know what it’ll resources you’ll find.

But, you may come across another set of Coastal Water tiles that are only separated by a tile of Ocean. Make sure to take advantage of exploring along the coast because you may find land nearby.

The last ship upgrade for land units is the Landing Craft from the Amphibious Warfare technology. This has the Quick Embark trait which erases the need for Harbors explained below. Units can now embark and disembark instantly without spending movement points. You can take advantage of this when leading assaults into the water or onto land.

Don’t Forget to Use Harbors to Embark 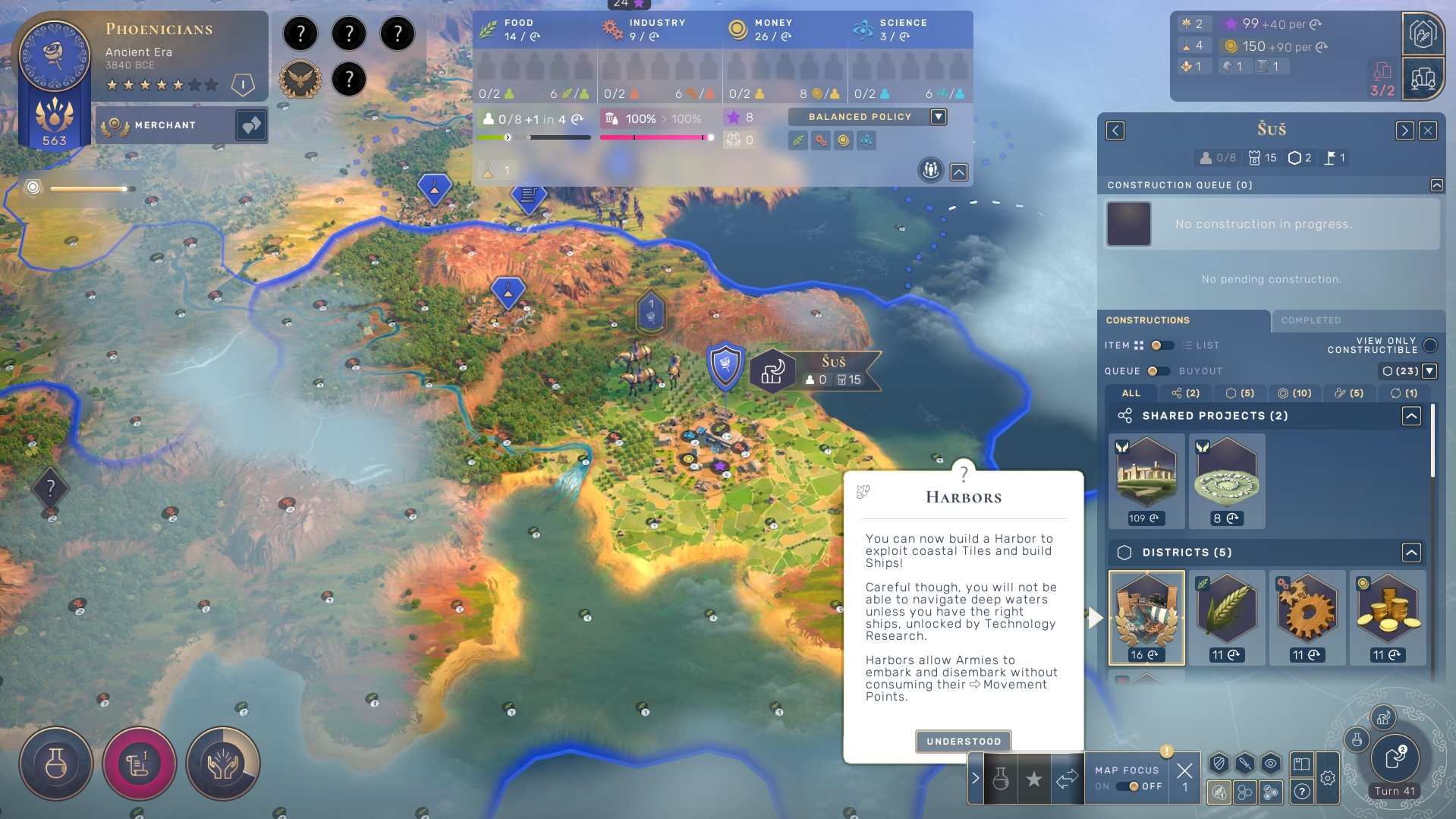 While you obviously need Harbors for spawning boats, there’s another useful trick too.

When you’re first starting out it helps to use Harbors so land units can embark without spending movement points. This can help offset the expensive cost of moving units between continents early on. Also, you’ll need to build a Harbor regardless if you want to make any ships.

This becomes the spawn point for any ships you create in a city. A fun trick is to instantly place a Harbor using Influence if you have an outpost not attached to a city. This is one of the few buildings that can be purchased with Influence.

Circumnavigating the World For Fame in Humankind 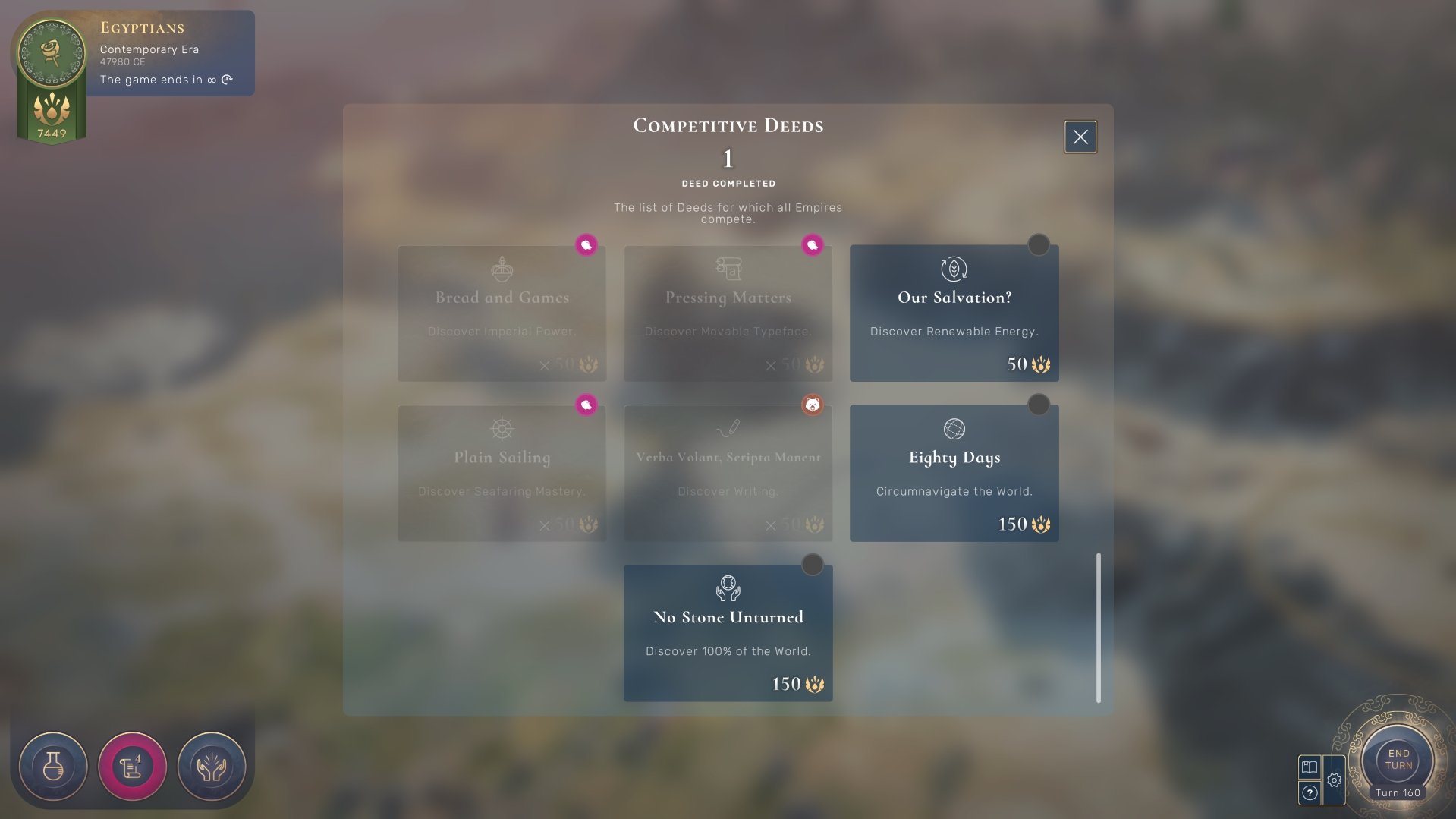 Getting fame is the name of the game. That’s why it’s important to get as many Competitive Deeds as you can.

Exploring your Humankind world isn’t just for scouting new territory. You can also get a Competitive Deed before the other empires for circumnavigating the world. The Eighty Days deed provides 150 Fame if you successfully explore from one side of the map to the other. I’m not positive if this works if you have the World Wrap option disabled in your game, however.

The Competitive Deed name is a reference to the book, Around the World in Eighty Days. Or if you’re like me and recognized it from the 2004 movie with the same name, featuring Jackie Chan.

That’s all there is to this guide on how to embark units in Humankind. Get out there and start exploring the ocean before your neighbors do. If you have any other questions for me, feel free to comment below. Or visit one of the many other common questions in the community below.

This is great, thanks! It took me 30 minutes of stumbling through the tech tree and encyclopedia before I guessed that land units aren't loaded onto ships, but land units turn into ship if you have the right tech.

Hey Patrick, glad to be of help. I wasn't sure how it worked for my first couple of runs either haha. I noticed a tooltip about it that's pretty hidden and that's how I figured it out. The Encyclopedia is great but it can be tough to find certain info.