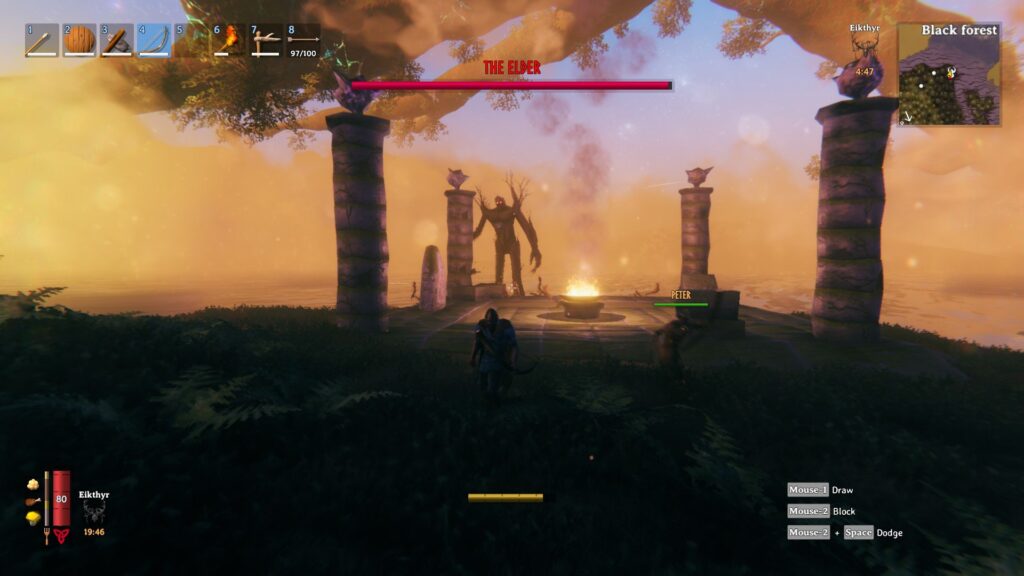 Learn about every boss in Valheim using our quick guide below. This article explains each boss briefly, what their rewards are, and the power you get for defeating them. If you’re not sure how to summon a boss or what to sacrifice at their altar, this guide also explains that. Click any of the bosses in the table below to get help.

How Many Bosses Are in Valheim?

There are currently five different bosses in Valheim that you can fight. It’s likely more bosses will be added at a later time as each boss is in its own biome. And there are currently a couple of biomes in the Steam Early Access version that don’t have content yet. Click any of the boss names in the table below to find information on them. 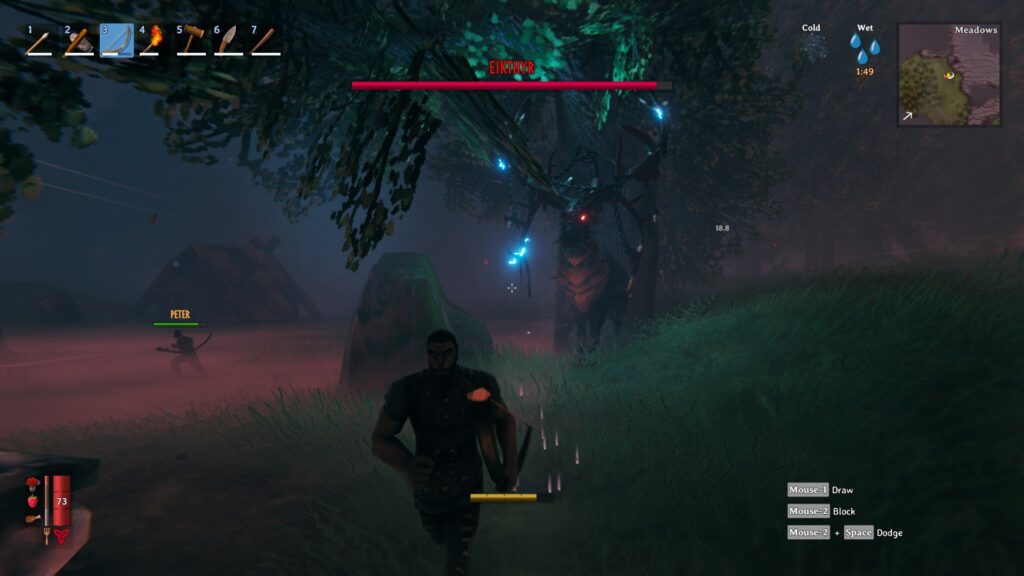 Eikthyr is a giant deer boss with electric abilities that requires two Deer Trophies to summon. This is the first boss you’ll fight in Valheim that you can mostly kite with arrows safely. Getting up close with early game gear is risky and likely not worth it due to Eikthyr’s electric attacks. However, if you have a shield, you can get away with blocking their melee attacks. The three main attacks Eikthyr has is a ranged electric attack, a charging ram, and a close melee stomp.

The Elder is a large ent-like creature that requires three Ancient Seeds to summon. You can get these primarily by destroying Greydwarf Nests that glow purple. This boss can be frustrating as they summon a ton of tentacle roots alongside nearby Greydwarves that like to get involved. So long as you strafe away from the roots, you can keep shooting at The Elder from a distance.

A useful trick while fighting this boss is to use the pillars around the sacrificial altar. The Elder has an attack where they shoot vines toward you that won’t go through the pillars. Their other attack is a melee stomp that deals damage around them. 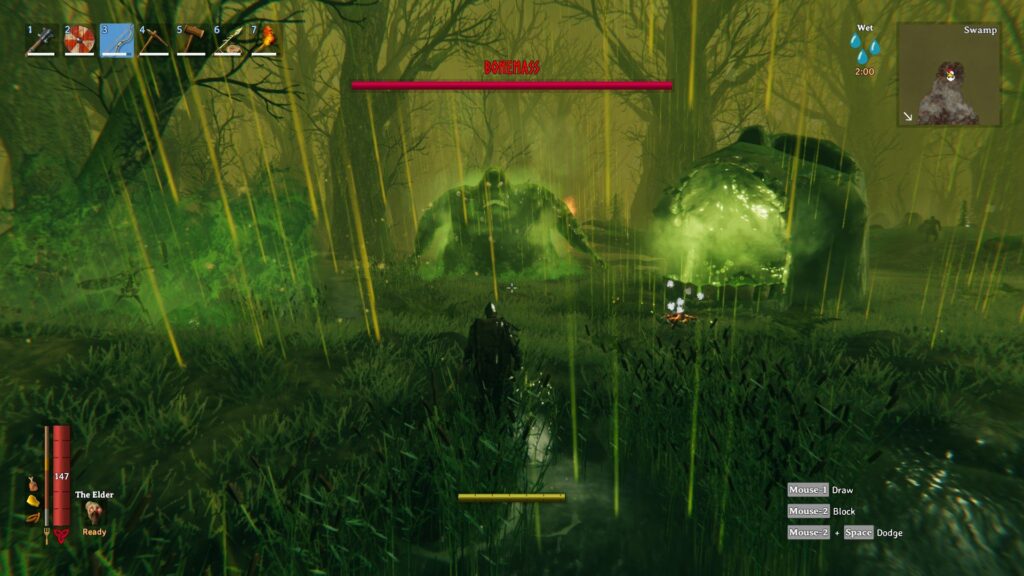 Bonemass is the third Valheim boss that requires 10 Withered Bones to summon. You can find Withered Bones in Swamp crypts. This can be a frustrating boss since they’re resistant to most damage, aside from blunt weapons. Take advantage of Iron maces or the Stagbreaker hammer for decent damage. Another useful tip for fighting Bonemass is to bring Poison Resistance Mead as Bonemass has a poisonous gas ability. His other two attacks are a melee strike and a summon that summons Skeletons, Blobs, and Oozers.

Unlike previous bosses, you won’t be able to fight Bonemass from afar as most arrows deal a tiny amount of damage. This is why you need to use blunt weapons in-between attacks to deal any damage. Frost Arrows from the Mountain biome supposedly deal decent damage to Bonemass, but you’ll need to make Frost Resistance Mead to survive the cold there. A video here via YouTuber MuertoGaming shows the Frost Arrows in action.

A common strategy/exploit many players use to deal with Bonemass is to build a base in a tree up high where Bonemass can’t reach. This may be updated at some point, but currently, Bonemass and their summons can’t hurt you. So this strategy works well for shooting down at them using a strong bow. Unless you use Frost Arrows as previous mentioned, it will take a lot of arrows to make a dent in their health. 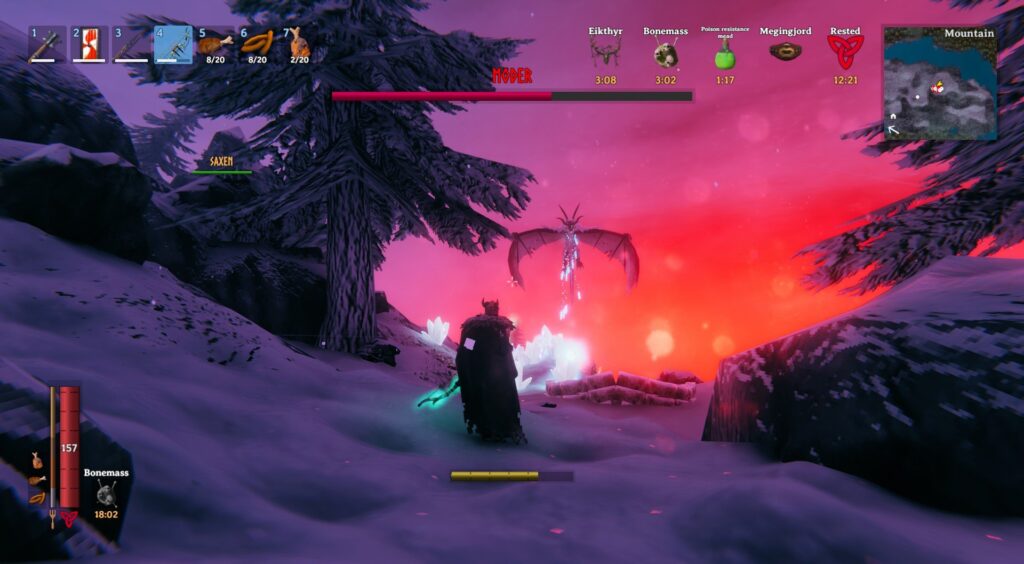 Moder is the fourth Valheim boss that requires three Dragon Eggs to summon. As Dragon Eggs weigh 200 pounds each, they can be a hassle to carry to the altar. These eggs are found randomly throughout the Mountains with Drakes spawning nearby. Before entering the Mountains, however, you’ll want a Frost Resistance Mead or Wolf Fur Cape to battle the frost elements.

The main strategy to fighting Moder is back to the early bosses, shooting arrows from a distance. Their main attacks are a swipe in front of them, a frost breath that slows players, and a ranged attack while flying. If you have Wolf Armor from silver and a Silver Shield, you can block most of Moder’s melee damage.

Unlike Bonemass, you can deal normal damage to Moder with almost every attack type. They don’t seem to have a yellow damage vulnerability. Damage over time arrows like poison and fire are useful, but you’ll really pummel Moder with Needle Arrows from the plains. 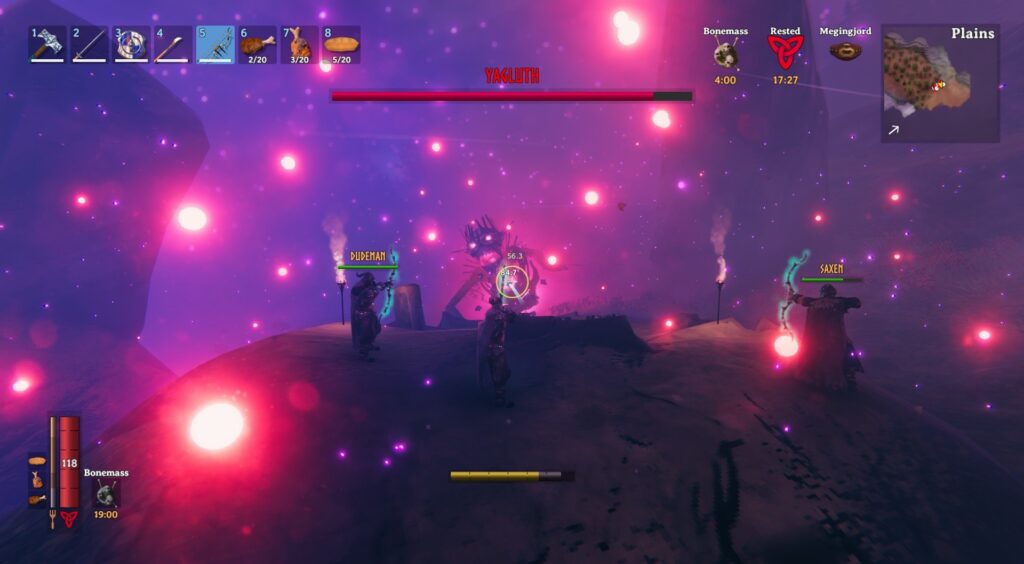 Yagluth is the fifth and final boss currently in Valheim’s Steam Early Access. You can summon them using five Fuling Totems that you get from Fulings in the Plains biome. This boss continues the bow strategy unless you’re playing with other people and can distract Yagluth while another player moves in with melee.

The main attacks to watch out for are a slamming fist attack with a fire AoE, one that summons a meteor storm, and a long-range fire breath attack. Only Fire Arrows and Silver Arrows deal damage over time to Yagluth.

If you have any tips and tricks of your own for a boss, be sure to comment below to help other players out. Also, feel free to ask us any Valheim questions you may have in the comments too. Otherwise, for more Valheim guides, visit the guide hub. Or take a look at one of the useful guides linked below.