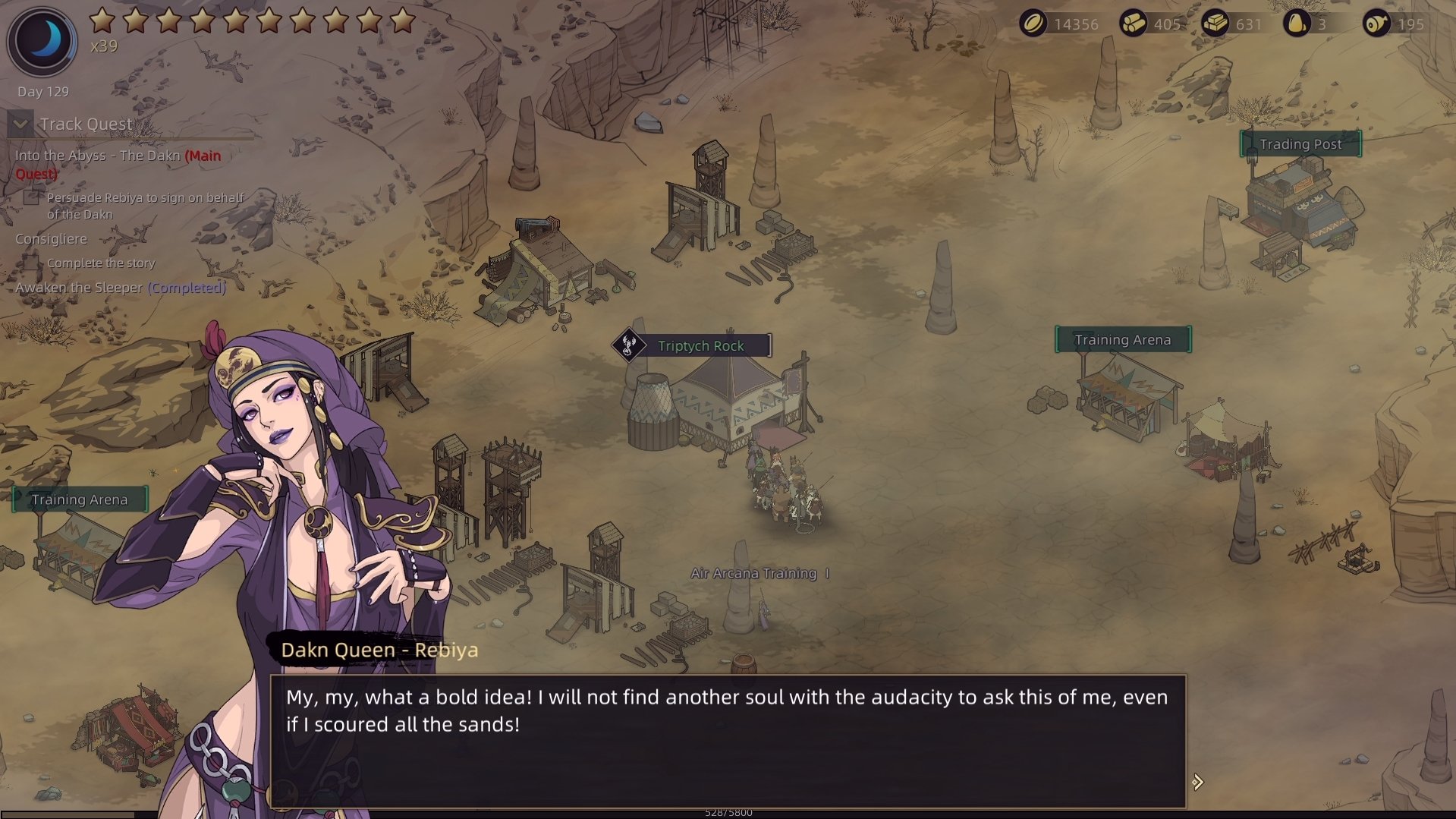 If you’re looking for a Sands of Salzaar walkthrough regarding Into the Abyss – The Dakn, that continues from Negotiations, you’re in the right place. This main quest starts after you finish talking to Ilayda outside the Fire Barracks in Crying Rock Continue reading below for the walkthrough.

Into the Abyss – The Dakn Walkthrough

If you’ve made it to this point in the main questline, you likely know that there are five separate main quests for Into the Abyss. This walkthrough specifically follows The Dakn one where you’ll have to convince the Dakn Queen – Rebiya to sign a peace treaty. Also, this walkthrough has three other quests that follow this one, they’ll be mentioned below with their own headline.

Your first step to finding Rebiya is to head toward her main region, Crying Rock. Once you get here, you should open up the map using “M” by default and hover your mouse over each city looking for her name. It will appear near the top alongside “Characters”. Depending on territory changes since you’ve been playing Sands of Salzaar, she may rule a different city than when the game first started. She owns Triptych Rock when you first create your character and often rests there. Otherwise, wander around Crying Rock because she may be patrolling the area.

Once you find Rebiya, ask her about signing the treaty, and this will lead to a new quest. She’ll ask for a favor bringing someone named Dahlia to her in exchange for signing the treaty. She recommends finding a merchant named Jihan in the Halfmoon Hills Bazaar. This will start the next quest for The Dakn signature.

Into the Abyss – Jihan 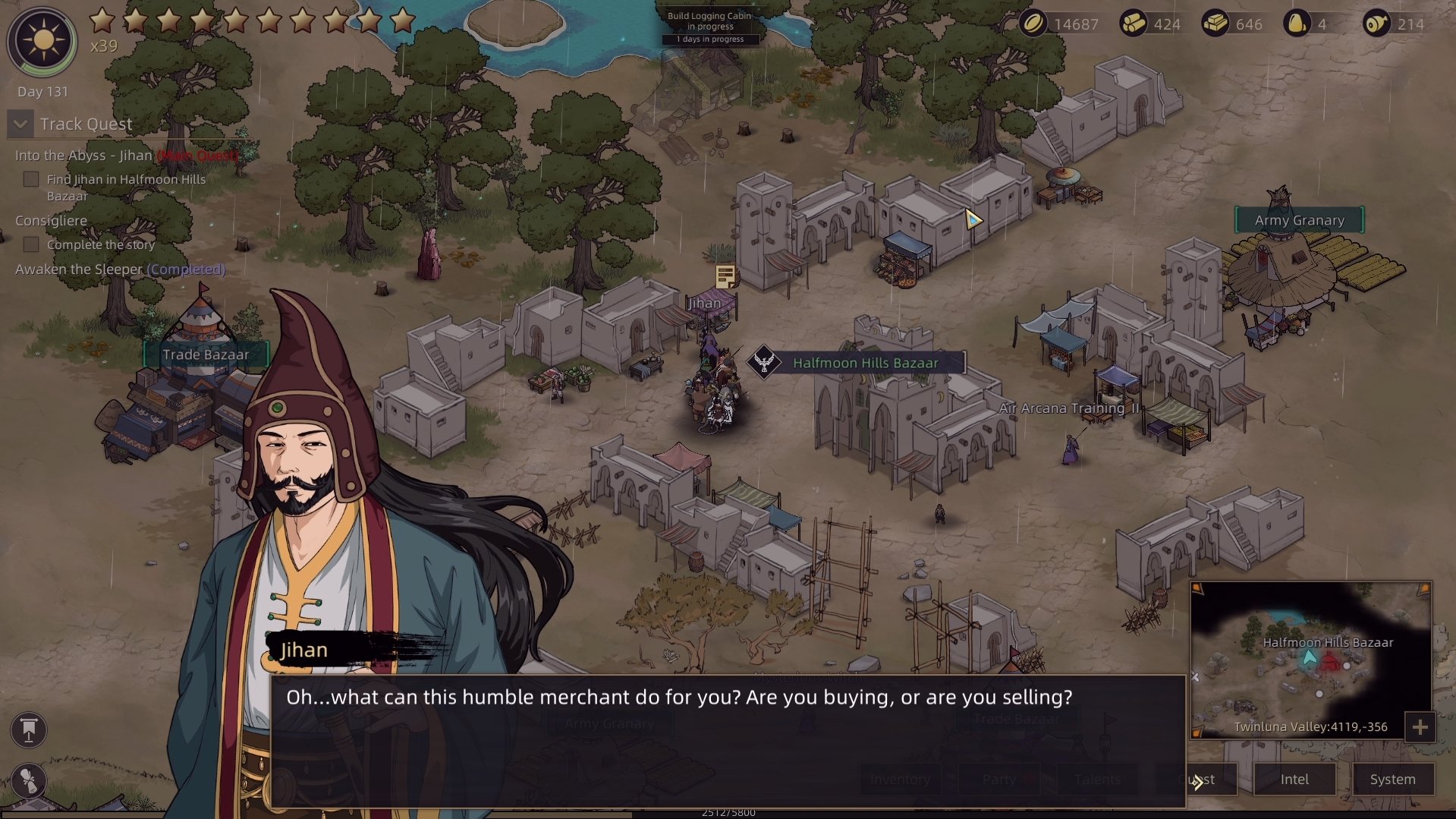 Make your way to Twinluna Valley to find the Halfmoon Hills Bazaar near the center/east side of the area. You’ll find Jihan standing outside the city where you can talk to him directly. From one favor to another, now you’ll need to help Jihan deal with a mysterious shadow lurking on his home wall at night. Despite not being able to figure out what it is, if it’s a person, if it’s a spirit, etc., he asks for your help figuring it out. In exchange, he’ll get you Dahlia if you can solve the mystery.

Into the Abyss – Haunted House 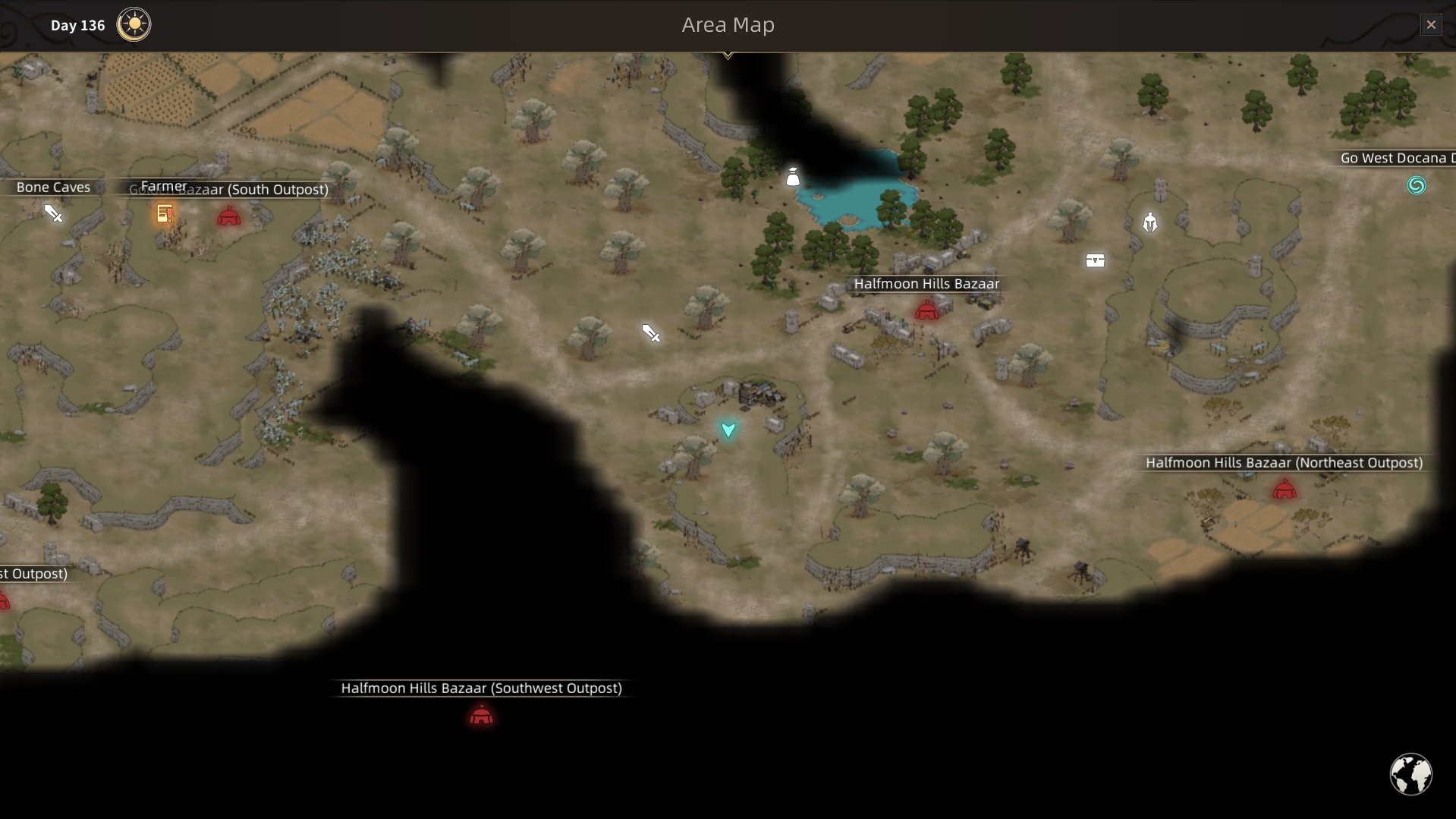 Jihan will mention that his house is southwest of here, up a hill, with three guards outside named Pig, Dog, and Ox. If you have trouble finding his house still, it’s marked on the map above where my blue arrow is. Once you find the three guards, it’s important to try and remember the answers you get from each of them regarding your questions. You can ask each of them where they were that night and what the shadow looked like. Based on these answers, you’ll have to decide which one of them is the mysterious shadow.

To complete this portion of the quest, you just have to talk to them several times and the quest objective will tick off clues. It doesn’t matter if you talk to the same person or not. The main goal is to figure out who the guilty person is. When I first did this quest, I didn’t realize it was important and guessed that it was Pig. This was wrong, so if you find out the correct answer, please let me know in the comments. I’ve jotted down some notes from what they’ve said. 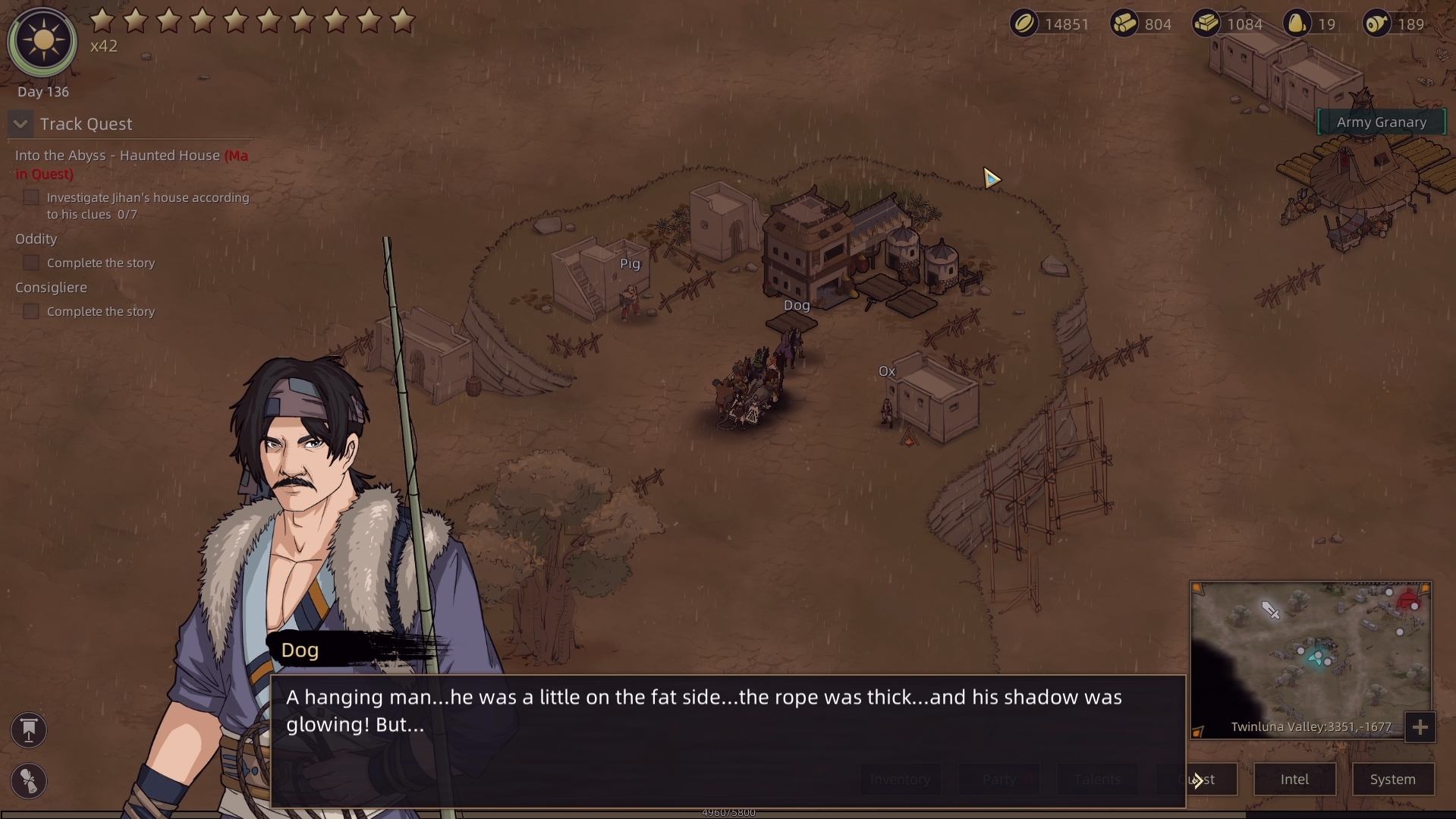 Once you’re finished questioning the guards, return to Jihan and let him know which person you think it was. This will complete Into the Abyss – Jihan and he’ll tell you to wait three days while he gets Dahlia. If your choice was wrong, you’ll have a difficult battle when you find Jihan in three days. But, you’ll still get Dahlia so long as you win the fight.

Into the Abyss – Dahlia 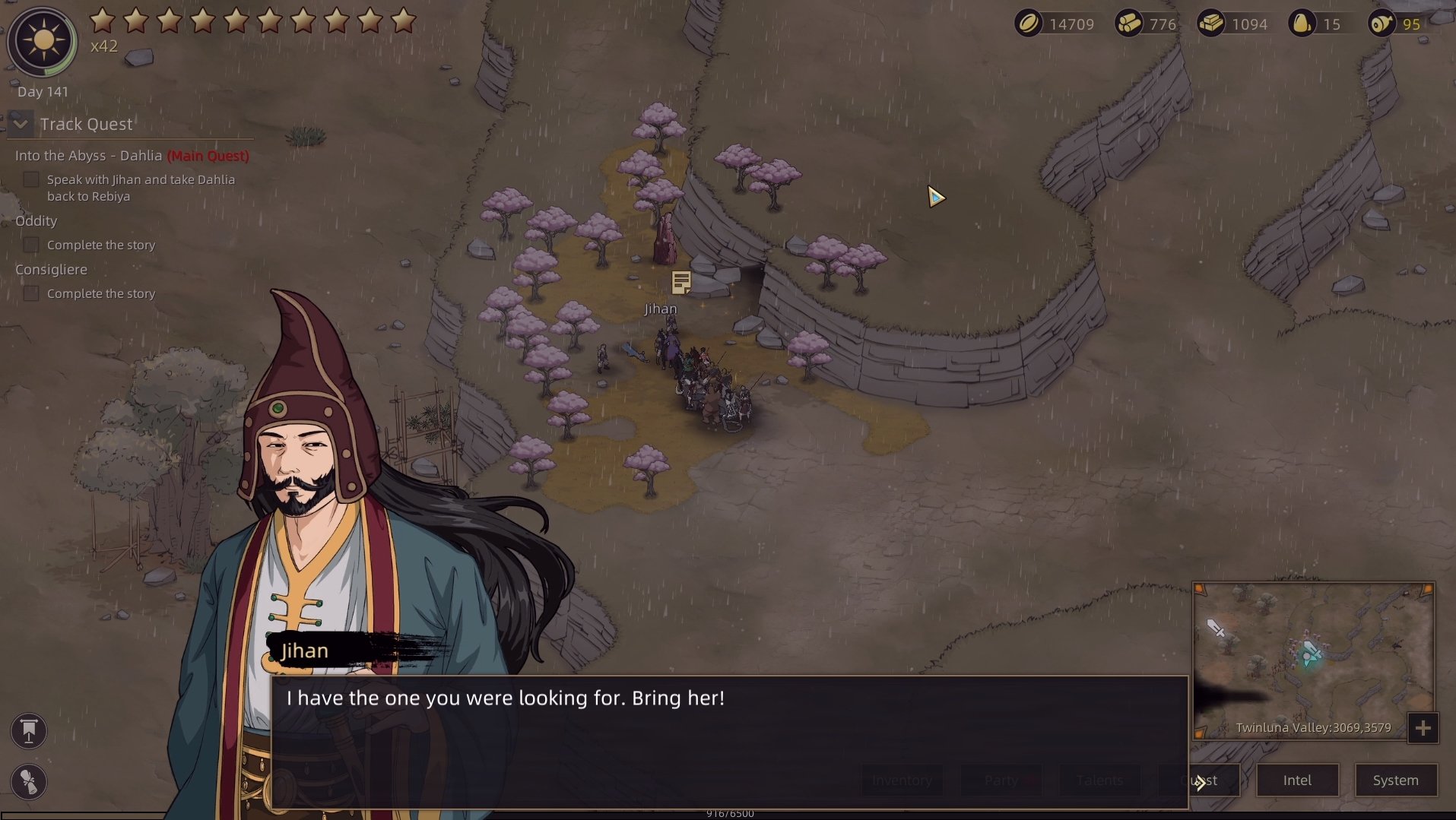 You’ll get a message when the three days are up saying to, “meet at the forest by the lakeside, to the north of Halfmoon Hills Bazaar in Twinluna Valley.” You’ll have to go a little past the lake forest toward an area with cherry blossom trees/pink trees. Jihan’s name will appear on the map if you have trouble finding him. Once you talk to him, he’ll bring out Dahlia, but he’ll send his guards after you if you were wrong in the last quest. Upon successfully dealing with his guards, you’ll get a message that he disappeared, but Dahlia is laying on the floor.

Despite your efforts to find out more about why Rebiya wants Dahlia, she says nothing. Complete Into the Abyss – The Dakn by returning to Rebiya in Crying Rock. Upon delivering Dahlia, you’ll find out a little information about why she wanted her. Then, Rebiya will sign the treaty completing this quest.

It's Ox. He lit a candle and used the doll (it has two braids) and a candle to Plato's Cave the ghost. The candle burned a hole in his shirt and he was stationed close to a wall that had a hole in it.