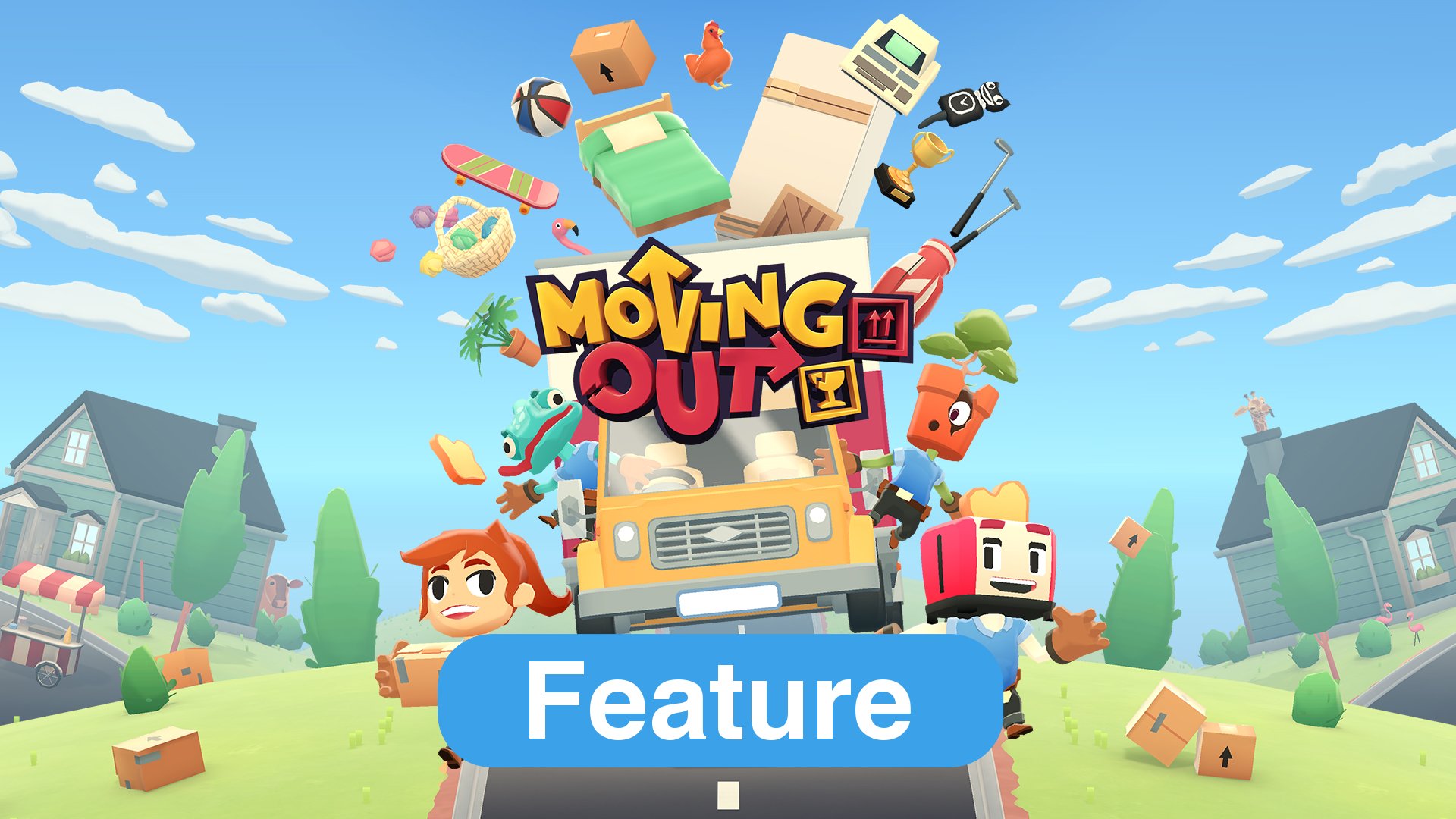 Have you ever moved furniture across alligator-infested water? Welcome to one of the many silly challenges in Moving Out. As a certified Furniture Arrangement & Relocation Technician, I joined the Smooth Moves company for this physics-based simulator. It follows the same chaos and hilarity that some may recognize from the Overcooked games.

Prepare to conquer the challenges of moving furniture in an odd town with me.

Step 1 – The Client Signed a Waiver 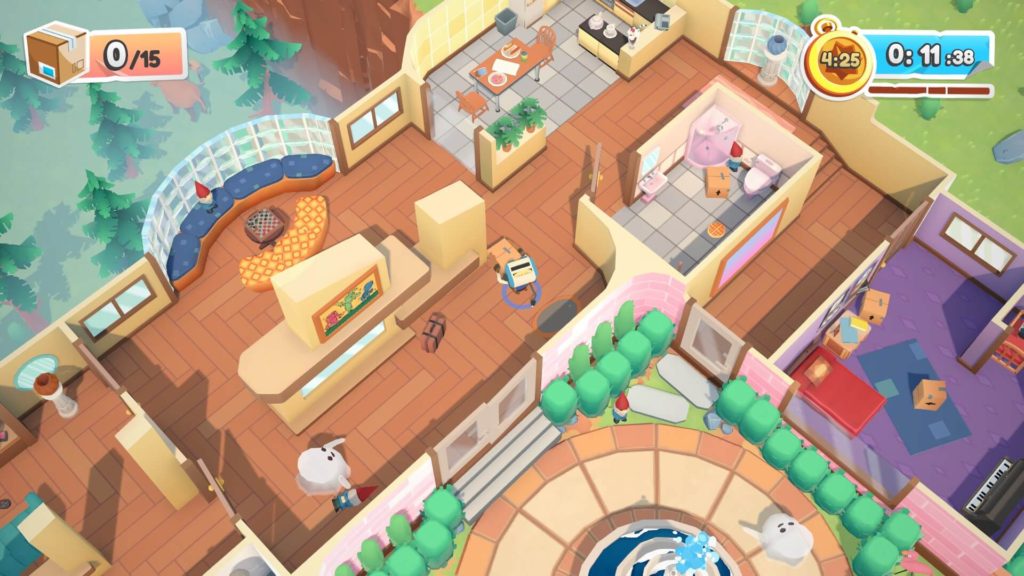 “The client signed a waiver so don’t worry about smashing stuff.” – The Boss

This loading screen message is probably the best way to describe Moving Out. Getting every piece of furniture outside a house is easy when it doesn’t matter how. Whether that’s throwing a radio or dropping a couch off a second-story building. Either way, the moving insurance is here to save us.

Step 2 – Windows Are the Real Doorways 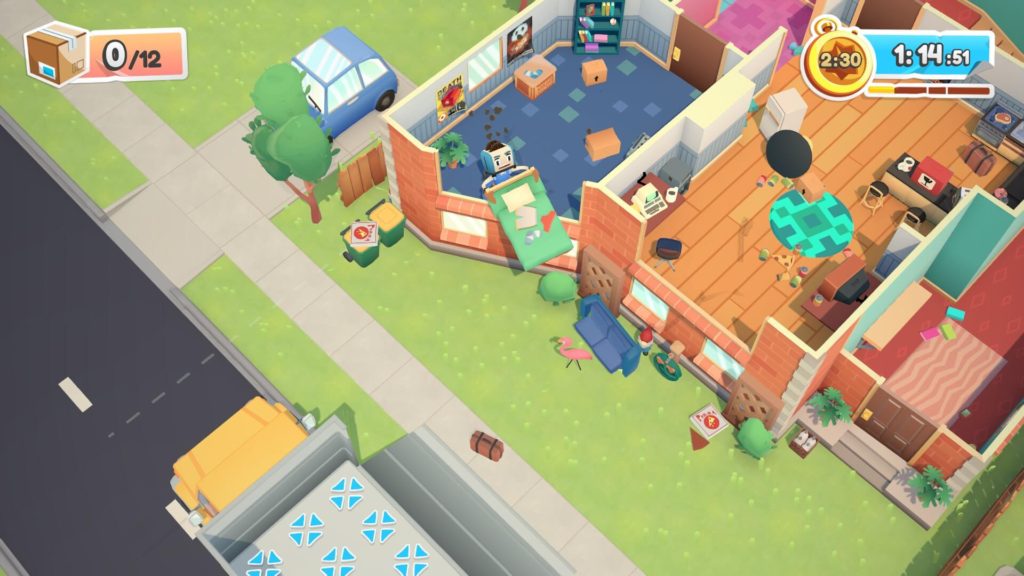 When one door closes, a window opens.

The most frustrating part of moving furniture in both real life and in-game revolves around doorways. For some reason, that couch doesn’t fit through the doorway it once came through and it makes zero sense. So why bother carrying it through a narrow hallway when you can simply toss it through a window? If Moving Out has taught me anything, windows are the key to easy moving.

Step 3 – Rip Cables Right Out of the Wall 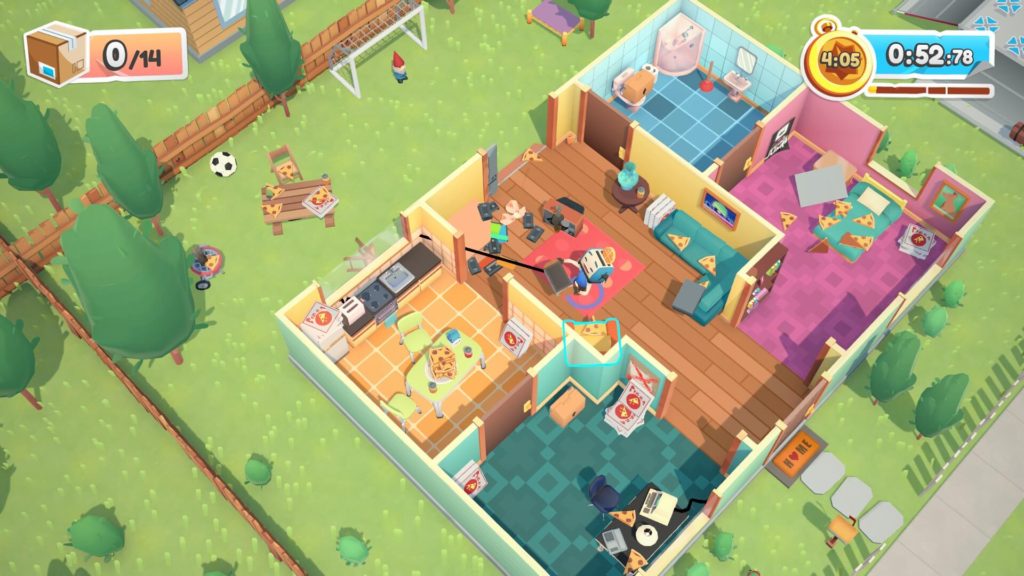 Electrical work can get messy with all sorts of cables and wires attached to different devices. When you’re forced to do a job quickly, you have to ask yourself, is there a better way? Well, boy do I have good news for you. As we already know, the client signed a waiver, and that means rip everything out of the wall! The job is to get everything to the moving truck, not to get it there in good condition.

It’s not like the homeowner is keeping an eye on you. But, there is that gnome that always seems to be around. 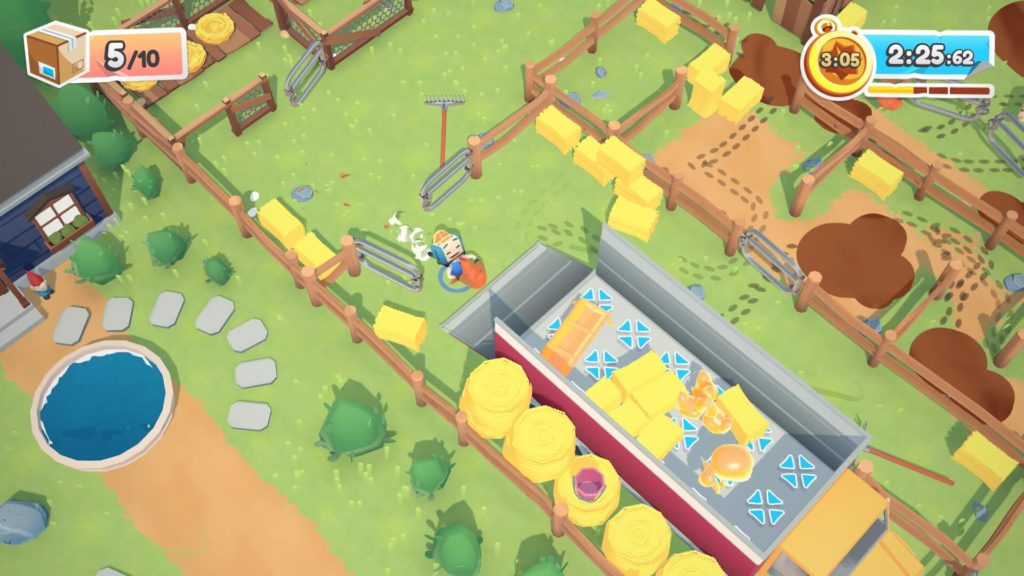 Chickens and sheep and pigs, oh my!

I knew I’d be moving furniture, but who said anything about animals? At least the sheep and turtles seem like they’re trying to help move furniture. The chickens, however. Those are the ones that run forever and always seem a little devious. Good luck herding every tiny chicken to the truck! 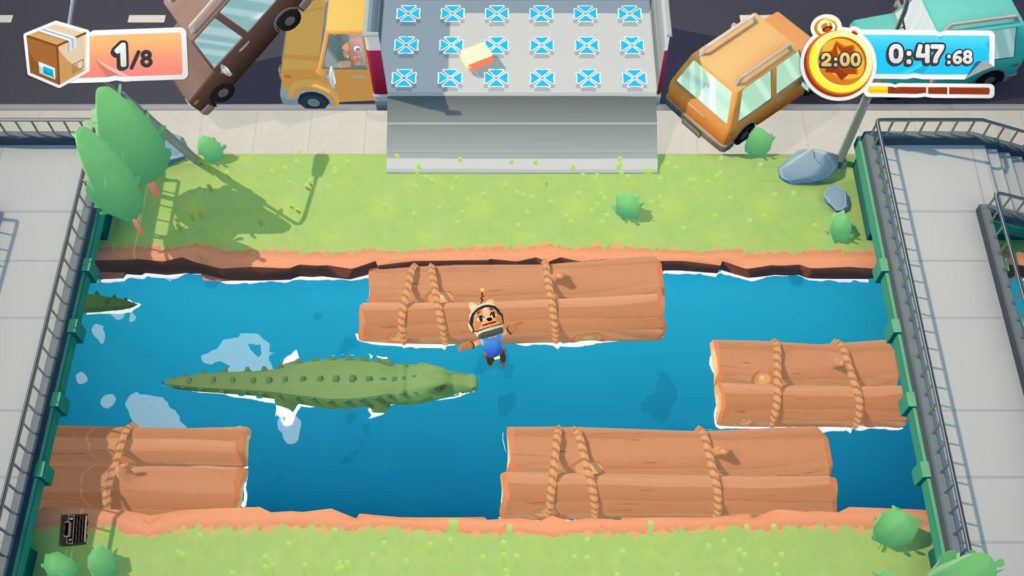 If I ever need to move furniture across alligator-infested water, I might skip that job instead. I don’t know about you, but I don’t trust an alligator to let me walk across their back. Alligators aside, families love having pools and fountains on their property that add to the challenge. And what can I say, sometimes the best way to move, is to throw boxes across that water. There’s a reason Smooth Moves is the third-best moving company in town.

Step 6 – You Have to Get Creative 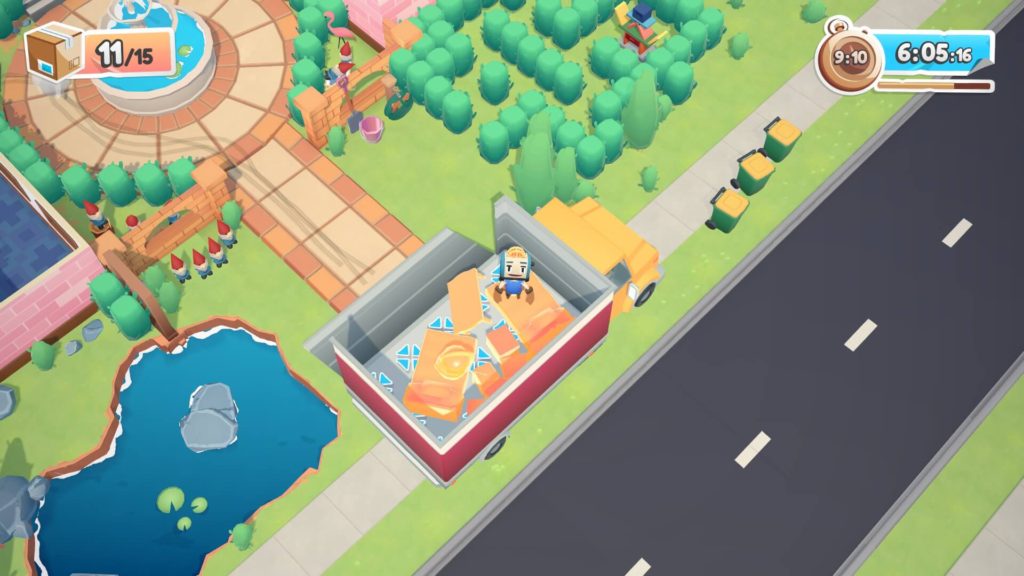 Are the gnomes invading houses in this town?

I used to unpack large shipments and those packages were in there tight. Moving Out feels a lot more like, squeeze everything into the truck in a chaotic mess. It doesn’t matter how well organized the furniture is if it all fits inside.

While I mentioned doorways are one of the more annoying parts of moving, there is a simple solution. Remove the door and jam the furniture through until it fits. This may sound similar to pushing a circle shape into a triangle hole, but somehow, it works. And if anyone asks, remember the waiver.

I’m not the only one seeing these gnomes, right? 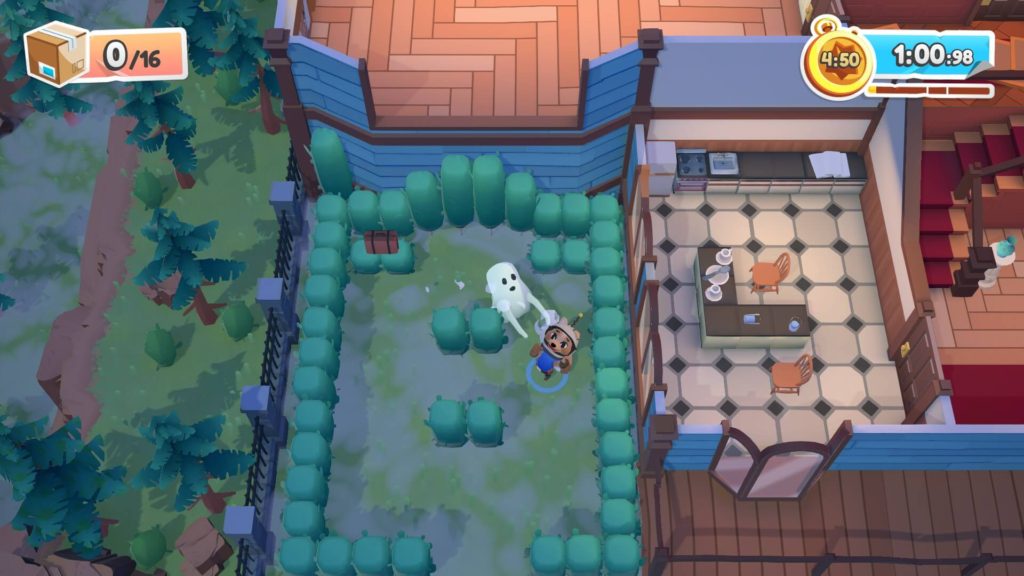 Why can’t the ghosts move the furniture themselves?

Moving companies in the town of Packmore must really have their hands full. We’ve got alligators, devious chickens, pools, and odd gnomes. But why stop there when you can toss in haunted houses with spooky ghosts. Now I can’t decide whether I prefer the alligators or a haunted house named Dread Manor.

Terrifying green water dinosaurs or floating chairs and ghosts? Not to mention, lurking knight statues that probably have gnomes hiding in them.

Step 8 – Everyone is Welcome 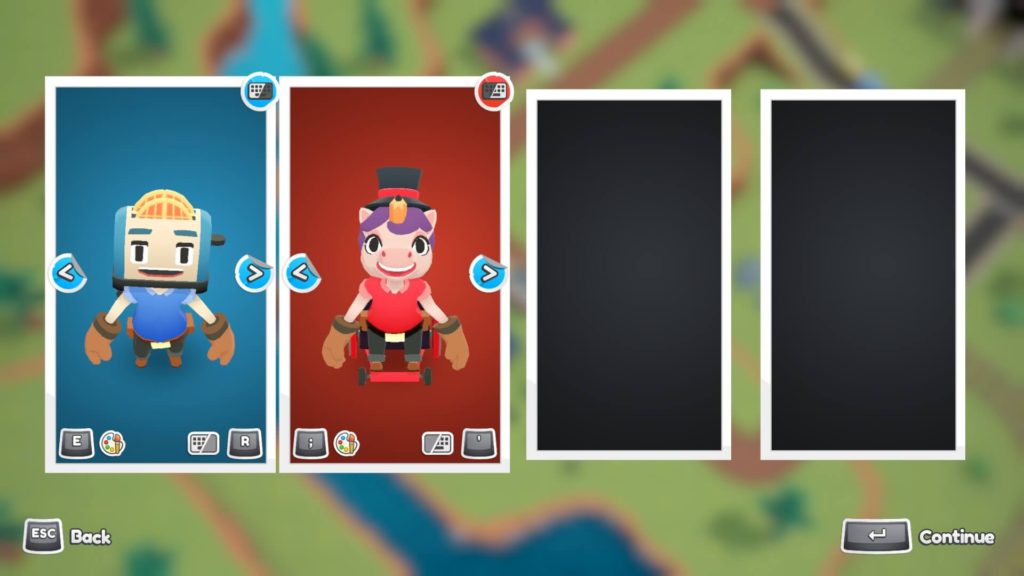 The wacky cast of characters in Moving Out benefits from a wheelchair option too.

Before even starting Moving Out, it’s clearly a silly game in both its art style and character choices. If you’ve ever wanted to be a living toaster, the developers at SMG Studio and Devm Games have you covered. I won’t question it. Other examples include a unicorn, a cat with an eye patch, and a person with a sunny side-up egg head. More than anything, I appreciate every character having the ability to play from a wheelchair.

This decision comes alongside other inclusive efforts with the addition of an assist mode. Moving Out is a great family game that benefits from a customizable difficulty. Options include longer time limits, lighter furniture, reduced difficulty/hazards, and more.

Take a look at our previous Moving Out coverage for some gameplay.

Moving Out released on April 28, 2020, for PC via Steam, Xbox One, PlayStation 4, and Nintendo Switch. The PC version doesn’t support online multiplayer, but Steam’s Remote Play Together feature functions as a workaround.

Moving Out was provided by the publisher via a Steam code.