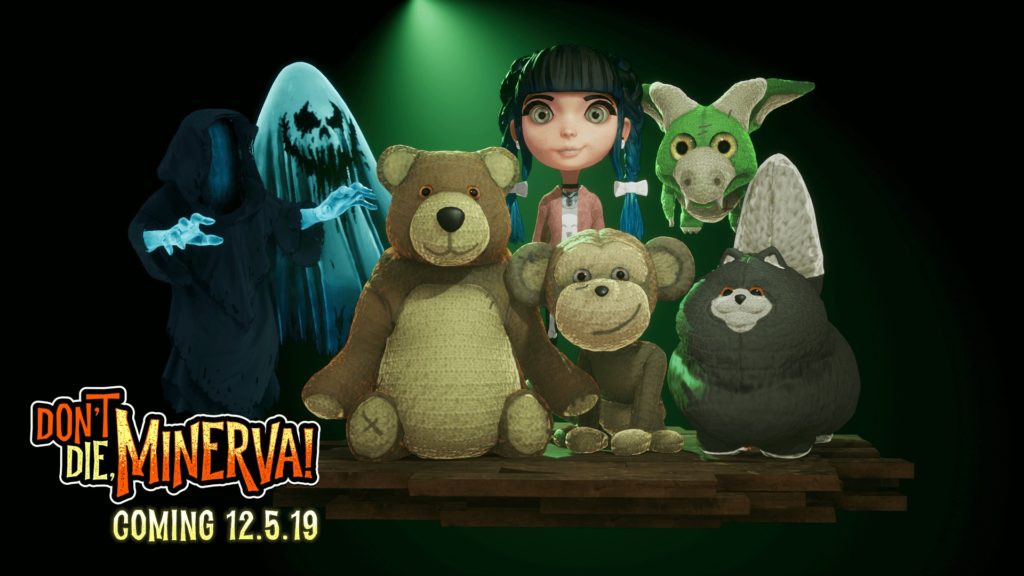 I’ve always had a soft spot for the roguelike genre because of how much content you can get out of those games. There’s something captivating about every run feeling different from the last through the use of procedural generation. Don’t Die, Minerva! is no exception in being another enjoyable roguelite for people that love a challenge.

Don’t Die, Minerva!’s worldbuilding is a little weak as the story only focuses on small and infrequent dialogue. While major narratives are rare in the roguelite genre, it wouldn’t hurt to have a little more incentive. Don’t Die, Minerva! kicks off with an 11-year-old girl using a flashlight to fight ghosts and more in a haunted house. A few friendly ghosts and one villain feels too much like a missed opportunity to expand on.

Fight Spooky Creatures with a Flashlight 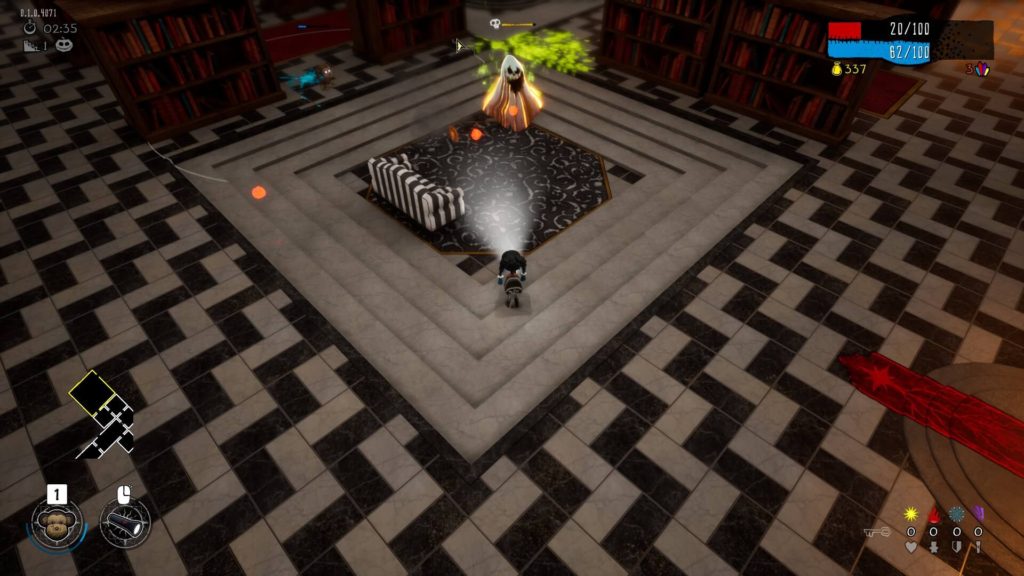 Golden glowing enemies are a little tougher with unique attacks that make them different.

Creatures like ghosts, bats, and many others lurk the haunted house. Don’t Die, Minerva! plays room by room with an elevator on each floor for progressing further. Every few floors lead to a boss and a new area with a change of environment and enemies. The challenge lies in clearing every room filled with a mixture of enemies and traps.

Developer Xaviant Games uses a form of meta progression common in roguelites with permanent upgrades. Minerva can find upgrade points known as Essence Crystals scattered throughout the haunted house. Despite disappearing on death, a special room on every floor is an opportunity to use those crystals toward upgrades. 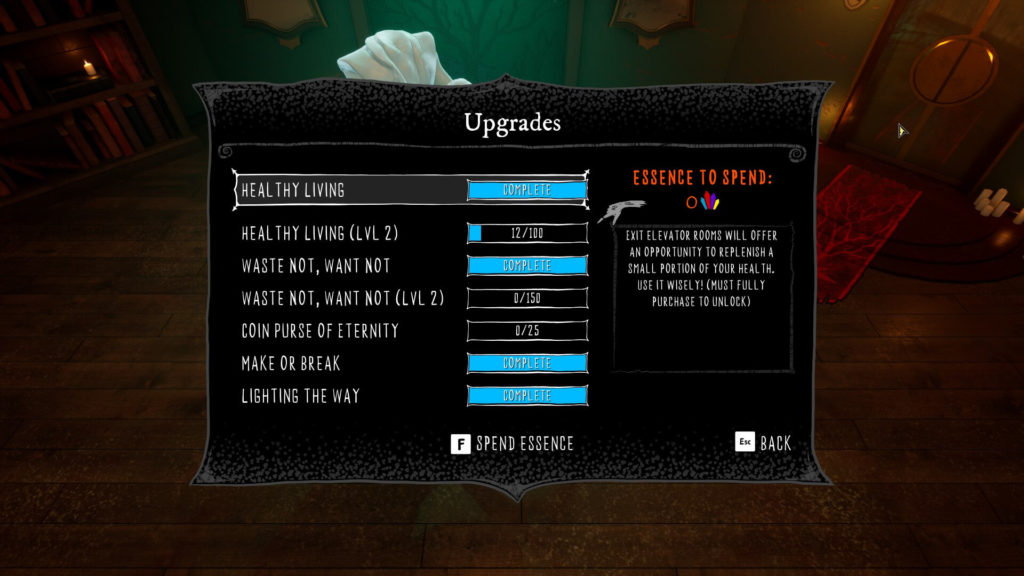 Certain upgrades function as a quality of life change more than providing a crutch. For example, one upgrade unlocks teleporting to any cleared room on the current floor. Without this perk, it’s unbearable running around like a chicken with your head chopped off. On more than one occasion, I’ve explored every room in one direction and ran back to the first for a different path.

The meta progression isn’t overpowered compared to other roguelites, however. The majority of upgrades don’t directly impact Minerva’s health or damage. Instead, they provide opportunities to find more loot or potions for restoring health. By doing so, Don’t Die, Minerva! has a sweet spot between lowering the difficulty and still feeling accomplished.

Every piece of gear is an opportunity to create the best build for Minerva.

Combat in Don’t Die, Minerva! revolves around slaying creatures with a variety of flashlights. Every piece of gear Minerva wears contributes to stat modifiers and bonuses. These vary from adding more health to taking less damage from traps. This creates an interesting metagame in deciding how to best build your character toward your preferences.

Making progress through the haunted house is met with new boots, backpacks, flashlights, and gems for attributes. The four attributes Physical, Flame, Ice, and Voltaic build toward different ways of playing. For example, Flame encourages the use of an interesting and cute mechanic in Don’t Die, Minerva! Stuffed animals provide a helping hand as a small summon. The default starting animal is a monkey that throws bananas at nearby enemies. The Flame attribute builds on this by increasing their damage.

Other attributes such as Ice reduce damage taken and increase a chance at freezing enemies. This is where the potential for mini-builds comes into play. The Sapphire gem always adds to Ice and slows down enemies hit by your flashlight. Combining similar gear and gems are a great way to create a successful build. Another example of a gem’s element is knockback when using Quartz on a flashlight. 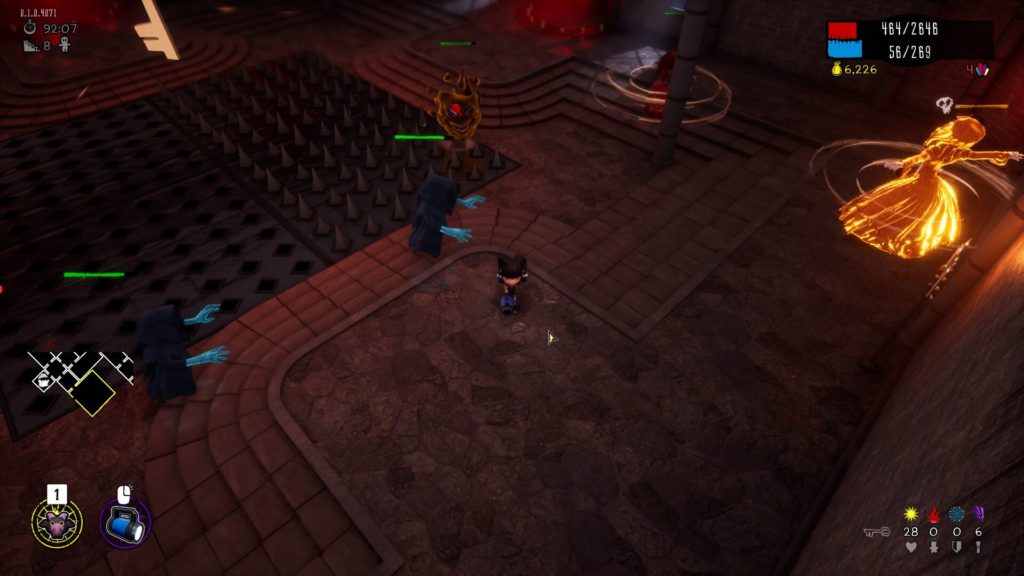 Make sure to dodge away from enemies when they swarm in too close!

My first successful run in Don’t Die, Minerva! was on the easy difficulty and it dragged on near the end. My main complaints are most enemies become too tanky, and unfortunately a too common bug. First, the early floors are balanced well to not feel too easy or difficult. However, the final floors are rough when combined with a repetitive blocking mechanic. Many enemies use a glowing white shield that blocks attacks from the front.

Enemies that use this shield with a tanky health bar tend to create a boring combination. I frequently ran around a room kiting enemies for way too long because they wouldn’t die. I couldn’t figure out if I didn’t upgrade my damage enough or if the balance was off. The unfortunate recurring bug is that this shield isn’t always visible.

On the bright side, the developer already has a content update with fixes less than two weeks since launching on Steam Early Access. This keeps me hopeful for balance changes and common bug fixes.

Is Don’t Die, Minerva! Worth Buying? 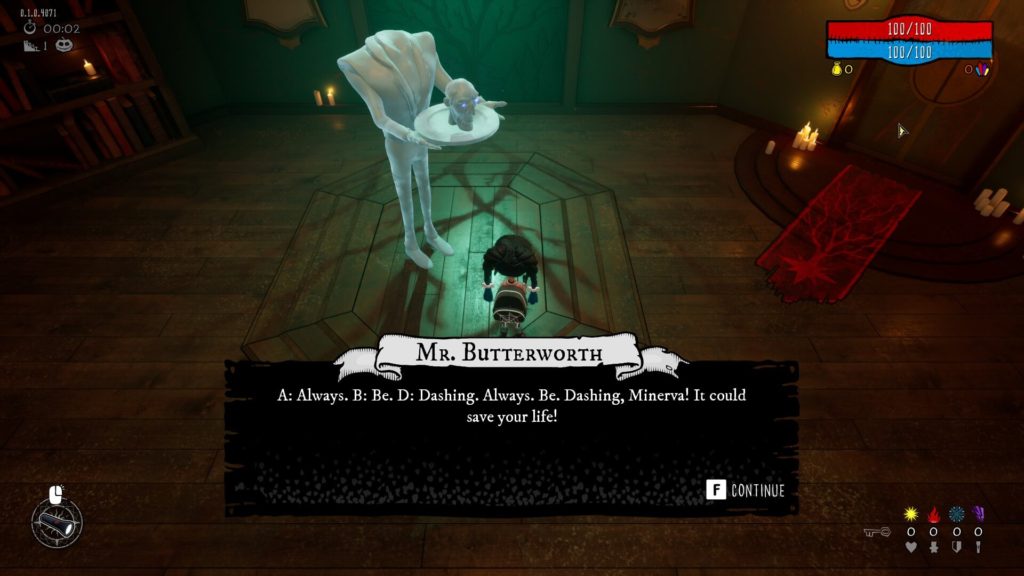 Mr. Butterworth may be missing his head, but he’s still here to give advice.

Don’t Die, Minerva! is a cute roguelite that stands out from the rest. The price drop to $12.99 on PC easily makes it a steal. I’d like to see what the developer does with Steam Early Access and how Don’t Die, Minerva! improves from it. Right now, it’s worth a solid eight to ten hours before it begins to feel repetitive. I primarily wish there were a more compelling story to make it feel more rewarding.

If you like roguelikes, take a look at our tips and tricks guide for Noita.

Don’t Die, Minerva! released on December 8, 2019, for Steam Early Access and Xbox One.

Don’t Die, Minerva! was provided by the developer via a Steam code.