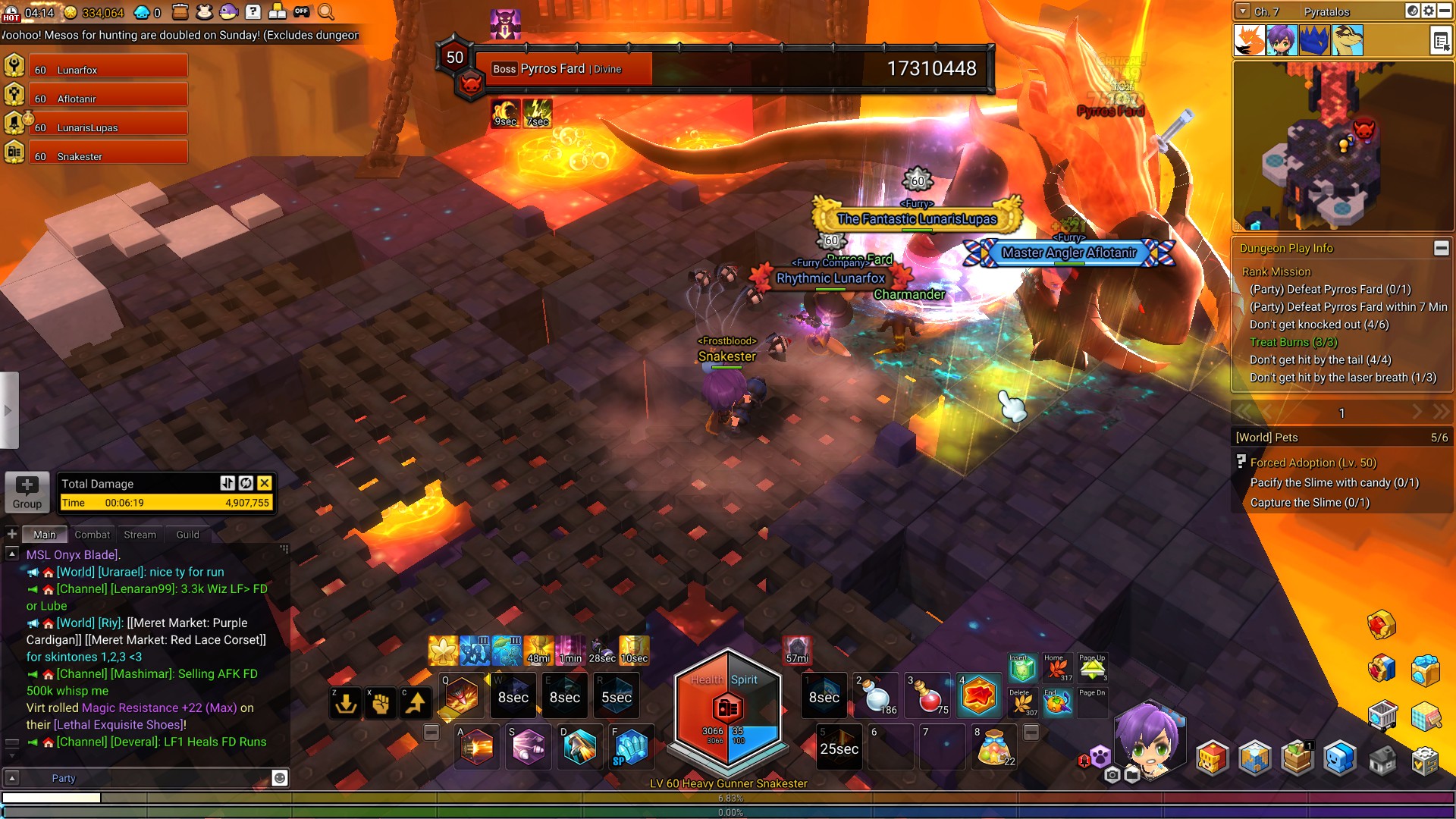 Nexon updated the MapleStory 2 community earlier today after hearing feedback to the MSL Onyx change previously announced. The update is the Epic Weapon passive buffs will now trigger on every Chaos Raid. Lead designer, “nemi” had some thoughts about the change,

“Players must have assumed the Chaos Raid structure would be similar to the Hard Adventure Dungeon structure, and we believe the above change is the best for everyone. If we do not change the current design, players would need to farm all three different types of weapons from Hard Adventure Dungeons, when we would like players to start enjoying Chaos Raids. Also, we see the possibility of parties only accepting players with specific weapons for each raid, which is not something the team intended to do.”

Therefore, you no longer need one specific Epic Weapon to run each Chaos Raid. This no longer encourages players to grind one of every Epic Weapon in order to excel in the Chaos Raids. Some interesting points brought up by Nemi further on is about how players may only accept people with certain weapons for the raids. This type of problem already comes into play with people being kicked from dungeons based on their gear score or attack.

Continuing on concerns with the change on each buff now activating in every Chaos Raid, Nemi mentions how they may not be balanced for each one. This gives the Nexon team at least a month to work toward balancing Ludibrium, but only a week to balance for Shadow Altar and Moonlight, unfortunately.

“There can be unforeseen issues coming from three weapons having slightly different triggers within the dungeon,” Nemi continued on, “and the team is thoroughly testing the system to ensure all three weapons have a similar level of advantage when they are used in the Chaos Raids.”

The blog post is shown below in detail prior to Nemi’s response:

“First of all, thank you very much for taking time to read our blog and share your thoughts. Both the team here at Nexon America and the MapleStory 2 studio care about how players enjoy the game, and always try to review all the feedback and understand the core issues to provide the best solutions for any of the topics we hear from the community. Sometimes the solutions might not be the ones you were thinking of, but please understand that we also have many different things to consider when making decisions and rolling out changes.

After we revealed the structure of the Chaos Raids, by reading everyone’s feedback, we learned there was one oversight designing the content.

The current system design of Hard Adventure Dungeons assumes the Chaos Raids will have the same level of difficulty and drop the same gear as a reward.

Initially, we thought the removal of Lubelisk (as we teased during the MapleStory 2 Premiere event) was the only issue and, as a result, we announced a change to the condition to trigger the “Dungeon Hunter” buff for MSL weapons. But after thorough discussion, we came to the conclusion this is not the only issue with the MSL weapons.”

Part of the MapleStory 2 community is frustrated with the recent MSL Onyx change, making Murpagoth not the go-to weapon for Chaos Raids.

In the latest producer blog State of the Week from Nexon, they announced the MSL Onyx weapons will no longer buff Chaotic Lubelisk. Instead, those weapons are focused toward the third Chaos Raid, Ludibrium Clock Tower. The Dragon Hunter passive buff on MSL Onyx weapons is defined below: 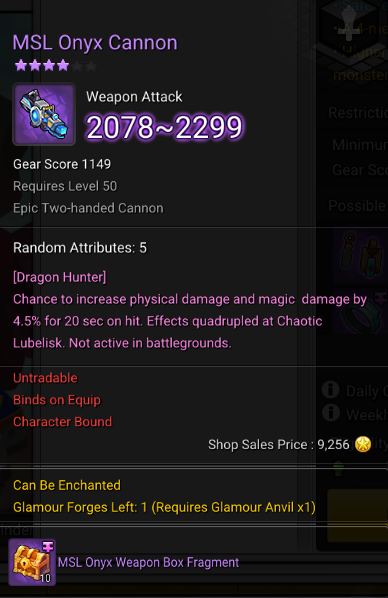 Players originally grinded the Murpagoth weapons from the Hard Dungeons “The Fire Dragon” and “Labyrinthine Halls” since they were the first ones released. Therefore, there was no other option and it made sense to grind the only Hard Dungeons available. Later on, the other four Hard Dungeons followed: Lubelisk, Temple of Immortals, Rune Temple, and BeyondLink Tris.

Due to the release of MapleStory 2 having only just happened three weeks ago, Nexon has been running double loot for Normal Dungeons. As of this blog, double loot will apply to Hard Dungeons for a week as well. This at least makes it easier to get epic gear for those planning to now farm MSL Onyx.

For hardcore players grinding since the release of hard dungeons, why would you switch to a different weapon when you’re already into enchanting the Murpagoth ones. It didn’t really add up since later enchantments past level 10 require duplicates of your weapon. Therefore, it only made sense to continue grinding Fire Dragon and Labyrinthine for the duplicates you need.

Players assumed Chaos Raids would function the same way Hard Dungeons do in terms of gear looted. The producer blog yesterday revealed only the third Chaos Raid, Ludibrium Clock Tower will drop Legendary weapons. This Chaos Raid releases on November 30, as opposed to the other two releasing on November 8.

“It was assumed that the all the raids dropped Legendary weapons instead of just the final one, and yes murpa was released before so more people did it,” said by user Moremackles in the MapleStory 2 Discord.

Previously players would have been fine grinding the Murpagoth weapon to eventually replace with a Legendary Weapon from the Chaos Raids coming in November. Similar to jumping from Normal Dungeons to Hard Dungeons, players got the best weapon they could and replaced it with an Epic from one of the many hard dungeons. In most cases, starting with The Fire Dragon Hard Dungeon.

Now, however, some people in the community are frustrated by the recent update as it made the MSL Onyx weapon the superior one going forward. The reason the MSL Onyx weapon is the shall we say, meta weapon, is mentioned at the beginning of this article. The passive buff on it is now quadrupled for Ludibrium Clock Tower, where it will be needed to maximize damage. 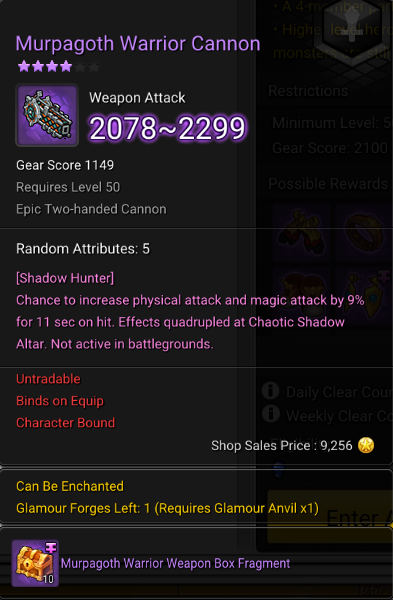 Chance to increase physical attack and magic attack by 9% for 11 sec on hit. Effects quadrupled at Chaotic Shadow Altar.

One can assume a high enchanted Murpagoth weapon is still a high enchanted Epic weapon. In my personal opinion, I’d assume any high enchant Epic weapon will get you through the Chaos Raids. However, if you want to reach your highest potential, you would grind three sets, one for each Epic currently available in the Hard Dungeons.

For those wondering about the Ancient Rune weapon passive buff, the Pirate Hunter passive is defined below:

Chance to increase attack speed by 8% for 16 sec on hit. Effects quadrupled at Chaotic Moonlight Fortress.

For some players, it would be crazy to grind three Epic weapons up, one for each Chaos Raid coming. So the new mindset is to grind MSL Onyx before Ludibrium Clock Tower releases, so you have the major one enchanted. My personal opinion and 100 percent my own thoughts here for a second:

People aren’t going to want to go into Ludibirum Clock Tower without Legendary gear, which is at least hinted at by Lee in the blog. So it will still be important to grind Shadow Altar and Moonlight Fortress to get at least basic Legendary gear. Between raising your gear score and overall stats, even if it doesn’t have the perfect attributes.

However, it makes the most sense to spend your time getting a high enchant MSL Onyx weapon now. Players have nothing limiting them aside from the knowledge of the Hard Dungeons. So grinding MSL Onyx up instead of Murpagoth will benefit you more in the long term. Assuming the quadrupled buff isn’t necessary to complete Chaos Raids and you can get by, people will “get by” in the first two Chaos Raids.

When it comes to the serious grind of Ludibrium, players are going to want the better weapon of the three.

The main reason the MSL Onyx change can be infuriating is players lose both time and in-game currency (meso). Whether it’s the time invested in running dungeons under a dungeon cap or the money farmed for buying Onyx Crystals. Enchanting weapons can be both a time consuming and expensive process. The players this change affects can either decide to continue upgrading their Murpagoth gear or switch to focusing MSL Onyx.

Let us know in the comments below what you think about the MSL Onyx change and how it either does or doesn’t affect you!