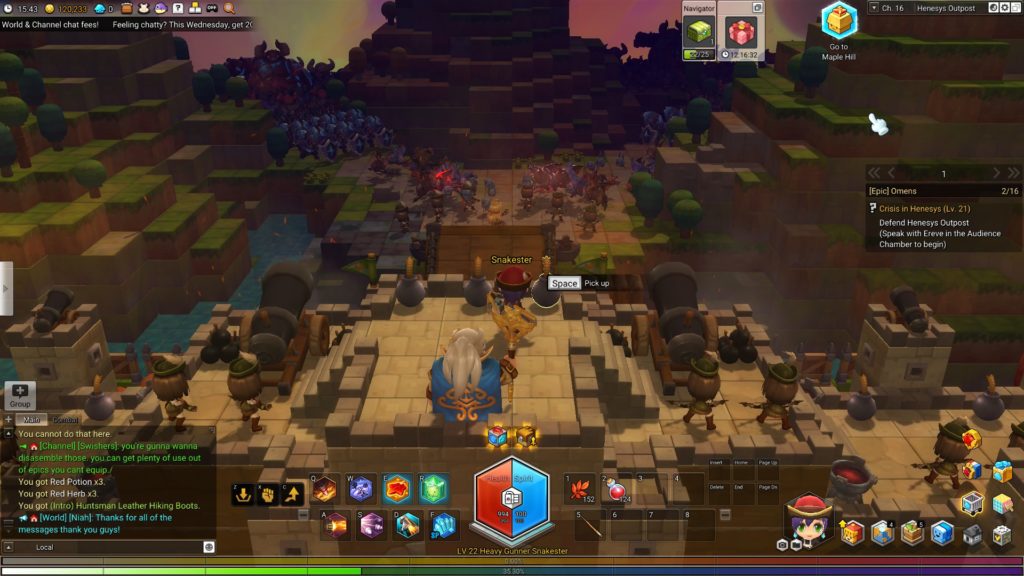 Jumping from MMORPG to MMORPG seems to be my go to strategy with MapleStory 2 being the latest one. Originally I was messing around with The Elder Scrolls Online, grinding to max level and getting my gear up for the end game. Now I’m seeing how MapleStory 2 is after being out for week, having released on October 10.

Among the classes you can play, I decided on the Heavy Gunner mainly because I thought they sounded like a cool class to play.  The Heavy Gunner uses a cannon and focuses on physical damage through dexterity. I’ve only gotten to level 24 as of writing this article with a gear score of 637. Since reading a review and watching a few live streams on Twitch, I learned it’s not too difficult to level.

That’s why my current goal is to hit max level and continue raising my gear score. When I was playing through The Elder Scrolls Online, my mindset was get to the end game content as fast as possible. In a way, trying to get through the grind as fast as possible and get to the interesting content. However, so far my current grind has been working through the main quests to level. I’ve heard there are better ways to level, but the questline isn’t a bad way. 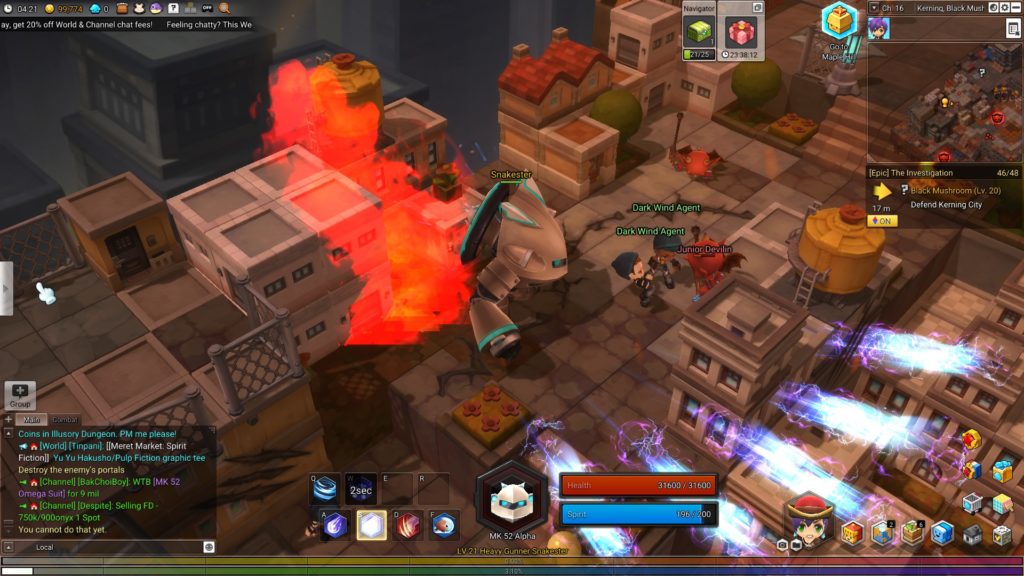 In passing during a stream I heard auto-fishing and auto-performing, alongside running world bosses is a solid way to level. I’d love to hear more from people on how well these activities work. Last night I ran through a few of the lessons and learned how fishing works. In the process, they gave me a 30 minutes worth of auto-fishing which of course I used immediately.

The benefit of auto-fishing, despite it costing real money is you can be away from your computer while gathering fish and experience. Plus, auto-fishing doesn’t play the mini-game that occasionally pops up during fishing. It also immediately resets back to fishing after either catching a fish or failing. This maximizes how productive your time is, especially for people who might run it when they’re busy doing in their life.

I played a little bit of the original MapleStory when I was younger, a long time ago. However, jumping into MapleStory 2, I’m definitely in a unknown place discovering everything for the first time. My experience so far is running quests, a couple dungeons, barely grinding mobs, and a cluttered UI screen. I’d like to learn more about the game past playing like I’m on auto-pilot. And I think the first step in changing that is to join a guild. 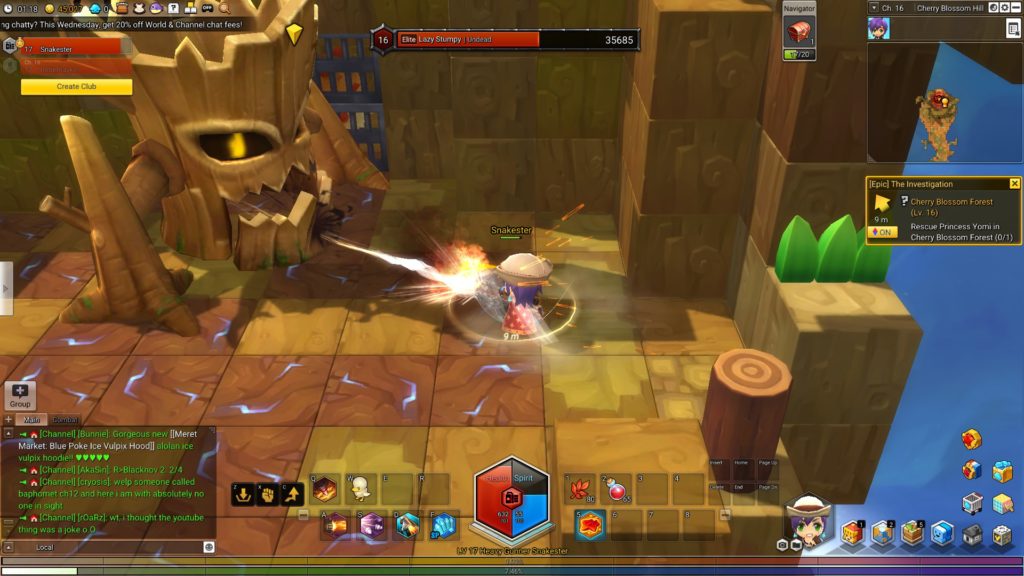 The leveling is quite fast compared to when I first played MapleStory early in its development. Although, the combat still feels slow at times. As someone who has only played the Heavy Gunner, I can’t say how my abilities and combat compares to other classes. It’s possible it’s too early on and my abilities will eventually pick up. But currently, they often consist of standing still, holding one ability down, and then jumping away from a mob. This frequently repeats, sometimes with a little bit of a change, however not much.

It’s possible this is just the way of the game so far since it’s still early both in my character’s development and to keep the game easy for players learning. Especially as the first two dungeons I ran had bosses without too many mechanics to them. Often leading to battles where I stand still as a punching bag without any real difficulty. I will say, I do often get a kick out of using the environment to fight enemies. Earlier today, I picked up a cage of chickens and unleashed them on a slime. 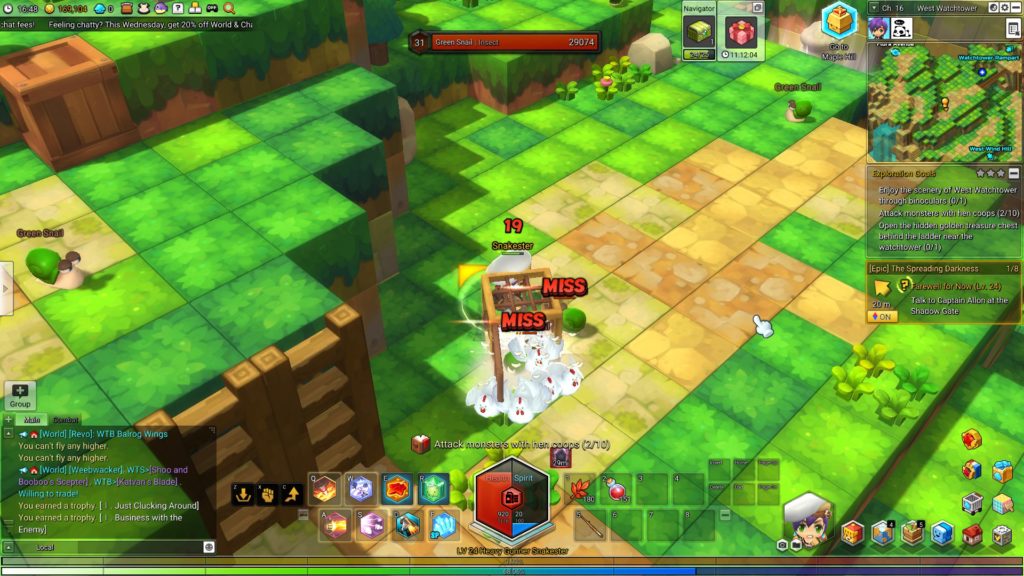 Anyway, I just wanted to get some words down on paper about my experience with MapleStory 2 thus far. I’m enjoying it, it’s definitely a solid MMORPG for me to play with Netflix running on the side. It doesn’t take too much focus, but it’s that nice kind of grind that can be soothing at times. Where you’re able to relax and listen to music, watch a stream, or video, etc. For those looking to fully engross themselves into the game, that’s also entirely possible as you follow the story.

If there’s any content regarding MapleStory 2 or tips you have for me, feel free to comment below. I’d love to hear more from people currently playing and would love to add content to this universe!