Learn everything there is to know about fishing in MapleStory 2! Fishing is one of the many activities you can do to pass time in-game without always having to grind mobs.

In the video above, we go through a quick rundown of what you should know about fishing and how it can benefit you. If you’re looking to make money or get trophies, you can find out both from in the video and further explained below in this article.

How Do I Get a Fishing Pole? 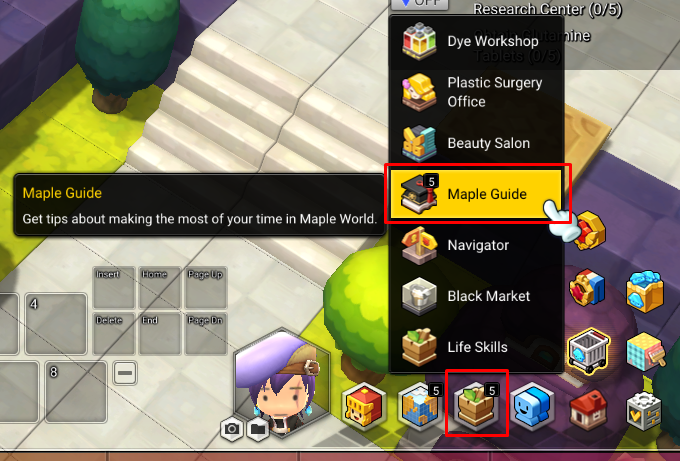 During this lesson in the Maple Guide, you’ll get a Polished Wooden Fishing Pole where the game then teaches you how to fish. Upon finishing the lesson, you’ll also receive 30 minutes of Auto-Fishing. How to access the lesson is shown in the above picture.

As shown in the lesson on fishing, once you have a pole, you can go fish at a water block. In some zones, you will come across lava, oil, and venom blocks which can also be used to fish. As long as your fishing rank is the same as the block you fish at.

When you arrive at your water block, you simply need to double click your pole in your inventory, or use it as a hotkey on your hotkey bar. When doing so, it will pull out your fishing rod and put a fishing bob in the water. Using the keyboard arrow keys, you can choose what tile near you to fish in. 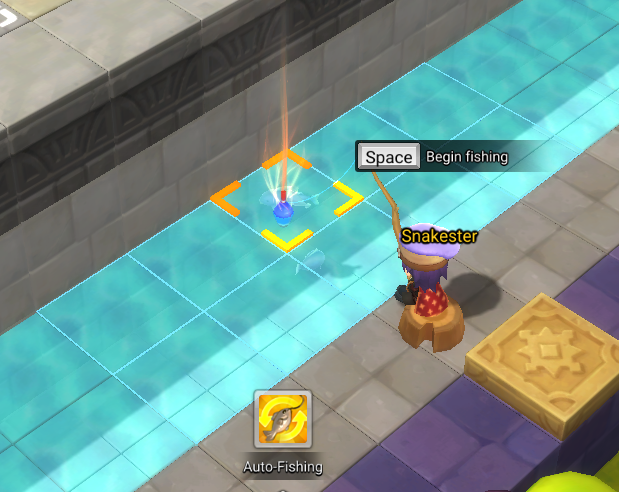 Once you decide where you would like to fish, you simply press Space to begin fishing. As shown in the picture above, it should say “Space Begin fishing” or whatever key you have to activate fishing with.

Now the fun begins! A bar will appear on the screen and fill as you wait for a fish to catch your bait. As you wait, a few different things can happen.

If the third option happens, this means you get to play a little fishing mini-game shown in the picture below. It’s also shown in the video where we show how to win it. If a fish grabs your bait but isn’t caught yet, you’ll need to tap space to keep your fishing bob in the yellow zone on the vertical bar below. Each time you press space, it will raise a little bit. You can also hold the spacebar to continuously raise it. 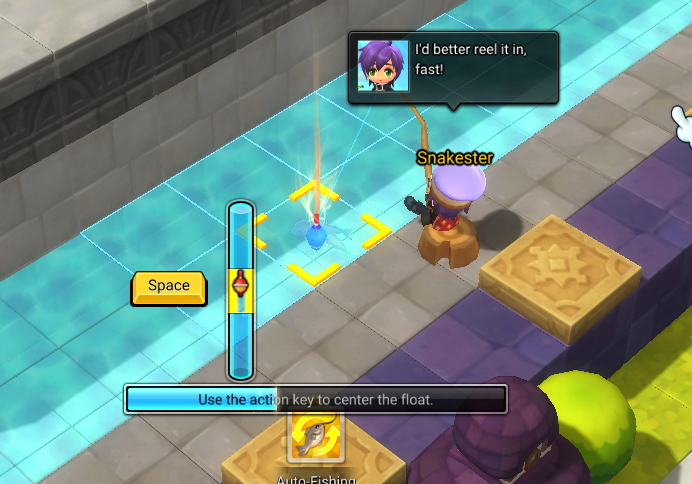 How Many Fishing Ranks Are There?

As you progress in MapleStory 2 among the angler fishing ranks, you’ll start out as a beginner, and eventually become a Master Angler. The ranks go as follows:

How to Get Mastery Points in MapleStory 2

Now how exactly do you rank up and become a Master Angler to get all those fancy trophies? There are only a couple of ways to rank up your mastery in fishing, and as you would expect, they include fishing! Each new fish you catch for the first time awards mastery points for catching it. The rarity of the fish caught gives different mastery points:

The other way is simply to go fishing and catch fish. The same way as your character level, the higher you get, the longer it takes. The higher mastery fisherman you become, the longer it takes. You’ll need to catch fish at your fishing rank in order to gain mastery points. Each zone with a source of water, lava, oil, and/or venom has a mastery rank.

How Do I Know Where to Fish?

Instead of wandering aimlessly in MapleStory 2 for water with your rank, Nexon makes it easy to find the perfect spot! When you go to the World Map, at the top there are several filters that will emphasize certain areas. If you click “Recommended Fishing Spots”, arrows will appear where to fish at your rank. 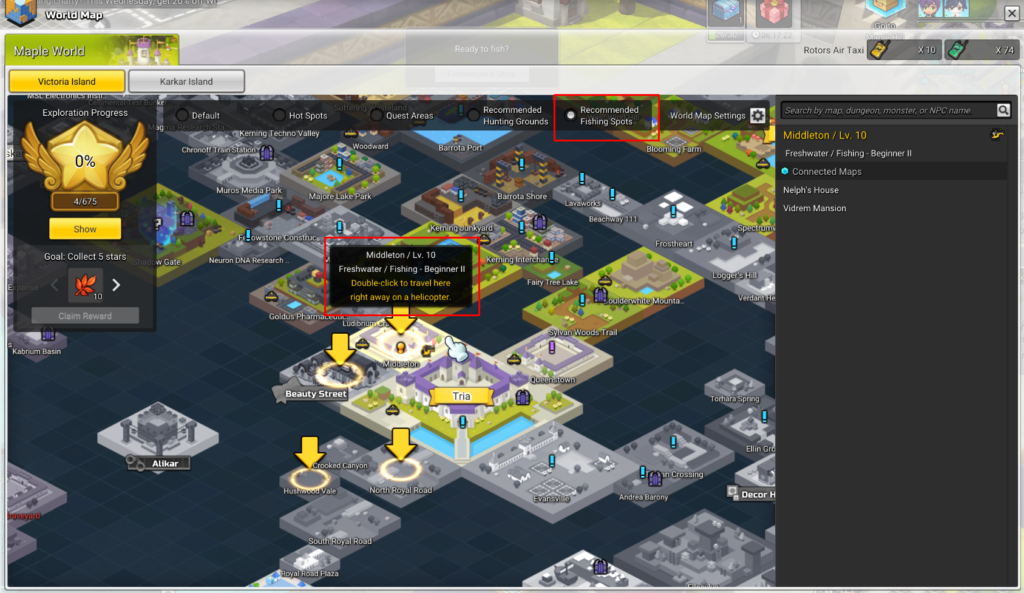 The picture above showcases what it will look like after you click “Recommended Fishing Spots”. It chooses zones that are at your angler rank, whether it be Beginner or Master. The zones your game picks will get your mastery points for raising your fishing rank.

How Do I Make Money Fishing?

This is where people are most likely confused with fishing in MapleStory 2. If you want to make money through fishing, you need to use a Shiny Golden Lure. In the Fisherman’s Shop, accessible by taking out your fishing pole, there are four types of Shiny Golden Lures. Each rank has two types, one that provides a buff for an hour and the other for three hours. 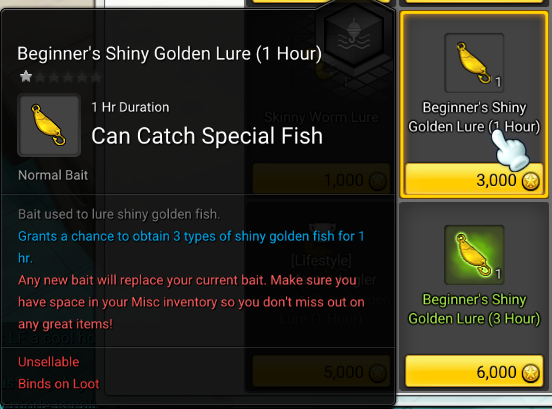 A Shiny Golden Lure as shown in the picture above, grants a chance to obtain 3 types of shiny golden fish. Shiny golden fish are sold to NPCs for a sizable amount of meso. The reason people get confused around making money fishing, is you don’t keep the fish you catch. 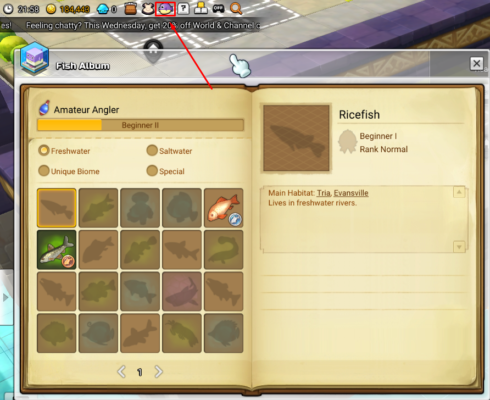 Auto-fishing is a way to fish in MapleStory 2 when you’re not at your computer. By spending the premium currency of Merets, players don’t need to be at their computer to fish.

When auto-fishing is enabled, characters fish without you being there. This is a passive way to gain experience, mastery points, and if you’re using a Shiny Golden Lure, potentially some meso.

Certain fish in the Fish Album don’t have a location listed and it’s up to the player to find where them. Fortunately, some players have already figured that out. Courtesy of Altimos on the MapleStory 2 forum:

If you have any tips or tricks for other MapleStory 2 fishermen, drop it in the comments below. Everyone’s still learning the best way to become a Master Angler!