Knowing how to redeploy in Foxhole is useful in case you run out of spawns or want to check a different area. Especially if you notice people in chat begging for help in their region. This is a good way to redeploy and send help elsewhere that may need it more. Continue reading our Foxhole guide below for how it all works.

How to Redeploy in Foxhole

If you’ve made it to our guide, you probably already know how deploying works. When you’re at the home island, all you need to do is visit one of two spots to spawn into the main region. So I won’t dive too deeply into that.

For those of you that are already deployed and have run out of soldier supplies to spawn, you still have a few choices. You can spawn a forward base like an Encampment if you’ve set your spawn there. This is a good way to get closer to the fight, but you’re more likely to lose that first. However, you can return to the home spawn that you first deployed on.

If you’ve run out of tickets for both spawns, you may have an option on death to respawn at a nearby base. There’s a decent chance it will spawn you far away from where you were. So you may want to completely redeploy instead. This depends on what you and your squad may be doing.

When you’re completely out of options and want to deploy elsewhere, you have two options. You can either press escape and click the “Return Home” button to return to the first island. This area will let you redeploy to a new region the same way you originally did. If you’re currently dead and can’t redeploy, you can click a button that says, “Abandon War”. This also leads back to the home island/base.

Where to Deploy in Foxhole 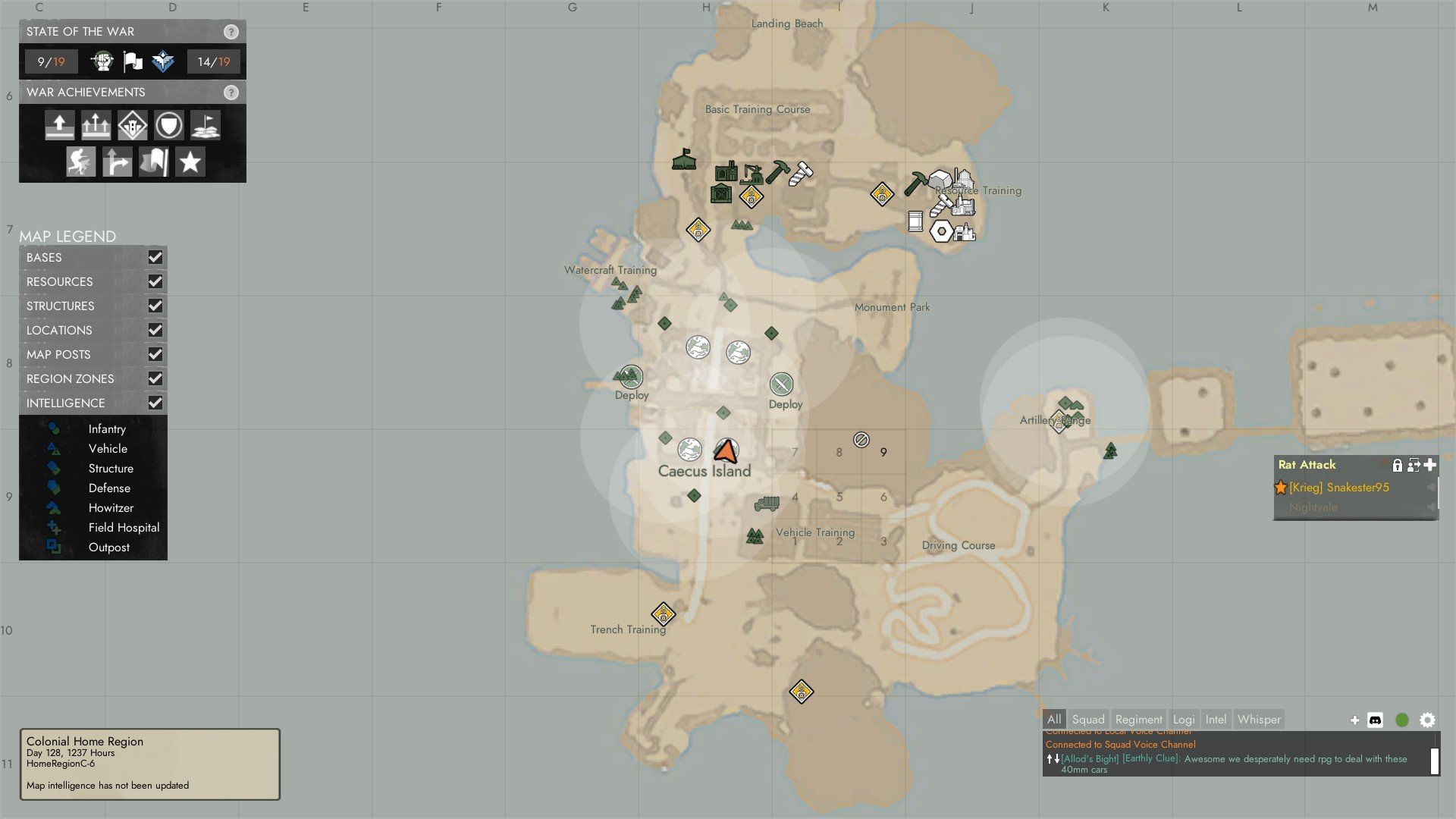 Visit one of the four map stations to get some intel for the main island.

If you’re not sure where to deploy or redeploy, here are some quick tips. Regardless of whether you’re new or not, it can be tough to know where the action is. Unless you’re looking to spawn near the backline for logistics instead.

There are two main methods for deciding where to spawn and a third one that isn’t too bad either. First, if you’re still at the home island, there are four tents you can check to see a map of the main island. When zooming in, you’ll see more information than you would at the deploy screen. While this won’t show active locations like a radio, it still helps give you an idea.

If you’re looking for action, always look at regions along the front line. This is where the majority of Colonials and Wardens will bump heads. Aside from small recon groups running behind enemy lines.

The second main method I recommend is asking in the world chat. The second you ask in chat where the action is or where needs help, you’ll get a few responses immediately. This is because there’s always a place that needs help or is steamrolling through. And nobody will say no to extra bodies. 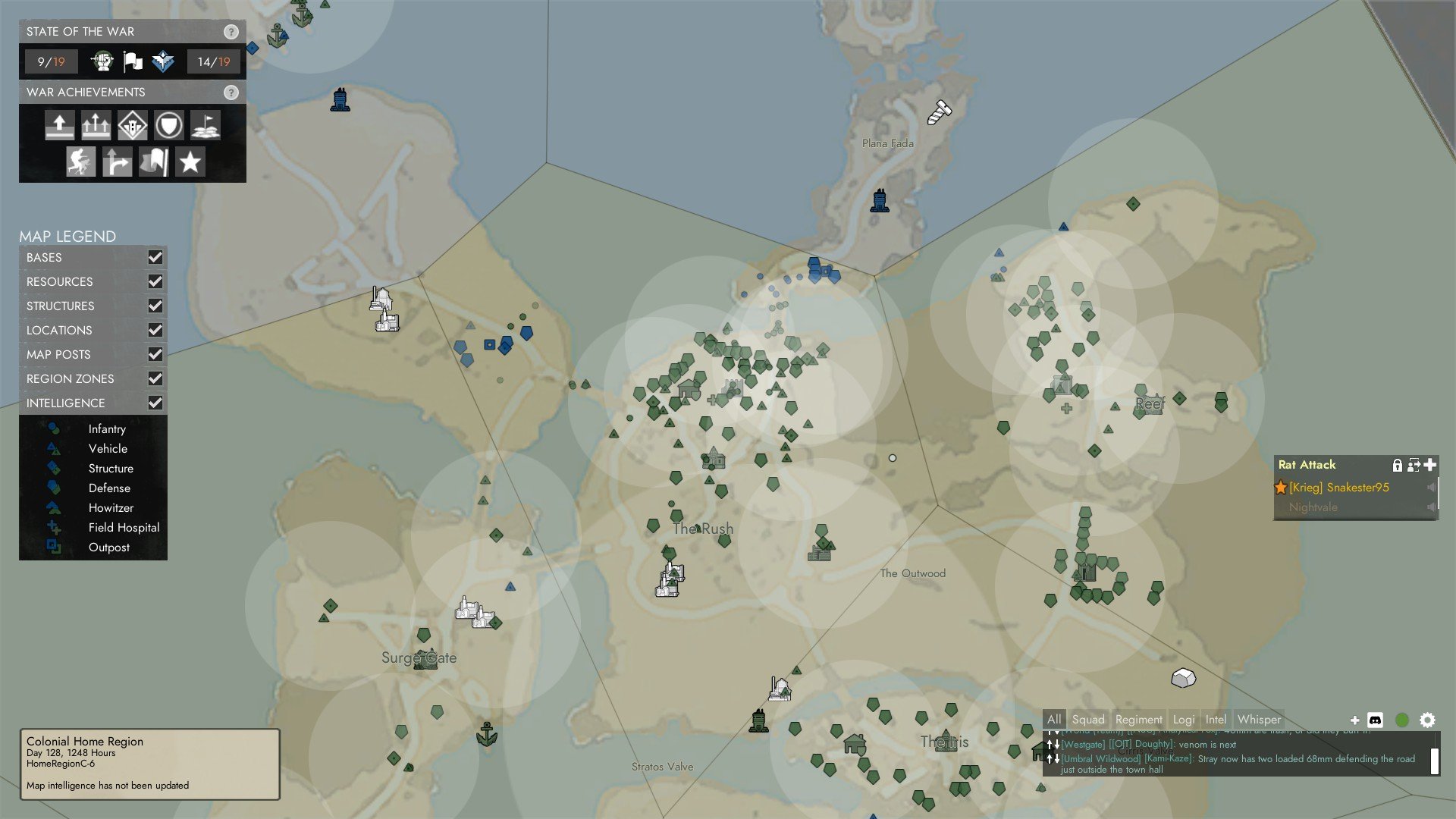 If you hop into the main island and grab a radio, you can get live updates of where everyone is.

The final method is my favorite but it requires a little more work. I like to deploy into a region, grab a radio, and search the map for the most enemies. For those that don’t know, equipping a Radio provides real-time updates of enemies within lookout towers. This is a useful way to see where the most action is happening.

That’s all there is to this Foxhole guide on how to redeploy. If you have any other questions for me, feel free to ask in the comments below. We have another useful guide on How to Use Bayonets as well.