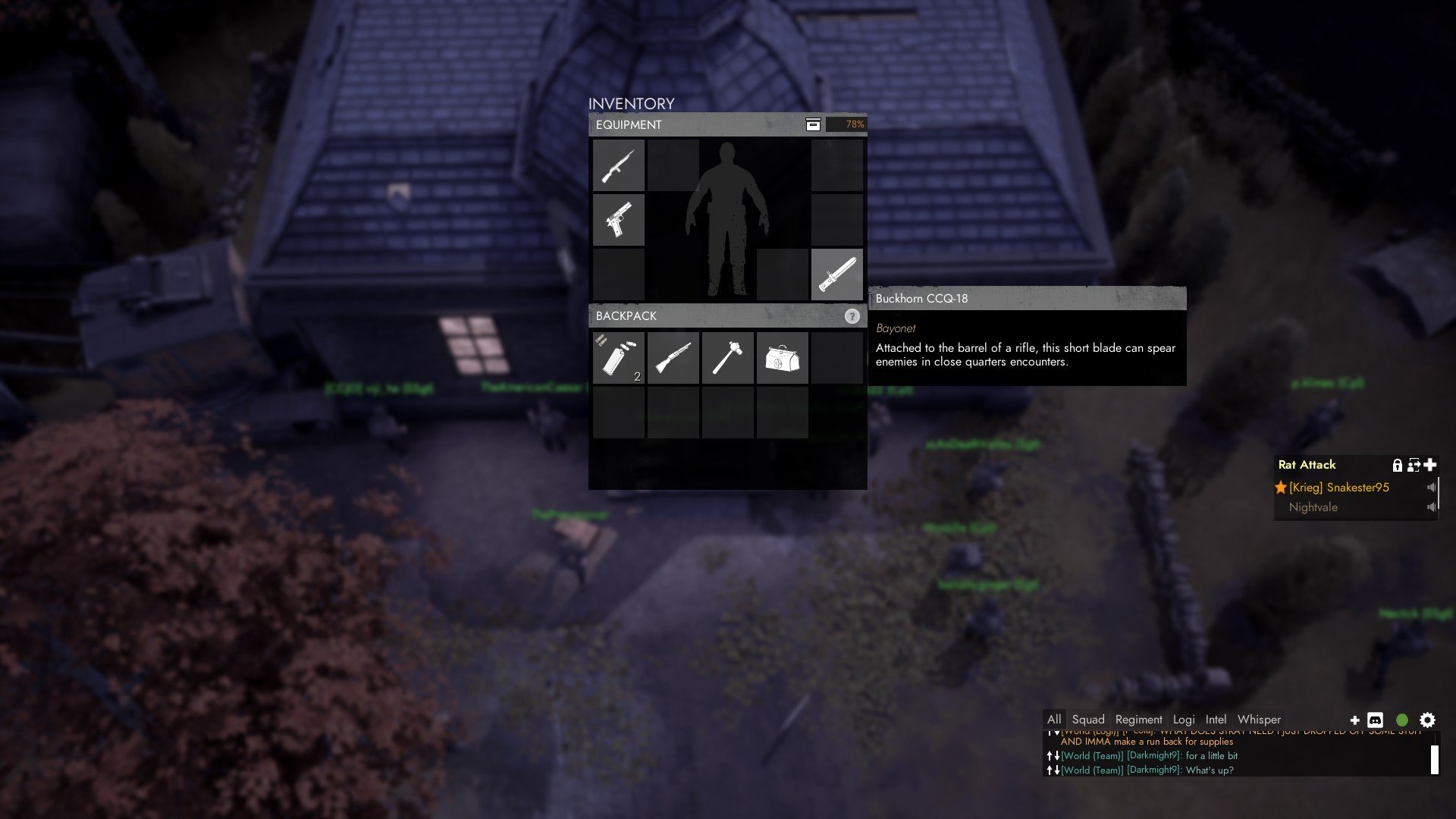 A significant portion of the game Foxhole often takes place in trenches and that’s why it’s important to know how to use a bayonet. This simple tool is great for taking out large groups of enemies quickly. Especially because you don’t really need to aim it. Continue reading our guide below for how to equip and use bayonets.

How to Use Bayonets in Foxhole

Assuming the current war you’re fighting in has already reached the technology for Bayonets, you can start equipping them. First, you’ll need to loot one or get it from a base. If you don’t have any available, you can try requesting them from people running logistics routes. The Colonial version is called a Buckhorn CCQ-18.

Once you have a Bayonet in your inventory, you’ll need to click it to equip it. This will move it from your Backpack to your equipment. As long as you’re using a weapon compatible with it such as a rifle, you can move onto the next step.

All you need to do now is pull out your rifle and press the “F” button by default. This will change the weapon name at the top-left corner to “Bayonet” if you properly attached it. Now you can start using it by simply pressing left-click to stab. As long as you don’t aim with right-click, you’ll use this instead.

This is a popular weapon for clearing trenches since you can hop in and start fighting. You don’t need to worry about stability either. Because in most cases, you’re probably dropping into a trench after sprinting over to it. And in that situation, you’ll have extremely poor stability for aiming well. That’s why it’s easier to throw a few quick stabs and wipe people out.

You can definitely take a group of enemies by surprise doing this. The other reason it’s tough to combat another player using a Bayonet is because they only need to hit you once. The only way you’re going to survive is if they’re far enough away, you get a shot, and that slows them.

Another fun way to use this weapon is to grenade a trench and then move up to it. Especially if you have gas grenades because these can clear an area quickly. Try to take advantage of that window to run up while enemies are panicking. Unfortunately, some people may not even notice the grenade and still watch for you. So you have to be careful.

One of the more frustrating areas in Foxhole is frozen regions, but you can use Bayonets efficiently there. In order to prevent people from freezing to death, players need to take advantage of trenches buildings, and bonfires. This leads to people often building too many trenches and making themselves vulnerable.

Look for opportunities to sneak into enemy bases and catch them by surprise. At the end of the day, catching people by surprise if the most enjoyable part of using a Bayonet.

If you have any other Foxhole questions for me, feel free to comment below the article. I’ll try to get back to you if I can help out. Otherwise, good luck and have fun making plays.