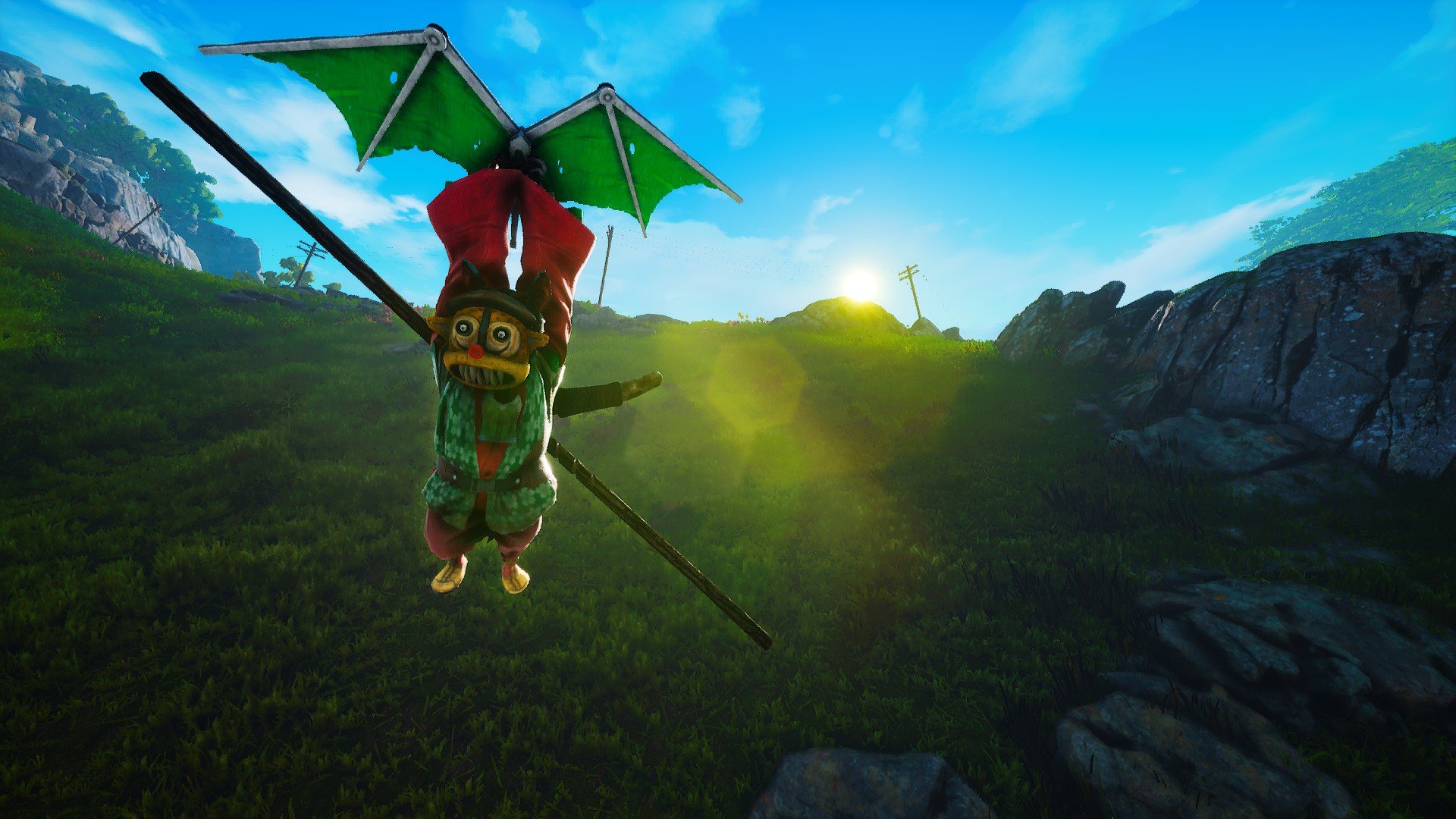 Biomutant is an open-world RPG filled with unique mounts that can help you get around. One of these includes the Airglider for flying and gliding around this world. Before you can unlock the Glider or the upgraded mount known as the Batnam-nam, you’ll need to do a few things. Continue reading our Biomutant guide below on how to fly.

How to Fly With the Glider 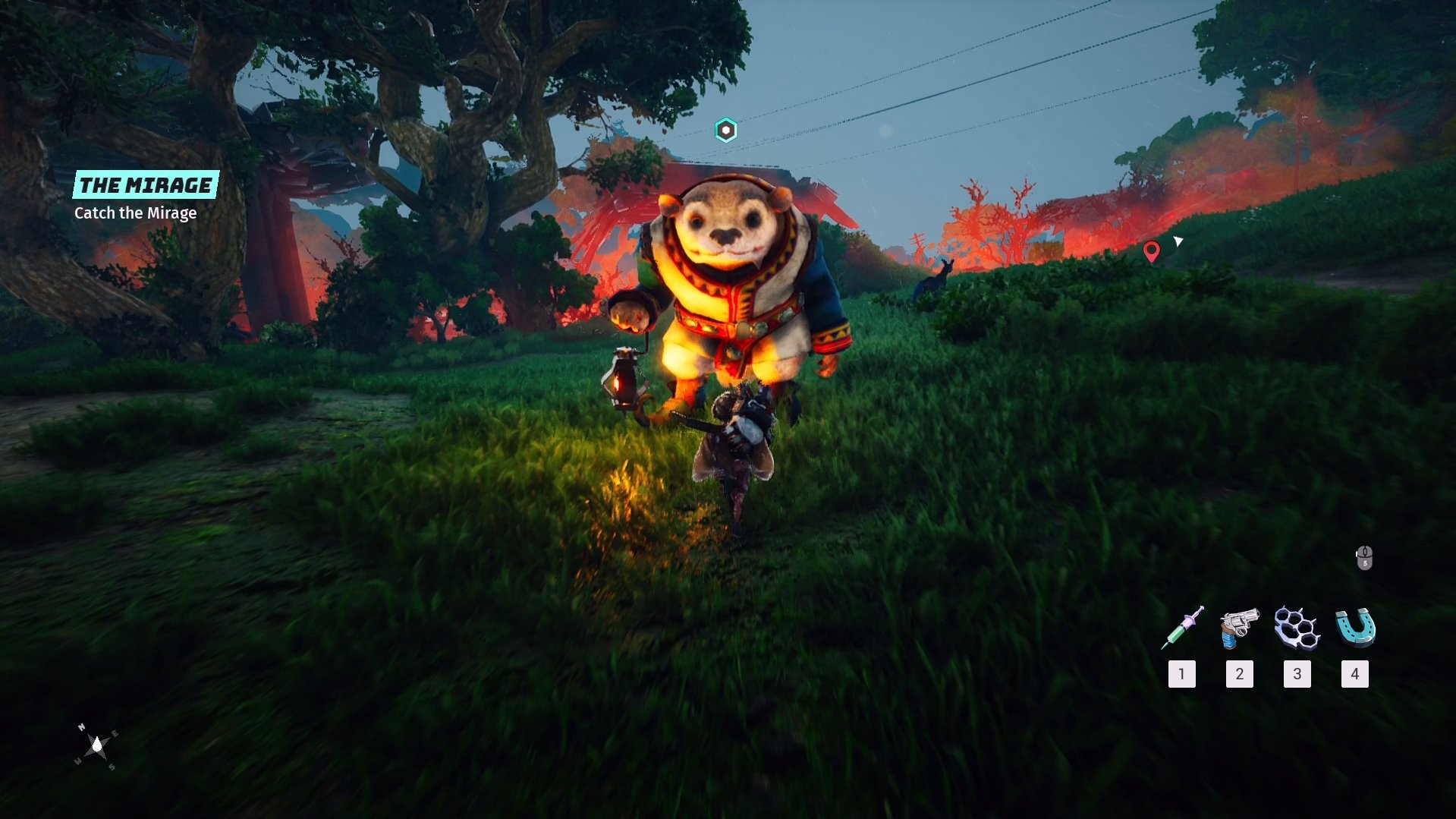 Before we get into how to fly using the Glider kite, you’ll want to learn how to acquire it first. This is one of the unique functions of your Automaton robot that follows you around. It has five unique mechanics to take advantage of with the first one unlocked by default, a flashlight. As you get further into Biomutant, you’ll come across certain side quests that let you unlock the others. Each one is listed below.

Whenever you come across a certain character, the camera will zoom in on them starting a side quest. Each one of these is known as “The Mirage” where you’ll revisit a memory and unlock a new Automaton mechanic. Fortunately, you can pick whichever upgrade you want regardless of the memory you’re completing. This character to keep an eye out for is in the screenshot above.

Once you interact with the bear character, you’ll need to fight someone in a past memory. Fair warning, you won’t have all your weapons and abilities for this fight. However, it doesn’t seem to matter whether or not you succeed. Even if you lose against the disciple, you’ll still complete the Mirage memory and get an Automaton upgrade.

After the battle finishes and you’ve returned to the present day, you can choose one of four upgrades. Each type is listed above, but the main one you want for this guide is the Airglider. This will unlock the Automaton’s wings so you can fly through the air. 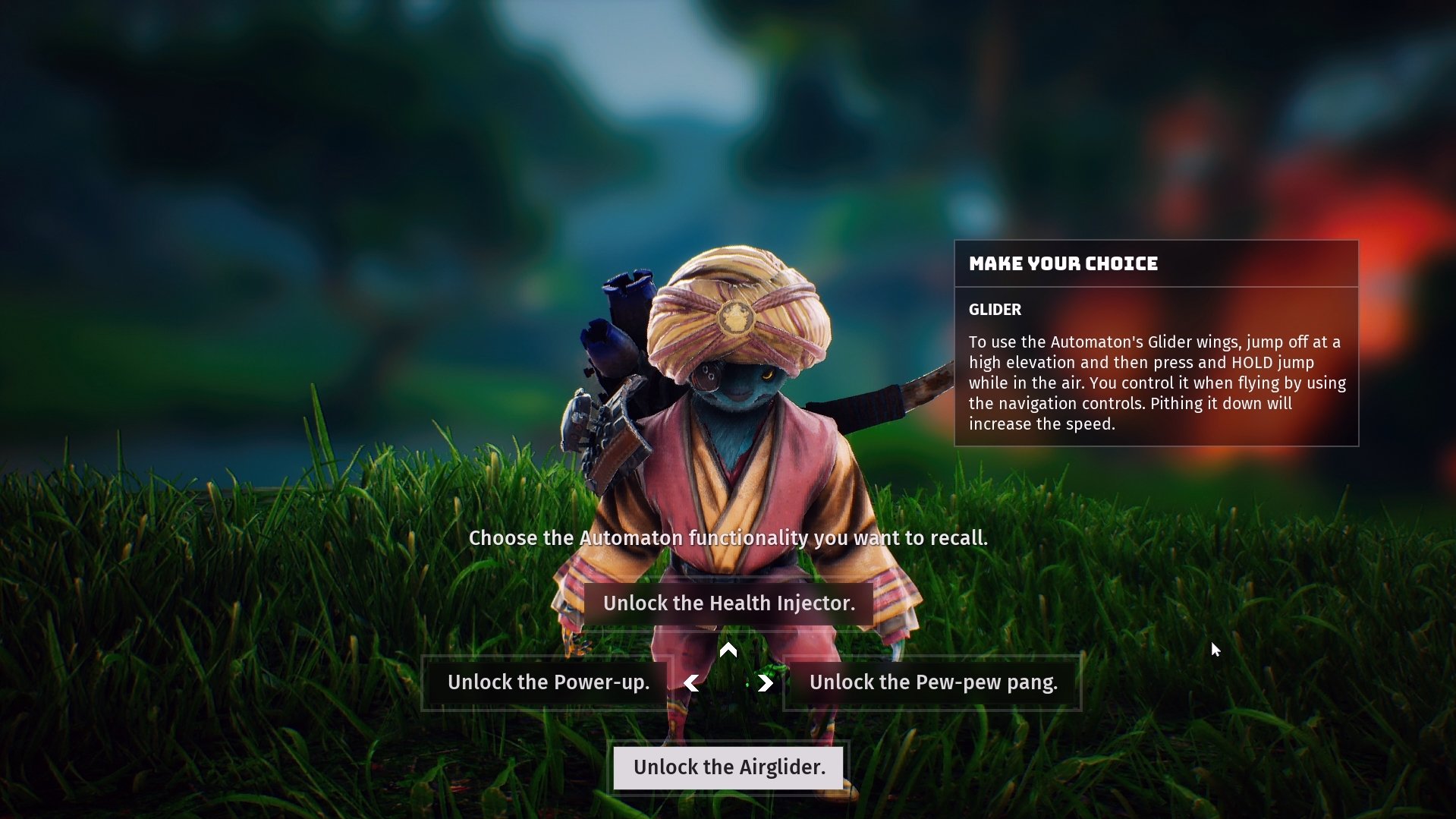 For those of you that already have the Airglider and aren’t sure how to use it, here’s a quick explainer. All you need to do is jump and then hold the jump button to use it. If you’re too low to the ground, you won’t be able to start gliding. But if you jump from a cliff or at least a small height off the ground, it should work. Just remember, this is a glider so you can’t completely fly.

With that said, the Airglider is still a better option than riding a mount off a cliff. If you’re not able to fast travel to where you’re going, you can glide toward it instead. Sometimes this will help with crossing a river that your character can’t swim through, for example. That’s why it’s a useful Automaton upgrade for certain scenarios.

How to Get the Batnam-nam 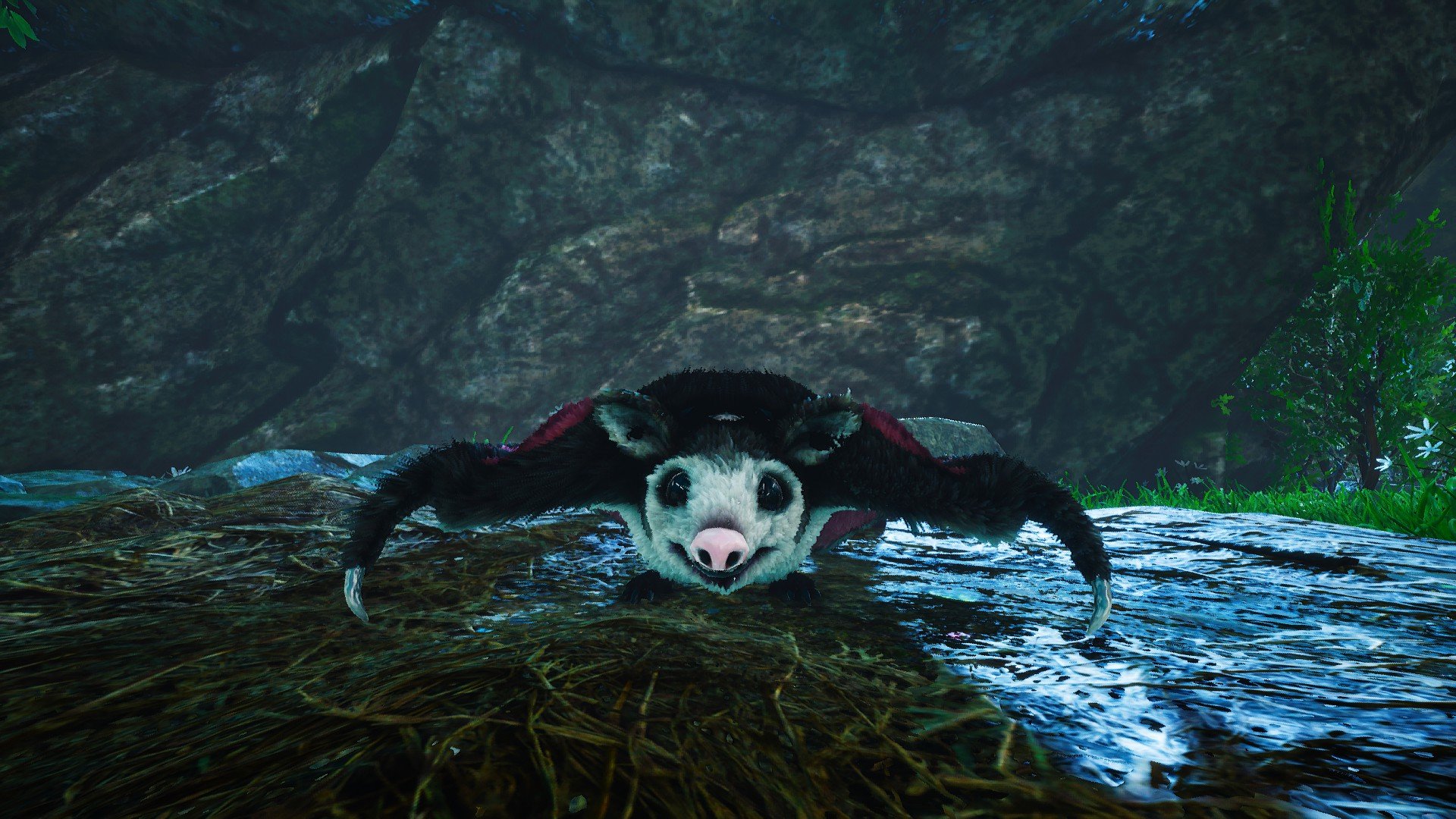 One of the many easy-to-miss mounts in Biomutant is the Batnam-nam. This is a bat creature that you can use in place of the Airglider to get a little farther in the air. However, instead of unlocking it via the Automaton, you’ll need to complete some side quests. But don’t worry, these aren’t too difficult and simply revolve around a bunch of climbing. 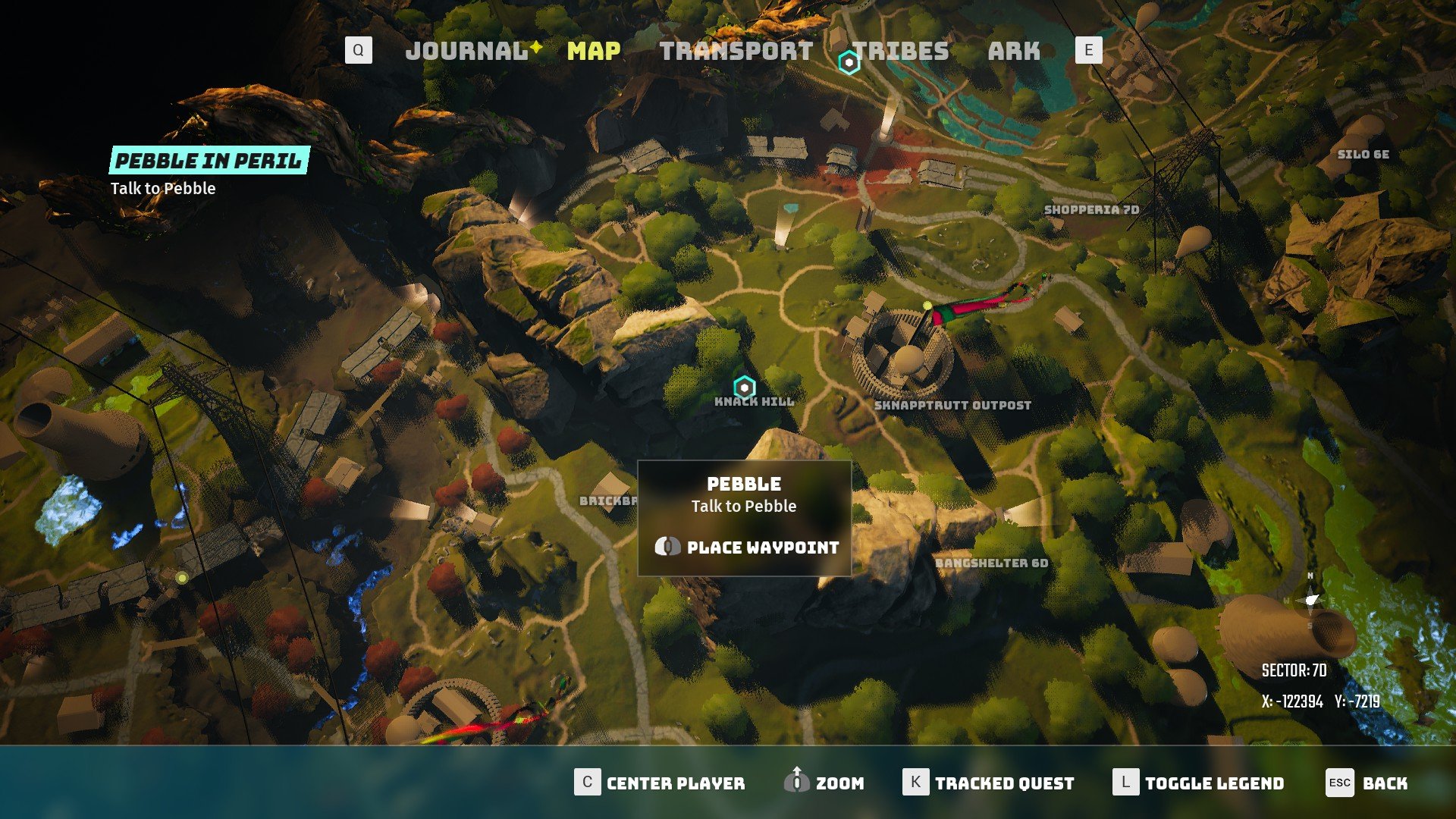 First, you’ll need to track down an NPC named Pebble at Knack Hill. You can see their location in the screenshot above. Knack Hill is also near the southwest side of the map, northeast of the Deadzone. Once you meet Pebble, you’ll need to complete four different side quests before unlocking the Batnam-nam mount. We’ve listed each one below.

The final side quest, Pebble’s Reward, has you climb a cliff next to Pebble and get the Batnam-nam. Unfortunately, you won’t be able to skip these missions and get the mount as the nest will be empty until you finish all four. Once you climb to the top of the mountain, the Batnam-nam will be there ready to interact with.

All you need to do is hop on and you can use it the same way as the Airglider. However, you’ll need to ride the Batnam-nam since it’s a mount, unlike the Airglider. This is the one minor difference between the two. If you have any trouble with the side quests from Pebble, feel free to ask in the comments for help.

That’s all there is to our Biomutant guide on how to fly. If you have any other questions, you can ask in the comments below. Otherwise, be sure to visit our guide hub for more useful tips and tricks. We’ve included a few guides below as well.