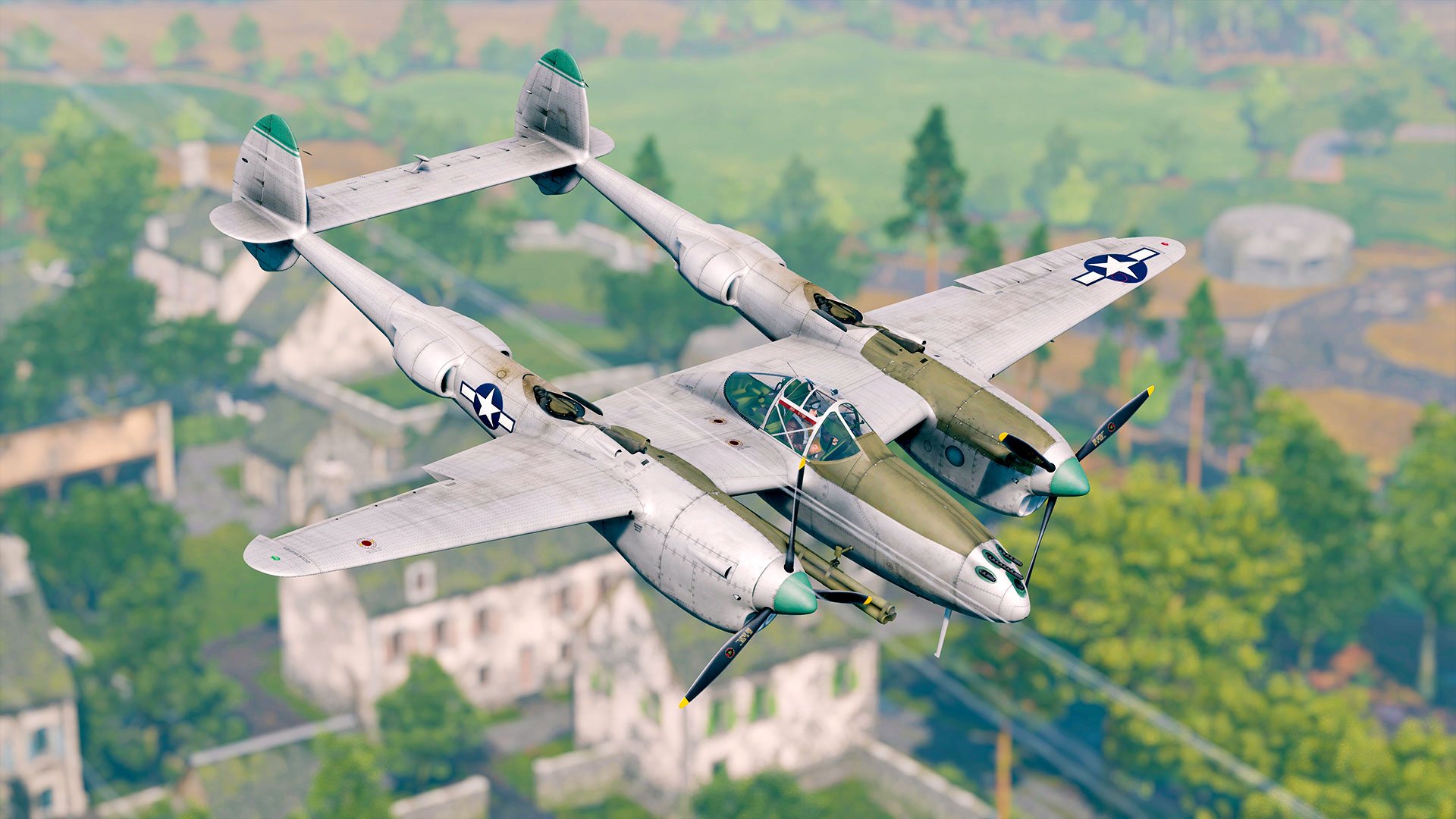 Learning how to fly planes in the free to play WW2 game Enlisted can be extremely difficult if you don’t know where to start. That’s why we’ve put together this flying guide to try and help you understand it a little bit better. The first section below is filled with general tips and tricks on how to control your plane. And the following sections mentioned in the table below dive deeper into dogfighting and bombing runs.

How to Fly Planes in Enlisted

The Basics of Flying 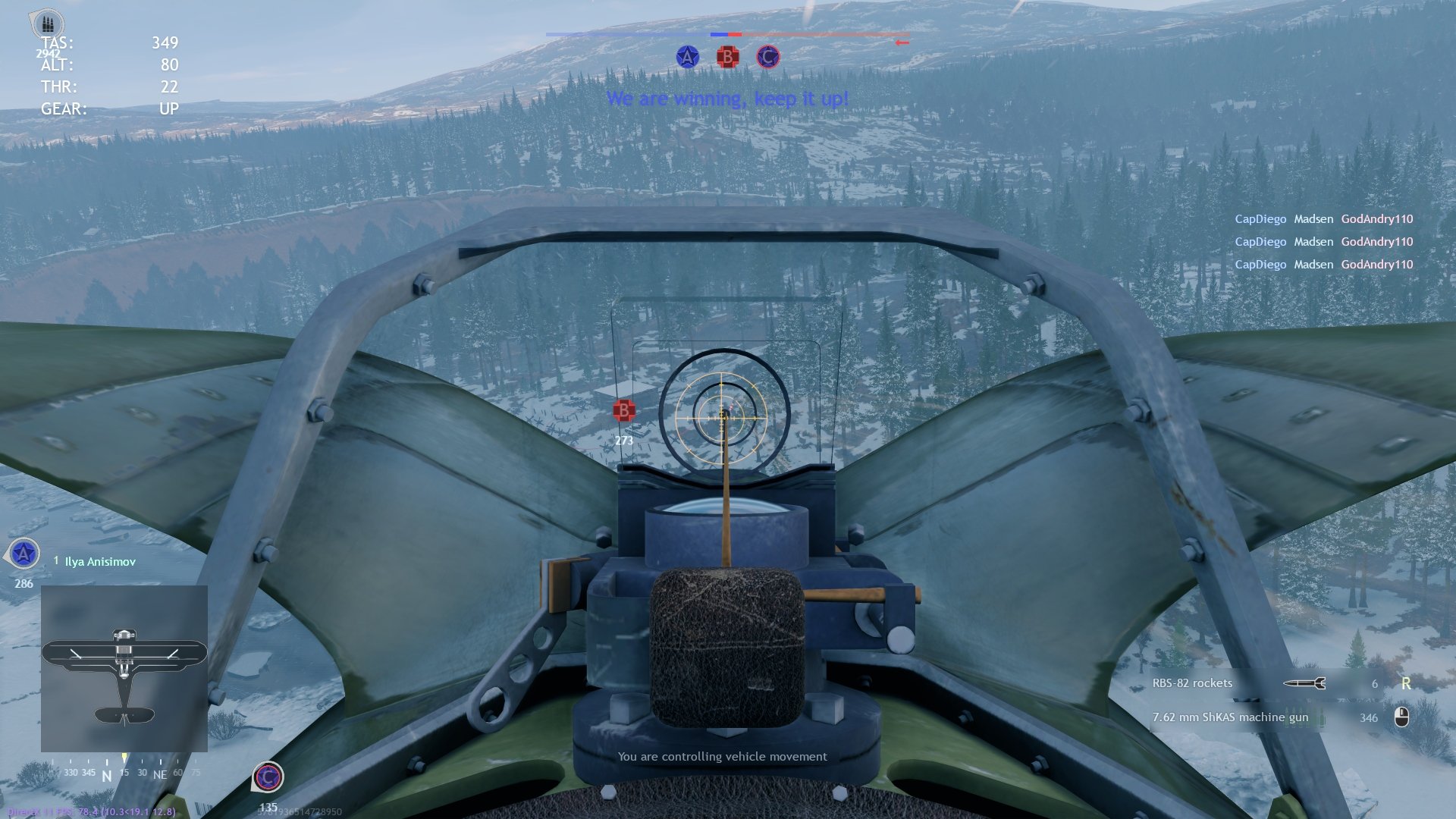 While your plane will only shoot straight, you still need to move the reticle in the direction you want to fly.

A quick disclaimer that I’m writing this guide as a PC player, even though the mechanics are still all the same. This is more-so important for noting specific buttons on how to fly. With that out of the way, the majority of flying in Enlisted revolves around using your mouse. While you can use W and S to ascend or descend, most of the time you’re better off moving your reticle in the direction you want to move. So if you want to go up, move it up, down, move it down, etc. This is the best way to get used to flying before doing anything fancy.

The trick to flying while using the reticle primarily is controlling your thrust speed. By default on PC, you can use the mouse wheel or ctrl and shift to adjust thrust speed. You’ll see the thrust number at the top left corner while flying, “THR”. By reducing your thrust, your speed will drop helping with turning and flying low to the ground. For a quick explanation on each acronym near the top left corner.

Now that the basics of how to fly are out of the way, flying efficiently is all about managing your speed and altitude. For example, you’ll want to have high thrust when building altitude, flying to resupply, and leaving the area especially. This helps with getting where you need to go quicker and being a more difficult target. However, when you’re flying down toward a group of enemies or a capture point, you should cut thrust low to 30-50. This lowers your speed so you don’t slam into the ground and can more easily lift up afterward. Depending on your plane, you may be more agile and can play more dangerously.

Pilot perks refer to blackouts which may have to do with a g-force mechanic according to Enlisted patch notes.

Before getting into specific sections on flying, there are two more points worth mentioning. Solo pilots will always have a more difficult time because you’re relying on teammates marking enemies. When flying in the air, you can’t easily see where infantry or tanks are to prioritize. Which leaves you guessing and then requires more knowledge of the map you’re playing.

The second point is that you can damage your plane by being reckless with fast turns. If your speed is too high and you make a sharp turn or raise altitude too quickly, you can take damage. Also, there may be a g-force mechanic that can lead to your pilot blacking out. I haven’t experienced it personally, but old patch notes refer to it. This is simply another reason to manage your movement a little more smoothly.

How to Do Bombing Runs

If you’re using an attack plane with rockets, you can take advantage of them during a divebomb approach too.

The two main methods for bomber plane runs in Enlisted is strafing or divebombing. Strafing is where you’re make a quick strafing run over the point dropping a bomb before taking off. While divebombing is all in the name. You fly really high above the point, flip to pointing directly downward at the ground, drop your bomb, and take off. Both strategies work if you do them well.

Types of Bombing Runs in Enlisted

Once you’re above the target, drop your bomb. Then, max out your thrusters and lift up with your reticle/mouse cursor to high tail it out of there. You’re most vulnerable to AA turrets and tanks on the way in. So you want to get out quick.

The higher you are, the more time you’ll have to adjust and react. Drop your bomb around 300 altitude and then lift off so you don’t crash into the ground. The lower to the ground you are, the more accurate the bomb will be similar to our strafing explanation. The only challenge here is planning your altitude if you leave your thrust maxed. A good divebombing video is available here.

Not All Planes Are Equal 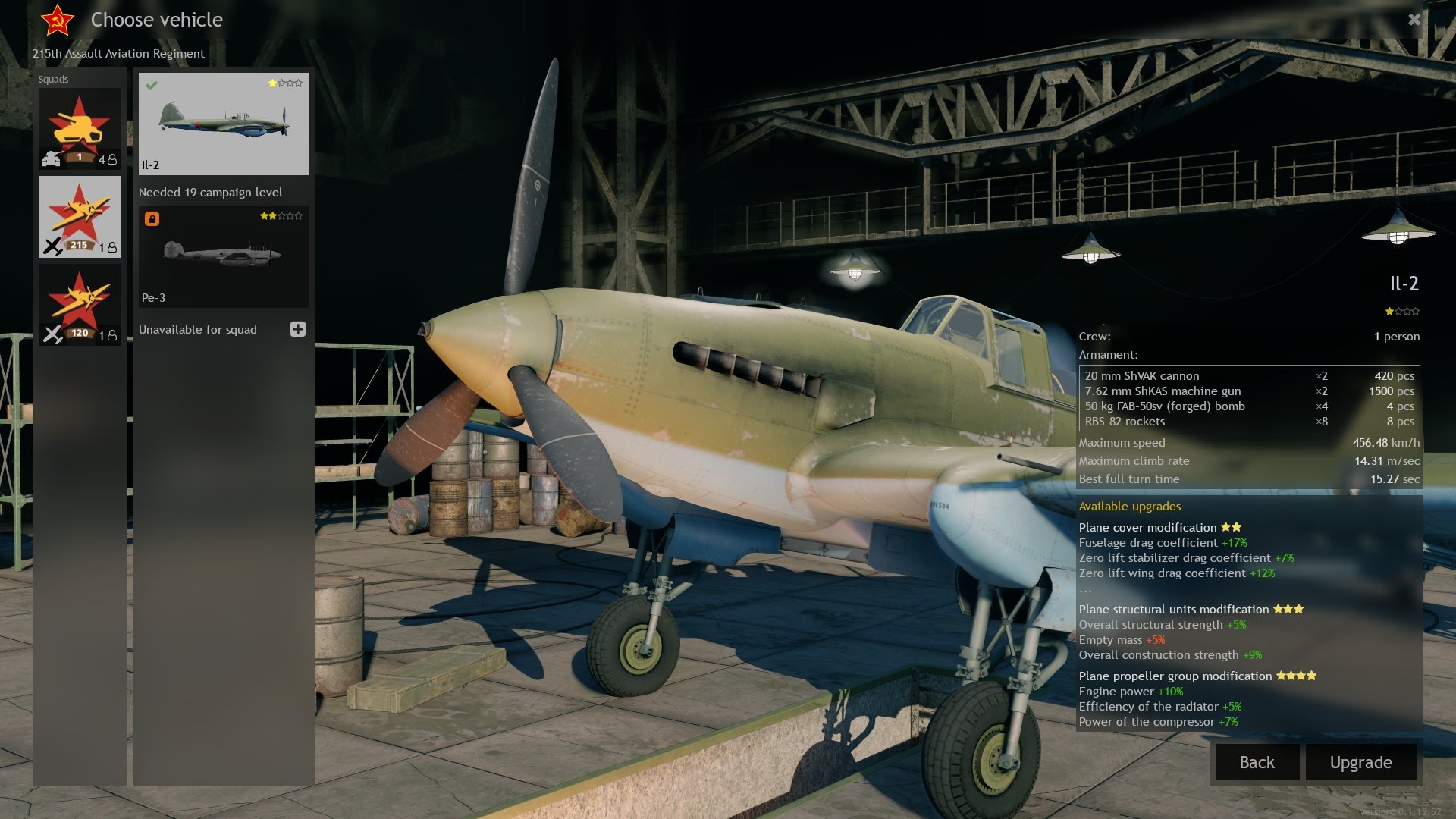 It’s important to look at what weapons are on a plane so you understand the bomb weights.

Aside from attack planes being used for bombing and fighters for dogfighting, there are differences. The main way bombers vary is that they can have different weight bombs. If you’ve ever watched an Enlisted video or seen a player in-game get 10-15 kills with one bomb, they’re probably usually higher weight ones. These likely impact a larger area and potentially deal more damage too. It’s important to acknowledge this because the starter attack planes have 50 kg bombs compared to larger ones at 250 kg. Don’t be surprised if you’re not wiping multiple squads with smaller bombs.

How to Dogfight Other Planes

You’re not always going to be the only plane in the air, which is why it’s important to dogfight well. While you can destroy other planes with a bomber or fighter plane, fighters are better due to their maneuverability. They can turn more easily and accelerate quickly for getting behind enemies. For those playing on PC, it’s important to use C by default to look around you. This helps with finding enemy planes if you’re not quite sure where they are yet. And if you’re in a fancy fighter plane, you may have access to combat flaps for turning even quicker. 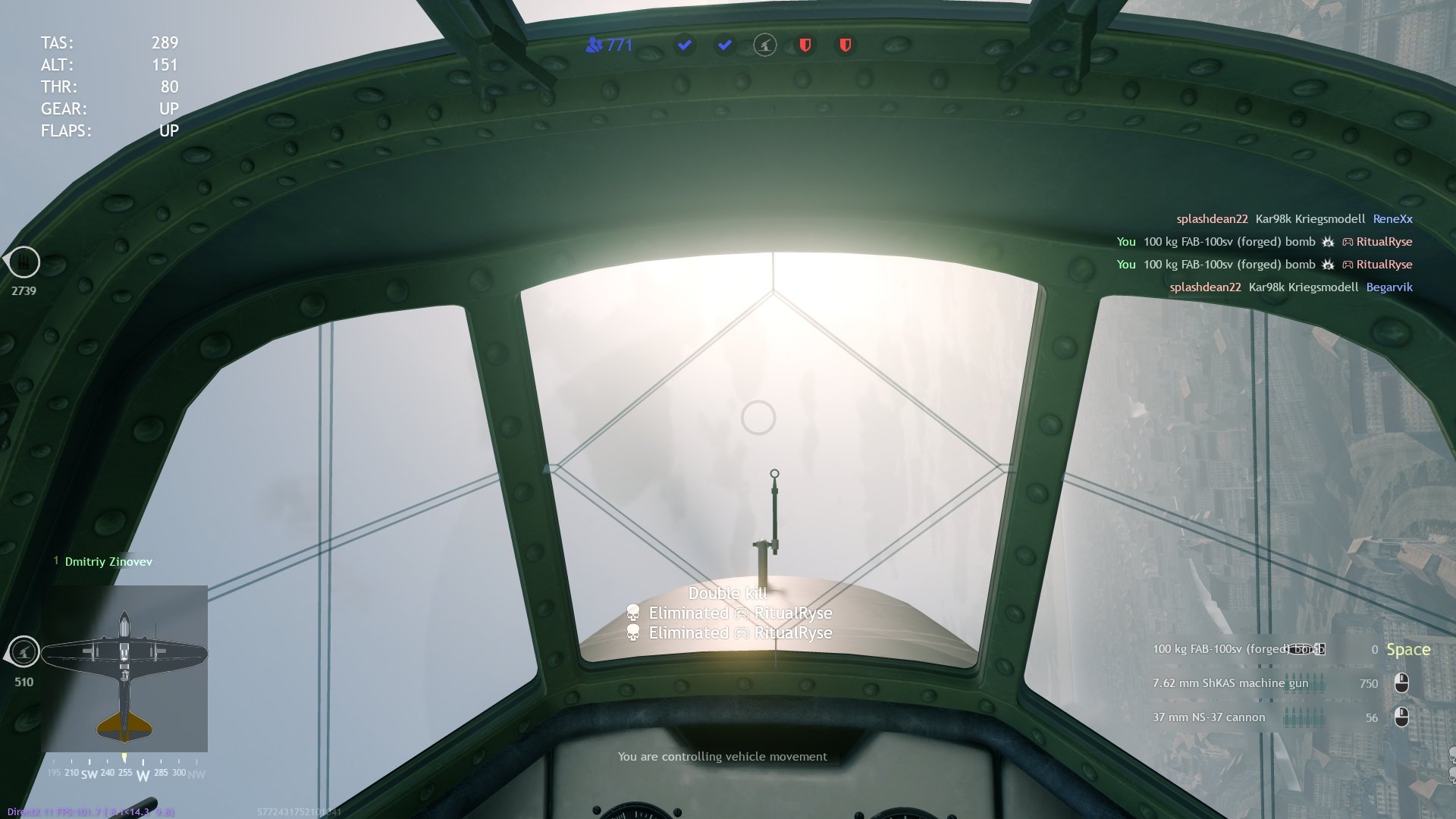 Don’t be afraid to turn your plane sideways when chasing another pilot. Just be sure to keep an eye on your altitude as it’s more likely to drop.

Now when it comes to fighting, it helps if you’ve played War Thunder before. However, the concept isn’t anything crazy, it’s still relatively simple. Once you start looking at an enemy plane from either a plane or AA turret, a small circle will appear in front of that plane. This accounts for travel time and the speed of the other plane, representing where you need to shoot. After a few shots, that plane will either blow up or quickly crash from damage.

A quick note worth mentioning is that fighter planes are still useful for attacking infantry and tanks too. While you won’t have bombs to drop, you’ll have machine guns for strafing runs and maybe even rockets too. Just remember that rockets often shoot lower than your reticle, so it helps to aim high.

How to Get Plane Ammo in Enlisted 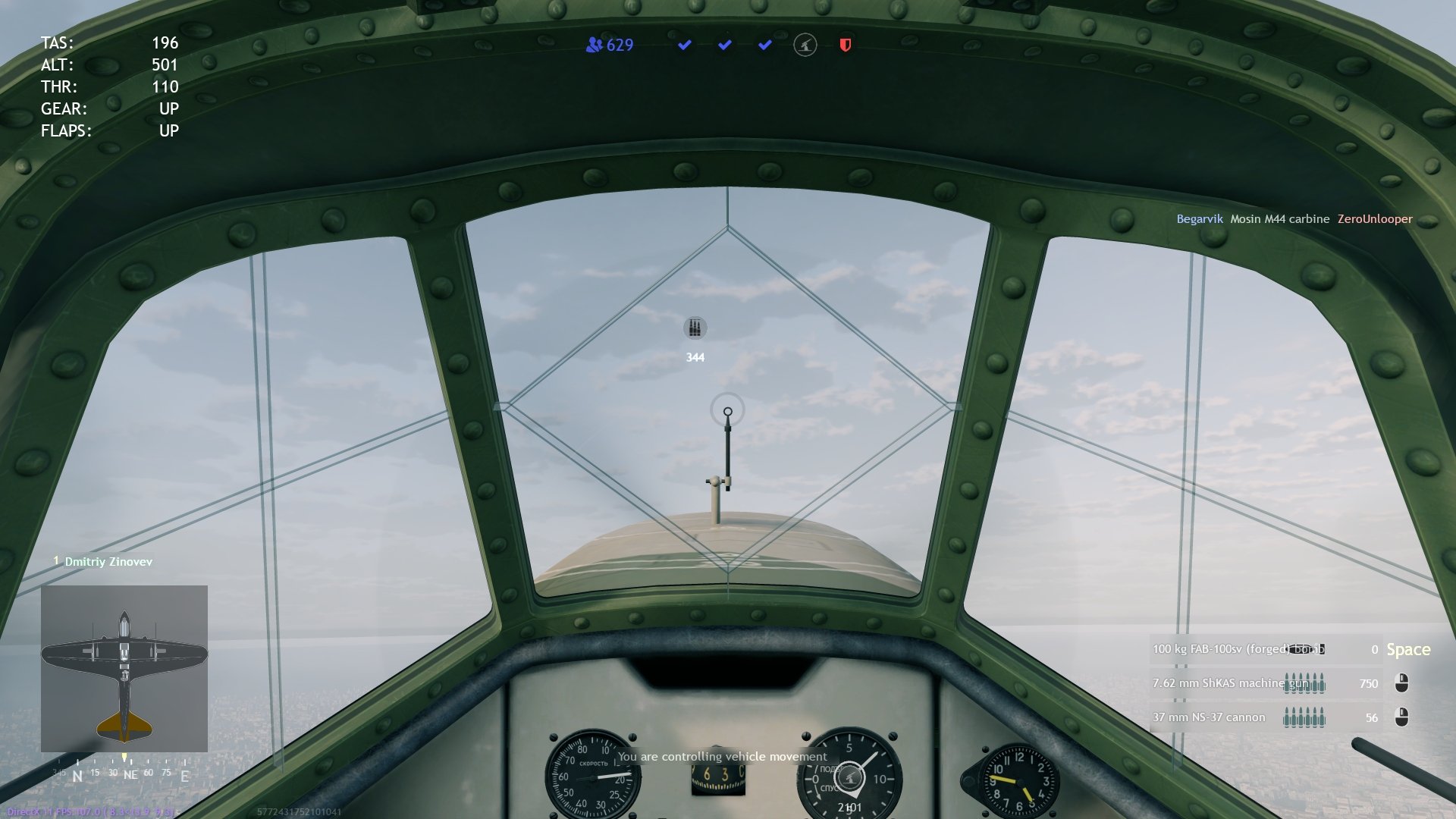 Once you reach that ammo icon in the sky, you’ll immediately recover all ammo.

The one question that almost every Enlisted player asks themselves is how to get ammo. Whether you’re in a plane or on the ground. It’s never quite explained. Fortunately, getting ammo in the air doesn’t rely on engineers. All you need to do is look back at where your plane spawned and you’ll see an ammo icon in the air. Once you reach the icon, all of your ammo will be instantly restored. And then you can get back into the fight. Another great trick is adjusting your rudder after resupplying to turn around quickly. This is Q and E for those on PC.

If you have any other Enlisted questions whether it’s on how to fly or not, comment below the article asking for help. Or if you have a flying tip for others, be sure to share it in the comments too. For more Enlisted tips and tricks, visit our guide hub here or check out other useful guides listed below.