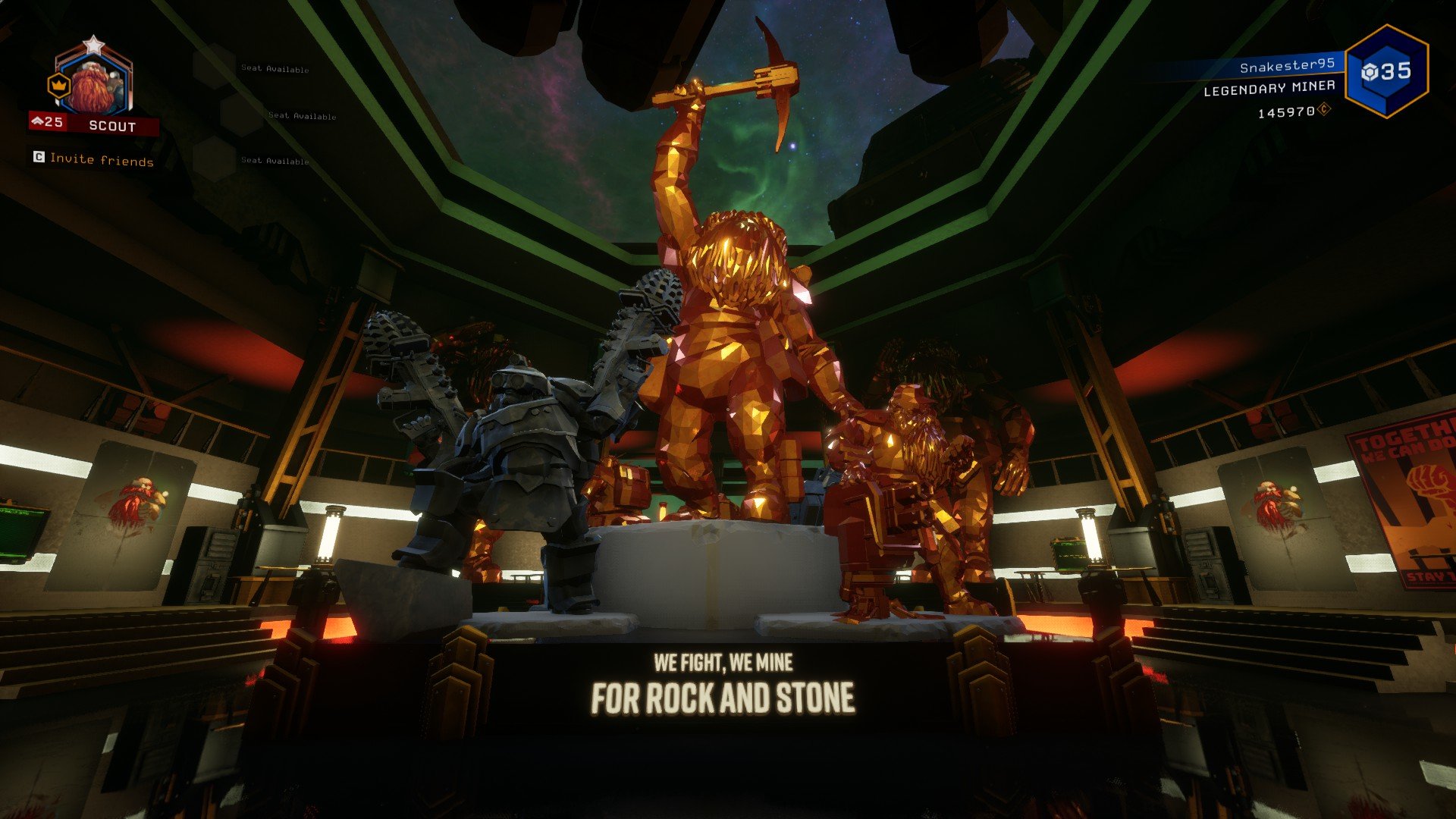 Welcome to our Deep Rock Galactic guide for answers to all the most commonly asked questions by the community. As there’s a good variety of questions from beginner ones to more complicated questions, feel free to use the table of contents below. Clicking any of the questions below will bring you right to an answer with in-detail information.

How to Get Perks 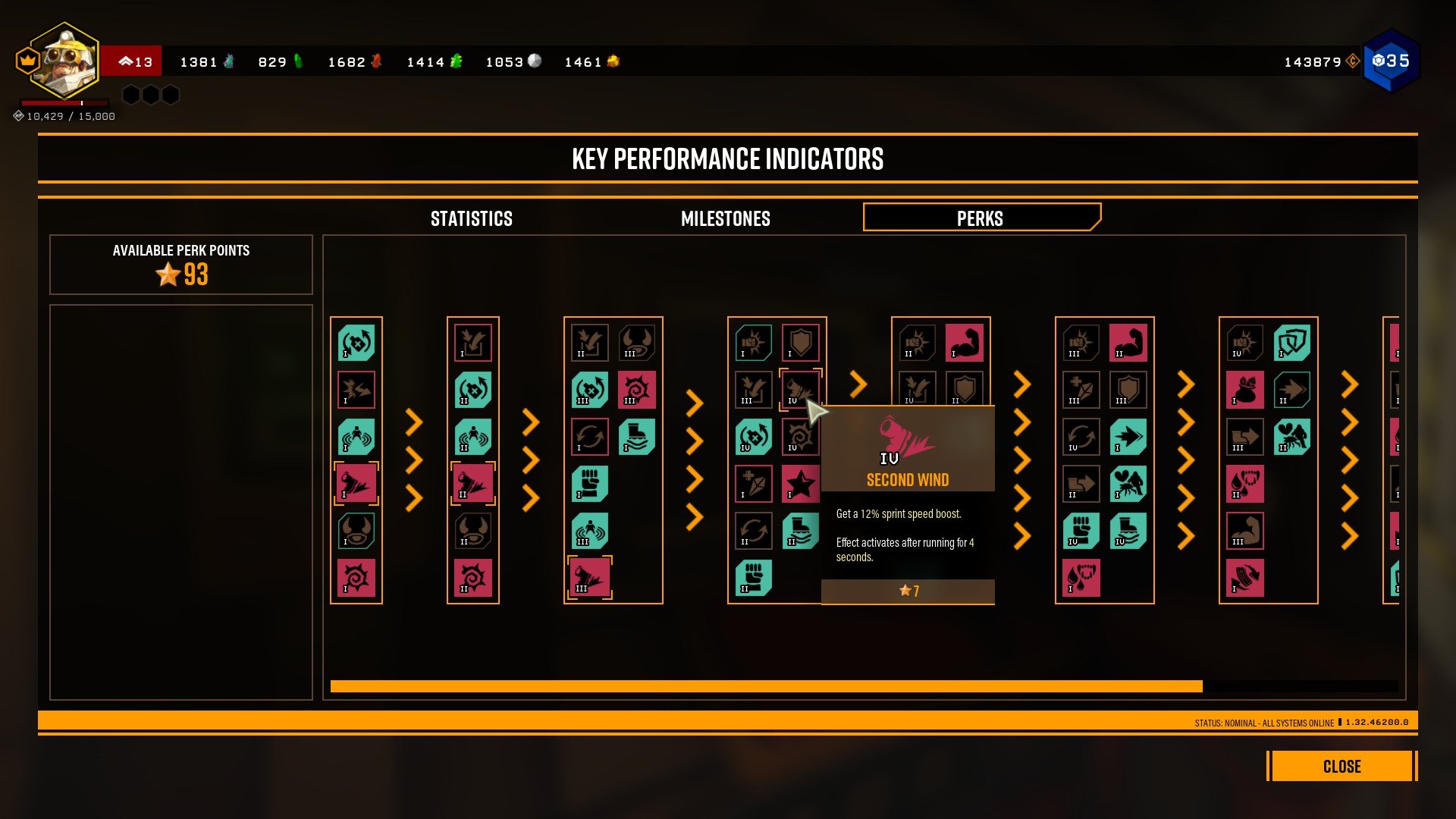 If you’re not sure how to get perks for your characters, here’s a quick guide explaining how it works. The perk system in Deep Rock Galactic has been overhauled a few times, so if you’re a returning player, things may look a little weird. Before you can unlock any perks, you’ll need to get perk points by completing milestones. These are goals that you’ll passively complete by simply playing the game such as completing missions or gaining levels on different characters. You can find the milestones and perks tab near each other inside the pod at base, on the Mission Statistics/Review Key Performance Indicators computer.

Make sure to check your milestones page every so often for completed tasks so you can get your perk points from them. Then, head over to the perks tab to see the screenshot above where you can unlock new perks. If you’re not sure how to equip perks, you can do this at the Equipment computer, left of the Assignment Board. This window shows all your equipped gear as well as a column of slots to the right of your weapons on the left side. Click each slot to equip an unlocked perk.

How to Use Bosco in Deep Rock Galactic 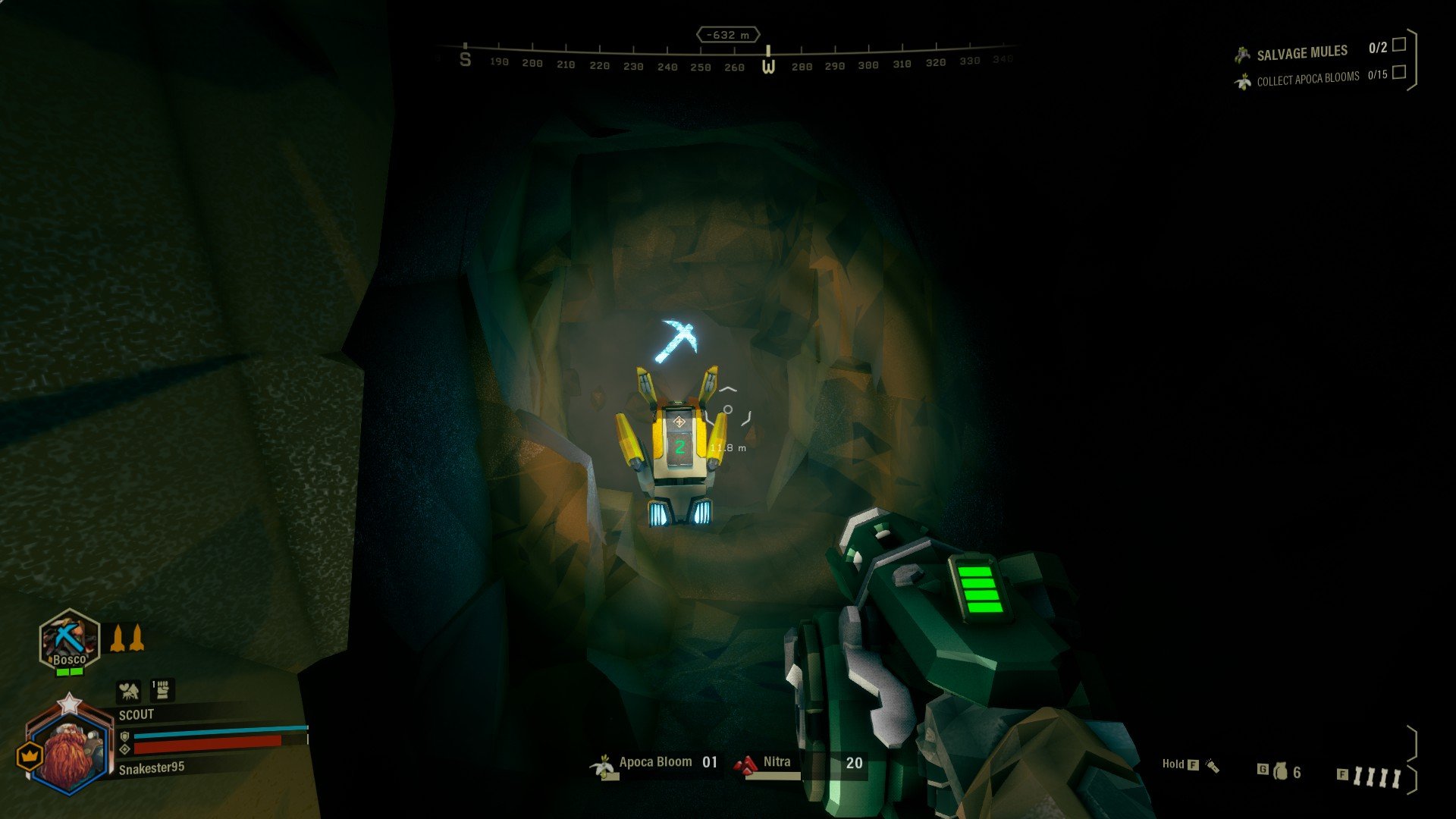 When you play Deep Rock Galactic alone, you’ll have a small drone following you around named Bosco. So long as you go into a mission via the solo mode option, the difficulty will be scaled to you as well as having Bosco to help. Here are a few ways below to take advantage of Bosco while playing alone. 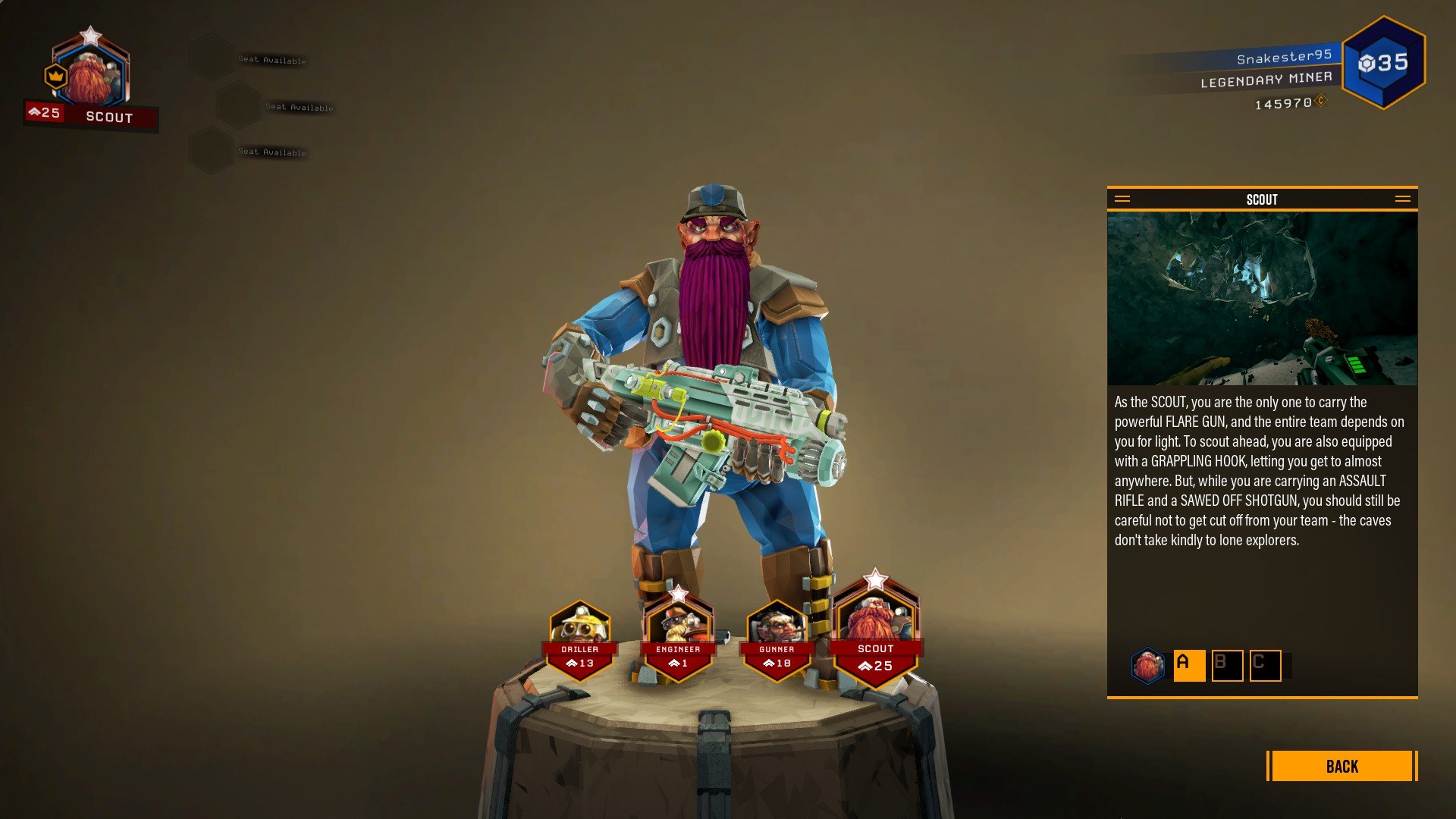 The best solo class in Deep Rock Galactic tends to vary for most people, but I prefer the Scout for their mobility. Depending on the difficulty and mission you’re playing, different classes have their advantages. This is an area where developer Ghost Ship Games excels at making every class important. However, I recommend the Scout since they can kite around/escape enemies easily using the Grappling Hook. Their damage potential is high with upgrades and overclocks, but you still need to keep an eye out for Nitra on higher difficulties.

If you’re playing below Hazard 3, I wouldn’t worry too much about picking the best class. However, once you push past Hazard 3, swarms can definitely become overwhelming. Before pushing high hazard difficulties, make sure to upgrade your weapons and equipment. This makes a significant difference against hordes of bugs. Be sure to let us know in the comments what class you think is best.

What Does Beer Do? 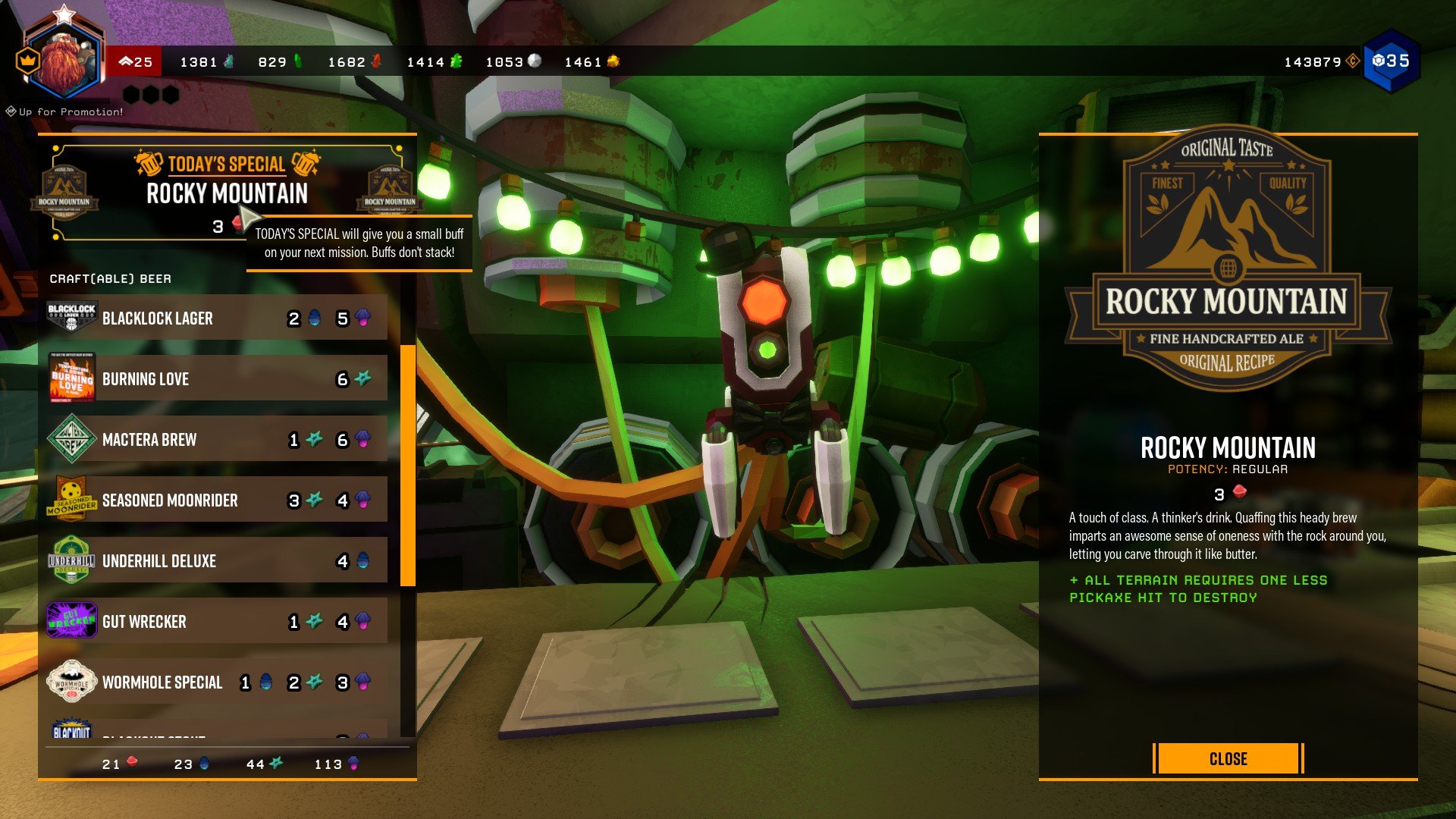 Deep Rock Galactic has all different types of beer that you can drink for buffs and silly purposes. By talking to the robot bartender, Lloyd, you can buy Today’s Special at the top for a buff or craft beer below that for silly effects. Instead of needing money or minerals for beer recipes, you’ll need ingredients from your missions. And before you can craft silly beer recipes, you’ll need to upgrade your beer license by spending credits and ingredients.

If you want to get your character completely drunk, the Glyphid Slammer for 85 credits will help you out. But if you need to sober up, you can drink the Leaf Lover’s Special for 25 credits. Also, it’s useful to know that when you buy beer, Lloyd provides a mug for each player in the lobby. Otherwise, here are a few examples of buffs you can receive from beers under Today’s Special.

How to Salvage Mules in Deep Rock Galactic 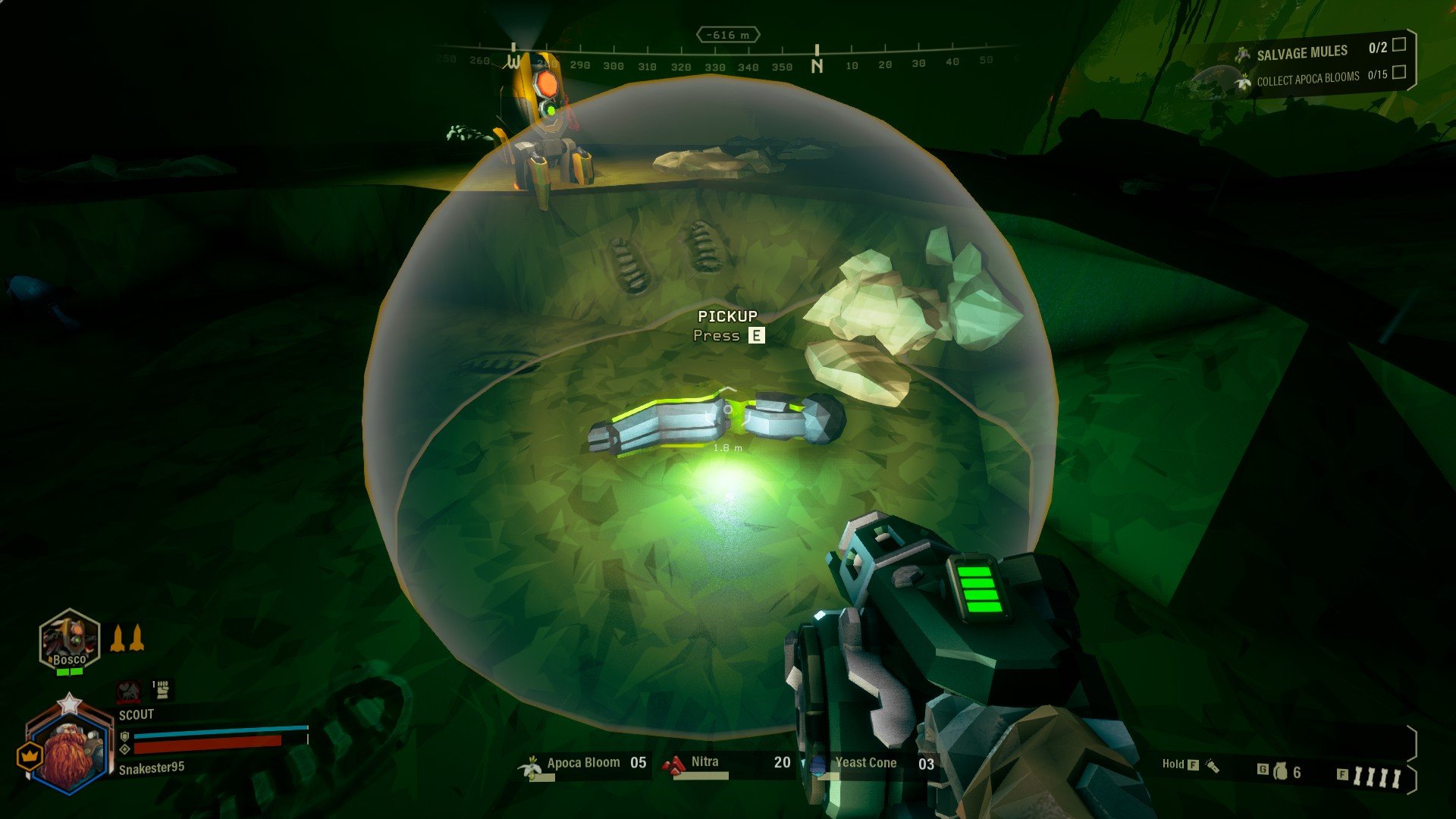 If you’re not sure how to Salvage Mules in the Salvage Operation mission, here’s a quick explanation. First, you’ll need to find a damaged mule that makes a beeping sound and has a green aura around it. Then, look for legs in the nearby area that have a white aura around them. You may need to dig the legs out before you can pick them up. Afterward, bring them back to a damaged mule to replace its legs. Once you’ve brought three legs to a damaged mule, you can repair it so it comes back to life. The next step in the mission once you’ve salvaged all mules is as simple as pressing the button on Molly to, “Return to Drop Pod”.

How to Unlock Weapons 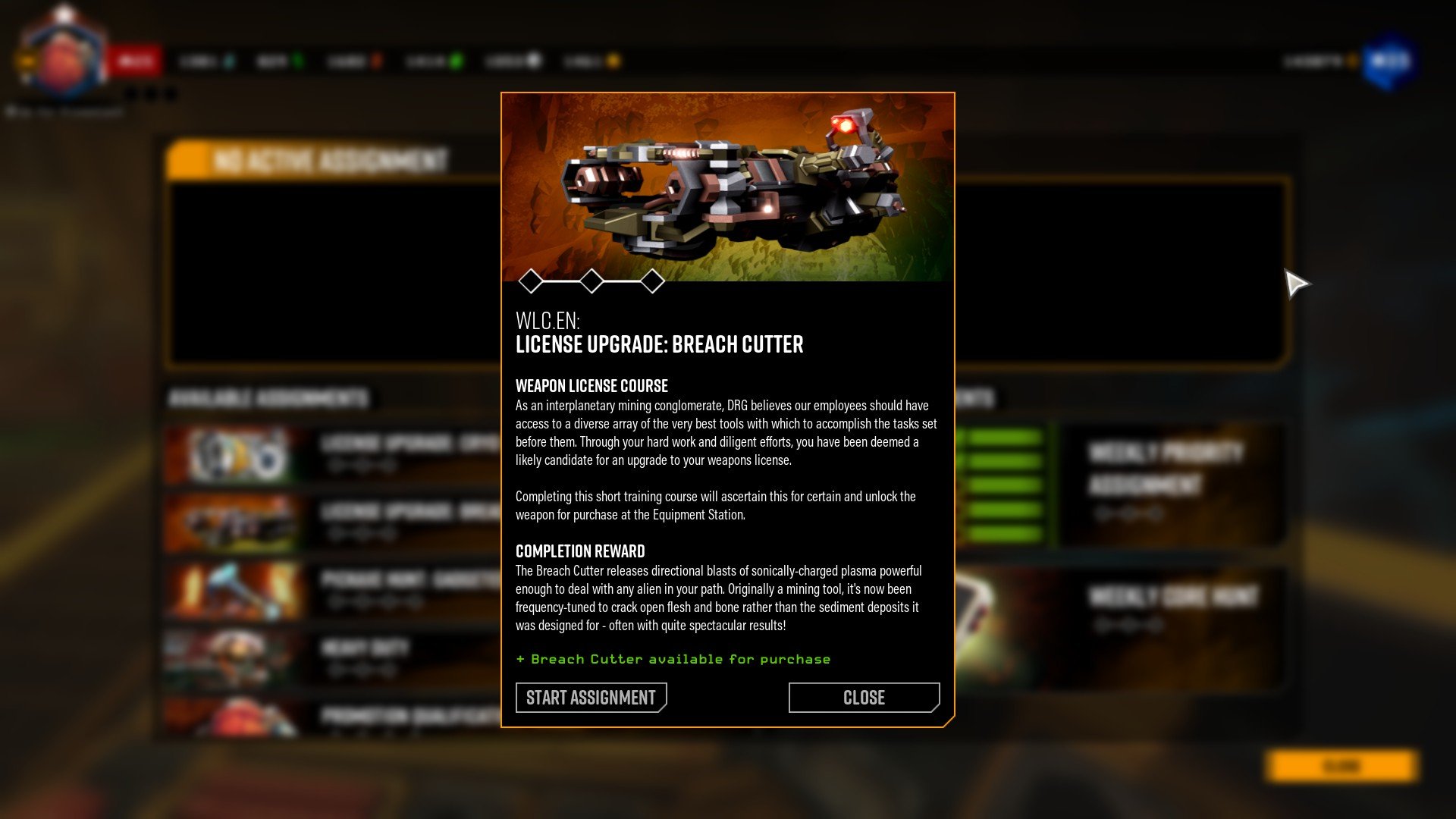 All four classes in Deep Rock Galactic start with two weapons unlocked and two weapons locked. Before you can unlock the locked weapons, you’ll need to reach a certain class level and then complete an assignment. While I can’t confirm it, I believe it’s level 15 for each new weapon. Regardless, you can check the requirements on the Assignment Board by looking for License Upgrade assignments. These will have the weapon name in the assignment name.

Once you’ve completed the assignment for a new weapon, return to the Equipment computer where you can buy it. All you need to do is have the right class chosen, click your primary or secondary weapon, and then there will be a tab to swap weapons.

How to Get Pickaxe Parts 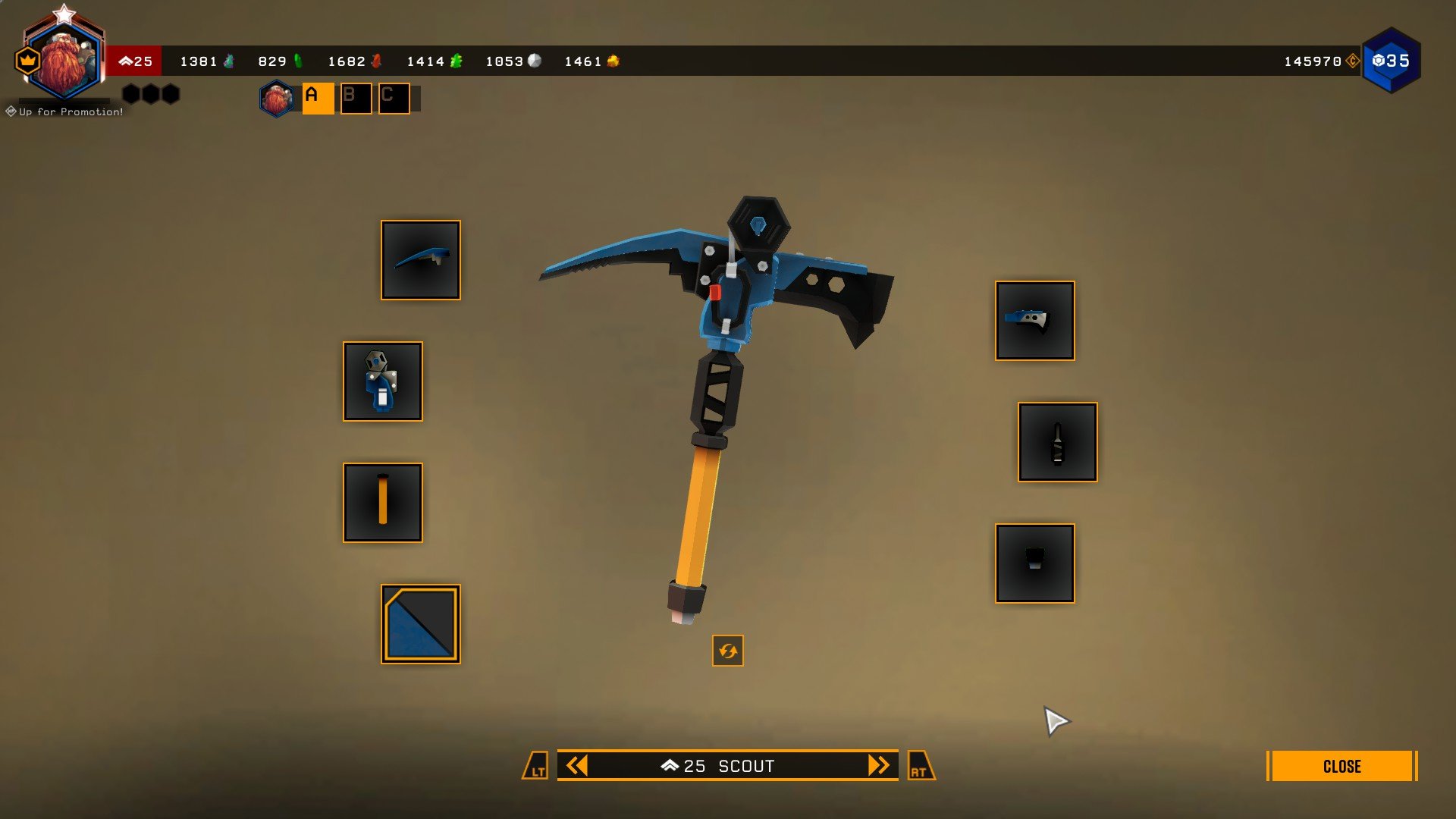 If you’re wondering how to get pickaxe parts to customize your own pickaxe like the screenshot above, here’s how. You’ll need to complete Pickaxe Hunt assignments. These will give you a full set of pickaxe parts as shown in the screenshot. If you’re not sure where to customize your pickaxe, you can do this to the left of the equipment computer where it says, “Pickaxe Customization”.

How to Get Overclocks 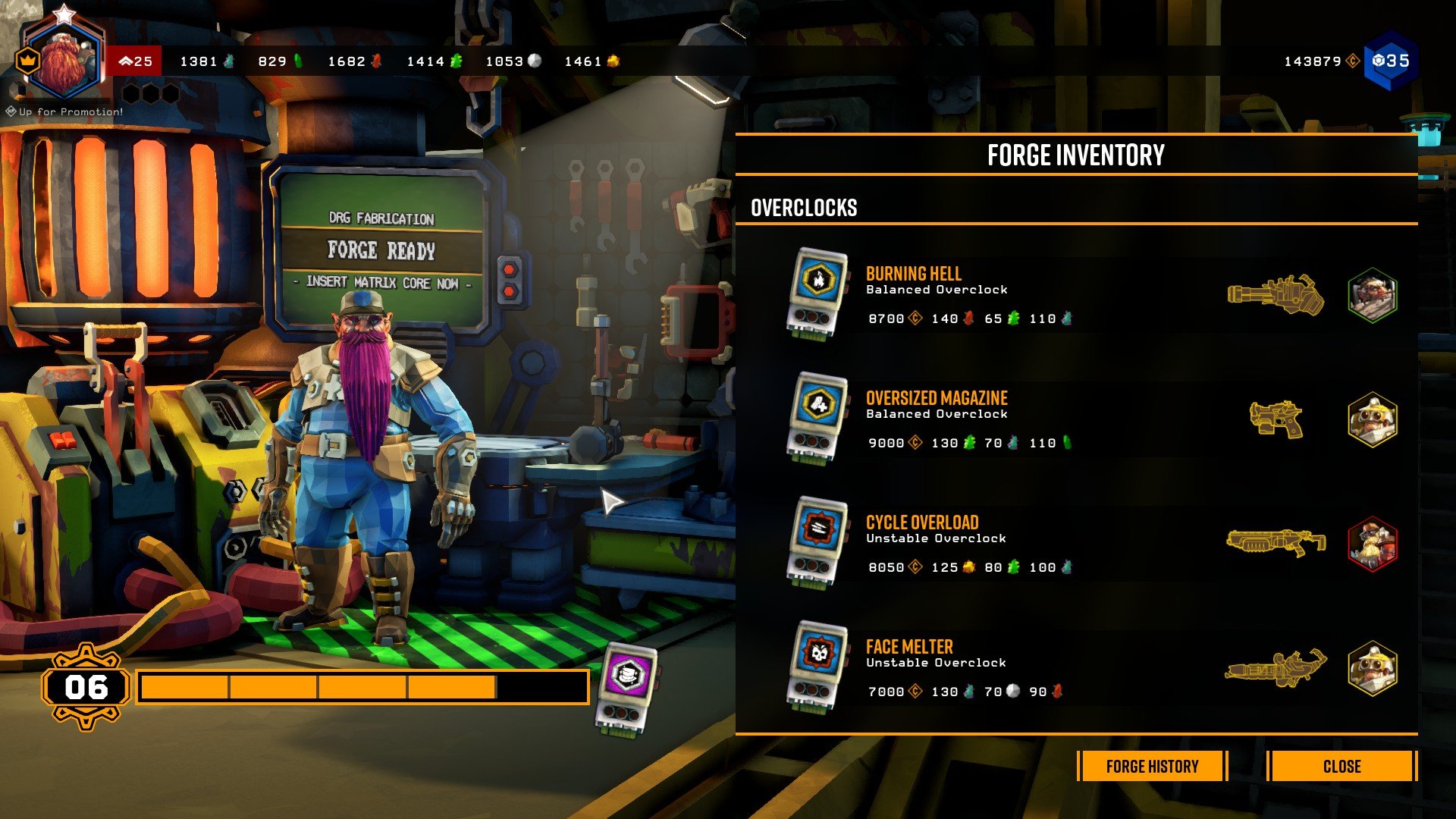 How to Promote in Deep Rock Galactic 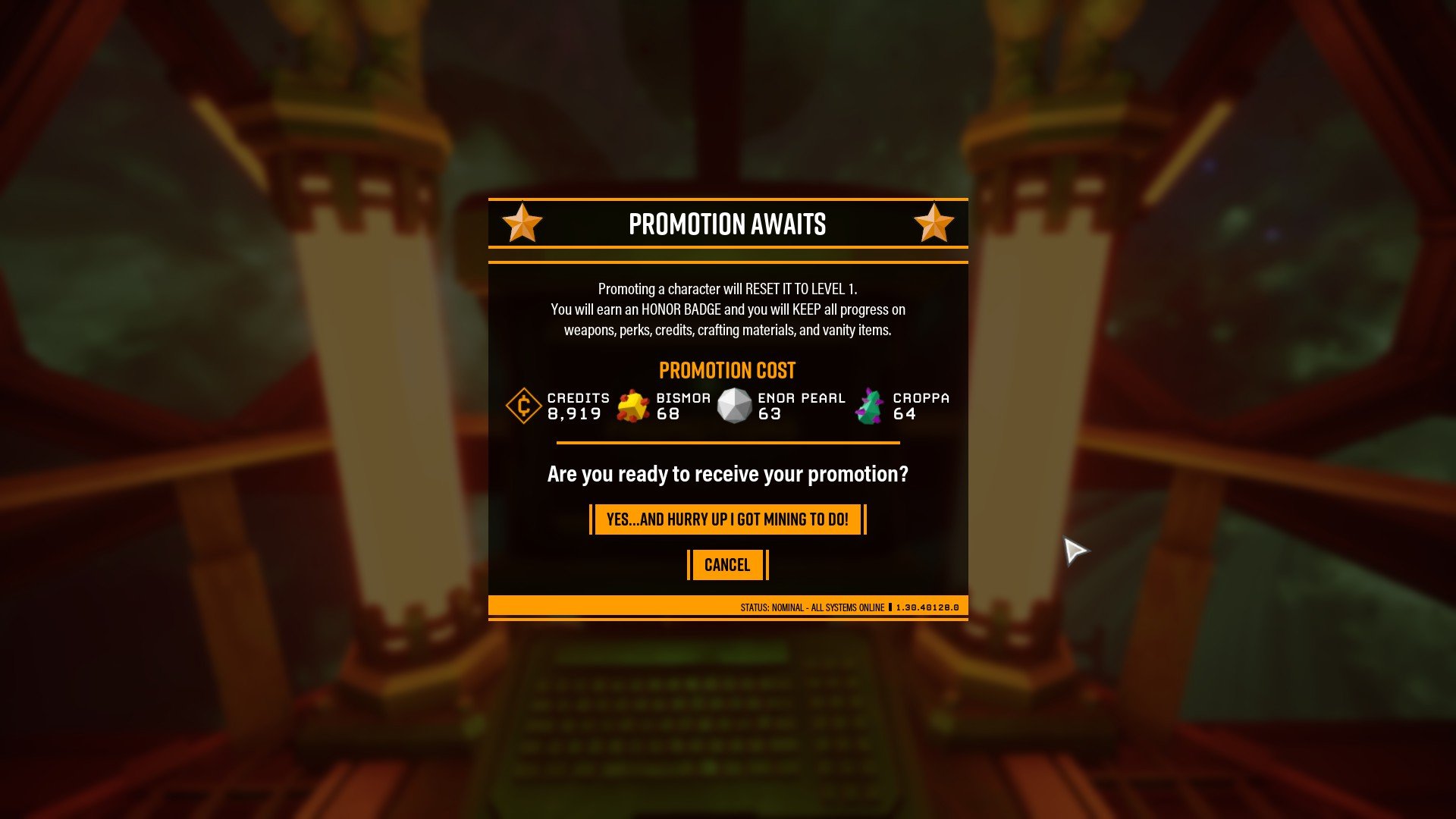 If you’re wondering how to promote your character, you’ll need to first reach level 25 with a class. Then, go to the Assignment Board where you’ll find a Promotion Qualification assignment for your class. By completing the four missions attached to this assignment, you can then spend credits and minerals to promote your class. You can head to the Character Selection terminal in your cell to promote or the Promotions computer in the Memorial Hall. For further information about promoting like if you lose anything or why to promote, head to our guide here.

Can You Kill the Ghost

If you’ve played a Deep Rock Galactic mission with a Haunted Cave warning, you may have run into a ghost creature. Unfortunately, there’s no way to kill the ghost bug, and you’ll just need to avoid it while working on your mission. As long as you don’t let it get close to you, it can’t do its short-range explosive attack. While playing with others you can use the laser pointer to mark it for a short amount of time.

What Are Deep Dives 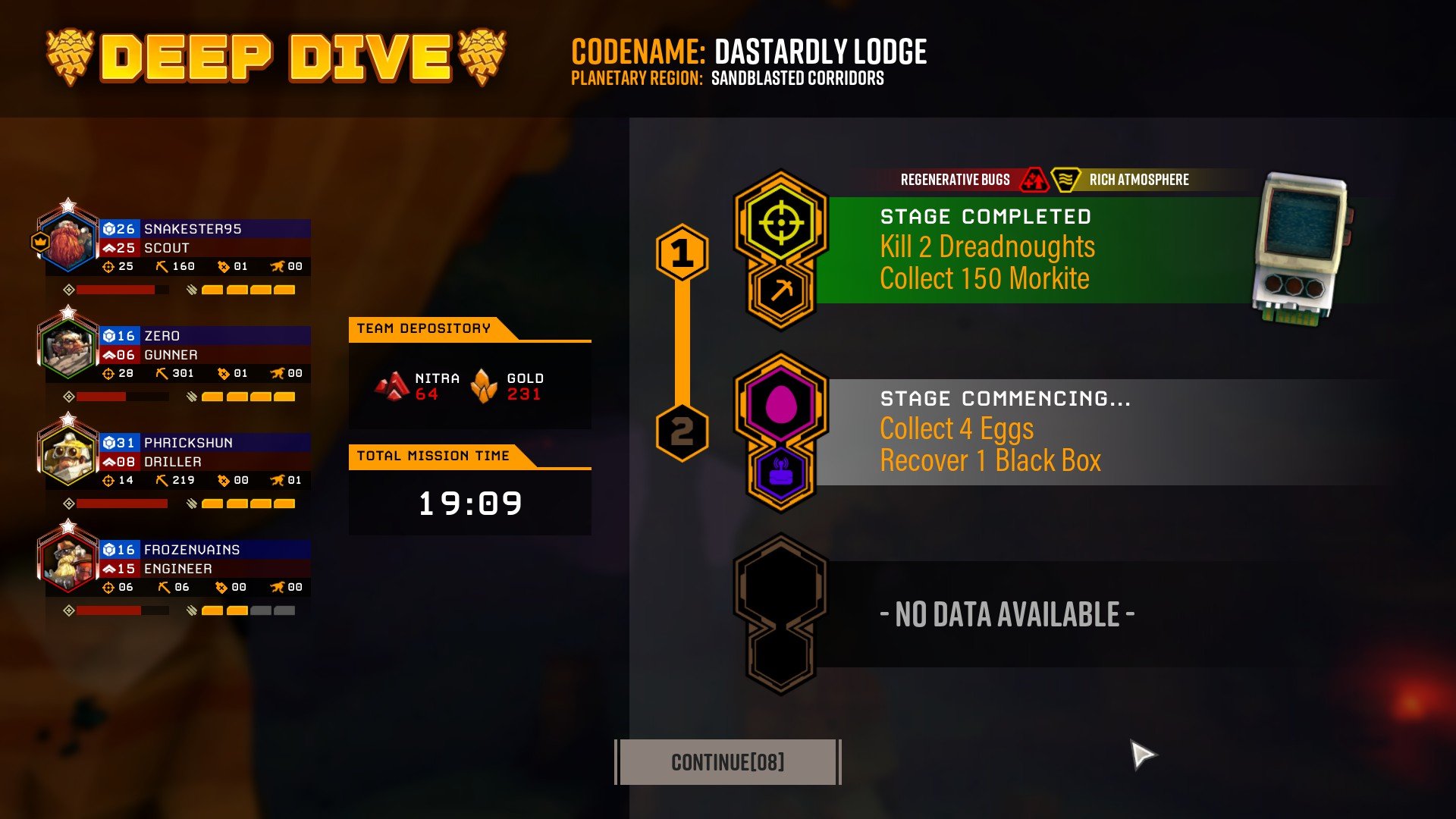 Deep Dives are end-game content added in Update 25 for people who have a promoted class. Unlike normal missions that are one and done, Deep Dives are a set of three missions combined. Your ammo, health, and Nitra carry over between missions until you’re finished with them all. Also, Deep Dive missions have two primary objectives, unlike other missions that have one primary and an optional secondary. Mission examples are shown in the screenshot above.

Something neat about Deep Dives is that they’re the same seed for all Deep Rock Galactic players. This means everyone is experiencing the same group of missions for that week. Also, it’s important to know that players can’t join Deep Dives that are in-progress unless they’re trying to reconnect. Deep Dives also provide Matrix Cores for use at the base’s Forge.

Does Mining Extra Morkite Give XP 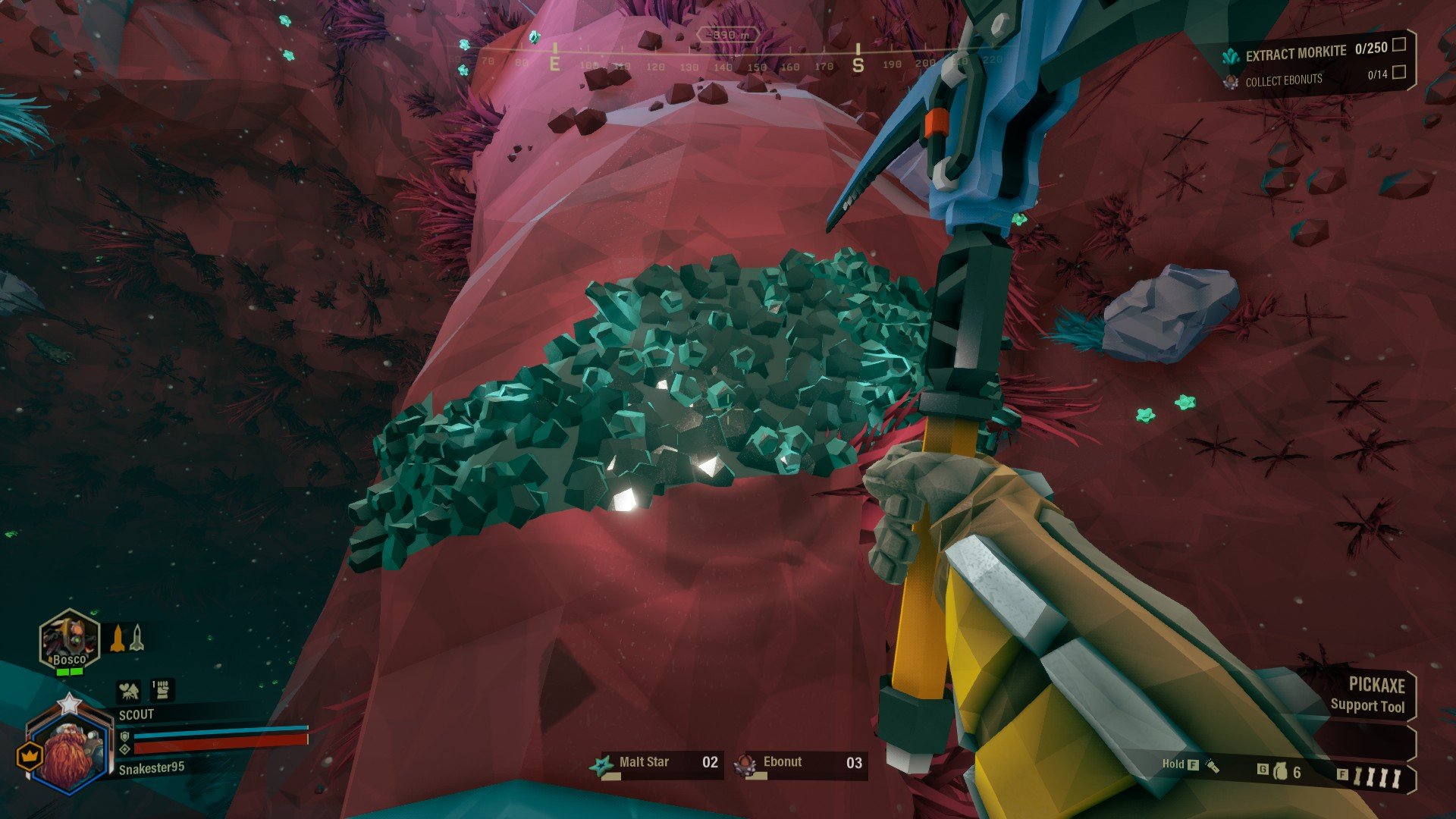 If you’re wondering whether you get anything from mining extra Morkite during Mining Expedition missions, you do. Any extra Morkite mined provides a small amount of experience mentioned in the end screen as, “Minerals Mined By Team“. This is grouped in with other minerals that provide experience, so it’s difficult to say how much is from Morkite specifically. However, a developer at Ghost Ship Games has confirmed that you don’t gain a lot.

Who is Karl in Deep Rock Galactic?