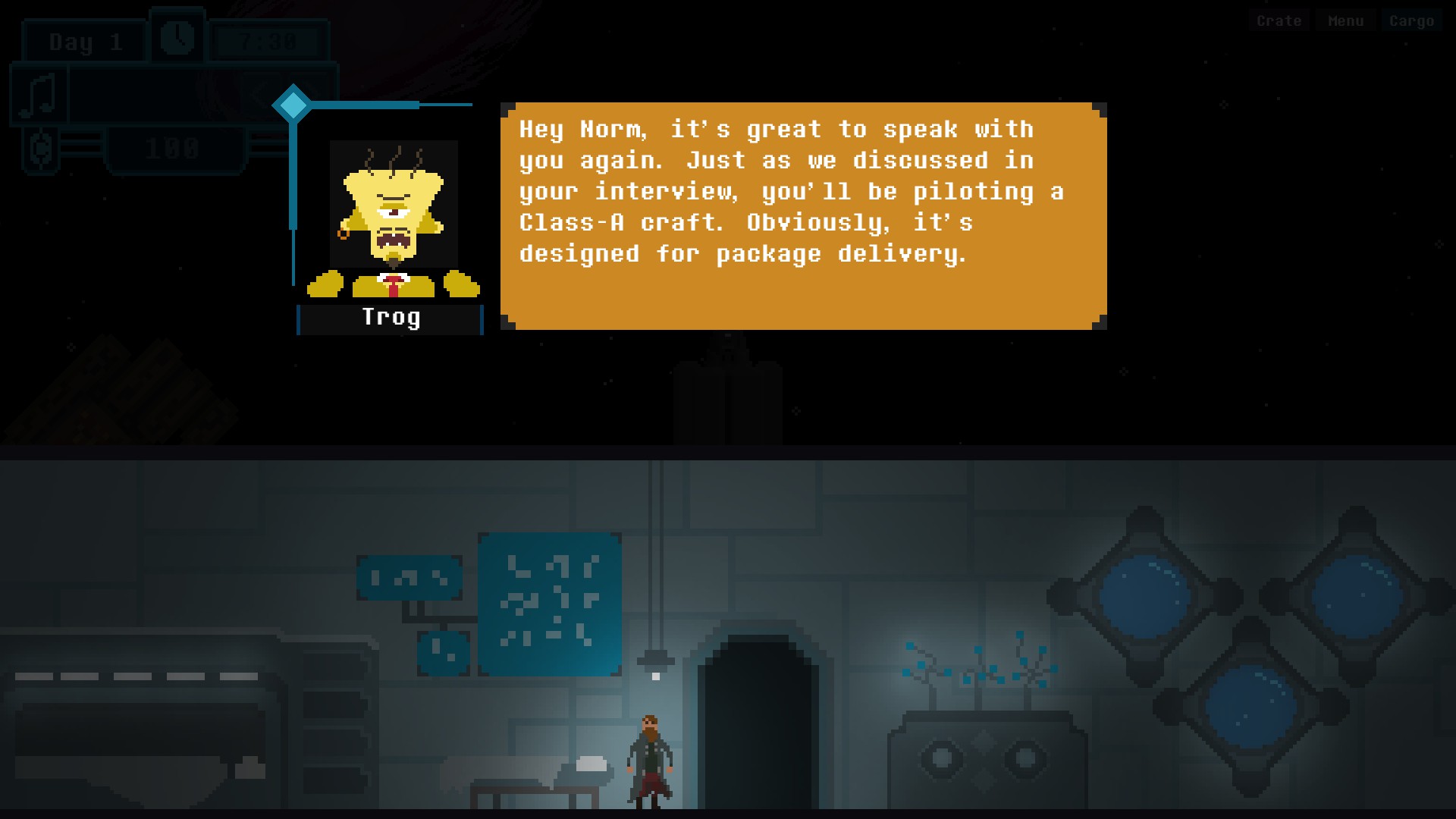 Galactic Delivery is exactly what you would expect from a $1.99 game. You can get an hour out of it, but you can also find yourself completely done after 30 minutes. It doesn’t do anything to make itself stand out and it doesn’t do anything in the other direction either.

A game like Galactic Delivery could be a lot more interesting if it had a strong story to it. Instead, it’s as plainly put as the name of the game. You’re delivering packages in space. That’s almost literally all there is to it. On rare occasions, the developer attempts to toss in a little story, which is welcomed but then gone. Each day you wake up ready to deliver more packages, you can already feel the stamina waning on you.

Do I really want to take the full eight packages to deliver? Or should I simply pick one package, deliver it, and then decide if I want to deliver any more from side jobs. This is how I felt after 25 minutes into the game. It slows down once you realize there’s not much else going on.

Galactic Delivery starts out with the player becoming an intern at a delivering company in space. You have 14 days to perform your job and see if you’re good enough to become a full-time employee with the company. As you deliver packages, you’ll come across a variety of planets with a few unique character races. 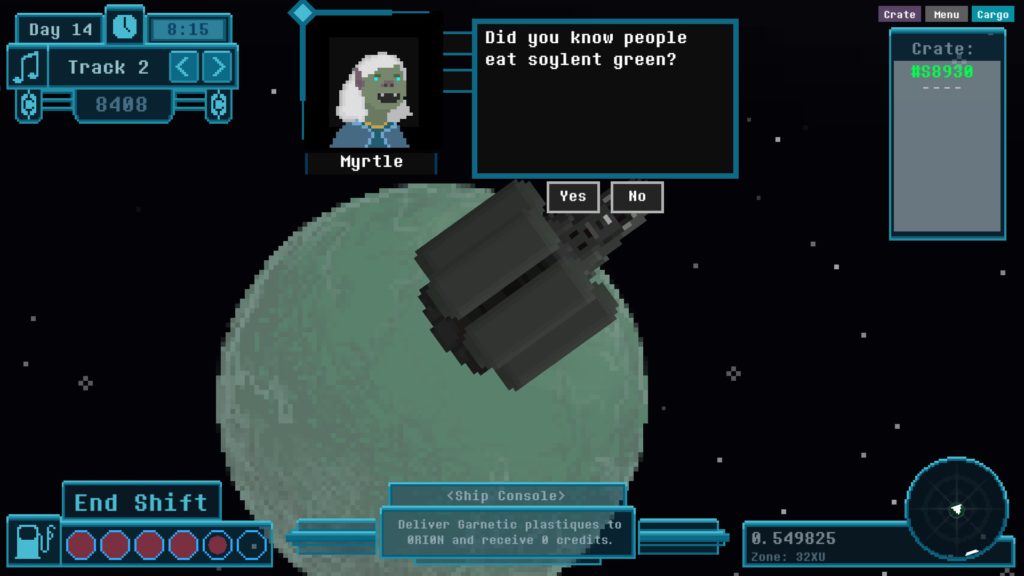 The dialogue at planets is often quite generic along the lines of, “Are you delivery guy?” or “The delivery guy is here”. The characters aren’t unique enough for it to be exciting when you arrive with a package. It’s simply just another package for another person. You’re not the most important delivery person in the universe, saving lives with packages, or delivering vital envelopes. You’re what you would expect from a delivery person.

You get to the planet, they ask who it is, you drop off the package. And you’re on your way, headed into the next warp tunnel, dodging asteroids along the way. Because of this simple gameplay, Galactic Delivery gets boring pretty quick. Once again, for its price point, you can only expect so much from its development. However, this is where I think a storyline or a linear storyline could make for a unique game.

It could be a side job at a planet where someone approaching you needs you to deliver a gift for their son’s birthday. Or perhaps a mission where you’re a courier and delivering a letter to prevent a war from happening. But, if you fail to deliver that letter on time, war breaks out, and your boss gets angry at you. Perhaps 10 days into your 14 day internship, you learn that your company is part of an evil galactic corporation. 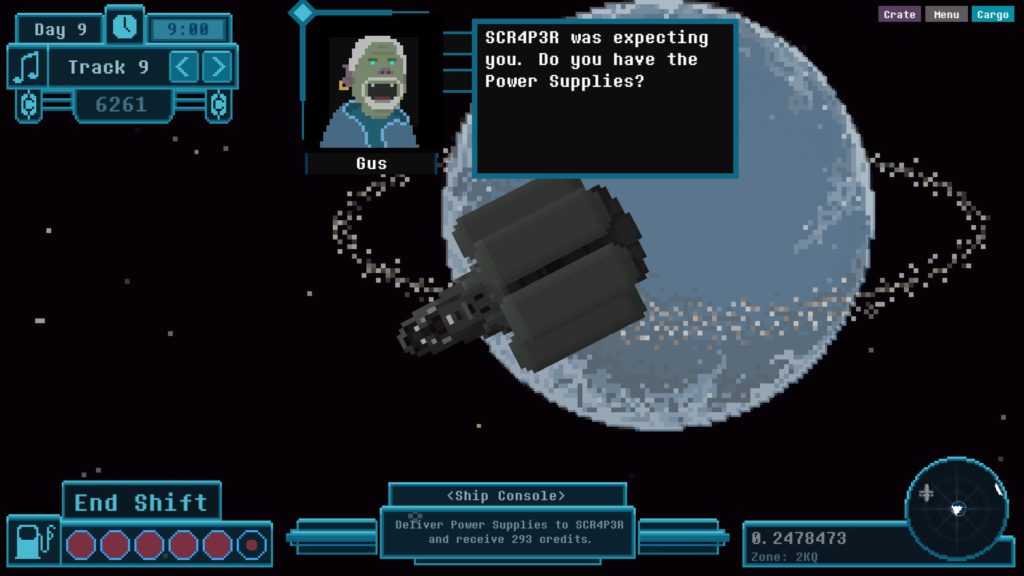 The developer throws in a tiny bit of story, making you want more and instead leaves you with nothing. It’s also almost questionable why there’s any currency in the game, as you’re flooded with it and barely have any need to spend it. After one day of jobs, you can easily be set on paying for fuel and trading goods for the rest of the game. It doesn’t take much to be rich in this game.

Therefore, there’s no need to worry about having the lousy 50 currency for filling up your fuel. Especially when you can get 400-500 currency off of one delivery, in one day. Players can also purchase trading goods from each planet they find in the universe, and then flip it back at their home planet. However, the most expensive trading good I saw was 140, with the cheapest being 3. When you’re loaded with money and make a profit of 20 on an item, so you can then spend that money on nothing, it’s silly.

The developer could have put more effort into balancing the currency in Galactic Delivery. Either lowering the reward on delivering packages, raising the cost of fuel, raising the cost of trading goods, etc. Some sort of way that doesn’t make money feel so useless. Perhaps toss in a random daily fee or weekly fee for renting your place or your ship. Something to give you a goal where you think, “I need to make this much money today or I’ll lose.”

Galactic Delivery provides little content with peaceful music, unfortunately only delivering a solid 30 minutes of gameplay at most. It’s available on Steam, developed by Warp Path and published by Yak Studios LLC

Galactic Delivery was provided by the developer via a Steam code.