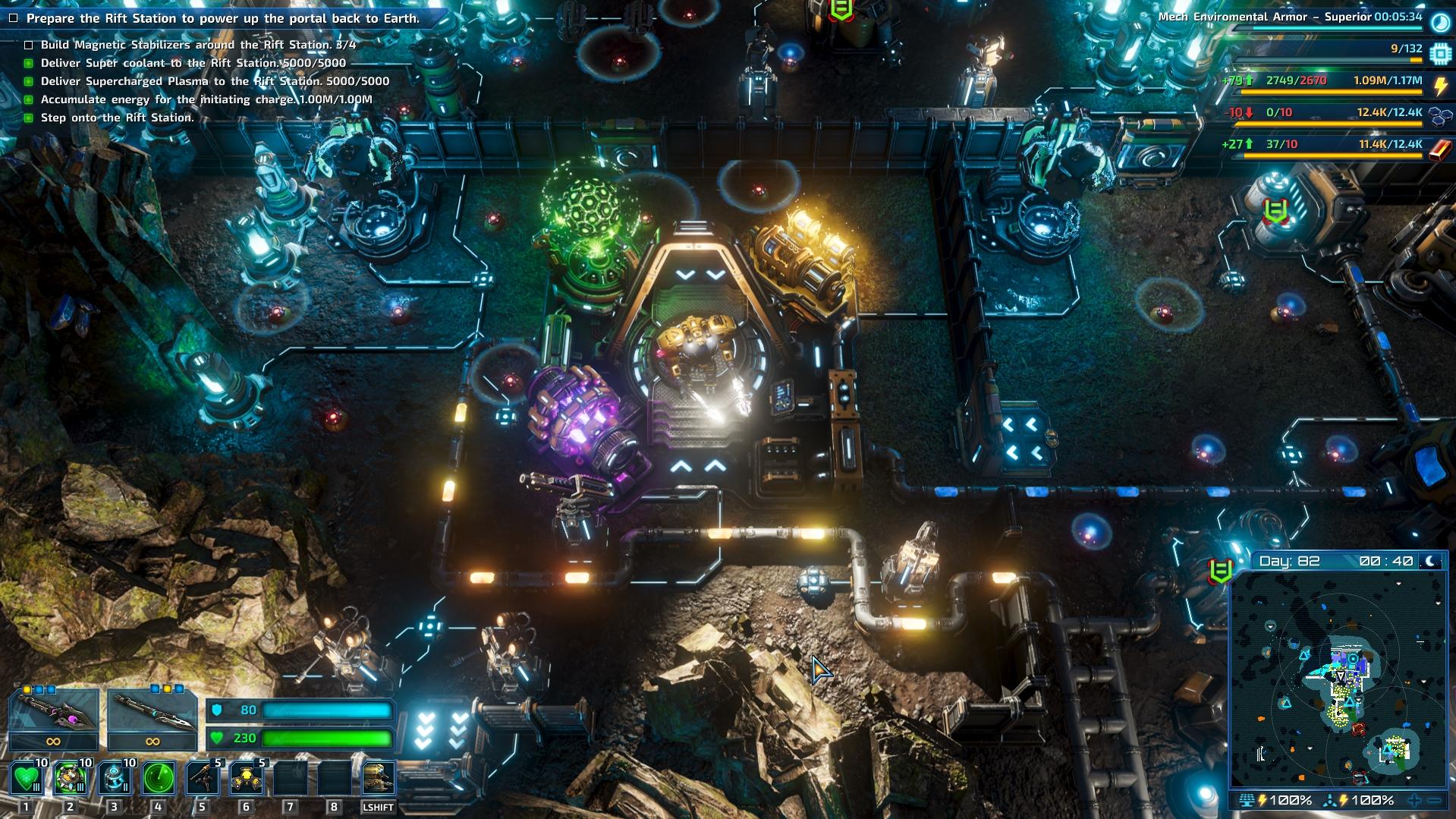 If you’re not quite sure how to use the Rift Station in The Riftbreaker, this guide is for you. Your main mission as Ashley S. Nowak was to reach the planet Galatea 37 and create a portal back to Earth. This is where the Rift Station comes in once you’ve completely powered it and connected the necessary resources.

Continue reading our guide below for how to use the Rift Station, how to get Supercharged Plasma, how to get Super Coolant, and more. If you actually meant to visit our guide on How to Use Rift Portals, feel free to head there instead.

How to Use the Rift Station in The Riftbreaker 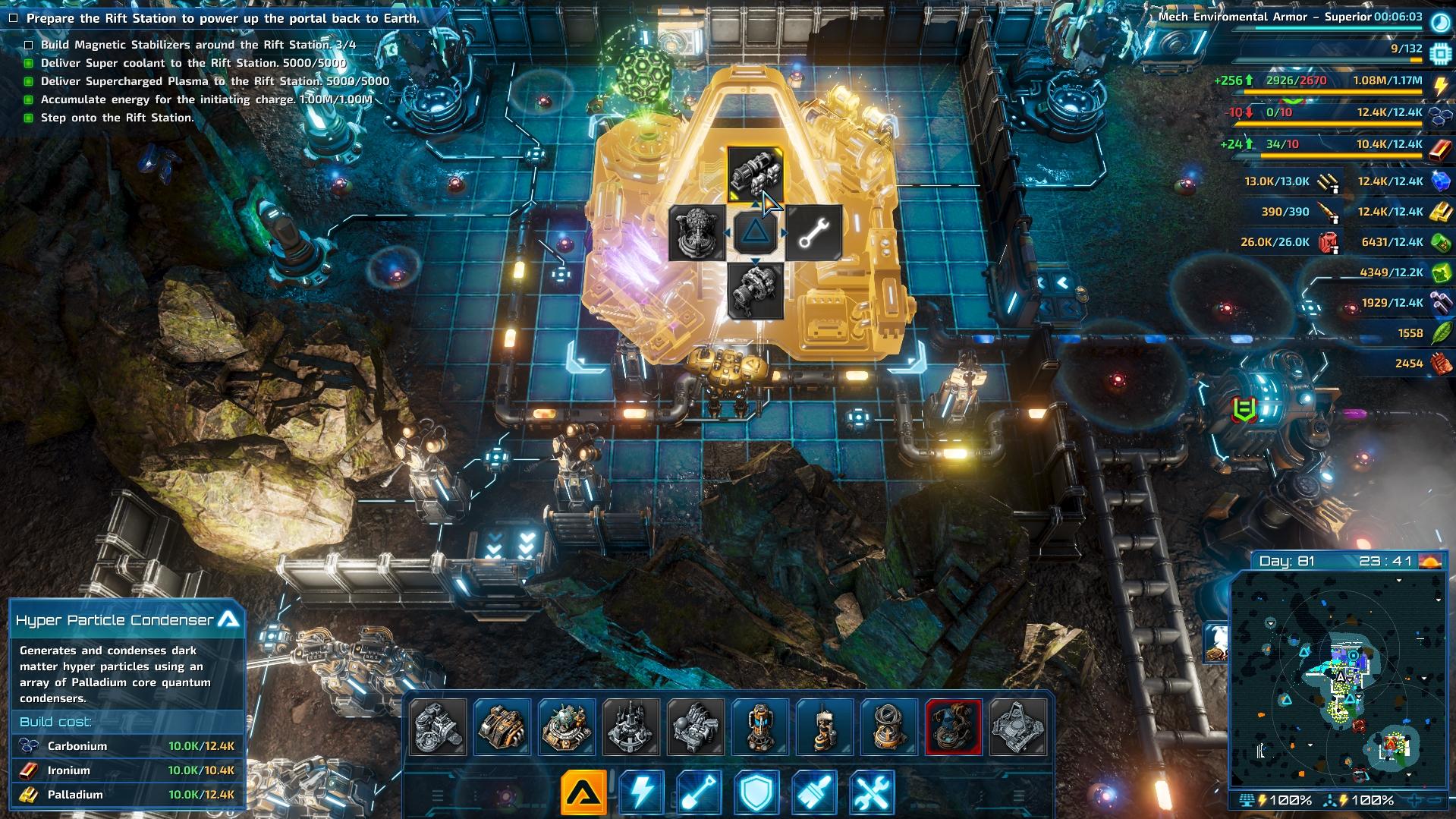 Make sure you’ve finished building the Rift Station before trying to activate it. One of the three parts is the Hyper Particle Condenser.

Getting this portal up and running can be a tedious process since you need all sorts of resources to activate it. Before you even get close to activating it, you’ll need to explore Galatea 37 for certain resources. These are then used to build three different extensions onto the Rift Station. Afterward, you’ll need to complete the following objectives for the mission, “Prepare the Rift Station to power up the portal back to Earth”.

If you’ve already completed every objective above, then it’s a relatively simple process to use the Rift Station. Depending on your Riftbreaker platform, these instructions will vary a tiny bit. For those of you playing on PC, all you need to do is hover your mouse cursor over the Rift Station, click, and click the triangle button. 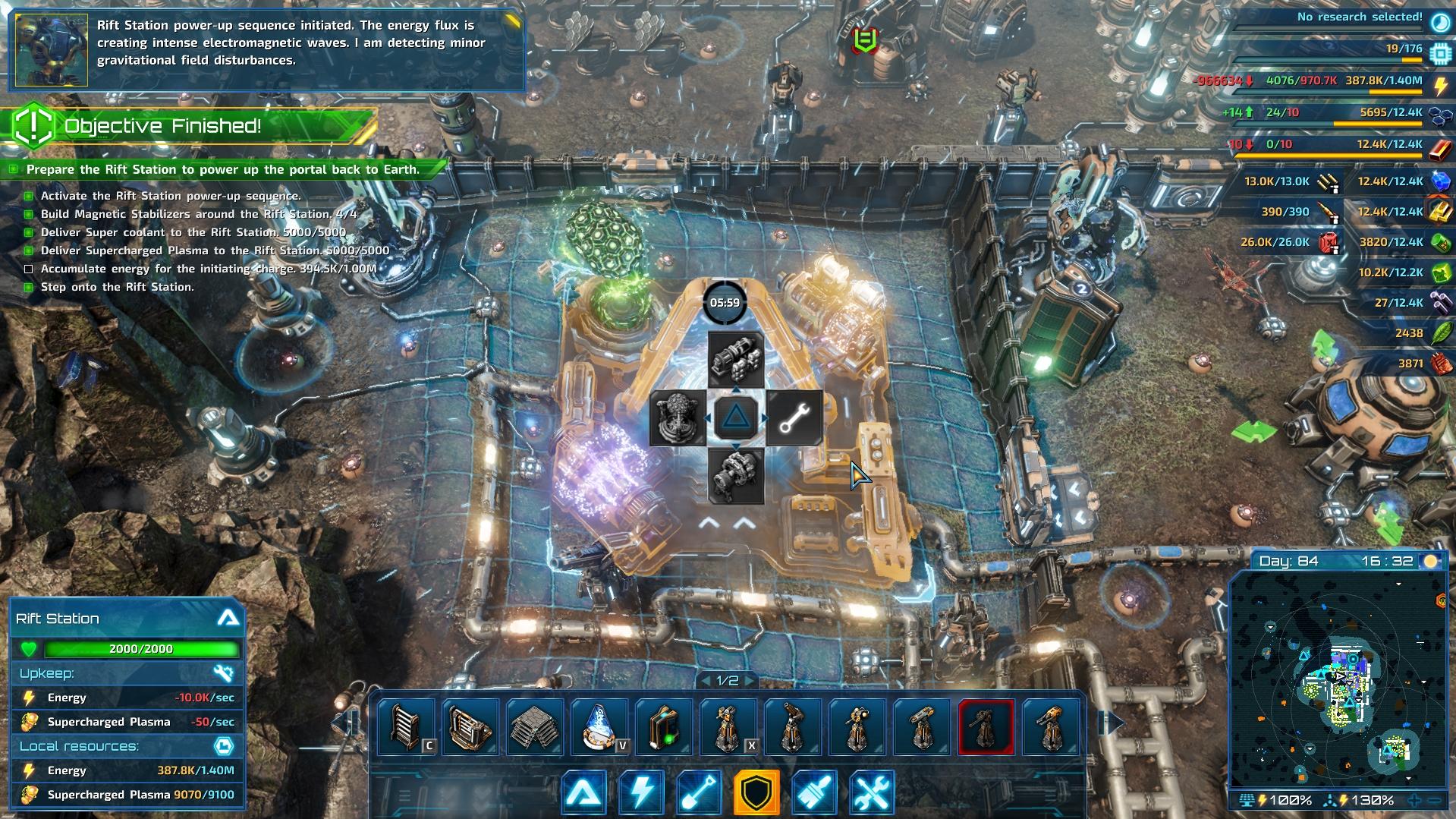 Get ready for a long massive alien attack once you turn it on.

This is similar to interacting with a Headquarters or Armory building to open other menus. Even though you can skip that process by simply opening the pause menu and cycling between tabs. However, for this mission, you can’t use the pause menu. Once you’ve clicked the triangle button, a massive swarm of aliens will attack your base.

You’ll need to survive for 100 seconds and prevent it from running out of power, Super Coolant, and Supercharged Plasma. Even if you’ve met the 1 million energy goal, you’ll still need to keep up with the 10k energy used per second when it’s activated. This can be almost impossible if you don’t take advantage of Fusion Powerplants. 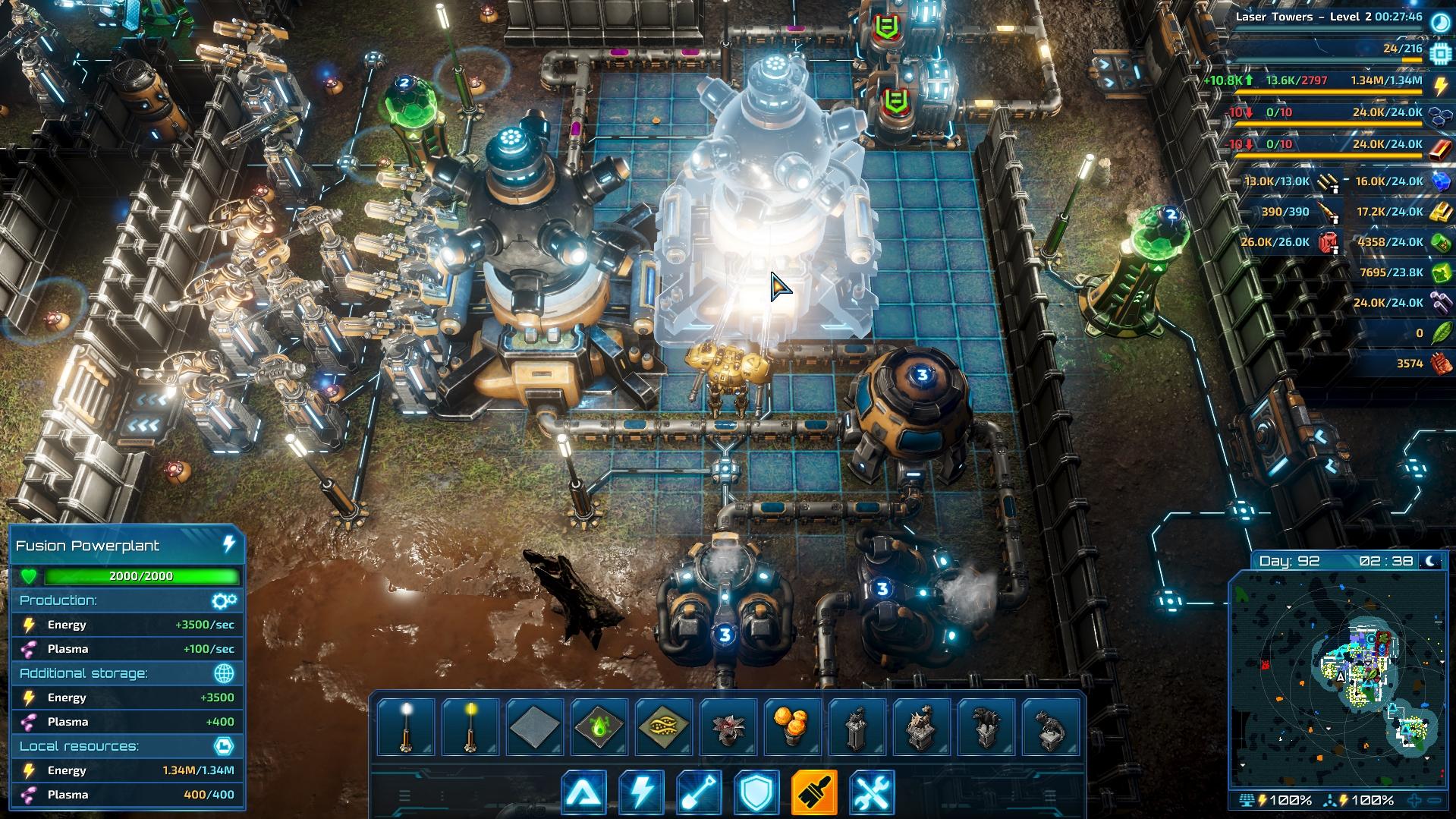 The Fusion Powerplant is easily the best power source in The Riftbreaker. Unless there’s a hidden one further up the tech tree I haven’t seen yet.

Other energy sources struggle to keep up with powering your base and the Rift Station simultaneously. However, it’s not impossible if you take advantage of upgraded versions of each building. With that said, the Fusion Powerplant is still superior since it provides 3.5k energy per second. So you’ll likely only need a few alongside the rest of your energy production in The Riftbreaker. 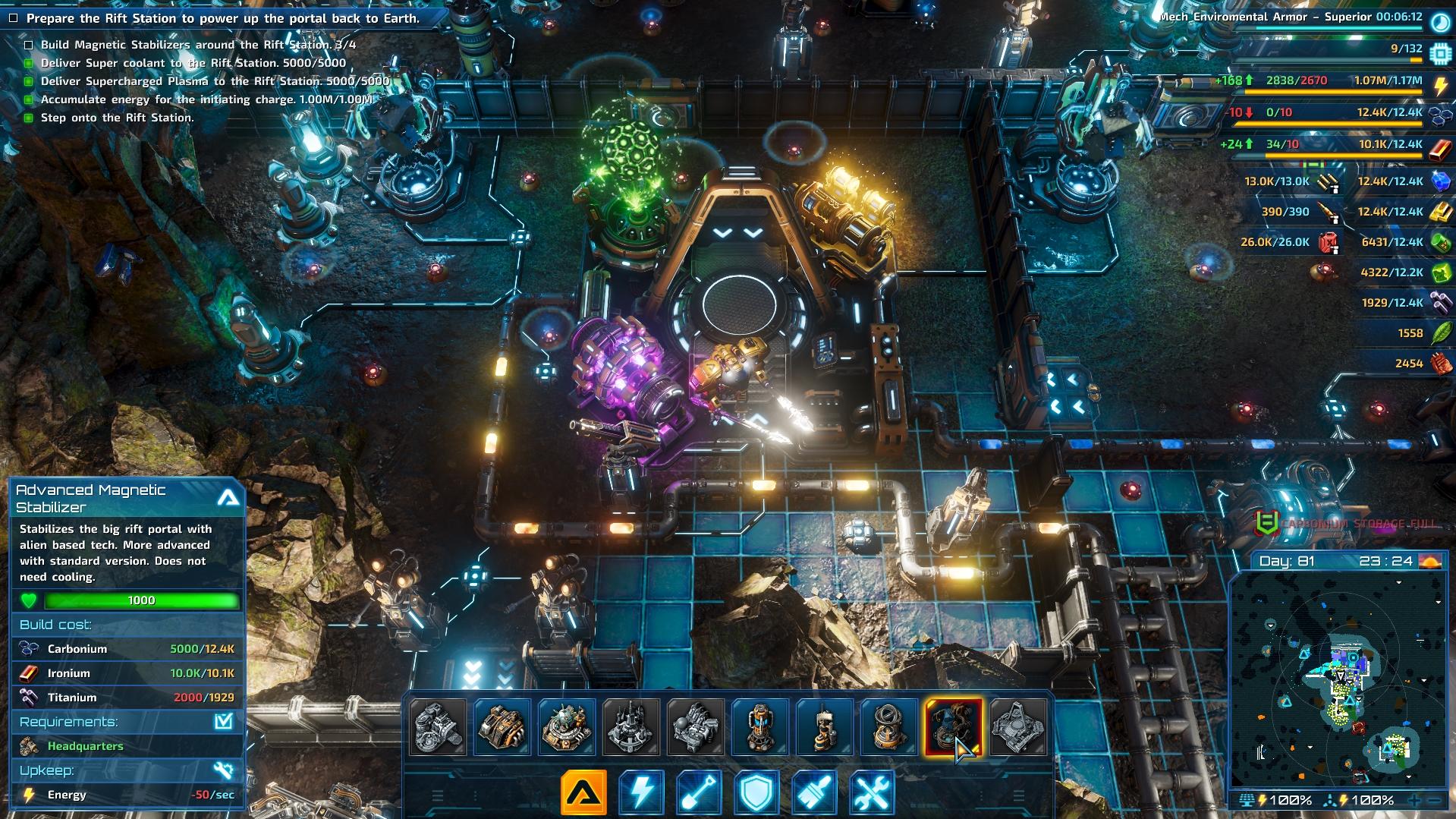 Advanced Magnetic Stabilizers are much more convenient to use if you have them researched.

This Riftbreaker objective isn’t too difficult to complete but it can be expensive. Also, it’s important to point out that there are two different types of Magnetic Stabilizer buildings. But, you’ll need to research further along the tech tree to get the advanced version. The first one is the Rift Magnetic Stabilizer that costs the following to build,

All you need to do is place four of these around the Rift Station to complete this objective. Try not to build them too close to it because this limits how close other ones can be. If you have the tech researched for the advanced version, this is what it requires instead, 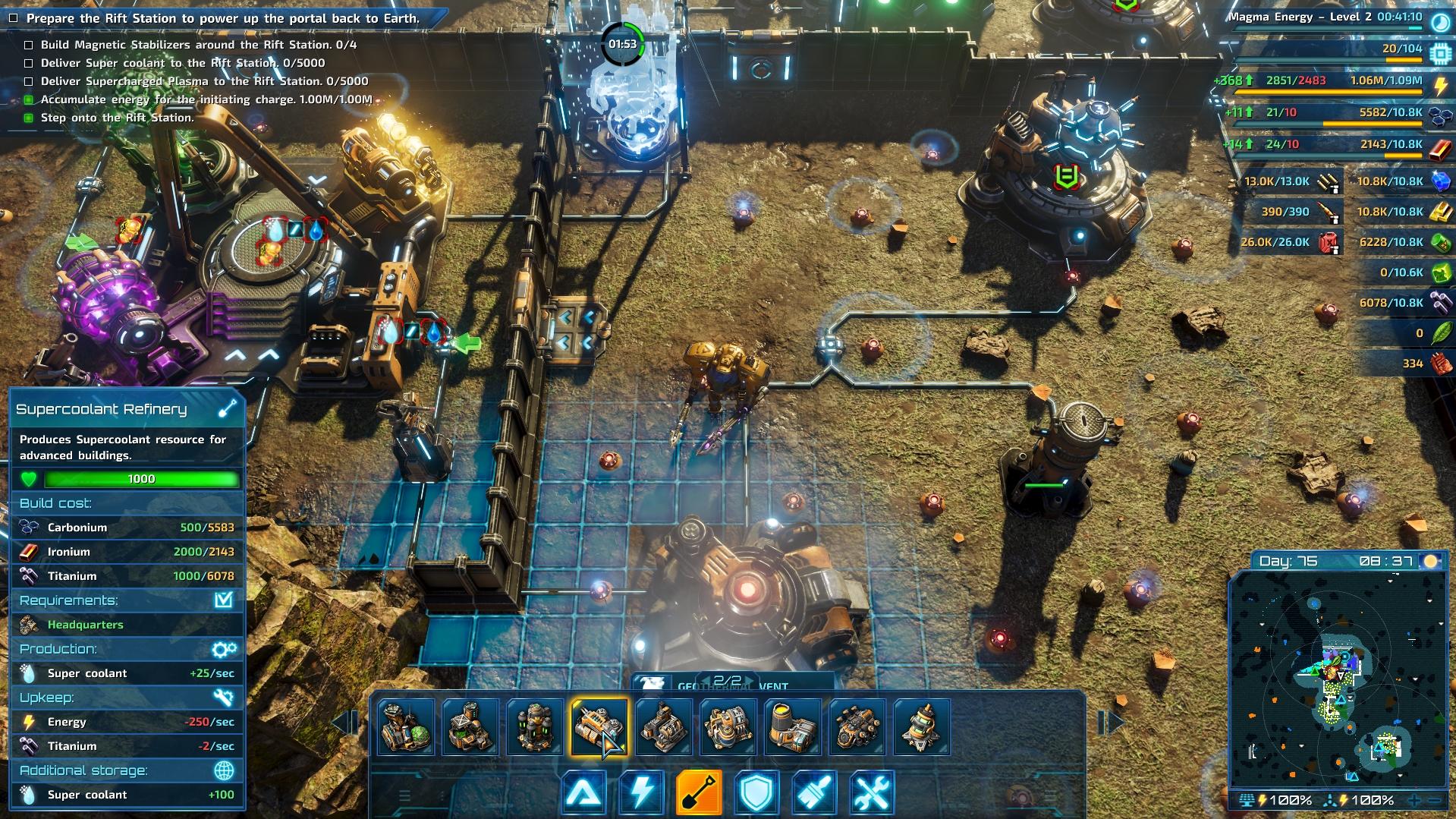 Make sure to store a good chunk of Super Coolant or have multiple refineries going so you don’t run out.

If you’re not sure how to get Super Coolant in The Riftbreaker, don’t worry. I had no idea where to start since I don’t recall Mr. Riggs ever talking about it. Fortunately, all you need to do is build a Supercoolant Refinery. This doesn’t even require a water source pipeline either.

As long as you can meet the simple upkeep requirements of 250 energy and 2 Titanium per second, you’re good. If you haven’t built a Titanium mining colony yet, you’ll definitely need one to complete this objective. Also, you can find the Supercoolant Refinery under the shovel building tab. Once you’ve started producing Super Coolant, you’ll need to connect it to the Rift Station via pipes.

Make sure you have several upgraded Liquid Material Storage containers full of Super Coolant. Otherwise, you run the risk of depleting your storage and the Rift Station will fail to charge up. This goes the same for Supercharged Plasma too. 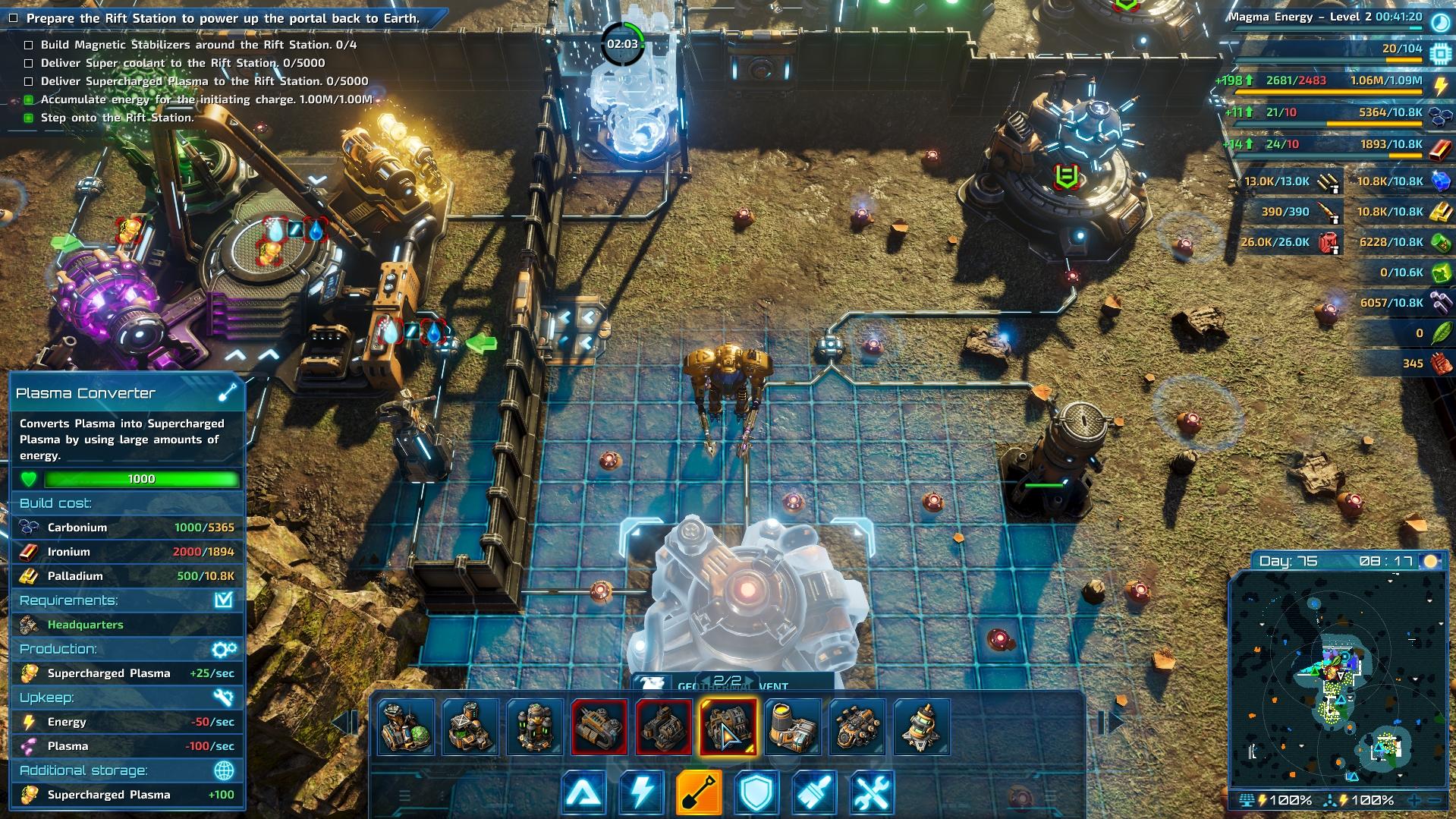 Supercharged Plasma can also be used for the Heavy Artillery Tower.

Learning how to get Supercharged Plasma in The Riftbreaker can be a tiny bit more complicated than Super Coolant. This is because it involves at least two buildings and potentially a third if you use that instead. First, you’ll need to build an Ionizer or Fusion Powerplant. This is because they both produce Plasma. Even though the Ionizer says it produces Supercharged Plasma, it doesn’t.

Afterward, I recommend connecting either building to a Liquid Material Storage container. As mentioned in the previous section, you should build a few upgraded containers so you don’t run out. The Rift Station will need more than 5k Supercharged Plasma even though the objective makes you think otherwise.

Now you’ll need to build a Plasma Converter and have a pipeline of Plasma connected to it. This will start producing Supercharged Plasma but you have to connect it to a Liquid Material Storage container. While you can connect it directly to the Rift Station, you’ll run out quicker than you can make it.

Meeting the 1 million energy needed isn’t too difficult. However, producing enough while the Rift Station is running can be tough.

Even though I covered it further up in this Riftbreaker guide, I wanted to touch on it again briefly. All you need to do for this objective is store 1 million energy so you’ll need a lot of Energy Storage buildings. Depending on how much you’ve researched, you can upgrade them to store more. Otherwise, be prepared to take up a lot of space building storage.

I recommend having at least 1.3 million so you have a little wiggle room for when problems come up. As long as you keep your energy source protected during the attack, you should be okay. This is why I recommend using Fusion Powerplants so you don’t need to protect as much. The only tough part can be having a water source nearby if you don’t already.

As previously mentioned, you’ll need to produce at least 10k energy for when the Rift Station is active. Otherwise, it will shut down and disrupt the 100-second timer. So make sure you take care of this before starting the process.

Step onto the Rift Station.

The first and simplest Riftbreaker objective for this mission is to step onto the Rift Station.

This is the simplest objective since you just have to step onto the Rift Station once every extension/addon is built. I’m going off memory, but I believe this leads into every other objective above. If you run into trouble with this one specifically, feel free to comment below and I’ll look into it further.

That’s all there is to this guide on how to use the Rift Station in The Riftbreaker. If you have any other questions, comment below for help. And I’ll try to help out if I can.

I'm not quite sure about the last step that should be the simplest. My portal is active, the rift gate seems to be opened, but nothing happens when I step inside. To be clear I try this on survival game mode with custom difficulty I survived whole 3h match time that I set and no its more like a sandbox. No time limit, but the waves keep coming anyway. At this point I can asume teleporting to another world/earth is impossible in this game mode. Let me know

Hey Ferdzor, I'm not sure if you figured it out already or not but I looked into this a bit more. Going off of what you said, I'm assuming you already powered and activated the Rift Station. In the campaign, the first time you step onto the rift station for that objective, it enables the other four.

But, since you're in Survival, it may handle differently. I'm not positive since I haven't tested the Survival mode. In the campaign, once you finish the timed objective, "Survive until the Rift Portal stabilizes 100/100", all you have to do is step onto the Rift Portal or wait for the alternate ending. So perhaps this doesn't work the same in Survival.