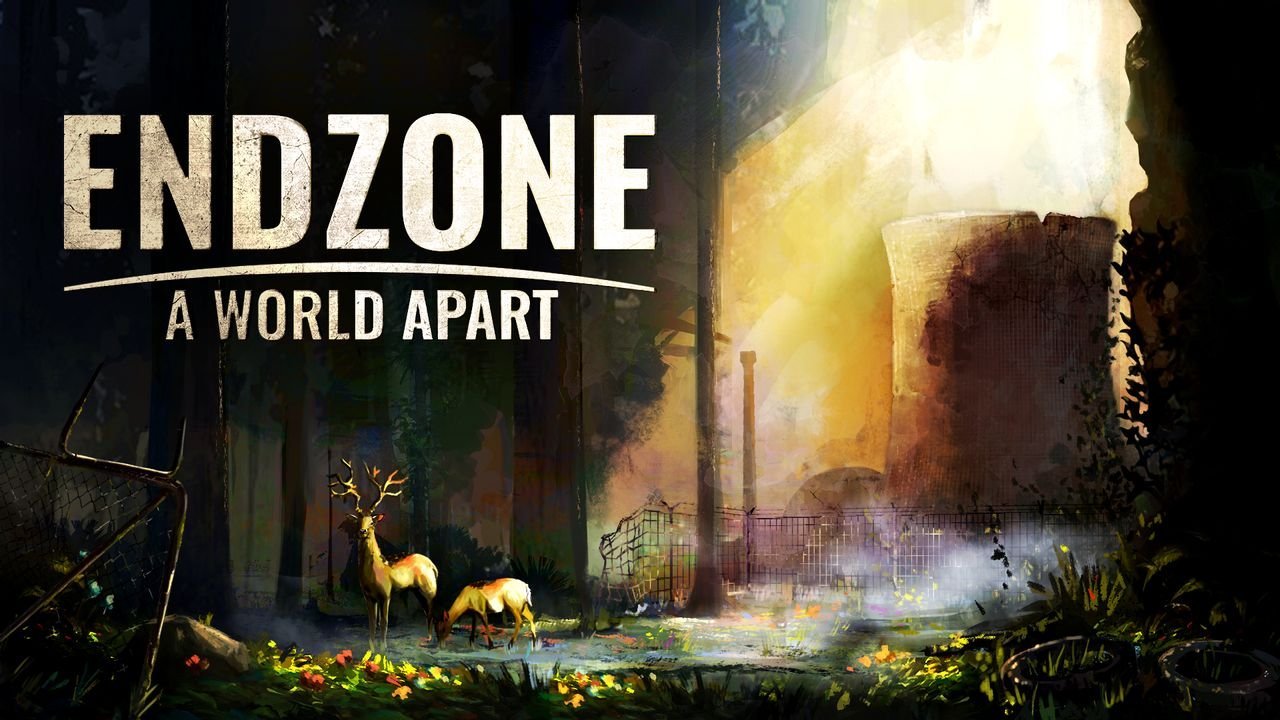 Endzone – A World Apart is a city builder that takes place 150 years after a nuclear disaster. It’s up to you to rebuild humanity in this post-apocalyptic wasteland while dealing with all sorts of problems. Worrying about food and thirst is one thing, but then you also have climate change and raiders to make life a pain. Find out if Endzone – A World Apart is worth it in our review below. 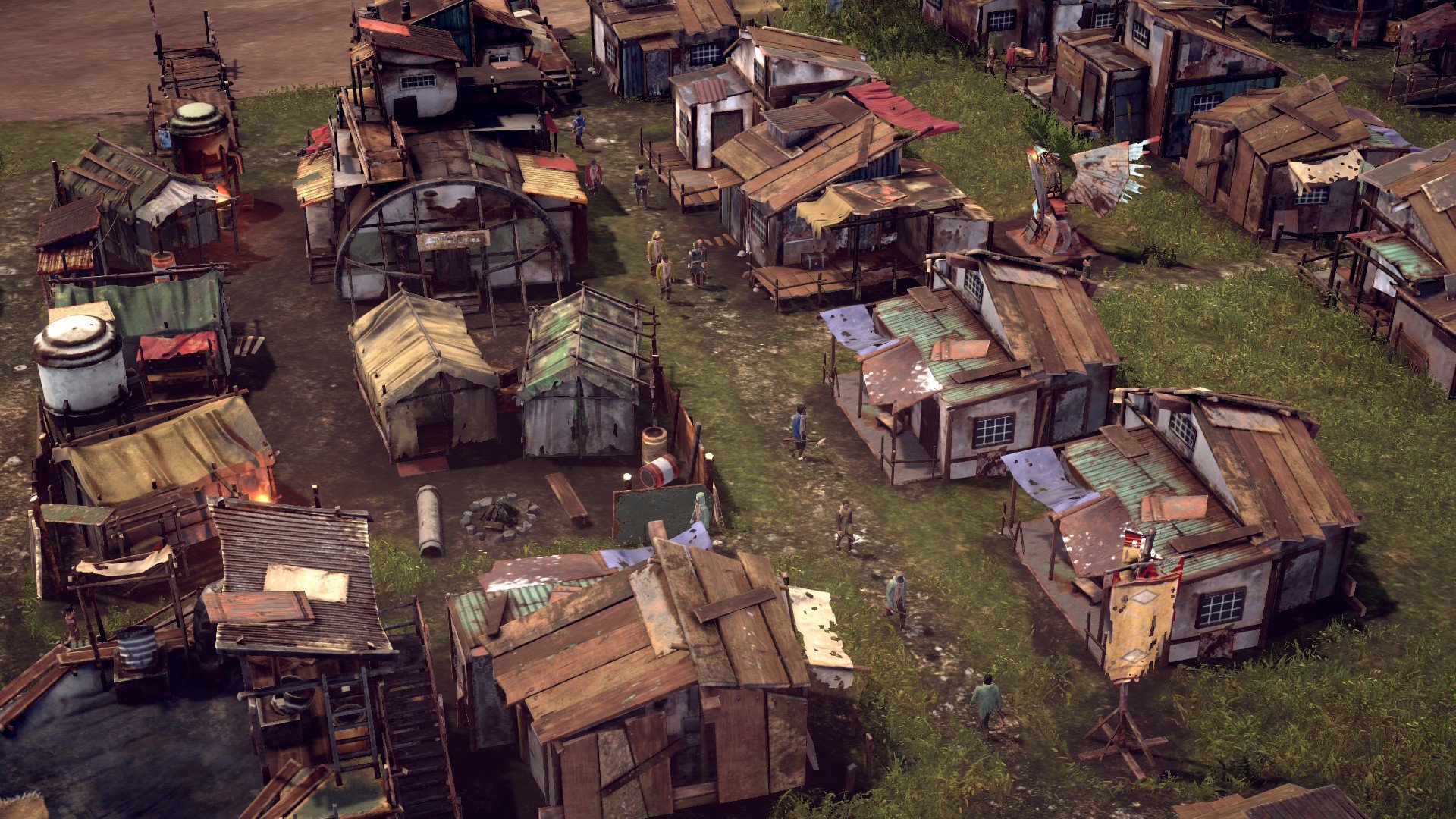 Developer Gentlymad Studios nails the post-apocalyptic vibe for Endzone. A group of settlers return to the surface after hiding away in vaults known as Endzones. Anything that previously remained is now abandoned and falling apart. You’ll need to gather up scrap and chop down trees to get your ramshackle settlement going. Prepare to sift through rubble looking for supplies as you revisit the Neolithic Era with a twist. 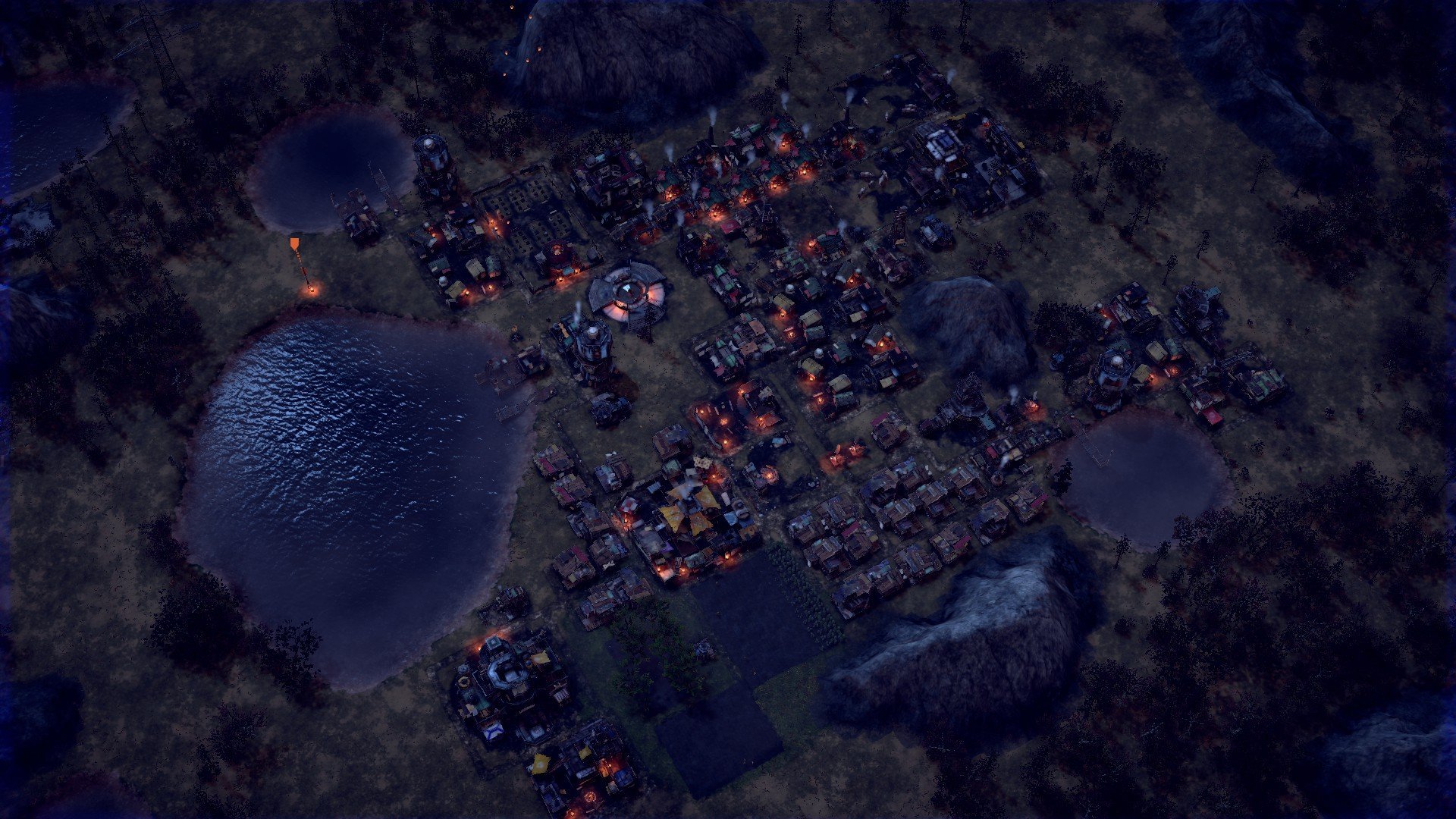 You’ll have a massive city before you know it.

Don’t be surprised if hours go by when you’re first learning how to survive in Endzone. You’re constantly trying to manage the many different resources your people need. This makes it easy to lose track of time when you’re jumping between goals. Right when you think everything is going well, a drought comes along to throw you off. The most challenging resource to manage, however, is your population. Anyone who plays city builders knows the growing pains your settlement goes through as it gets bigger. This is when it gets difficult balancing everyone’s needs across housing, food, water, and more.

3 – Variety of Challenges to Overcome 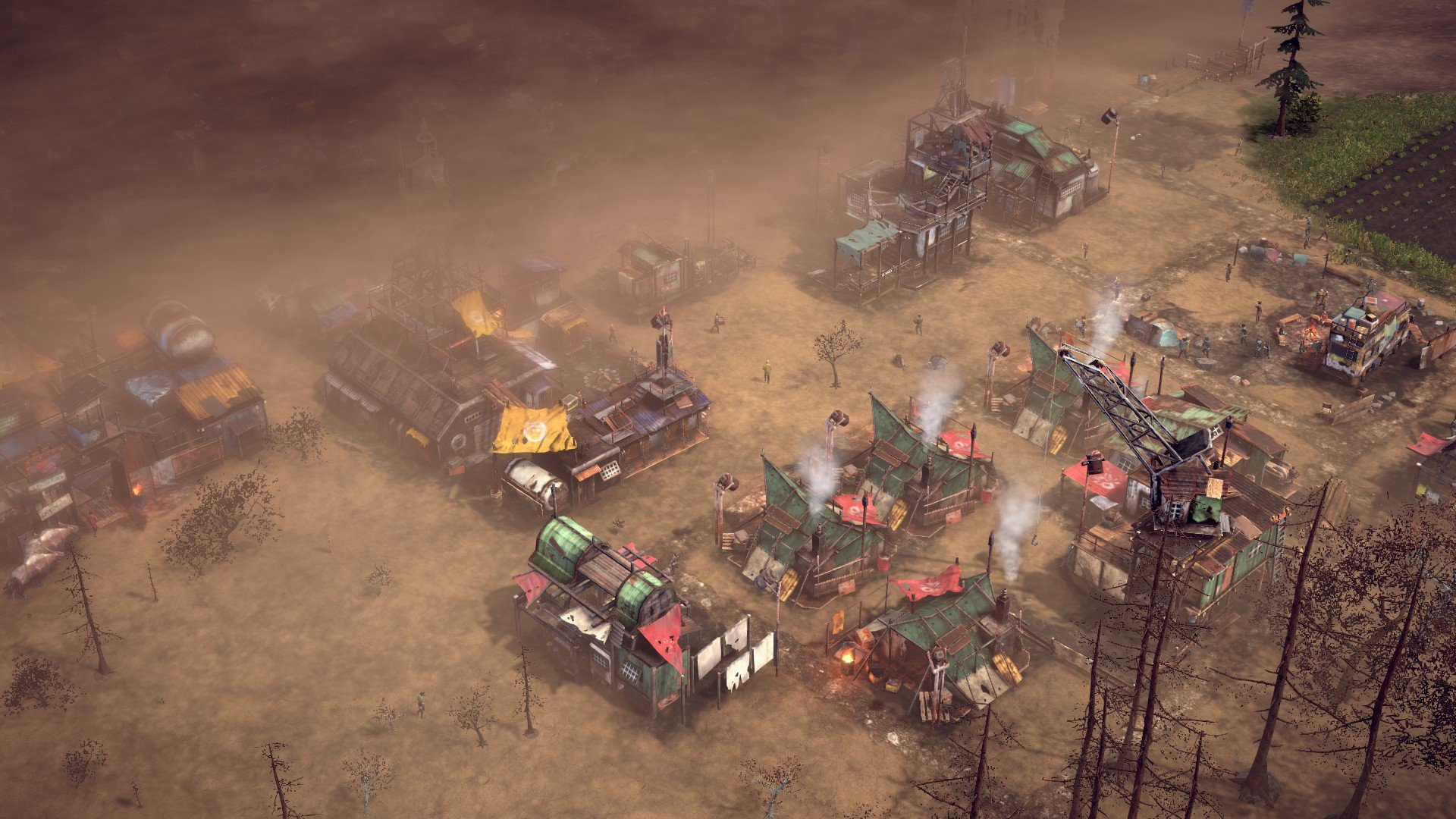 It wouldn’t be a post-apocalyptic world without food shortages and chaotic disasters. Learning how to keep your people alive while dealing with these challenges is always tough. Droughts and radiation will kick your butt until you know how to deal with them. There’s nothing worse than a pond drying up that you rely on for water. And then suddenly a raider demanding tribute simultaneously. Are you ready to give away everything or let your settlement be pillaged instead? While it doesn’t take long to get the hang of Endzone – A World Apart, it feels good when you start to. 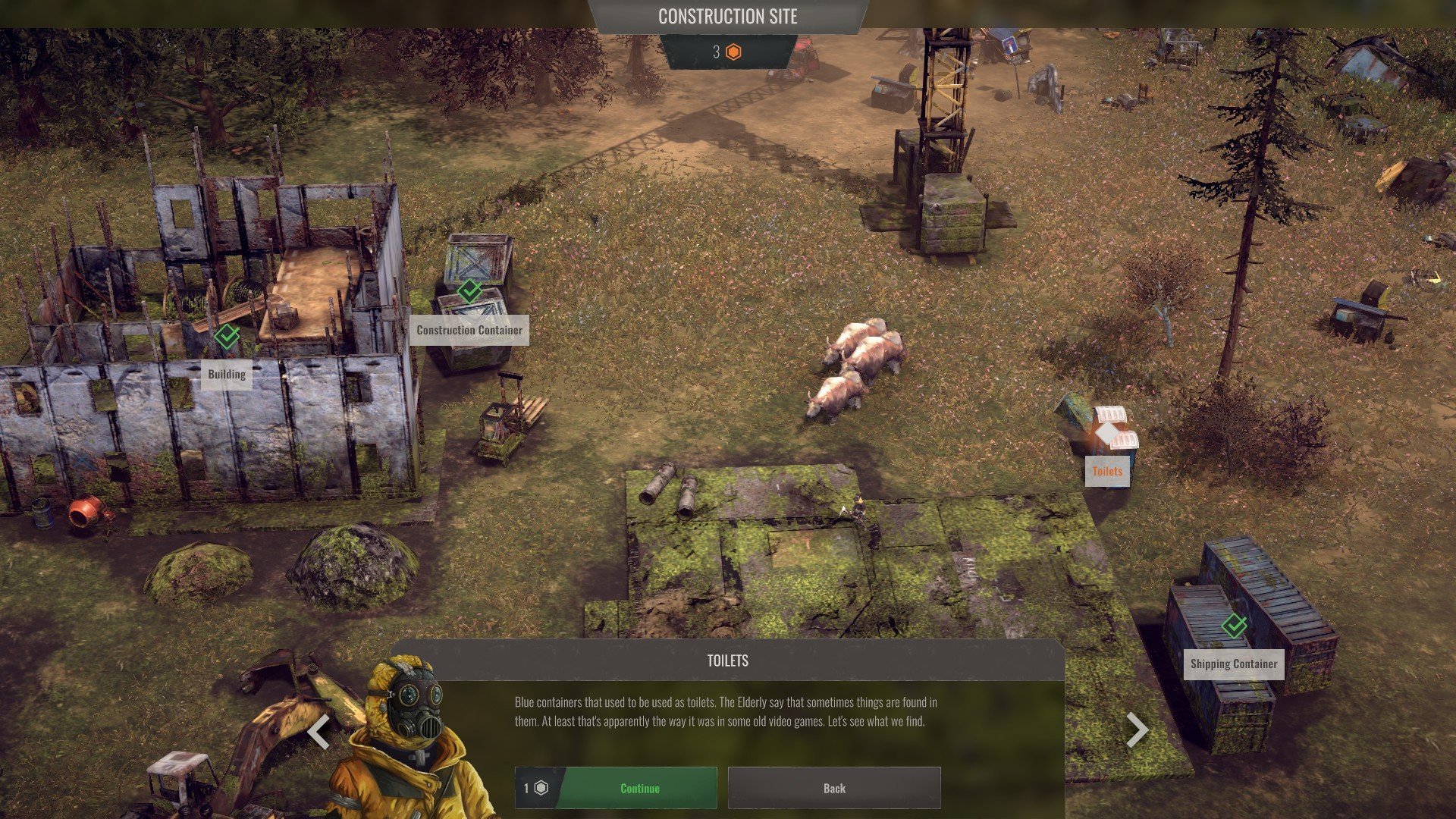 Expeditions are a great method for getting resources and important tools for research.

Once your settlement gets going, you can build an Expedition Station for exploring the world further. This is a neat system that revolves around sending out groups to search abandoned buildings. However, instead of simply marking a building, it’s a little more involved. You need to prepare them for the journey by putting together the right tools, radiation protection, and picking the right people. Then, when they finally arrive at the destination, you can search room by room looking for supplies. This leads to interesting dialogue from your settlers as they succeed and fail while exploring. 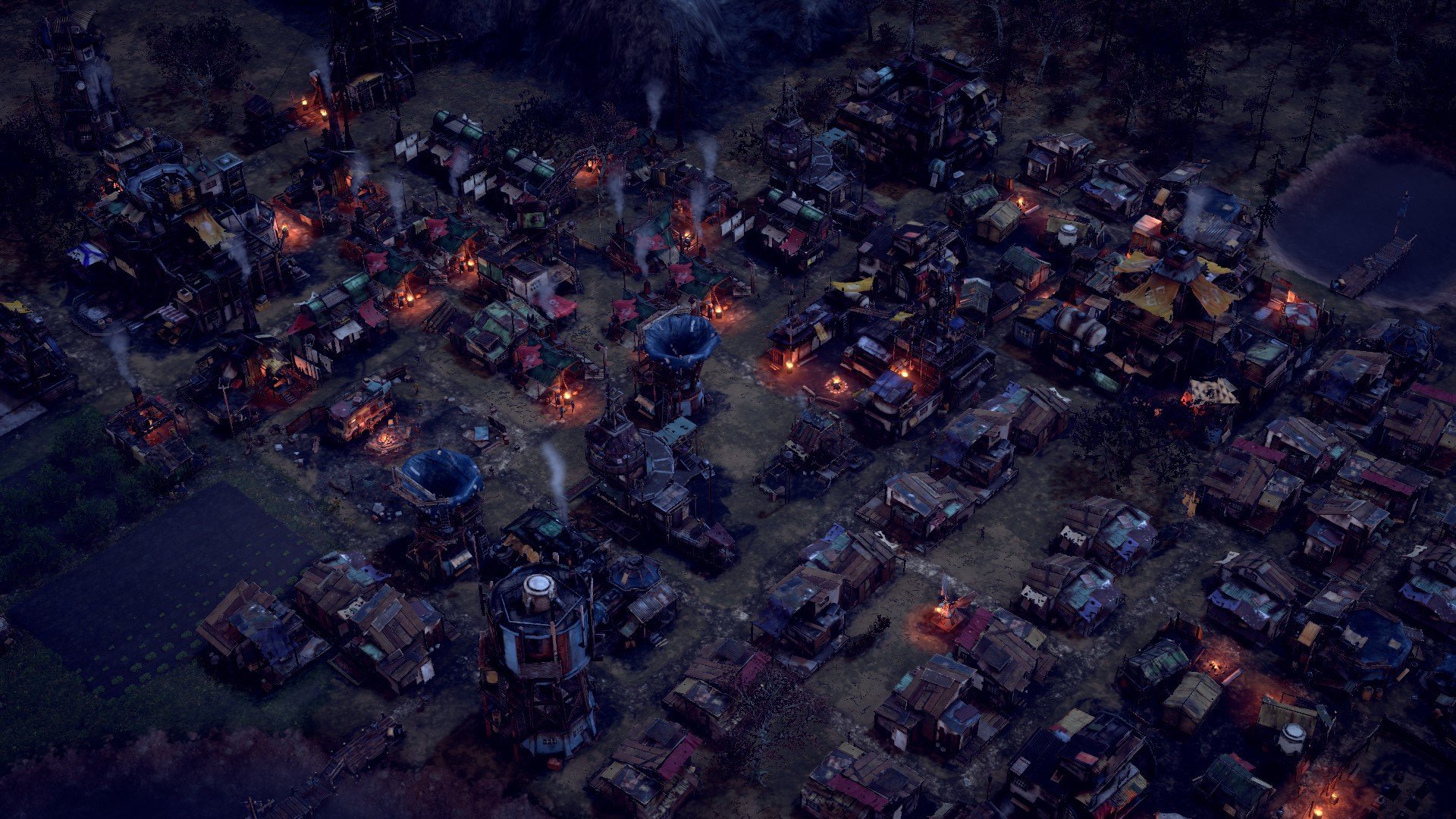 Needle in a haystack.

One of the issues with nailing the post-apocalyptic theme is that buildings look too similar. The dirty brown colors mixed with occasional green and red are so common, that it’s difficult to find what you’re looking for. This creates a hassle when you can’t easily differentiate buildings. While there are a few tricks, they’re all out-of-the-way methods. Fortunately, I later learned to place similar buildings near each other as a necessary evil. 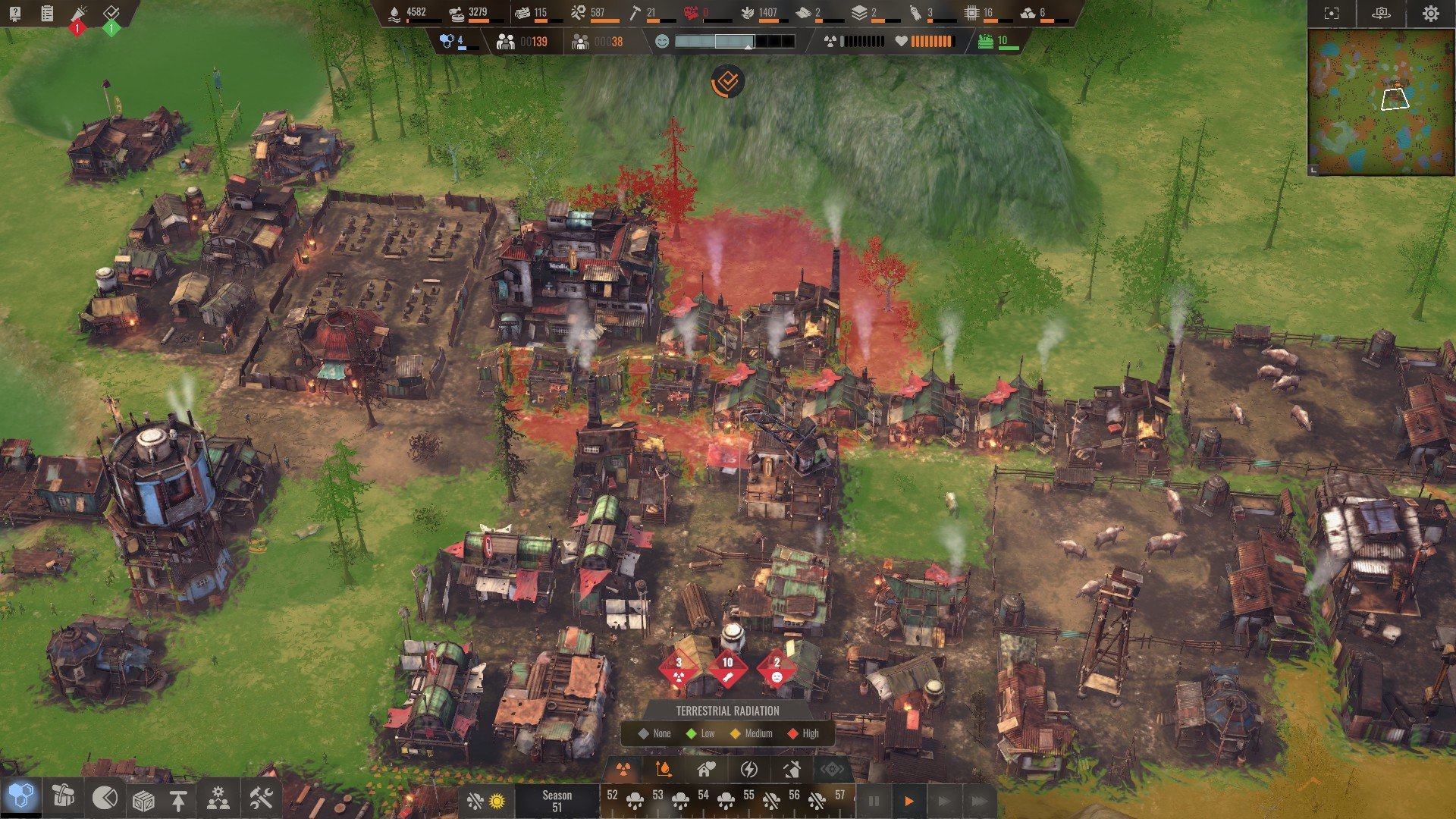 The radiation overlay shows the different levels of contamination from rain and other sources.

City builder games are complex and this is why it’s important to play the tutorial as mentioned in our tips and tricks guide. However, Endzone’s tutorial teaches you almost everything there is to know. It speeds through tedious parts, while still taking a few hours to complete. This almost ruins part of the experience when you have to start all over again. That aside, there’s a solid 20 or so hours of content before it gets repetitive.

Endzone – A World Apart becomes repetitive since you’re always focusing on the same struggles. It doesn’t matter if you’re starting a run or 10 hours into one. The gameplay doesn’t vary or have enough content for one run to feel different from another. Every time you play Endzone, you can follow the exact same strategy because not much changes. This is where it begins to feel a little shallow when you get a grasp on the game.

7 – Scenarios Slightly Change It Up 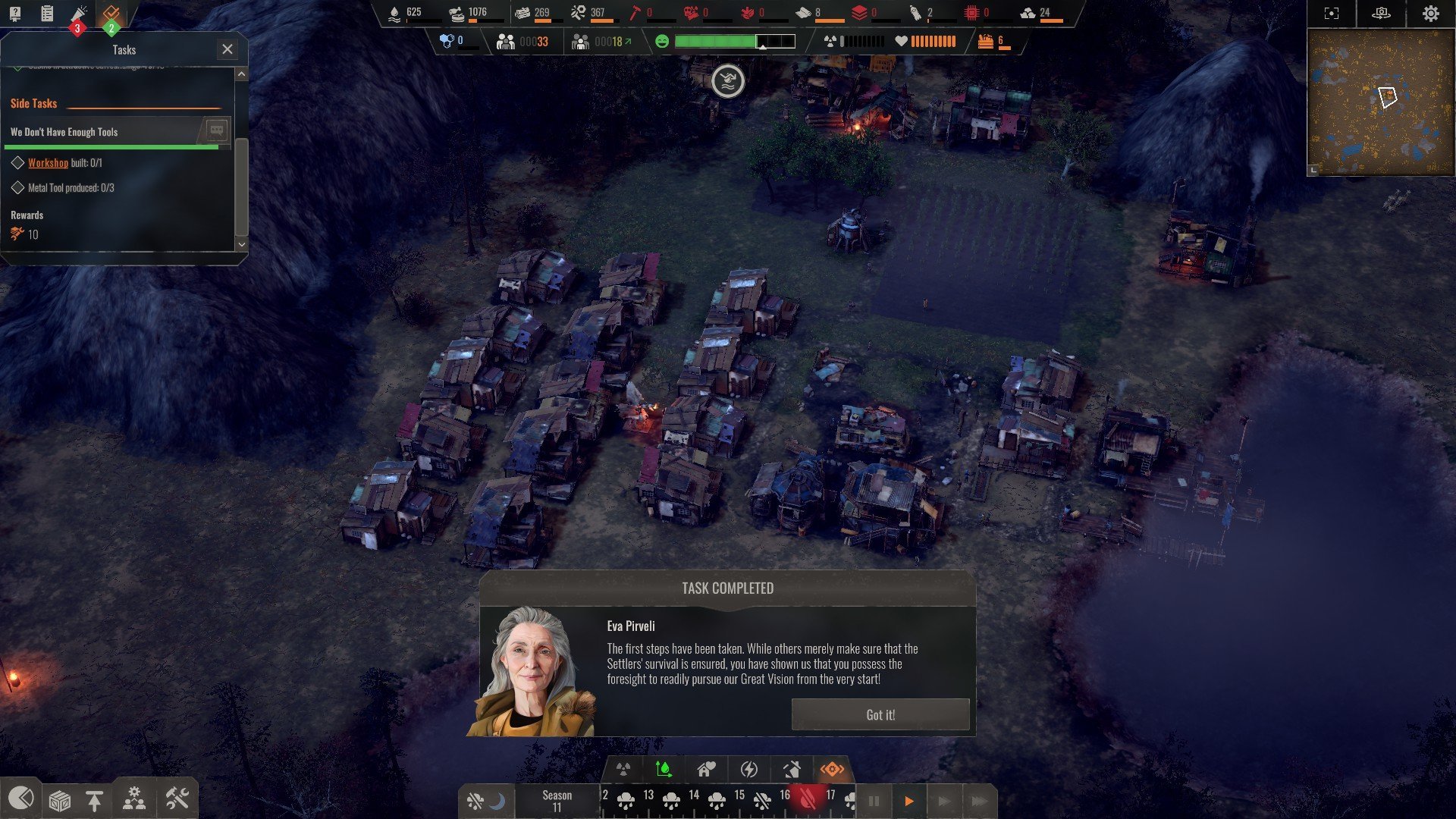 Character Eva Pirveli encourages you to keep building the settlement in this scenario.

Scenarios are a small attempt at offsetting the repetitive gameplay for some replay value. While I haven’t played all of them, they don’t change much. You may get a few goals to focus on, but it’s not any different from the sandbox mode. Several scenarios don’t put you in unique situations where surviving requires a different strategy. You simply have to survive really long or reach a high amount of people. These aren’t satisfying scenarios to challenge yourself. However, there are still a couple that are the exception with one having no source of water available.

8 – Decrees Are Essential For Survival 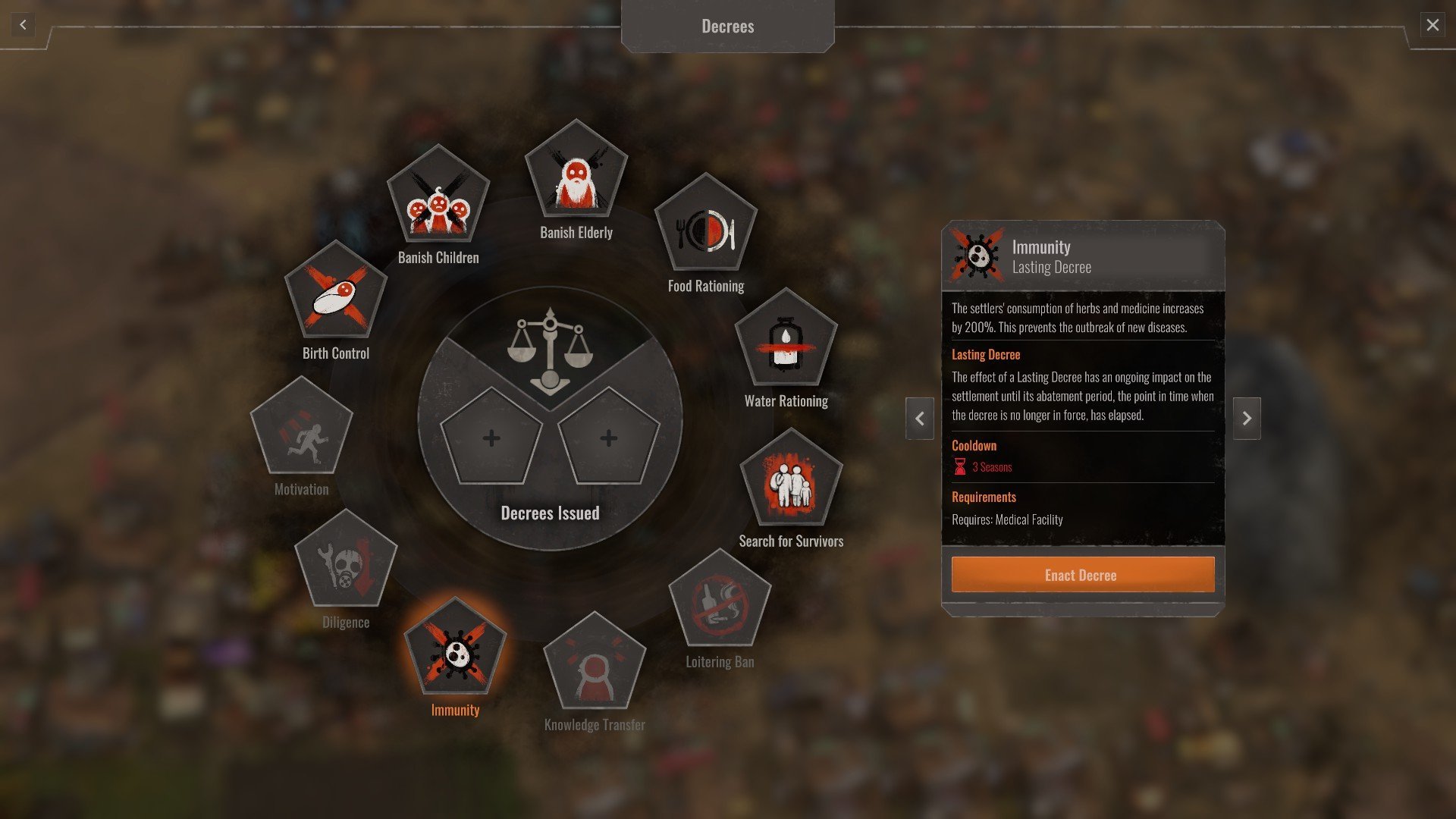 Decrees are a neat way to enforce rules such as rationing or doubling up on medicine. A common comparison is to the laws in Frostpunk where you’re making permanent colony changes. However, Decrees are temporary, which makes them less significant. It’s nowhere near as difficult of a decision when rationing water is only for a short time. That aside, Decrees make Endzone a little too easy at times because of how strong they are. Having epidemics back to back is never an issue when I can double medicine usage.

9 – Is Endzone – A World Apart Worth Buying? 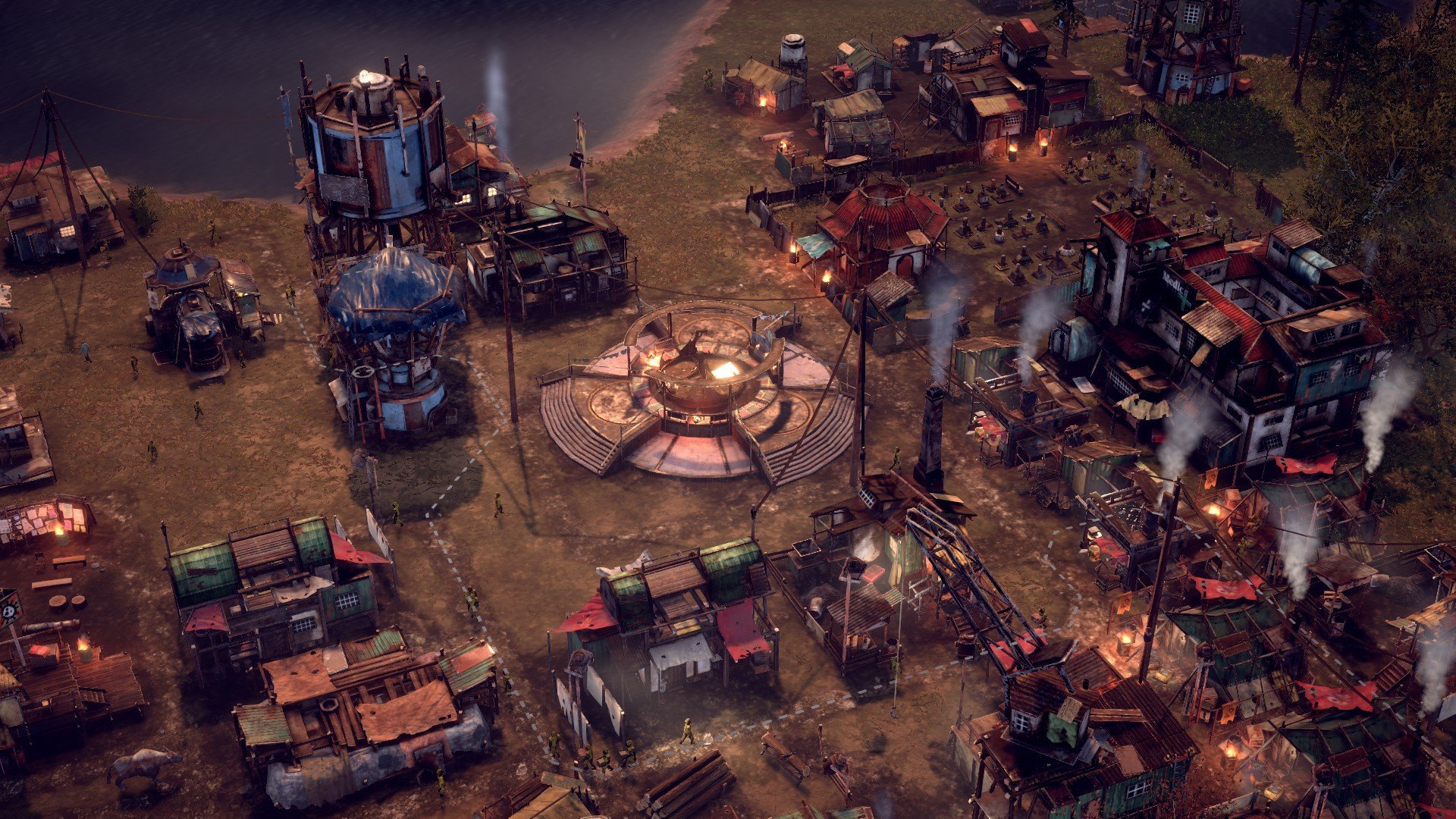 This leads us to the final question, is Endzone – A World Apart worth buying? If you’re a fan of city builders and the post-apocalyptic setting, you’ll enjoy it. However, don’t expect to put hundreds of hours into the game. The replay value isn’t there, but there’s enough content to enjoy before getting bored.

Endzone – A World Apart released on March 18, 2021, for PC. It was originally on Steam Early Access before releasing.

Endzone – A World Apart was provided by a PR agency via a Steam code.

Good review. I liked the game but felt it lacked a strong end game. It should have let you keep advancing the tech and eventuality become post-post-apocalyptic.

Agreed, I feel like it gets a little repetitive even before reaching end game. But, without any other goals to focus on, all you can do is raise your population. You easily run out of content. At that point, you can switch to scenarios, but it seems too similar to running a sandbox. Aside from certain ones mentioned in the review. Thanks for the comment Greg.