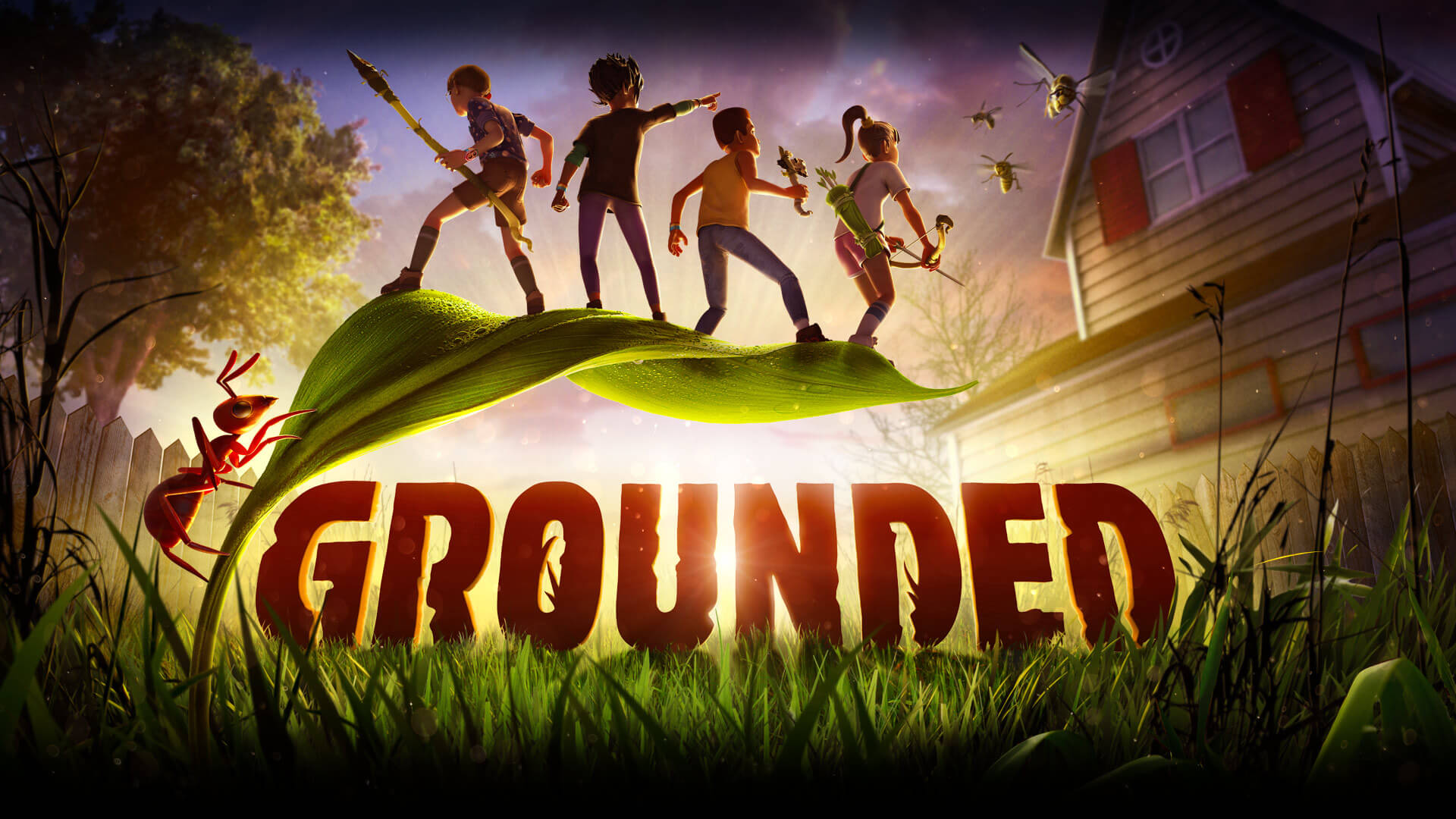 Get your questions answered with our guide on the dangerous jungle that is the Grounded universe. The Table of Contents below is clickable for each question you may have. Before jumping in, know that the only question with minor spoilers is the “What is Weakening the Laser” bit. Otherwise, if you have any extra questions, be sure to let us know in the comments below.

How to Invite Friends in Grounded

If you’re not sure how to invite friends to your online server in Grounded, it’s not too difficult. Unfortunately, at this time, there’s no in-game way to invite others to your server aside from having them join you instead. The process to play with friends after hosting an online server is to make sure you’re both added as friends on your platform of choice.

Then, the person trying to join will need to go from the Main Menu to the Multiplayer tab to “Join Online Game”. Servers hosted by friends will appear here. The server browser currently states that upcoming features include game invites, global game search, and session settings. This will likely make it easier to play with others and have even more customization.

How Many Players Can Play Together

Up to four players can play together in a Grounded server. I’d be surprised if this gets increased at a later time, but it is currently in Early Access/Game preview and anything can happen.

How to Get Your First Axe

Before you can craft your first axe, you’ll need to gather Sprigs and Pebblets, then analyze a Pebblet at the nearby Field Station. There will be one near the beginning with a landmark telling you where it is. If you’ve lost track of it, you can use the map to find it again. Once you’ve analyzed a Pebblet, you’ll get the Pebblet Axe recipe.

Then, you can craft it using a Sprig, Pebblet, and Crude Rope. Before you can get Crude Rope, you’ll want to read the next tip below. This was originally named Woven Fiber.

How to Get Woven Fiber/Crude Rope

A Grounded update changed the Woven Fiber recipe to Crude Rope. You can still craft it the same way by using the Analyzer to scan Plant Fiber. This reveals the Crude Rope recipe which requires Plant Fiber to craft.

Two great ways to gather Plant Fiber include gathering it off the floor and chopping the grass blade stems. This is the short part sticking out of the ground after cutting a blade of grass. However, this will prevent the blade of grass from coming back.

What is Weakening the Laser?

The first story mission you’ll run into in Grounded is The Mysterious Machine. Once you turn it on, there are two lasers not making it to the machine for some odd reason. This is for you to find out by following the laser to see what’s not right. If you’re still not sure, here are the two fixes for each laser.

As shown in the screenshot above, the first laser you’ll want to fix is the one nearby blocked by a blade of grass. Simply craft an axe and chop down that blade of grass so the laser is no longer blocked.

For the second weakened laser, you’ll have to wander over to it and kill a bunch of Lawn Mites chewing on the wires. There will be a few Lawn Mites above the surface and many underneath. You might want to make a torch since it’s dark in the narrow cavern underneath.

If you get to the end of the cavern and have to break a wall, don’t worry, there aren’t any Lawn Mites back there chewing on the wire/cable. If you’re still curious about how to break through that wall, head over to our tip on How to Break Rocks/Quartzite.

How to Make a Workbench

As you may have learned from previous tips in this article, you can use the analyzer to find new recipes like the Workbench. In order to make a Workbench in Grounded, you’ll need to chop a blade of grass to get Grass Planks and then analyze that at the Analyzer. As shown in the screenshot above, as long as you’re holding the Grass Plank when you use the Analyzer, it will show under the Hauling area. Click this and analyze it to gain the Workbench recipe.

How to Get Sap

Sap is extremely important because it’s used in many early recipes as well as for making Fiber Bandages to heal yourself. If you’re struggling to find Sap, there are two main ways to get it with one method being more common. You’ll want to keep an eye out for fallen twigs or branches that have drops of sap on them. A twig will often have a few drops of sap that you can collect.

The other method for getting Sap is to use a hammer on a Sap Clump that you can find hanging low in certain areas. You probably won’t come across Sap Clumps in the starting area. And fair warning, if you find one, you might be near danger.

How to Get Water

Getting water in Grounded should be one of your first goals as you definitely don’t want to die of thirst. Fortunately, the game quickly will give you a tip directing you to droplets of water you can drink. However, they’re often on a blade of grass high above you and you can’t always reach them. There’s a neat trick where you can hit the grass blade with your fists or an axe and it will drop to the ground. Just be careful, they’re slippery and will bounce around.

Before you can break rocks also known as Quartz for materials, you’ll need a Pebblet Hammer. If you already know how to make a Pebblet Axe, you should be able to make a hammer. Otherwise, make sure to analyze a Pebblet to learn the recipe. Once you’ve made a hammer, simply equip it in your hotkey bar and whack away at a Quartz rock if it gives you the prompt to do so. Eventually, it will break into a bunch of Quartz pebbles for you to grab.

How Fast is Time in Grounded

Time moves quickly in the world of Grounded which is important to know because you’ll lose daylight for exploring and also it contributes to the Analyzer battery. Take a look below for an idea of how quickly time passes.

How to Get Spider Silk 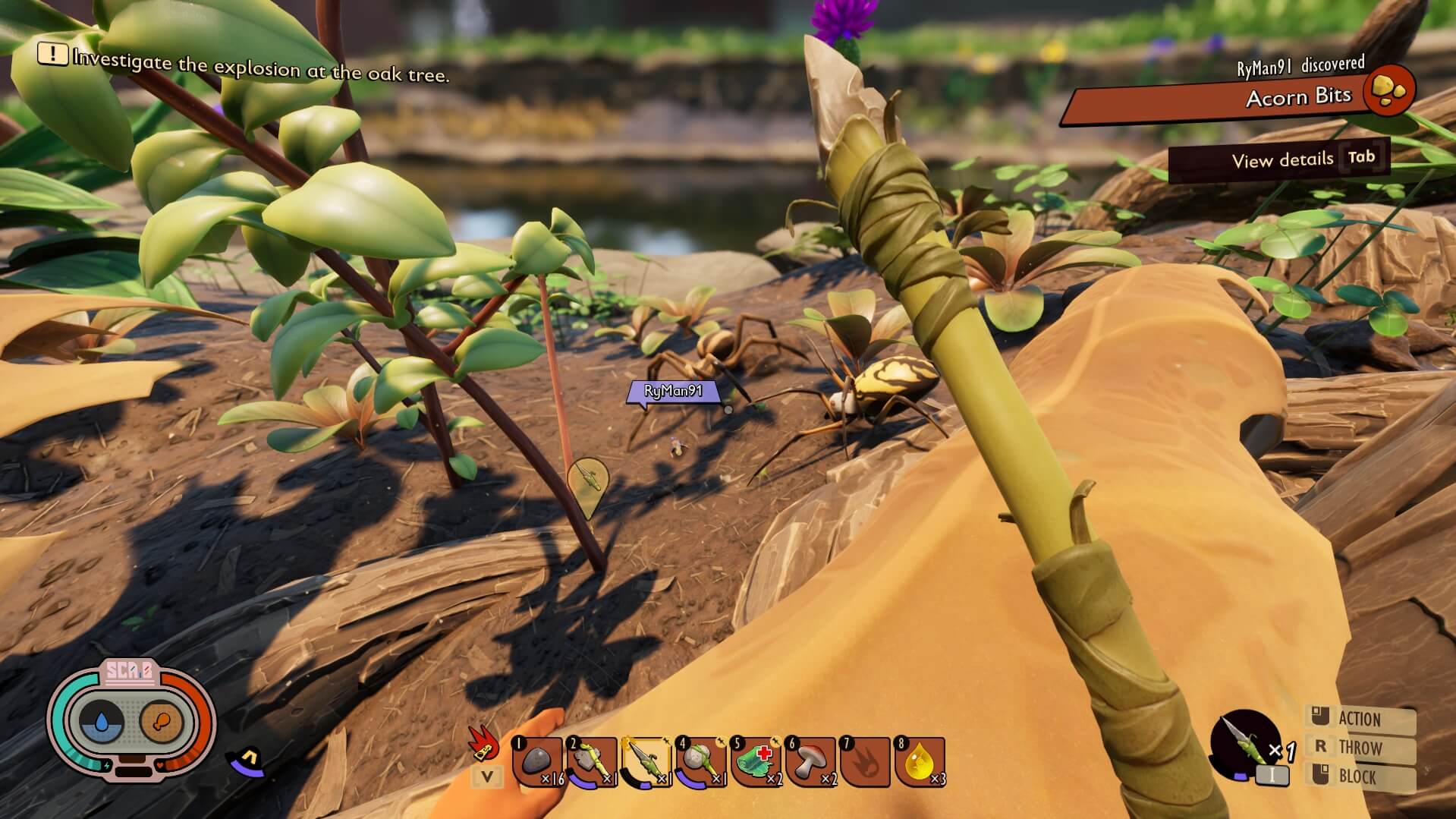 If you need Spider Silk for a recipe, you can get it from two different ways. First, you can gather it from spider webs by attacking them with an axe or your hands. Just be careful of spiders nearby as they’re extremely tough and one-hit you if you’re not wearing armor.

Try not to get too close to a web as you’ll get stuck in it. The only way to get out seems to be breaking with. Your other option for getting Spider Silk is going right to the source and killing spiders. With that said, most recipes now require Spider Rope. You can make this by refining Spider Silk at a Spinning Wheel.

How to Get Weed Stems

You can get Weed Stems by chopping down a Dandelion with your axe. It will drop several Weed Stems similar to how blades of grass drop a few Grass Planks. You’ll have to haul them in your hands instead of carrying them in your inventory. By default, players can carry up to five Weed Stems unless they have the set bonus from ant armor which allows carrying up to eight.

If you have tier 2 tools, you can chop Husky Weeds for even more. This is definitely the better option, but not everyone will have a tier 2 axe yet. Especially if you’re trying to make a Spinning Wheel.

How to Get Grub Hides

If you’re trying to get Grub Hides in Grounded, you’ll need to keep an eye out for grubs tunneling beneath your feet. They’ll kick up some dirt creating a moving trail while they’re moving about. You can get them out of the ground by hitting their trail with an Acorn Shovel.

They won’t attack you after popping up, but you’ll still have to kill them to get the Grub Hides. I haven’t found a good source of them yet after exploring for a while searching. If you do, be sure to let me know in the comments below, because I’d love to know too!

Can You Kill the Bird/Crow?

The August content update for Grounded introduced a massive bird/crow that some players are wondering if you can kill. Unfortunately at this time, there’s no way to kill the bird even if you manage to hit it up close. The bird did however arrive with feathers and some new recipes in the August update. The patch notes for Update 0.2.0 are available here.

Can You Kill the Koi Fish? 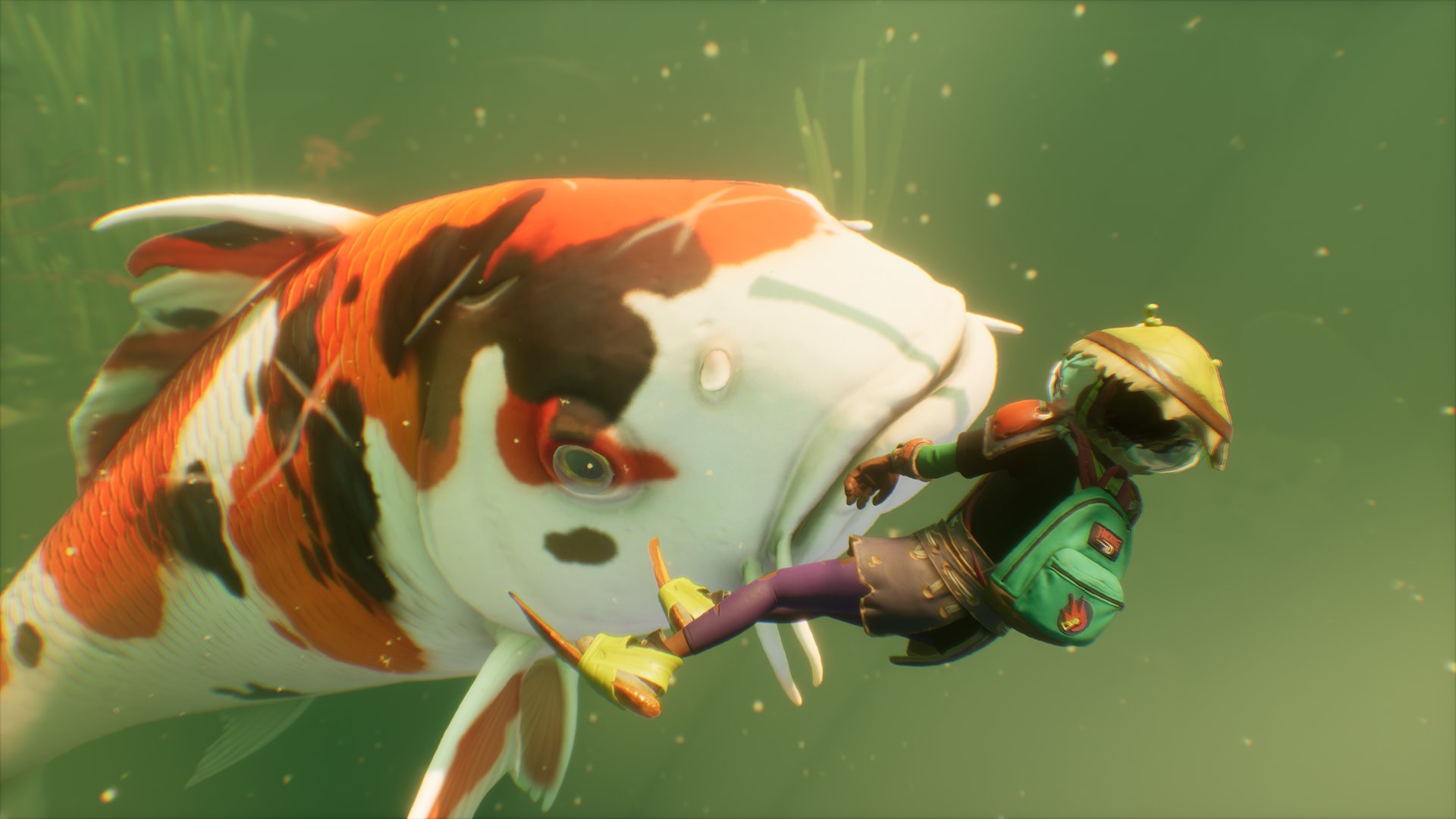 The Koi Pond update added a whole new underwater region for Grounded where there’s a giant Koi Fish boss. If you’re wondering whether or not you can kill the Koi Fish, it doesn’t appear so right now. This will likely change, but as of right now, the Koi Fish doesn’t have a health bar when attacked. If it turns out there’s a way to kill it, be sure to let us and others know in the comments below. We’ll update our answer here if this ever changes.