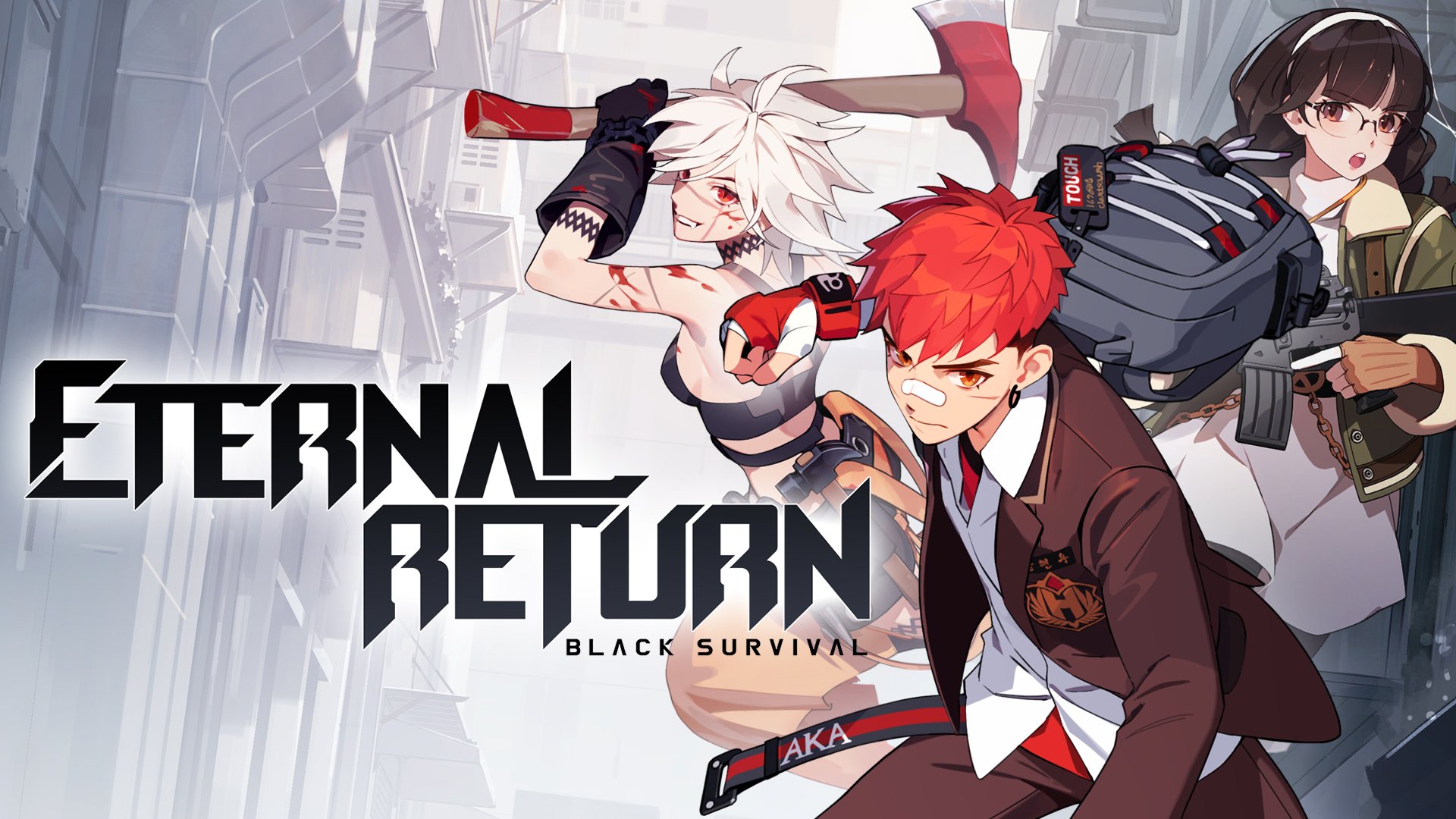 If you’re looking for some Eternal Return: Black Survival tips and tricks, we’ve got you covered. This battle royale has a MOBA vibe with survival mechanics that revolve around crafting your own gear. If you plan on surviving against 17 other players, you’ll need to learn a few things before going in. Read our tips and tricks below for a mixture of beginner and advanced ones. 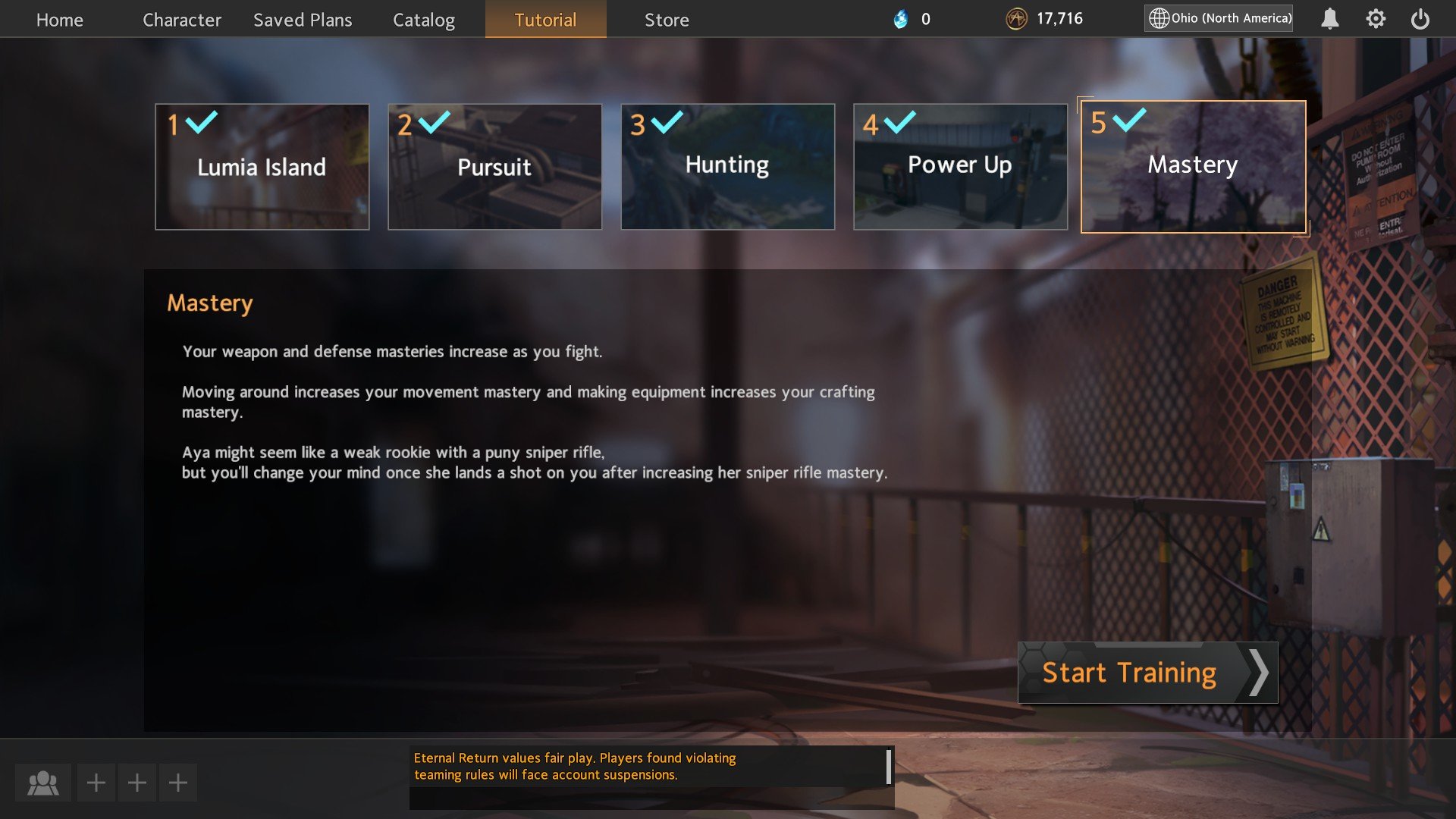 When you first launch Eternal Return: Black Survival, you’ll have to complete a tutorial mission. Then, you can immediately hop into a match with some players. However, you should complete all five tutorial missions so you have a better idea of how the game works. It’s definitely a little confusing at first and you’re likely to not know what you’re doing, otherwise. Here’s a quick rundown of what each tutorial covers.

Once you’re finished with the tutorial, you can either hop into a match online with players or against AI only. Fortunately, there are three different difficulties for going against AI. This is a good opportunity to test builds and learn more about Eternal Return: Black Survival if you’re not confident yet. 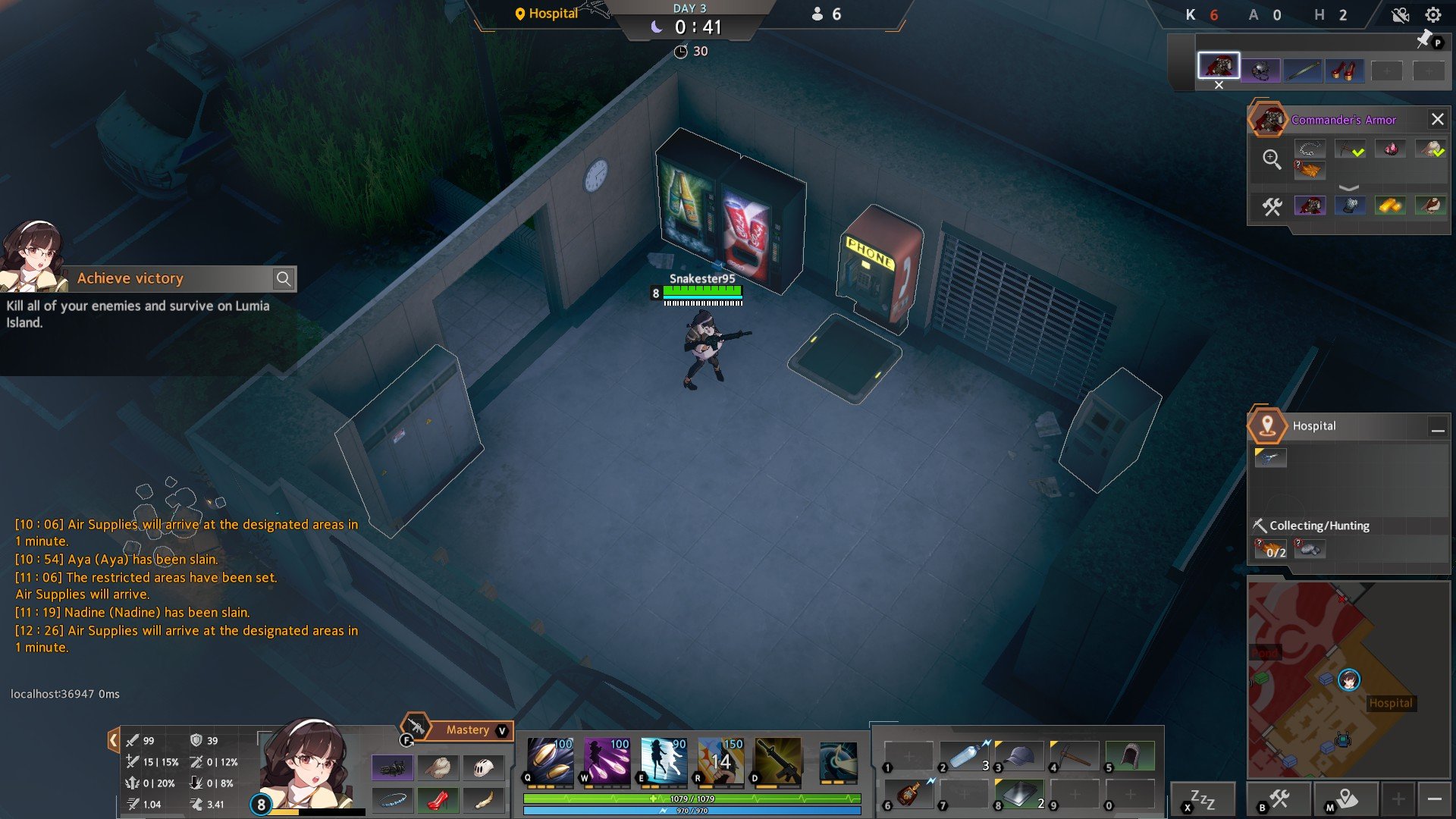 You can teleport around the map using phone booths known as Hyperloops. While there isn’t a Hyperloop station in every zone, you can use them to teleport to any zone. This is a great way to reach a far area that maybe has an item you need or a way to simply escape. These take about four seconds to use, so be careful of getting interrupted by an enemy. Also, they’re visible on the map as a symbol with two blue arrows. 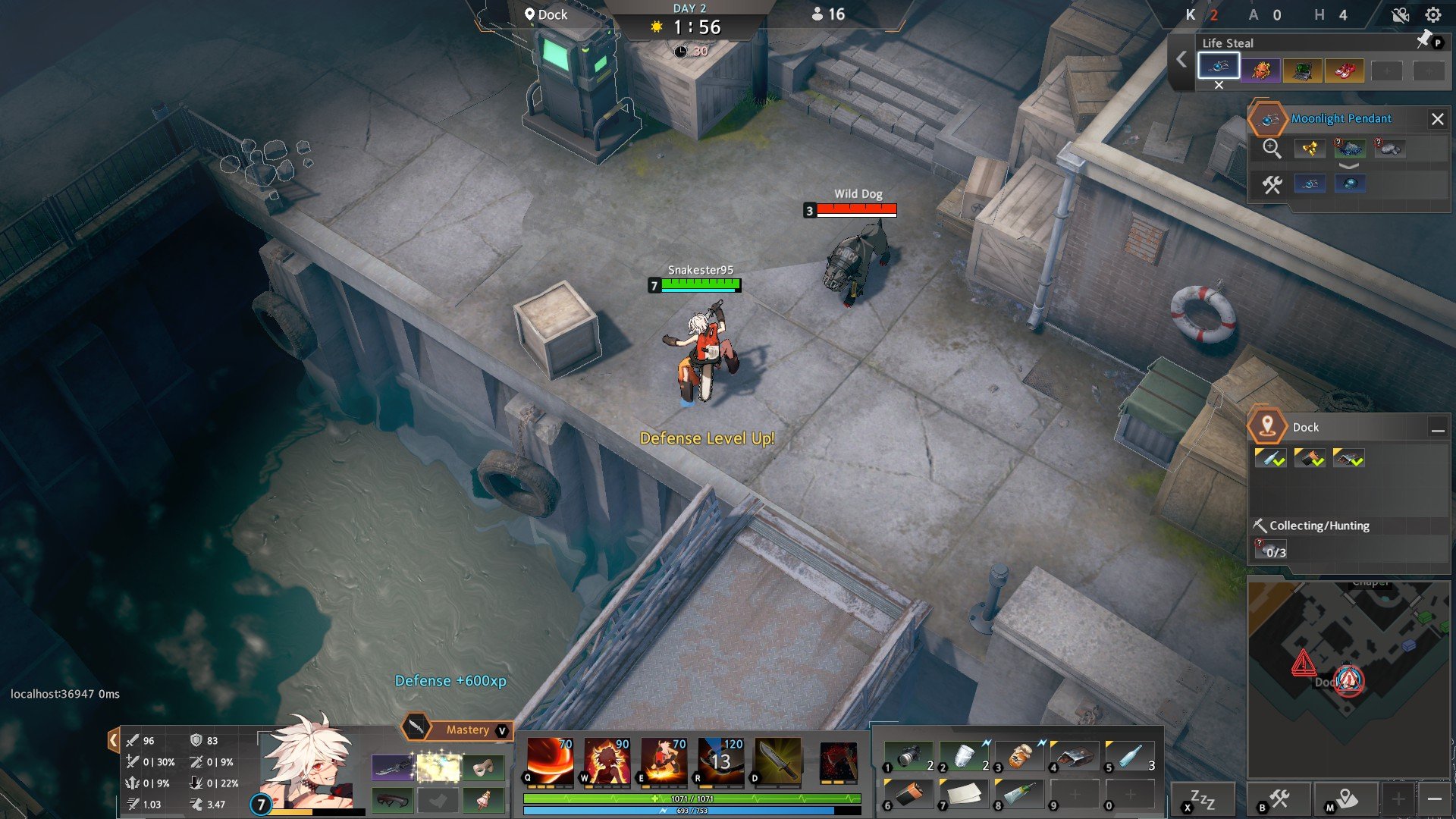 The mini-map is one of the most powerful parts of your UI in Eternal Return: Black Survival. It shows you nearby regions, what’s restricted, what’s about to become restricted, and most of all, alerts. If you see a red triangle with an exclamation point appear on the map, that means someone is there. They may be looting a container, crafting an item, fighting another player or animal, etc. There are a number of actions that create a sound loud enough that nearby players can see you on the map. You can take advantage of these alerts to find players or avoid them if you prefer. 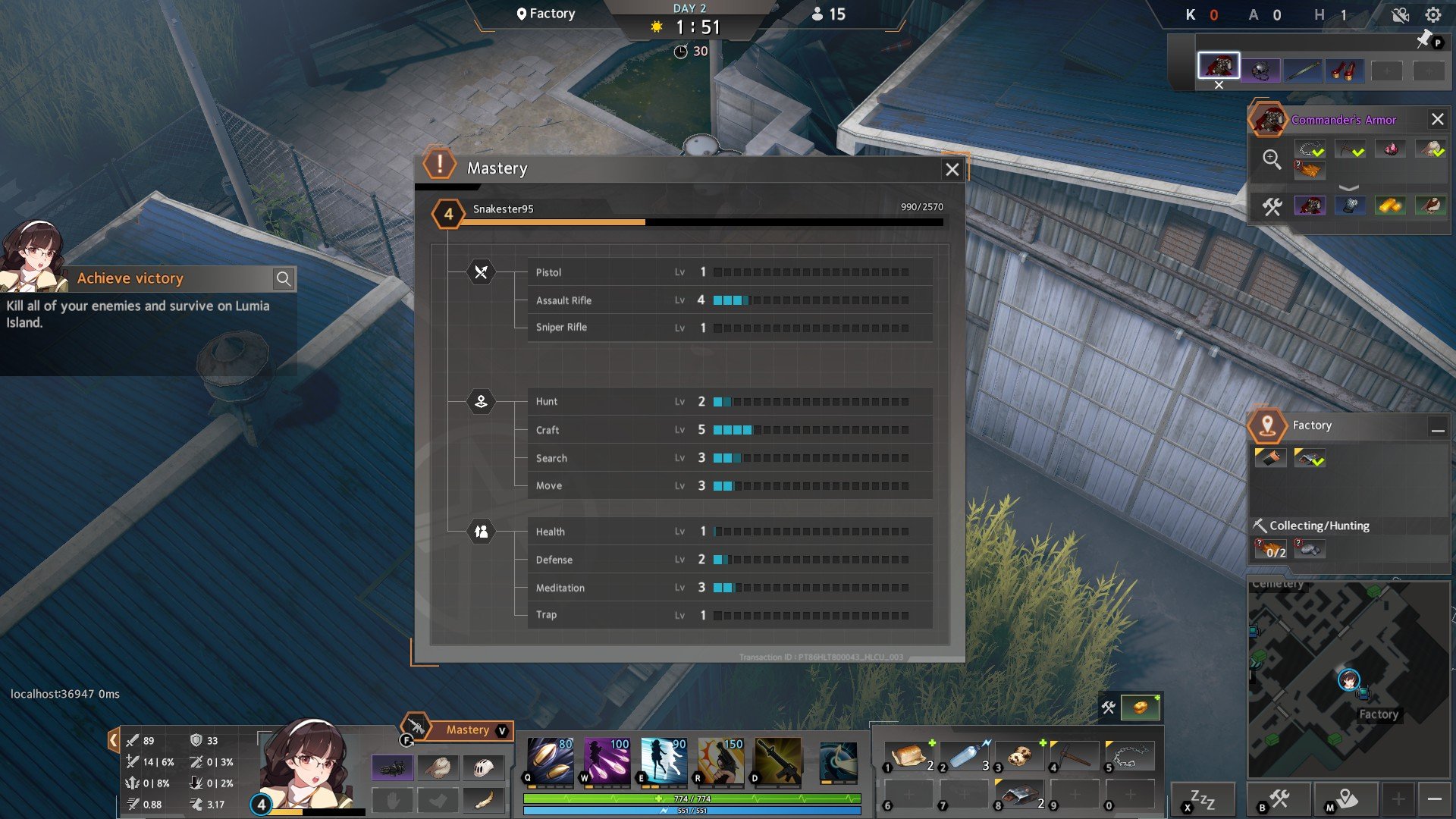 Mastery levels play a significant role in how your character develops through a match in Eternal Return: Black Survival. Whether it’s increasing your max health or gaining extra damage on your attacks. Every mastery level requires certain activity to gain experience and I’ve created a full table below to help you understand it. Also, until you reach level 7 for your weapon, you won’t be able to use your weapon ability. 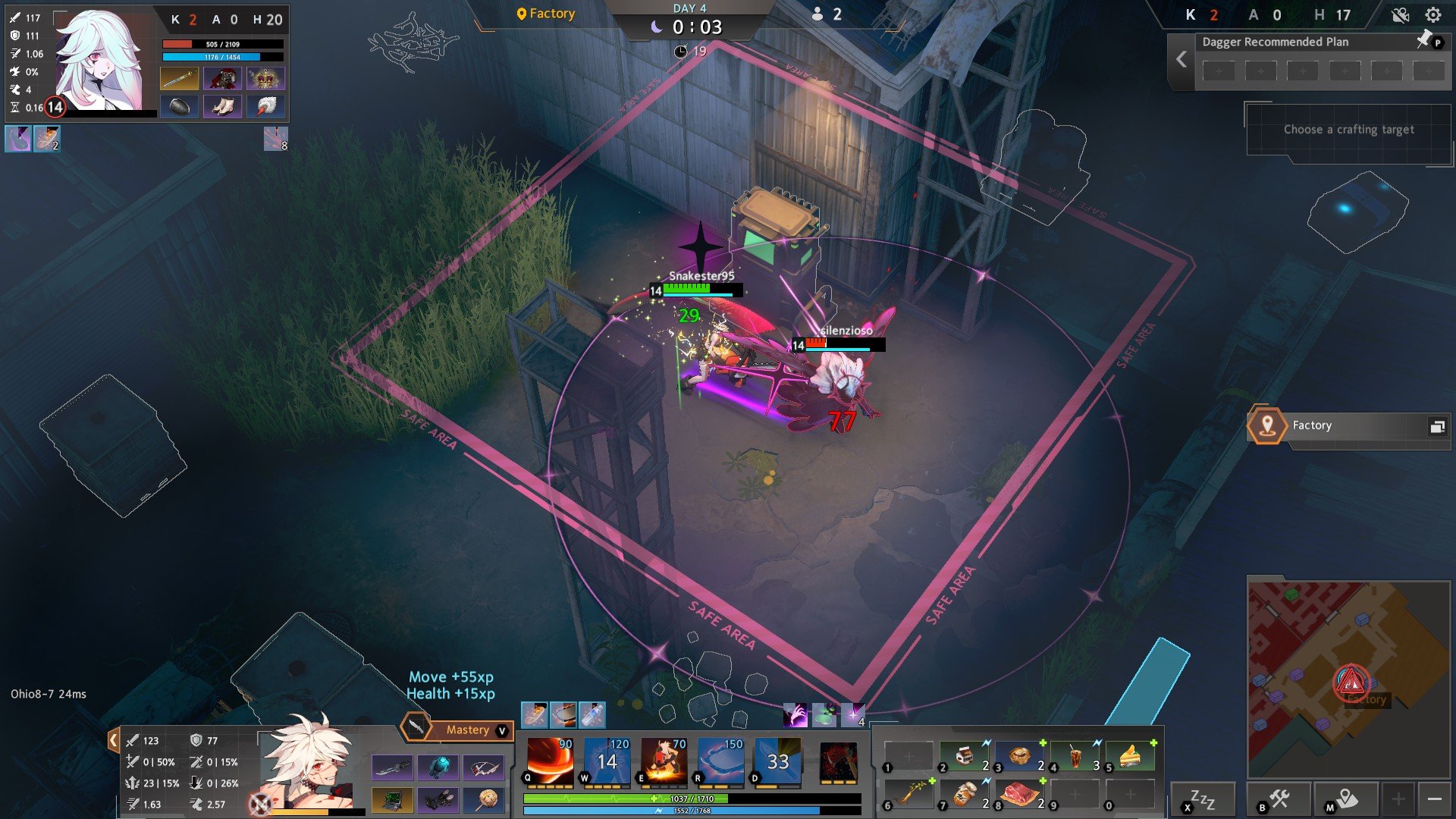 If you’re struggling to win fights when you’re in a duel against someone, 1v1, here are some tips to help.

Tip 6 – Learn a Character You Enjoy 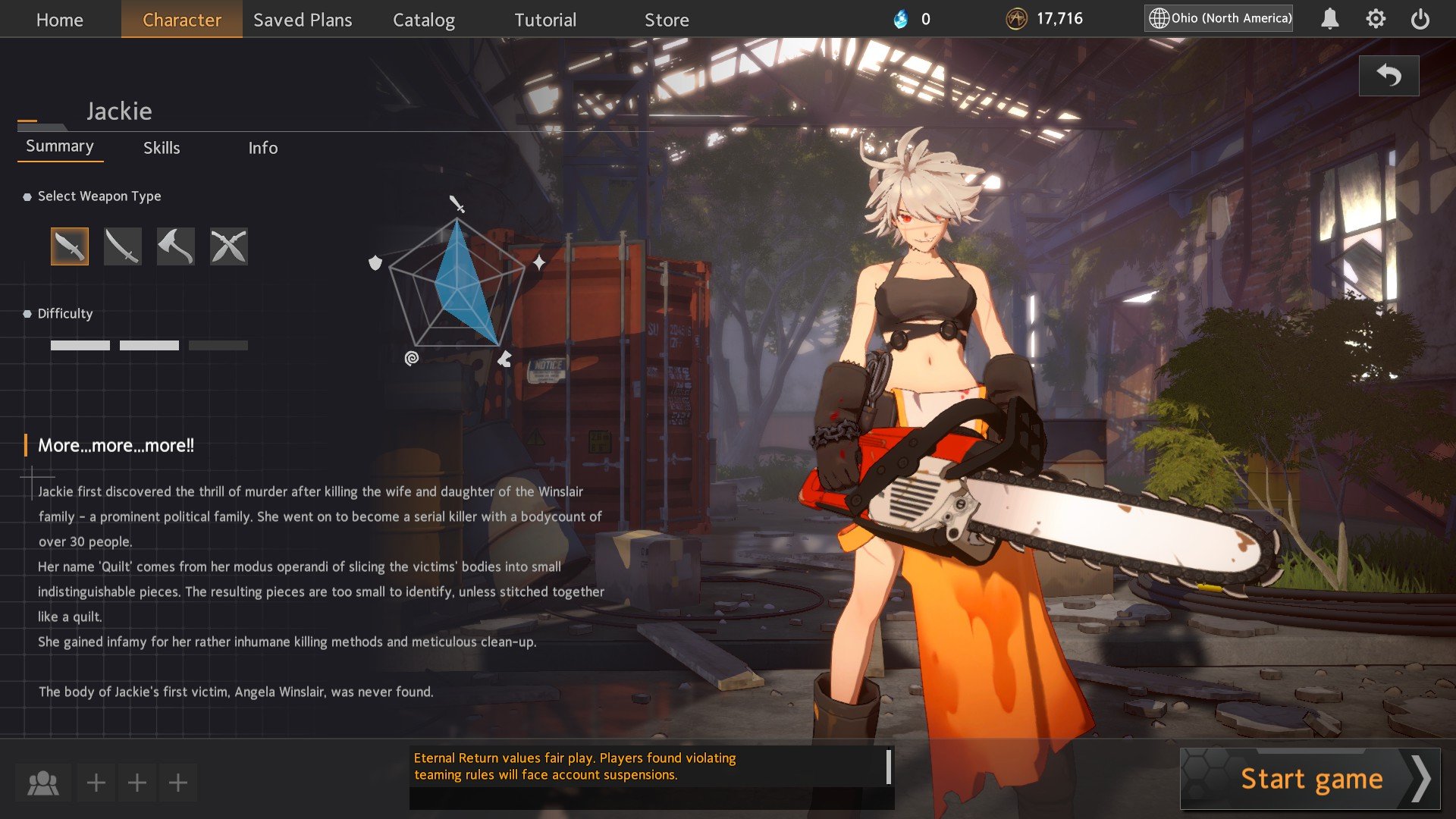 The first thing you should do in Eternal Return: Black Survival is to learn a character that you enjoy playing. This makes it easier to learn the game while simultaneously mastering a character. If you click the Character tab at the main menu before entering a match, you can read up on how each character works. Clicking any character shows how difficult they are to play, how they’re meant to be played, and what their skills are. And if you’d prefer to jump right into a match with a new character, you can always play against AI first.

Tip 7 – How to Escape Easily 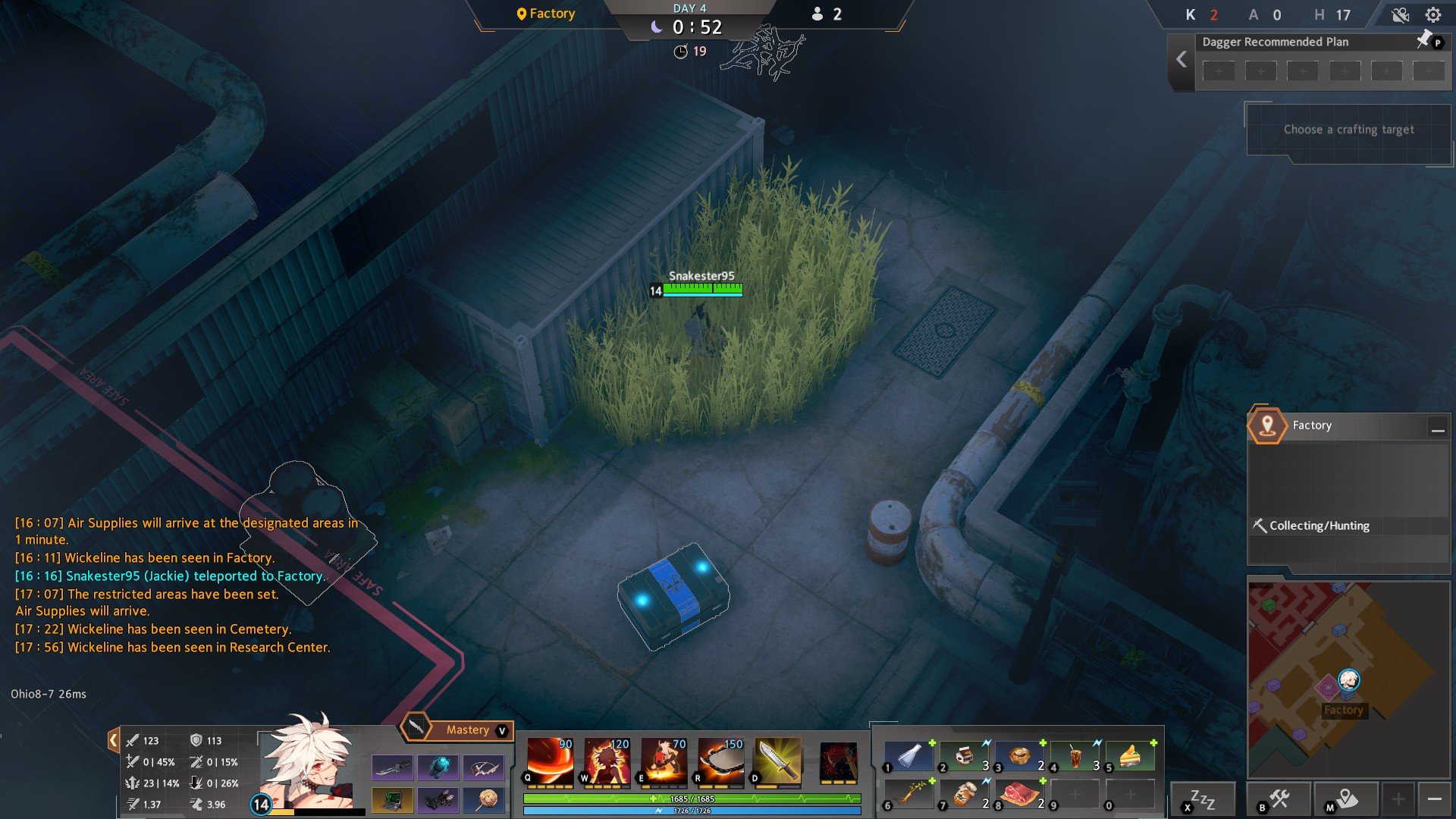 The dreaded reality of battle royale games is that only one person or team can win. This means you likely won’t win every match and should know how to escape fights easily when you’re losing. First, many characters in Eternal Return: Black Survival have skills that help them escape. For example, Jackie can leap over walls using Leaping Strike. While Aya can dash using Leaping Turn to cover some distance.

The best way to escape a desperate enemy chasing you is to prevent them from seeing you. Every time you enter a bush or turn a corner, they can’t see you until they catch up. This prevents them from attacking you and gives you more time to recover health. Eventually, if they can’t continue hitting you, they’ll realize it’s not worth their time anymore. Just make sure you eat food to speed up your health regeneration. And depending on the character chasing you, zig-zag every so often to make skill shots harder to hit. 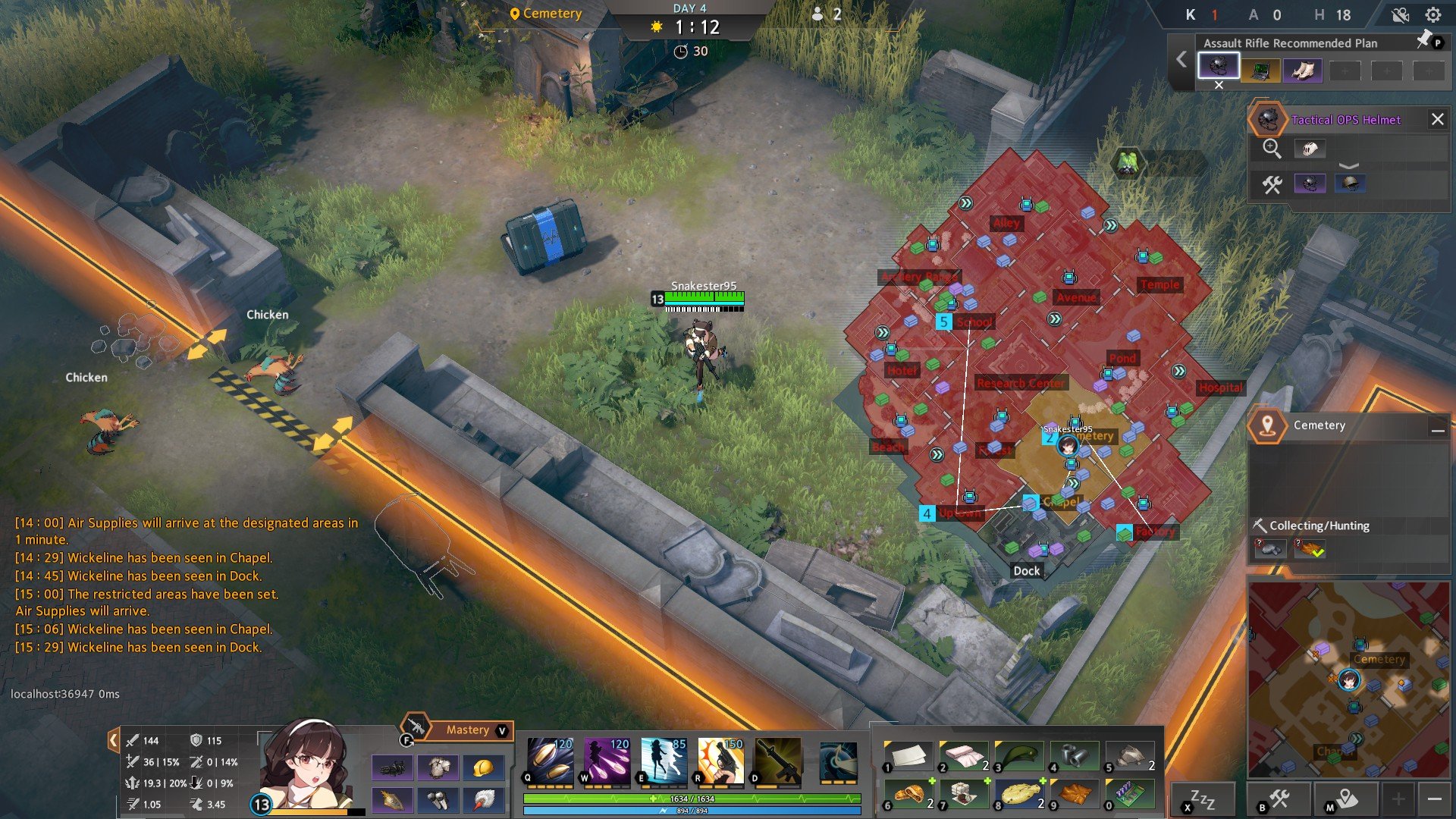 Restricted zones in Eternal Return: Black Survival are red areas where you’ll explode if you stay in them too long. For every match, you have 30 seconds total that you can remain in a red zone before you’ll die. So it’s important to know that you can still explore and loot red zones, you just don’t want to stay in them for long. Because you never know when you’ll need to escape through a restricted zone. Also, the final zone will eventually become restricted and you may need that time to stay alive. And if you didn’t know, yellow zones on the mini-map become restricted once the countdown ends. 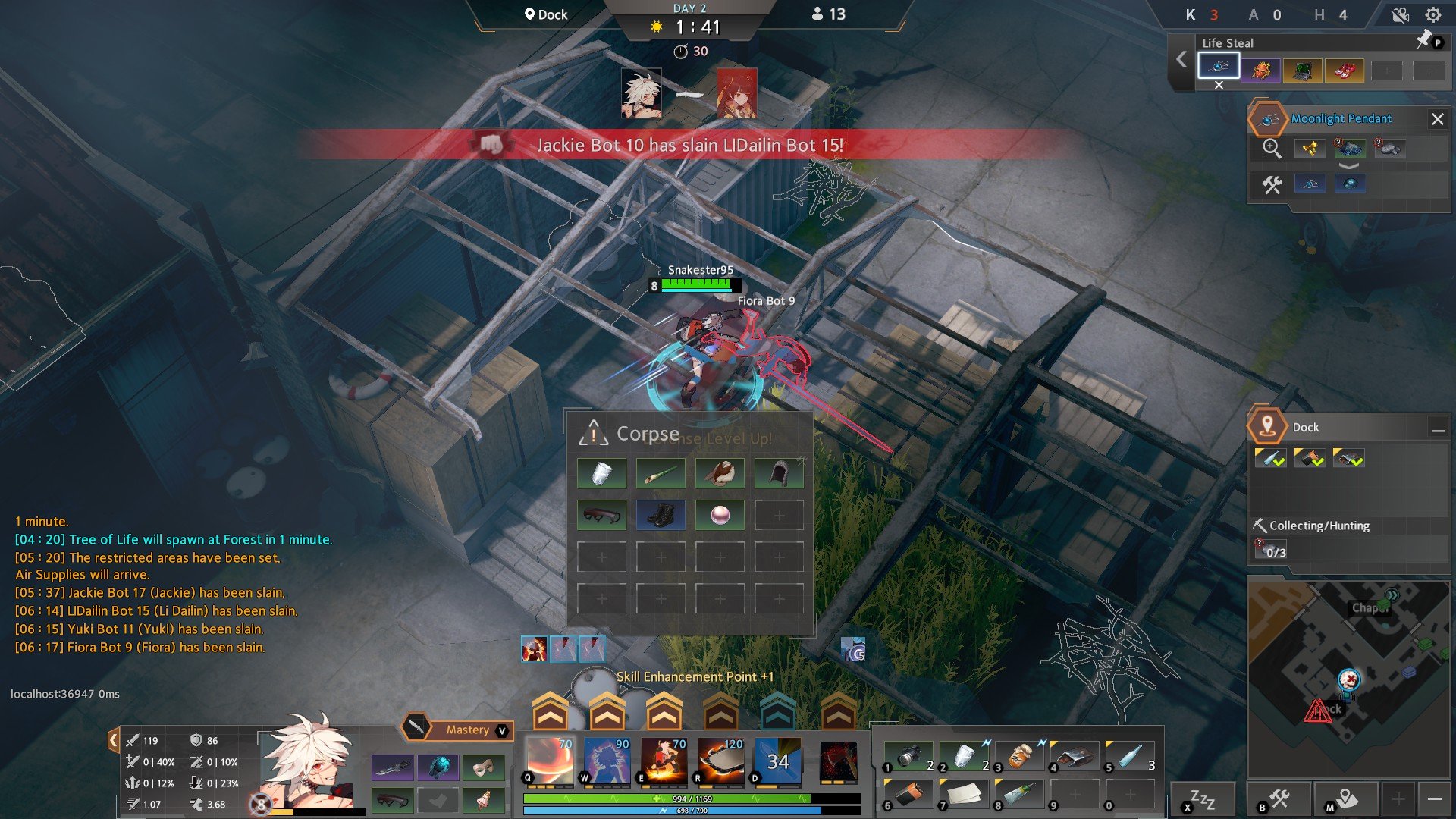 The toughest part of Eternal Return: Black Survival for me was learning how to manage my inventory. It’s always useful to have a slot for a food item and a drink if you have an SP heavy character. However, when you’re gathering tons of different items with the yellow arrow on them, you may not have room for food. This is why it’s important to focus on one item in your build at a time when you’re still learning the game. If you want to change your recipe at the top right, you can click a different item in your recommended build to switch your focus. Otherwise, you’ll end up with a full inventory of items you’re nowhere near crafting yet. 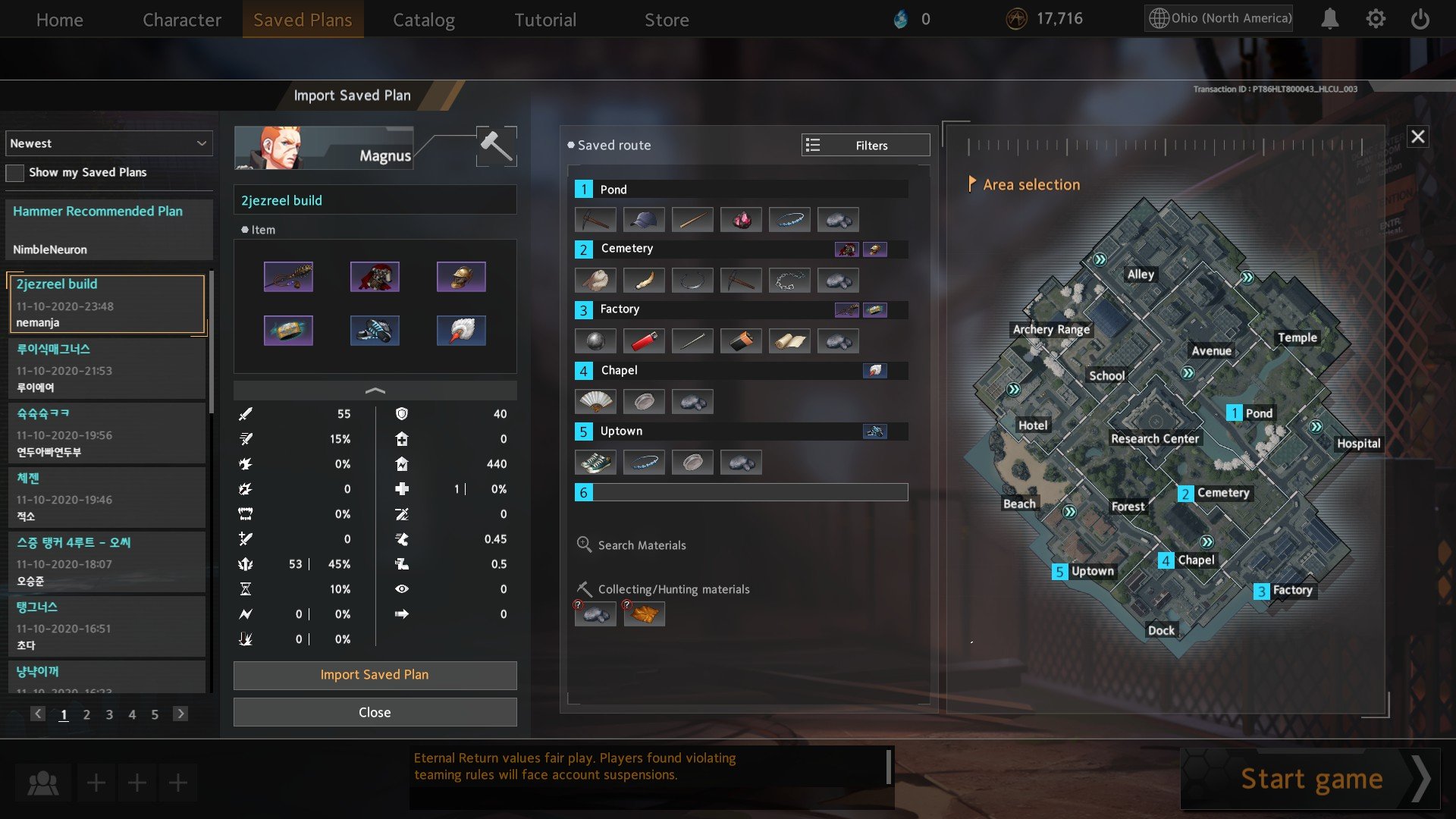 If you want to see what builds other people are creating for each character, click the Import Saved Plan button instead of New Plan. Then, look at named plans on the left side of the screen that you can click to see them. Clicking Import Saved Plan on this screen will save their build so you can pick it when playing.

Be sure to take a look at our tier list here for which characters have the highest win rates in Eternal Return: Black Survival. And if you have any questions about the game, feel free to ask in the comments below for help.