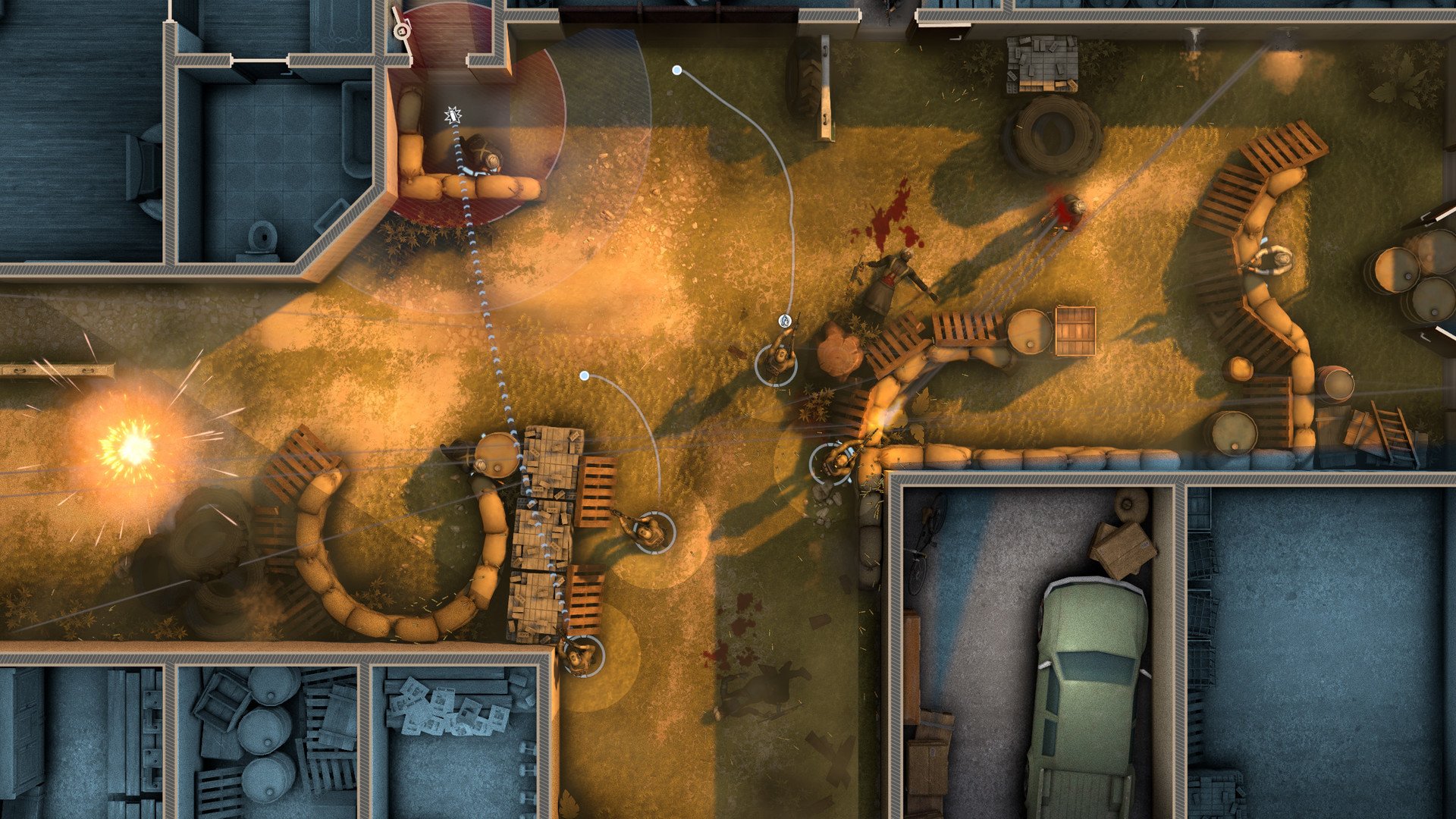 The sequel Door Kickers 2: Task Force North is now available and we’ve got a bunch of beginner tips and tricks in this guide. While Door Kickers 2 hasn’t fully released yet, people can start playing it on Steam Early Access for an early look. In order to help you out, especially if you’re playing the sequel before the original, we’ve got everything you should know below.

Tip 1 – Be Patient and Plan Your Moves 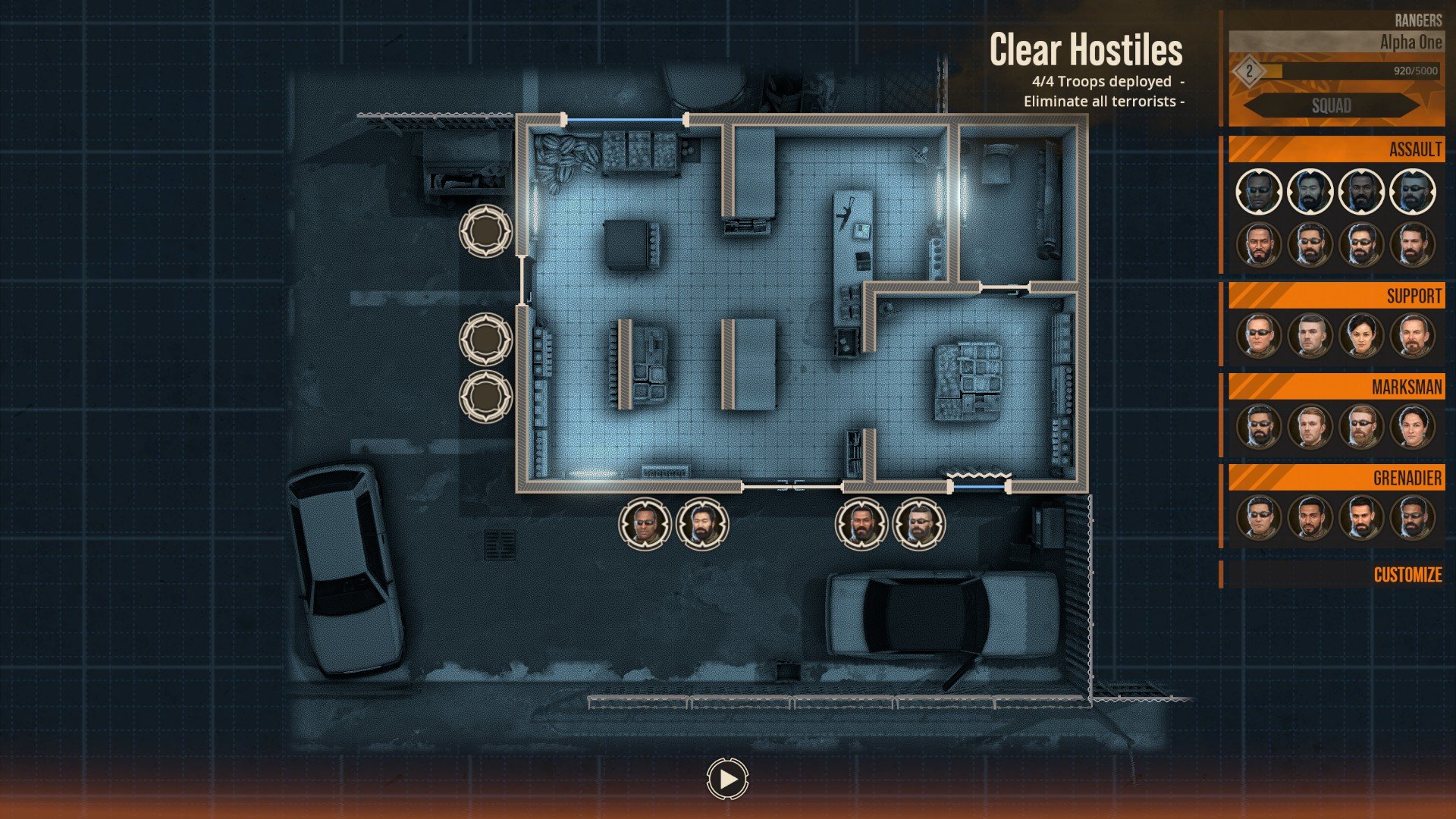 If you’ve played the original Door Kickers game, then you already know how important it is to plan your moves. Fortunately, you can pause and unpause at any time, making it easier to prepare for every scenario. Once you’ve made your initial breach during a mission, you’re likely to have a bunch more enemies start running over due to any noise.

This often provides a great opportunity for mowing them down as they come running through doorways. Another great way to take your time and plan efficiently in Door Kickers 2 is to take advantage of the spy camera gadget. You can use this anywhere to get a little more vision in front of you, especially under doors. 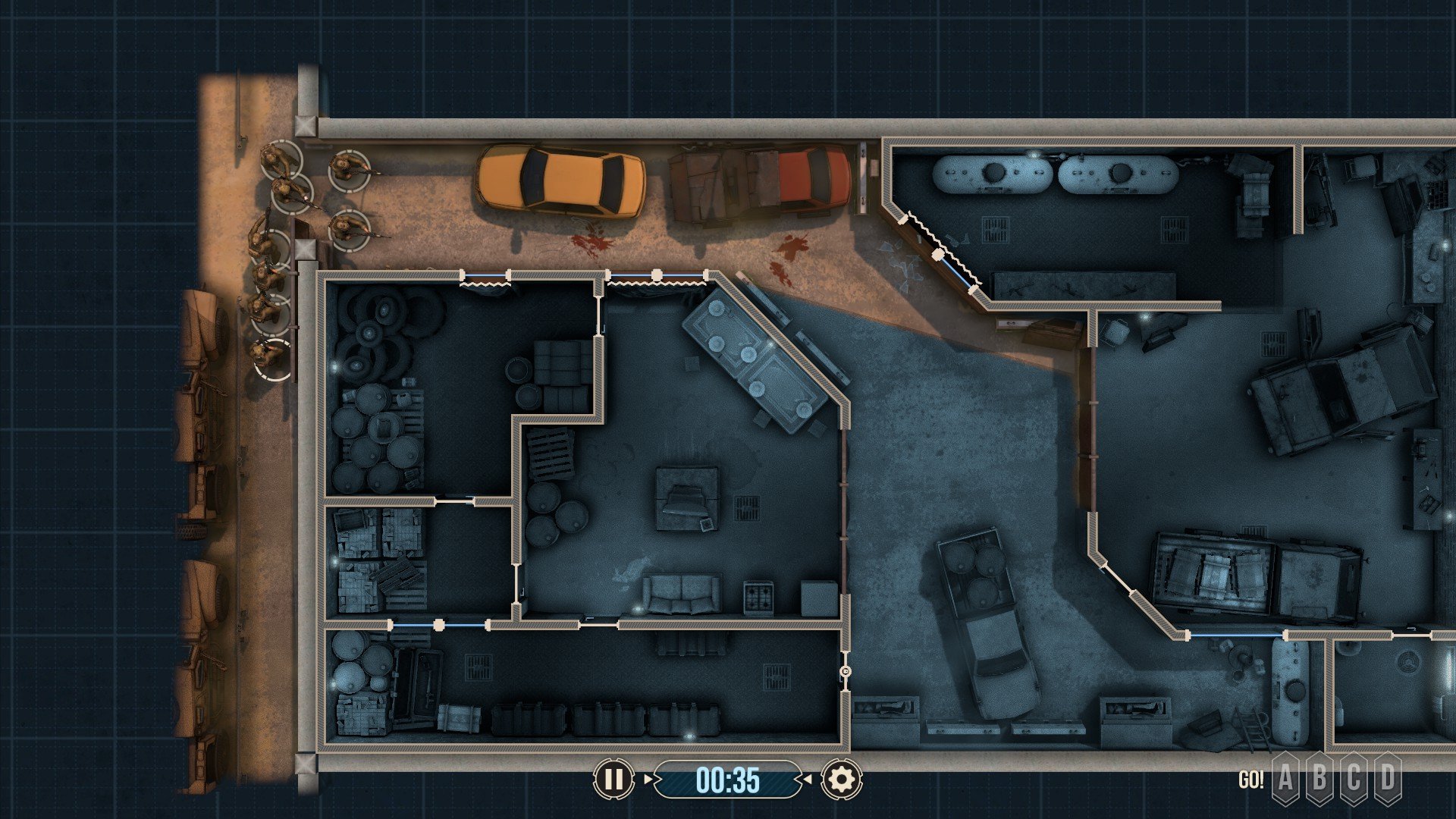 Branching off of the first tip in this Door Kickers 2 guide, you should learn every entry point. That means looking at every possible way into a building and potentially out. By doing so, you always know where enemies can come from and how to prepare for that.

The last thing you want is to get tunnel-visioned and have an enemy flank your entire squad. Plus, you can find unique ways to enter each building and potentially surprise enemies. While it doesn’t seem that enemies will pass through windows, you can still break them and enter this way too.

Tip 3 – How to Breach Doors Tactically 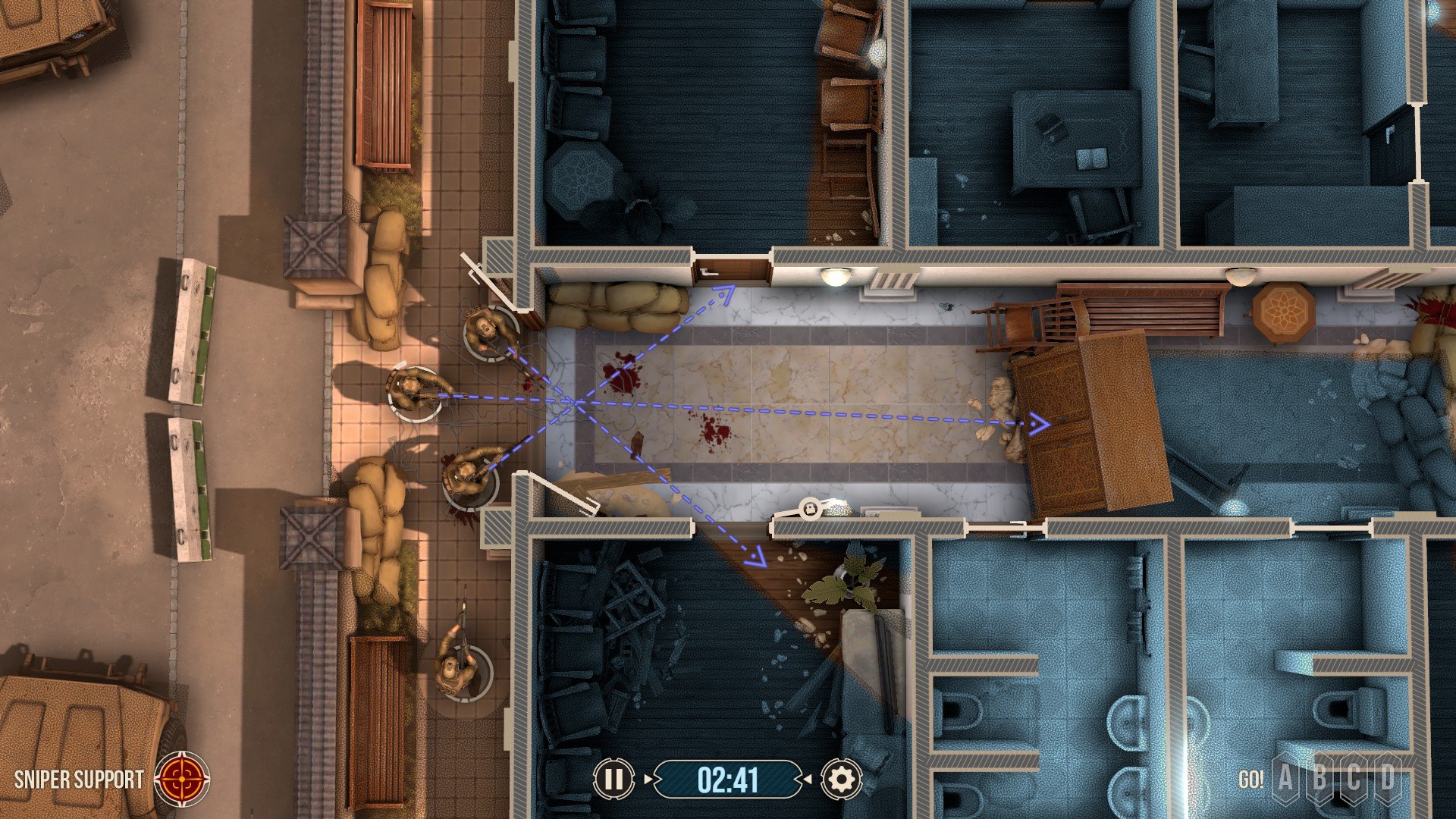 A useful strategy is to peek through the doorway with someone on both sides before entering. Unless you’re going for an element of surprise with an explosion or smoke grenade to breach through immediately.

Tip 4 – Clear Rooms One by One 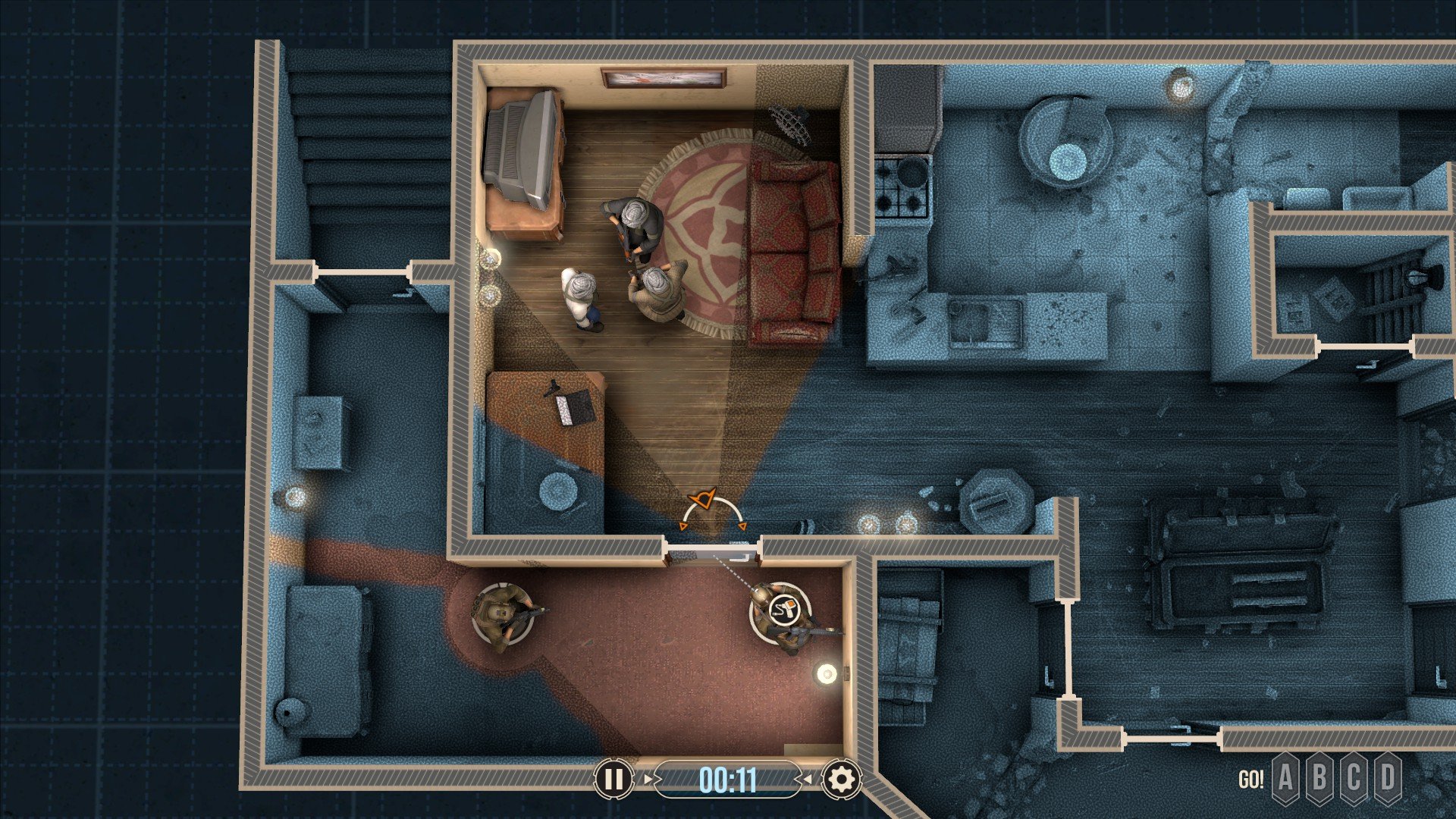 Enemies in Door Kickers 2 love running over to any source of noise as mentioned in my first tip. This is why you should have a plan to clear each room of a building as you’re moving through. You never know what enemy is waiting inside a closet or bedroom waiting to pounce.

Therefore, always be prepared by having someone watch nearby closed doors if you’re busy opening other ones. A neat trick for distracting enemies is to toss a grenade far away from you that enemies will go to investigate. This can work to your advantage for catching them from behind. 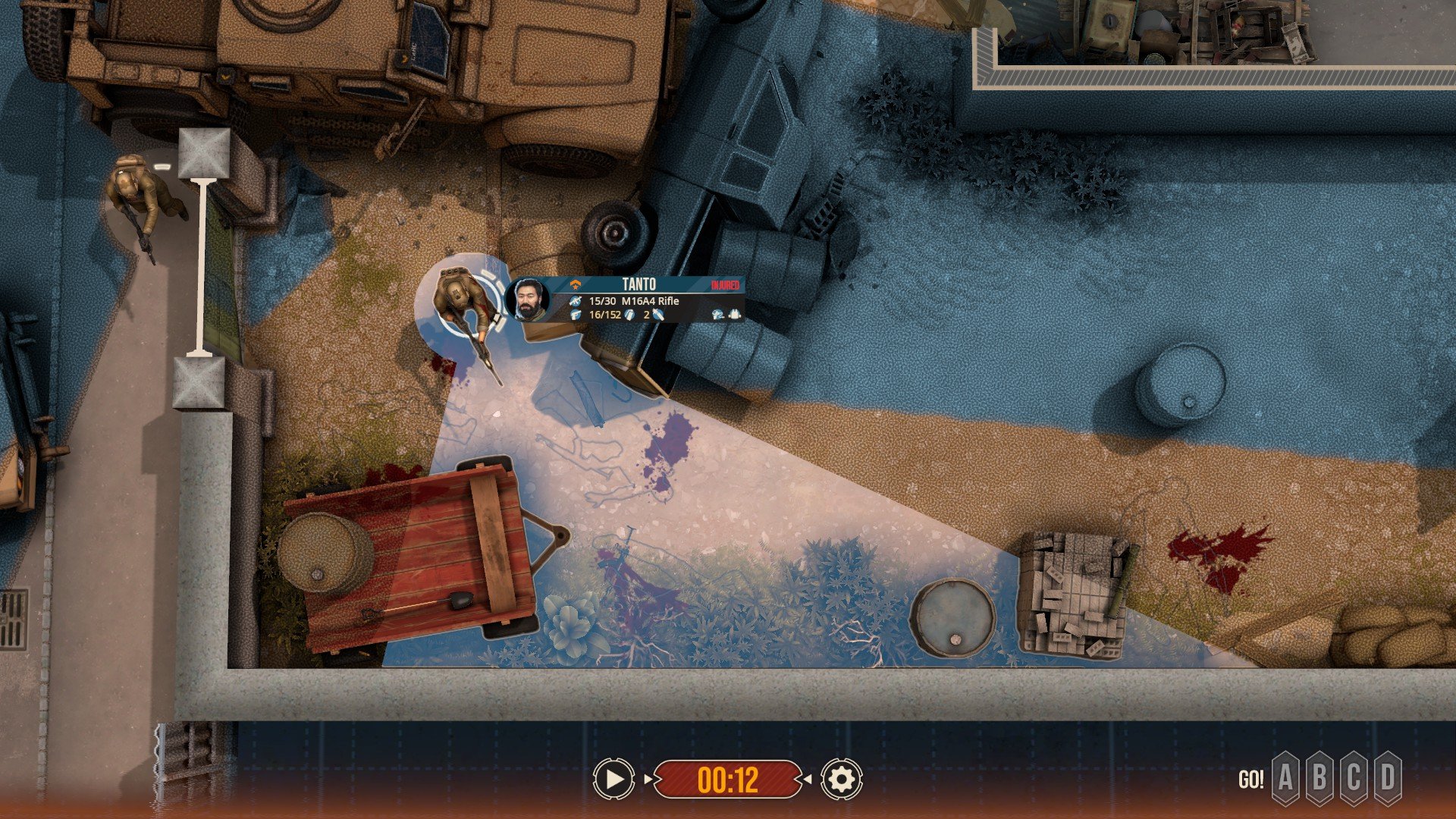 Every unit in your Special Ops Team has standard body armor on by default, but as we all know, this doesn’t always keep them safe. Once they start getting shot, they’ll call out alerting you that they may be injured.

Fortunately, their armor has a chance of preventing them from being injured regardless of them calling out. However, when they do get injured, you can hover over their character to see an “Injured” word in yellow or red. If it’s yellow, they’re hurt, and if it’s red, they’re almost dead.

You should often plan around injured characters because losing people leads to lower stars for your mission. Depending on the roles in your squad and how many people you have, you’re better off keeping an injured person in the back. While having a healthier person in the front breaching instead. 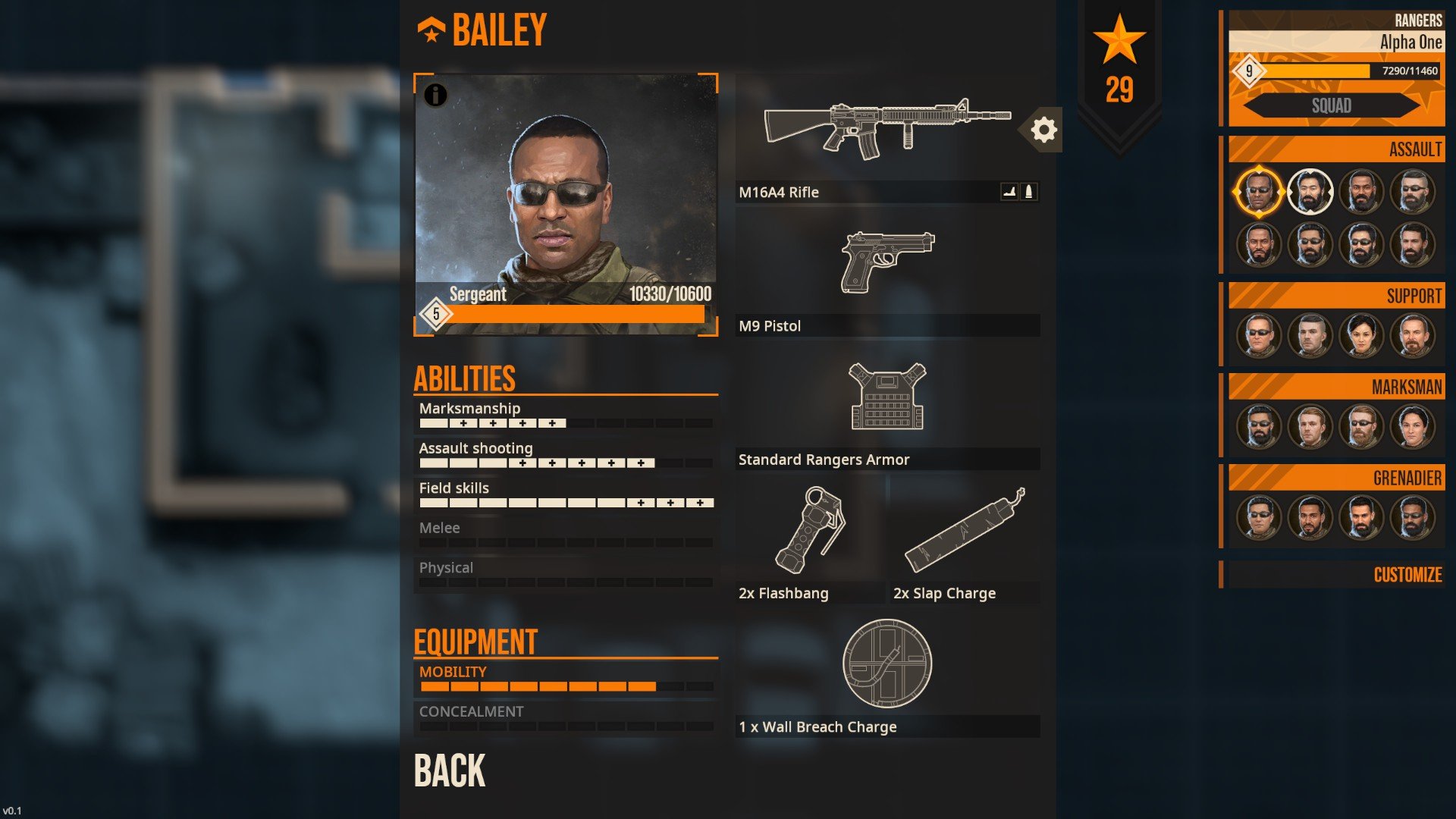 Door Kickers 2 has four new classes in the current version of Steam Early Access that are different from the original. The big difference between each class/role is what guns they have access to. Otherwise, they can all use the same equipment such as breaching equipment or grenades. Take a look below to figure out what the best class is for your squad.

Every time you start a new mission, you’ll get a default selection of units and classes. These may be decided by the developer to try and give you a well-rounded group depending on what mission it is. However, you can still swap people in from the right side to starting locations on the map. Just remember, every mission has a max amount of units/troops. 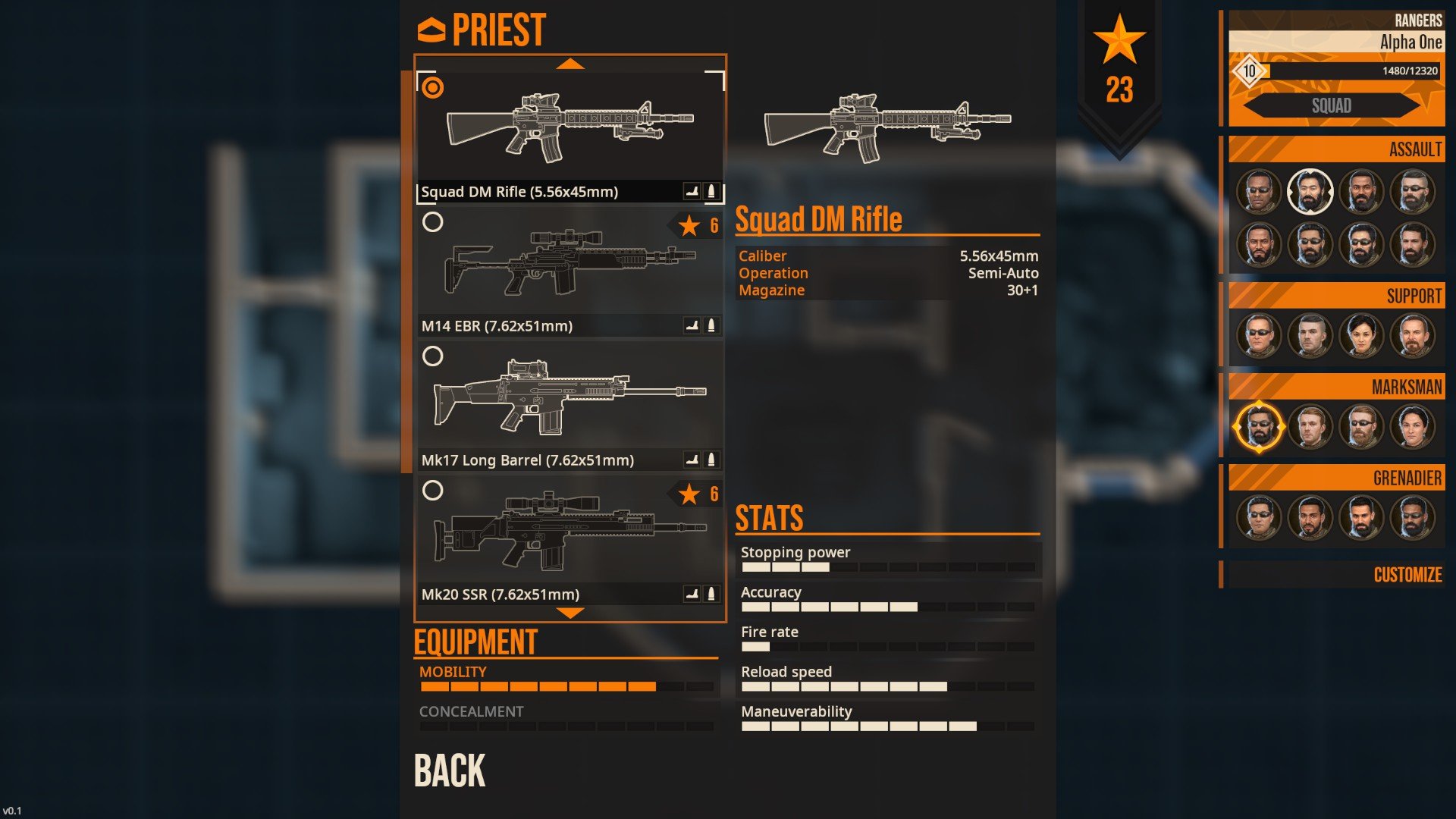 If you read our previous tip and are wondering how to get new guns in Door Kickers 2, here’s how. First, you’ll need to enter a mission to reach the planning screen. Here you can click the Customize button at the bottom along the right side of the screen where all your troops are.

After doing so, click any character’s portrait on the right side to pull up their profile. Here you can click the gun they have equipped to reveal a list of purchasable guns using stars earned from each mission. Also, you can click the cogwheel icon next to a gun to equip attachments or different bullet types.

Every mission in Door Kickers 2 has a specific objective depending on the type of mission. Before you click a mission, there’s a small icon at the top left corner of each one showing what it is. However, if you don’t know, don’t worry, just click the mission and the top-right will tell you what to do.

The reason this is a tip is because you don’t want to go guns blazing into a building with hostages. Any hostage mission where the hostage dies leads to an immediate failure. For information on each mission type, read about them below. 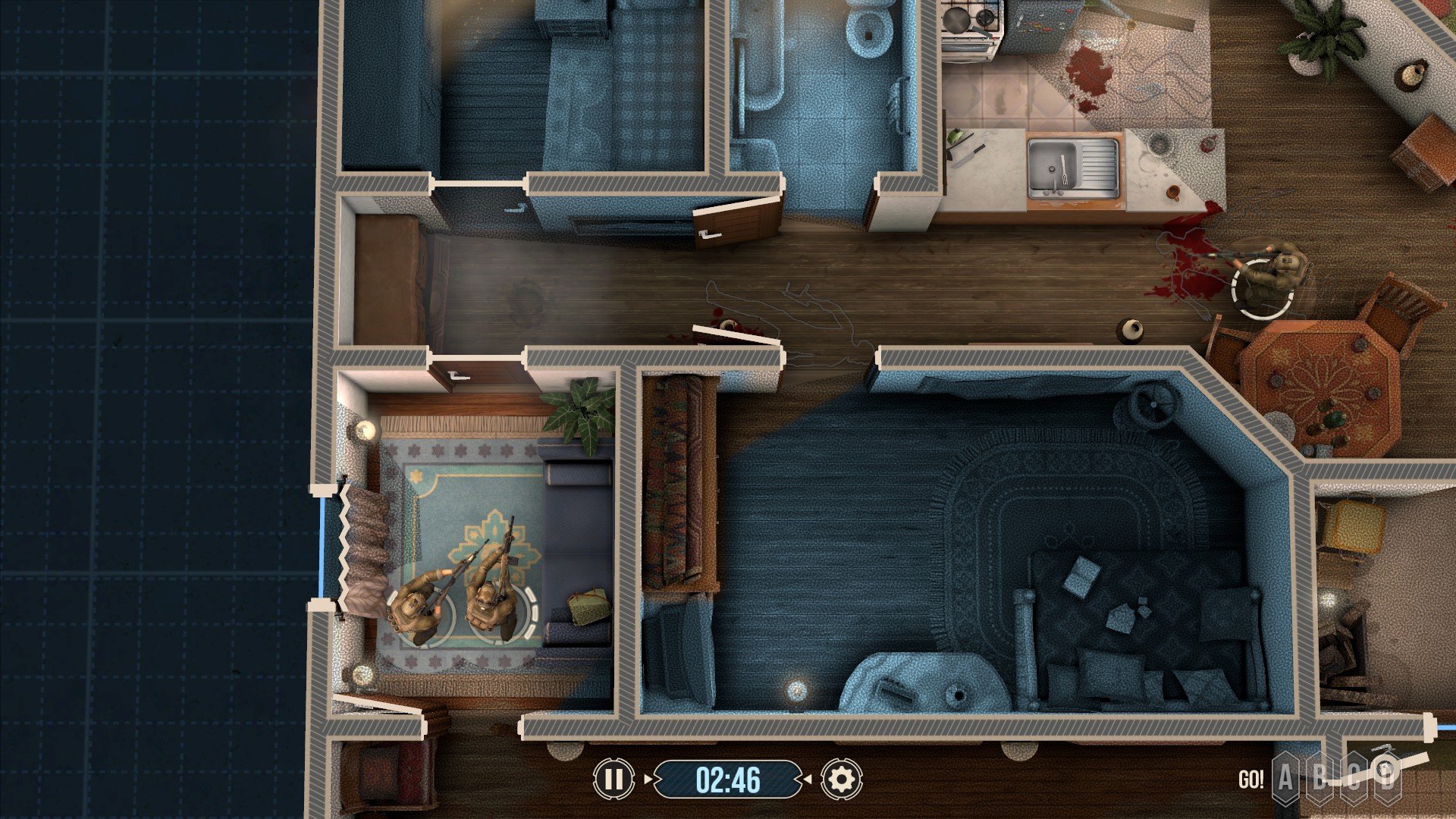 Every mission has a different layout that you’ll need to learn if you plan on getting those three stars. While exploring and searching for hostiles, always be aware of your squad’s positioning. By keeping a couple of your troops together, they’re more likely to survive when they get bombarded by enemies.

However, if you keep too many troops together, you run the risk of grenades killing them all. There needs to be a balance and you should always try to adapt to your surroundings. Especially be careful of putting your troops in danger by having them look the wrong way.

Another reason it’s important to keep track of where everyone is in each mission is because your troops can’t shoot through each other. If your whole squad is standing in a straight line, in a hallway, they’re mostly useless.

Try to give your troops unique angles that benefit everyone providing more coverage. Also, you can have a unit crouch to open a door with someone behind them to shoot above. But it’s important to know crouched units can’t shoot. 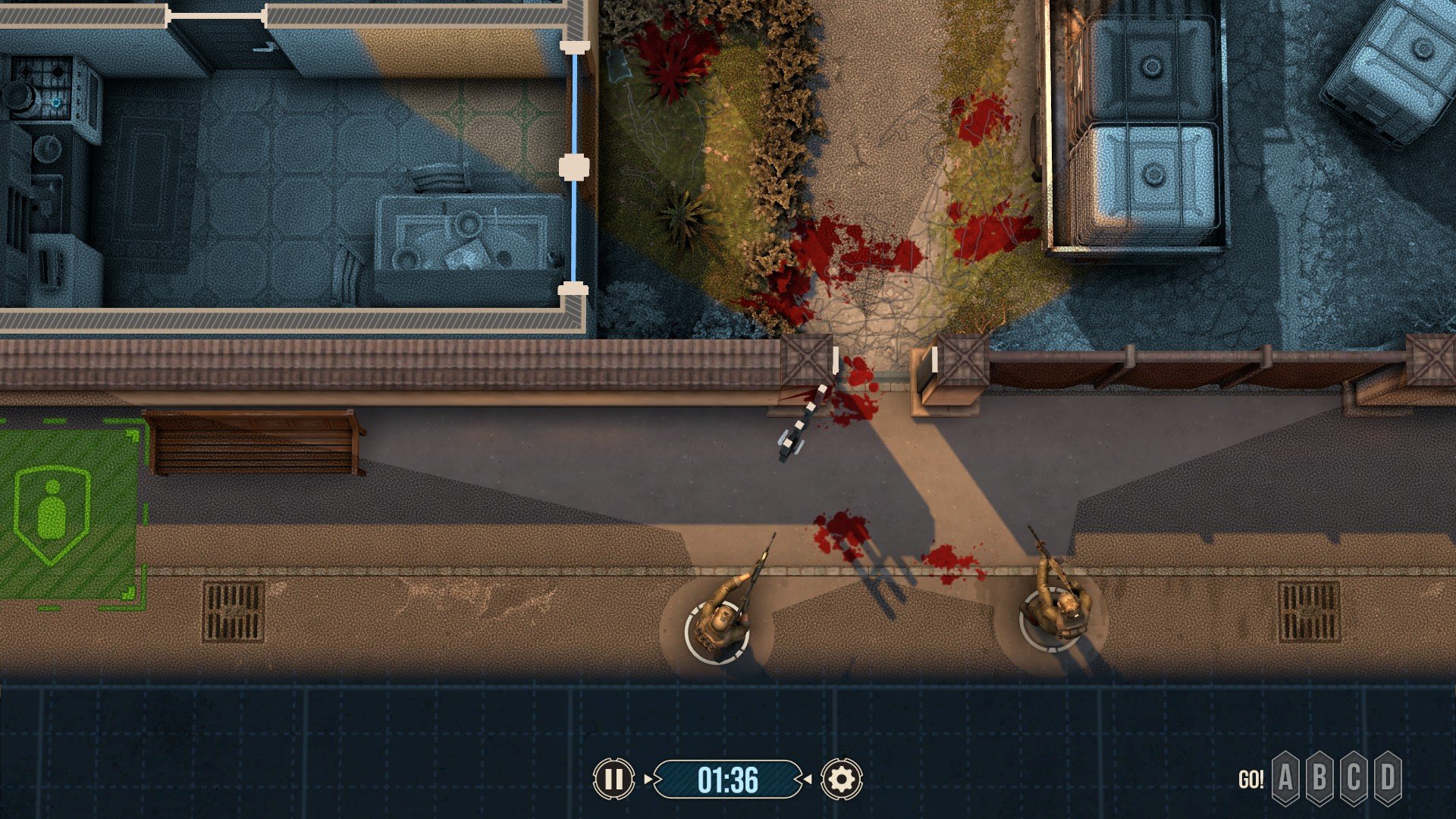 This is a simple tip to finish things off for our Door Kickers 2 guide primarily since the tutorial tips don’t seem to discuss it yet. Fog of war is a mechanic in many games where you can’t see an area until your units have vision of it. One of the reasons I’m mentioning fog of war has to do with doors being opened by enemies.

If you can’t see a door, you still have a chance of hearing it opening. However, the door won’t update as opened until you see it, and then it does an animation/sound of it opening. But, it’s important to know that it wasn’t necessarily just opened.

Also, the more obvious tip here, is that you can see what a unit sees by hovering over their character. This shows a blue cone of vision for where they’ll shoot at any enemies entering it. While at the same time, they won’t shoot any enemies outside of it.

Door Kickers 2: Task Force North became available on November 3, 2020, for PC via Steam Early Access. Developer Killhouse Games mentioned on the Steam page that they’re planning 12 to 16 months in Steam Early Access. As goes with any early version of a game, remember that these plans can change.

Door Kickers 2: Task Force North was provided by the developer via a Steam code.