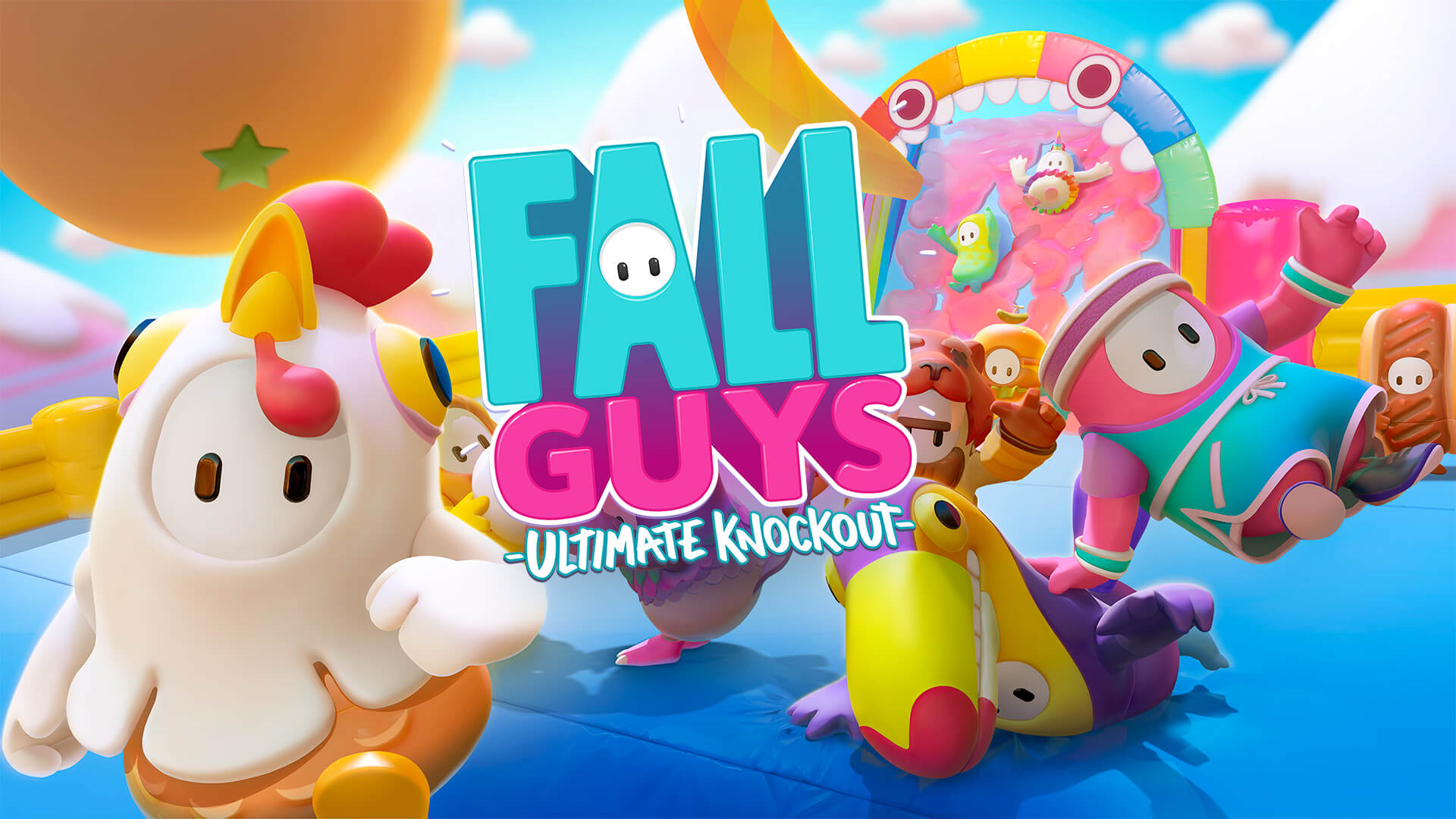 If you’ve just started playing Fall Guys and haven’t had your first win yet, take a look at our guide with all sorts of tips and tricks. This silly and colorful battle royale game is full of difficult obstacle courses and challenges that will catch you by surprise. Hopefully we can help you go in prepared! 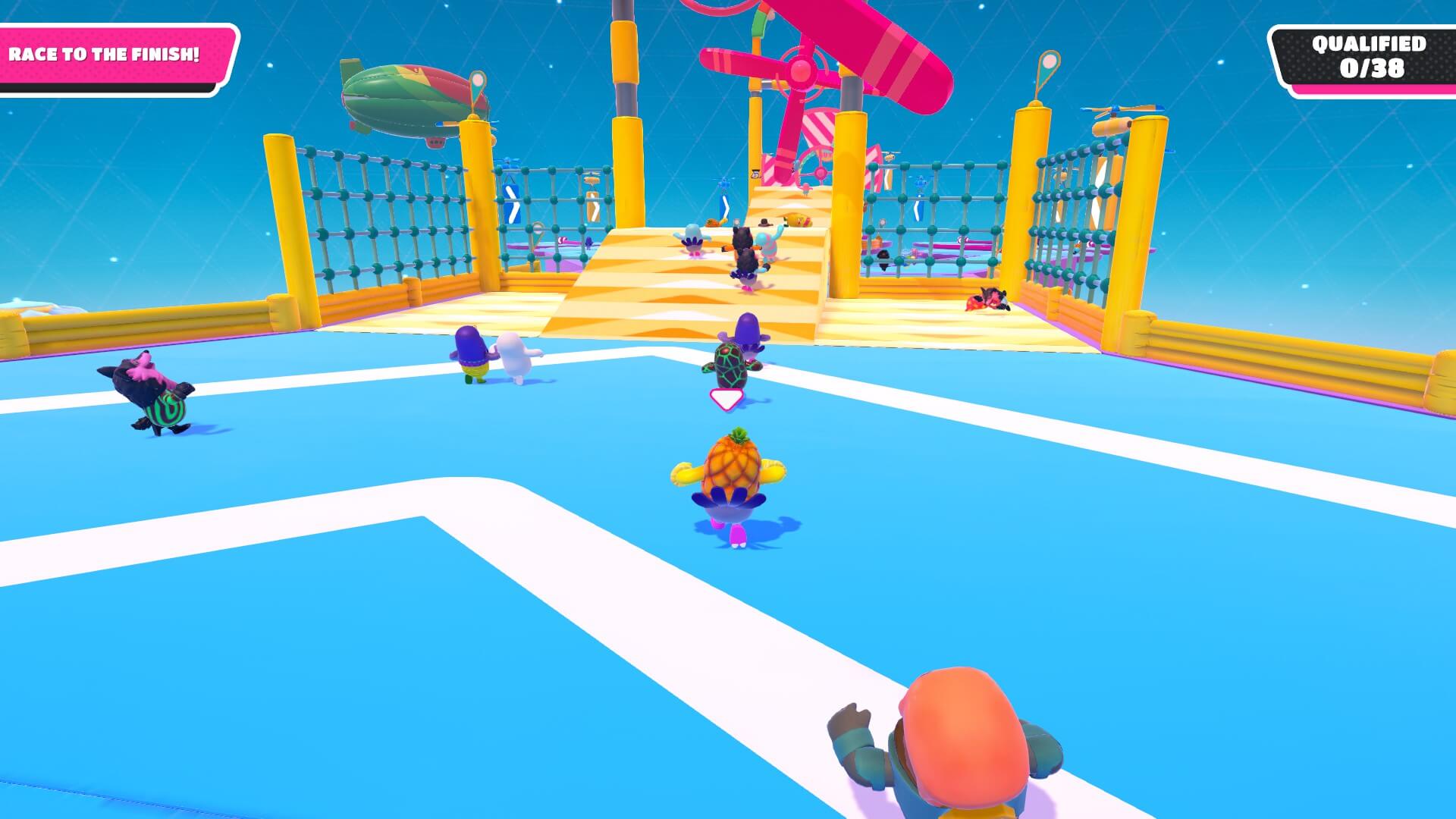 The most common maps/challenges you’ll come across in Fall Guys are races. Before you can sprint through these as fast as possible, you’ll want to take it slow. This is a good way to see where people go and how they also mess up. By watching, it gives you an opportunity to not make their mistakes and tread a little more carefully. Sometimes by playing more slowly, you’ll save time by not falling off a platform, for example.

Since the first round is always a race (in my experience), there’s also a large number of people that can qualify. This essentially means, don’t worry so much about being first. Focus on completing the race instead. 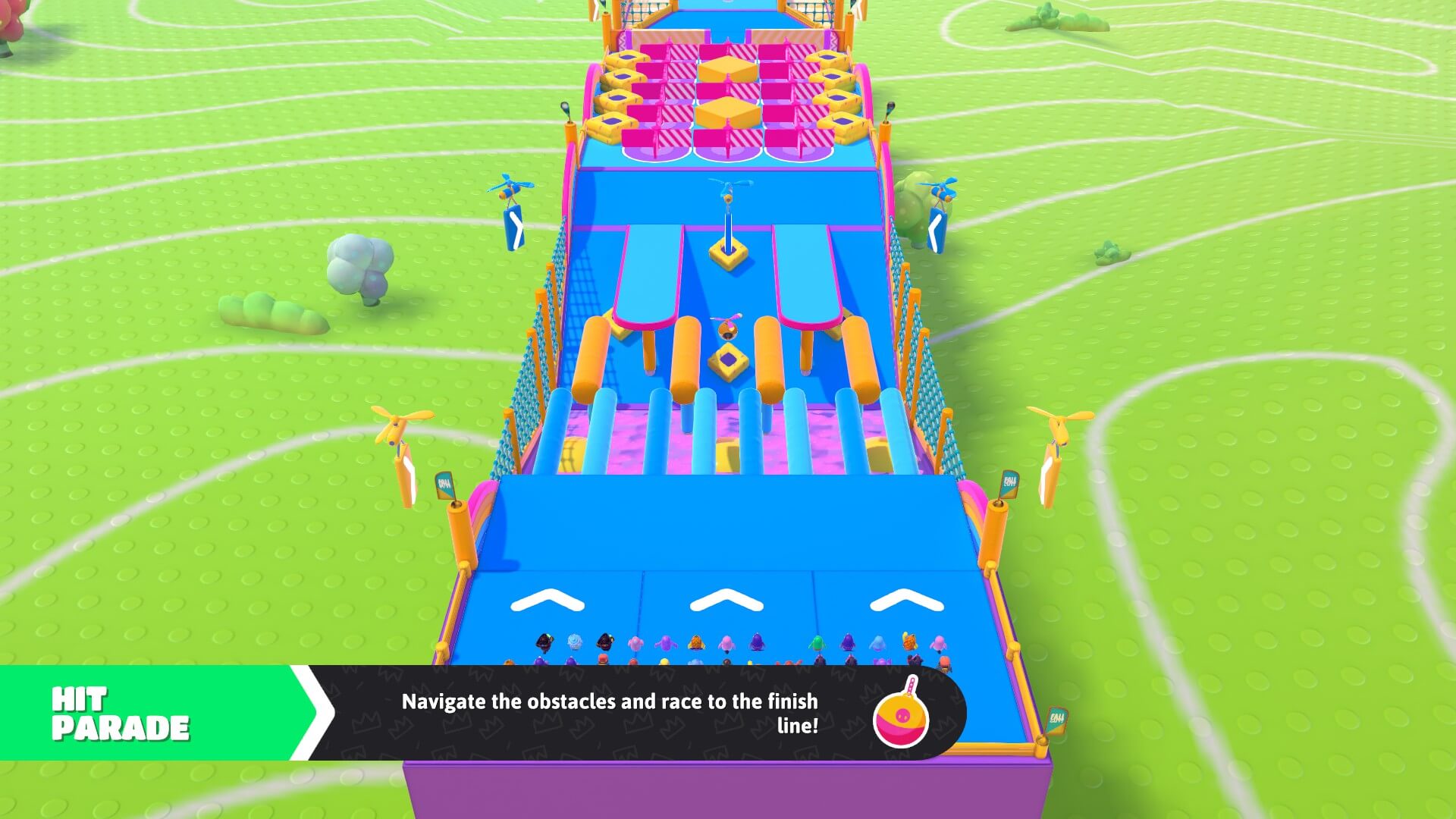 Branching off of the first tip, it’s important to learn each map and obstacle course before becoming an expert. Your first few games are less likely to be great ones, because there are all these little hidden tricks and pits that you don’t know about. As you become more experienced with each mini-game and map, you’re a lot more likely to not mess up. So try not to be disappointed when you’re first trying Fall Guys if you’re not doing too well. 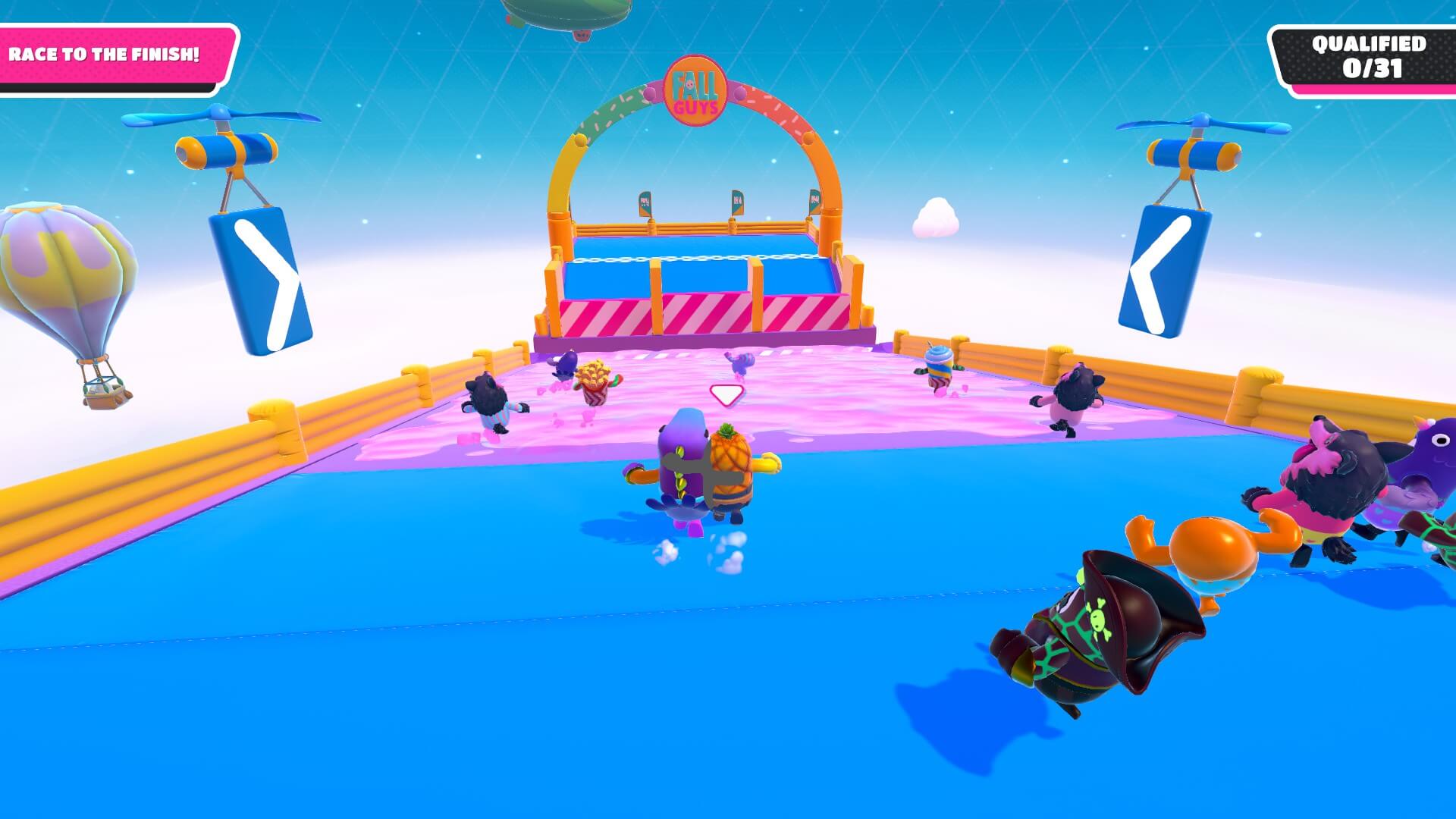 One of the best ways to get around giant jumbled groups of players is to take advantage of diving. If you combine a jump with a dive mid-air, this can give you the boost you need to get past them. Also, diving is great for when you need to close the gap between you and another player finishing a race. The only disadvantage of diving is that it takes around half a second to recover and you’ll lose any momentum you had from running. So while there are great moments to dive, don’t do it to move quicker.

There are plenty of other great diving opportunities that you’ll notice when dealing with obstacles. As you become more familiar with each map, you’ll see situations like a pesky fan or swinging wrecking ball. And then realize you can dive to dash out of the way. 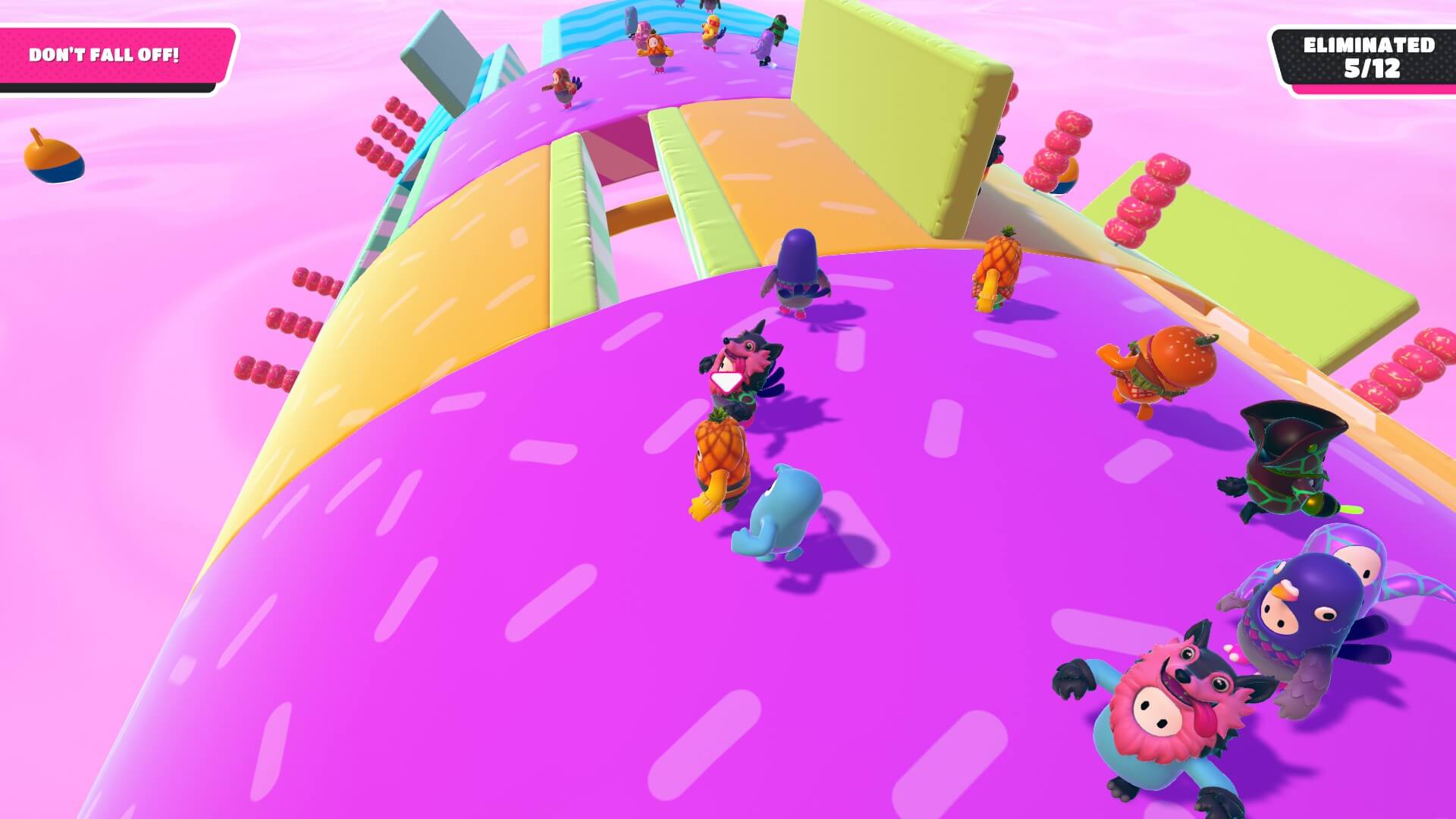 The early rounds in Fall Guys won’t eliminate you for failing an obstacle. These rounds are more focused on knocking out people that are too slow to finish a race. That means, if you accidentally fall off a platform or get knocked backward, you’re not out. Remember this, because there’s always an opportunity for you to finish the round.

Also, you may notice a quiet ringing sound that marks a checkpoint on race maps. While there might be a difficult or frustrating obstacle up ahead, this is a nice backup. Alongside checkpoints, certain obstacles will give you an alternate route if you mess up. In some cases, the alternate route is the quicker one. Especially when you have fewer players to deal with.

Tip 5 – Team Games Are About Working Together 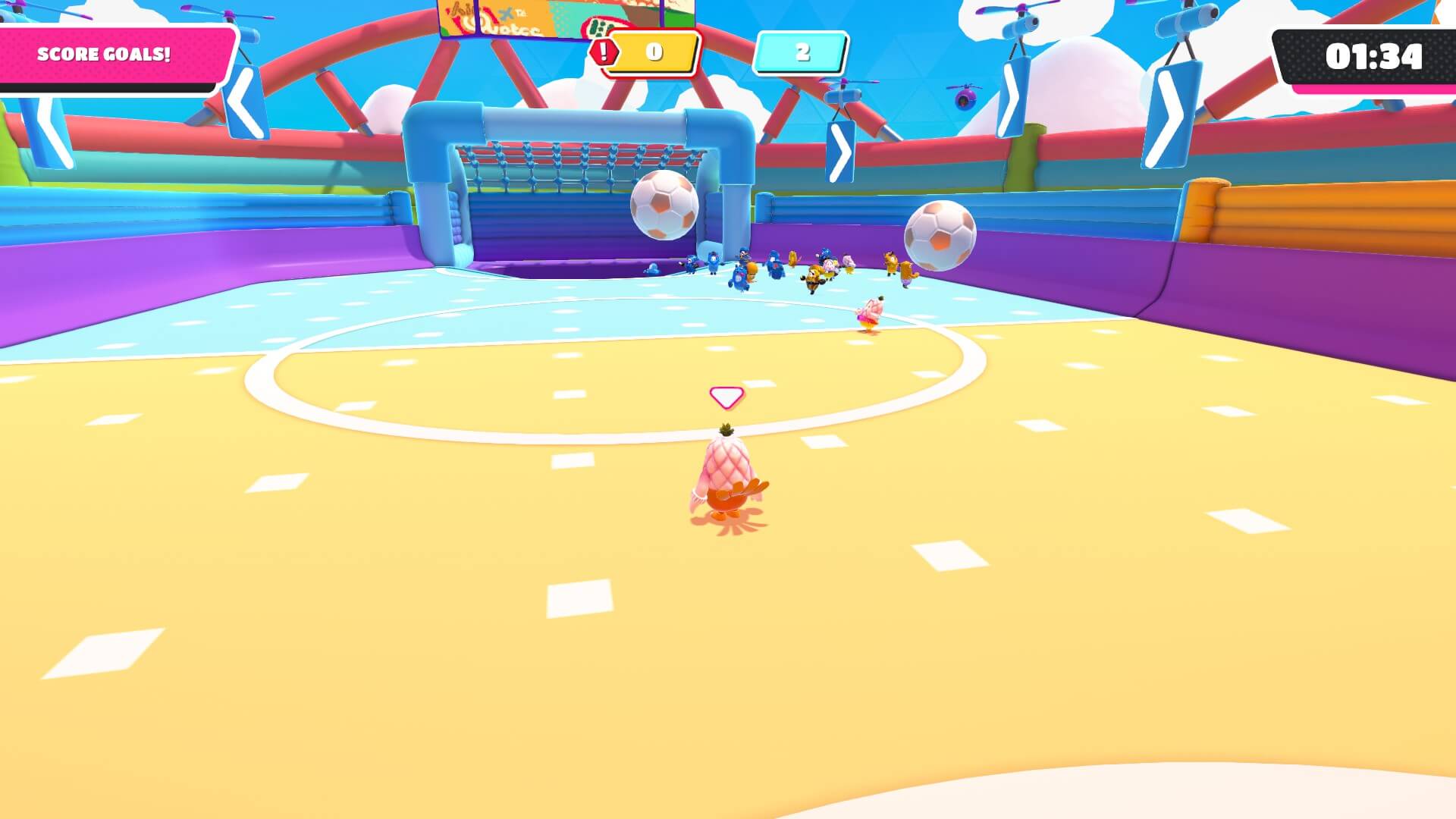 Pay attention to when the mini-games change because sometimes you’ll be working with other players for a team game. Depending on the map, you should always try to coordinate with your team even though there’s no actual communication. For example, there’s a mini-game called Tail Tag where your team has to grab tails from other players. There’s no point in grabbing tails from your own team. However, you can still try to grab players going after teammates or just go after other teams instead.

Team games are a fun way to change up the pace by encouraging teamwork instead of a free for all. However, there is the unfortunate case when two of three teams focus on one team. This creates an unfair situation and sometimes there’s nothing you can do.

Tip 6 – Separate From the Herd When It’s Right 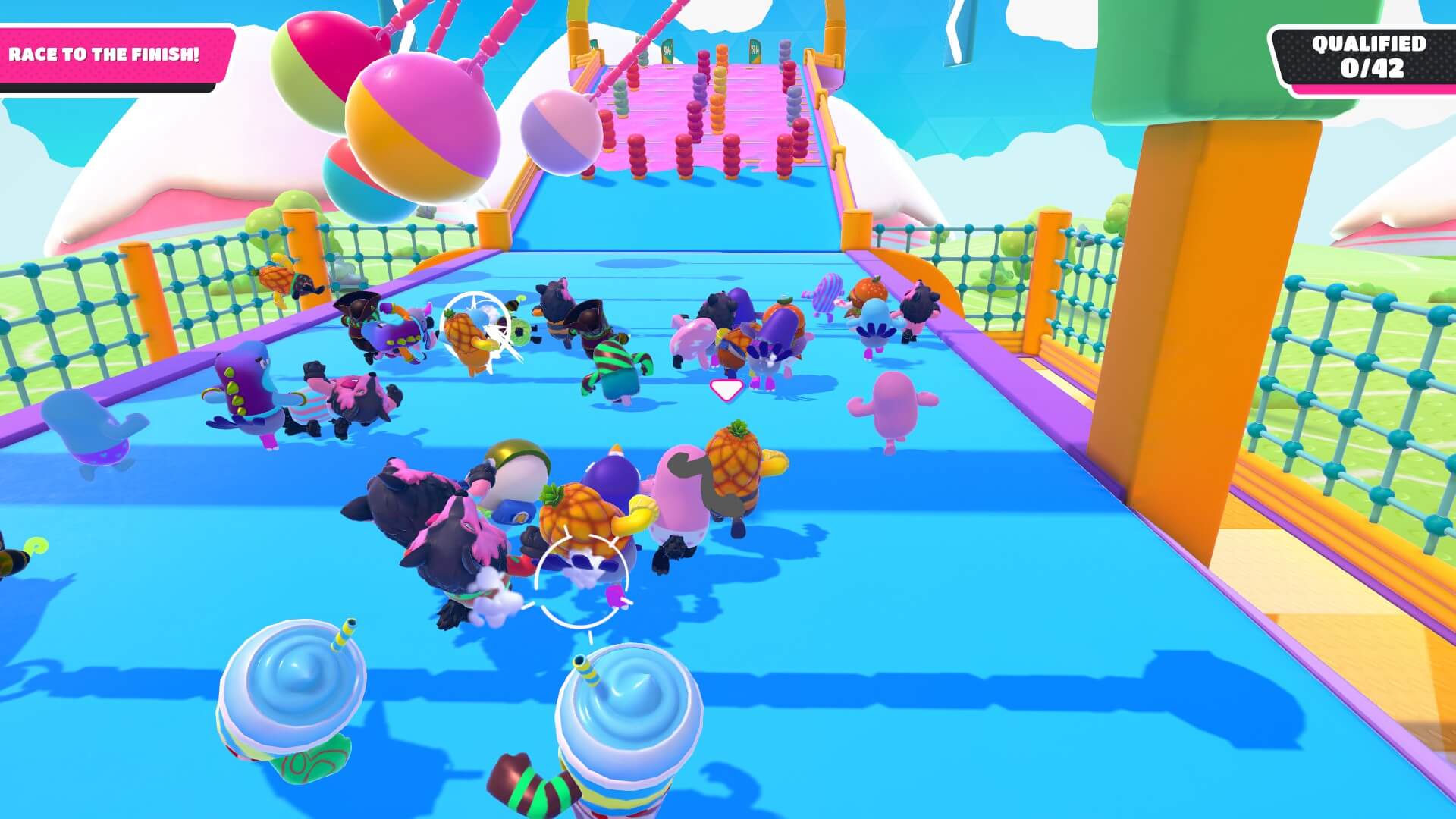 It’s important to know when to follow the herd and when not to. Sometimes, you’re better off not getting caught in a jumble of players. While other times, you might not have a choice and simply have to dive around them as mentioned in tip 3. Fall Guys is full of chaos especially in the early rounds, because there’s an abundance of players panicking to survive. A big part of learning how to win in Fall Guys is to learn how to play around them. 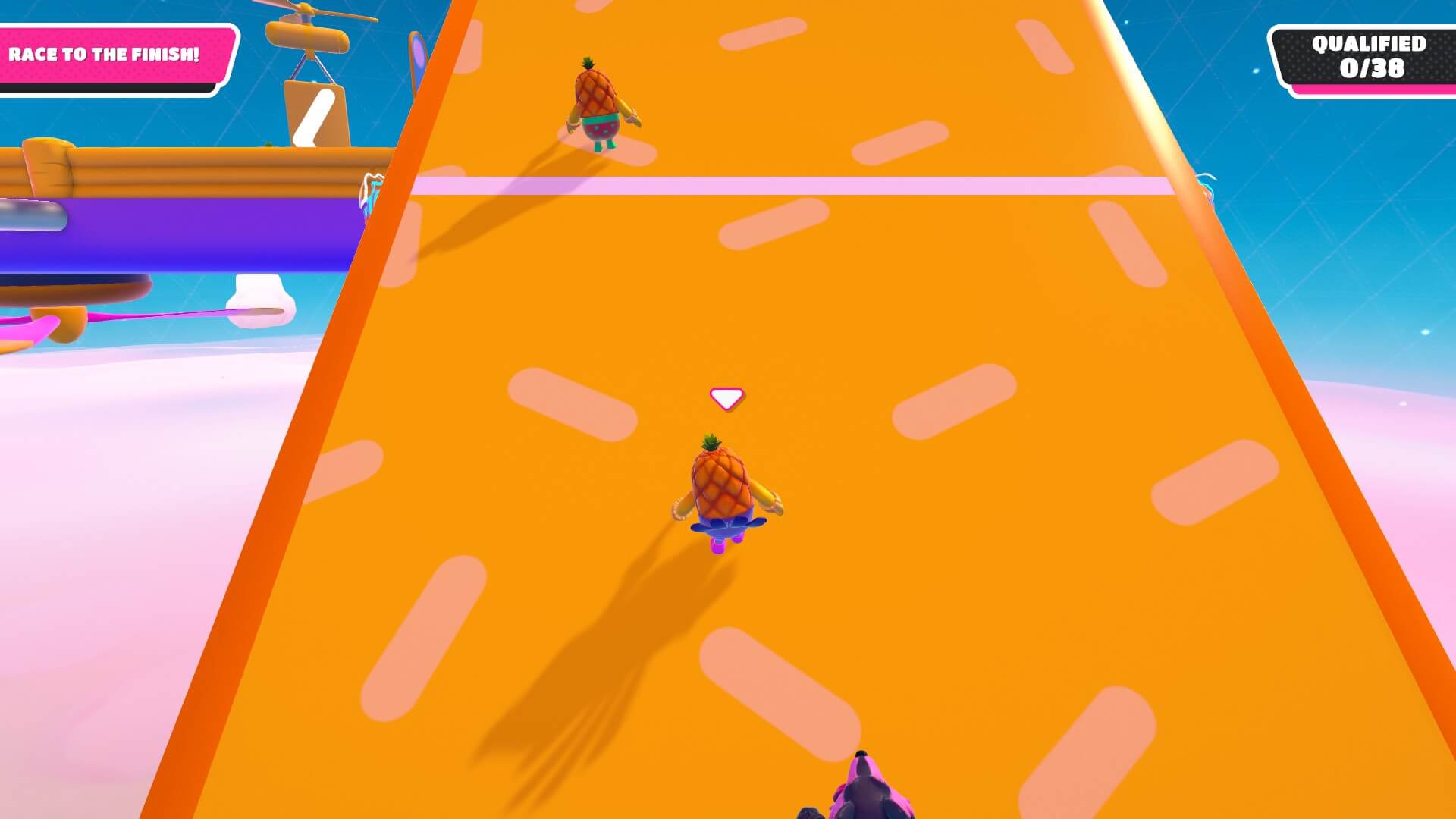 Since there are 25 different challenges each played out across multiple maps, here are some general tips for a few of them. I might make more guides for each one individually at a later time. 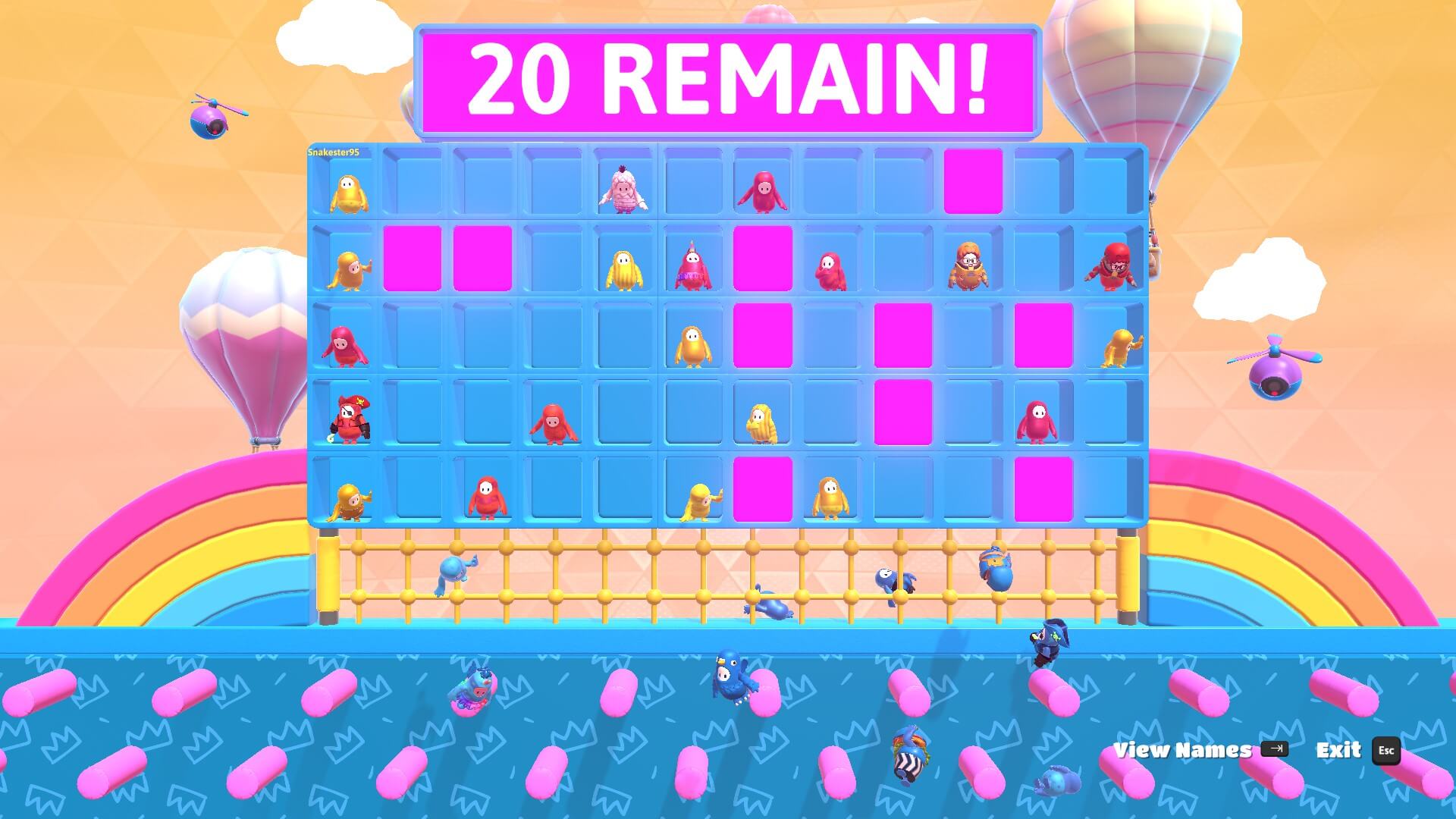 As goes with any battle royale game, it’s important to remember that a lot more people are losing than winning. For every 60 players that go into a Fall Guys match, only one player is coming out a winner. Certain maps and mini-games have areas that simply rely on luck and it’s nothing against your personal skill. Or you might play a team game where two of three teams completely focus you. Or perhaps one player is determined to grab you and not let you progress forward.

This is why it’s good to remember that you can exit the second you lose and still get your rewards. If you want to spectate the match, that is still an option, however. But, if you want to get right back into the next match, exit out once you’re eliminated. Fall Guys will warn you if you’re leaving too early, so don’t worry.

Tip 9 – You Can Climb Certain Walls 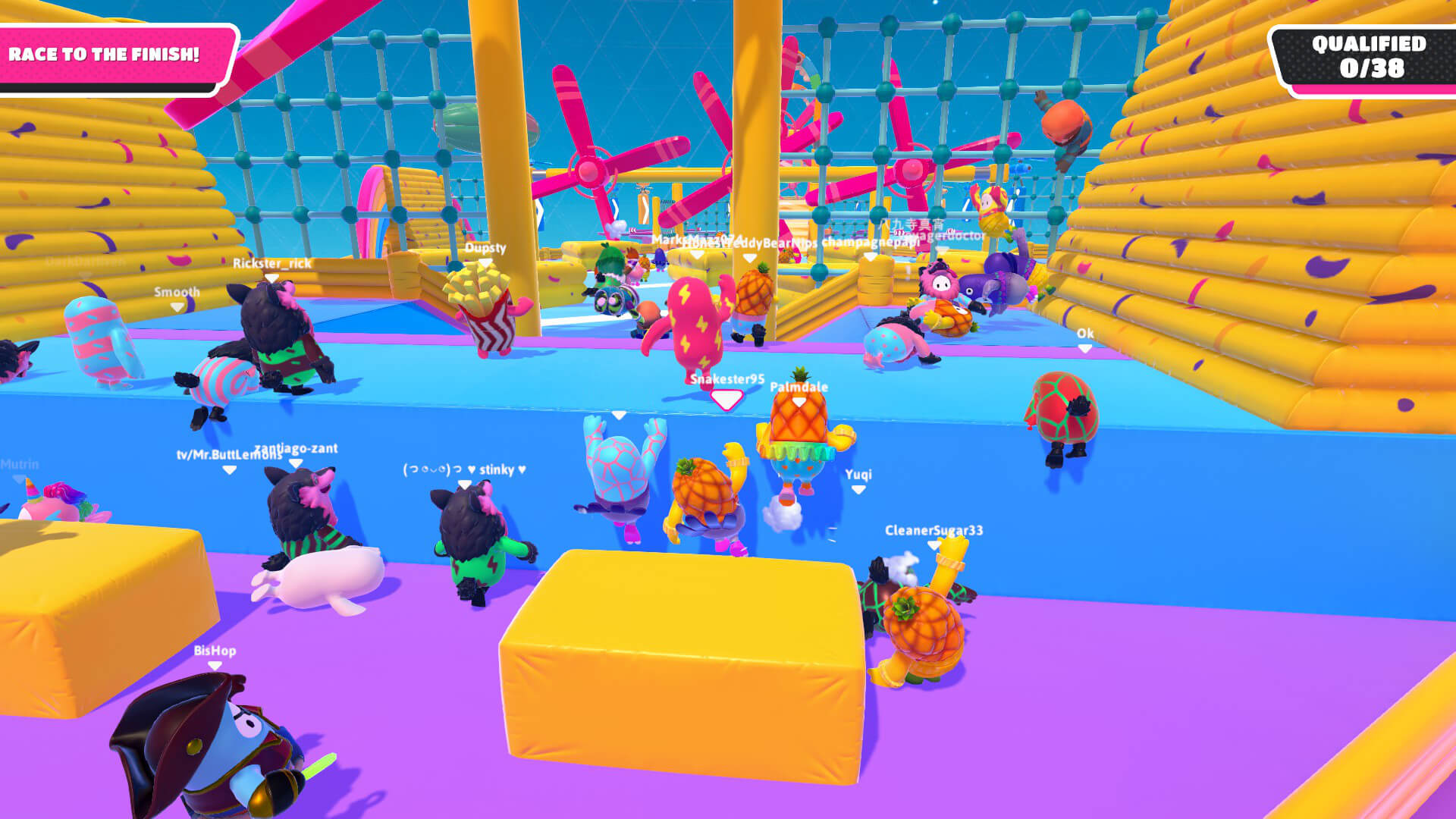 The Whirlygig is a race map where you can climb a wall shown in the screenshot above. This is usually the quickest way so long as you’re not getting dogpiled on by every other player. If that happens, try to get out of the way and climb from the side instead. I’ve tested climbing on other walls and haven’t had any success. So it might only be possible on The Whirlygig map here.

Tip 10 – How to Sabotage Other Players 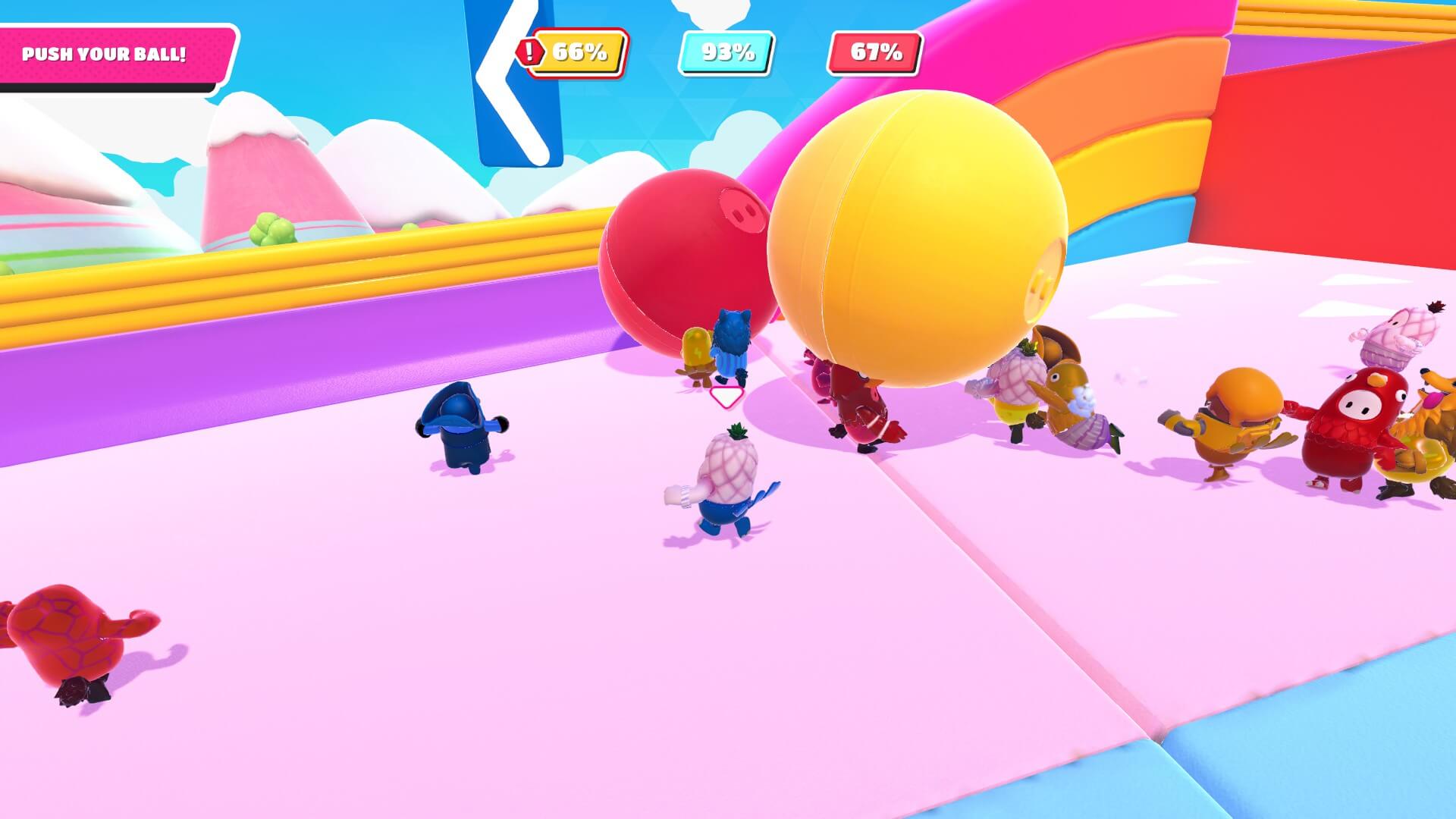 Almost every Fall Guys match I’ve had, there were players waiting near the finish line with a mischievous goal. They were waiting there to grab anyone coming to the finish line and prevent them from qualifying. Be careful of players doing this and do your best to avoid them. However, if you’re feeling roguish, there are a few tricks to knock out players.

My favorite way to disrupt others is to do a quick grab right before they make a jump to another platform. This is enough to reposition them and often throw off their timing. As you become more experienced and knowledgable of the Fall Guys maps, you’ll notice opportunities. But even if you’re not a malicious player, you’ll learn where the evil ones wait to attack.

I hope these Fall Guys tips and tricks help you get started and closer to that crown victory. For more information regarding commonly asked questions, we have a guide full of answers here.