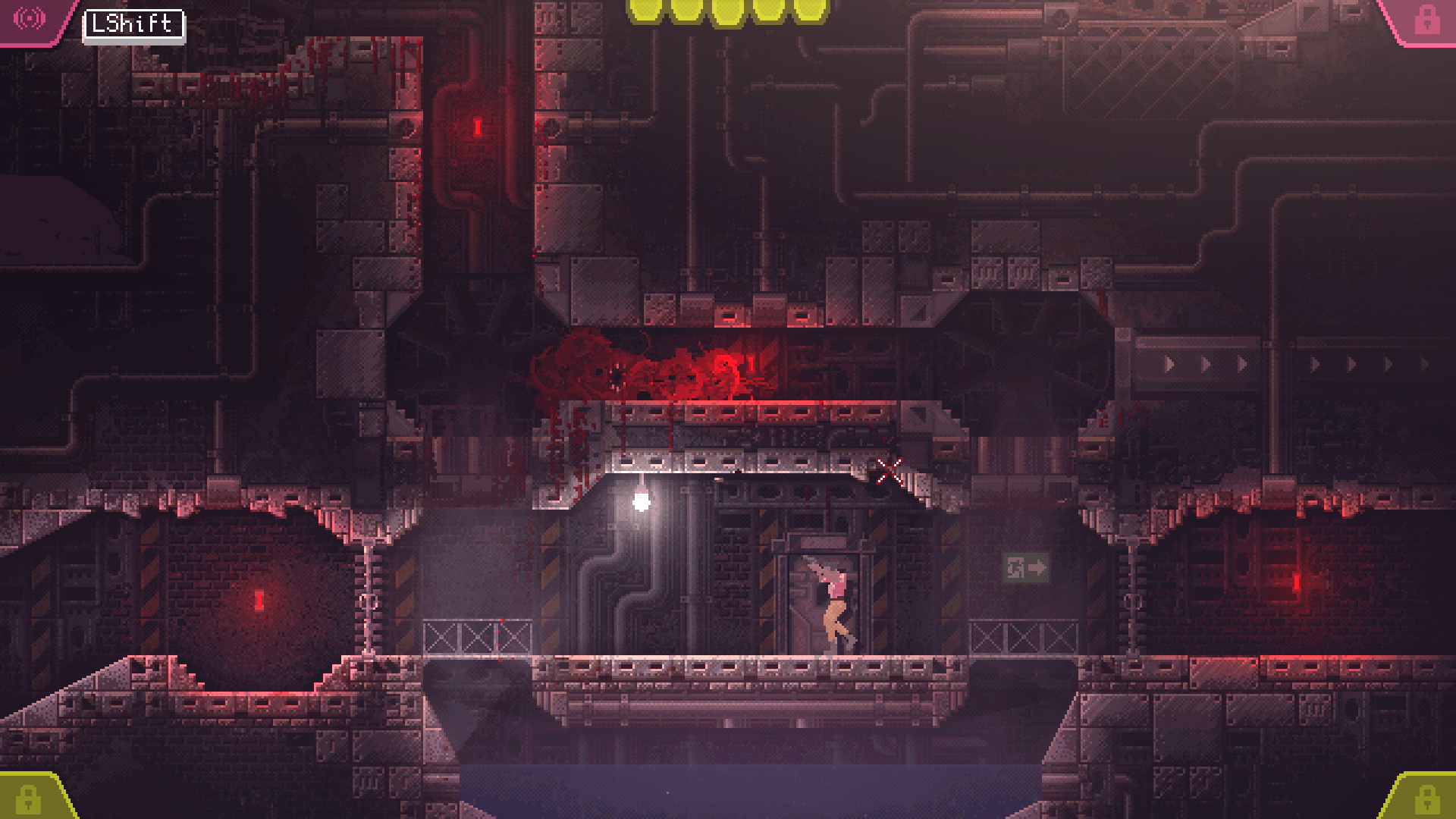 If you’re playing the creepy horror game Carrion, we’ve got the answers to some of the most common questions people are asking. Since it only just released today, I’ve also tossed in a few other tips/answers to questions you may have eventually. Before you wander down below for answers, be prepared for spoilers regarding mainly creature abilities.

How to Use the Cobweb Ability 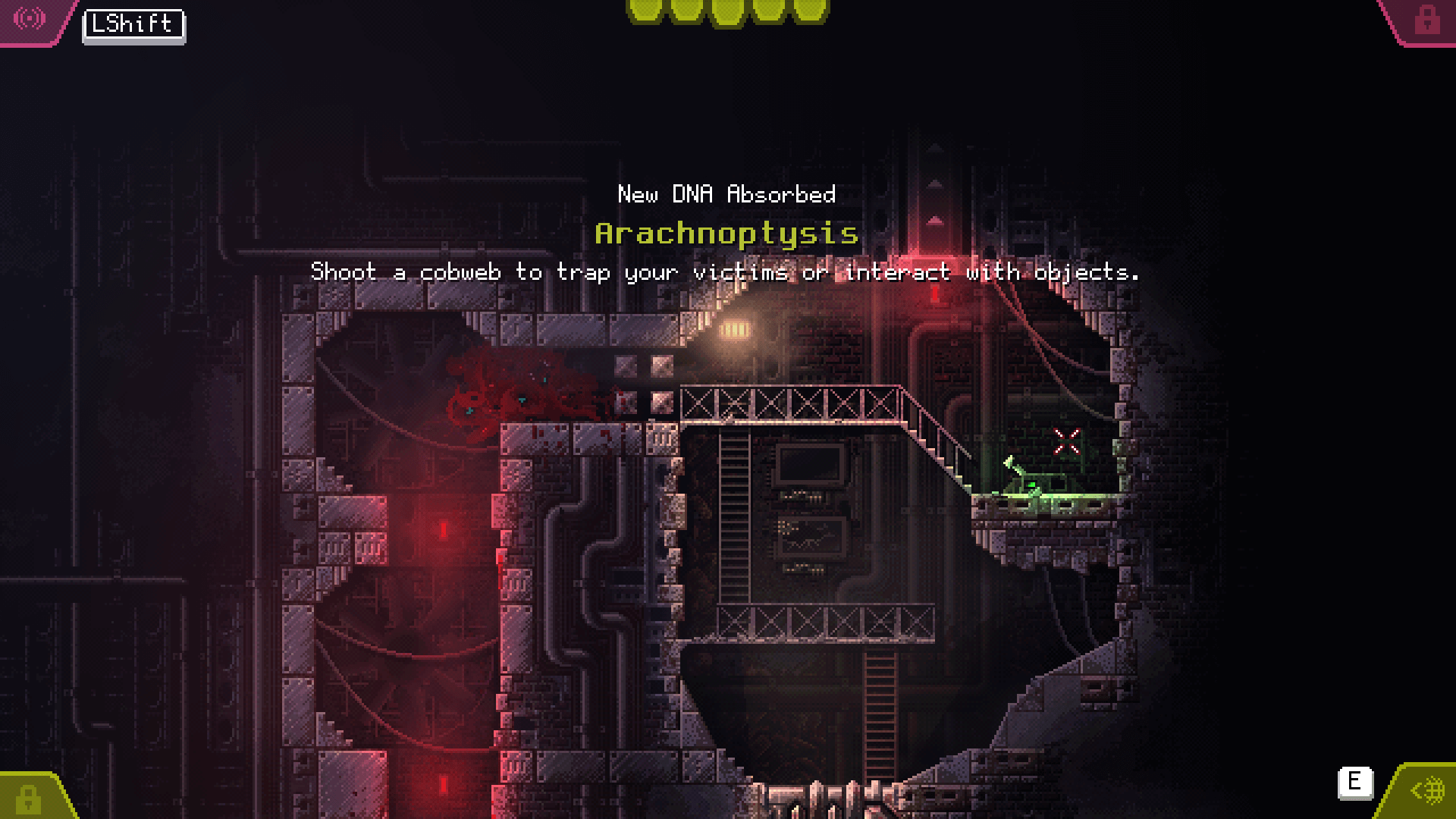 If you’re not sure how to use your new cobweb ability, take a look at these tips below.

So you’ve got your first ability in Carrion and you’re ready to dig deeper. But how do you use the cobweb ability also known as Arachnoptysis? By default on PC, you press the E button to shoot a cobweb toward whatever you want. When this ability is first introduced, there’s a wall gap where you can shoot the cobweb at a lever to push it. This is shown in the screenshot above.

You can use this cobweb ability the same way to also push switches so long as you’re pushing, not pulling. And if you’re looking to use it against humans, that’s also an idea. While it can kill humans, it’s not perfect and may only knock them down temporarily. There’s another creative use for it against a tough enemy further into Carrion. We’ll keep that a secret for now.

How to Break Wooden Barricades

Carrion plays similar to metroidvania games in the sense that you don’t start with everything to progress through the game. In this case, you can’t break wood barricades until unlocking the charge ability. This is an ability exclusive to your larger form for charging through barricades to break them. This doesn’t consume energy or anything to use it. It’s also great against humans hiding behind doors.

How to Get Past Lasers 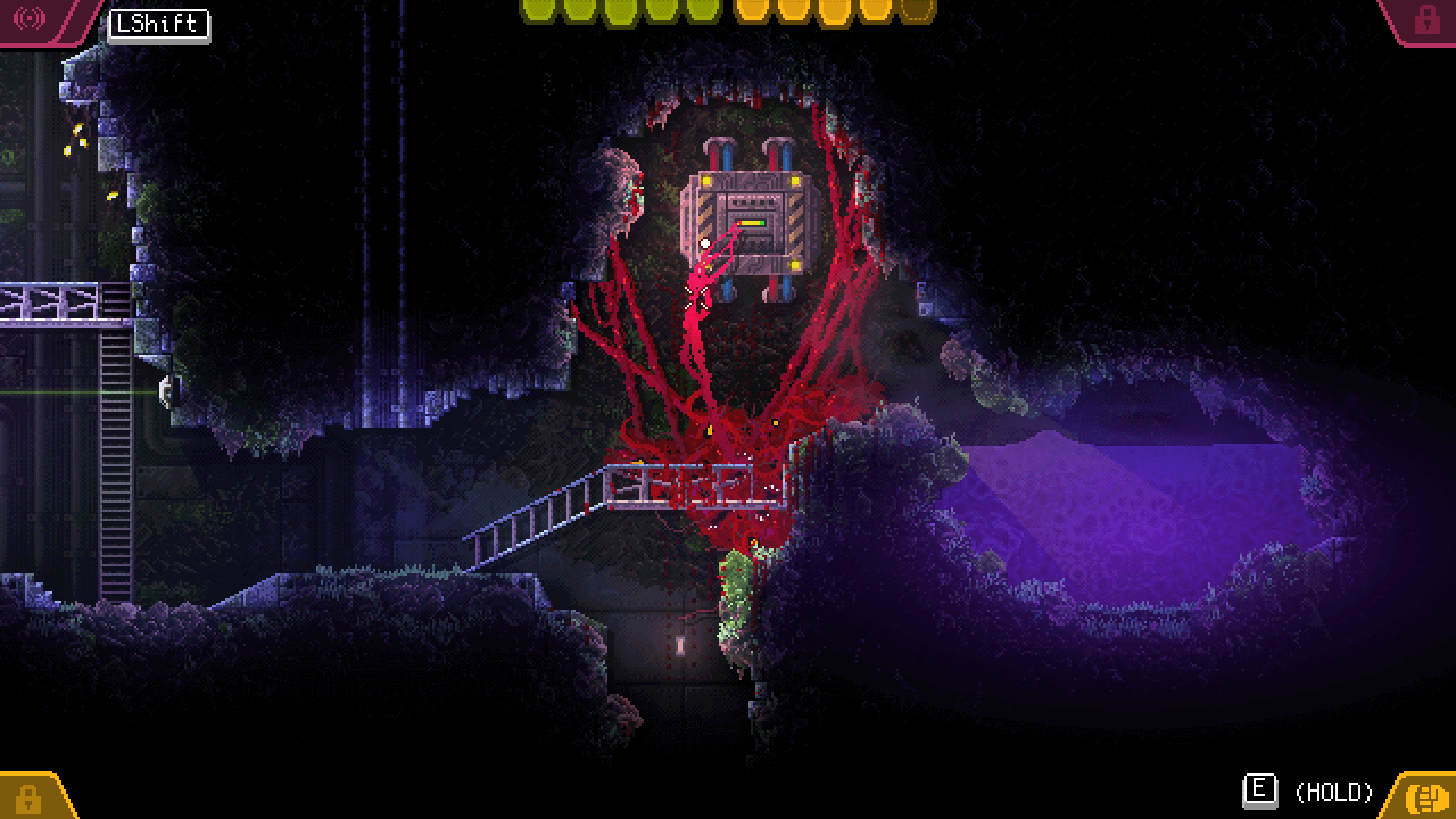 The power panel in this screenshot gives you power for cloaking past lasers.

If you’re not sure how to get past lasers, don’t worry, it’s relatively simple. Certain areas make you feel like it would be connected to the power panels, but it’s not. To get past lasers, you need to unlock the Cloaking ability for your smaller form/size creature. Once your blue energy bar at the bottom left corner is full, you can hold Q (on PC) to go invisible and sneak past lasers. Just be careful, it drains quickly while being used.

If you’re not sure how to get energy for your cloak ability, you just need to zap yourself at a power panel/generator. First, remove the outer panel and then grab it with your tentacle. This will zap you full of energy and then the panel will power back up shortly afterward.

How to Change Abilities 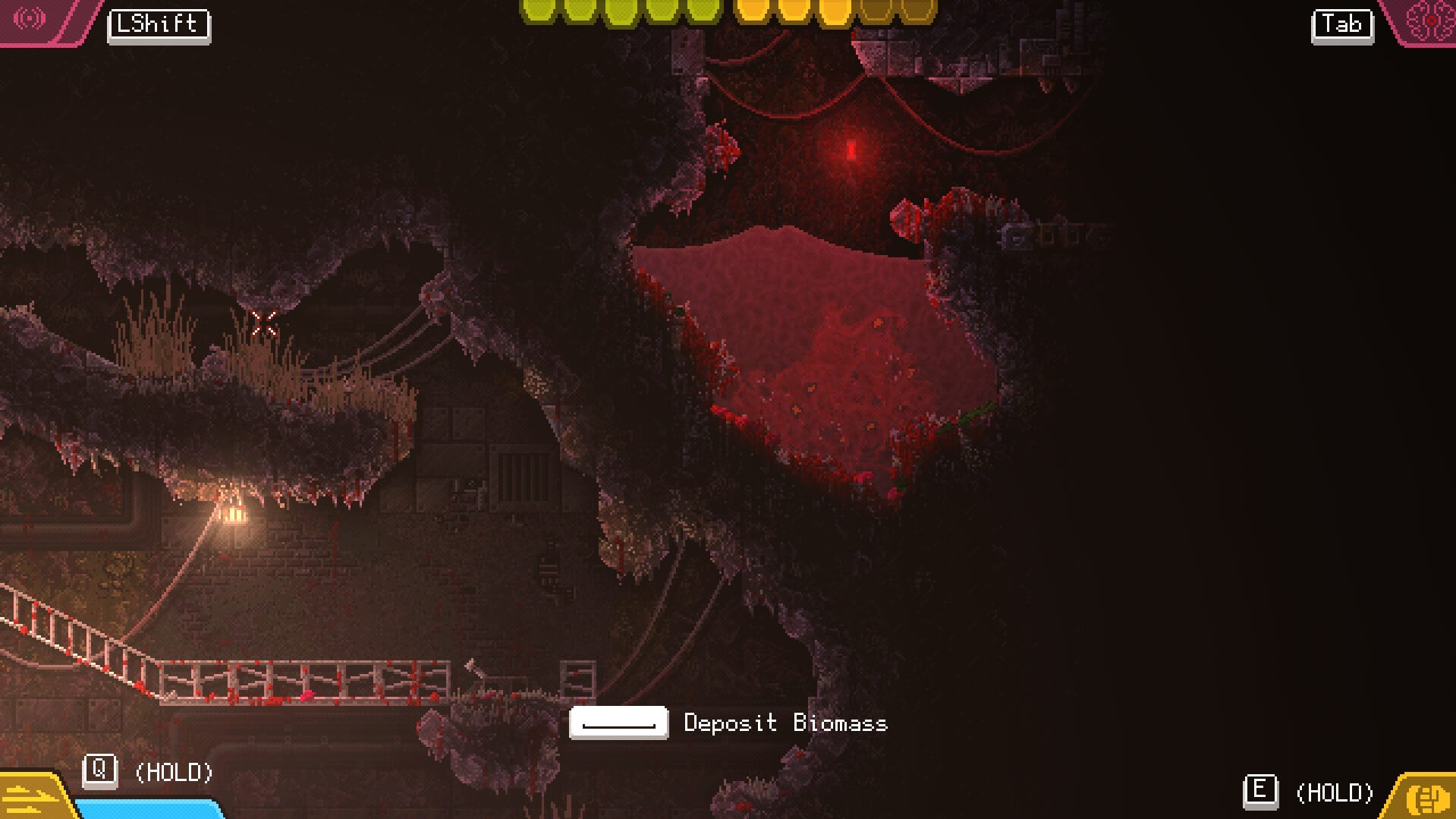 Once you’ve unlocked multiple abilities, you can change them by switching forms. One way to do is if you “Deposit Biomass” in a red pool of water.

Knowing how to change/switch abilities in Carrion is important because certain areas require different methods to progress. Your abilities are tied to the form you’re in or size of your creature. Once you’ve progressed a little into Carrion, you’ll notice there are two health bars at the top center of your screen. The green one represents the smaller form, while the yellow represents your larger form.

Certain abilities are useable regardless of your size, while others require you to be one or the other. If you want to change from your larger form to the smaller one, you’ll need to find a red pool of water where you can “Deposit Biomass” to become smaller. This may work in purple water as well, I can’t recall. Otherwise, get hurt by humans and that will reduce your size too. So long as you have enough biomass/health, it will give you a button prompt to deposit biomass when in red water.

If you need to become larger, you can either eat humans or any biomass you’ve dropped in red pools of water. Also, you can save at a hive to regain all your biomass and have full health.

How Long to Beat?

If you’re wondering how long it takes to beat Carrion, players seem to beat it on average around 3 and a half hours. This is according to the website How Long to Beat here.

How to Save in Carrion 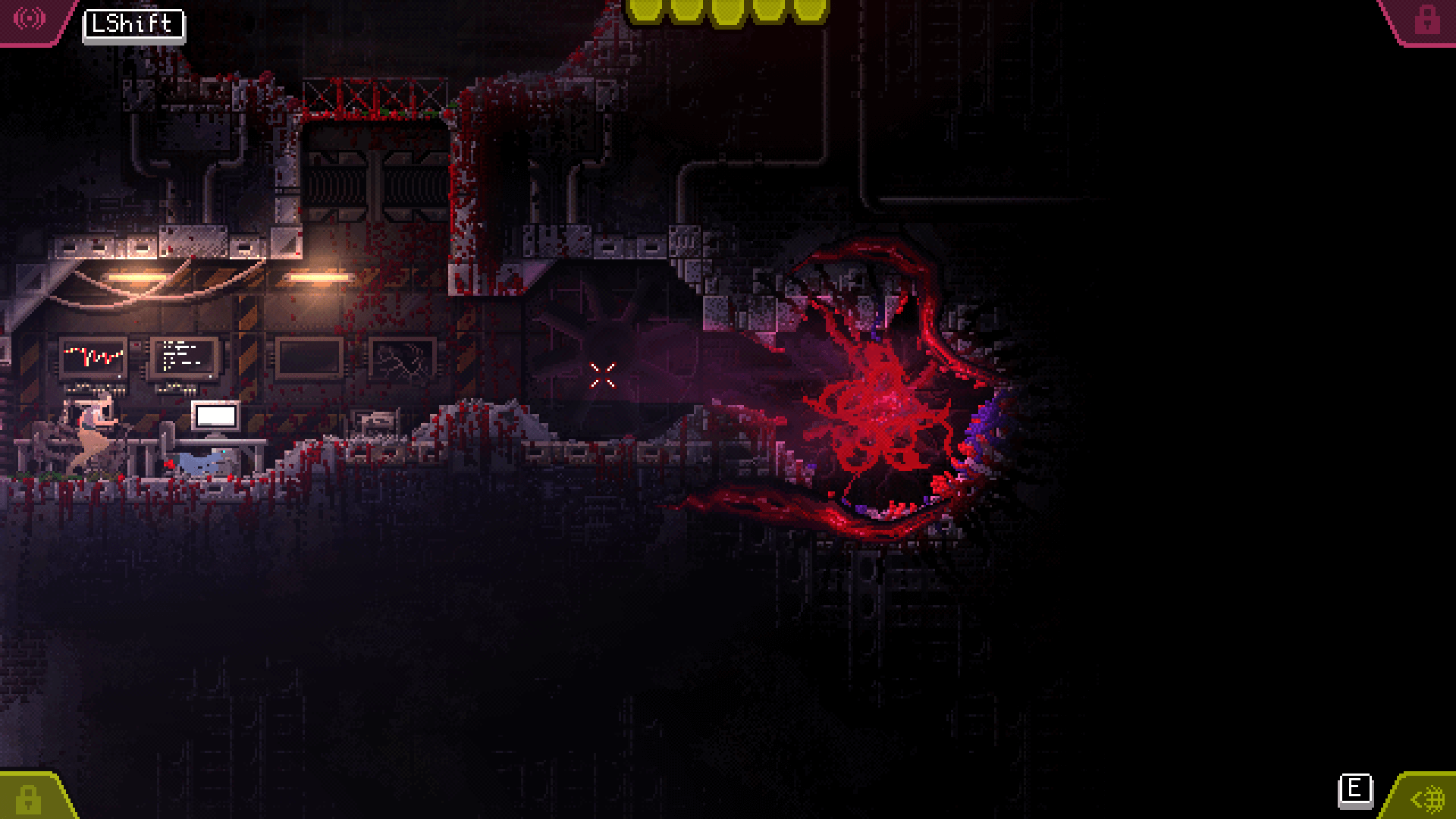 Saving at most hives will also heal you back to full health.

How to Find Hives

This ability is on the left shift button by default if you’re playing on PC.

How to Heal or Gain Biomass

As mentioned in previous questions/tips, you can heal by eating humans or saving at most hives. It doesn’t matter if it’s a hive you’ve already made or a new one. Saving at the majority of hives will completely heal you.

How to Get Past Harpoons 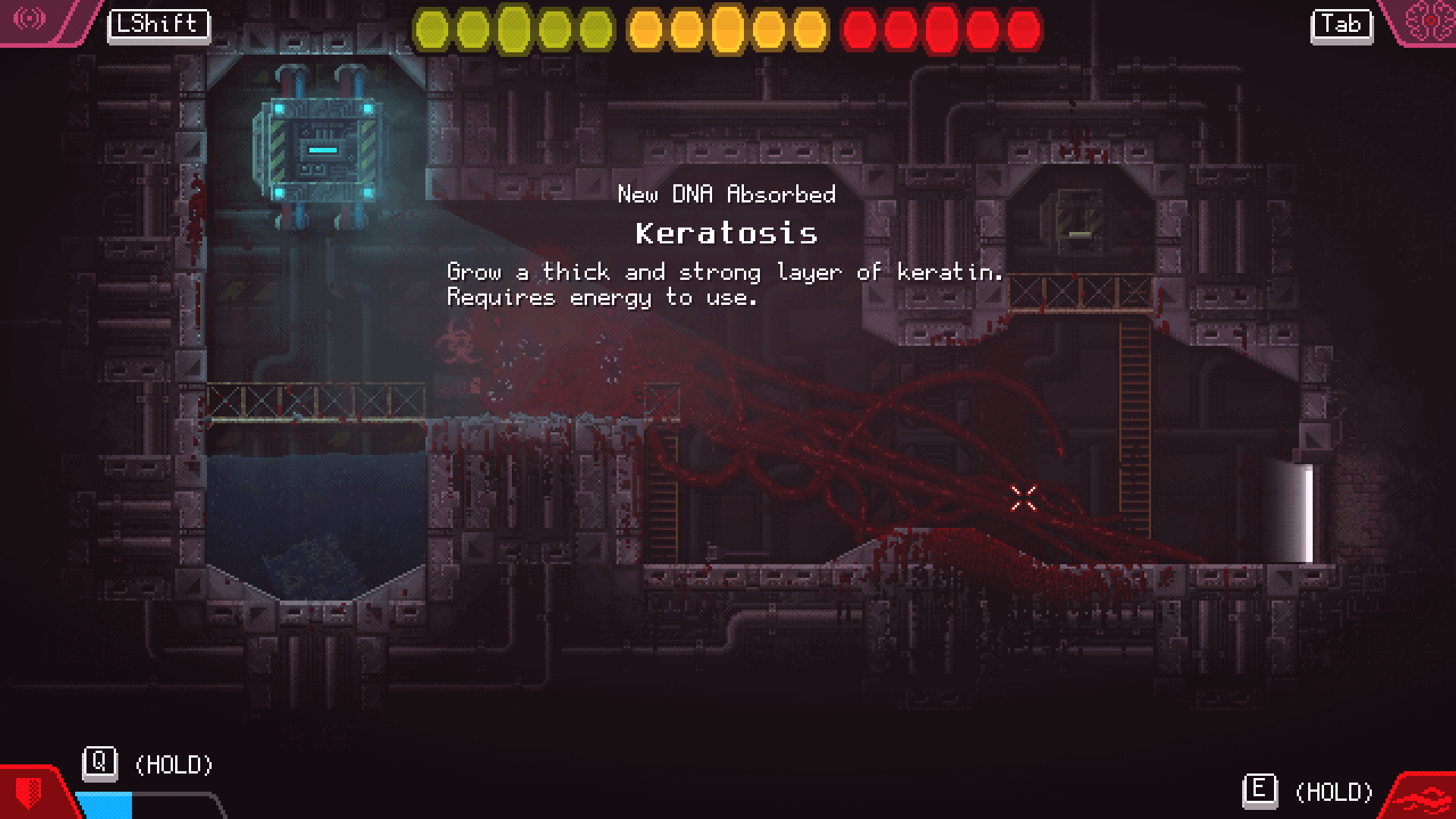 The Keratosis armor is great for tough situations while in your third form.

If you’ve run into exploding harpoons that attach to you when near them, you know how annoying they are. These will attach for a few seconds and then explode killing you regardless of how much health you have. The only way to combat them is to use a skill that gives you armor called Keratosis. You won’t get this ability until you reach the third form of your blob creature. Afterward, you can combine it with the explosive harpoons to break certain obstacles too.

If you have any questions regarding Carrion or you’re struggling at a part, feel free to ask in the comments below for help! And if you’d like to see our thoughts on the game, check out our review here.

Carrion released on July 23, 2020, for Xbox One, Nintendo Switch, and PC. It’s also available on the Xbox Game Pass at the time of this article being published.

how do i get past planks

You can't get past the plank barricades until you evolve to the second larger version of your creature. Once you do, you'll unlock the Charge ability which lets you break through planks.