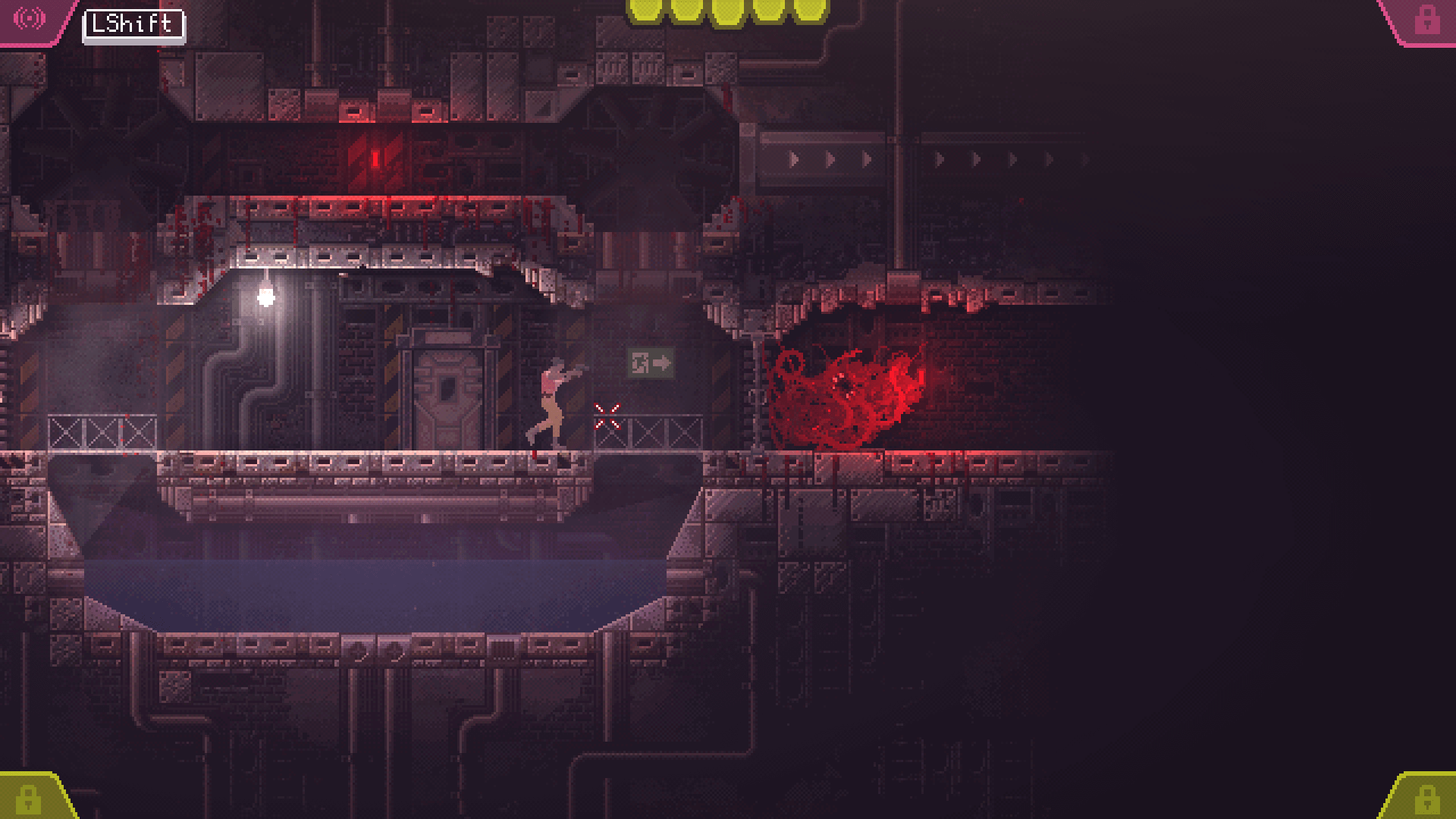 I’ve had my eye on Carrion for a while going years back to when I first saw a prototype on Reddit. Seeing how far developer Phobia Game Studio has taken Carrion and built it into this gross monstrosity is an incredible sight. The premise of this reverse horror game follows your blob creature rampaging through a facility filled with scientists. In an attempt to escape, slaughter your way out as you get stronger, bigger, and more deadly.

Take a look at some of my Carrion thoughts in this PC review below:

Controlling your creature along tunnels and massive rooms feels as smooth as can be. Movement is kept simple and doesn’t rely on walking along the floor or reaching out to grab the ceiling. You simply point where you want to go and your creature latches onto everything around it. By not making movement complicated or limited, roaming through Carrion’s world feels perfect.

Regardless of the environment, there’s always a unique way to traverse it. This is consistently important while dealing with tougher enemies as you get further into the game. Water doesn’t seem too important until you’re suddenly starving for it as you’re put on fire.

2 – The Progression as You Evolve is Pleasing

Eating your way across the facility and finding chemicals to evolve new skills is a pleasure. Every new skill and transformation is where Carrion excels. While certain skills are there to help you solve easy puzzles, they also unlock unique ways of playing. Spewing a bloody red tendril, through a dark vent system beneath someone, as you quietly slither into them for complete control is terrifying. And yet, sometimes my favorite strategy.

While other times, it’s just as satisfying to rampage through a hallway breaking everything in your path. What’s that, there’s someone with a gun on the other side of a door? Why not grab the door and fling it off its hinges right at them. There’s no correct way to play Carrion and that’s what makes it enjoyable. Clear a room without them knowing you were ever there or go in as violent as possible.

The only issue I ran into as my creature became more complex revolves around abilities being tied to your size. This often forces you to manage your size based on the mini-puzzles you run into. Fortunately, there’s a mechanic to deal with it, but it can be a minor nuisance to manage sometimes.

I wonder how this creature ended up in this facility and what’s really going on here. Maybe the scientists are experimenting with our friend and they didn’t do anything to warrant this torture. Carrion might be a horror game, but it makes me think if this creature’s situation isn’t all that far from the testing we do on animals today. All different types of media often joke that we would attack aliens if they ever came to Earth. And there’s already another movie in the works with this narrative called Cosmic Sin.

This is why I only kill humans in Carrion that are trying to kill me. There are tons of different people in this bunker who are running in fear for their lives. Perhaps I only look like a terrifying creature and simply want to be free. Is that so much to ask? Or, I’m actually a terrifying creature!

4 – The Metroidvania Elements Can Ruin Your Flow

Metroidvania games frequently force you to trek backward after unlocking new abilities so you can explore other areas. Fortunately, Carrion is a short game where this only becomes an issue for certain parts. As someone who blew through the game in one session, I didn’t give it much of a chance to confuse me. But for the one or two moments where I looked away for a brief minute, I already felt lost.

This is where the lack of a map hurts a game like Carrion and can easily break your rhythm. Despite not having a map, the developer still created a mechanic where you can roar to find nearby hives. Since a lot of the game revolves around creating hives to continue progressing, this helps defeat those problems.

5 – There’s An Odd Attempt at a Story

I could easily play Carrion without needing any sort of plot because of how strong the gameplay is. However, every so often, the developer throws in a memory segment where you wander the facility as a human. This feels like I’m playing an Assassin’s Creed game and slipping into an animus, but instead, the animus is the boring part.

Sprinting through the facility and randomly examining goo or searching for pipes to interact with feels pointless. Maybe I missed what they were going for, but it feels like a weak attempt at giving Carrion more background.

Overall, Carrion is an extreme delight to play and feels unlike any other game I’ve played in recent times. I highly recommend it because the action is satisfying alongside small puzzles that make you feel accomplished.

Carrion released on July 23, 2020, for Xbox One, Nintendo Switch, and PC. It’s also available on the Xbox Game Pass at the time of this article being published. If you’re already playing Carrion and struggling, take a look at our tips and tricks in this guide here.