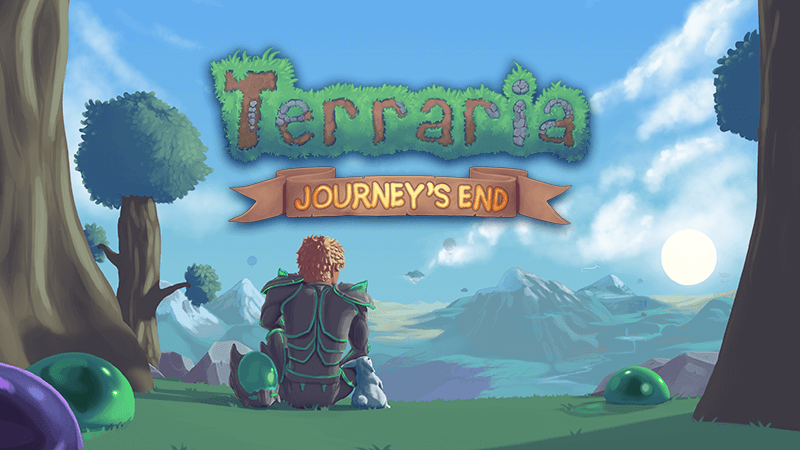 The final Terraria update everyone has been waiting for has finally arrived and now is the time to get a refresher with this guide. Especially if this is your first time venturing into Terraria with the Journey’s End update. These tips and tricks below vary from common knowledge to new information with the final update.

Tip 1 – What Terraria Difficulty Should You Choose? 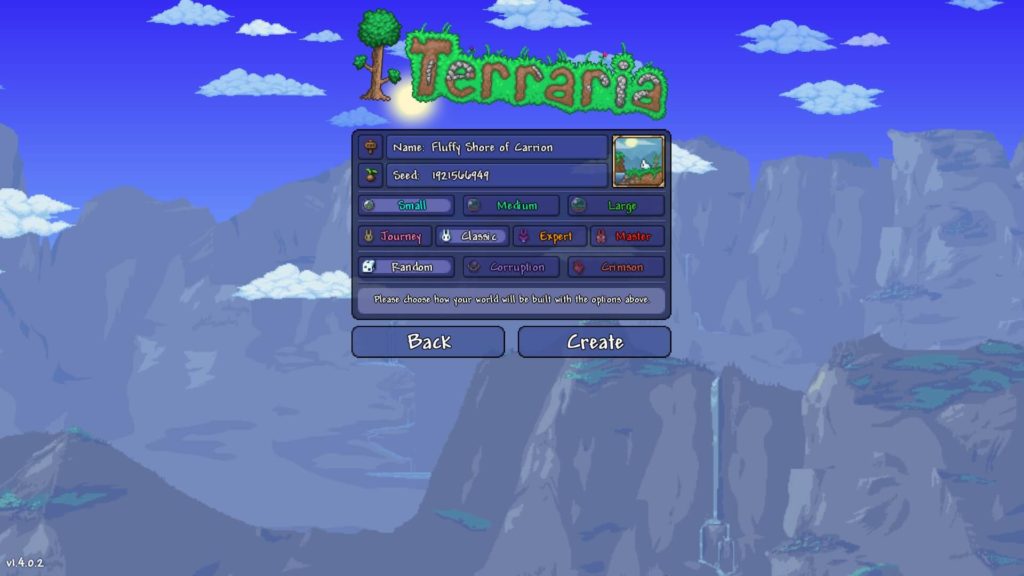 Knowing what difficulty to set your world to when first starting out can be tough if you’re not sure. If you want the classic Terraria experience, you’ll never guess which difficulty you should pick (it’s classic). Each difficulty rises in challenge by making enemies stronger in damage and health, with a few other tricks too. Brief explanations are below:

Tip 2 – How to Get Money Quick 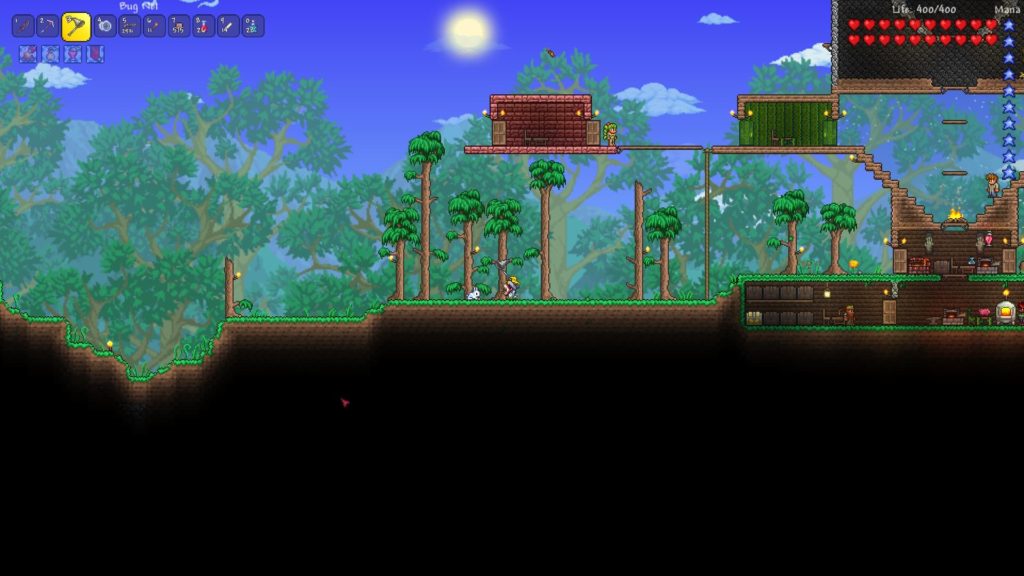 Getting started early on is easy when you can catch animals for money and food.

If you’re wondering how to make money fast in Terraria, the best way early on is to catch bugs and animals with a Bug Net. The Merchant NPC sells Bug Nets for 25 silver and this becomes a great source of money when you’re first starting out. Before you can get a Merchant, you need to gather up to 1 gold coin, which can be gotten from searching chests on the surface.

Another great money maker that relies on pure luck is breaking pots and having a Coin Portal appear. These drop anywhere from 5 to 15 gold, increasing with further progression into Terraria.

Tip 3 – Getting Your First Grappling Hook 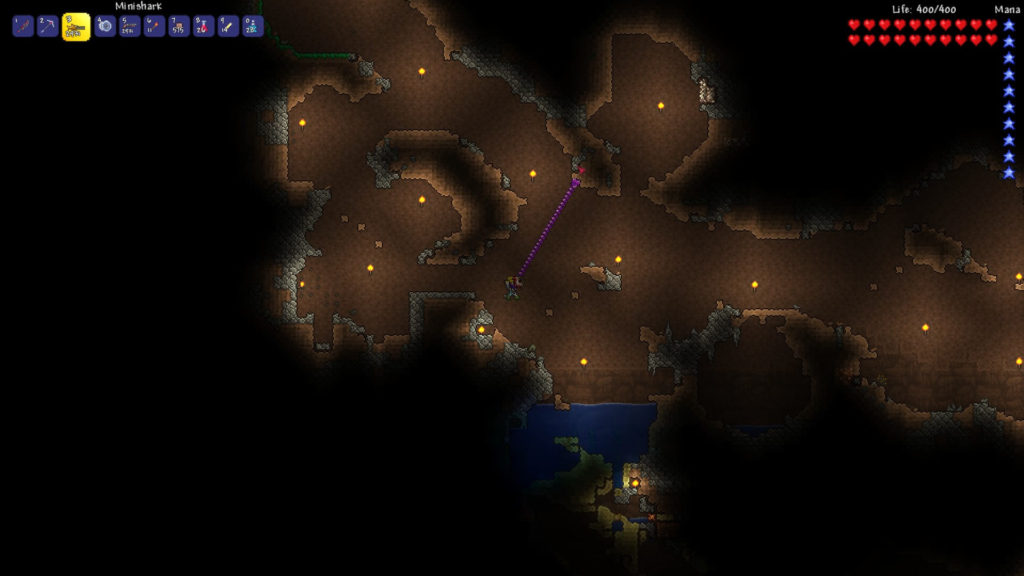 Caves immediately become easier to explore once you get a grappling hook.

Grappling hooks have always been a game-changer in Terraria because of how much mobility they give you. Compared to the past, gems are easy to find now and are great for your first grappling hook. All it takes is 15 gems of one type to create a grappling hook at an Iron Anvil.

Keep an eye out for a pulsating color underground like purple, blue, brown, etc. These are clues for a patch of gems. Also, the only tiles they appear inside are stone blocks. Gems will appear alongside tiles instead of inside them too. Gems like Amethyst, for example, will have purple dots inside stone blocks they’re in. It’s also possible to find mini areas with a special background that has gems around the outer tiles. 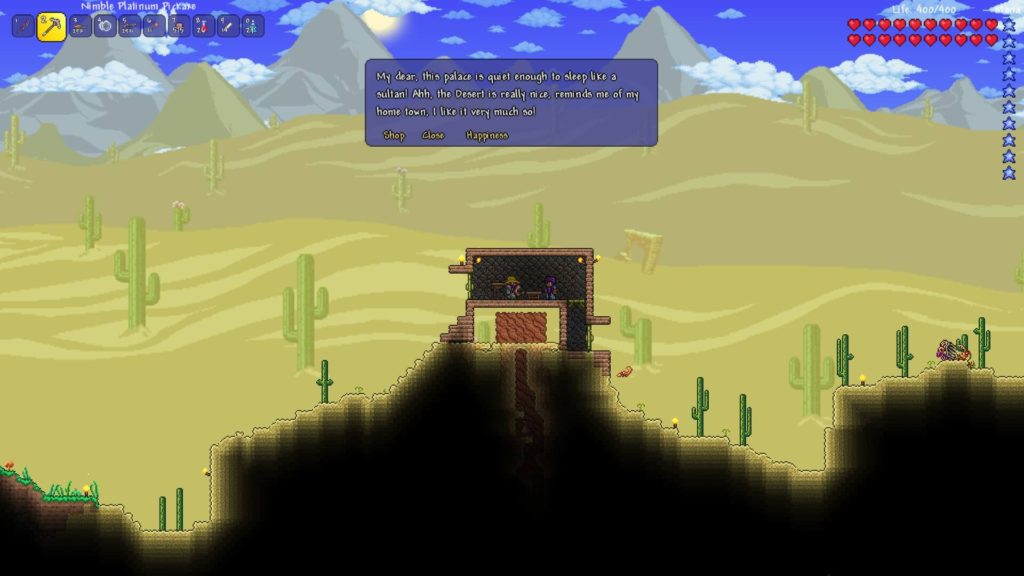 Simple houses in Terraria get the job done!

Creating homes for unlocked NPC characters is easy as it only requires a table, chair, light source, and background walls. On top of this, Journey’s End threw in a twist with a new Happiness system that manipulates NPC prices. Certain characters prefer different biomes, not feeling too crowded, and like or hate others too.

If you’re struggling to make your NPCs happy, try talking to them and clicking the “Happiness” option to see how they feel. They’ll usually give hints as to why they’re unhappy or if they’re happy. When you go into your inventory and click the “Housing” button above your vanity slots, it will show NPC banners for each room they’re attached to.

NPCs that are happiest will have a gold brim outline around their banner. If you’re struggling with your house not being valid, this is likely due to one of the above reasons. Otherwise, if you click the Housing button, then the question mark, and click a room, it will tell you if it’s suitable. If it’s still not valid, the game will tell you why in chat.

Tip 5 – How to Get Better Armor in Terraria 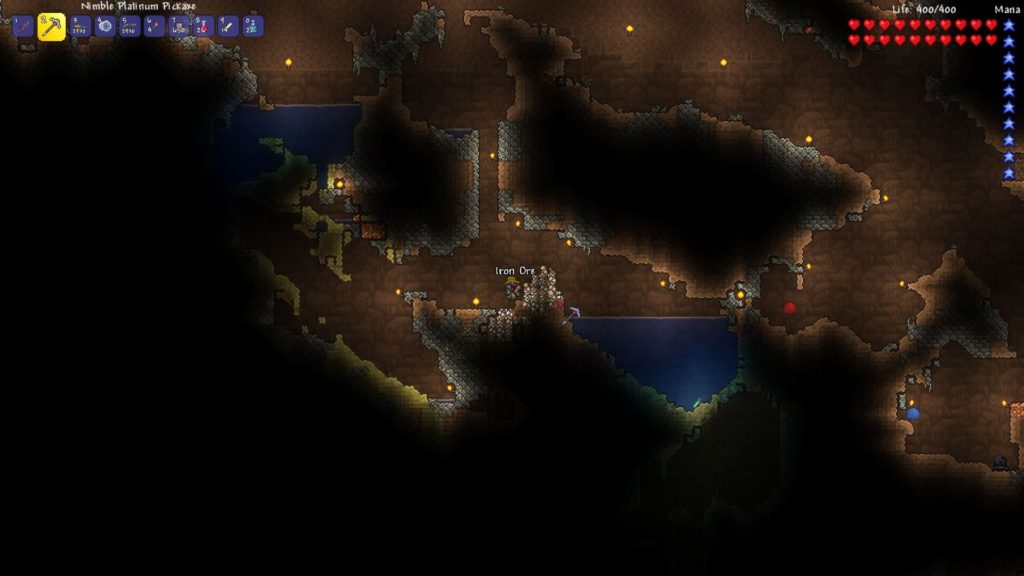 Make sure to dig all ore you come across when you’re still trying to upgrade your armor.

Getting further in Terraria requires upgrading your armor and that can be a challenge at times. The best and most reliable method is mining ore underground to smelt into bars. Each world has a few unique types of ore that others might not have. However, they all progress in a certain order advancing in tiers. For example, copper armor and tools upgrade to iron equipment.

Accessories found in chests and dropped by enemies are also a good source of defense depending on their rolls. If you want to get creative, my next tip below explains how to find types of armor you don’t already know about. I always recommend the Jungle armor if you feel like surviving the Jungle biome. 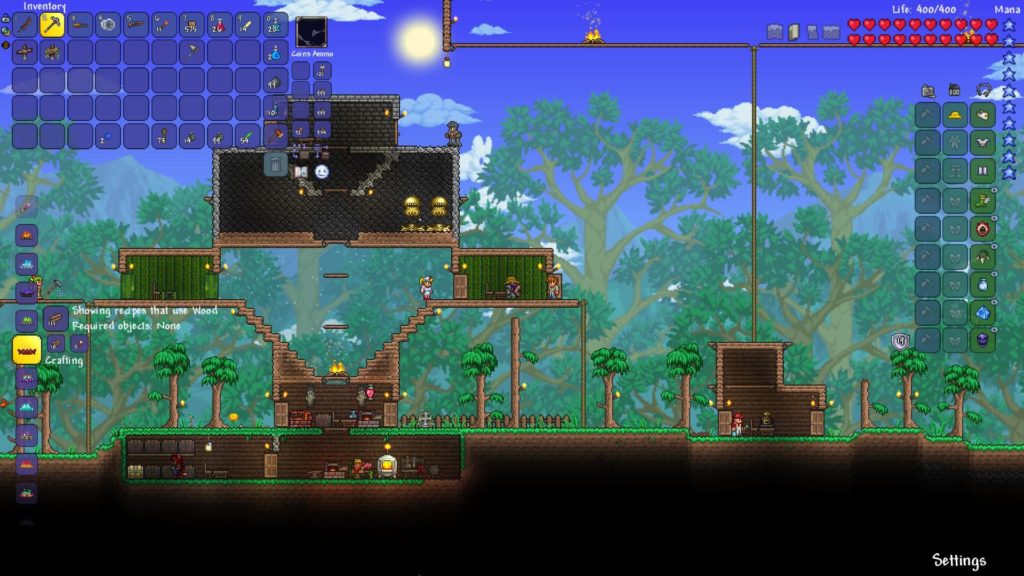 The Guide is great for discovering new and useful recipes without having to look online.

The Guide NPC is the first one you start with regardless of whether you have a room built. The reason they’re extremely helpful despite not selling anything is their crafting mechanic. By talking to the Guide and clicking “Crafting”, you can add any material to the bottom left corner box to see what it can be crafted into.

This is a great way to learn new recipes and often odd uses for items too. If a material won’t fit in the box, it likely doesn’t have any recipes 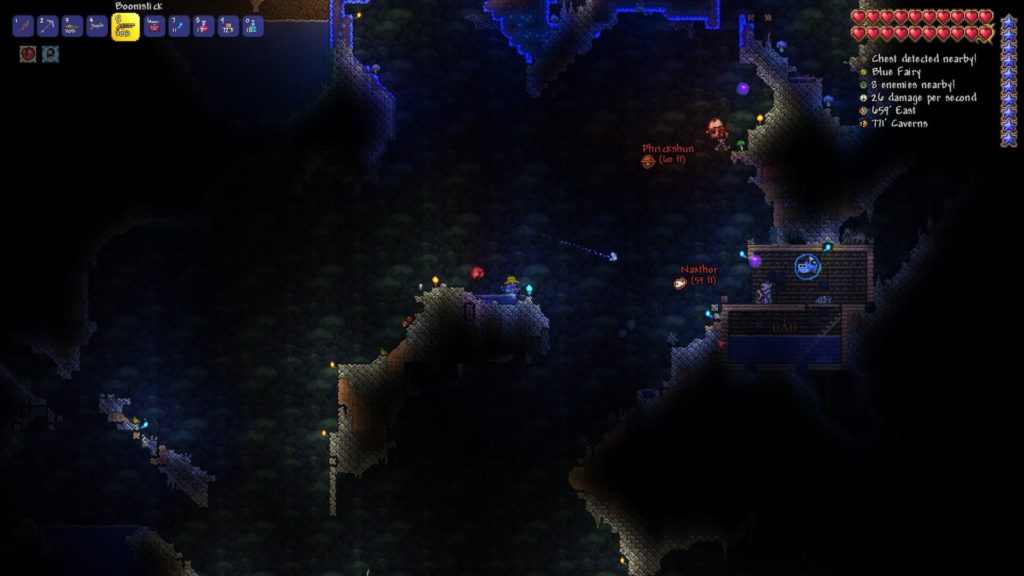 Keep an eye out for bright fairies of all colors that are around to help.

Fairies are a new creature added in the Journey’s End update that provides a helping hand. If you ever see a blue, pink, or green fairy, follow them to whatever treasures lie ahead. You’ll find them underground every so often and they’ll lead you to treasures like Life Crystals, chests, ore, and special plants. 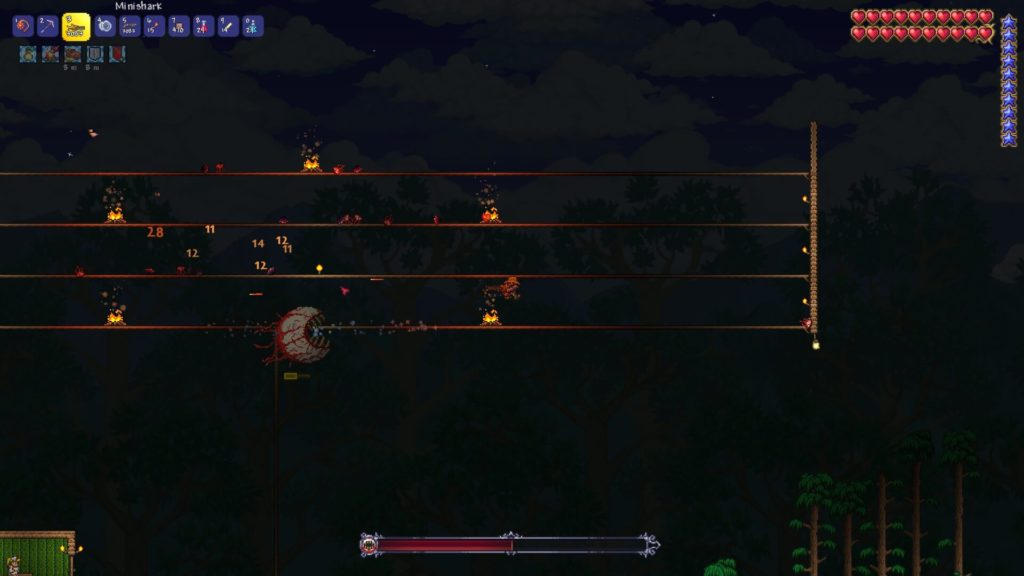 Boss arenas as simple as the one in this screenshot can make a big difference.

It’s important to prepare for boss fights as best as you can. Whether that’s stocking up on potions, ammo, or creating a giant arena for fighting a boss. The screenshot above gives a brief idea of what goes into creating a boss arena, especially against the Eye of Cthulhu. While every boss has its own unique way of fighting that may require different strategies, there are still some basics to know.

As explained in Tip 8, you’ll want to get as many passive buffs from furniture nearby. These grant permanent buffs to your health, defense, health regen, etc., without needing to consume food or a potion.

The other important part of building a boss arena usually revolves around platforms, regardless of the type. These are so you have a flat surface to run back and forth without worrying about uneven terrain. The multi-layered platforms in the screenshot above are so you have room to move vertically.

Personally, I use a basic arena design for most bosses in Terraria. However, you’re bound to find more advanced strategies online that may help you better. Especially if you’re playing on a challenging difficulty like Master. 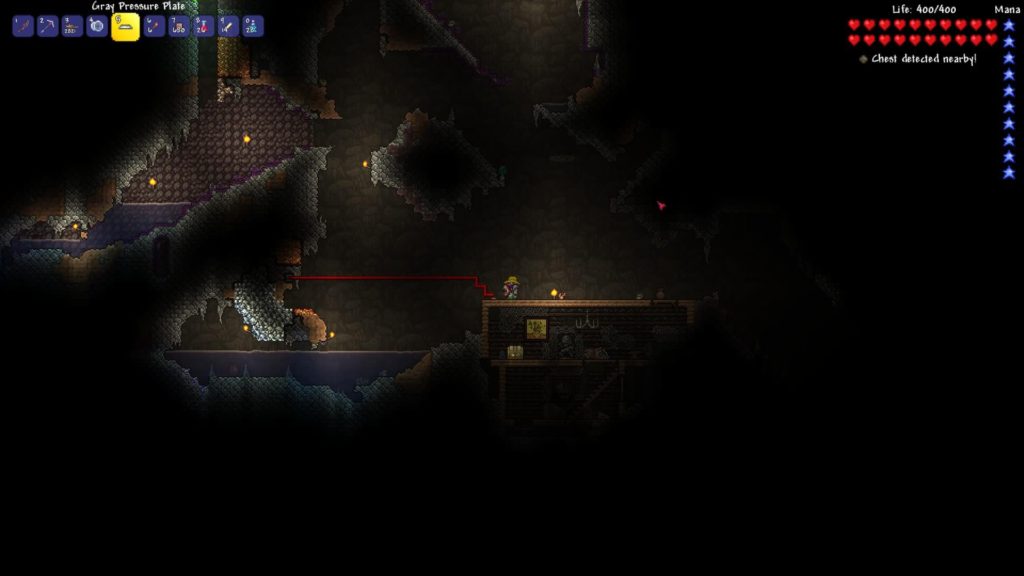 The underground caves always have traps lurking in the dark!

The underground world of Terraria is where the game truly opens up. As you explore deeper, you’ll come across new biomes, creatures, and often valuable items that make you stronger. While that may intrigue you to dive underground immediately, be prepared for traps lurking in the dark. One might say the darkness is the worst enemy of all when you’re first starting out in Terraria.

Some traps are exclusive to certain biomes, like the Rolling Cactus added in the Journey’s End update. This is a boulder unique to the Desert biome that you’re bound to get caught off guard by. Regardless of the trap type, it’s important to know that most traps use a wiring system to trigger. One of the most common traps you’ll encounter is the Dart Trap, which uses a Pressure Plate to activate.

A neat trick for detecting traps with a wiring system is to hold an item like a Pressure Plate, for example. This will show all wiring as long as you’re actively holding it out.

Very informative! Really helped me with my play through.