Disintegration immediately appealed to me when I first tried the multiplayer beta back in January. The combination of FPS elements with a dash of RTS is something you don’t really see in other games.

The closest I get to that these days is leading a group of actual players in something like Squad or Hell Let Loose. Sometimes, however, you don’t want to deal with real people. Not to mention, the unique world and background of Disintegration lured me further.

Before we get into my thoughts for this review, let’s do a quick run-down of the story. Disintegration takes place in a dystopian future where humans are transferring their brains to robots to survive. While some people see it as a temporary solution, the big baddies in Disintegration known as the Rayonne have no intention of going back.

This is where your ragtag crew of human robots comes in to lead a revolution and fight back. Protagonist Romer Shoal leads his crew from the air via a ship known as a Gravcycle, in this universe.

1 – The Action is Excellent Once It Clicks 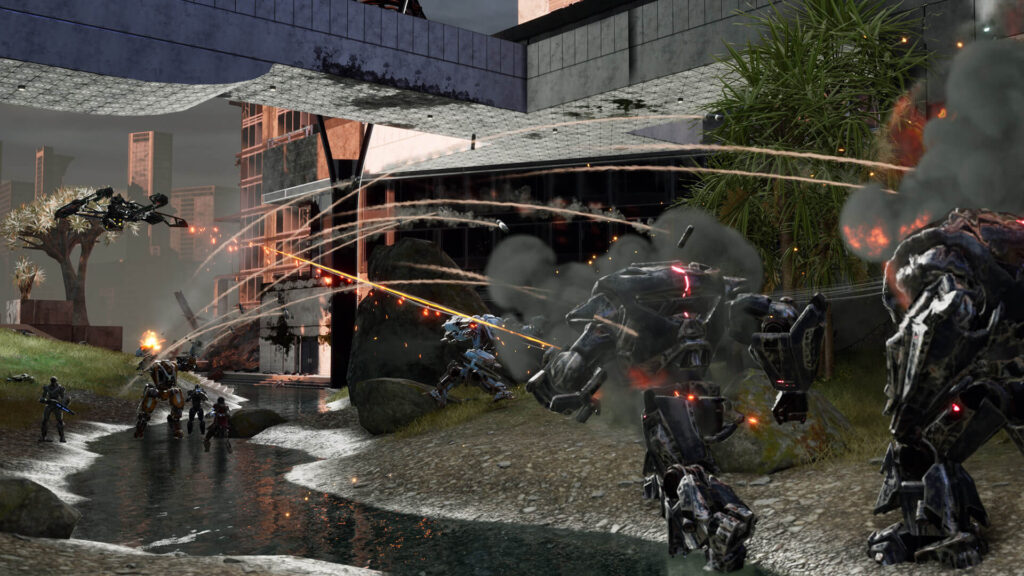 Maneuvering your ship alongside crewmembers below is great when it all comes together.

Once you get a good handle on Disintegration’s combat, you really get into a great rhythm. Since I played on a higher difficulty for my first playthrough, I had to constantly stay on top of my crew while making quick movements to stay alive. Ordering a unit to throw a slow field at a group of enemies and then another unit to eviscerate them with artillery is beautiful. This is what I love most about Disintegration, learning how to multitask the control of your character and crew efficiently.

2 – Beautiful Environments to Explore in Disintegration 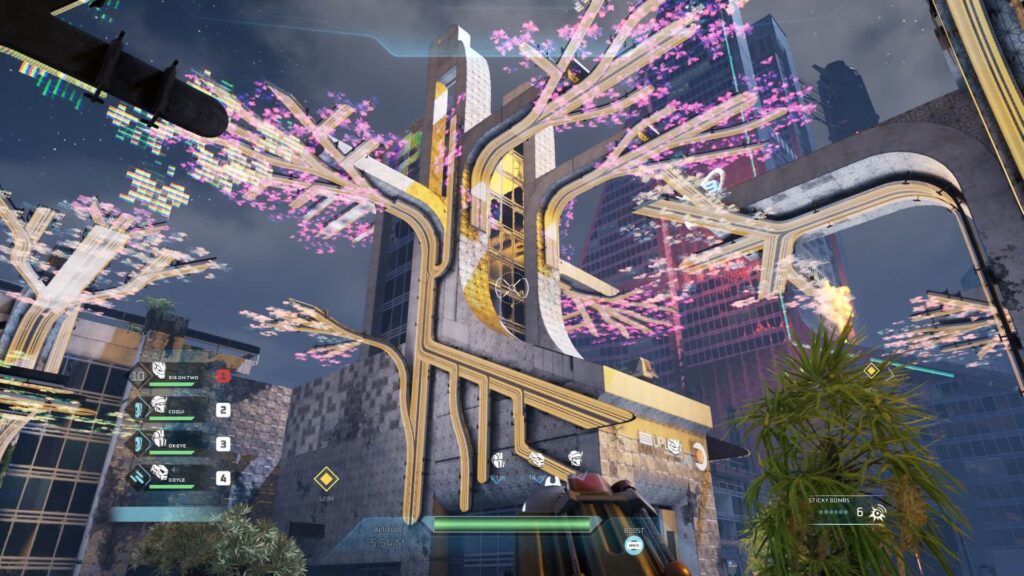 There’s a good variety of environments ranging from urban cities to forests.

Sometimes it’s easy to completely zone out while playing games and not admire the environment you’re in. That’s not the case for Disintegration if you take a moment to look around and see well-designed areas. The screenshot above is such a neat example showing a virtual cherry blossom tree. Disintegration has a nice mixture of environments between urban cities and dense forests in the mountains.

Every area has its own unique way of changing your playstyle if you plan to survive. Whether it’s ducking under bridges in the city or hiding behind narrow trees.

3 – The Story Moves Too Quickly For Characters to Develop 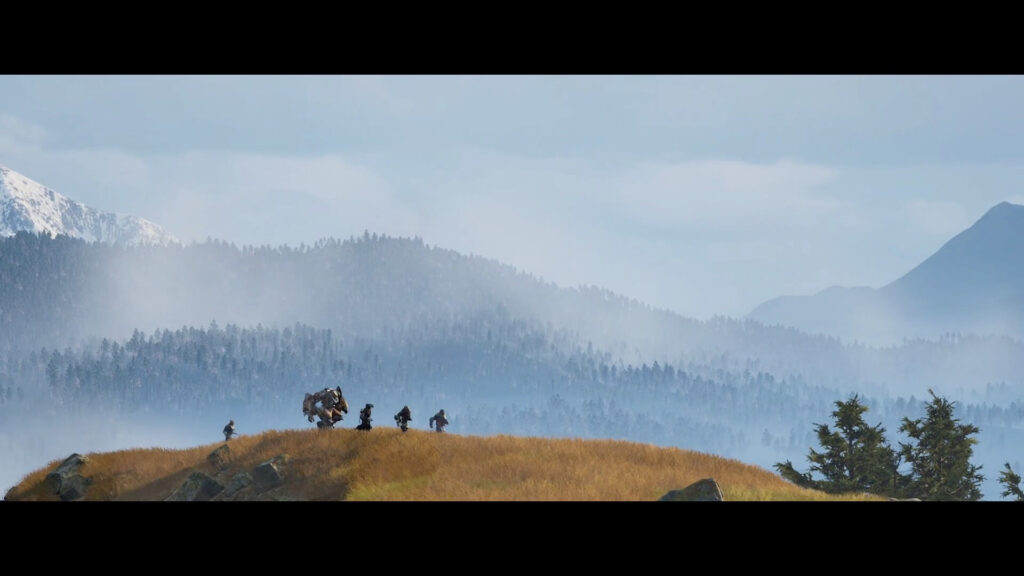 By the time I finished Disintegration, I realized there’s a strong story still hiding beneath the surface.

Despite Disintegration’s campaign lasting around 10 hours, it kills me how fascinating the story is, yet still falling short. My main problem is that the story moves too fast and doesn’t give you enough time to connect with the characters. I’m frequently checking if I missed something because of how quickly the story shifts from something dramatic to nothing. And it’s not that there’s no story or plot there, every so often, something captivating peeks through.

One of the characters is named 602 because thugs in his neighborhood used to call people by their apartment number to intimidate them. 602 is the biggest robot in your crew and I love the idea that he embraced this as his identity instead. More often than not, however, there are too many missed opportunities to develop characters further. I want the story to motivate me and reinforce how terrible the Rayonne are.

There are a few moments where the plot feels strong, but it loses momentum too quickly. On a side note, I was disappointed to see many creative Gravcycles and crews in multiplayer that don’t exist in the campaign. From The Muertos with a Day of the Dead look to The Sideshow with a clown aesthetic. These could have been neat side factions or gangs in the campaign. But, I understand if that wasn’t a part of the developer’s vision. 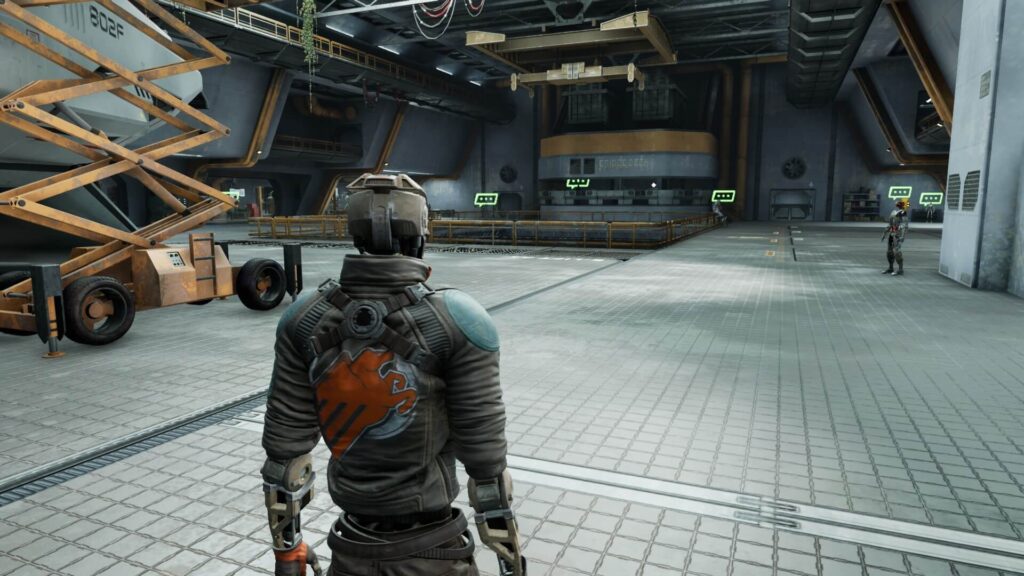 Maybe it’s because I finished Disintegration in a few sessions, but these in-between mission areas were more tiresome than anything.

This point in my Disintegration review segues from the previous thought about the story falling short. After every mission, you walk around a hangar or small area outside and talk to NPCs for a tiny bit of dialogue. The developer could have removed this entire area and I would have been much happier. I have no issue with there being a break from the action to explore the story further. But that’s not what this was.

Instead, it’s an area where you sluggishly drag yourself across a room to talk to characters for one sentence of dialogue. And while you can skip this altogether, you have to talk to AI robots with almost no personality that give you challenges. The immersion and story break every time I talk to NPCs who say to go kill robots a certain way for no reason.

This in-between pause rarely has a conversation where I’m intrigued. I honestly wish V1 Interactive pushed for more interesting conversations and automatically gave you the challenges for each mission. Or at least made each in-between area smaller so it doesn’t feel like a drag. 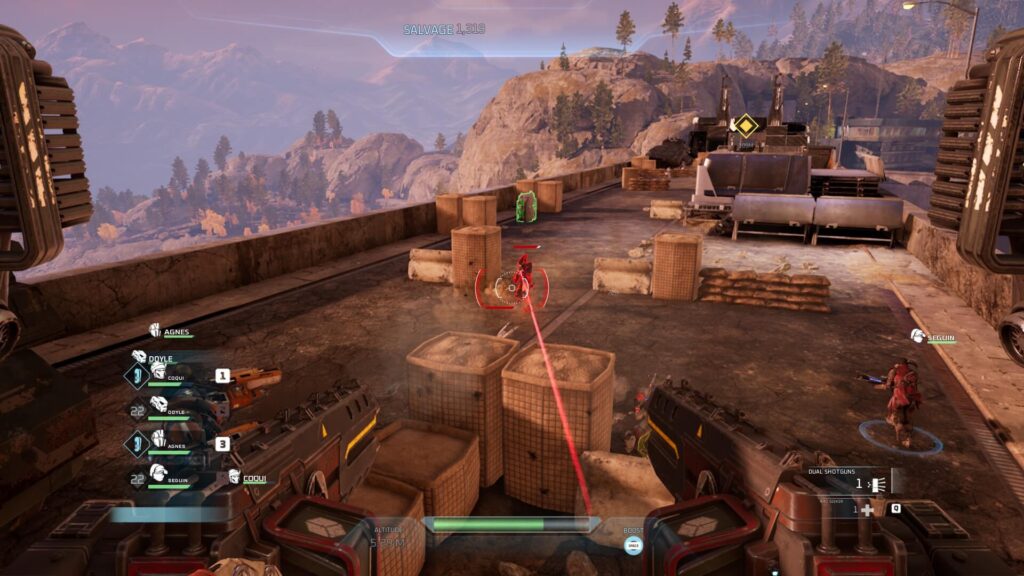 The developer isn’t blatant about certain objectives being repetitive, but it’s still noticeable.

Certain missions slowly turn into filler content because the objectives become less creative. You might not notice it in passing unless you take a closer look. A good chunk of them revolves around defending an objective or area from hordes of enemies. The developer often makes this less blunt by making it seem different in spite of still feeling the same.

On top of certain missions being repetitive, there’s a scanner mechanic that I’m both for and against. You can scan interactable objects and nearby enemies with this device. While I love it for highlighting enemies, it quickly gets annoying to have to scan every object for your crew. Instead of simply directing them to interact with something, you always have to scan it first. Then, if you wait too long before interacting with it, you have to scan it again.

6 – Destroying Walls and Buildings is Pleasing 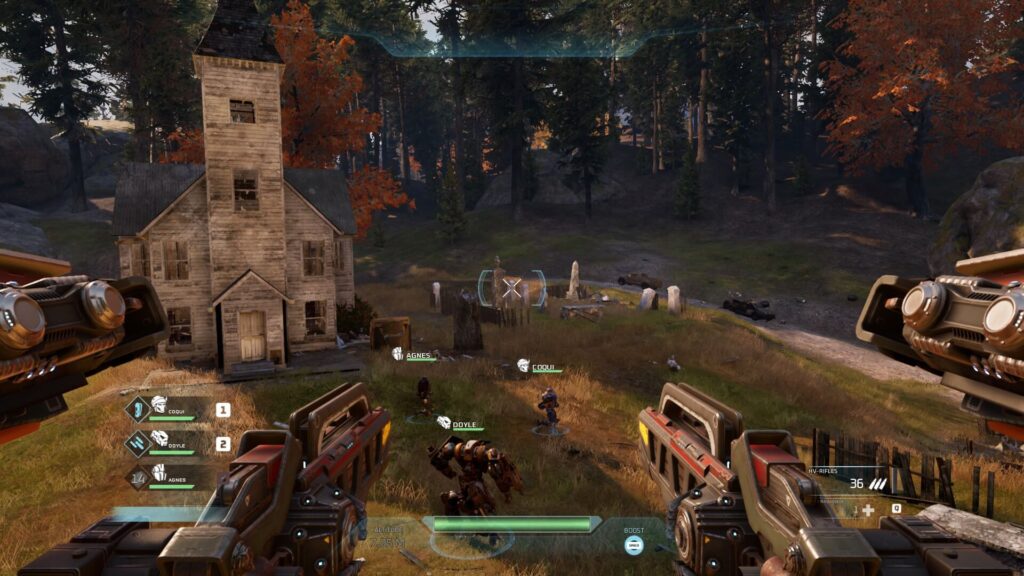 With every different environment, there’s a new world of objects to destroy.

Running back to our first thought about beautiful environments, I love the destruction that goes with it. Early stages show wooden slats on houses being torn off with every bullet. While destroying houses feels a little more cosmetic, there are still many opportunities to destroy enemy cover. Later levels take advantage of this by introducing breakable bunkers and concrete walls. There’s nothing better than catching robots off-guard by collapsing a giant concrete wall. 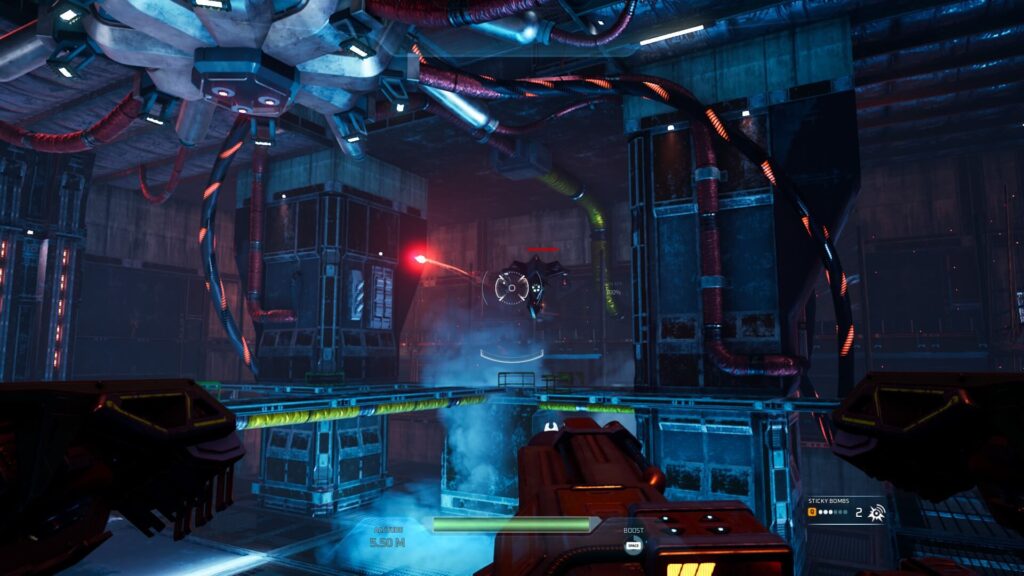 It might be an unfair comparison, but I wish the campaign Gravcycle fights came close to multiplayer ones.

Before I jump into this one, I understand that real players are likely to be more interesting than AI characters. However, the multiplayer action was extremely entertaining compared to campaign Gravcycle battles. I can’t quite put my finger on it, but Gravcycles in the campaign don’t feel balanced and come across as less of a dogfight. This is where the difference between real players and AI shows as you get a more lively fight in multiplayer. 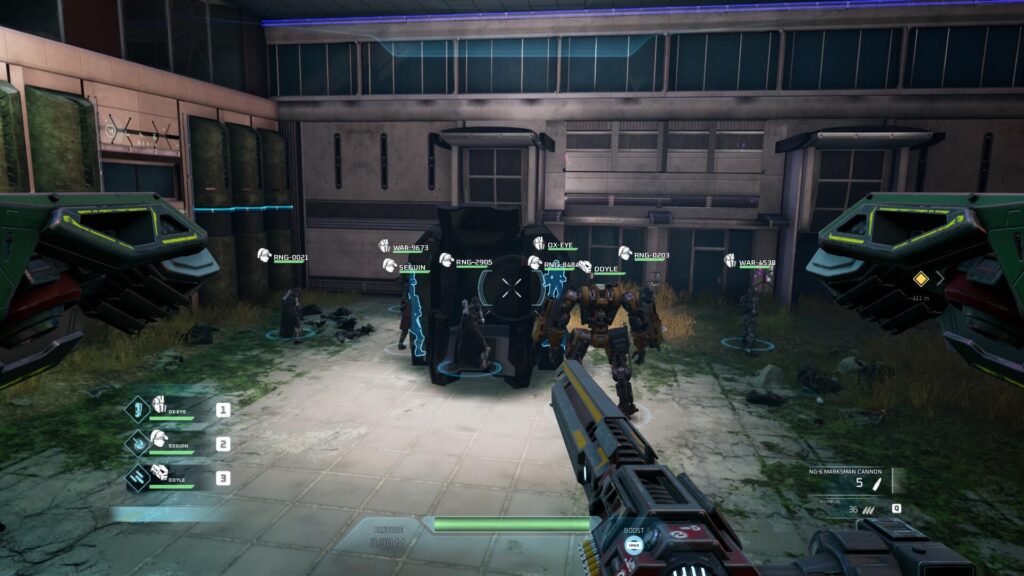 There should be a bigger emphasis on battles with larger amounts of followers, even if they’re still not controllable.

Developer V1 Interactive plays it smart by leaning more into the FPS side of Disintegration than getting overly complicated with RTS mechanics. As someone that loves both genres, I wish there was a world where a large audience would appreciate more unit control. Missions later on in the campaign introduce extra units that follow your crew around, despite not having abilities. These are usually prisoners you rescue or bases you’re helping defend.

These missions are some of my favorites because of how awesome it feels leading a massive crew. I want more of that. I can’t recommend leaning heavier into the RTS genre, but I guarantee more people like me would enjoy leading large groups. These are the moments I feel like I’m leading the revolution against the evil Rayonne.

9 – Disintegration Isn’t Perfect, but It Has Potential 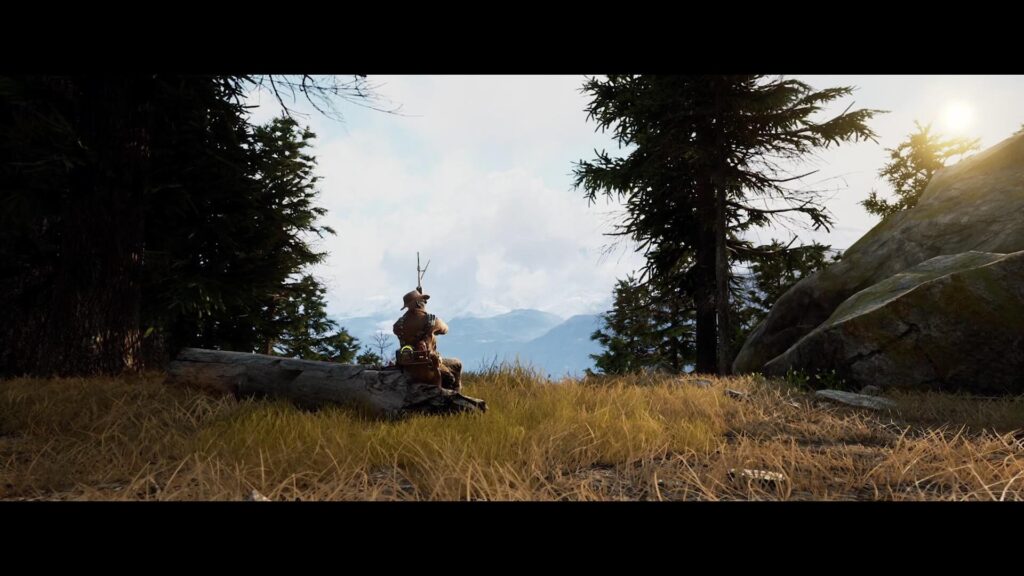 I’d love to see a franchise come out of Disintegration so the developer can build on what they’ve made.

V1 Interactive has created an interesting universe with this dystopian world set in the future. As dark as it might be, I could easily see this universe come to life if we somehow made these advances in technology. I hope Disintegration does well enough to warrant a sequel, because the developer has a great foundation to work with. They’ve set the scene, the characters are falling in place, and with a few tweaks, this could become a great franchise.

Disintegration was provided by the publisher via a Steam code.