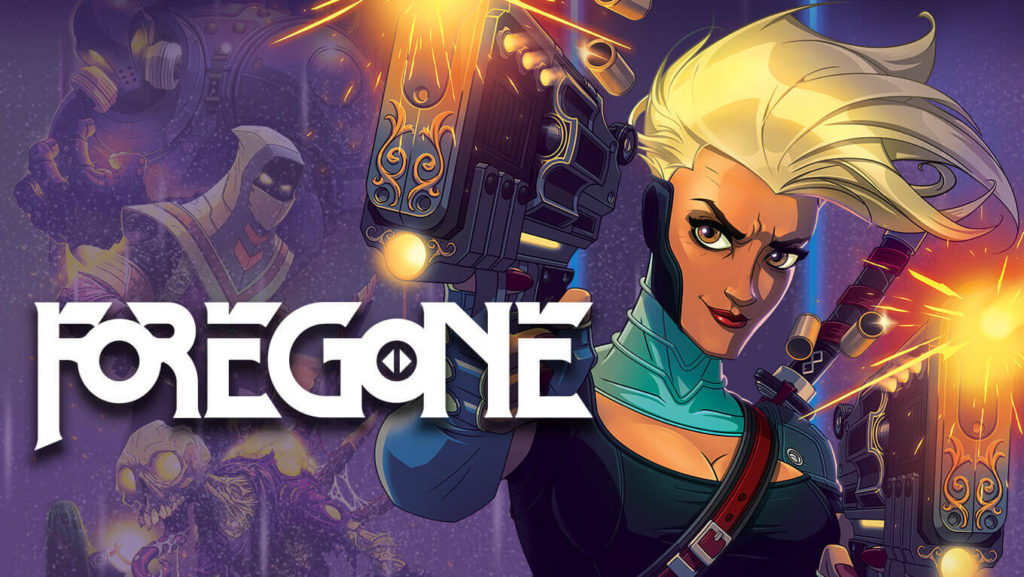 If you’re a fan of 2D action-platformers like Dead Cells, check out these Foregone tips and tricks below. Developer Big Blue Bubble released the early access version onto the Epic Game Store in February. While many people compare it to Dead Cells, it’s unique by having a linear story with permanent progression unlike the former. 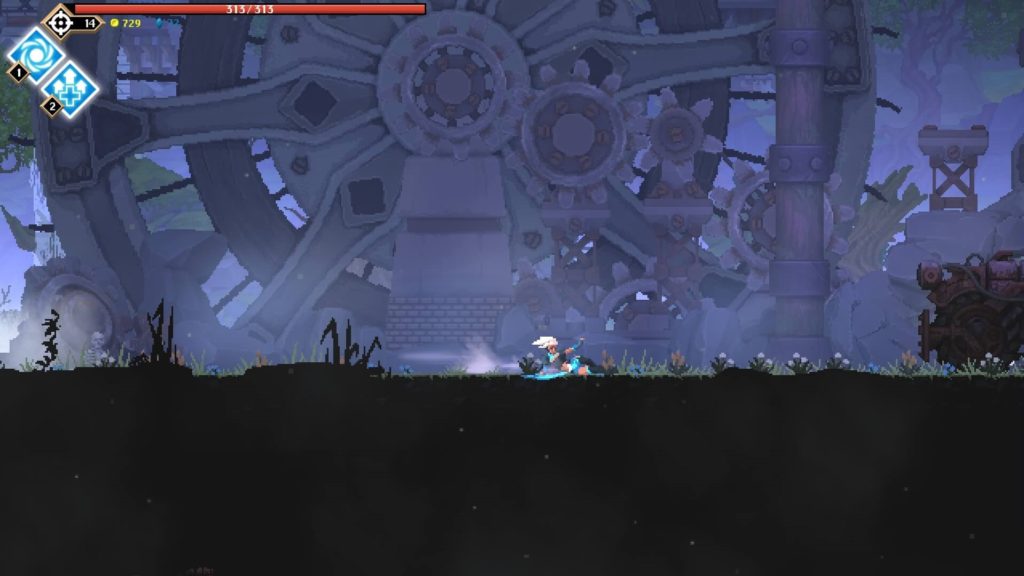 If you have fast reflexes for dodging, you won’t have much trouble.

An important tip to know in Foregone is how to dodge enemies efficiently. First, the game teaches you to slide through enemies as a dodge mechanic. This is your main way to dodge as you’ll frequently need to slide back and forth through an enemy attacking at their back. Second, jumping over smaller enemies or ground slam attacks is also useful. Third, when you unlock an air dashing mechanic, you can spend more time in the air away from enemies.

Sometimes it’s better to get a couple of hits in than committing to a full combo and getting hurt. Combine a couple of hits with a dash, and you’re more likely to succeed. Also, be wary of turrets since you can’t slide through them. 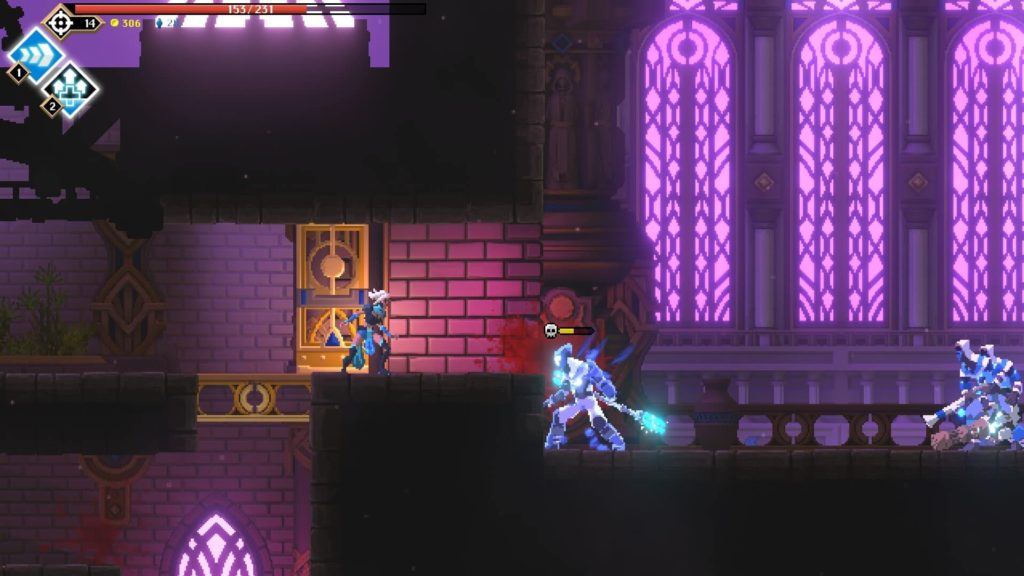 Ledges are your best friend.

Ledges are useful to take advantage of since enemies often can’t traverse them. This leads to situations like hitting an enemy from beneath a ledge or giving you the high ground over an enemy. The same concept applies to hitting enemies on a platform above you.

Tip 3 – Most Enemies Have a Vulnerable Moment

The majority of enemies have an attack or two they use before becoming vulnerable. Sometimes it’s worth waiting for that opening to get your combo in. The same idea applies to learning boss fights.

Tip 4 – You Lose Money and Shards on Death

You never want to die in Foregone or most games really, because you lose money and upgrade shards on death. The best way to avoid losing your progress is to save at checkpoints and/or backtrack to them. I’m not one hundred percent sure on if you lose all money and shards on death or not. 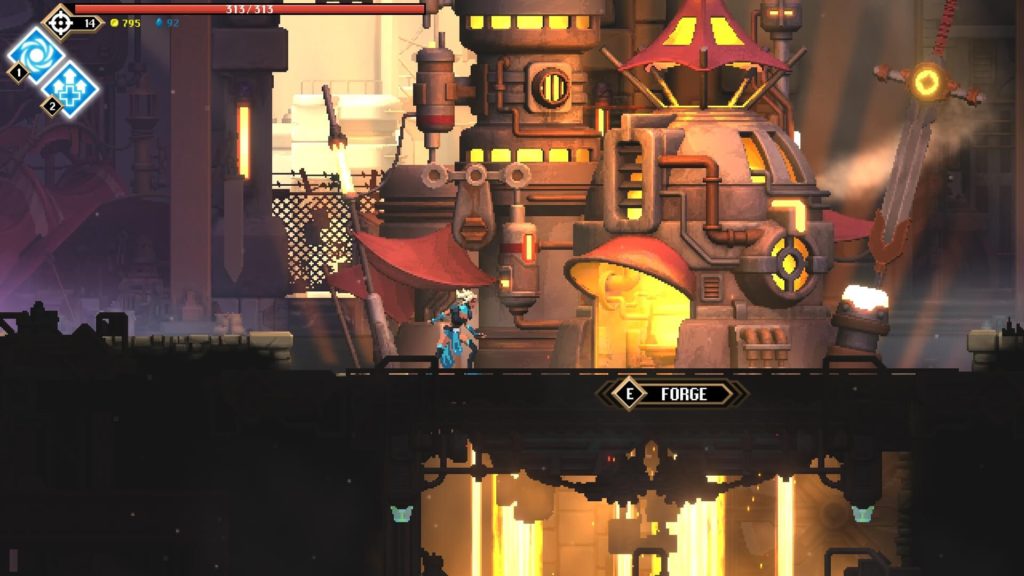 Save up that gold and upgrade yourself some new gear!

It’s important to upgrade your gear and skills to keep up with tougher enemies. Make the occasional trip back tot eh Forge for upgrading items and the Oratory for better skill passives.

Tip 6 – How to Quickly Traverse an Area 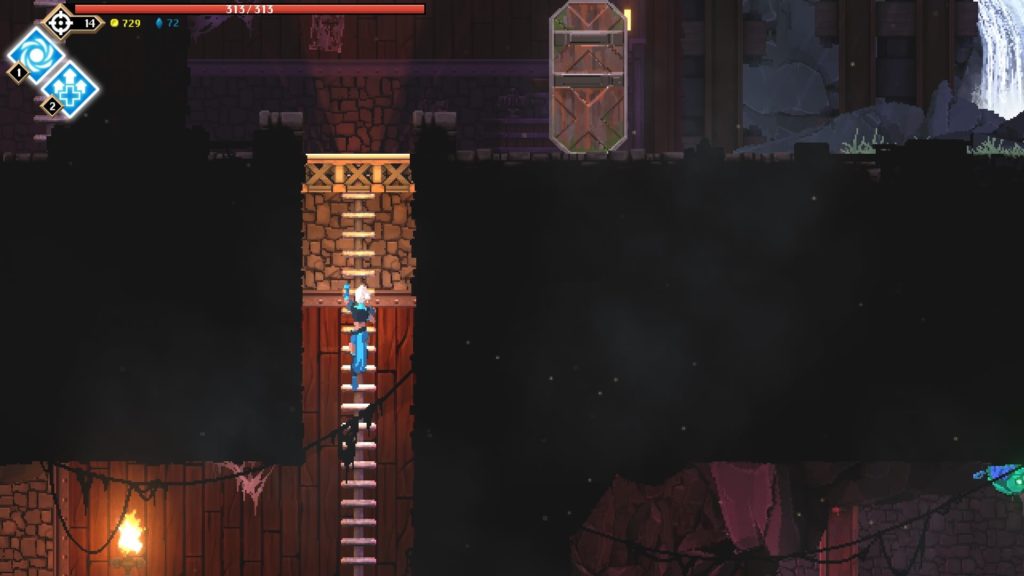 There aren’t many ladders, but jumping up them is a way to move quicker.

The best ways to travel quickly revolve around dodging and jumping up ladders. You might not be speedrunning Foregone, but you can get back to where you died faster with dodges and dashes. The first slide dodge you have has a cooldown timer, but the jump dash you unlock eventually doesn’t. This makes it easy to spam jumping and dashing together.

Tip 7 – What Active Skills Are Best in Foregone? 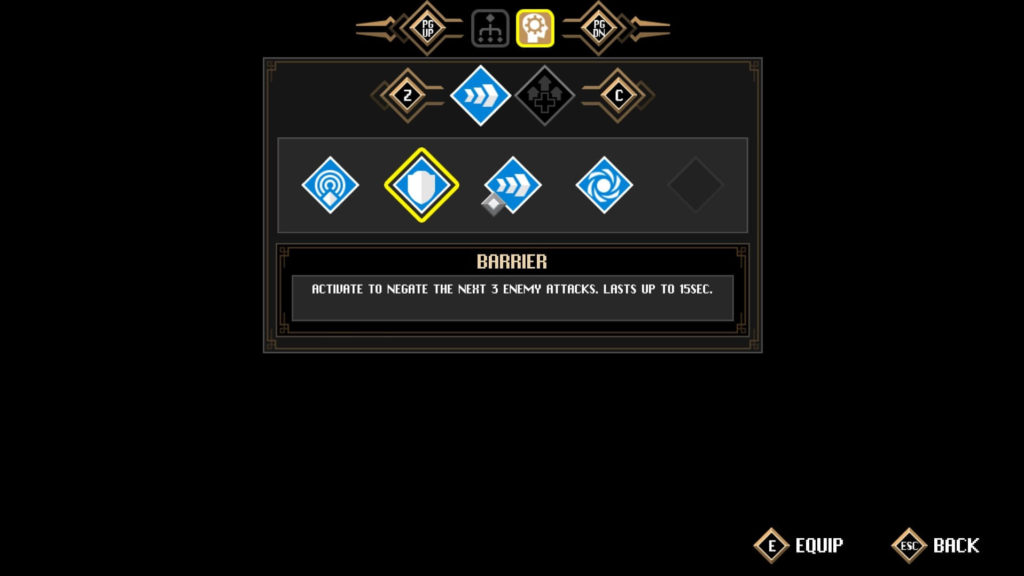 Choose the best active skill for your playstyle.

At a certain point, new active skills become available at the Oratory by changing the menu at the top. It’s not worth removing the Restoration skill as it’s a nice backup for when you take damage. However, the other skill depends on how you play. I like using Overdrive for extra damage. 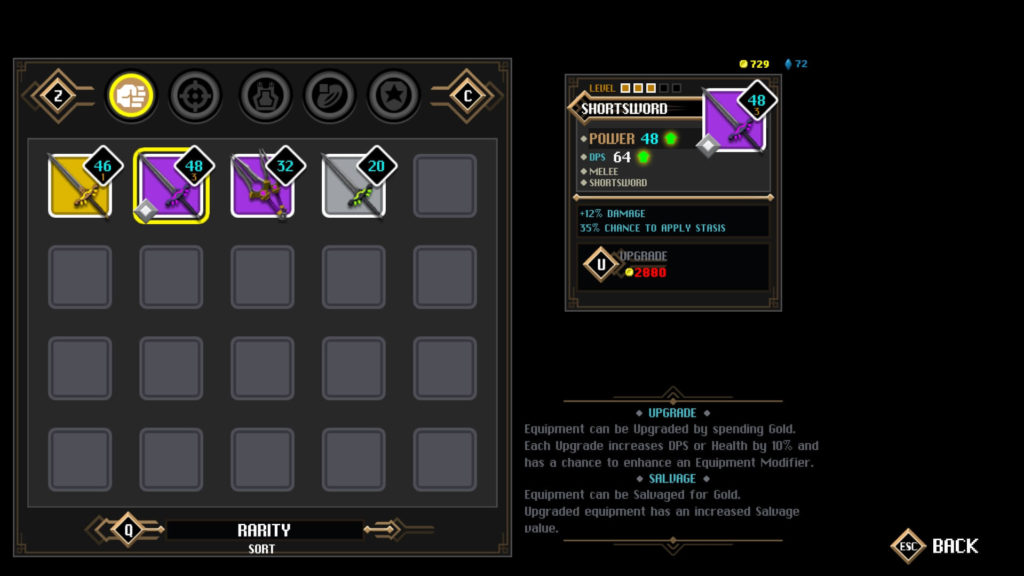 Every item has a rarity that goes: White – Blue – Purple – Gold. An item’s rarity decides how many traits it has with White having none, Blue having one, Purple having two, and Gold having three. Remember that the rarity of an item doesn’t mean it’s always stronger than another item.

Tip 9 – What is The Best Weapon in Foregone?

The best weapon tends to be a little more subjective depending on how you like to play. However, I prefer the Shortsword and Pistol combined together by far. The Shortsword has a quick combo leaving less risk on attacks. While the Pistol has the largest ammo count and fires quick too.

Every weapon is available below with speculative information:

Keep an eye out for small gaps that can be slid through.

Secret rooms don’t become visible until you enter them. This makes it difficult to find them because you have to look for small gaps along walls that are often slideable into. However, sometimes it’s a platform that you need to jump to or from instead. 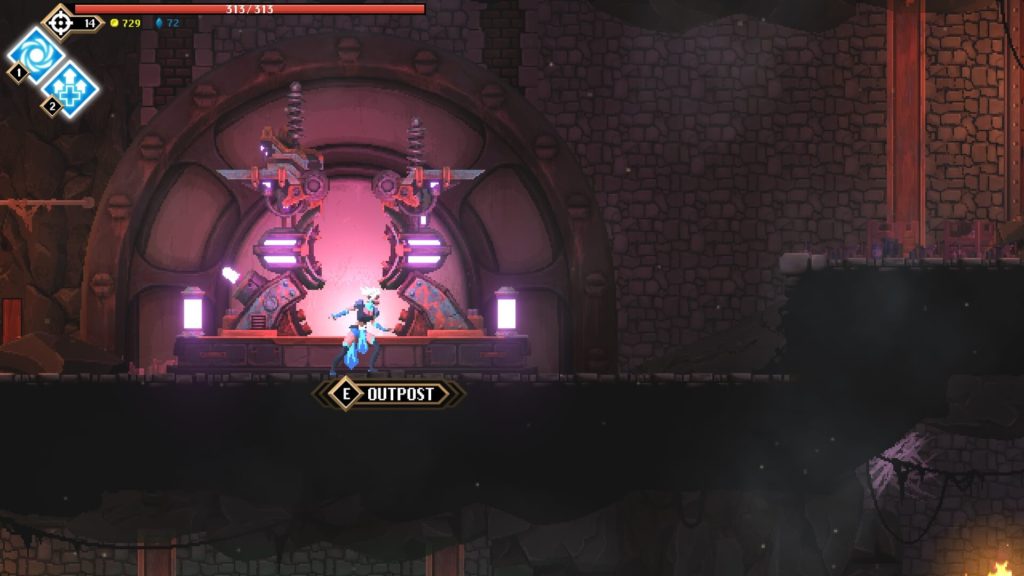 There’s nothing wrong with skipping a few enemies to get to the checkpoint.

Sometimes it pays off to dodge past enemies to find the next checkpoint. This helps with making progress and saving your currency. You can always backtrack to enemies if you need to instead of losing progress when you’re low on health.

Tip 12 – You Can Only Shoot the Direction You’re Facing

Before you take advantage of a ranged weapon, know that you can only shoot the direction you’re facing. This mostly applies to people on PC who might have their mouse cursor facing away from where they are. Because Foregone uses auto-aim targeting, you’re limited to where you’re looking. 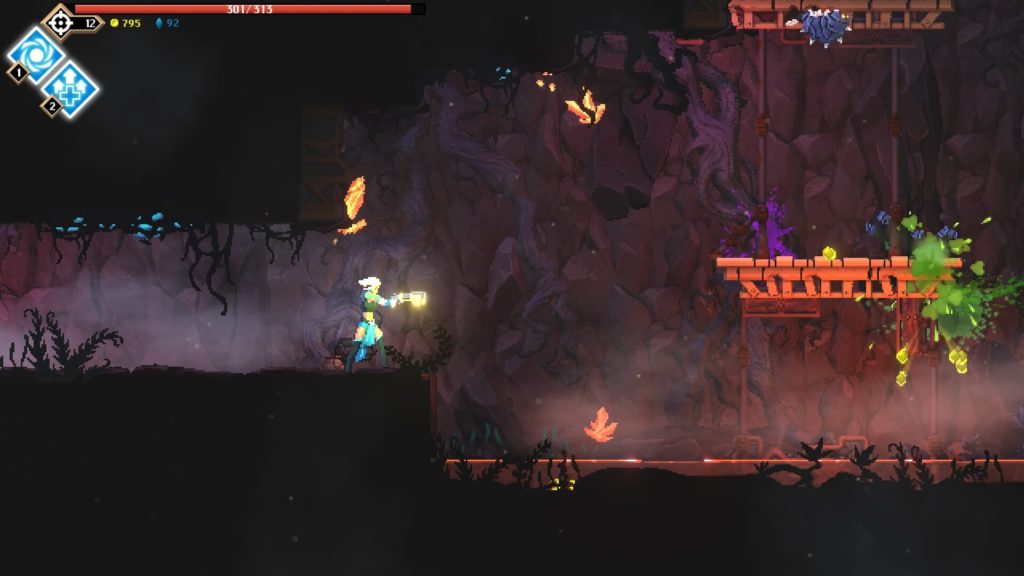 A good combination of melee and ranged combat is effective.

It’s important to mix together your melee and ranged combat for most enemies. Sometimes it’s better to store ammo, but often, you can take a couple of shots at an enemy, and finish them off with melee. By using a combination of both, you’re making each fight easier. Especially in the case of bosses when you’re not able to get close.

Every ranged weapon has a maximum amount of ammo as shown in my best weapons tip. This means that every melee attack after your ammo is full doesn’t go toward refilling it. It’s not always worth losing out on potential ammo unless you’re saving it for something. The same concept applies to abilities like your healing Restoration. 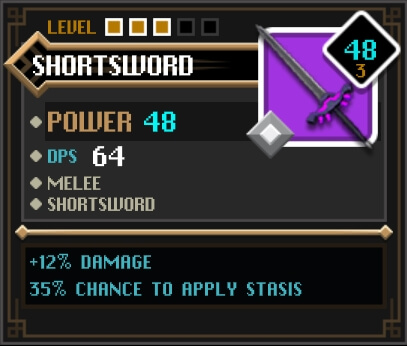 Debuffs that you can apply on enemies like Stasis or Plague can be extremely strong. For a while, I had a weapon with a 17% chance to cast Plague and it happened consistently. Plus, Plague appears to spread between enemies too.

I hope these tips and tricks help you get started. If you’re a fan of Foregone, check out similar games like Dead Cells, Hollow Knight, and Sundered.

Foregone released on PC via the Epic Games Store on February 27, 2020. The developer plans to release it on Xbox One, PlayStation 4, and Steam at a later time.

Foregone was provided by the developer via an Epic Games Store code.