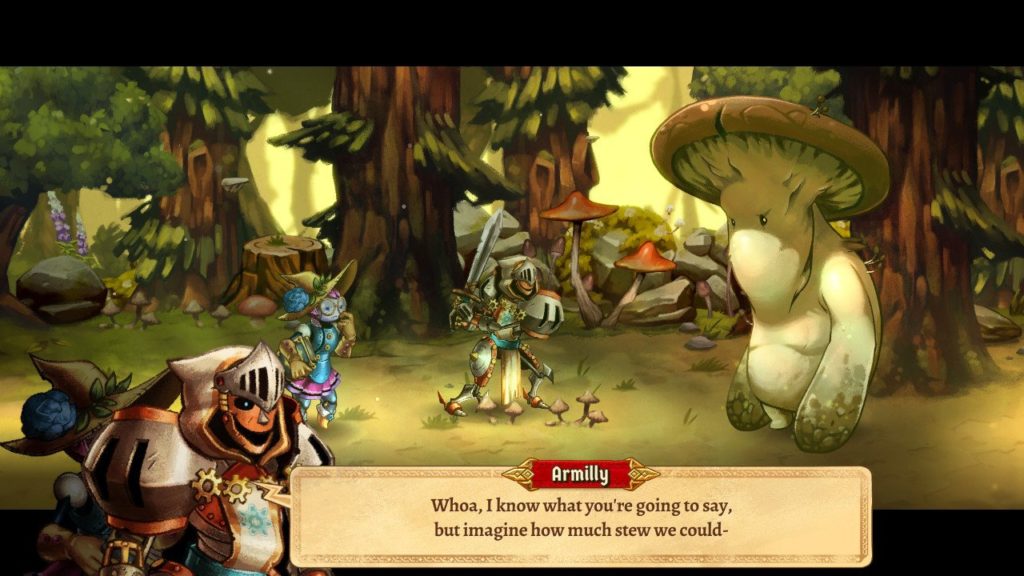 The SteamWorld developers always slip silly humor and puns into their franchise.

SteamWorld Quest: Hand of Gilgamesh shows how Image & Form keeps tackling different genres successfully. The SteamWorld universe got its start in 2010 as a tower defense game and has since garnered attention across several video games. SteamWorld Quest continues to build on that setting with new characters, stories, and a new way to play through card-based combat.

I got my first taste of SteamWorld six years before their first game even existed. For those of us growing up with video games but not being able to afford them, free flash games were a great source of entertainment. I recall playing a flash game from XGen Studios called Motherload; few people may know what I’m talking about.

Both Motherload and SteamWorld Dig toss you on a planet and give you some reason to start digging and make money. Motherload was a lot less story-driven until their Super Motherload sequel more recently in 2013. Whereas, SteamWorld Dig showed me how a western steampunk world of mining could be more than a flash game I played for an hour, at most. It gave me a world with all these unique quirky robots mining away.

Super Motherload shines alongside SteamWorld Dig, but the SteamWorld franchise stands out as a humorous steampunk world.

That was my first taste of the SteamWorld universe and I’ve always looked forward to what the Image & Form team puts together since. SteamWorld Quest is another example of a great game from this developer even if you’re not sold on card-based combat.

SteamWorld Quest kicks off with your first two main characters, Armilly and Copernica. Coming from nothing, Armilly constantly dreams of adventure and one day becoming heroic enough to join the Hero Guild. Their journey begins after grouping up with their friend Galleo and tracking down the robots responsible for torching their village and home. 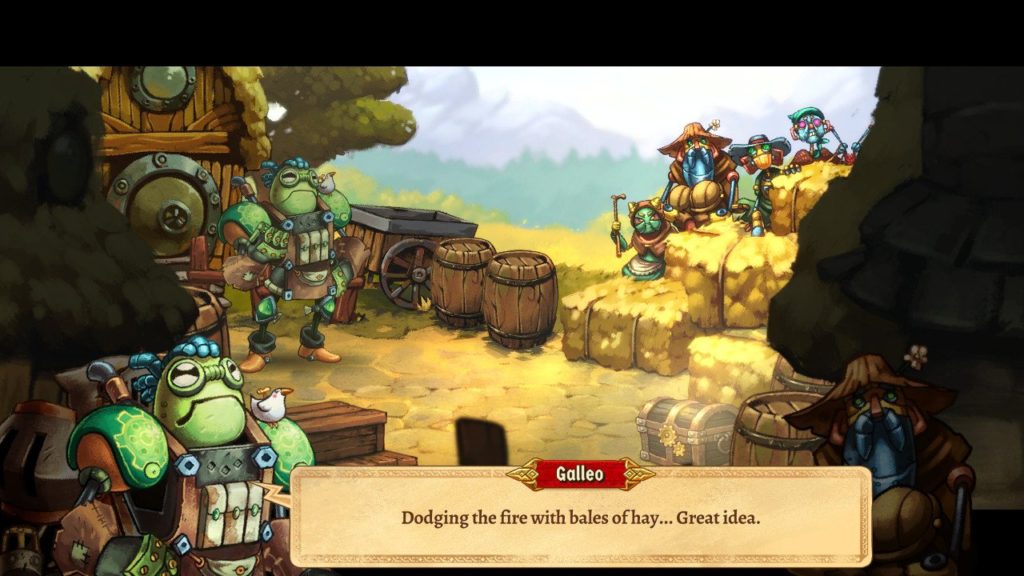 What better place to hide from fire than flammable bales of hay?

The SteamWorld games always tend to run lighter on story and more on silly moments with puns. This entry in the franchise is no different from that style as you can tell the developers had fun sneaking puns into dialogue as often as possible.

From fighting robot bees to piles of slime, the story has a silly vibe with an occasional serious moment that can catch you off guard. These serious moments tend to bring it all together into an interesting journey for each character finding themselves. I’d almost compare it to a coming of age movie.

The combat in SteamWorld Quest immediately reminded me of Slay the Spire with that being one of the more recent turn-based card combat games. However, instead of following a similar mechanic as many games in this genre do, Image & Form went a different direction. Many card-based games, in my experience, have a supply of energy charge up each turn. Players can then use this energy toward a card to attack an enemy or heal a friendly creature for example.

SteamWorld Quest turns away from that mechanic and instead makes it so each character has cards available to them that create this energy. In this steampunk universe, the energy is instead known as steam pressure (SP). The player quickly has to manage how they use their cards each turn as they can only use up to three cards per turn. This makes each turn interesting as you wonder if its best to gather SP on one turn or have a mixture of SP generating cards and ones consuming them. 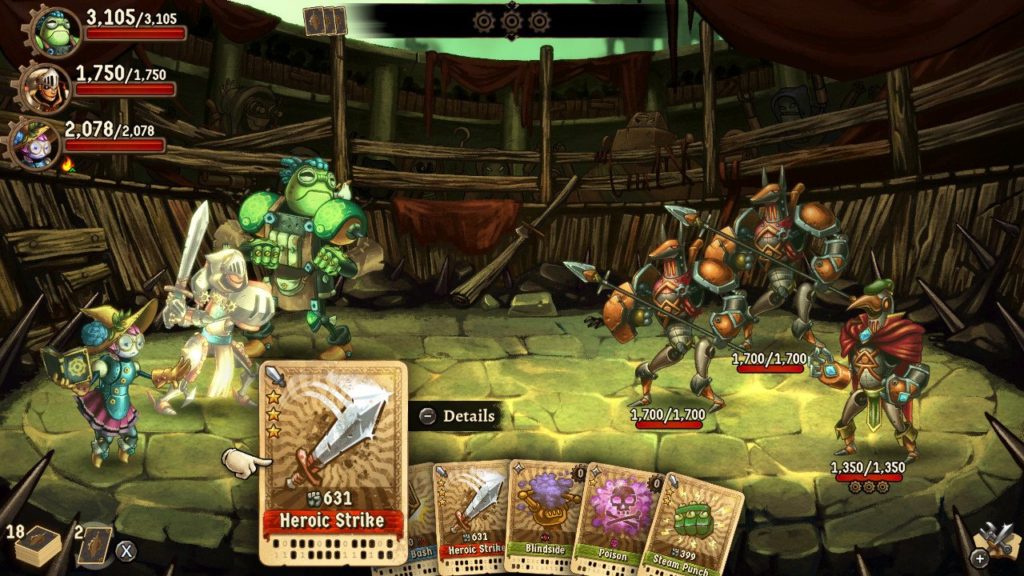 The combat eventually becomes more endurance than a challenge as you iron out the kinks in your deck build. If you work in new cards or different characters you might change up your experience. However, there’s almost always a certain way to play depending on which character has more cards drawn.

Image & Form has a mechanic where each character can combo three of their cards together to activate a fourth card ability. This feature is a neat one, but it also almost limits your creativity in how you play. I personally lean toward it being a neat idea since you can still mix together cards in that character’s deck.

Take Full Control of Your Deck

The RPG aspect of SteamWorld Quest keeps you leveling your characters and discovering new cards as the campaign progresses. Image & Form gives you full control in building your deck for each character and upgrading their cards along the way. People can attain cards from chests, by crafting them, and simply unlocking them by finishing chapters of the story.

Players are only limited to eight cards and not by the type of cards. Therefore, if you make a terrible deck, that’s on you. Simultaneously, it lets you filter in those more expensive SP cards or cheaper ones depending on how you play. It would have been nice to have savable decks to experiment with different ideas.

Without getting too much into it and spoiling anything, you can have up to three characters in your active party. Each character tends to have a certain way of playing them that has some leeway based on how you build both their cards and weapon. However, it becomes a waste of time to focus on more than three characters. 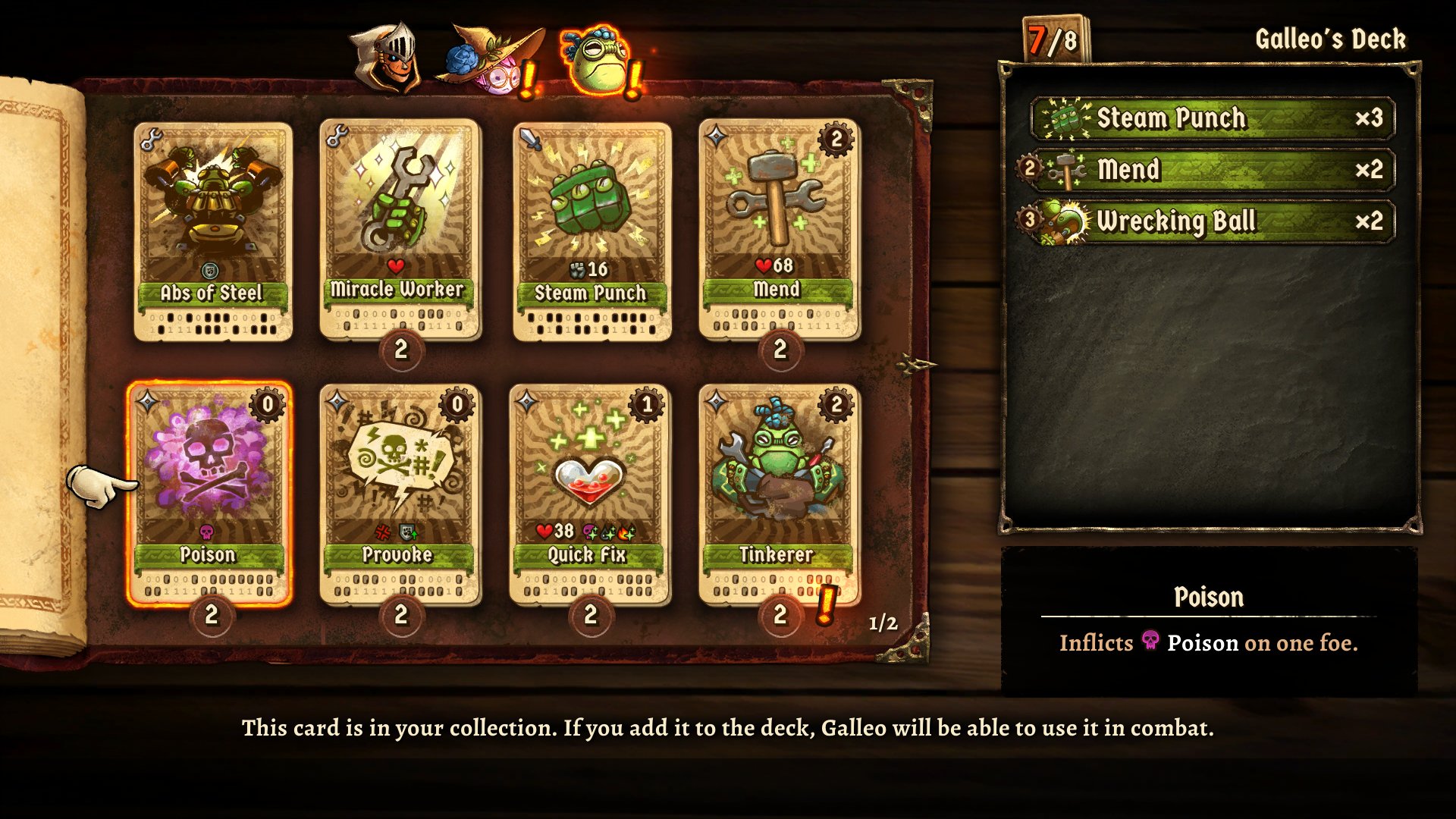 Players can build their own deck and create interesting strategies.

SteamWorld Quest gives you a mixture of crafting ingredients and gold from battle to battle. These rewards can be used toward buying gear, crafting cards, upgrading cards, etc. Without an abundance of these resources, there’s no reason to invest deeply in any character unless you intend to replay content.

That’s one feature I always applaud any RPG for, replaying areas. If you’re struggling because you’re not strong enough or ran past an enemy too many times, you can replay content for extra experience and money.

The RPG elements in SteamWorld Quest are done well, it just prevents you from fully experiencing what it has to offer. After 17 hours of time in the game, I beat the main story and experienced side content as well. If I wanted to level my other characters, who knows how much higher that number would be.

Or if I wanted to invest in those characters by upgrading their cards to make them stronger. I’m sure each character is playable to an extent without being the highest level or having the best cards. But, those boss fights might become that much more of a struggle. 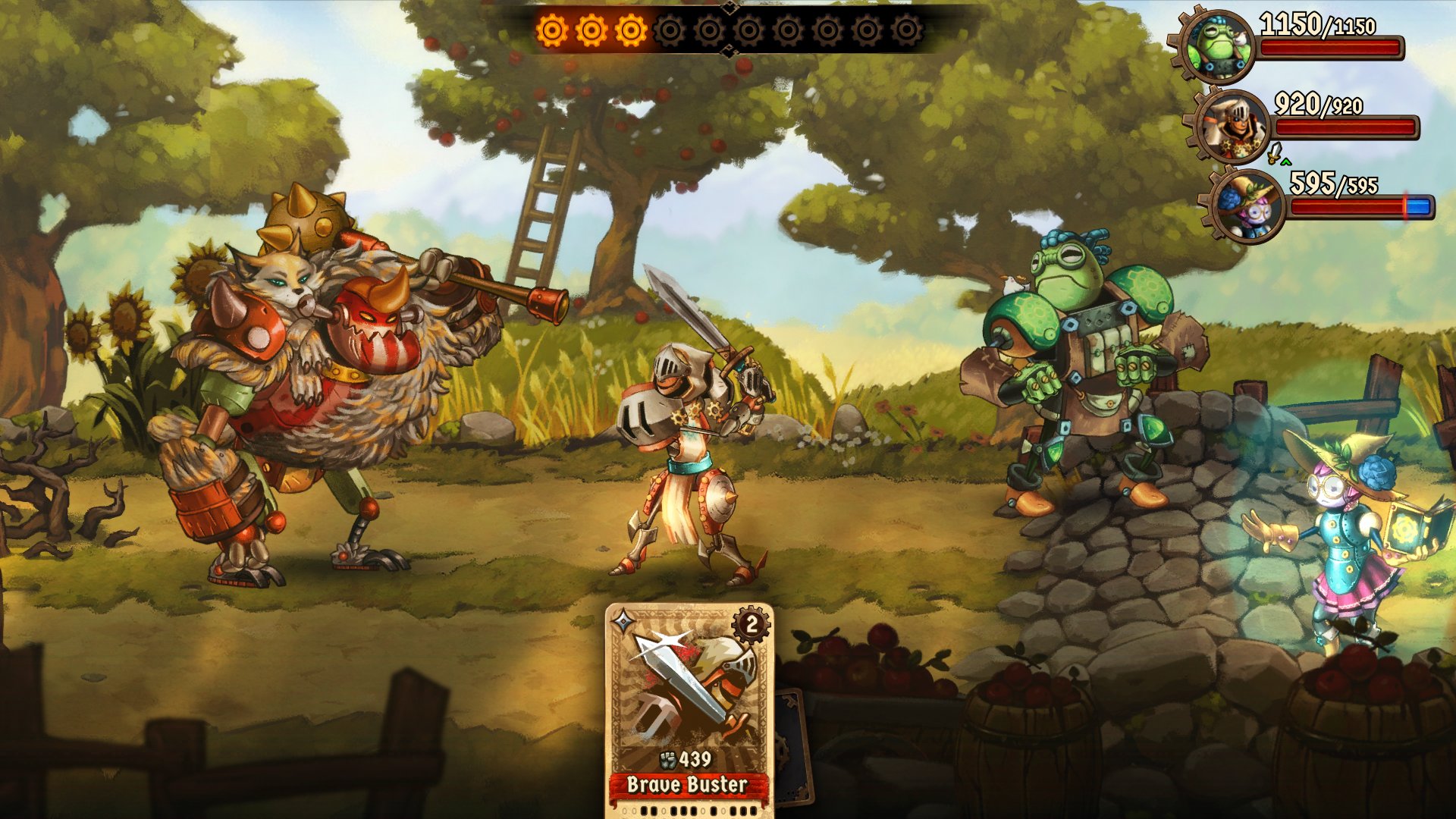 The variety of cards and characters give players the ability to craft their own playstyle.

I quickly found my main active party and stuck with them throughout the entire game. I won’t spoil them since I’d prefer for you to figure it out on your own. However, I’d be surprised if most people don’t go the same route simply because it feels designed that way. If anyone wants my two cents, feel free to ask in the comments, and I’ll describe it more there.

I’d easily recommend SteamWorld Quest as another great game from a solid developer.