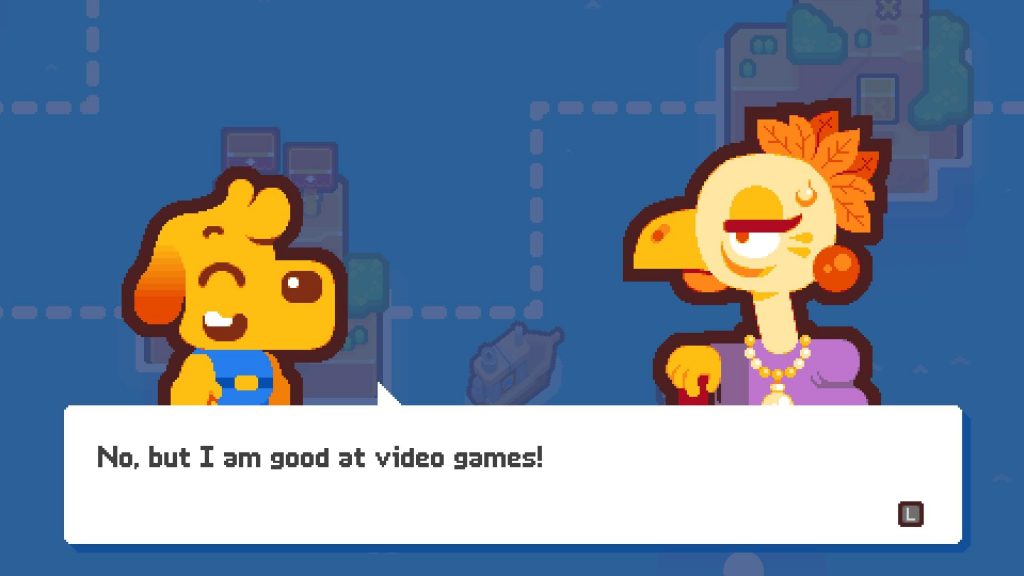 Grapple Dog is a cute 2D platformer where you play as a dog named Pablo who has a grappling hook. Since there are a lot of basic mechanics and tricks easy to miss, I put together this guide to help you get started.

This includes everything from some of the more basic tips to advanced tricks as well. Such as how to heal so you can stay alive or understanding speed mechanics. Hopefully you’ll learn something new so you can defeat the villain Nul and speed through those Time Trials.

Tip 1 – How to Get Health in Grapple Dog 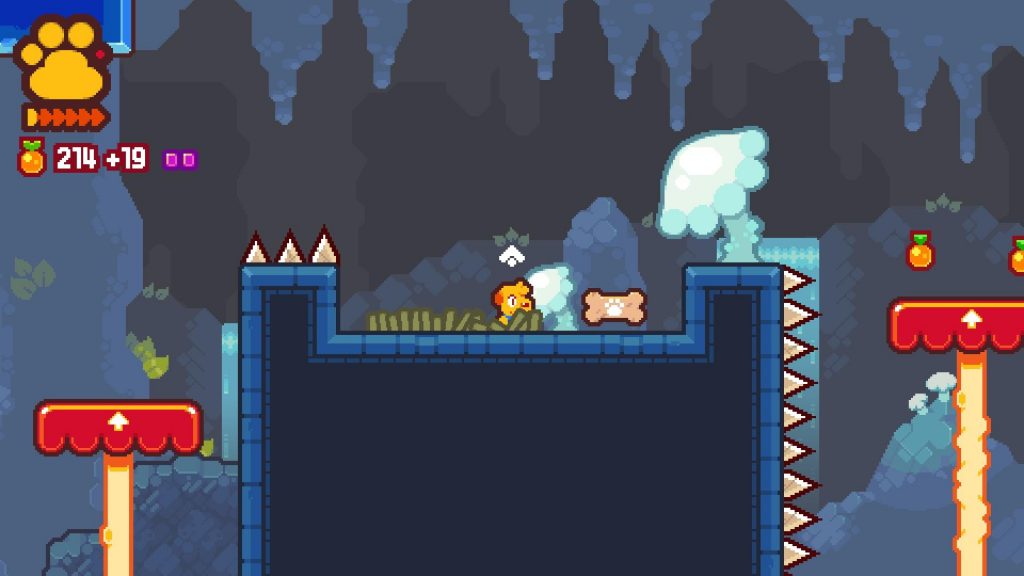 Time Trials also have even bigger bones that you can get two health from.

Whether you’re completely new to this platformer or not, you’re bound to lose health at some point. This could be while checking for a secret in a dangerous pit or an enemy getting a little too close. Regardless of why, it doesn’t hurt to know how to heal so you don’t lose progress.

The two main methods of getting health are dropped bones from enemies or reaching a checkpoint. A bone will give you one health while a checkpoint will heal you back to full and keep your progress. Also, bosses tend to drop bones as well in case you’re struggling.

While there are plenty of tricks for taking out robots, this is a fun way too.

I don’t know how but it took me multiple zones before realizing a trick for taking out enemies. While you can slam down on top of robots, you can also slam into the ground to become a dangerous bouncing ball. If you slam near an enemy and then move toward them, you can deal some damage.

This is a great trick for taking out tall robots and even small ones too. But, it’s extremely easy to never realize this exists in Grapple Dog. Another fun tip to take advantage of is grappling toward enemies if you’re below them. 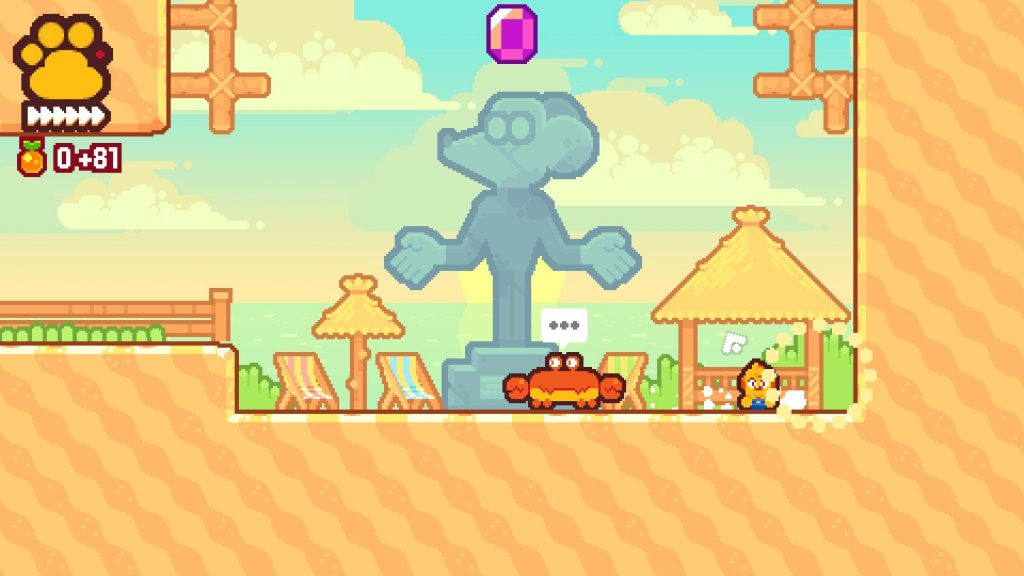 You don’t need to go fast if you’re just doing time trials, but it can help in certain situations.

While playing Grapple Dog you may notice arrows charging up near the top left corner. When fully charged, you’ll gain a significant speed boost. This can save you from getting hit by a trap or help make a jump more easily.

Until that set of arrows is fully charged up, you won’t benefit from the speed boost. Fortunately, it isn’t too difficult to charge up since every method of moving seems to fill it up. 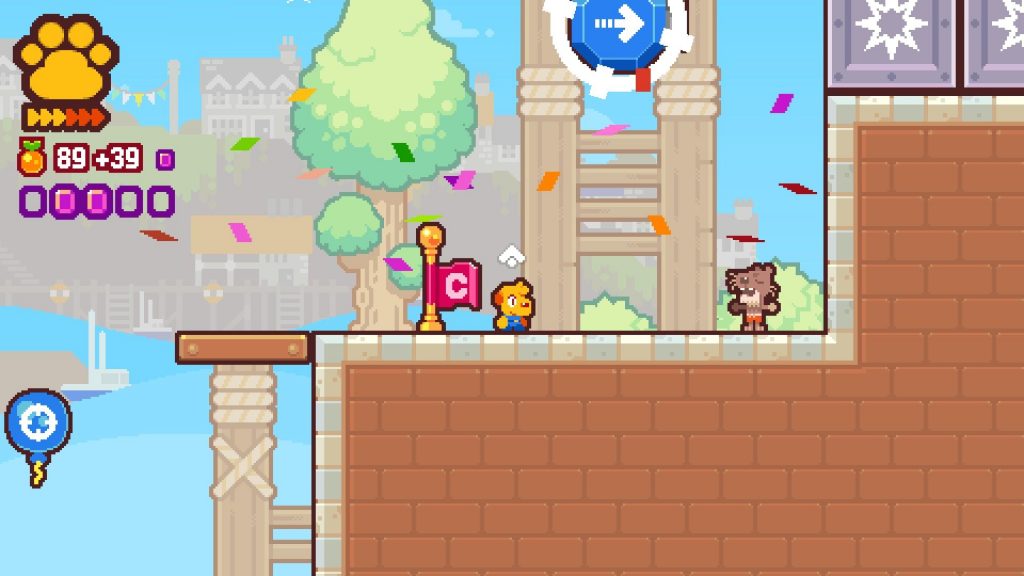 Make sure to get as many purple gems as you can to unlock the next boss.

Gathering purple gems in Grapple Dog can be a challenge if you don’t have a keen eye for secrets. With that said, there is a useful trick to know if you’ve already missed a purple gem on a level. Every time you get a gem, you can see which one of five you’ve gotten near the top left corner. Or you can pause the game to check as well.

For example, if you missed the first purple gem and got the second one, you’ll see only the second slot filled. Unfortunately, you often won’t be able to backtrack but you can make a note of this for replaying the stage. 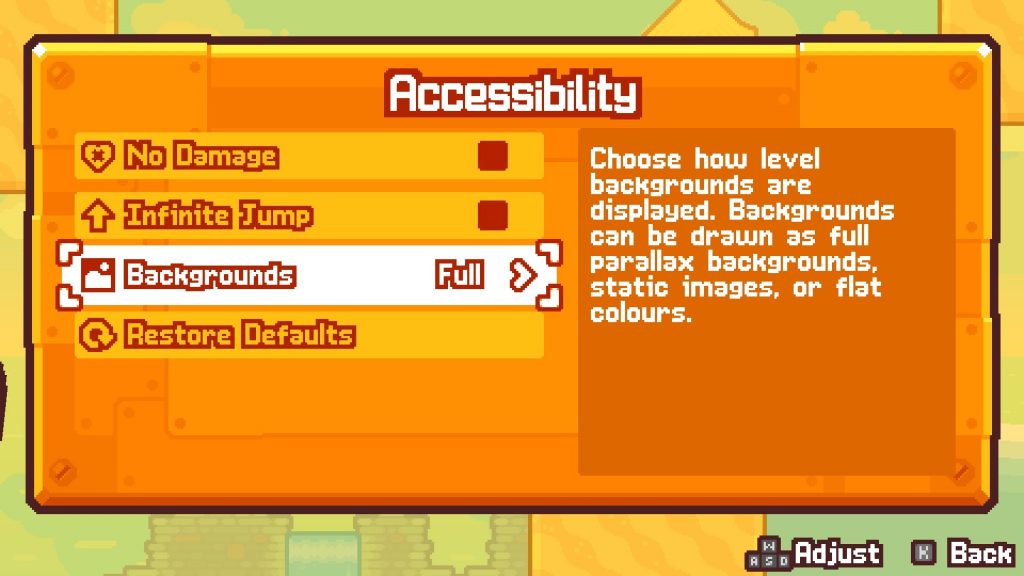 Take advantage of these settings if you want a more relaxed experience.

Did you know the options have a section for accessibility settings? While there are only a few options to tweak, this can make or break who’s able to play. These settings include removing damage from almost everything, infinite jumps, and changing the background appearance.

Using these options will show a couple of symbols on the screen, but they won’t prevent you from completing a level in Grapple Dog. Accessibility options are always great since they make gaming for everyone.

Tip 6 – Drop Straight Down While Grappling 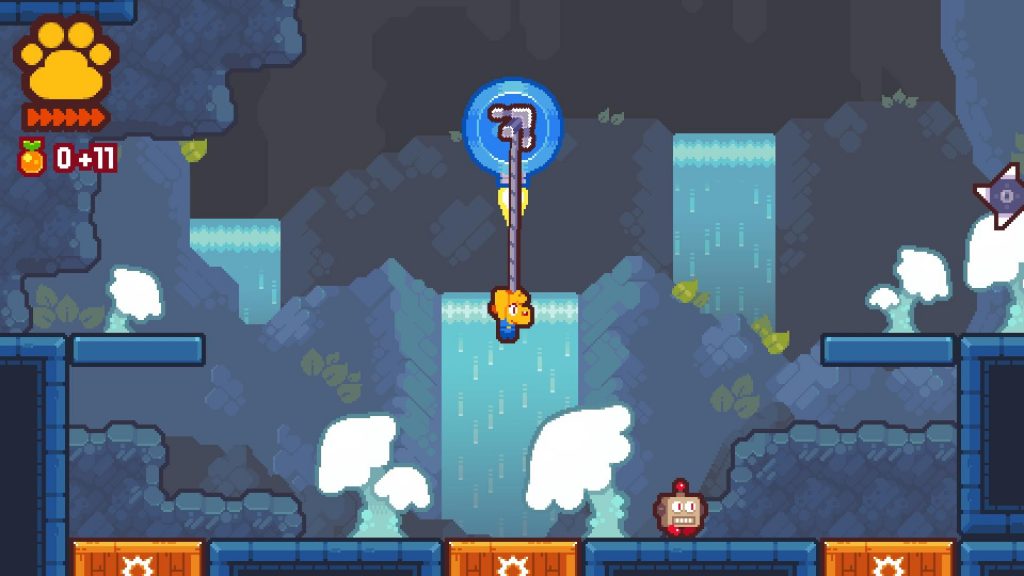 A lot of secrets require dodging around dangerous traps and this tip can help you out.

It can take a little bit to master the controls of Grapple Dog and as such, you may miss obvious techniques. Similar to Tip 2, I didn’t realize immediately that I could slam straight down while grappling. This may not seem like that major of a tip, but it’s huge in certain scenarios.

It’s a game-changer when you can slam down between two giant saw traps while grappling from above. Otherwise, you may find yourself fiddling with the jump button to nail that angle just right. And end up launching right into the trap instead. Don’t forget that you can also grapple out of a slam too.

Tip 7 – How to Float Further Mid-Air 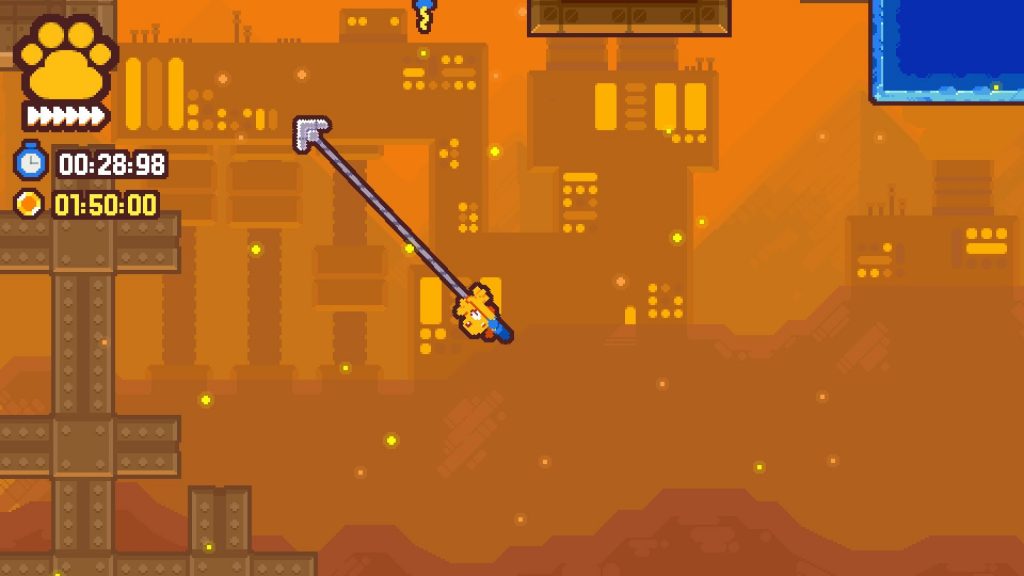 Dropping slowly is also a great way to see where you’re going to land.

This is a fun but simple trick where you can grapple into the air to float. As long as you don’t hit a wall, enemy, or attach to something, you’ll float in the air slightly longer. More often than not, this can be the difference between hitting a spike and just barely dodging it.

Another example of when this trick comes in handy is when you miss a grapple and are falling haphazardly. Sending your grapple out a few times can be enough to get out of harm’s way. I know it’s saved me on more than one occasion. 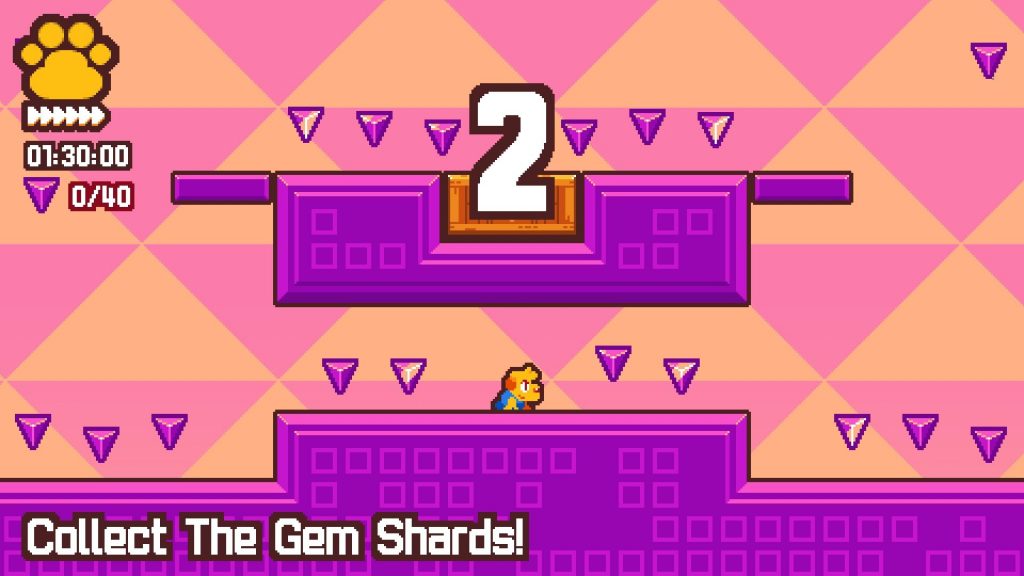 Bonus levels are a nice way to change up the game every now and then.

Keep an eye out for blue coins with a B on them to unlock bonus levels. These make for another great opportunity to gather purple gems. Plus, they’re usually a fun test of your skill in different ways. Here are the various bonus stage types you’ll come across:

Tip 9 – How to Find Secrets in Grapple Dog

Many secrets are right in your face like this one on the right side of the screen.

Almost every level has five hidden purple gems even though many are easier to find than others. Typically you just have to keep an eye out for parts of the terrain that stand out. However, some secrets can be a little trickier if they’re near danger. For example, needing to swing over spikes to a platform out of vision.

As long as you’re not in a rush, try to always explore or swing up high to find secrets offscreen. Don’t be surprised if you fling yourself into a bunch of spikes while searching for secrets. I know I have plenty. 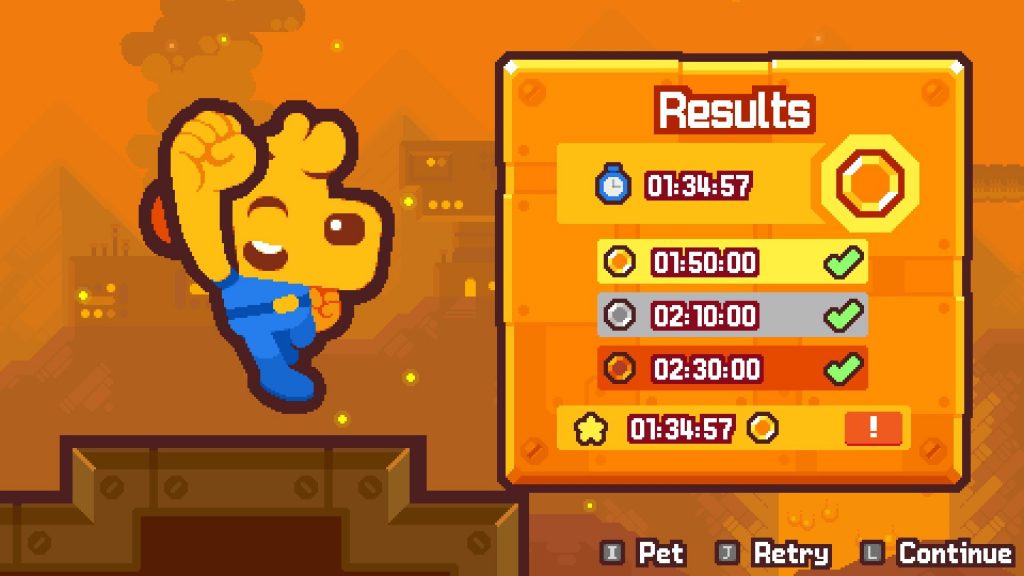 Time Trials are a great way to challenge yourself to go as fast as you can.

Mastering a Time Trial in Grapple Dog will take more than just a few tricks. You’ll need to run it several times to memorize the layout so you know what routes to take. There’s no reason to search for secrets or purple gems when you really just need to ring that bell at the end. However, here are some basic tips to speed up your run.

That’s all there is to this guide filled with tips and tricks. Hopefully you get the opportunity to check it out since Grapple Dog is a cute platformer with silly quirks worth playing.

A Grapple Dog key was provided by the for the purpose of our coverage. Developed by Medallion Games and published by Super Rare Originals.