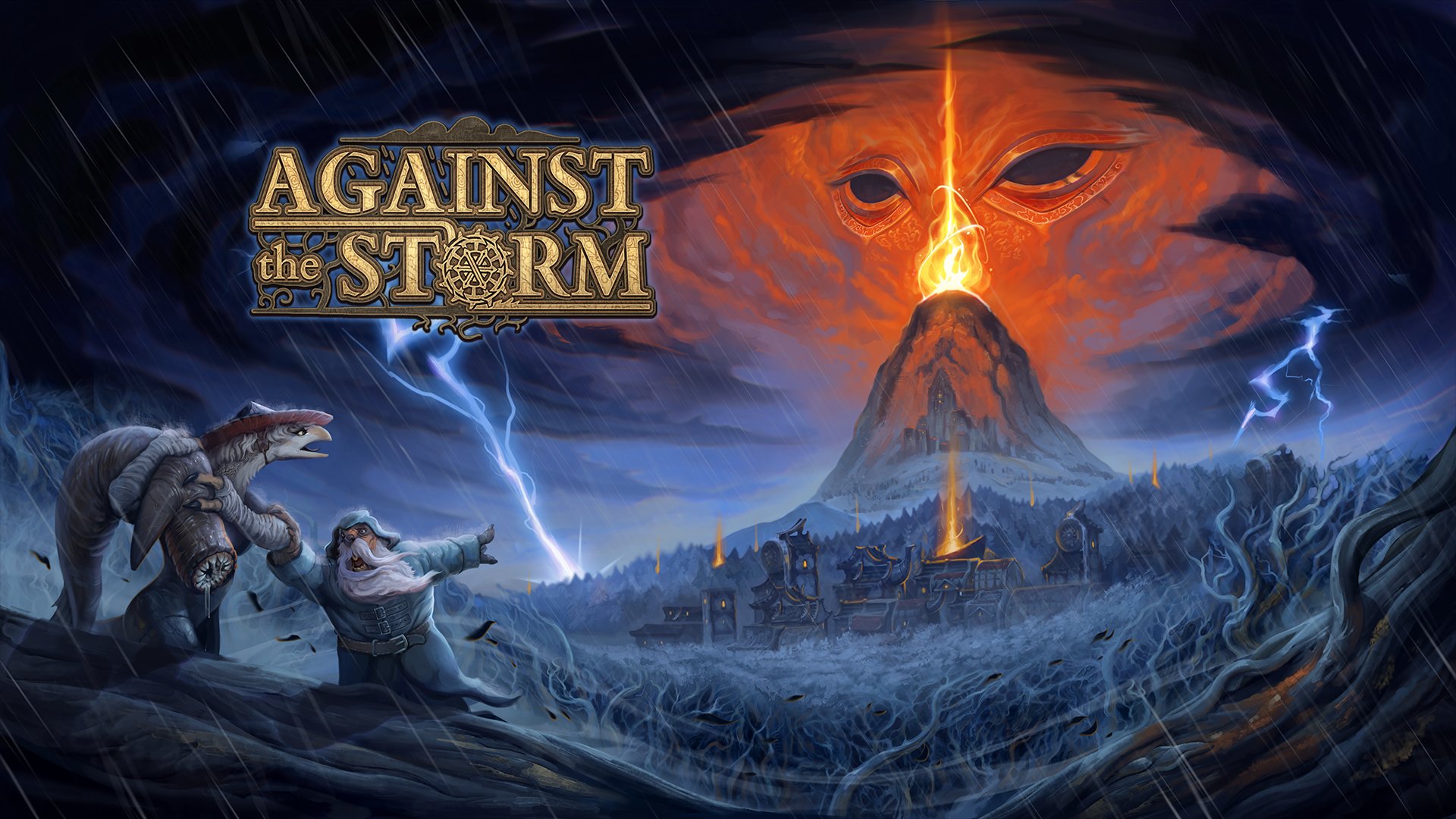 Against the Storm is a roguelite city builder where it can be tough to survive if you don’t know where to start. This fantasy world never seems to stop raining and that can make for a tough time. Our guide covers all sorts of tips like how to win, how to get Reputation, how to get food, and plenty more.

Tip 1 – How to Win in Against the Storm 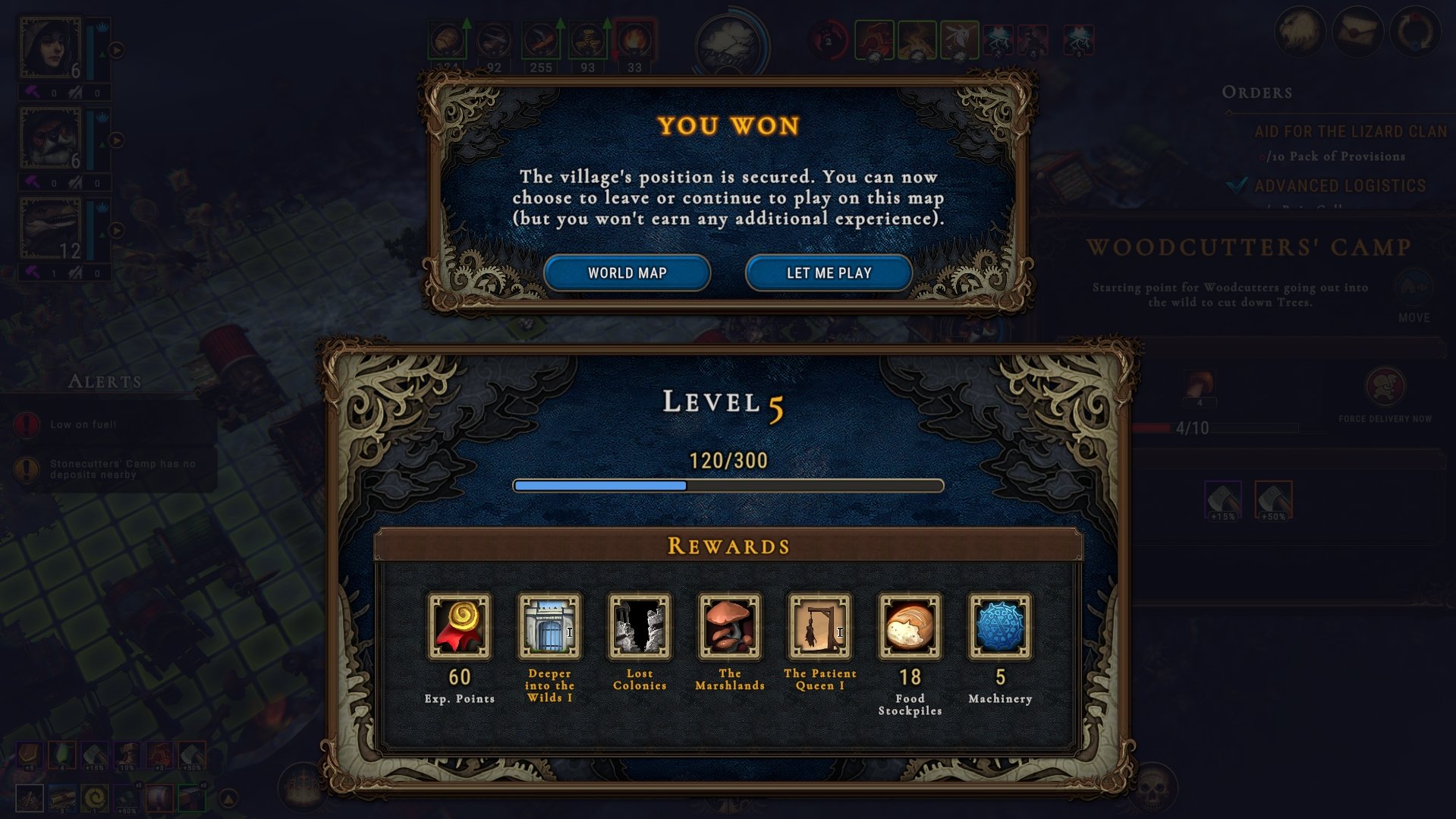 Completing an area provides experience and different currencies for unlocking upgrades at the Smoldering City.

Unlike other city builders and colony sim games, you’ll need to build several separate settlements. Every time you launch a new colony, you’ll need to juggle increasing your Reputation while fighting off the Queen’s Impatience. This is represented by the blue and red bar at the bottom of the screen.

All you need to do to win is reach 10 Reputation before the Queen’s Impatience hits 10. Fortunately, this becomes easier the farther you get. This is because you’ll have more buildings available and opportunities to increase your Reputation. One of the toughest parts of Against the Storm is learning how to get Reputation. Here are a couple of the main methods: 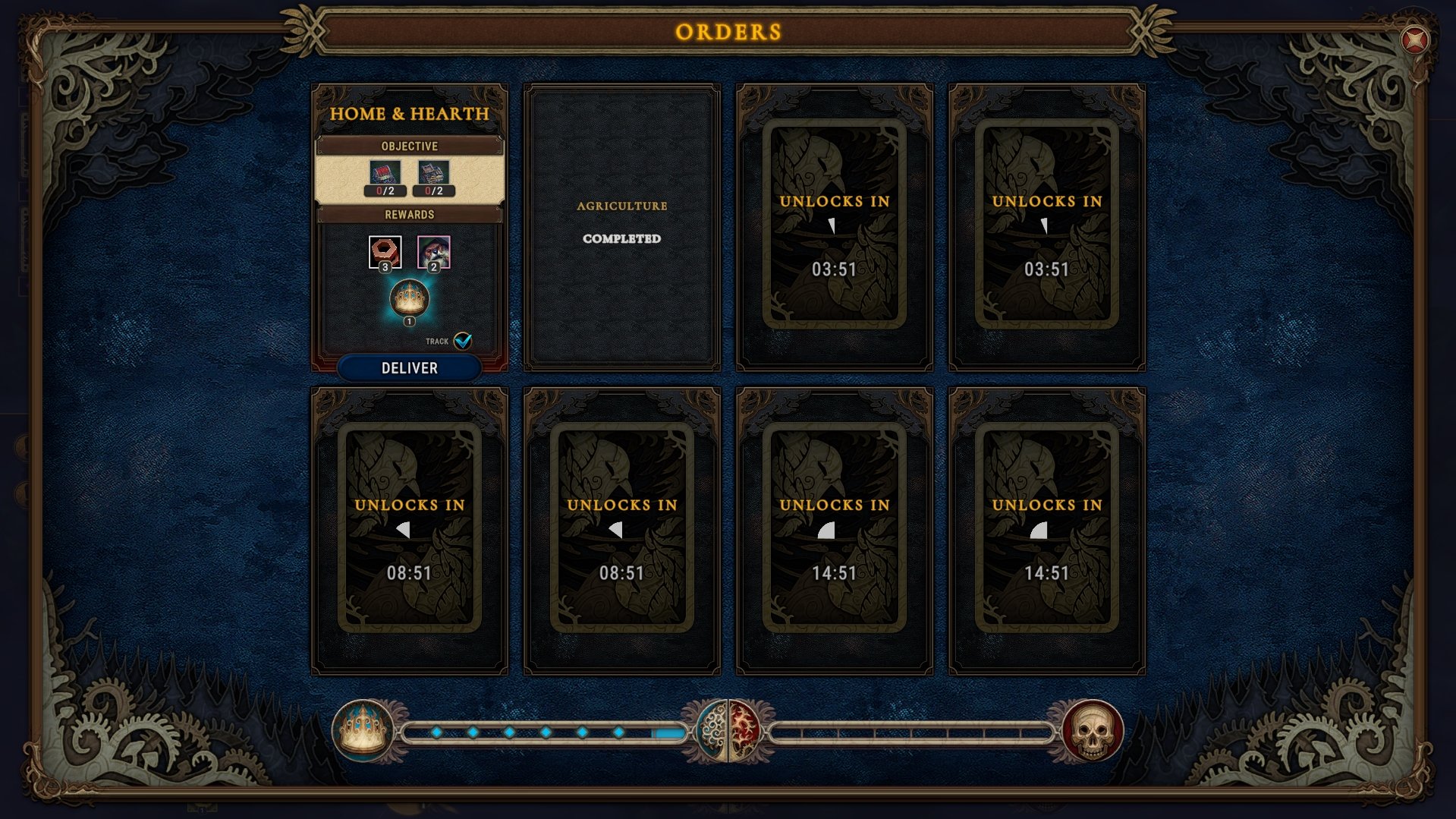 Make sure to prioritize completing orders for useful rewards like Reputation and more.

Over time, Orders will unlock that function as tasks with rewards. You’ll need to pick one of two choices deciding the requirements and rewards for completing it. These are a significant part of Against the Storm since you get Reputation from finishing them. And in the process, it seems to lower the Queen’s Impatience as well.

With that said, it’s important to keep in mind, you won’t always be able to finish every Order. This is because the roguelite mechanics may prevent you from getting the buildings you need.

Tip 3 – Use the Speed Options 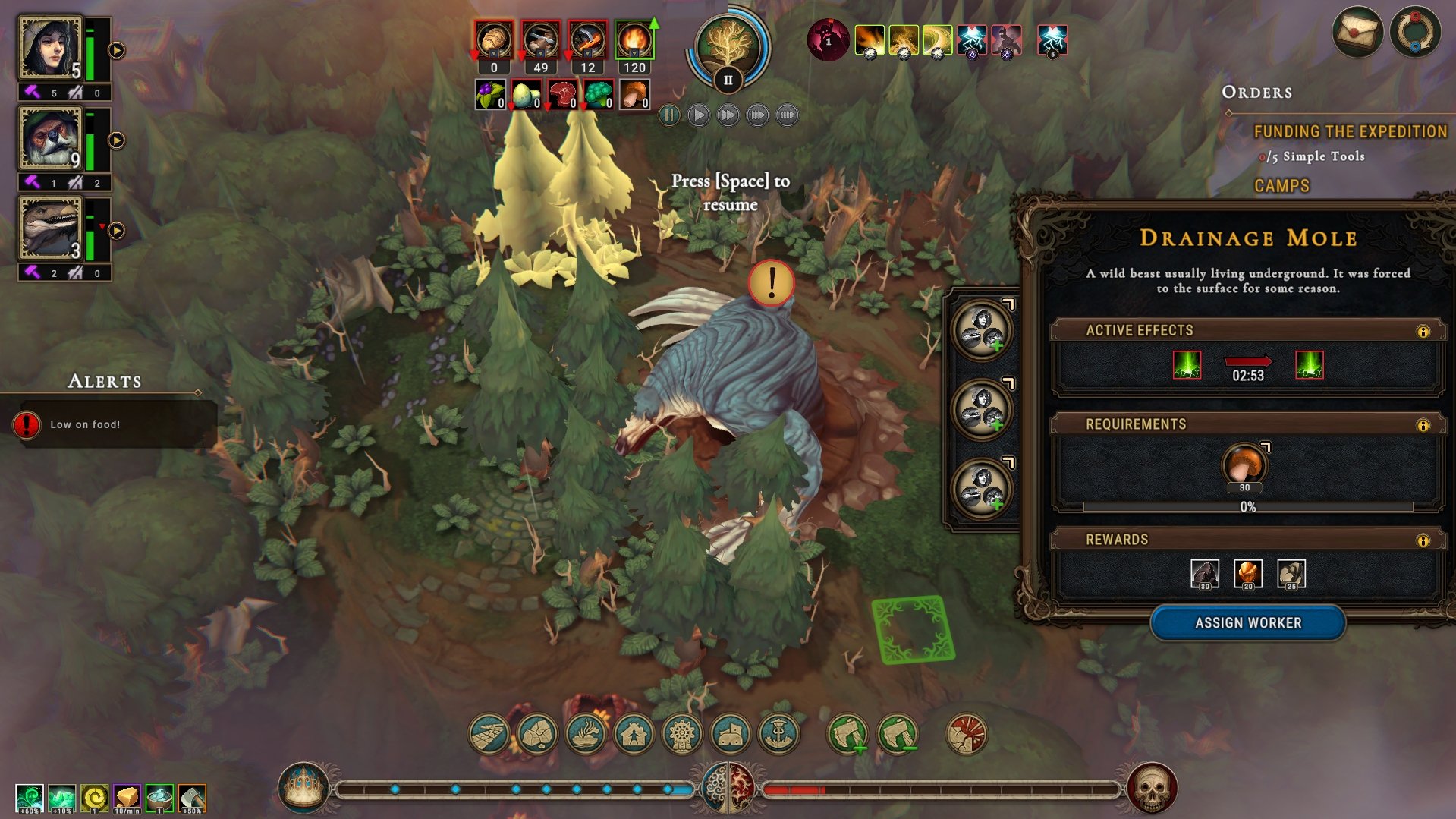 Pausing when a Glade reveal happens and there’s a giant mole is definitely helpful.

This is a simple tip worth mentioning since it can be huge for when you’re waiting a long time. Fortunately, the developer implemented four different speeds, not including the paused option. This is nice to take advantage of when you’re waiting for a storm to go away or beavers to finish chopping a few trees.

Tip 4 – How to Make People Happy 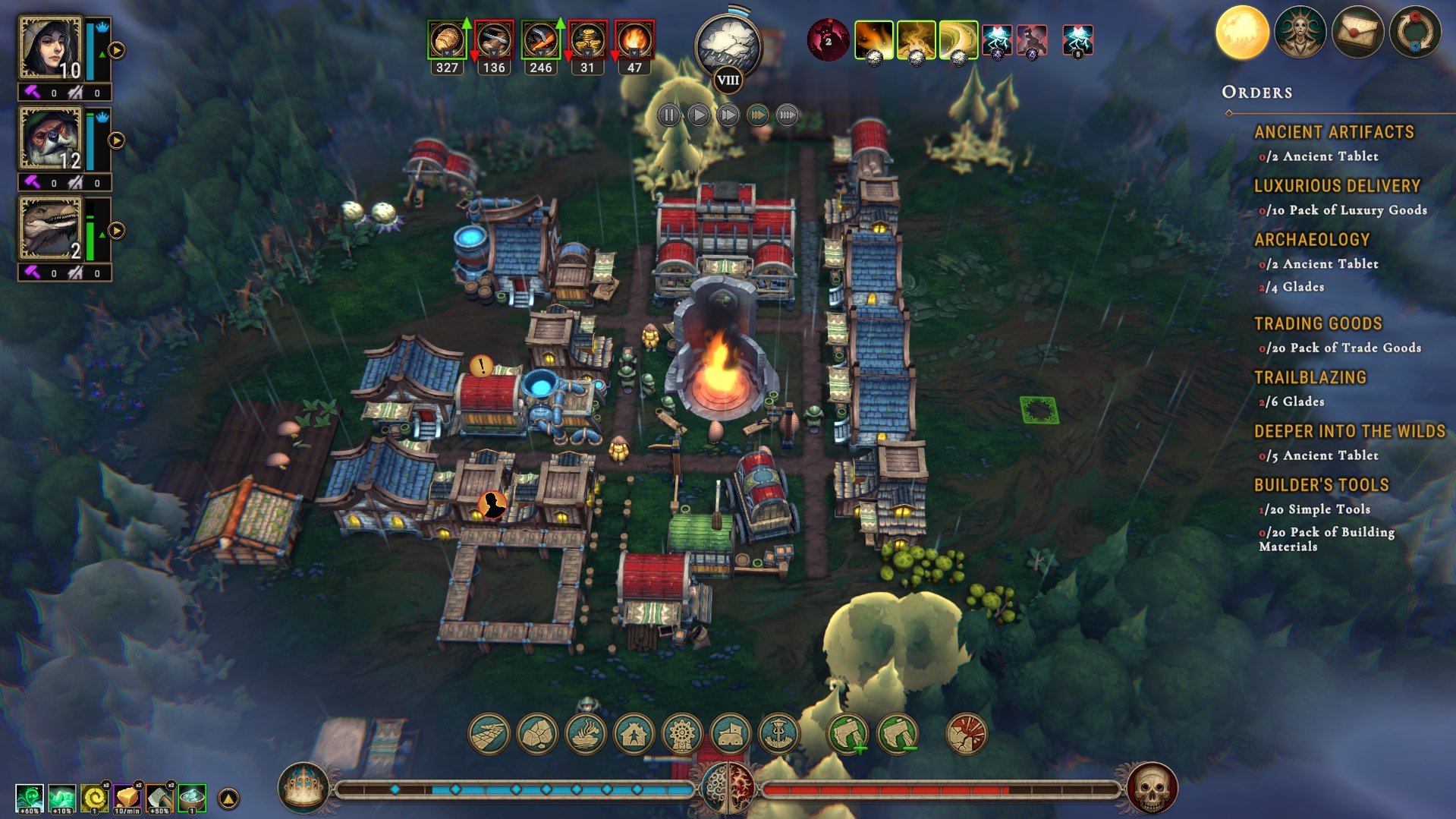 One of the best ways to win in Against the Storm is by keeping your workers happy.

Keeping your Humans, Beavers, and Lizards happy is essential to prevent them from leaving the settlement. Otherwise, you’ll run out of workers and struggle to gain Reputation. This is why it’s important to understand how the happiness system works known as Resolve in Against the Storm.

The top left shows a green bar next to each portrait representing their happiness/Resolve. And a green line above it shows what it needs to reach for them to contribute Reputation. Here are some tips to increase Resolve: 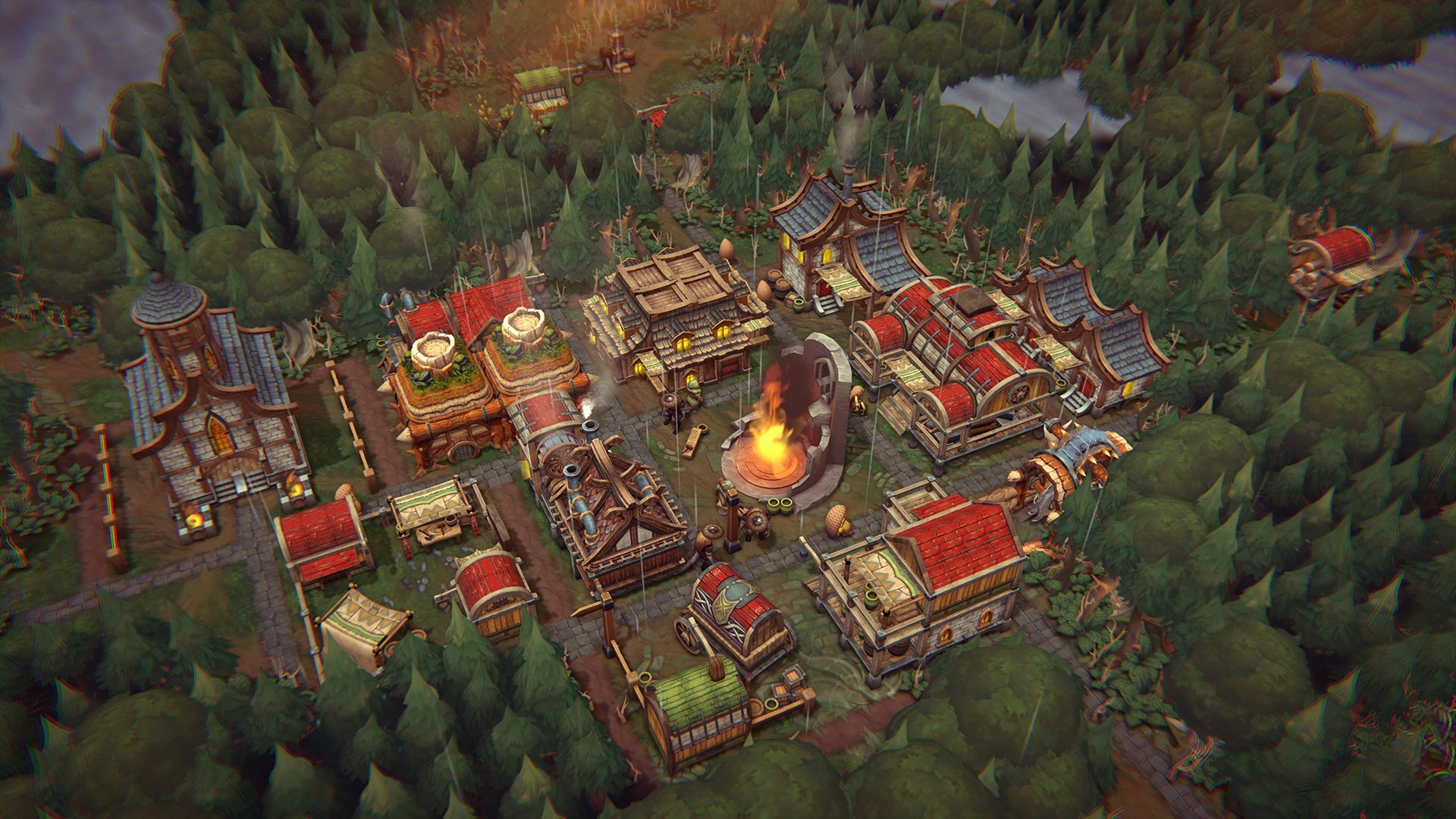 Tweaking the ingredients needed for a recipe goes a long way in making your life easier.

Advanced buildings are a great way to refine materials and produce better food that your colony will enjoy. A useful trick is that you can sometimes change the ingredients needed for a recipe. This helps when you don’t have the default items in your biome.

You’re likely to run into a scenario where you haven’t gotten blueprints yet for a building you need. Or perhaps you have a trader with a resource you can swap the ingredients to instead. And there’s no negative to changing the recipe either. 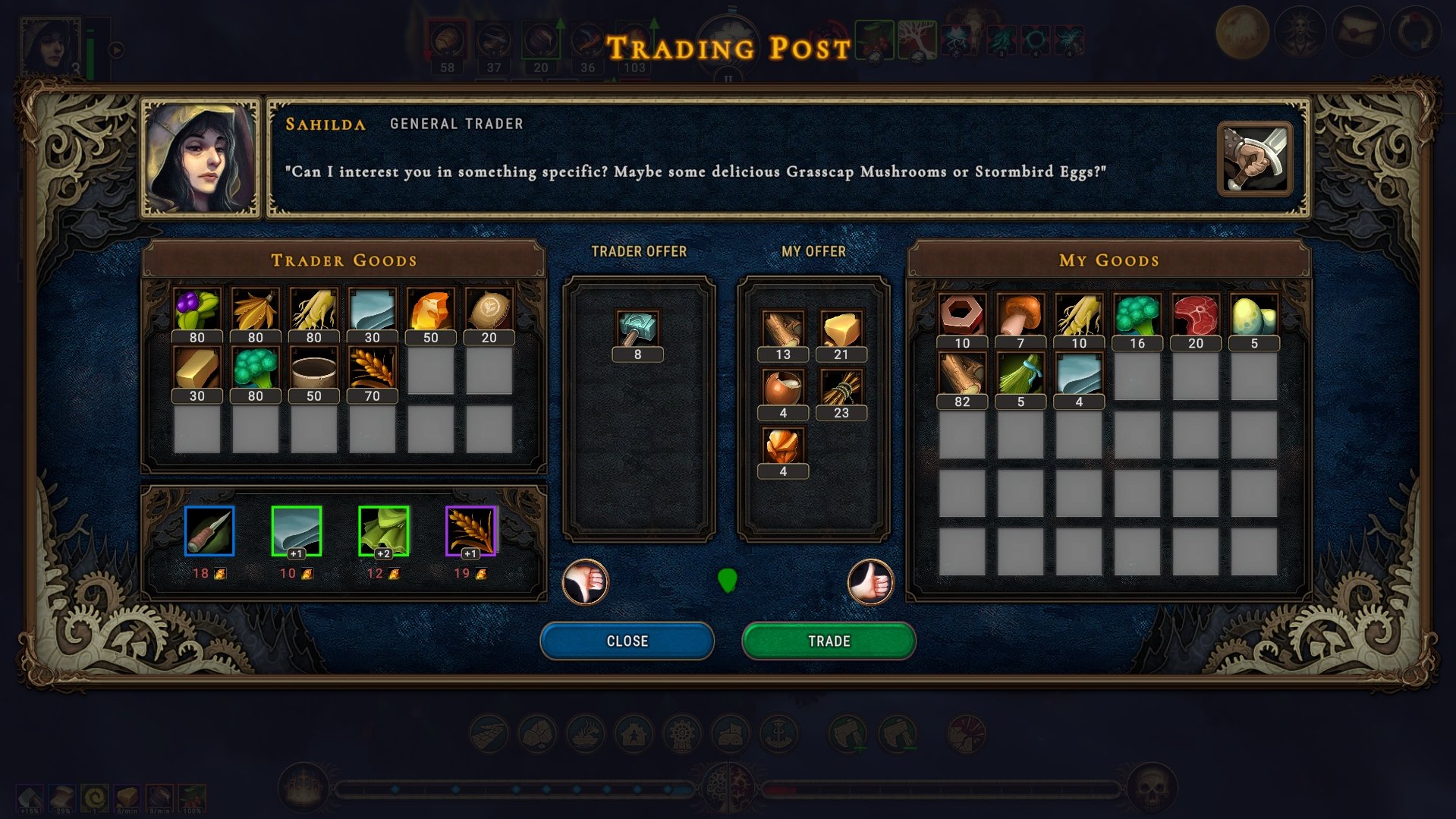 Between bartering for resources you need and useful trade routes, the Trading post is monumental.

The Trading Post is available immediately in Against the Storm so you don’t need to get a certain recipe. I highly recommend building it early on since it’s cheap and definitely a game-changer.

Coming in at only 10 Wood, you can use the Trading Post to barter for resources you don’t have. Chances are the trader will always have food available, but they won’t always have the specific items you need. Also, there are plenty of other benefits such as unlocking blueprints and perks with Amber.

Tip 7 – How to Get Food in Against the Storm 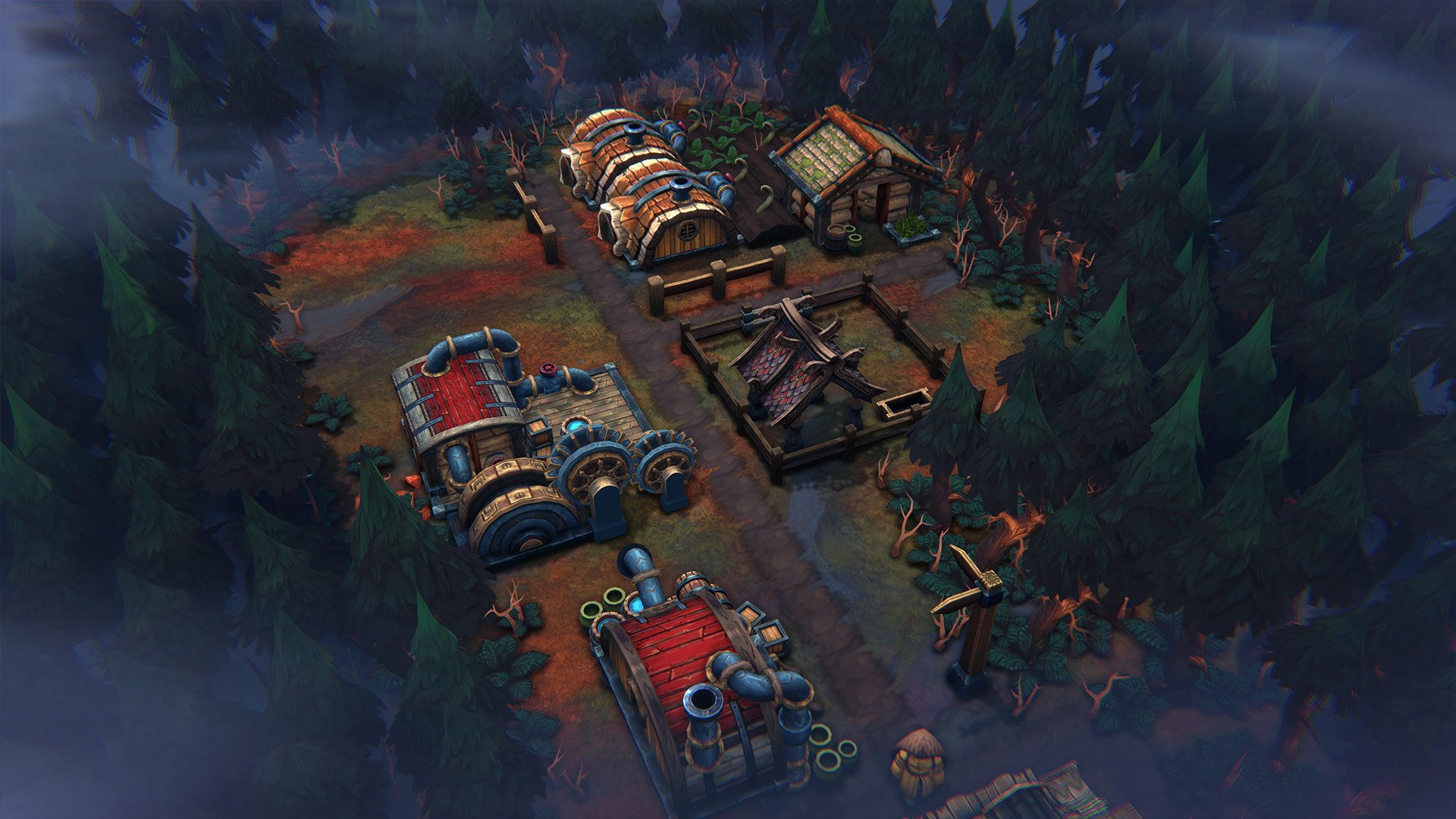 Farms are one of the best ways to get food in Against the Storm even though they’re not always available.

Learning how to get food is extremely important since everything falls apart if you run out for too long. This is because Resolve starts to drop quickly if there isn’t enough food available. Fortunately, there are a few useful tricks for getting food when you’re struggling.

Farming is my favorite method since it’s a renewable source of food that consistently produces. I try to make several farms if I can and connect roads to them. This helps with transporting food quickly and reducing breaks to the Ancient Hearth. However, certain areas won’t have as much Fertile Soil available.

This forces you to search Glades for sources of meat and other plant types. You can definitely take advantage of buildings like the Brewery to make soup. This provides more food than it takes to create. Or you can barter at the trader for food too. 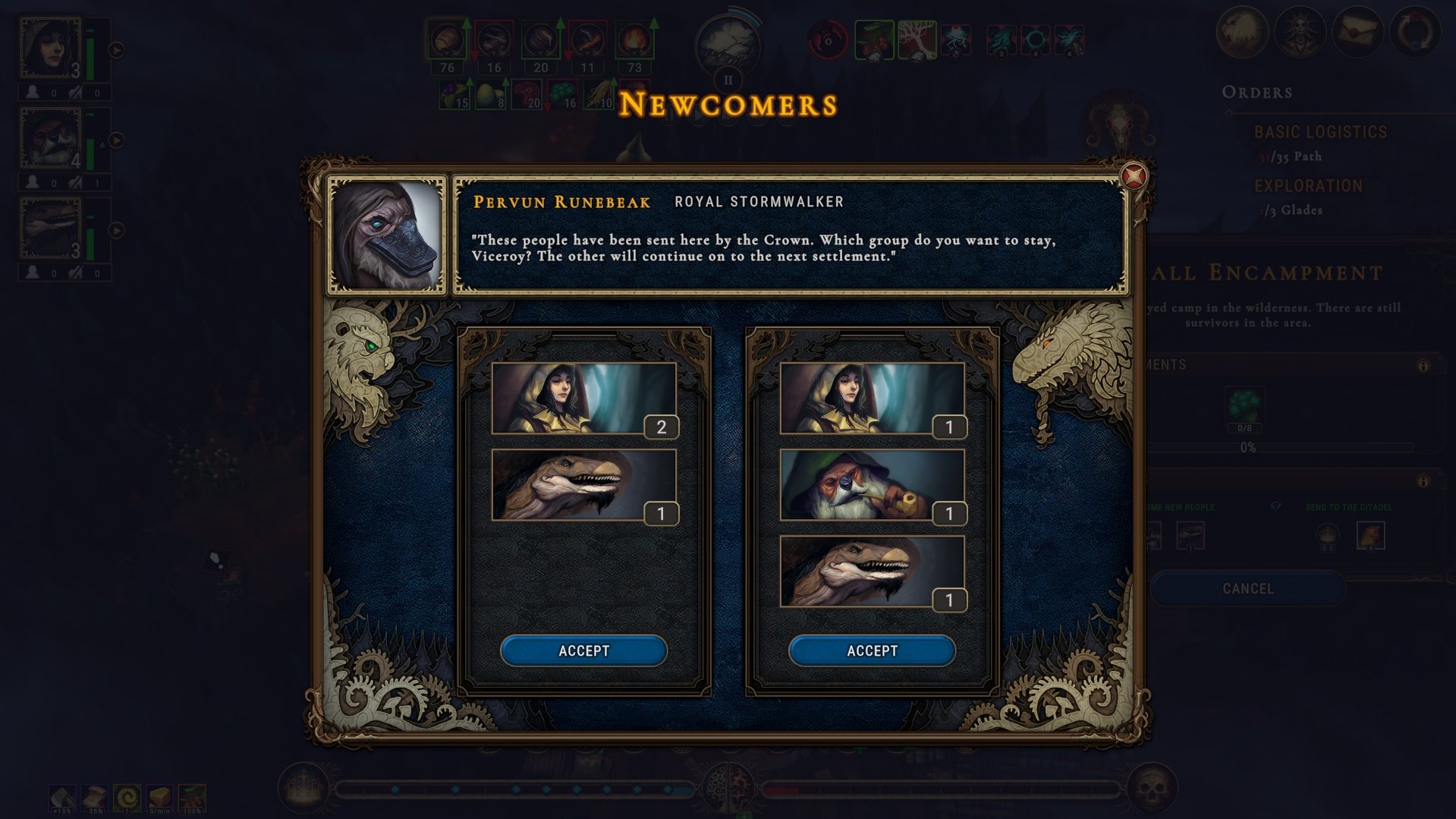 Getting more people into your colony isn’t always a great idea. While it’s nice to have more workers, you need to balance the impact of having more as well. This can lead to their Resolve dropping and more food being eaten as well. If you can’t keep up with the new changes, it may not be worth bringing them on yet.

Sometimes it’s also worth waiting before choosing a Cornerstone since they’re not all great. They’ll both eventually be replaced with new choices if you’re not happy with them. Especially when certain Cornerstones have a negative side too. 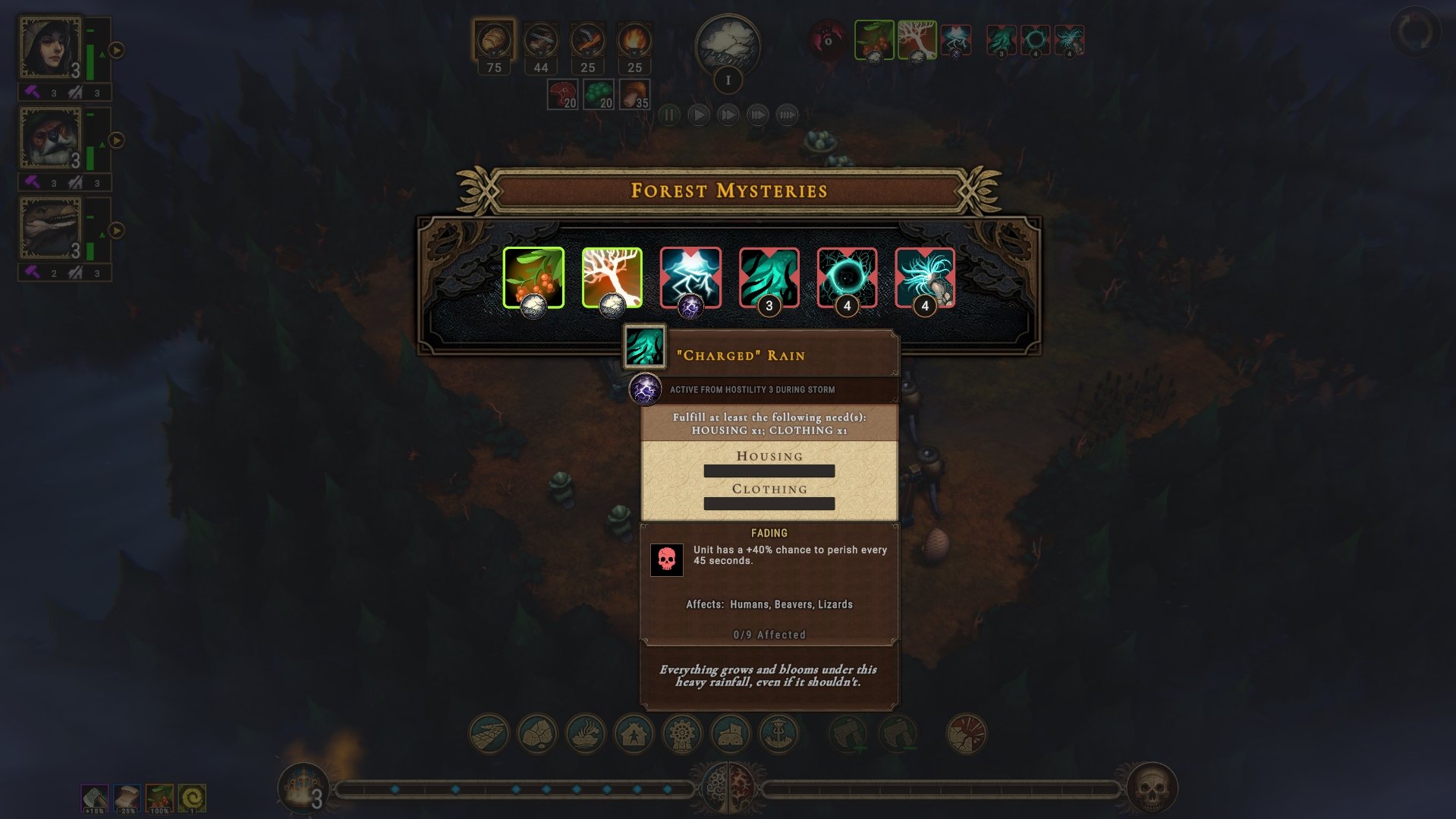 Forest Mysteries are important to pay attention to since they can significantly hinder your survival.

You can play Against the Storm without paying attention to Forest Mysteries but I wouldn’t recommend it. These are mutators that reveal themselves at the beginning of a run that change it slightly. You’ll need to be aware of them since they have both a good and bad impact depending on how you play.

For example, one Forest Mystery provides a negative Resolve modifier when revealing Glades during a storm. This is why it’s important to pay attention to that and try to leave the final tree for when it clears up. Or you can meet certain conditions to prevent negative modifiers from occurring. Just hover your mouse cursor over the icon at the top of the screen to see more info.

Tip 10 – Deciding What Blueprints You Need 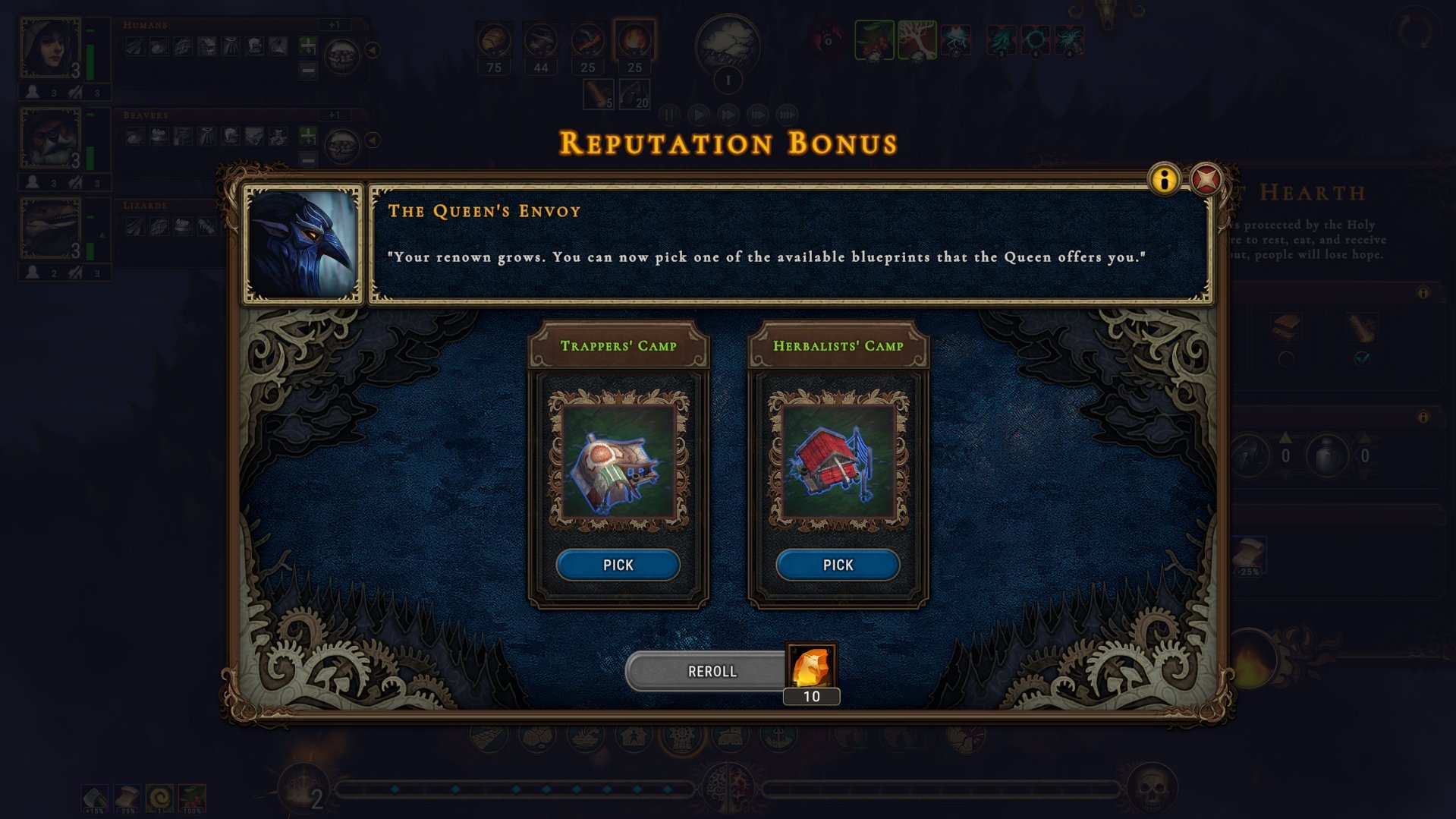 Picking between building blueprints is a tough choice until you understand them well.

Choosing the right building blueprint can be a challenge if you’re still new to Against the Storm. This can be heavily dependent on where you settle your colony since there are different biomes. For example, certain ones are more likely to have farms or meat. In this case, it makes more sense to pick a Farm or a Trapper’s Camp.

Otherwise, you may want to pick blueprints that help you complete Orders if possible. This isn’t easy when you’re at the beginning of a run and don’t know the Orders yet though. So you’re sometimes better off picking what you know and what can help you survive.

That’s all there is to this guide on Against the Storm. If you have any other questions, feel free to comment below and I’ll try to help out if I can.

An Against the Storm key was provided by the developer for the purpose of our coverage.