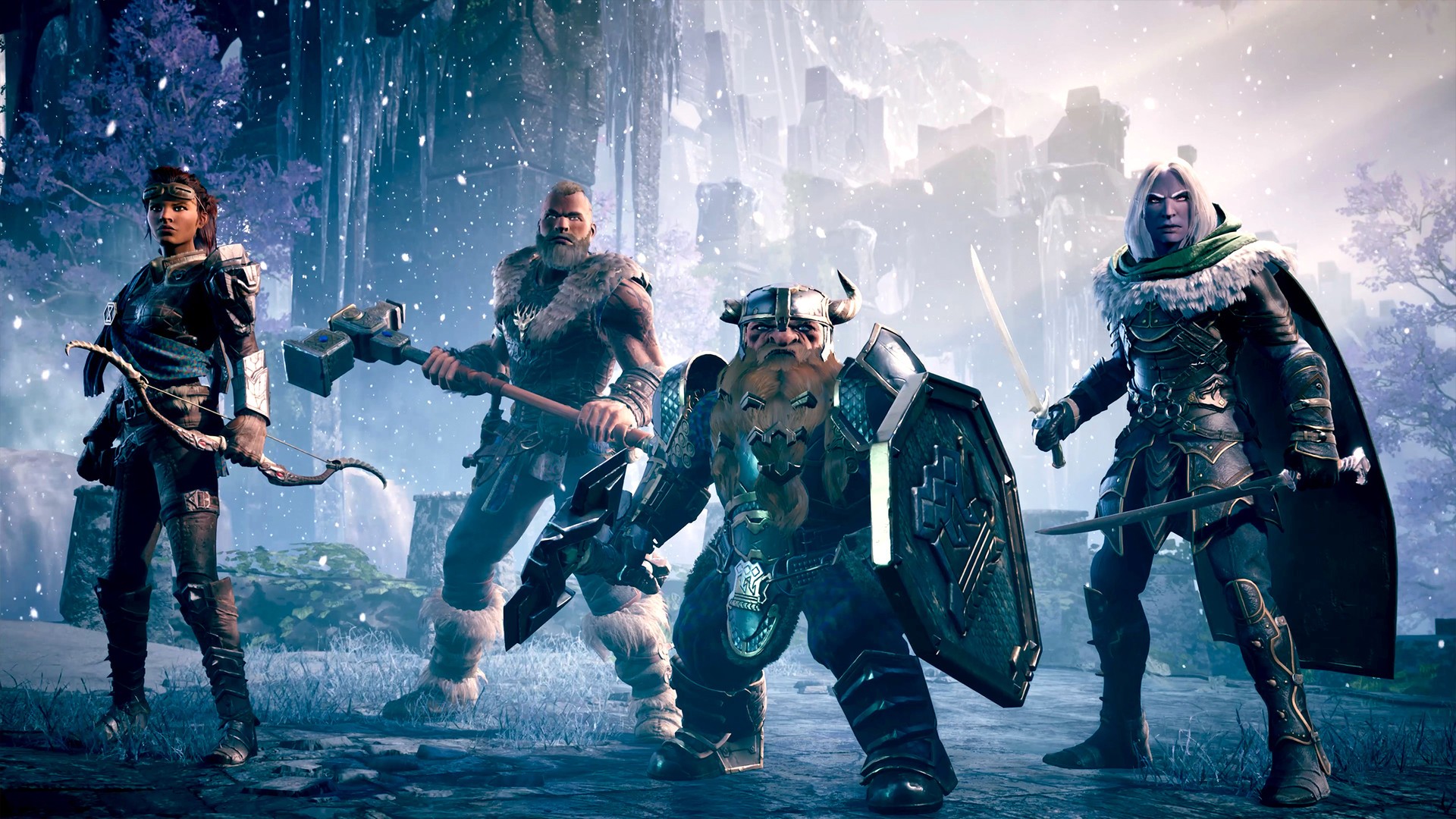 Dungeons & Dragons: Dark Alliance is an action RPG that I’m here to help you get started in. While a lot of these tips are great for those new to the game, there’s useful information for everyone. With that said, there are also a bunch of tricks that you won’t know from only doing the tutorial.

Tip 1 – Watch the Arrows Surrounding You 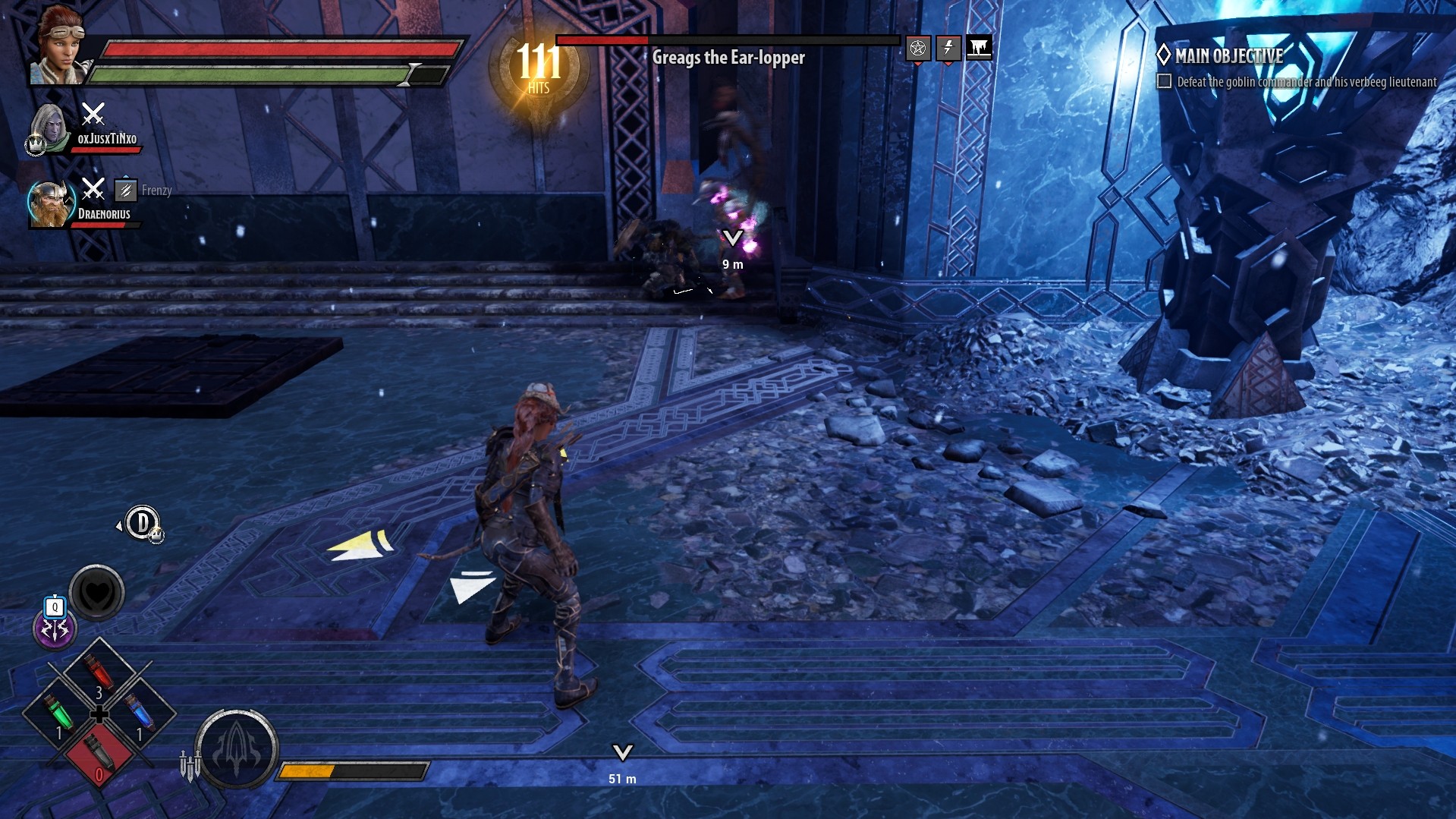 The arrows surrounding your character represent each nearby enemy.

Take advantage of the arrows that surround your character when fighting enemies. If you don’t know better, you might not realize they even exist. However, these represent each enemy around you and when they’re about to attack. This helps with predicting an incoming attack from behind so you can dodge in time.

An arrow is white when an enemy isn’t preparing to attack you. But, when they are, it slowly turns from yellow to red as they hit you. This is why sometimes you’re better off hitting an enemy once or twice and then getting out. As certain enemies attack quickly preventing you from completing combos safely. 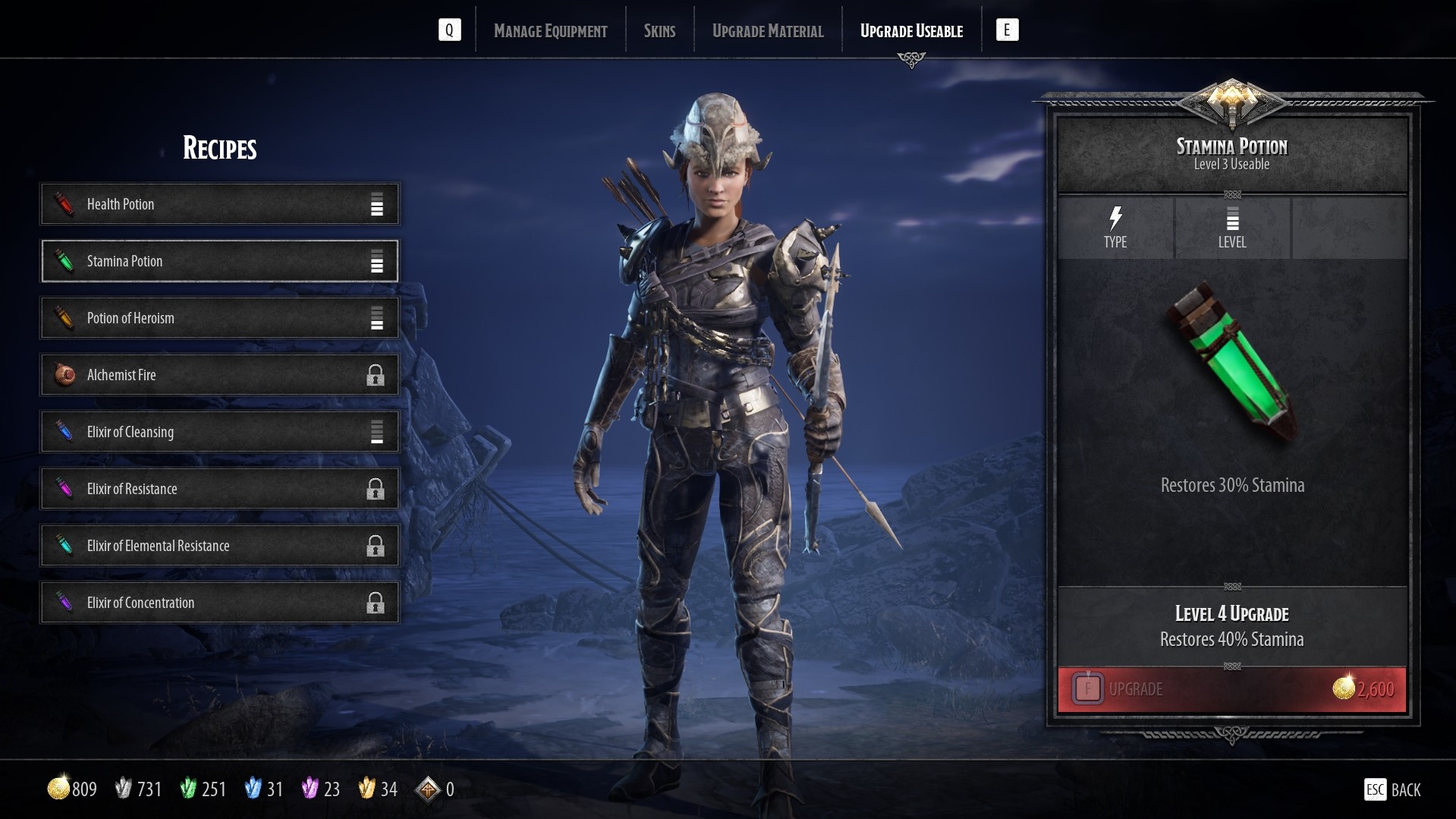 Potions are always a gamechanger for staying alive and strong.

One of the first things you’ll want to spend your gold on is upgrading potions and unlocking new ones. This is a great way to get more out of your potions such as upgrading your Health Potion to restore more. And there are plenty of useful potions to unlock as you can have four equipped at once.

I’m a fan of the Stamina Potion so I don’t have to rely on other methods for getting my max stamina back. While the Potion of Heroism and Elixir of Cleansing are also favorites of mine. Getting my ultimate quicker on Catti-Brie helps with dishing even more damage. And the Elixir of Cleansing removes any frustrating debuffs like poison or fire.

Tip 3 – How to Restore Stamina in Dark Alliance 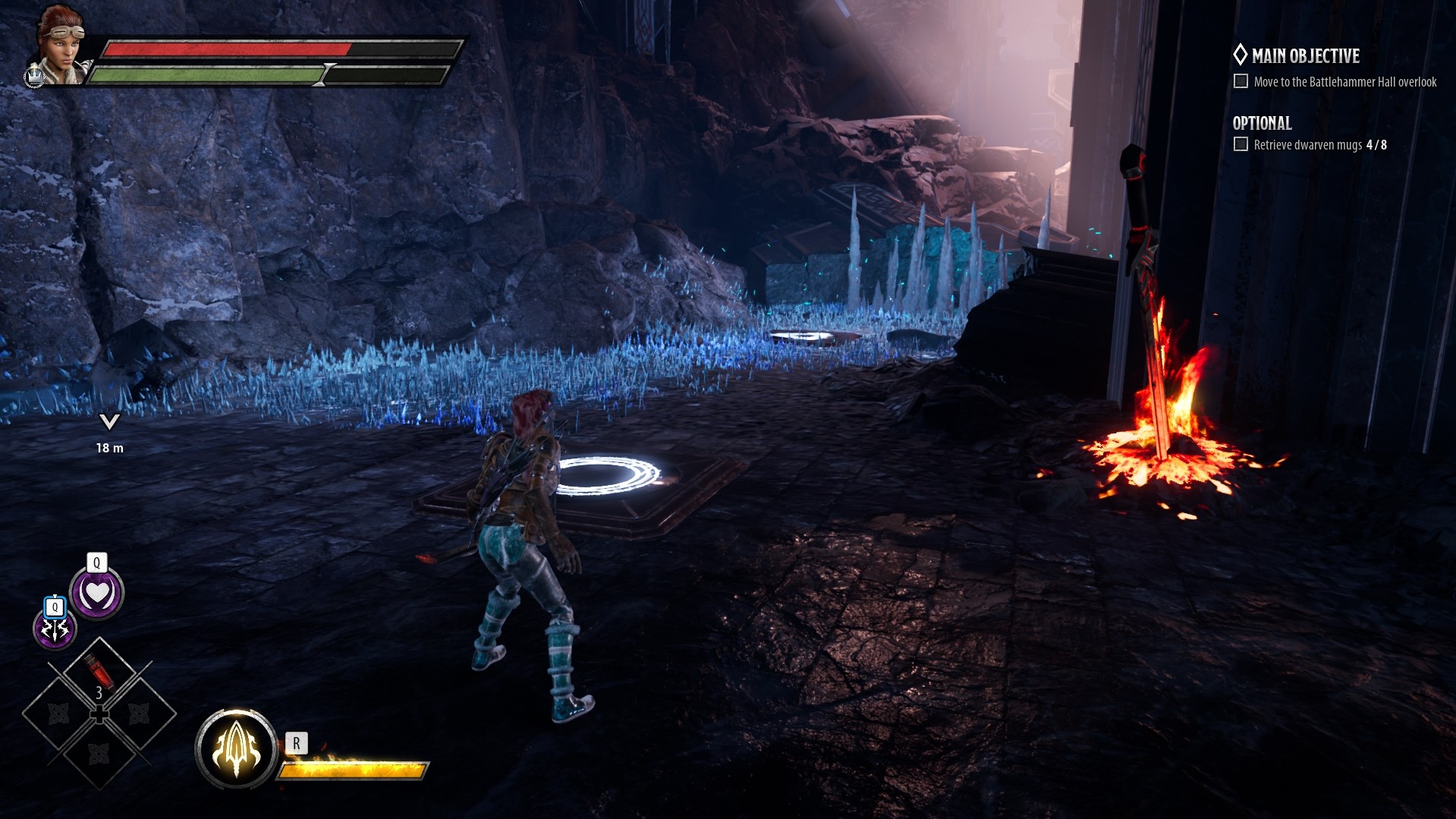 Your max stamina drops as you fight, so it’s important to get it back up.

Learning how to restore your stamina in Dark Alliance is extremely important since it drains from fighting. While you can restore soft stamina without doing anything, your maximum won’t come back automatically. This requires a few different methods such as using a Stamina Potion.

Otherwise, the tutorial mentions that you can parry enemies to restore a small amount. While this isn’t the best way, it works well if you have the timing down. Especially for Bruenor as a tank role. If you don’t know how to parry, all you need to do is block right before an enemy hits you. But, it’s a small window and can be tough.

The final method is to execute enemies. As explained in our how to execute guide, this is another great way to get it back. While I haven’t taken advantage of camp rests, I imagine that would work too.

Tip 4 – How to Unlock New Abilities 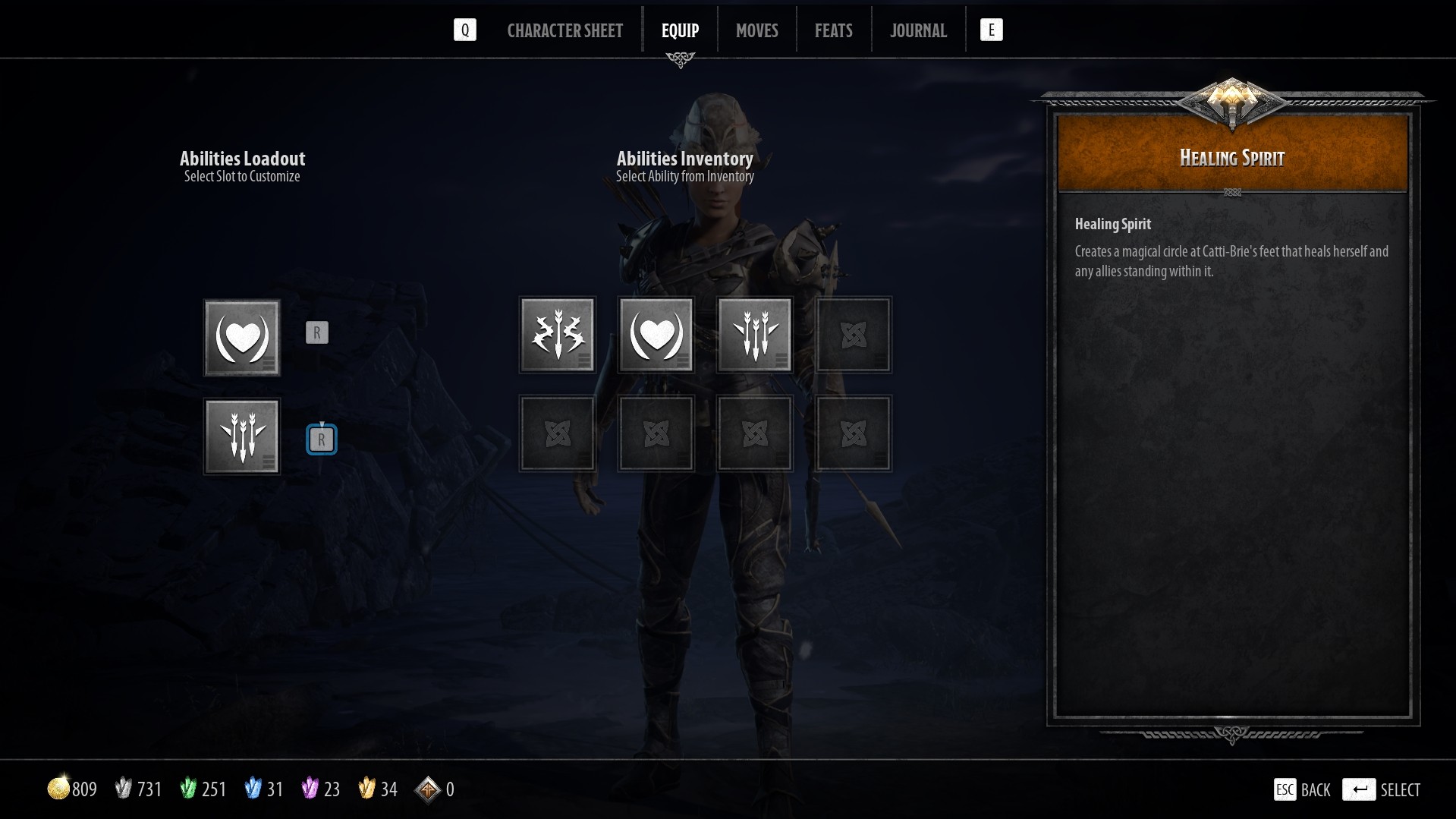 Unlock new abilities so you can try out different active skills.

Another good area to spend gold in Dark Alliance is on new moves and abilities. You can do this by pulling up the Moves menu and unlocking new attacks and abilities too. Once you’ve purchased a new ability, you can equip it on the Equip screen.

Right below all your equipped gear is a button that says, “Abilities”. As shown in the above screenshot, you can only equip two at once but you can swap both out. Unlocking new Moves is a great way to unleash how strong you can be.

Tip 5 – Upgrade Gear at the Merchant 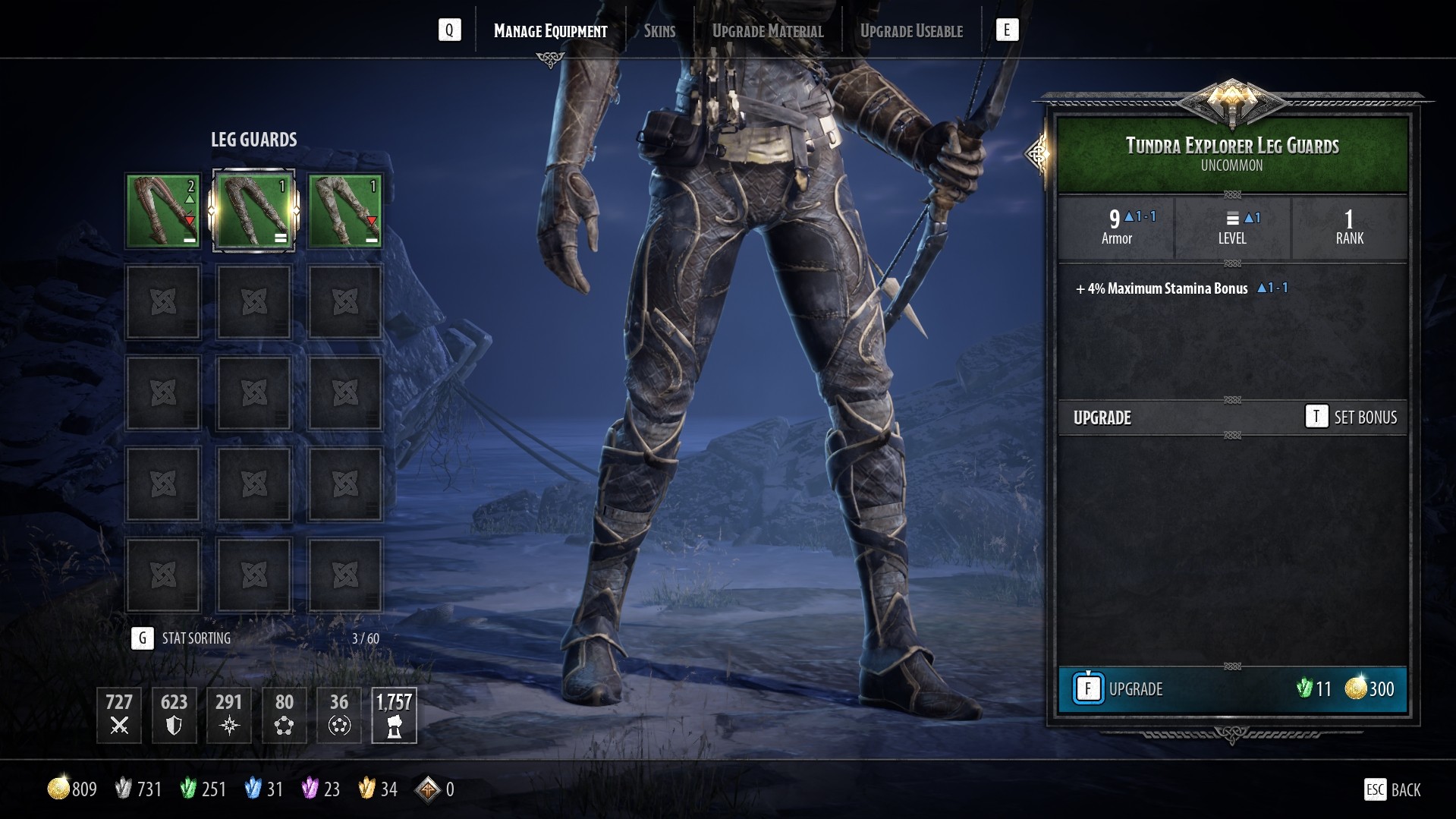 Don’t forget that you can upgrade your gear for stronger traits, armor, and damage too.

While this may seem like an obvious tip, you should upgrade your gear to become stronger. With that said, be careful to not waste precious upgrade crystals when you’re still replacing gear frequently. I don’t mind upgrading Uncommon (green) gear because I’m loaded with those crystals and it’s not too expensive.

But I’m much less likely to spend my Legendary (orange) crystals without thinking about it. Even though I have a rank 1 Legendary chestguard, I’m holding out for something better. 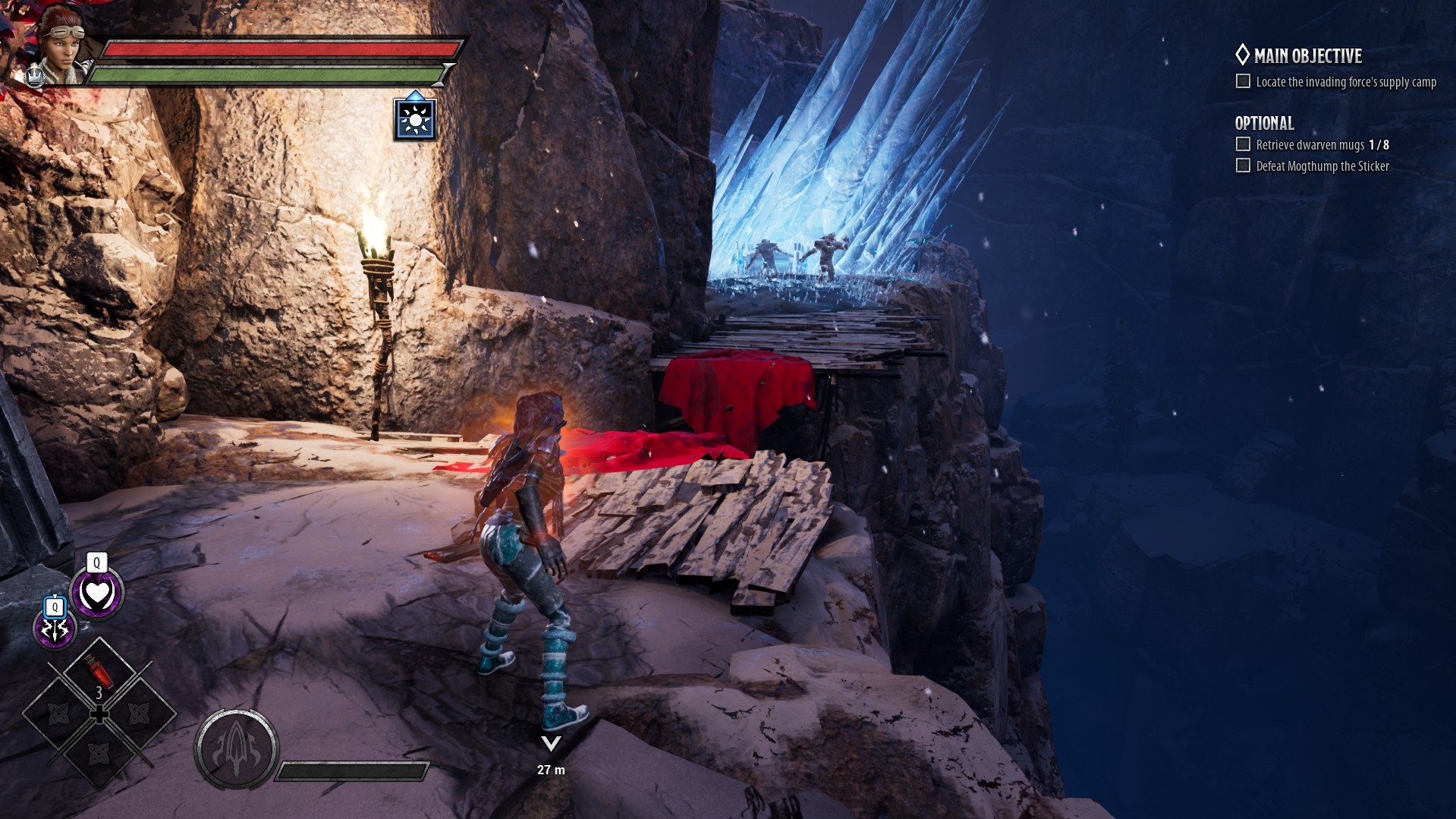 Keep an eye out for red cloth marking paths out of the way that have hidden loot.

Every level is filled with alternate routes and secret loot hidden behind destructible objects. This is why it’s important to break barrels and walls every so often. You may notice a glowing blue chest hiding behind a weak wall. Or gold on the ground hidden beneath a barrel.

Another neat Dark Alliance tip is to loot for bright red banners and cloth that stand out. This is usually a sign that you should go that way or break an object to find something. It could be anything from an alternate route to a secret chest.

Tip 7 – You Can Skip Enemies 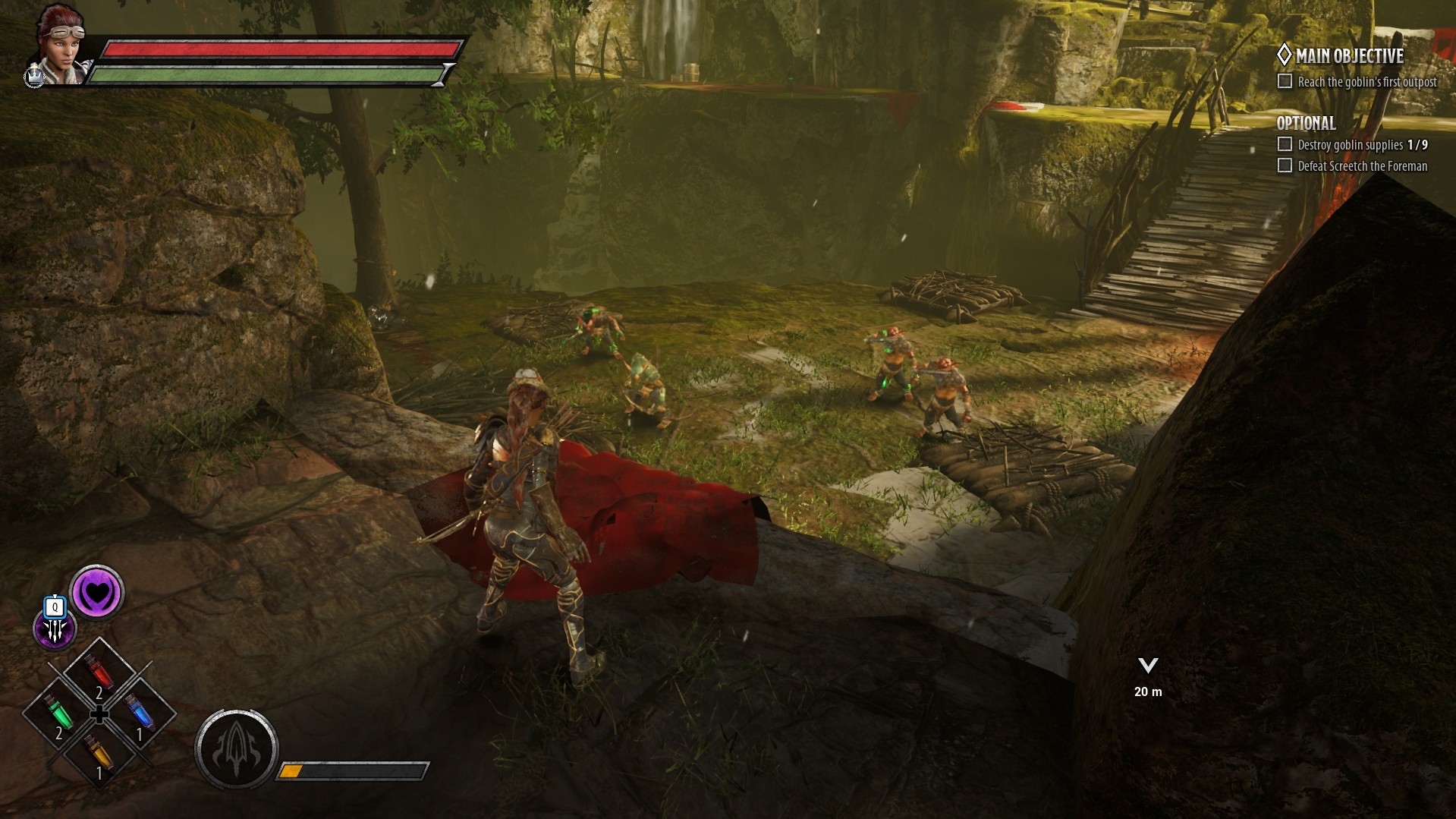 Sometimes you’re better off running past a group of enemies if you can’t beat them.

If you’re in a rush and don’t mind getting less experience, you can often skip groups of enemies. Unless an objective requires defeating them, you can usually run right past. Sometimes you’ll come across a purple forcefield preventing you from moving forward as well. In this case, you’ll want to take out any nearby enemies.

Otherwise, I like taking advantage of this when I’m playing solo and wipe. There’s nothing more frustrating than having to run through all the same groups of enemies again without the benefit of camps. Sometimes you just want to complete an area and move on to the next one. 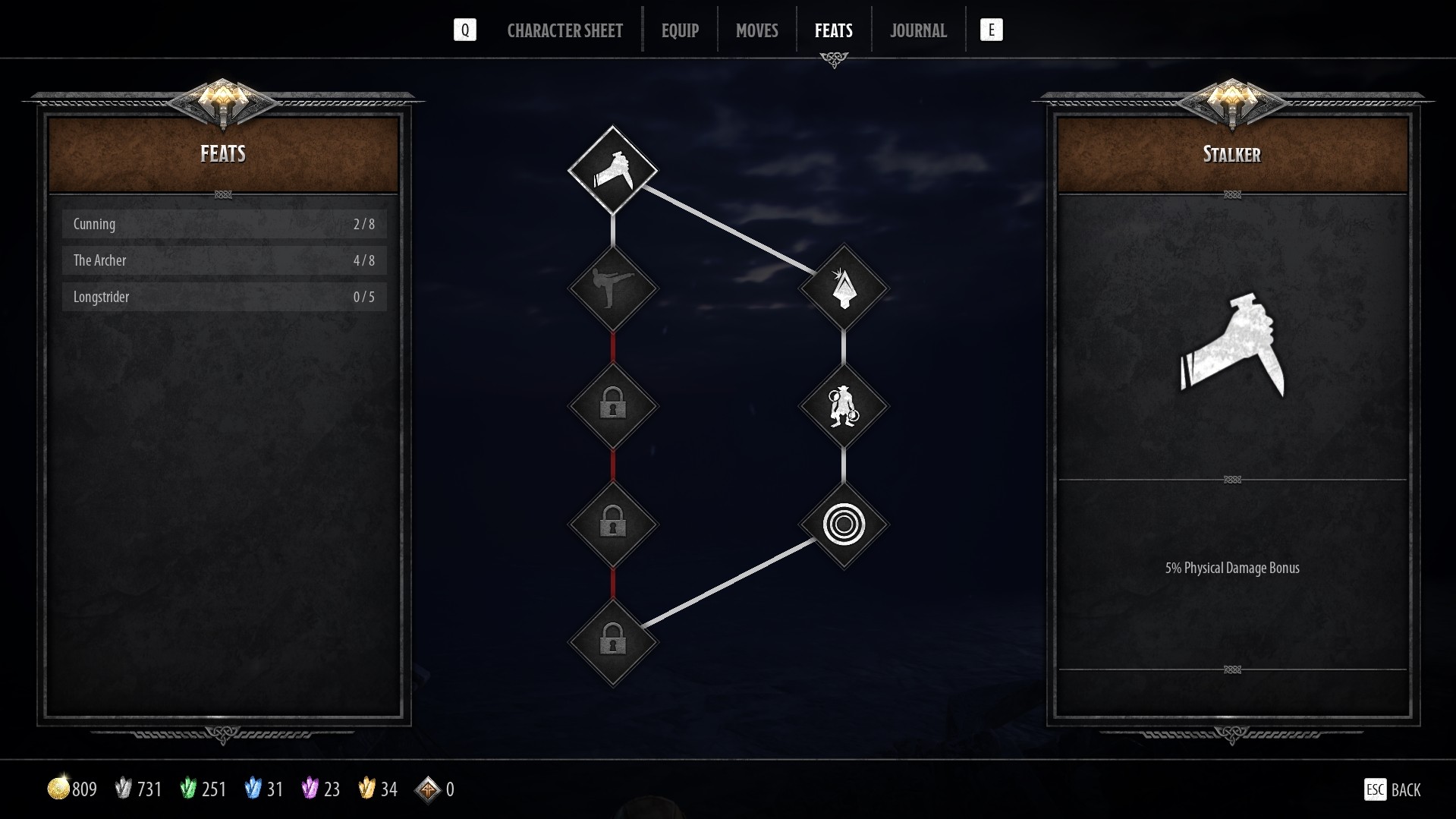 Attributes and feats can make you much stronger through passive upgrades.

Make sure to spend your attribute and feat points every time you level up. These will help you continue getting stronger and even create your own build. However, be careful of spending your attribute points without thinking about it. You can’t reset these points and will eventually hit a limit at the max level of 20.

With that said, the Dark Alliance developer stated you can unlock every feat and move by the time you reach the max level. So make sure you know how you want to build your character in advance unless you don’t care too much about your attributes. You can still make up for it with strong gear and a good team.

Tip 9 – Team Up With Other Players 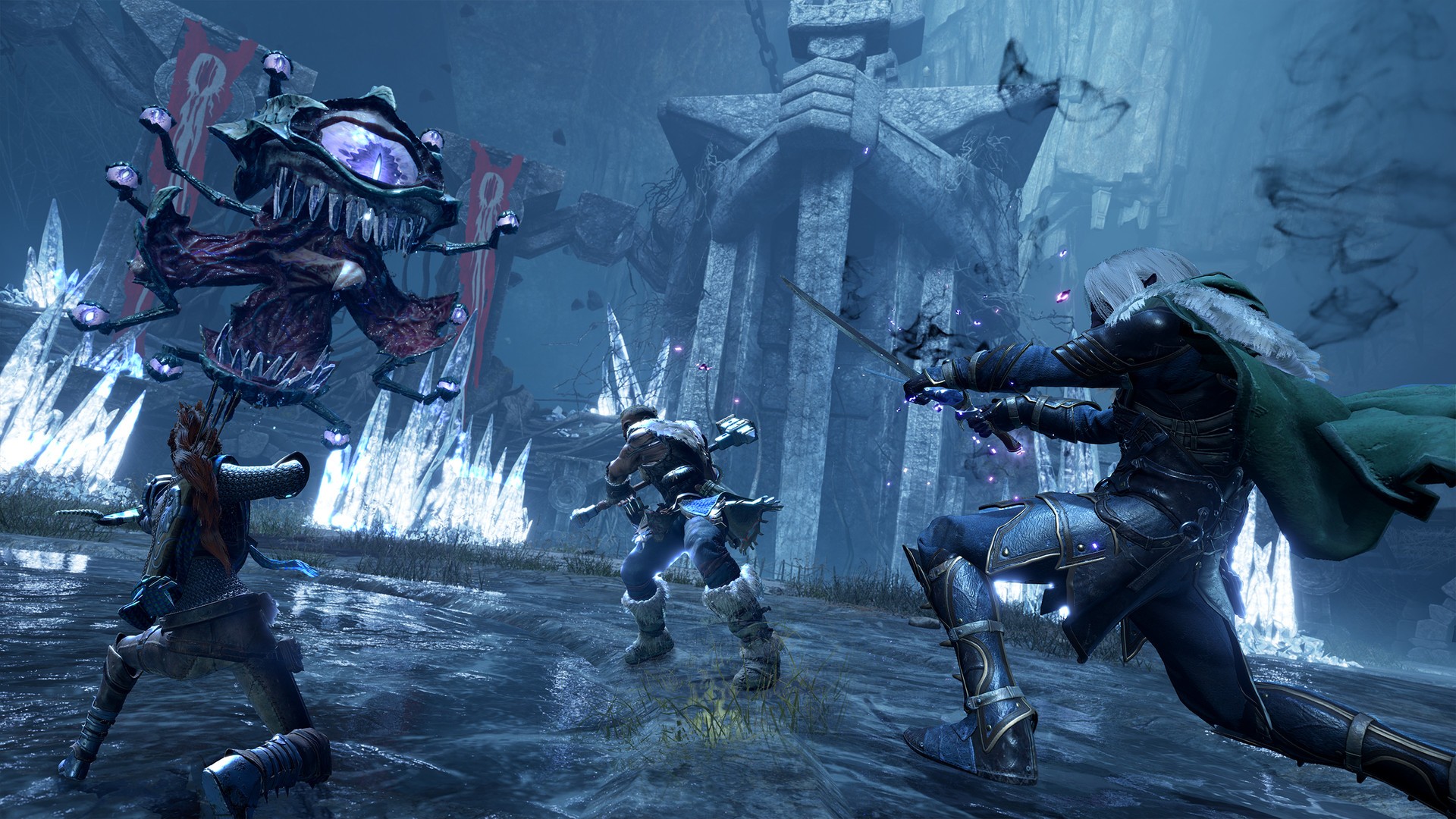 There’s no need to complete every mission solo unless you’re a glutton for punishment.

This should be an obvious tip, but you’re always going to be better off with a team of players. Assuming they’re not constantly dying and holding you back of course. Dark Alliance has a mechanic where teammates can combo attacks together called Team Attacks. Aside from that, every character has a role that makes them vital to the team.

I’m a fan of playing Catti-Brie and healing my teammates with Healing Spirit. This makes it easier for my team to stay at full health without needing to use Short Rests at camps. 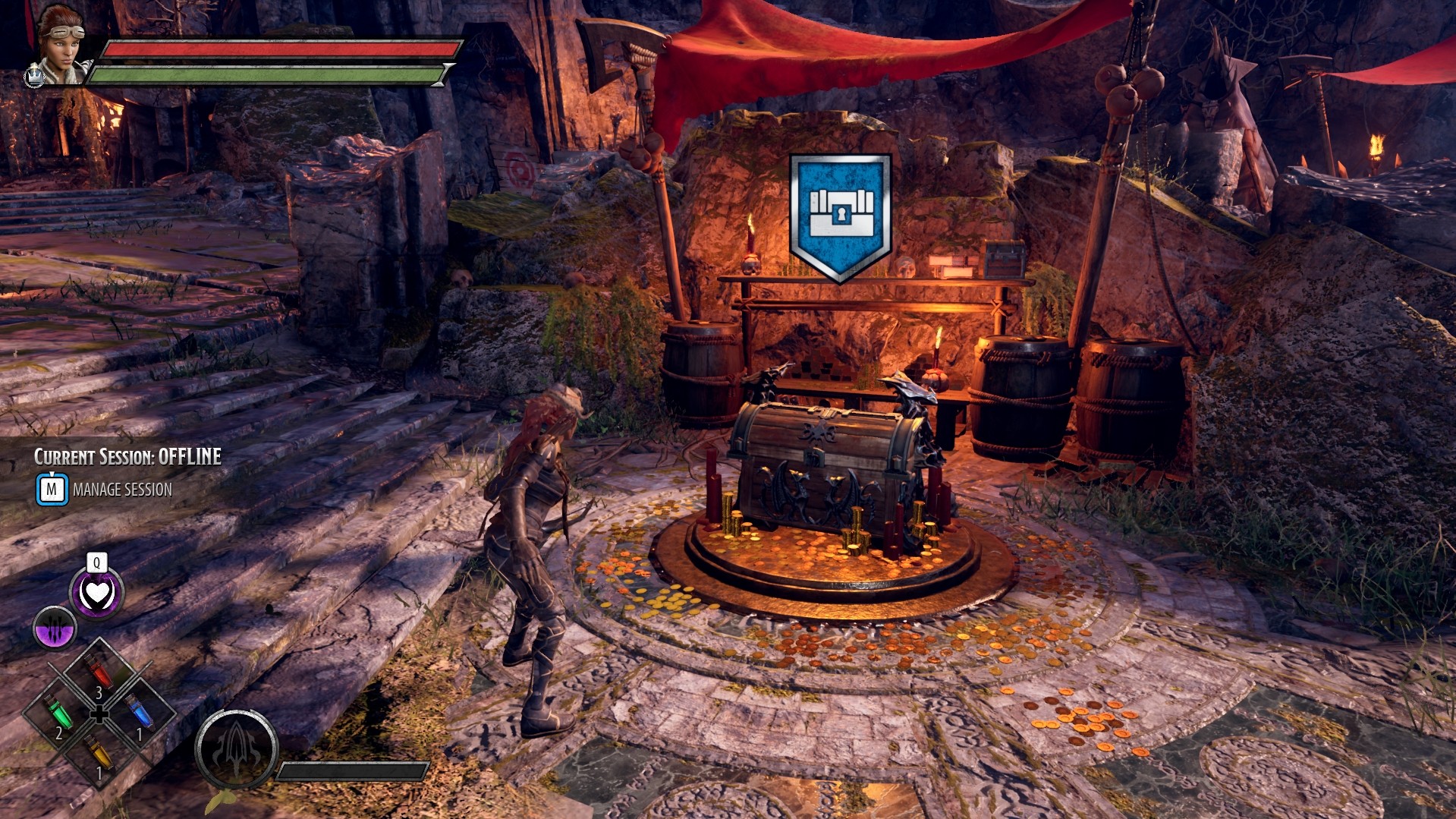 Make sure to check the Reward Chest for new loot to equip in-between missions.

Because of the way Dark Alliance works, you’ll never get new loot immediately during missions. While sure, you can get new gear and weapons from a chest, you won’t know what it is until afterward. This is because you need to visit the Reward Chest back at camp to find out what that Rare Quiver actually is.

This is why it’s important to equip your armor and weapons before jumping into a mission. You can’t change what you’re wearing once the mission starts.

That’s all there is to our tips and tricks guide on Dungeons & Dragons: Dark Alliance. If you have any questions for us, feel free to comment below the guide. I’m currently working on more guides to answer common questions in the community.