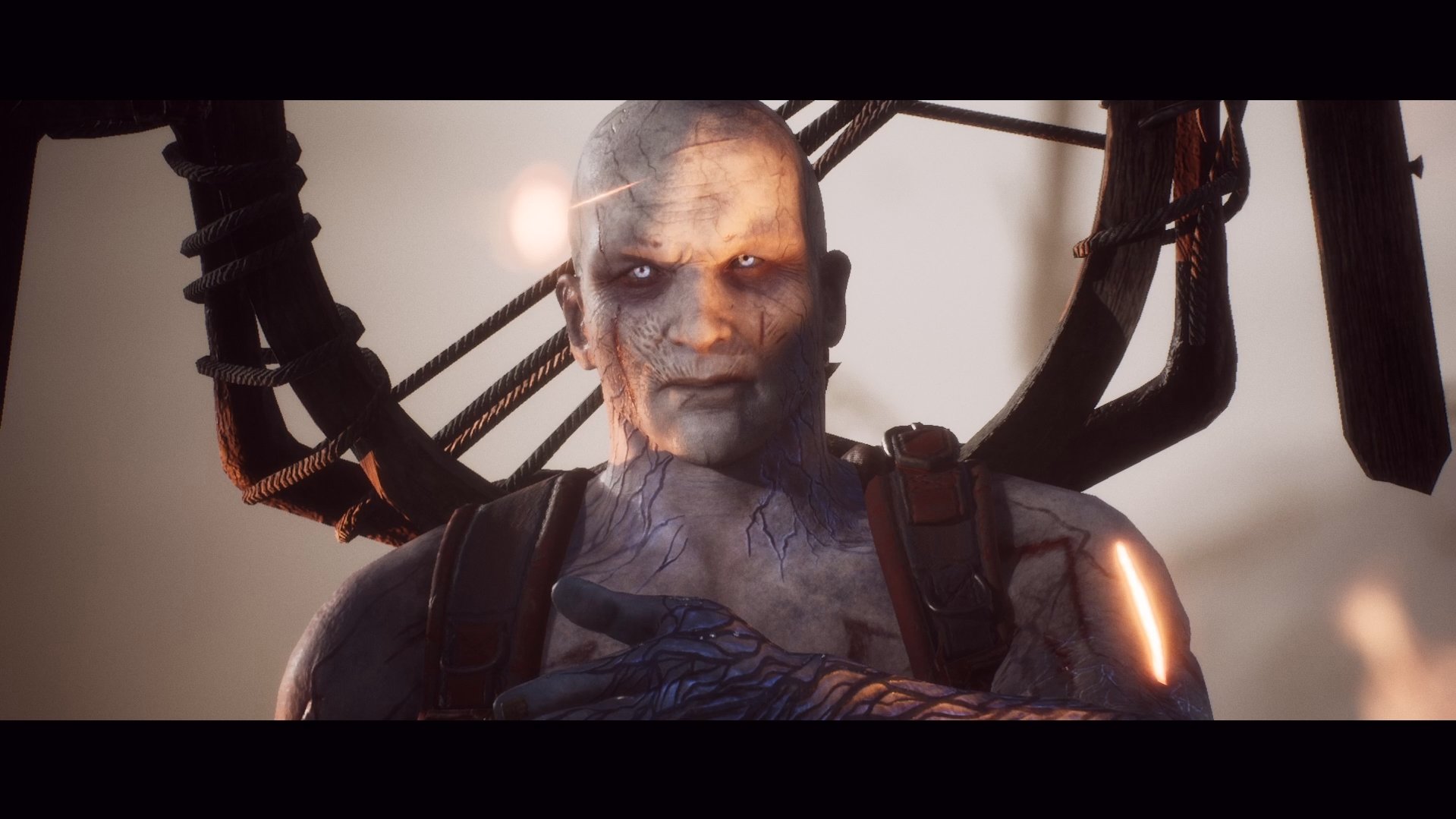 If you’ve made some progress in Outriders, you may have come across an early Altered character named Moloch. You first fight him during the Onslaught mission when working with Trench Town to capture an Insurgent bunker. This is where you likely noticed he has a small shriveled man on his back. Continue reading below for all information in Outriders regarding who this is.

Quick disclaimer that spoilers regarding Moloch are below. These aren’t significant to the main story, however.

What is on Moloch’s Back in Outriders 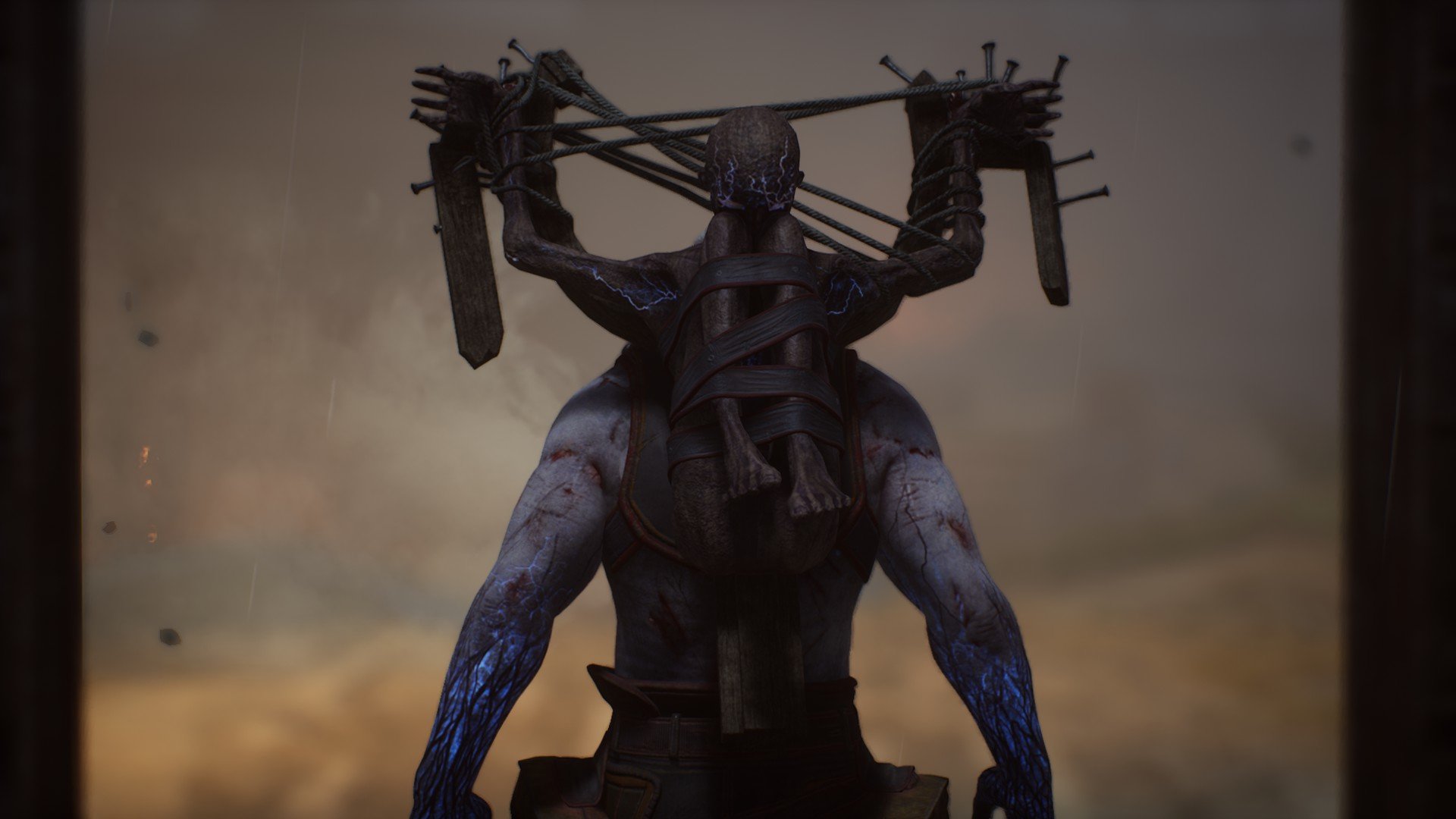 When you first meet Moloch, he never refers to the body on his back. The only bit of lore that sneaks through here is when your character says, “My fight’s not with you.” Moloch then responds, “Oh, it is now. You fight with them.” Without any context until later, this statement doesn’t mean anything. However, he’s talking about his disdain for the Enoch Colonization Authority (ECA), which you’re a part of. The ECA indirectly led to Moloch’s transformation into an Altered form.

There’s a side quest named The Scientific Method where you come across journals written by Dr. Alkesandr Rostropovich. These journals reveal that Rostropovich was working for the ECA in creating a weapon to fight Altereds. In doing so, he experimented on humans for the ECA until they cut his funding. However, that didn’t stop him from continuing his experiments. After several failed attempts with subjects dying, he mentions one named Subject Number Six.

It soon becomes clear that Subject Number Six is Moloch before he became Altered. Dr. Rostropovich created Moloch’s altered form by exposing him to a source of Anomaly in his lab. This led to Moloch’s extreme hatred for both the doctor and ECA. Eventually, he escaped and as shown in a cutscene during The Scientific Method quest, he killed the doctor. During this cutscene, Moloch says the following,

“Did I ask you to wrench me from darkness? To make my soul a puppet, like you were my god? You experimented on me like a rodent. And now, you’d shove me back into darkness. No! It is you who shall be known by darkness. And all who claim falsely to be gods.”

This is where things start to get interesting when you combine it with a journal entry after fighting Moloch at Trench Town. The journal directly addresses the man on his back with a little mystery. Here’s the excerpt below,

“Moloch appears to carry a shriveled man on his back, crucified to a cross-like harness, but still somehow alive. Is he a prisoner, forced to suffer witness to all the death and destruction the Altered leaves behind? Or could it be that this vestigial person is somehow in control — the real Moloch, using a mindless meat puppet as its vehicle?”

The puppet reference twice makes me wonder if the journal theory is correct. It sounds as if Moloch may actually be the shriveled man. You can see the Anomaly runs through the shriveled man and he moves once slightly during the first fight cutscene. Eventually, you actually kill Moloch during endgame content and a new journal entry appears. Unfortunately, it states that the story behind the shriveled man will remain a mystery. This is during the Frontline expedition for those looking for it. 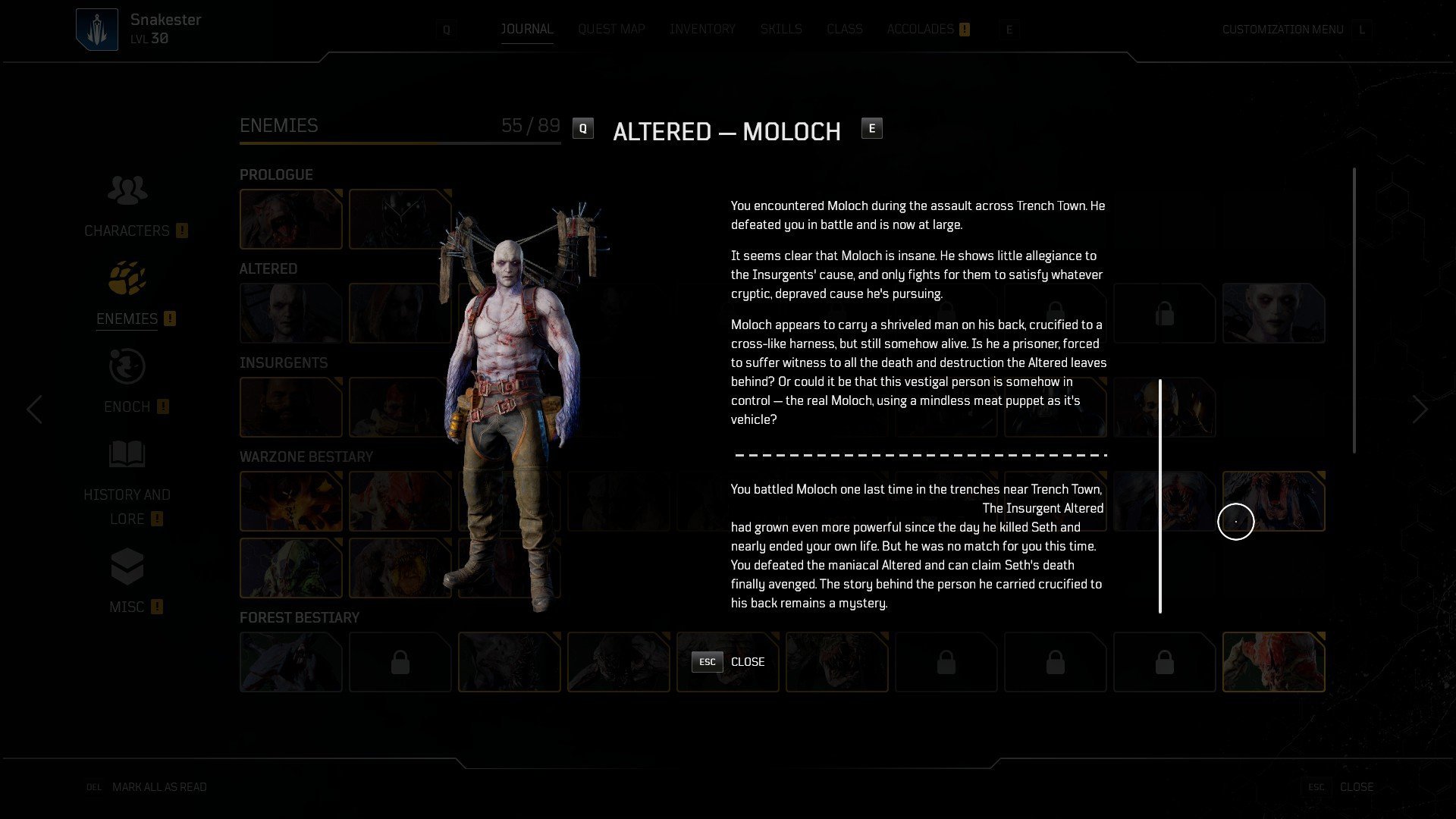 Click the image to zoom/expand it. A small portion of the last paragraph has been removed to avoid major story spoilers.

One odd bit regarding his story is that he’s clearly against Altered people, but sides with the Insurgents. This could be a temporary evil to work with. But, the Insurgents are ruled by “…Altered Warlords, who believe themselves to be gods.” This doesn’t quite line up with the story that Moloch is against “all who claim falsely to be gods.”

Regardless, that’s all there is to know about Moloch that we’ve found in Outriders. If you come across any other content or have a theory, be sure to let us know in the comments below the article. We’d love to know what you think.

So I know the earliest comment on this was a month ago and I may have missed something new that came out within the games development, but I really enjoyed reading these theory's so I would like to state mine. I am well aware that its a long shot theory still extremely enjoyable to roll around with... Ok so what if the body on Moloch's back is the "first altered" the one that seth originally defeated in the lore? Now in the story it never truly claimed to have killed the "first altered" only that he was disposed of in a dark precipice. Also in the story the doctors lab and where you find the doctor's corpse is by a near by underground! pit with the slightest bit of light coming through. So this would mean that during the last experiment that "moloch" endured or didn't the "first altered" interfered possibly? "Moloch" is indeed a "puppet" but I see it is more like a venom suit situation or maybe even a angelic whispering promising salvation if he gave his "vessel" willingly to the shrivel old corpse that still had the altered's capability to steal, transfer, release, or store anomalitic energies. Allowing not only explanations for how he was able to escape this time, when he never could before, and also why this time was so different then every other time he was exposed to the "anomaly source". Then lastly something I had forgot to mention before was that seth clearly says that his mission was far more important, that it was his duty to stop this terror "once and for all". The way they played that scene out to me was as if seth was once again reliving his first moments as a altered. When he was the sane savior of the ECA. Now this is all what I had personally put together from what I had seen from the game. To me it seems that "Moloch" and the "corpse" are on sync not any form of enslavement or forcing either or to each others whims more of a symbiotic relationship.

Let me know what you think of it. hope it at least is worth a interesting take in the limited info given.

Well in the game headshots are 100% crits, if you try to get a headshot crit on Moloch (normal altered body), you will find out that it is impossible. But if you go around or if you aim properly on the Moloch's true head on crucified body, you get the headshot crit.

This means for me, that there is a puppet master (crucified body) and a puppet (normal altered body).

Interesting article and well written too. Better than most of the illiterate drivel you come across on the web these days... it's almost as if there had been proofing and editing done to make it enjoyably readable. :D On to business now... TL;DR version: the proof indicates strongly that it is either Moloch riding on the back of a meat puppet or that Moloch is carrying the body of the doctor. Because of the cut scene... I find it easier to believe it's a meat puppet carrying Moloch.

--- Long version with my observations/thoughts from in game events --- In the cut scene though, it shows that Moloch impales Rostropovich with a bar or spear (can't remember which offhand) while burning him. The body you find in the area at the end of the quest is impaled and burned as well which matches up with the scene... and the Outrider's comment to Zahedi is something that basically says that the Doctor is dead. Now, this could be a meta statement to confirm the doc is dead, or it could be the main character's assumption that the corpse is Rostropovich's... we'll never know which until more lore is uncovered... or the dev team admits to who the crucified body is... This doesn't rule out the possibility that Moloch is still developing power and has some sort of capability to capture or transplant souls though... Enoch's lore is still new and being developed. The problem with this is that, in theory, you could not have killed him in the expedition because there could have been a wounded soldier or one hiding that he could have taken over and continued to live. Unless again it's an issue of in-game vs meta knowledge being used and the Outrider is just assuming that they've killed Moloch in the expedition. I would be more tempted to believe the theory that the figure on the back is Moloch and has developed some sort of ability or link to the body that is carrying him around... since, once again... the lore is still new and the powers of the Altered aren't set it stone. Either way, it's fun to build theories and watch the game world develop...