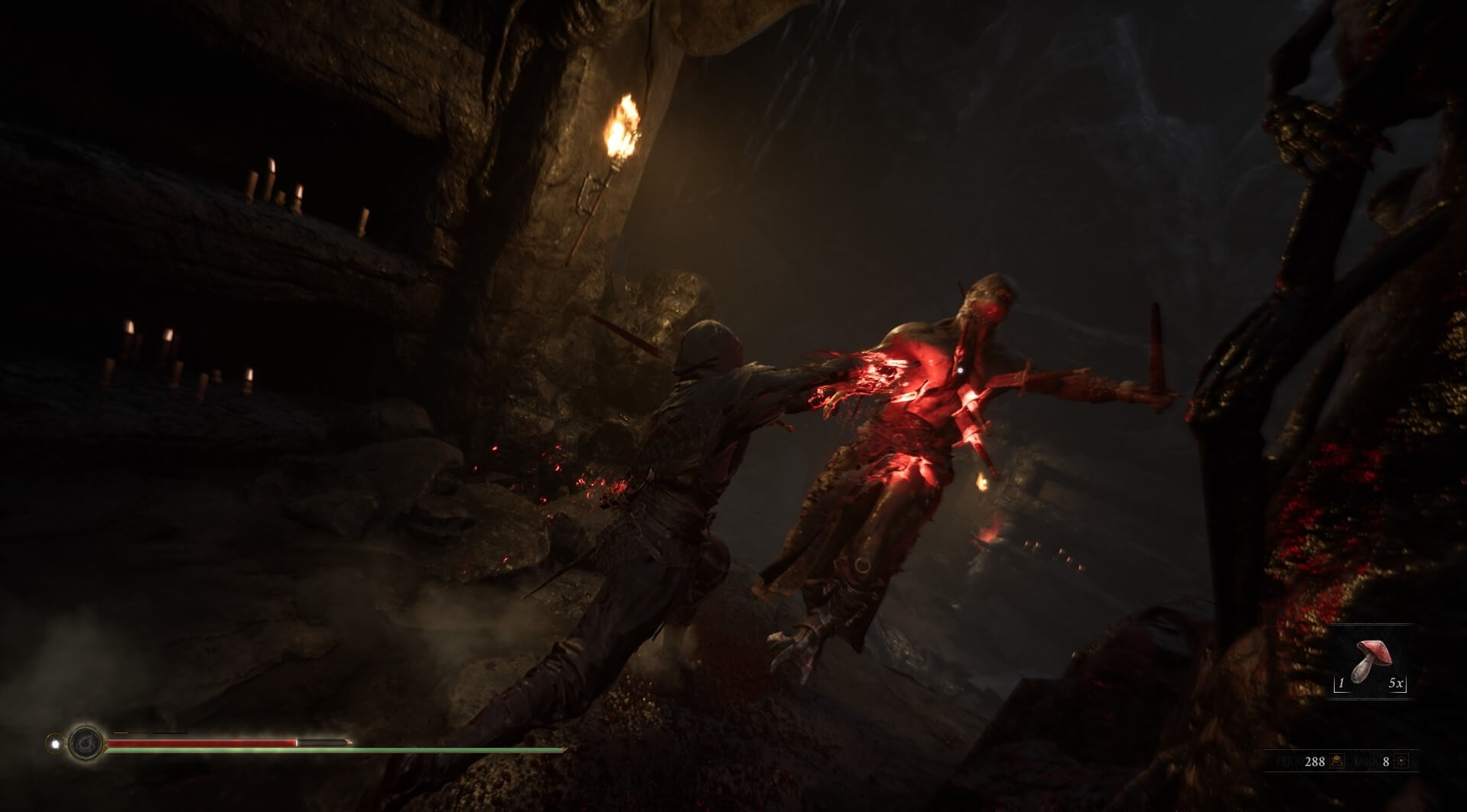 I was a little scared to learn how to parry in Mortal Shell when I first played the open beta. Even when I jumped into the full release, I still didn’t tempt my fate at the risk of taking damage. But once I realized how powerful a well-timed parry or Empowered Riposte can be, I almost did it nonstop. Here’s a more thorough guide on it than what I’ve spoken about in other Mortal Shell guides.

How to Parry in Mortal Shell 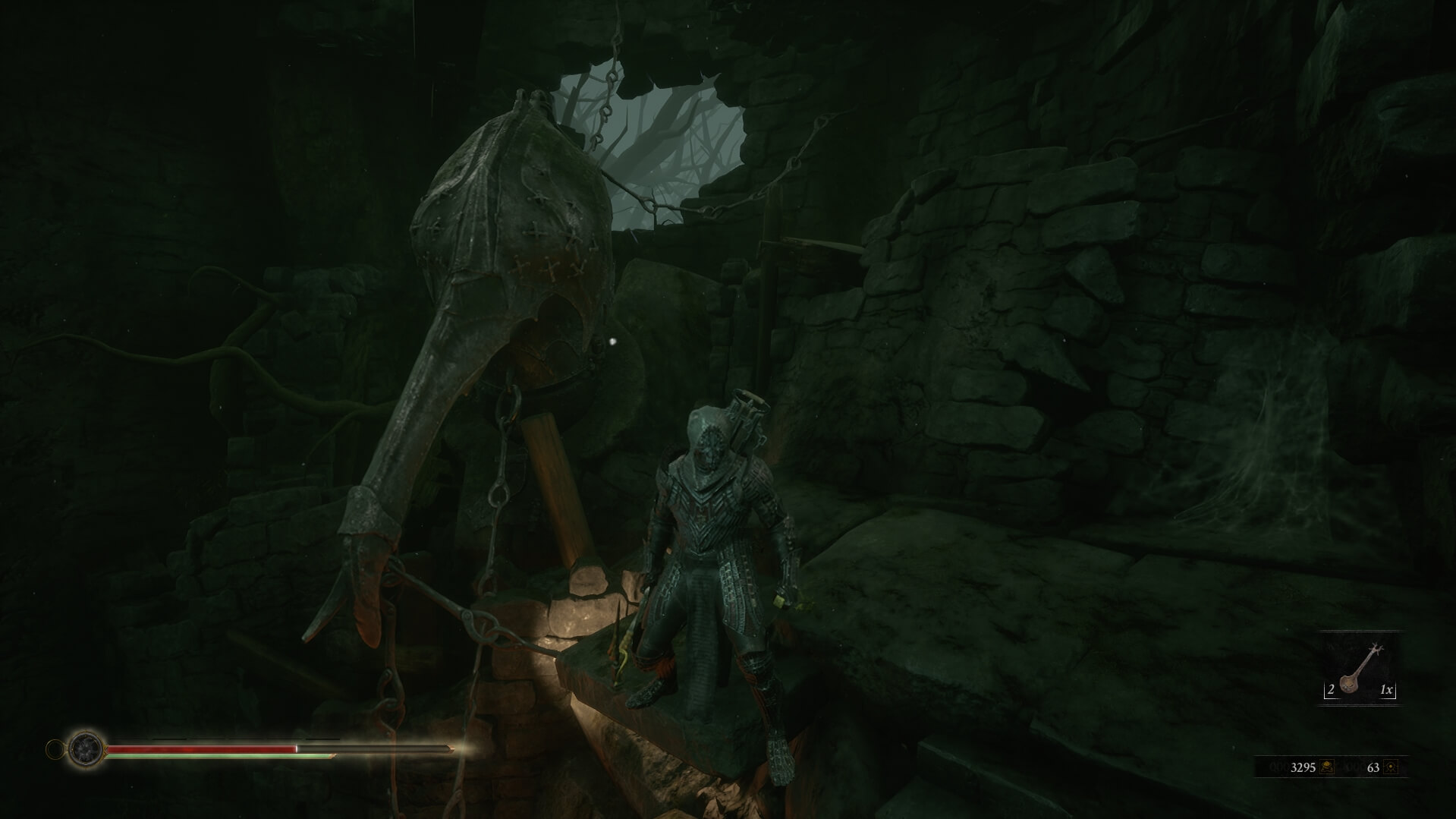 Before you can parry in Mortal Shell, you’ll need to progress in the story a little bit first. Once you’ve found the Fallgrim Tower (main base), you can remove the Tarnished Seal from The Old Prisoner NPC. This is how you unlock the ability to parry alongside the new Empowered Riposte skill.

Now learning how to actually parry relies completely on timing. You’ll need to tap the parry button about half a second before an enemy hits you. So long as the Tarnished Seal on your back hip doesn’t glow, you can parry an enemy. If your timing is right and you block an attack, you’ll see either a gray glowing circle or a red one. A red one means you have enough resolve (yellow bars above your health) to strike back. Gray means you don’t have enough.

It doesn’t cost anything to parry, but if you want to attack back, it costs one resolve. For example, using an Empowered Riposte to regain health. If you’re struggling to block, it’s important to mention that some enemies are more difficult than others. Certain enemies have more attacks they’ll do, others might have audio cues that make it easy to know when to parry, etc. Regardless, I recommend locking onto whoever you’re fighting so you’re already facing them.

Minor spoilers below regarding boss names. 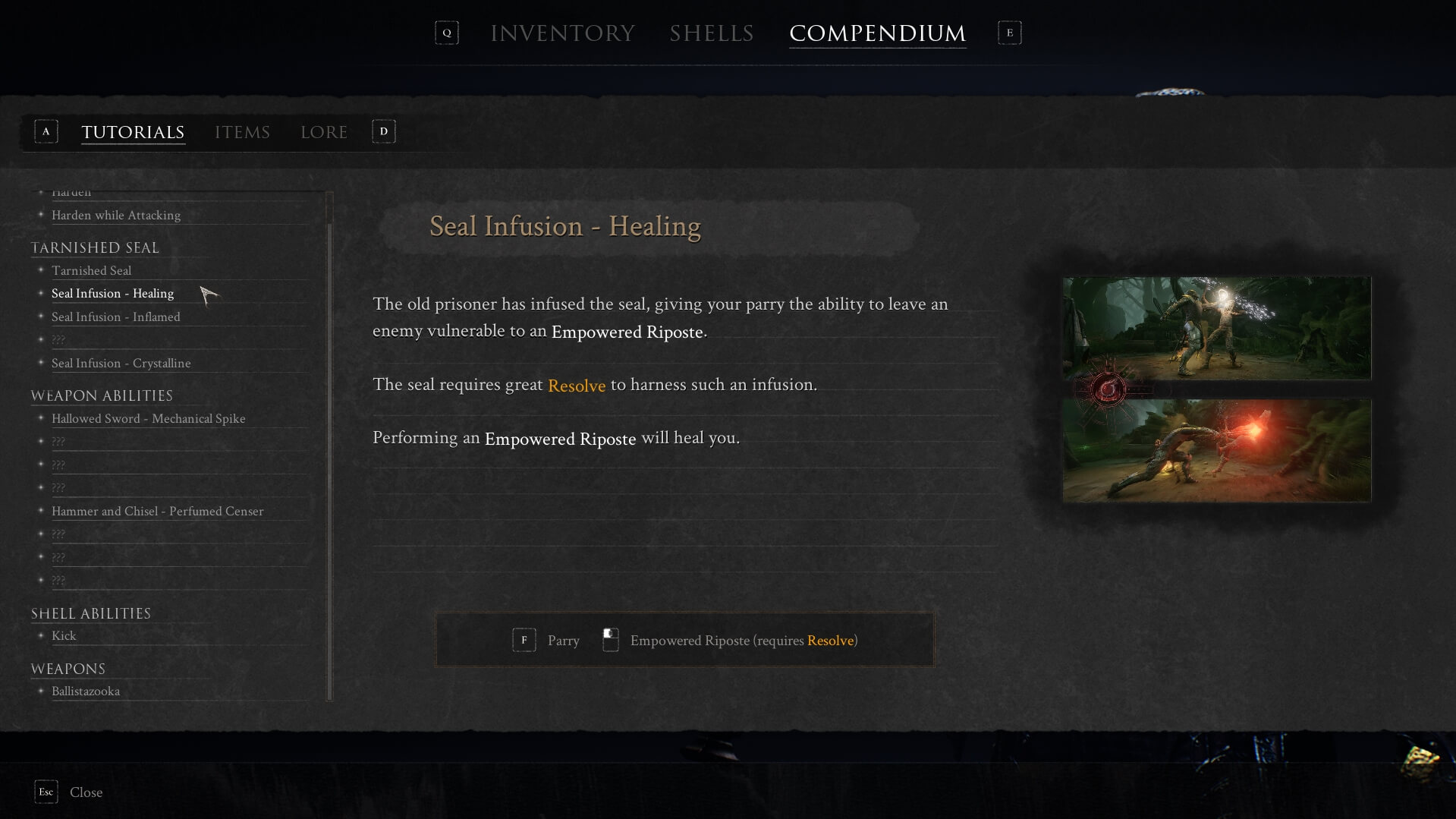 This is the first parry skill you get by removing the Tarnished Seal from The Old Prisoner. Players who took part in the open beta will recognize the Empowered Riposte. Once you successfully parry an enemy attack, you can strike back to regain a good chunk of health. This also deals decent damage and often staggers enemies. 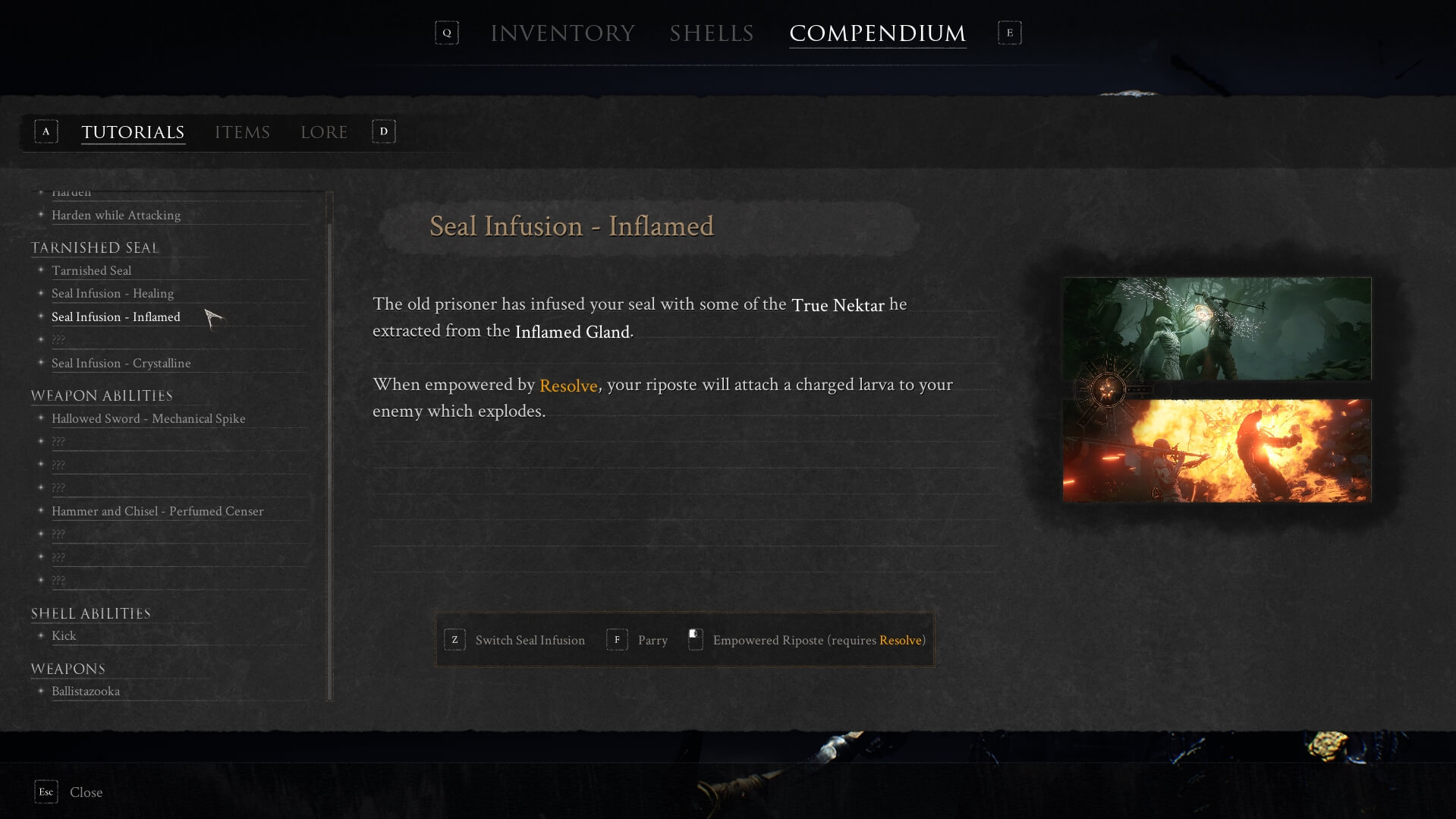 Once you’ve defeated Imrod, the Unrepentant, you’ll receive an Inflamed Gland. This can be exchanged with The Old Prisoner to get the Inflamed parry. If you’re confident in your skills and not taking much damage, this is a strong ability instead of the Empowered Riposte. Upon successfully blocking an attack, you can strike back with a “charged larva” that will explode after a short moment. While this can hit multiple enemies, you’re more likely to deal a good chunk of damage to one. 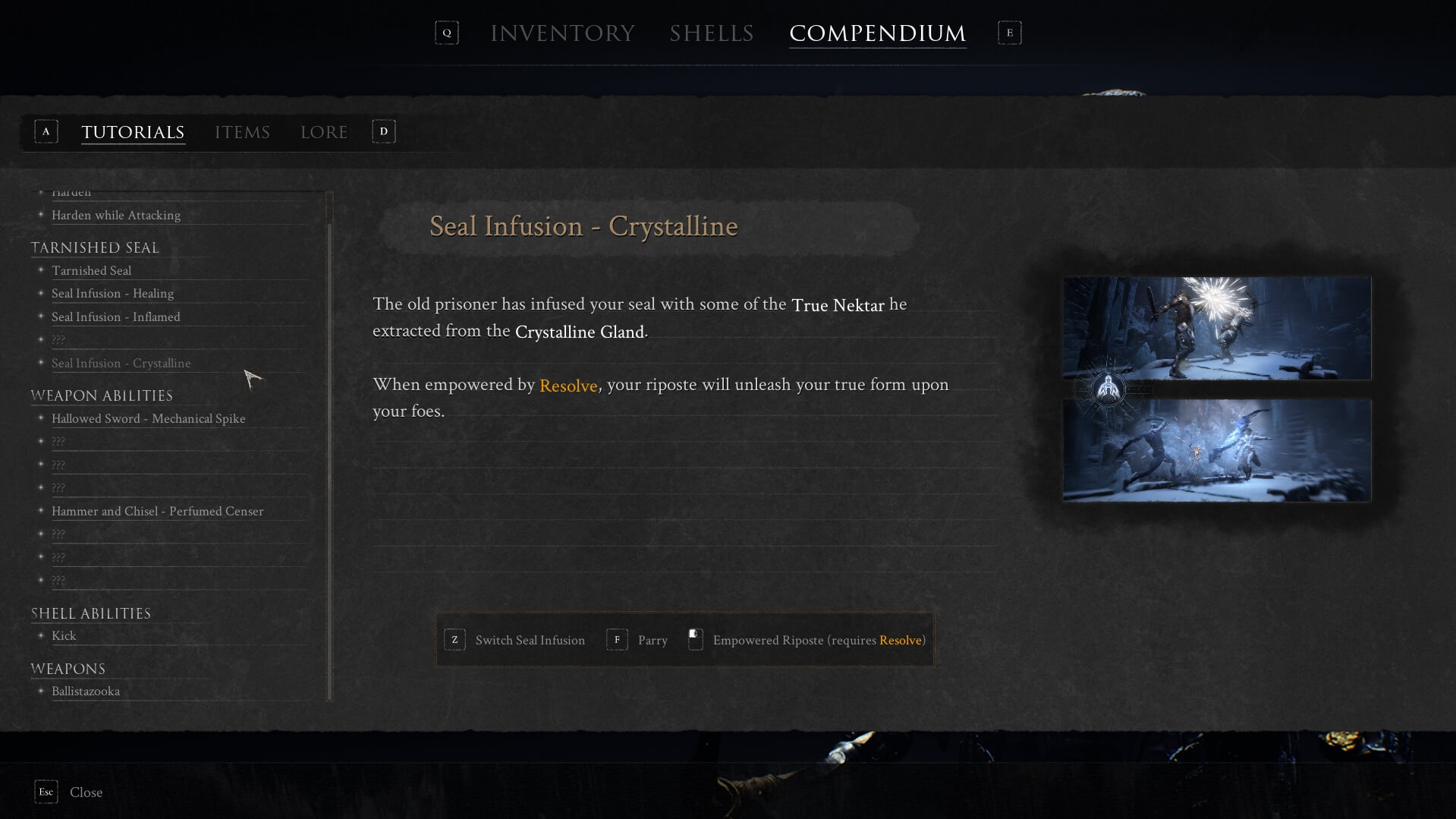 Defeating Tarsus, The First Martyr, will reward you with a Crystalline Gland. I never felt the need to use this parry much, but I’m sure it comes down to personal preference more than anything. For this attack, your character leaves their shell with a few attacks and charges through the enemy. 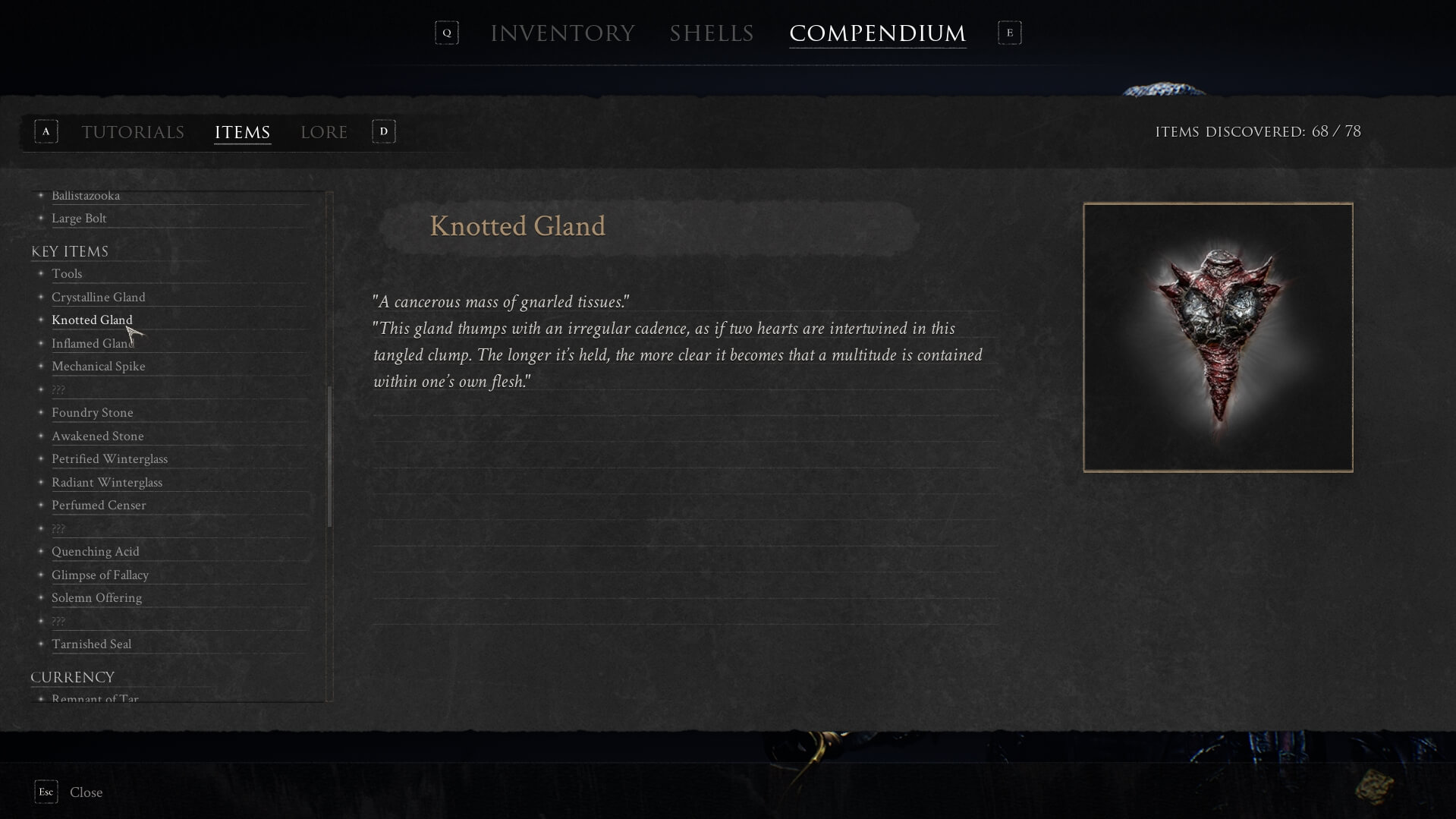 Defeating Crucix, the Twiceborn, rewards you with a Knotted Gland. I can’t give much advice on this one since I apparently don’t have the ability for this one. However, it supposedly pushes your enemy into the air and freezes everything nearby. This gives you an opportunity to attack while they’re frozen. 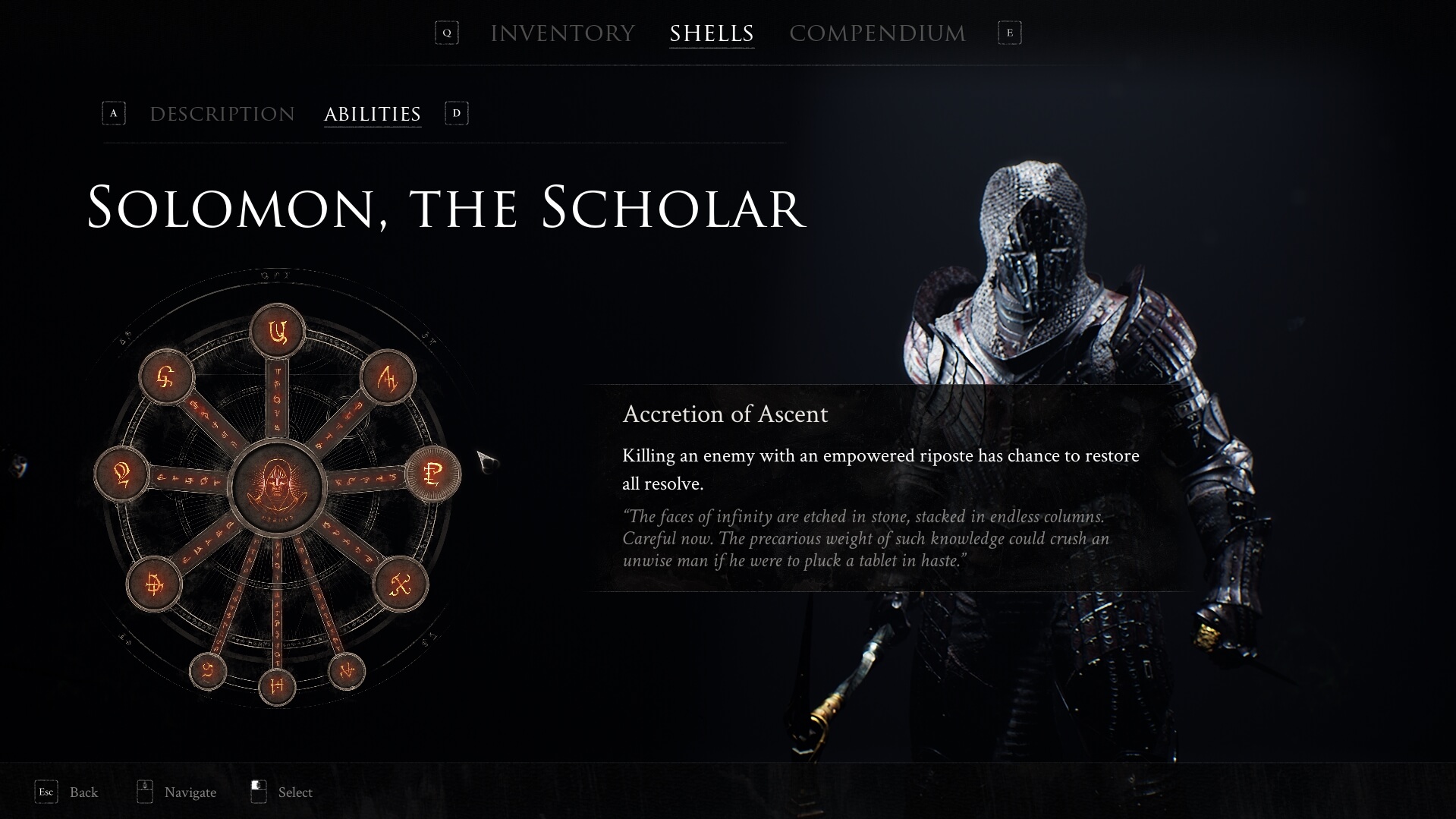 Hopefully you’re an expert at parrying now and can easily destroy your Mortal Shell foes. If you’d like a video showing how to parry, feel free to let me know in the comments and I’ll upload one! Otherwise, be sure to check out our other Mortal Shell guides on tips and tricks for advanced players or ones for beginners.