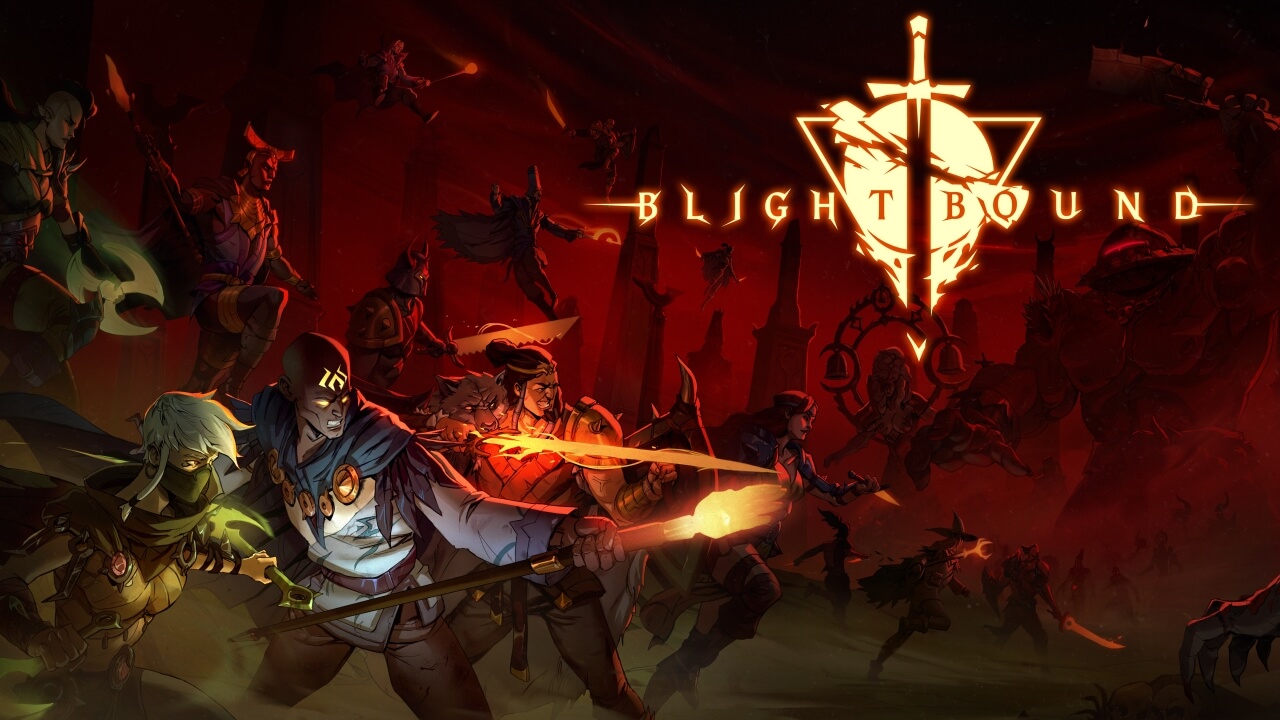 Learn some of the best tips and tricks for Blightbound whether or not you’re starting it for the first time. If you haven’t heard of it yet, it’s a dungeon crawler built around three players working together to fight back a plague known as the Blight. And if it turns out you have some questions, feel free to ask in the comments below the article.

Tip 1 – Work Together With Your Team 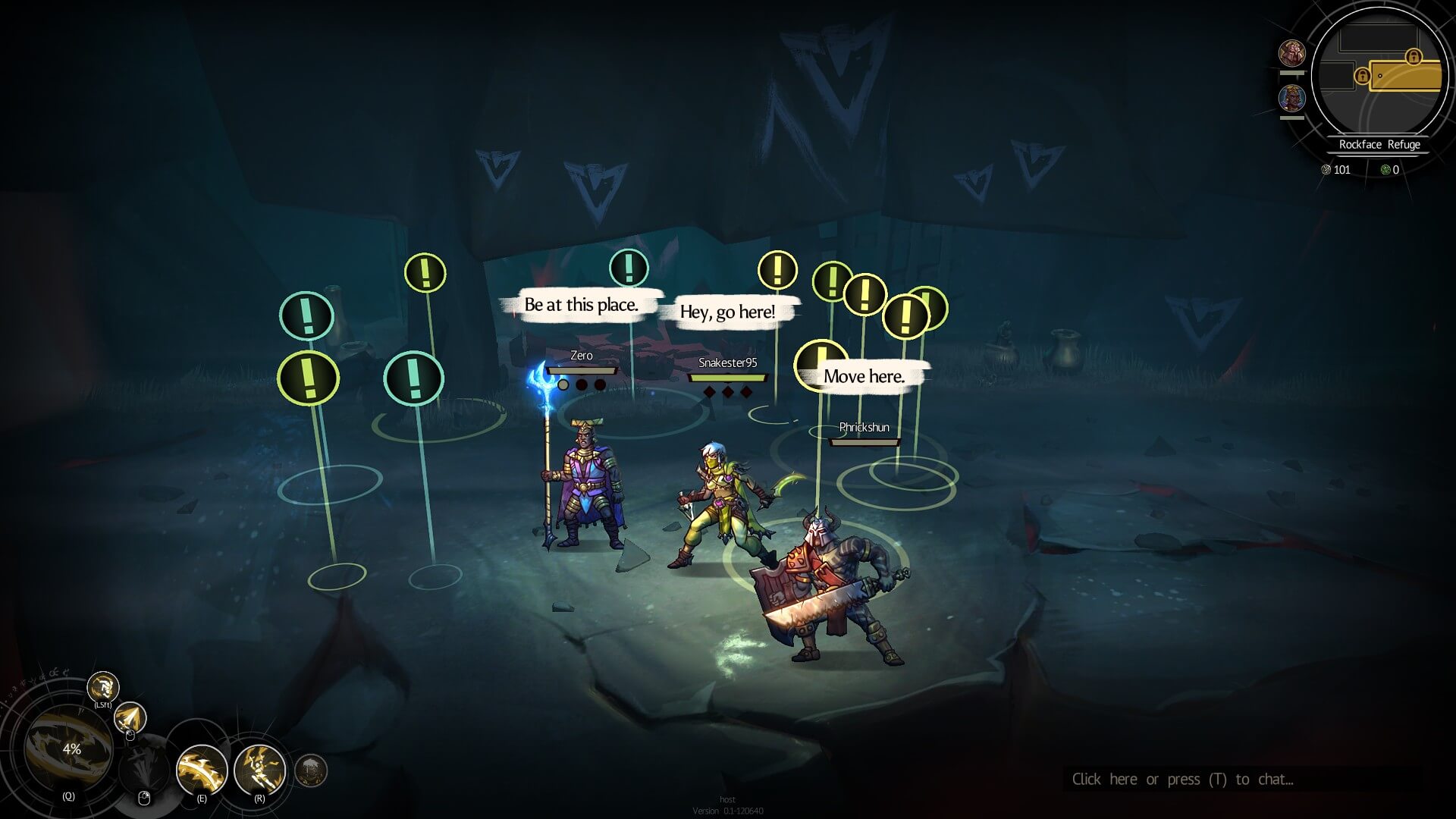 Be sure to work together with your team even if that includes a ton of silly pinging.

It doesn’t matter if you’re queuing up alone or playing with friends, always work together. Every character has a role that helps build out your team preparing them for success as mentioned tip 3. Some great examples of how to work together and communicate are in the bullet points below:

Tip 2 – How to Choose Hero/Character

If you want to pick your own character for each dungeon, you’ll need your Refuge to be level 9 first.

If you’re wondering how to choose your hero/class/character in Blightbound, it’s not too difficult, but it does require your Refuge being level 9. Once you reach Refuge level 9, you can choose which character you play by clicking their picture on the left side and then hitting ready or play at the top right corner. So long as you have their character page open as shown in the screenshot above, clicking to play will select them going in.

Fair warning, you will miss out on some bonus rewards and an extra 2 stat points added to your stats temporarily for the dungeon. This is a way to promote randoming so matchmaking queues aren’t as long. If you want to random but have preferred characters, you’ll need to blightbound one from each role.

Click the character on the left side of the screen that you want to set as preferred and then press the “Set Blightbound” button at the bottom right corner. Once they’re set as Blightbound, their avatar will have a yellow background. 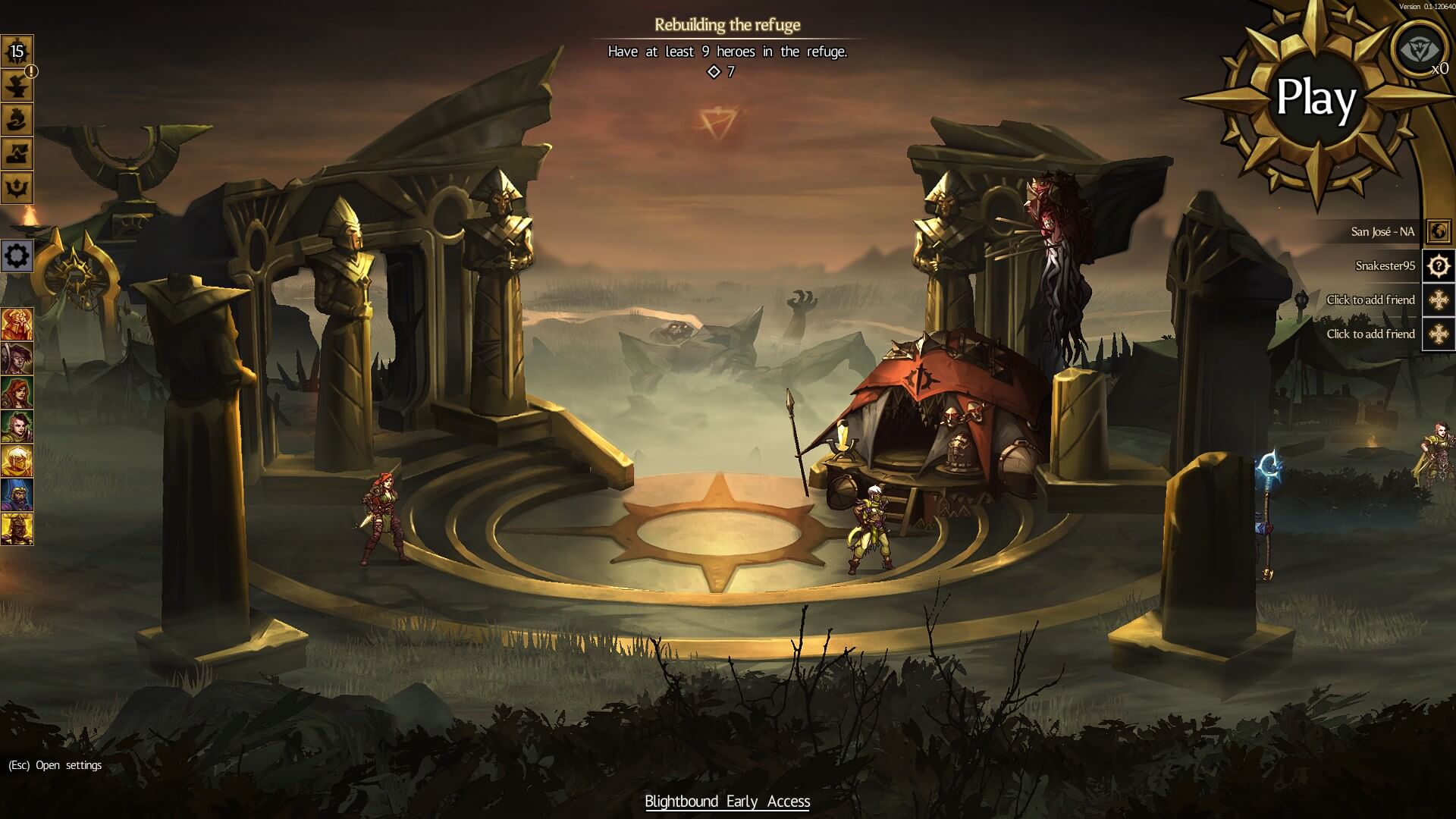 Every hero has their own way of playing and those all fall into certain roles.

The three unique roles in Blightbound guide each character toward a certain playstyle. However, depending on what stats you choose and items, you can build a character to how you want to play. Regardless, below are brief descriptions of each role and their starting character.

Assassin – Scarlet is the first Assassin you start with and she’s built as a DPS (Damage Per Second) character for killing enemies quickly. Remember to hit enemies from behind for a Backstab damage bonus.

Warrior – Malborys is the first Warrior and they’re built to be a Tank character for grabbing enemy attention.

Mage – Korrus is the first Mage and their most vital role is being a healer for the rest of the party. However, they also have strong attacks and a great shield that makes allies invincible. 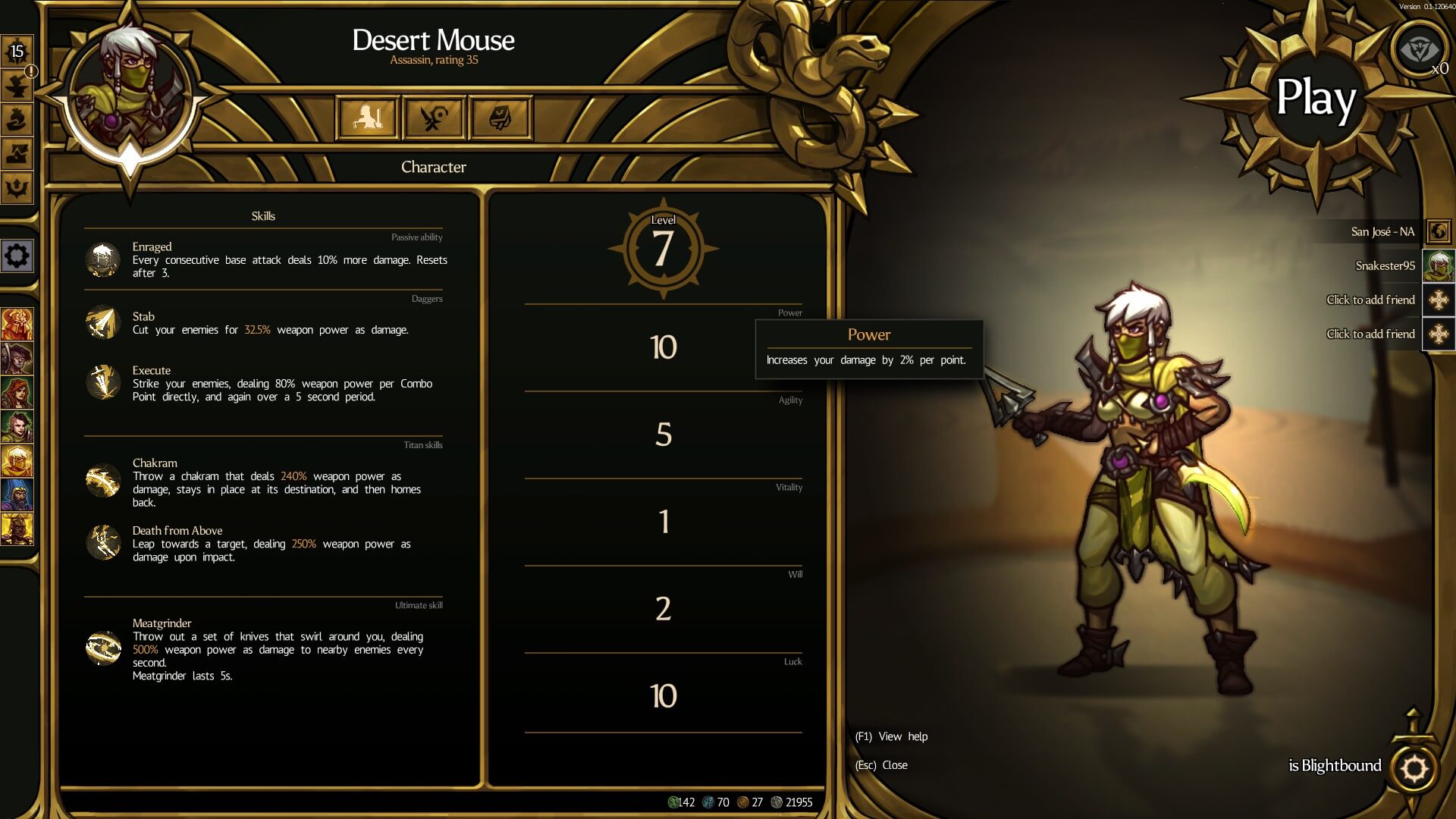 While every stat benefits each character, you’re limited to a certain amount with the max level being 8.

If you’re struggling to decide what stats to pick for your character, check out the table below to see how you benefit from each one. Also, the table provides an idea of which stats are best for which role. However, you should still build the way you want to play, because every character benefits from each stat. Once you reach level 8, you can no longer get extra stats from leveling. But you can get a few extra stat points from leveling your Refuge.

Tip 5 – What is Notoriety in Blightbound? 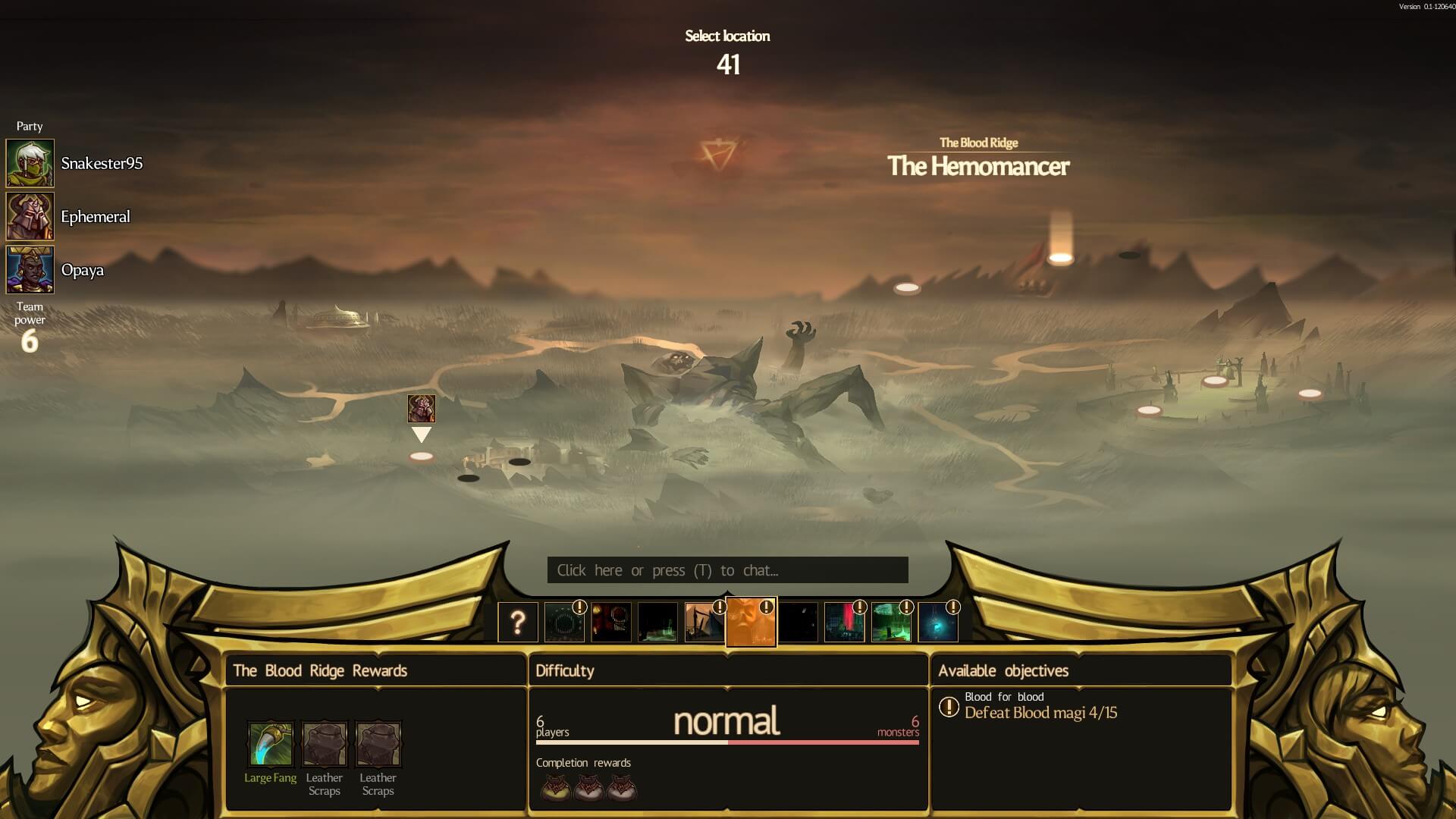 Raise your party notoriety to unlock even better rewards from missions.

Parties gain Notoriety as they succeed in completing dungeons. So long as your party stays together, you’ll gain more Notoriety and have access to additional difficulties with more rewards. If a player leaves your party or you lose a dungeon, you’ll lose Notoriety. And if you’re worried about the difficulty becoming too hard, not every choice on the map will always be more difficult. 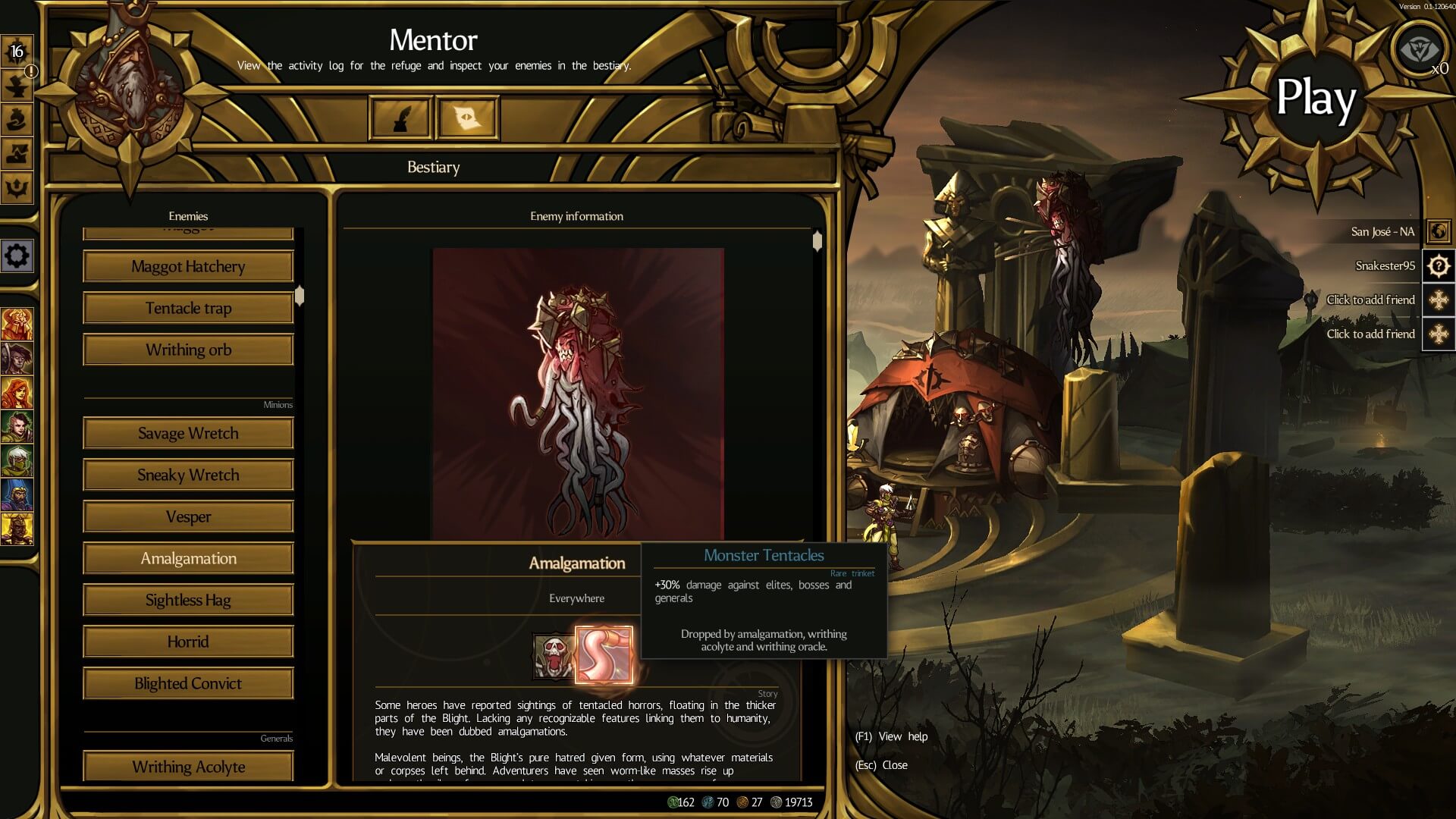 Use the Mentor’s Bestiary to learn little bits of lore and what items drop.

Once you reach Refuge level 2, you’ll unlock the Mentor which also unlocks the Bestiary. It’s easy to ignore this book and not think anything of it. However, it shows where enemies are and what items they drop so long as you’ve fought them before. This is a great way to find what you’re looking for if you’re trying to craft something or get a new item in particular.

Tip 7 – How to Solve Puzzles 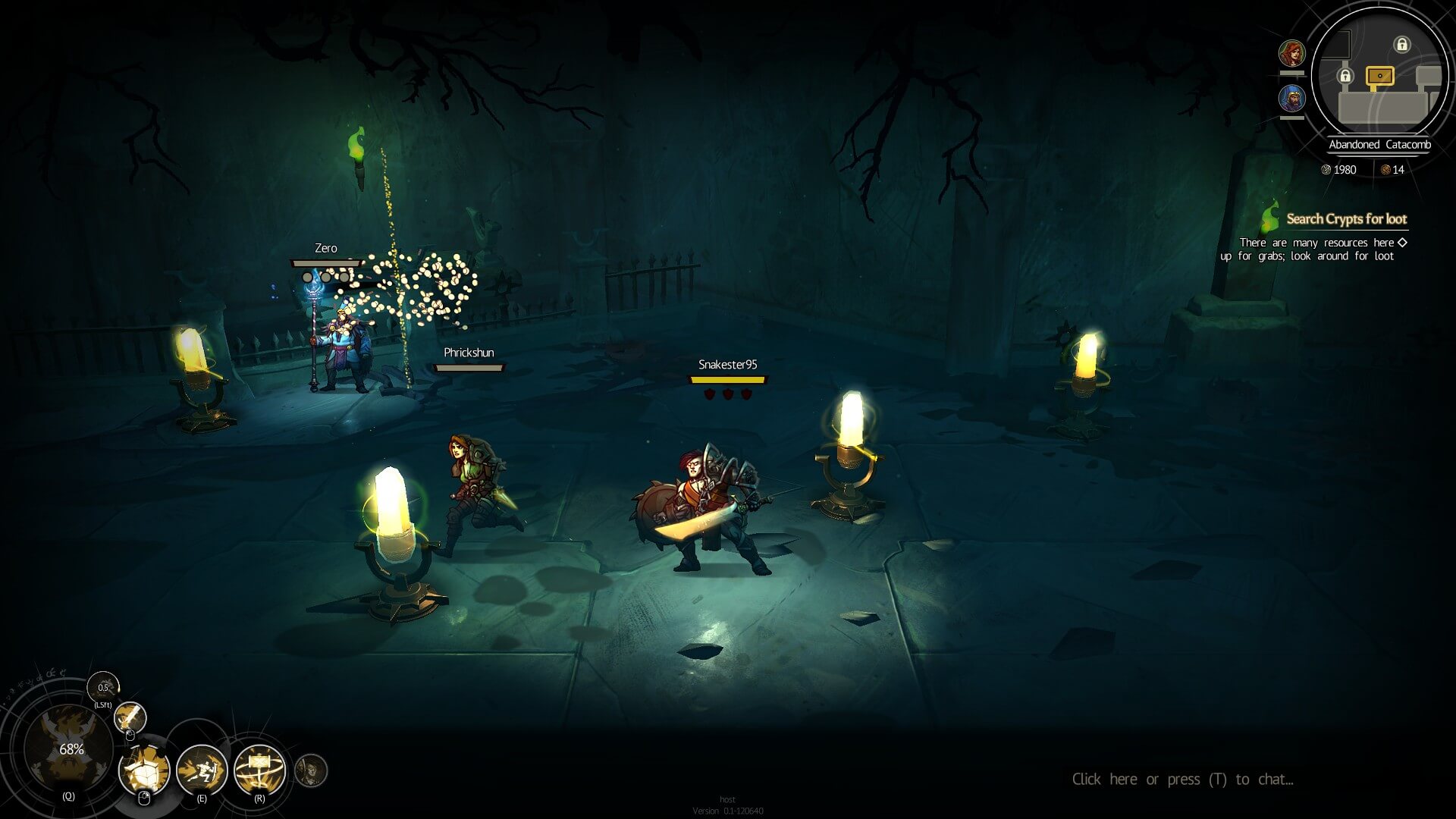 Puzzles are a nice touch in Blightbound even if they are a little simple.

Blightbound dungeons often have simple puzzles that block your party from advancing forward. This might be as simple as stepping on three floor plates or shooting glowing crystals to open a gate. If you’re stuck at a part, try looking nearby for clues or simply hitting every crystal at once. The puzzles won’t require you to go running around the dungeon for clues. So before you go crazy, take a moment, and see if anything nearby helps. If you’re still having trouble, drop a comment below and I’ll help you out.

Tip 8 – Stay Away From Red Auras 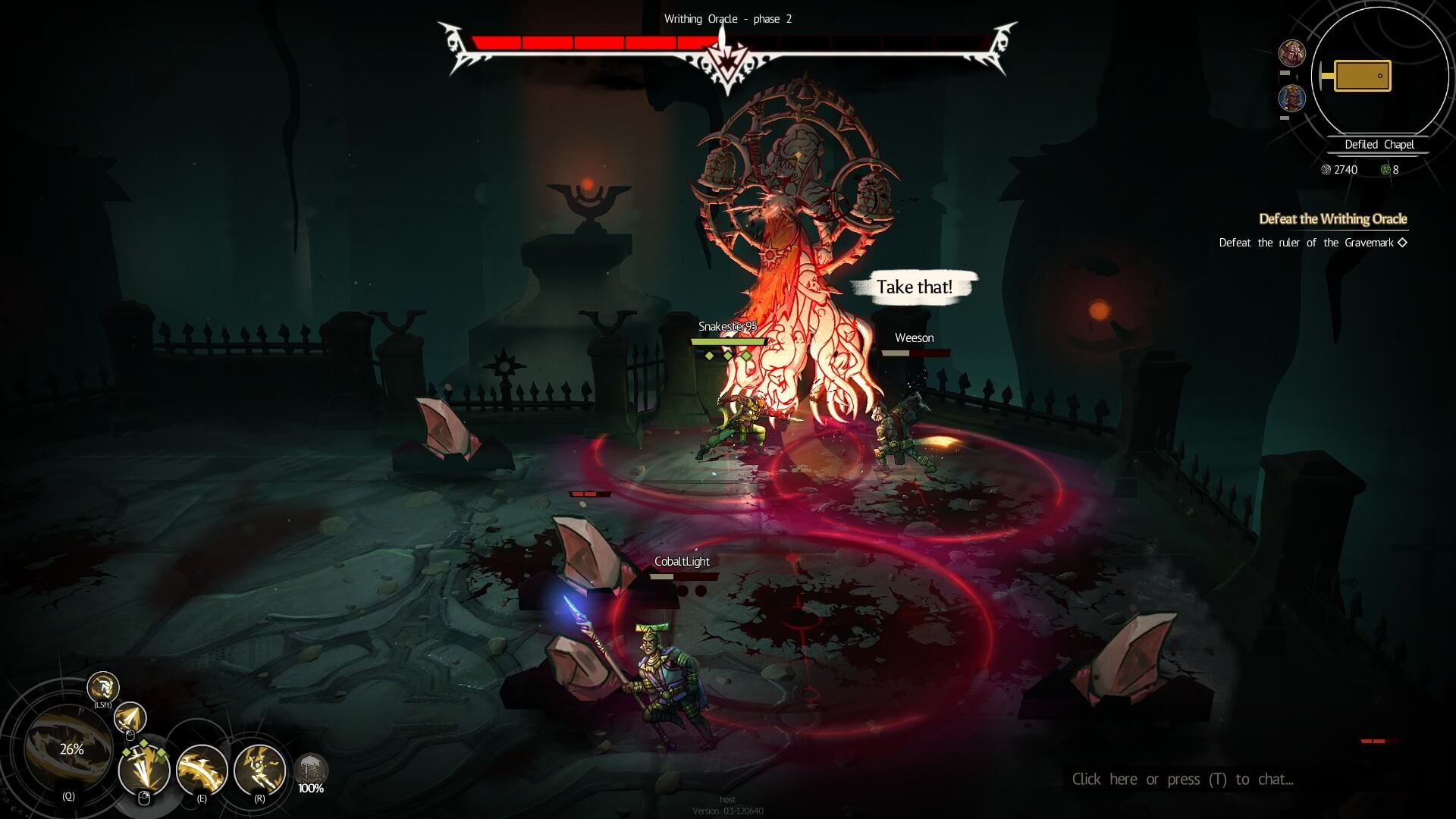 You should always stay away from red auras also known as AoEs.

If you’ve played an MMORPG or RPG before, you probably have a good idea of what red auras/circles on the floor are. They’re known as AoEs or Area of Effect abilities. AoEs in Blightbound are often solid or hollow red rings that warn you of incoming damage. The screenshot above shows a few as an example. If you see these, do your best to get out of them. As the next tip states, you’ll want to take full advantage of your dodge whenever you can! 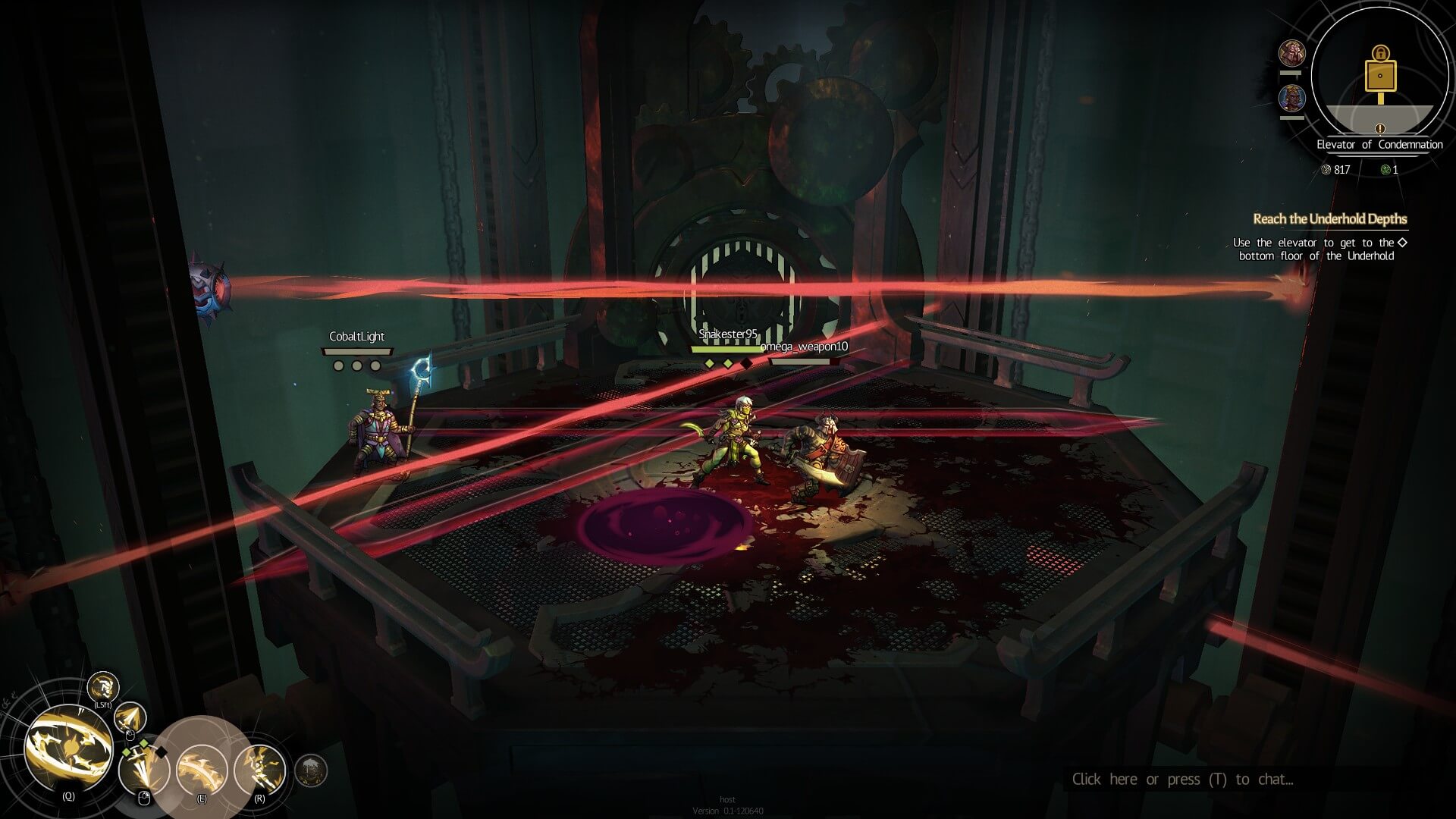 If you can’t stay out of the way, try to dodge away.

If you want to survive Blightbound, you can learn a lot from the movie Dodgeball. Every character has a dodge on left shift by default. While Mages have the best one because they can teleport through hazards instantly. Dodging is useful for getting away from enemies, AoEs, and repositioning too. If you’re playing an Assassin character, you’ll want to dodge sometimes to get behind an enemy for the backstab bonus damage.

Dodging also makes you invincible for a very short moment which can be enough to survive hazards like lasers in the above screenshot. 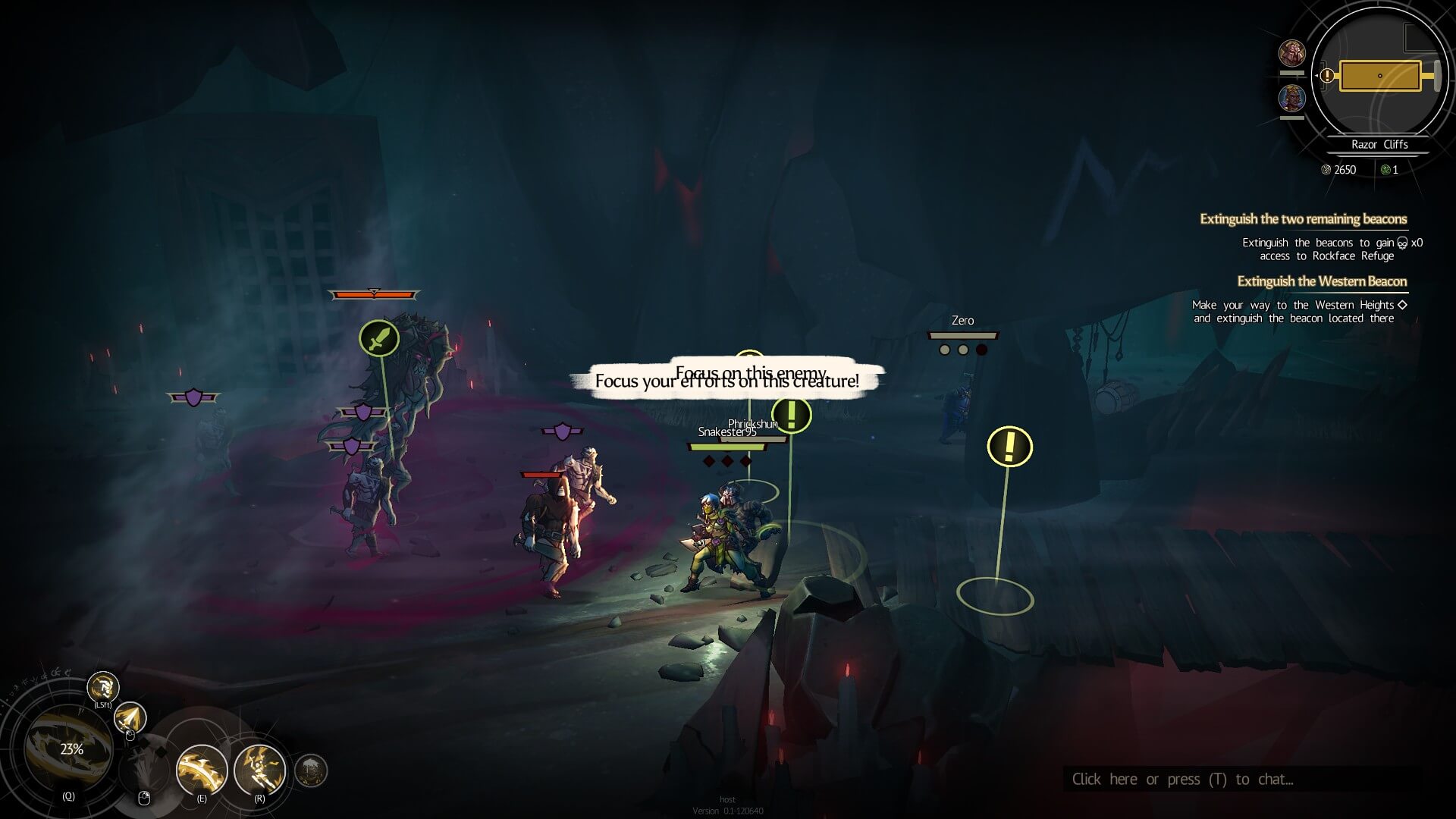 The enemies to the left in this screenshot have purple health bars indicating that they’re invincible.

There’s only one type of enemy I’ve come across so far that can make enemies near it invincible. While it remains vulnerable, any enemies inside its red aura will have a purple health bar to indicate they’re invincible. Don’t waste your time whacking away at them unless you pull them outside of that aura. I recommend not splitting them and simply going for the elite monster instead that is making them invincible.

Another invincible enemy worth mentioning is a giant red skull that floats around. It’ll chase any player near them and only die after a certain amount of time. However, it also deals damage to enemies if you can lead the skull over them too.

I hope these Blightbound tips and tricks help you get started with a little bit of an advantage. If you need help or have any questions, feel free to ask in the comments below.

Blightbound was provided by the PR company via a Steam code.

how to get more maximum combo point? i just have 3 combo point but bot have 5 combo point, same character, why?

Hey Alisha, it's been a while since I last played but I can guess. Going off memory, you are right trying to hit every crystal. You just have to do it quick enough that they don't reset.

I remember the Mage working well here since they can hit multiple at once. But otherwise, working together with a teammate should be okay.

I'm sorry to hear that person was being so rude. Hopefully you're able to get past the puzzle with a better teammate. Let me know if you're still stuck and I'll research more into it.