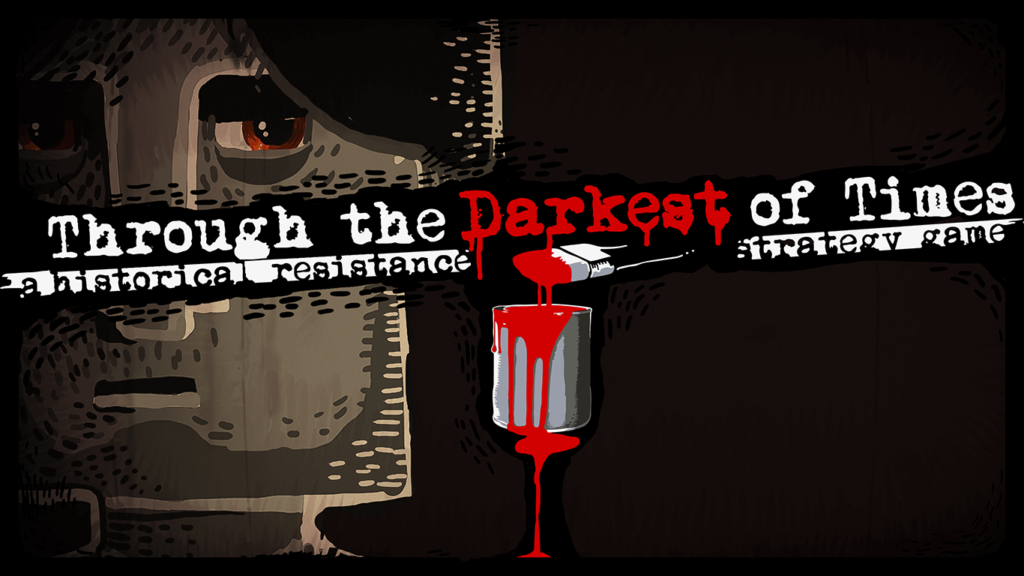 I was lucky growing up that I went through my education without racism being an issue. My peers weren’t bullying each other over race or religion, and something like the Holocaust always seemed so far away. With the amount of hatred that already exists, I think we realized there’s no reason to add to it with prejudicial thoughts that don’t deserve a place here. It’s absurd that less than a month ago, there was an anti-Semitic attack in the state I live in. Through the Darkest of Times shows a perspective of the Holocaust that reminds us, we can’t ever let that happen again.

What is Through the Darkest of Times? 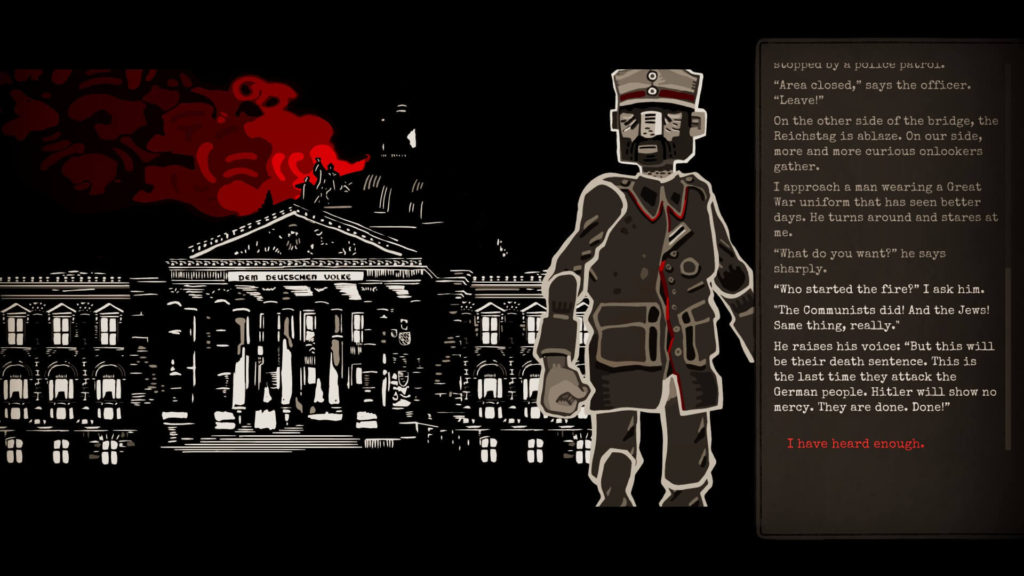 Through the Darkest of Times shows how people were manipulated into believing lies.

German developer Paintbucket Games created a narrative experience from the perspective of the resistance during Nazi Germany. The mechanics revolve around rallying support for your movement against Hitler’s uprising. However, instead of simply showing Nazis as the bad guy, the story gets a lot deeper.

Through the Darkest of Times cycles through time week by week alongside your resistance completing missions. The developer spreads interactive stories in-between missions that narrow in on major Holocaust events. There’s nothing more frustrating than watching the Reichstag fire and people blaming others without reason. Through the Darkest of Times continues to tell a frustrating and disappointing story because you know there isn’t a happy ending.

Fighting Oppression One Mission at a Time 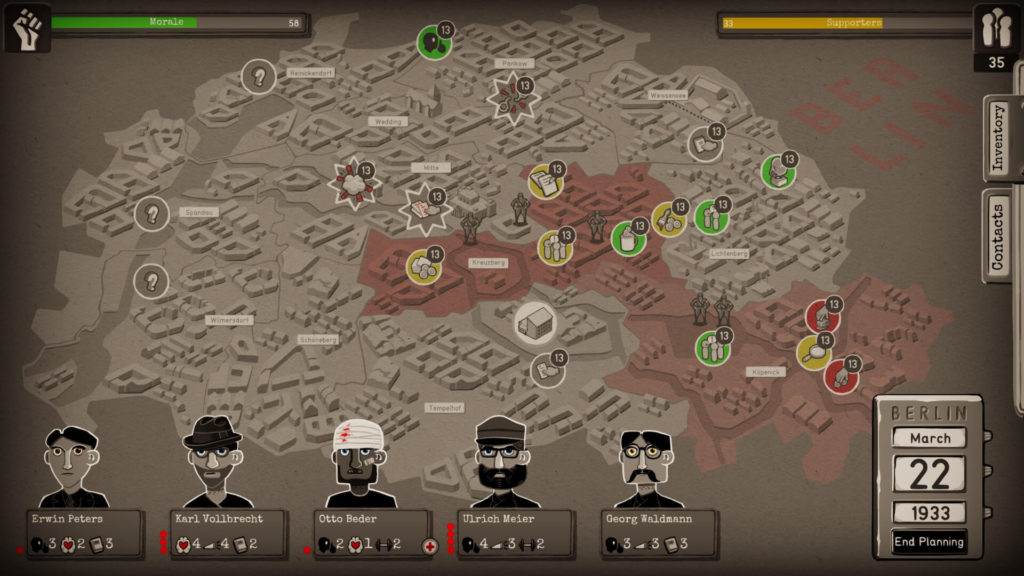 Plan your missions on the map screen by deciding what’s most important.

The beginning of Through the Darkest of Times focuses on missions like collecting donations and gathering support by talking to workers. Eventually, it evolves into disbanding Hitler Youth groups and hiding fugitives from the secret police (Gestapo). It’s important to gather enough supporters that your group prevails between each chapter. However, you also have to balance their morale so they don’t disband.

Despite never having an issue with morale, there are many events that frequently wane on it. An arrested resistance member is always a significant hit on morale. This plays into the strategy by having to decide what missions are most important. It’s a constant gamble between decisions like buying medicine for an injured member or rallying supporters.

On top of it all, you have to watch each member’s heat level so the Gestapo doesn’t arrest them. This throws in a curveball by forcing missions that vary from laying low to vandalizing records.

What really makes Through the Darkest of Times a strategy game plays further on choosing missions. Every resistance member has a rating for how well they perform certain tasks. Also, they have two traits and a job position that affects their performance too. This always makes it a challenge in deciding whose best for the job.

Through the Darkest of Times Tells an Important Story 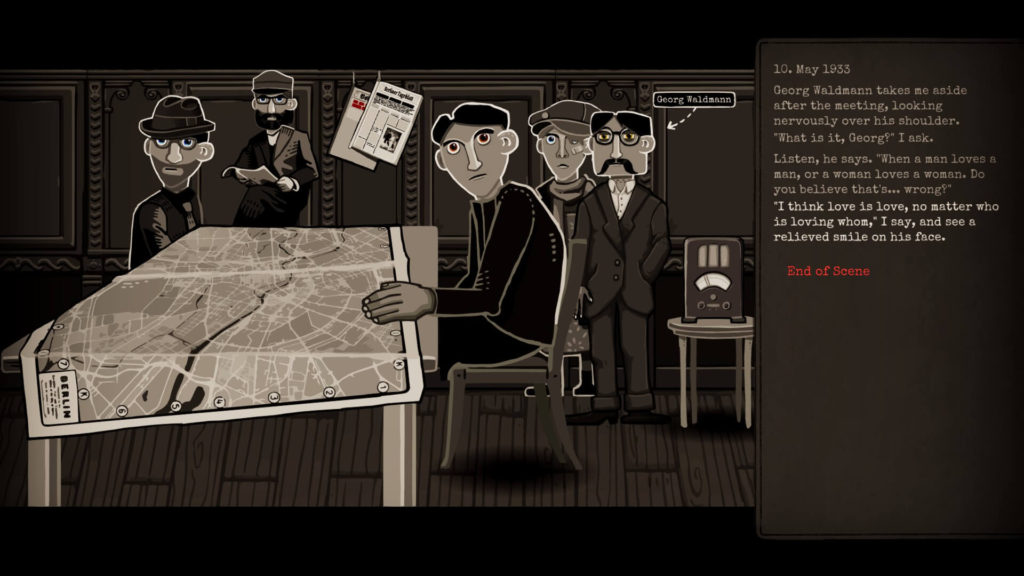 During a time of mass discrimination, one character wonders if it’s okay for a man to love another man.

I’m glad I played Through the Darkest of Times because it intrigued me to learn more about our history. Anytime I saw a name mentioned in one of three newspapers published weekly, I wanted to research it further. The developer mixes various stories both real and fake to help people understand what it living in Germany was like.

I remember ducking into a metro station during an air raid and seeing a young man hiding his jacket. It was freezing cold and he was too scared to wear it because it had a Yellow Star. I gave him my jacket instead so he could stay warm without worrying about anti-Semitism. It’s insane thinking about that period of history and living through it. There are times where it hurts to play because you wish it wasn’t a real story.

Most Gameplay Issues Are Easy to Look Past 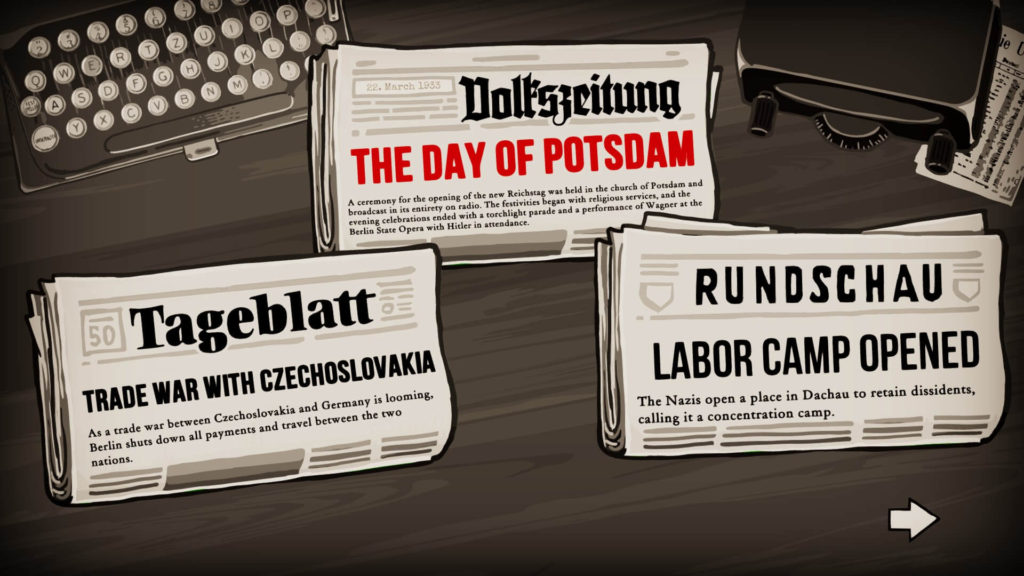 Typos become a little more common further into the chapters, despite them not impacting my experience. However, there were two bugs that began to ruin the end of my playthrough. I ran into an issue where my characters would gain a skill point from leveling up and instead level up infinitely. Knowing better, I didn’t abuse it when three of my five members were bugged.

The second bug was difficult to avoid and unfortunately prevented me from experiencing certain missions. I had at least five missions where I couldn’t proceed past the rewards screen. Through the Darkest of Times slowly turned into memorizing which missions would crash my game. 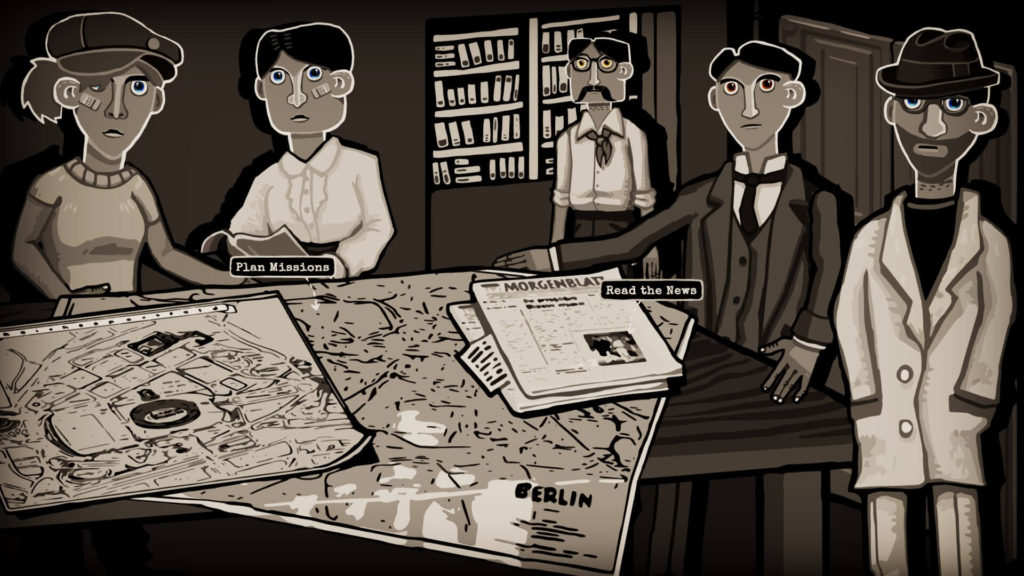 The headquarters always has your band of resistance members awaiting your move.

Through the Darkest of Times retells a horrifying story with a powerful narrative while keeping it interesting. You may not get a whole history lesson from this game, but it shows how oppressed a massive community was. Developer Paintbucket Games balances the story and gameplay well without either side feeling weak. Overall, Through the Darkest of Times is a great narrative and reminder of a terrible time.

Through the Darkest of Times releases on PC via Steam on January 20, 2020.

Through the Darkest of Times was provided by the developer via a Steam code.