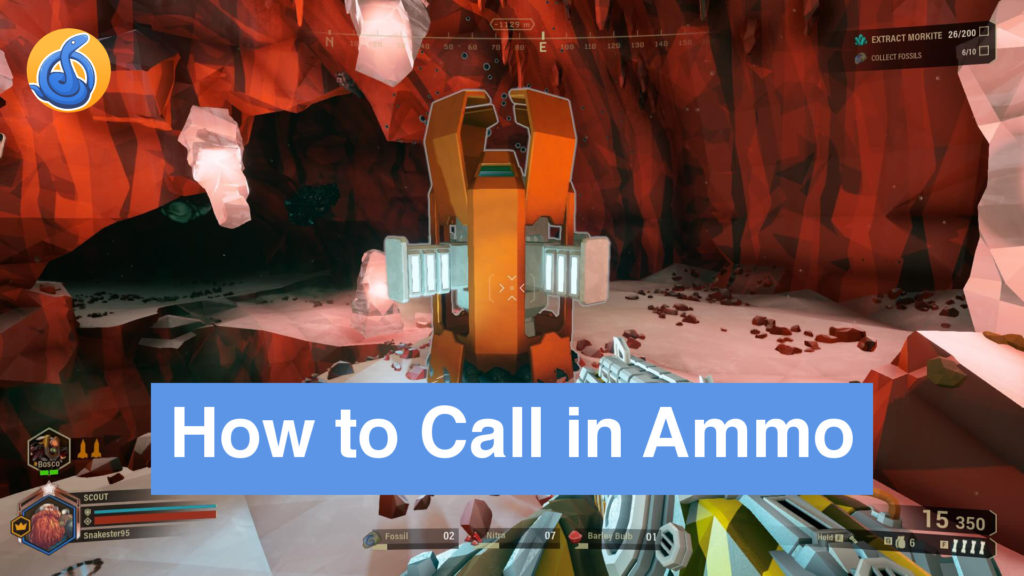 One of the most important things to know while fighting alien bugs in Deep Rock Galactic is how to call in ammo. If you don’t know, don’t worry, we’re here to explain the simple and easy way to do so. Before explaining how to call a Resupply Pod, it’s good to know that you gain 50% ammo and 50% health from each ammo resupply. 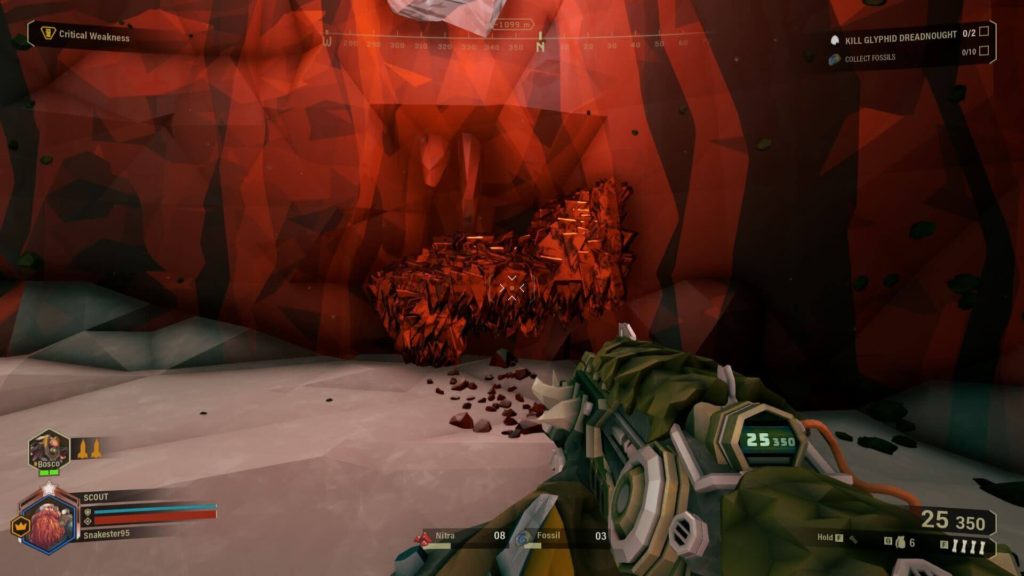 Nitra’s primary purpose is to call in ammo.

Before you call a Resupply Pod for ammo, you need to mine Nitra. This is a red crystalline mineral available in every level regardless of the environment type. You’ll need to acquire 80 Nitra and deposit it into Molly the M.U.L.E. (Mining Utility Lift Engine). An example of what Nitra looks like is shown above, but if you’re still not sure, the scanner can identify every mineral and organism. On PC, the default key for this is holding CTRL.

If you’re having trouble finding Nitra, you can also kill Loot Bugs and the rare Huuli Hoarder for it. Also, Golden Loot Bugs only drop Gold if you’re wondering why it doesn’t drop Nitra like the normal version. One other way to gain Nitra is from opening Cargo Crates even if it’s only a small amount.

How to Call in Ammo 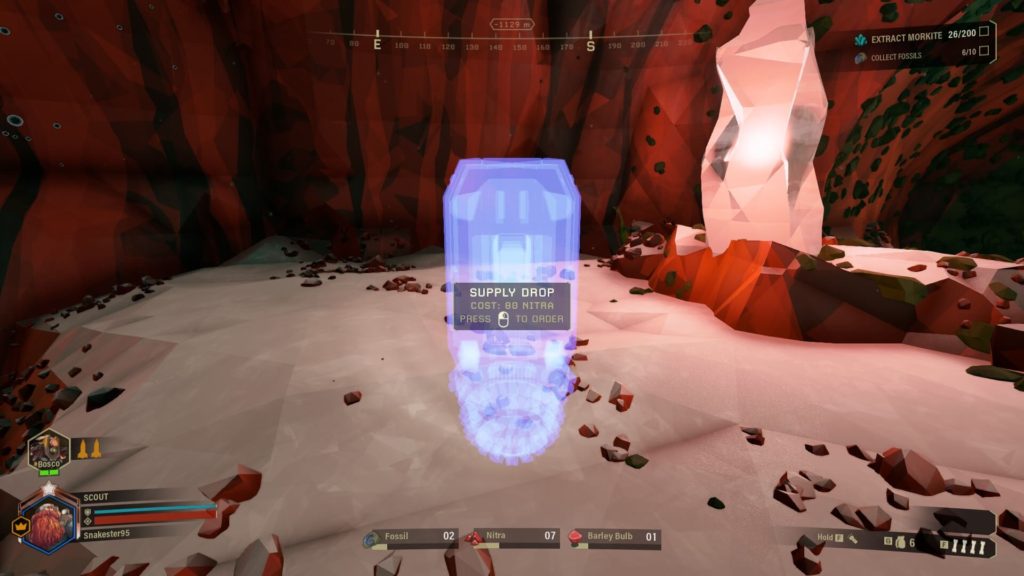 Make sure you place the ammo drop on a flat surface easy for your team to reach.

If your team already has 80 Nitra deposited into Molly, now is the time to call in that Resupply Pod. By default on PC, pressing the number 5 will show a transparent Supply Drop for placement. As long as you don’t try to place it in the air or on too steep of an incline, it will show as blue in the above picture. Another reason it might not show as blue is if your team hasn’t gathered enough Nitra. 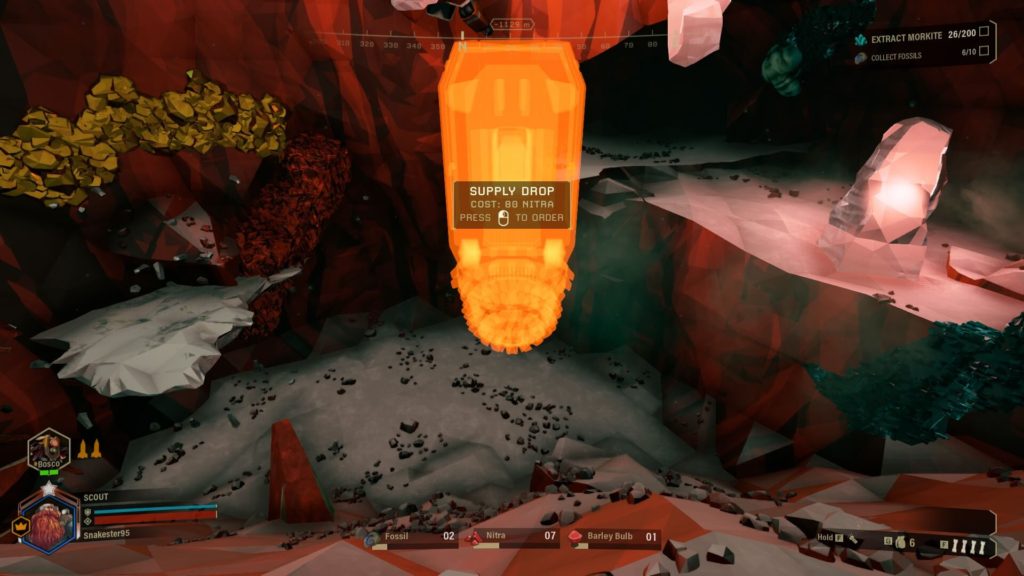 Don’t try to place the supply drop in mid-air or else it won’t work.

Once you call in a Supply Drop, the 80 Nitra is taken from Molly. Moments later, the Supply Drop will drill through the cave from above and land where you placed it. Every Resupply Pod has four spots to grab 50% ammo and 50% health each. The amount of players in a game doesn’t matter in relation to how many resupply spots are there.

Seeing How Much Nitra Your Team Has 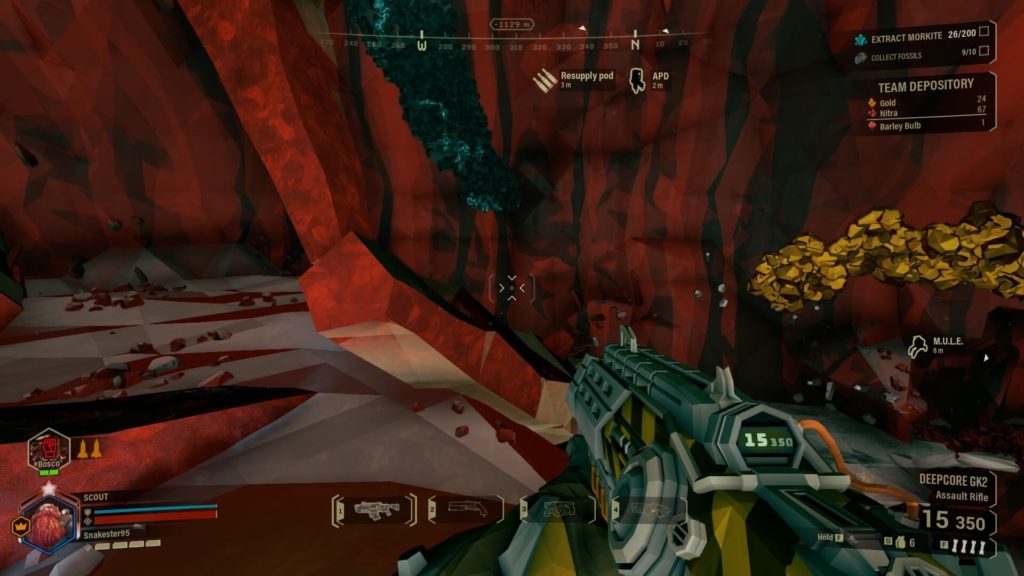 After activating the scanner, the top right corner shows how many minerals your team has deposited.

If you’re not sure how much Nitra your team has, hold CTRL on PC and it will appear at the top right corner of your screen. As previously mentioned, CTRL is the default key for activating the scanner and is the same in this case. Whatever the alternative key is for Xbox One, use that for activating the scanner and your team’s resources will appear. This only shows what has been deposited into Molly.

Another feature of pulling out your scanner is seeing how much ammo your team has. At the bottom left corner where each player’s portrait is, they’ll suddenly have four ammo bars representing their ammo. Each bar has three phases based on the amount of ammo:

If you need help with anything else in Deep Rock Galactic, let us know in the comments below. We’re here to help you kill bugs and mine minerals with success.