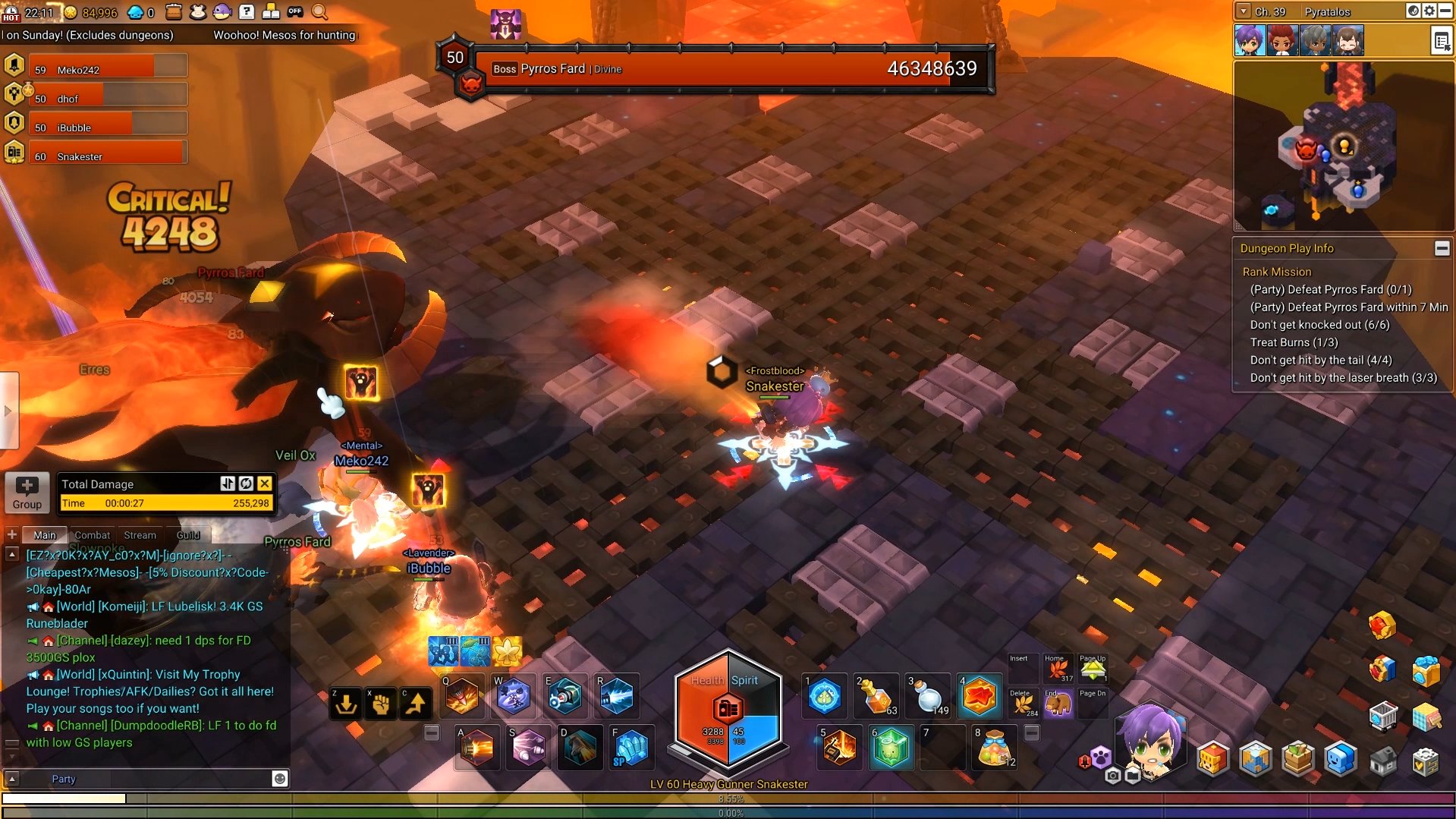 The above video is a full uncut walkthrough of the Fire Dragon dungeon, a cut shorter video will be made at some point to replace this.

The content below features every attack the Fire Dragon, Pyrros Fard does, in both phases of the fight. There’s information on how to see when each attack is coming and how to dodge it, in multiple ways. A brief intro is before each phase, giving quick tips on how to deal with it and what to expect.

Some quick information to know about the Fire Dragon hard dungeon. In Phase 1, the fight starts out with Pyrros Fard charging players until you chunk a little bit of his health bar down. Then it triggers him charging around the stage erratically until settling on a corner. Once in that corner, he’ll go through a rotation of the many abilities/attacks shown below. This is where the majority of the damage is dealt as Pyrros Fard is immobile. Quick tip, bring potions and have them on your hotkey bar.

At 70 percent health, the One Hit Laser attack comes out, be wary of this attack most. It’s dodged by going into a hole or dropping off the side to a ledge. The video showcases the attacks better and shows decent positioning to avoid them at times. 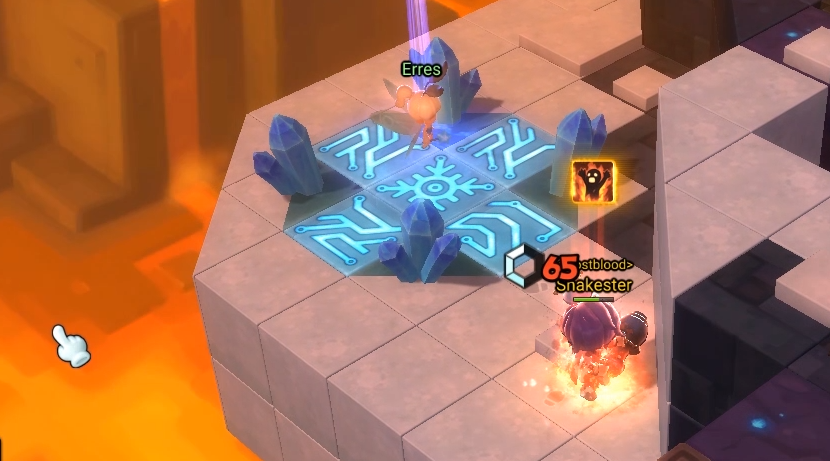 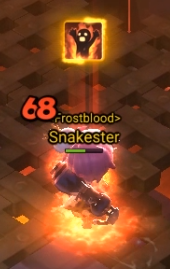 Burning Debuff (5:50)– The burning debuff applies whenever the Fire Dragon is on fire and hits you. It can stack up to five times, dealing more damage over time with each stack. To get rid of this debuff, you go to either of the two blue altars on the stage in Phase 1. One altar is at the bottom, the other is on the left side below the ledge.

Make note of these altars as they’re both great for getting rid of your debuff and a safe haven. You won’t get hit by any of the Fire Dragon attacks if you’re down by the altar. It’s commonly a spot used to dodge attacks.

The first debuff stack isn’t too strong, past that I like to get rid of it. If you’re a higher gear score or have a good priest, it’s not too bad to fight through it. I recommend as a newer player, get rid of it if you’re fighting near an altar, or if you hit two, seek one out. The altar has an NPC named Erres at it. 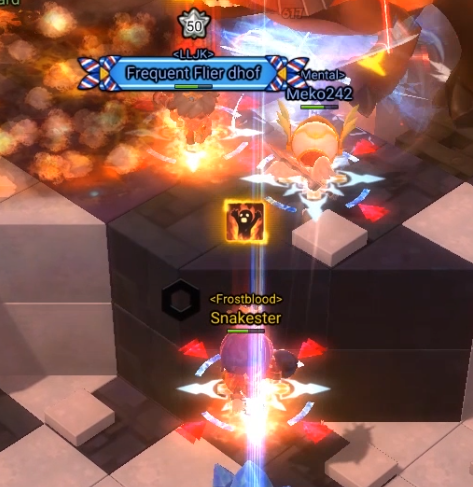 Short Charge (0:16)– The Fire Dragon puts crosshairs on every player deciding who to charge toward. This is a short charge, unlike the charge toward each corner later on. If you get hit by this charge, you’ll be flung up into the air. This can lead to players falling off the stage, taking further damage. The Fire Dragon charges more frequently in the beginning before going to each corner. (3:35).

He will still often charge erratically even if the crosshairs aren’t showing. 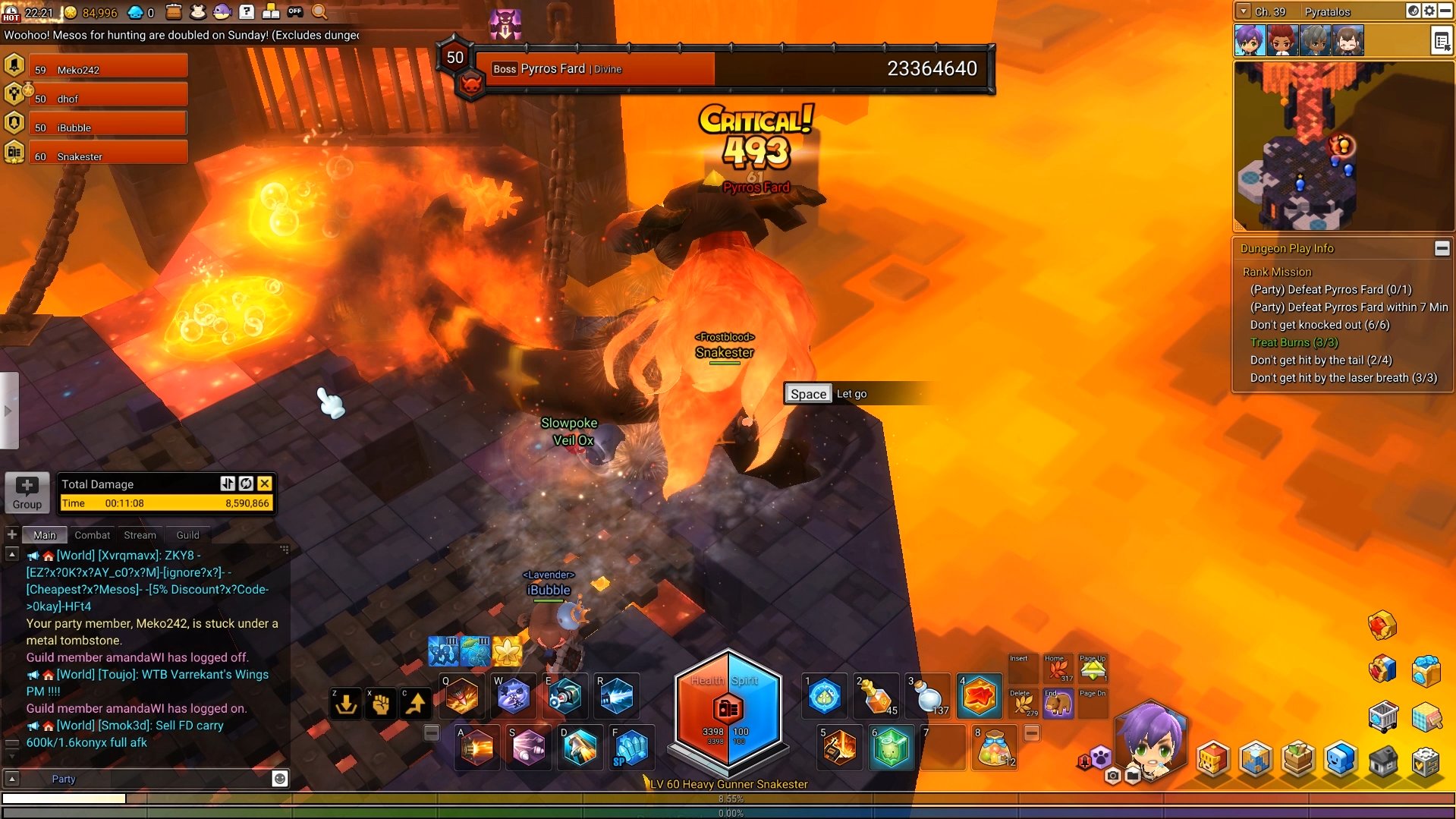 Tail Whip (2:20)– When the Fire Dragon stops at a corner, its tail will face away from it, facing you (the stage). It will either do a Tail Whip or Tail Slam. The Tail Whip is easy to see coming as the boss pulls its tail backward getting ready to whip it across the stage. The Tail Whip is dodged by running away, dropping off a ledge, or going into a hole. You can also grab onto Pyrros Fard by running up to them to dodge the Tail Whip. This does not work on the Tail Slam. 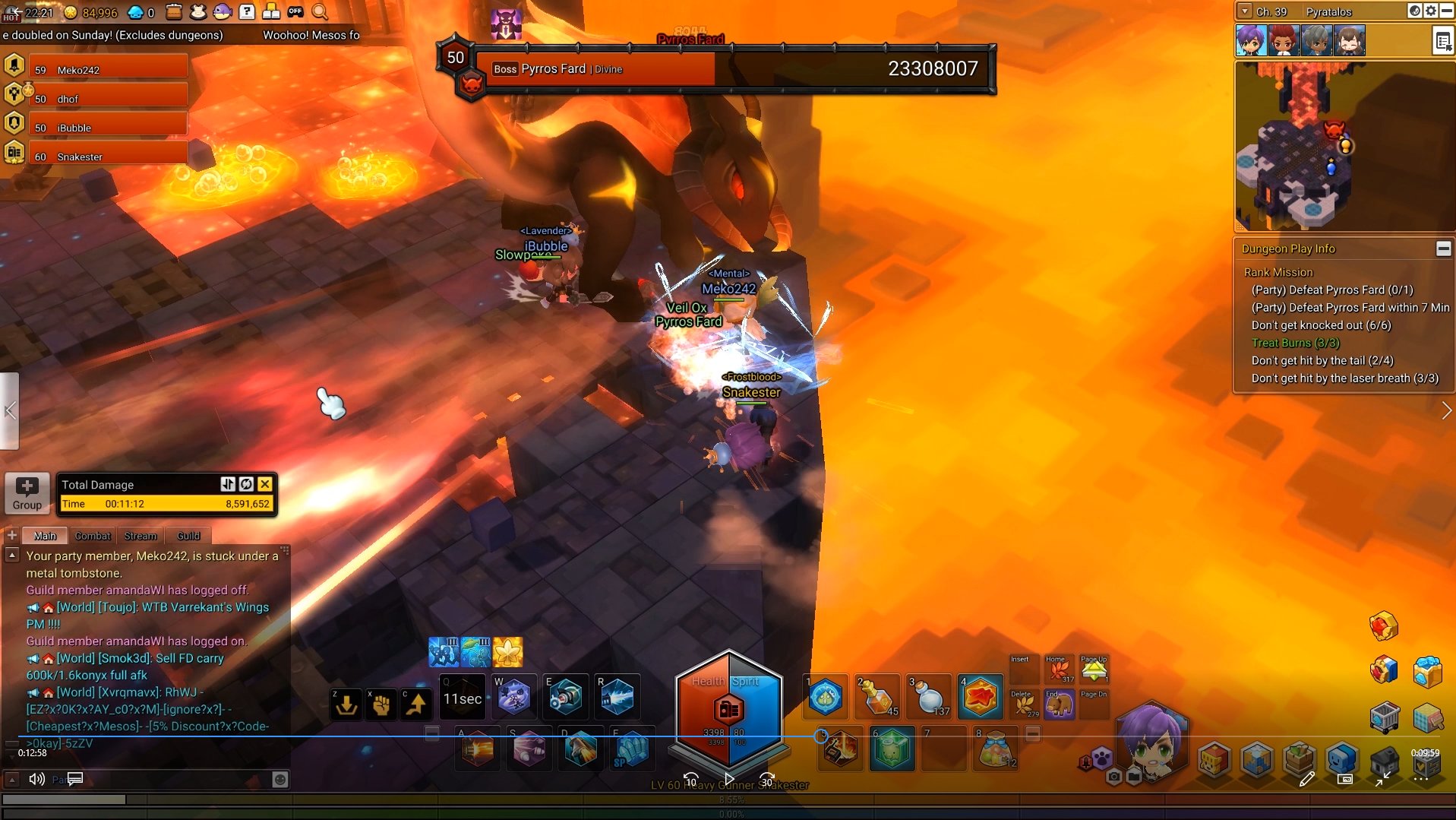 Tail Slam (2:26) – Pyrros Fard will slam his tail on three-thirds of the map, one third at a time. The pattern is random, but it works by hitting left, middle, and right. It can happen in any order, but it will never repeat. Therefore, if it hit the left, it won’t hit the left again, etc. This is good to take advantage of as you know you’re safe in an area already slammed.

The Tail Slam cannot be dodged by going into a hole. 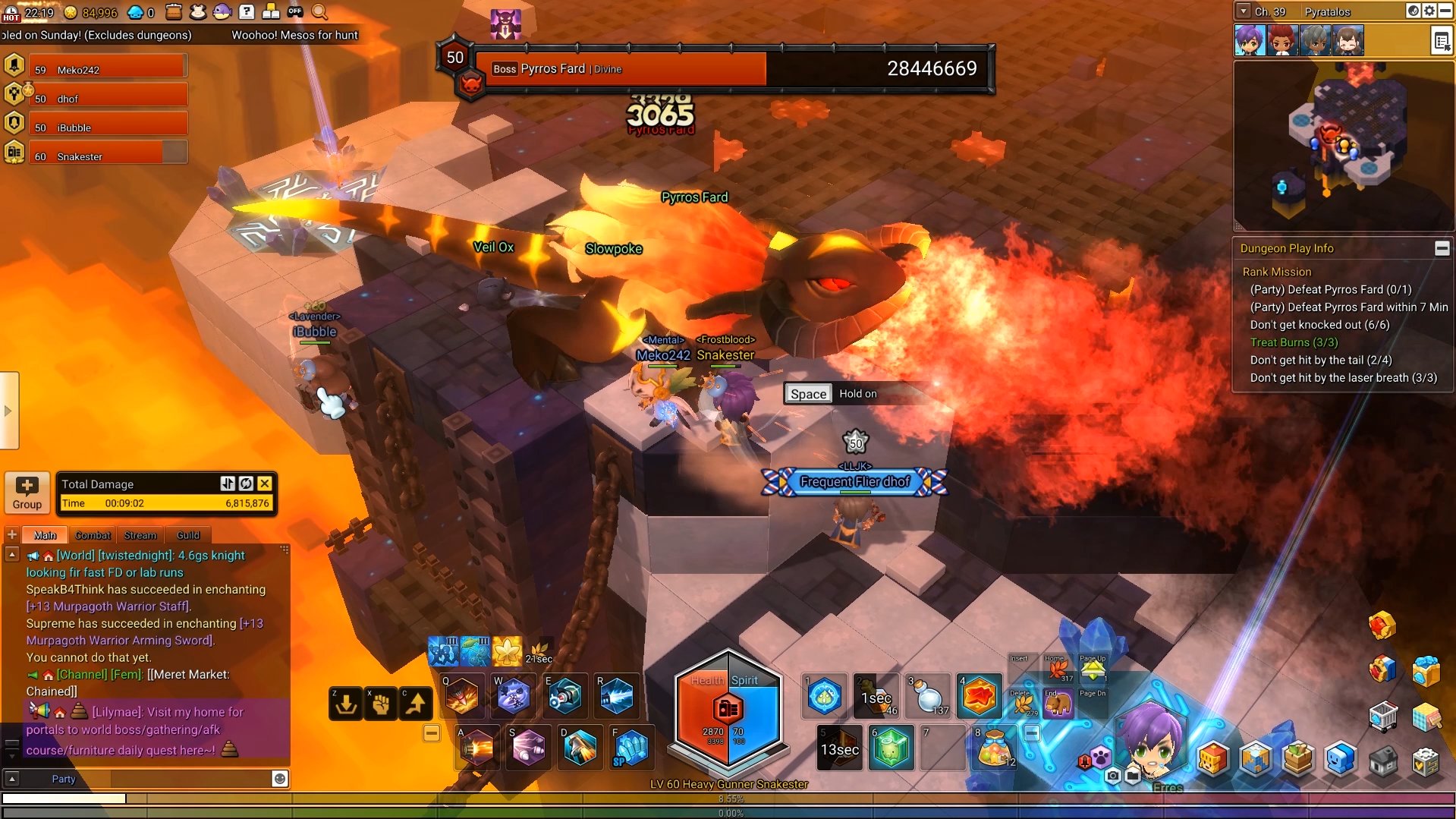 Short Fire Breath (2:50)  – The Fire Breath attack is a cone attack of fire toward a target player. This can be dodged easily by either stepping out of the way, dashing, or having the right positioning. The position shown above is a popular location for the bottom left corner. The bottom right corner has a similar spot, often used for dodging attacks.

Roar Stun (6:42) – The Fire Dragon will jump into the air once, then a second time, and come down to begin the roar. This roar will stun anyone not in a hole or off the side on the ledge. There isn’t a follow-up attack to this in the first phase, so if you get stunned, it isn’t too punishing.

The main reason to dodge the Roar Stun, is to continue dealing damage to Pyrros Fard. The Roar itself is only active for the first second or so, even though the animation continues for a few seconds. Therefore, players can dodge the stun by going into a hole or to a ledge, then come back while the animation is still going. 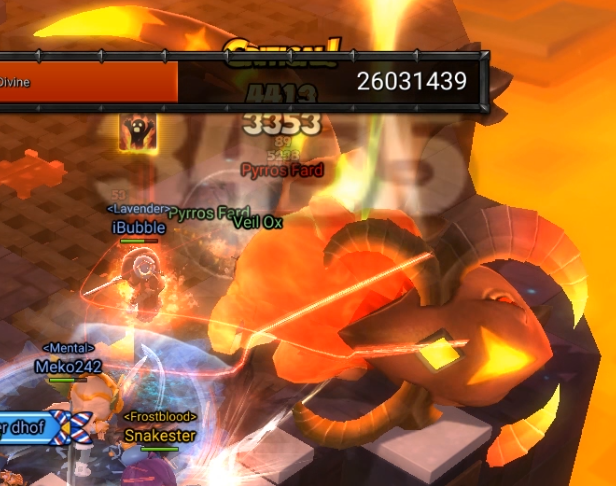 Body Slam / Roll (2:39)– The boss will jump around in a circle, in place, then roll around on its back. This animation is comparable to an excited dog. Unfortunately, it’s difficult to show in the picture above.

This attack has a small range of effect, doing an AoE of damage to melee classes. Ranged classes should be okay so long as they aren’t standing on top of the boss. It’s important to dodge this, especially for melee classes as it can deal a great amount of damage. It likely won’t one hit you, but it won’t feel nice either. 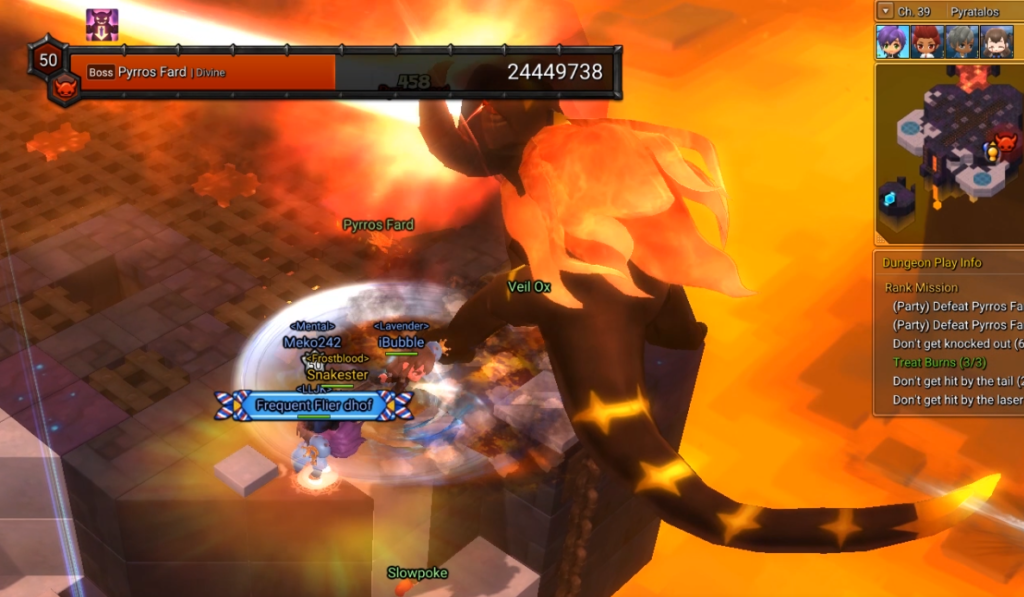 One Hit Laser (8:25) – This is the attack that will catch a new player off guard coming in for that one-hit kill. The laser attack starts when Pyrros Fard hits 70 percent health and is also noticeable when holes in the ground appear. These holes are shown in the picture below, featured all over the stage, even though you’ll mainly be using the ones at each corner.

The Fire Dragon will shoot a laser beam from both left to right and right to left, which does enough damage that nobody wants to get hit by. It doesn’t matter what gear score you are, you still don’t want to get hit by it. However, the closer you are to the boss, the more damage the laser will do to you.

The Fire Dragon will make a GRRR sound audibly and it will pop up as a speech bubble above his head, indicating that he’s about to use his laser. Visibly, the Fire Dragon will stand up, and turn his head to one side. That’s the side that he will start the laser on, and then move to the opposite direction, across the stage.

The laser can be dodged by dropping into a hole or off the ledge in Phase 1. Once you’re comfortable with dodging the laser, if the laser starts on your side and you’re close enough to the boss, you won’t get hit. You have to position correctly near the ledge and this is only applicable in the first phase. Some players will fight behind the boss, inching from one side to the other, so they can keep fighting as a melee especially. 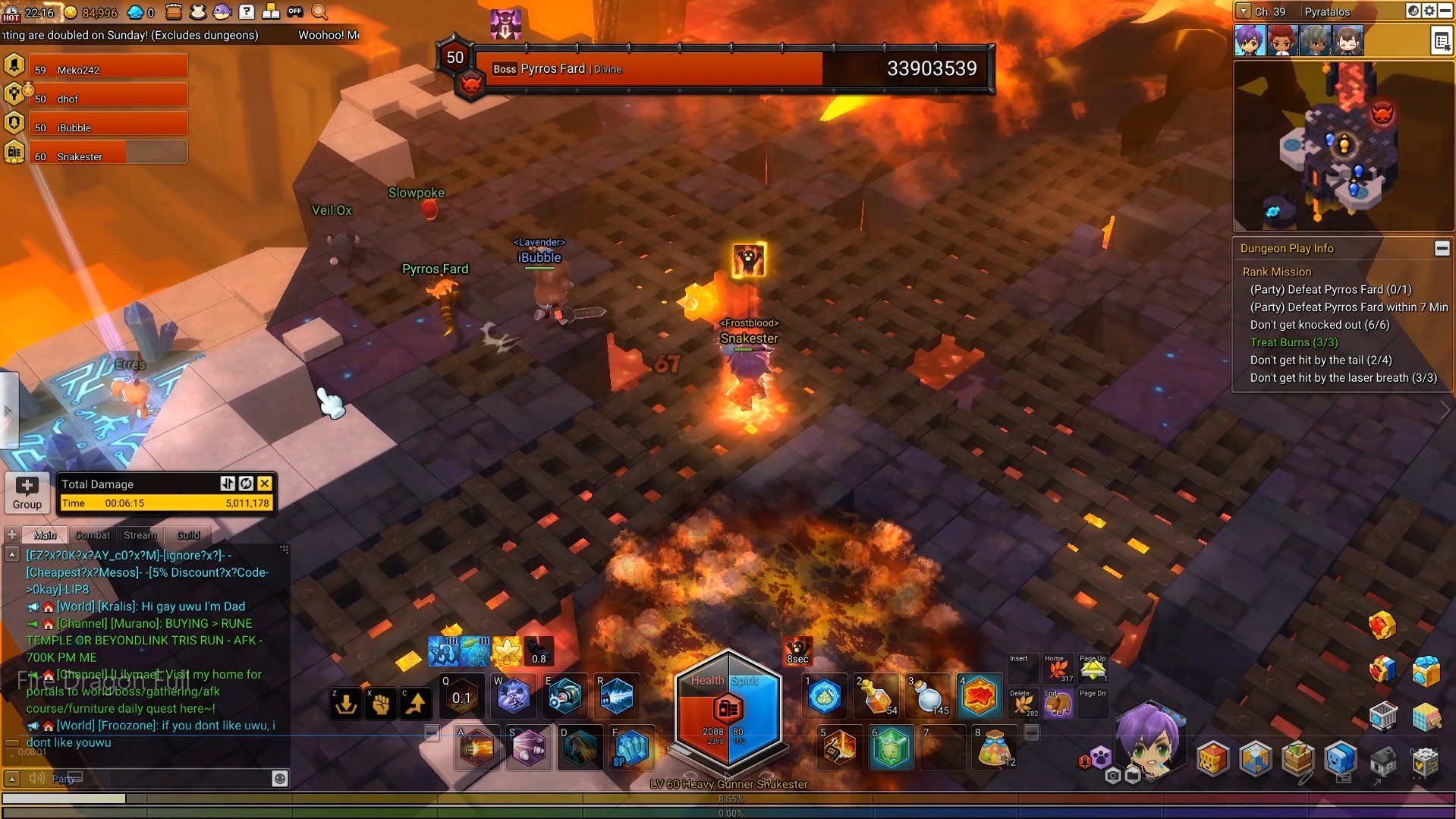 Phase 2 begins when Pyrros Fard reaches 35 percent health. At this point, Pyrros Fard sprints away to the north, going to a second part of the dungeon. Players can grab onto him for the ride, or wait for the Erres NPCs to give a buff for safe passage across the lava. Many of the same attacks from the previous fight are in Phase 2, therefore you’re prepared for those ones.

The only major change is the Fireball attack, full stage Fire Breath attack, and Pyrros Fard is always in the same spot. 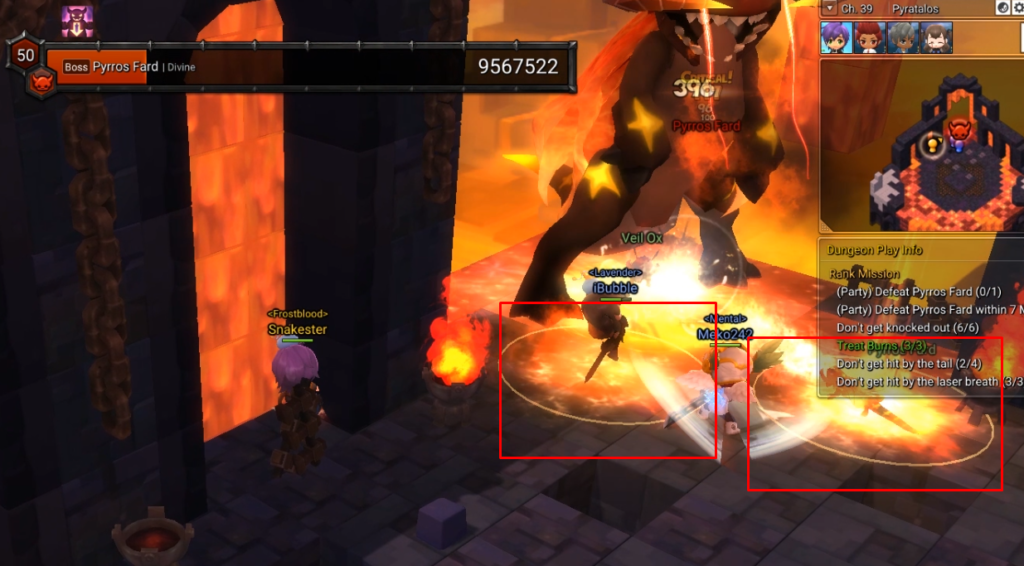 Fireballs / Meteors (16:07)– The Fire Dragon stands up and shoots fireballs at specific players and drops an AoE on the floor where it lands. After about 2 seconds, the fireball AoE will explode doing damage. The picture above highlights in two red boxes what the AoE looks like after landing.

The position of my character, “Snakester” on the left, hiding behind the wall, is the go-to spot for ranged classes. Any fireballs sent toward this spot if you’re deep in the corner, will hit the wall, leaving no AoE. Players can also continue to deal damage by shooting toward the Fire Dragon through the wall. Fireballs will also hit people in holes.

If another party member fights near the safe spot, it’s possible a fireball can hit the ground and the AoE will reach you. This strategy relies on the fireball hitting the wall. The only disadvantage of this spot is if you don’t get out when the Fireball attack is over, you might not be prepared for a laser. 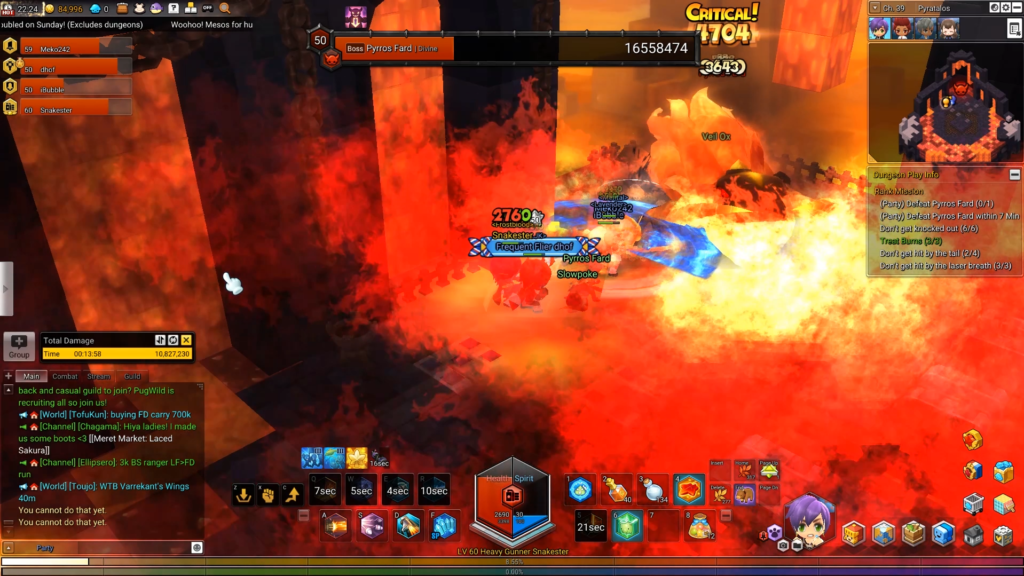 Full Fire Breath (15:30) – The Fire Dragon does a full 360 spin and unleashes fire onto the entire stage. This is where the priest comes in clutch! Everyone in the party needs to group up and the priest can out heal the Fire Breath. If you don’t have a lot of health and are worried about dying or about your priest healing you, just keep an eye on your health and have that healing potion ready. More often than not, everyone in the party will group on the left side.

If your party doesn’t have a priest, you’re going to need to use a lot of elixirs. The 25 percent health elixir and 50 percent health elixir are on different cooldown timers, allowing you to use both simultaneously. This is one way to survive the fire breath without dying if you don’t have a priest to heal. This isn’t a recommended playstyle, especially for a new player.

Short Fire Breath (18:10) – Similar to the Fire Breath that takes out the entire stage, this one is more focused, as we saw in the first phase. It will target a player, breathing a cone of damage around them. This can easily be dodged or healed by a priest as well. 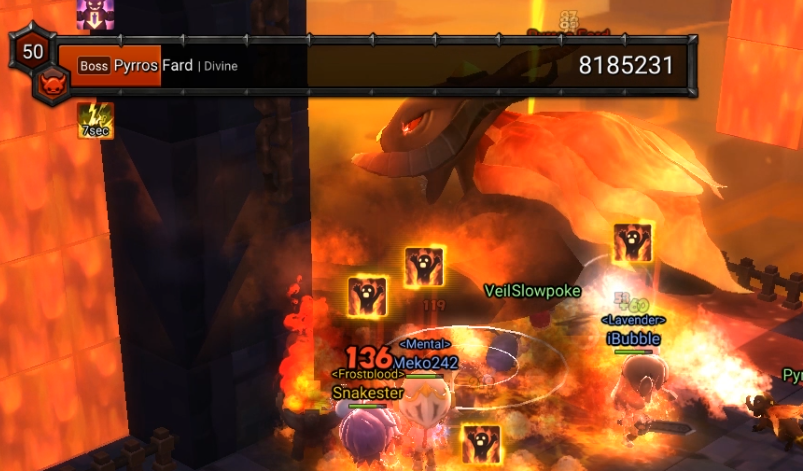 Fire Debuff – The fire debuff is less common in Phase 2, however, there’s no blue altar to get rid of it. You simply have to wait the timer for it to go away.

One Hit Laser (15:49) – The laser functions the same as in Phase 1, however you can only dodge it by dropping into a hole. Players can’t stay up top as you can get away with in Phase 1. I’ve read that you can climb pillars to get above the laser, but it would take too much time to do anyway. This hasn’t been tested by me.

When the Fire Dragon is around 10% health, if he does two lasers from right to left, back to back, he will quickly follow up with a left to right laser. This a common 3 laser combo near the end of the dungeon.

Roar Stun – This functions the same as Phase 1. The only difference this time is the Fire Dragon may follow up with an attack. The safe window is a lot smaller than in Phase 1 and can be punishing if you get stunned. However, you’re okay in most cases.

If you have any tips on the Fire Dragon hard dungeon and how to take down Pyrros Fard, be sure to drop a comment below letting us know! Every day people are bound to figure out something new about this fight and it only helps us all to keep helping everyone learn in the MapleStory 2 community.