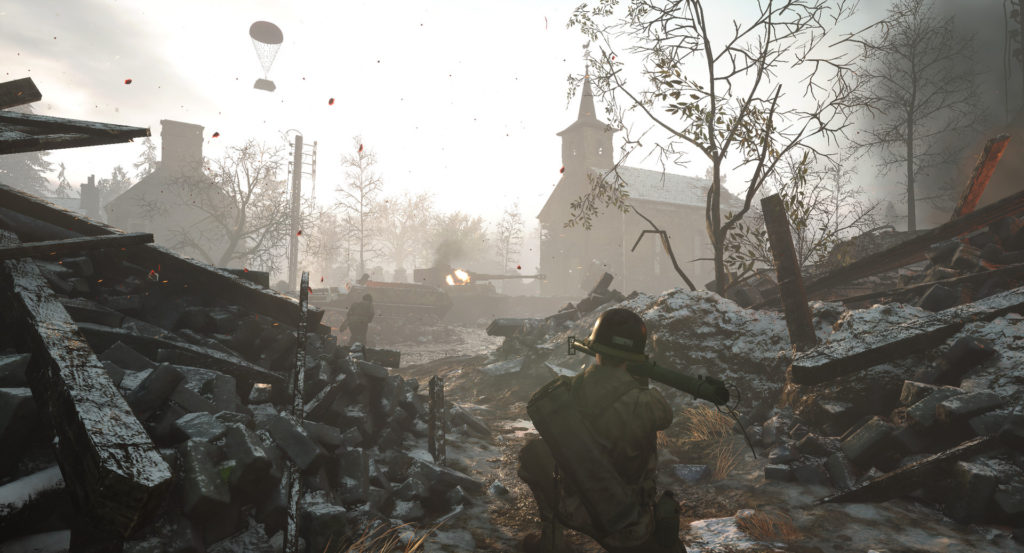 Team communication combined with a good anti-tank role is the best way to destroy armor.

If you run into problems with your voice or microphone not working in Hell Let Loose, take a look at our solutions here.

Hell Let Loose is another entry in the World War II genre on Steam with an emphasis on 50 vs 50 player action. What makes a strategy game like Hell Let Loose unique is its ability to grab such an interesting community. Each map consists of constant communication over voice and text chat leading to plenty of odd personalities. Honestly, the voice chat is what has me constantly coming back to play more.

The first game I would compare Hell Let Loose to from personal experience is Squad. It has similar group and team mechanics, with some obvious differences. Having not played Squad on Steam in over two years, this is a nice strategy game to get back into. Both attract people of all personalities making miscellaneous chatter always entertaining.

Communication in Hell Let Loose controls which team wins in most cases. If your team is full of stormtroopers missing every shot, yeah, you still might lose. However, each match focuses more on strategy and skill on a larger scale. It’s not the fast-paced gameplay of Call of Duty or what Battlefield has now become. Along the same line as Squad, communication and teamwork are what makes Hell Let Loose captivating.

The beginning of a match can be one of the most interesting moments. More often than not, it’s a long run on foot from your team’s headquarters to wherever the front line is. I’ve never clocked it myself, but this can be anywhere around five minutes give or take.

These five minutes are more often than not when your unit bonds and truly becomes, a unit. This is also the moment you hope that everyone in your unit has a microphone so you can keep up that communication all game. Assuming you don’t have someone constantly saying “Sieg Heil” in your unit because you’re on the German side. Fortunately, this only happened to me once and I left that unit to get away from them. If they only said it one time, then whatever, I would have ignored it. It was that they kept saying it, asked for others to say it, and wouldn’t get the message when nobody did. 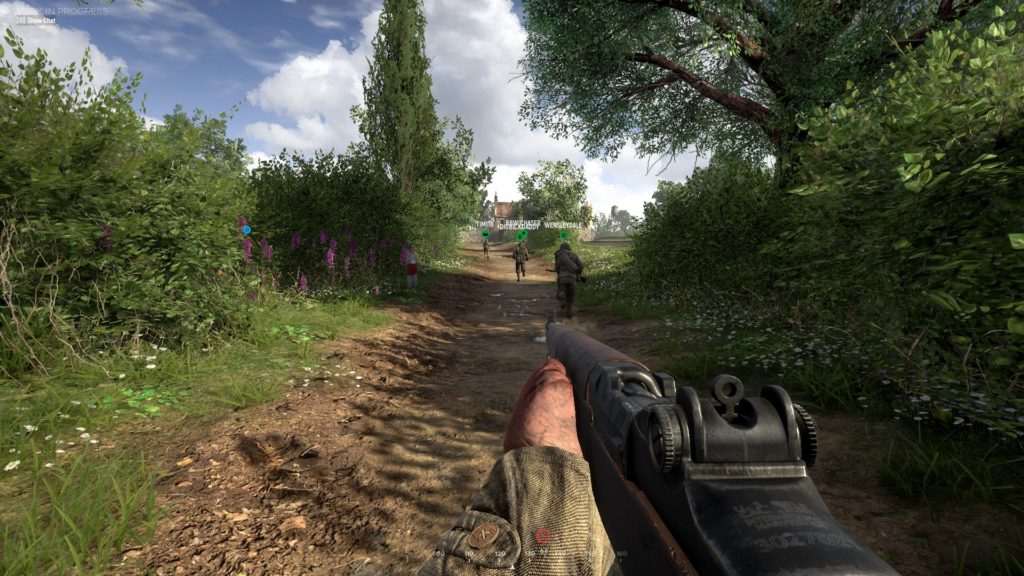 When a unit stays together, they accomplish more compared to being staggered.

Assuming you’re not in that foolish situation, you can get some real characters. I don’t know if it’s the community, the type of game, or what that attracts this player base. I run into veterans, drunk people, roleplayers, and more.

I’ve always loved those early few minutes in both Hell Let Loose and Squad especially. We’re all bored holding the button to walk forward and sprint while wishing there was a toggle run option. We all know the pain of mashing your pinky finger into that shift key for way too long.

The fact that this run is so tedious and there are no enemies in sight to shoot at, doesn’t really give you much to do. So, what do you do? This void of no action often leads to all the different personalities coming out. My best matches in Hell Let Loose can last over an hour and still be entertaining because of those teammates. 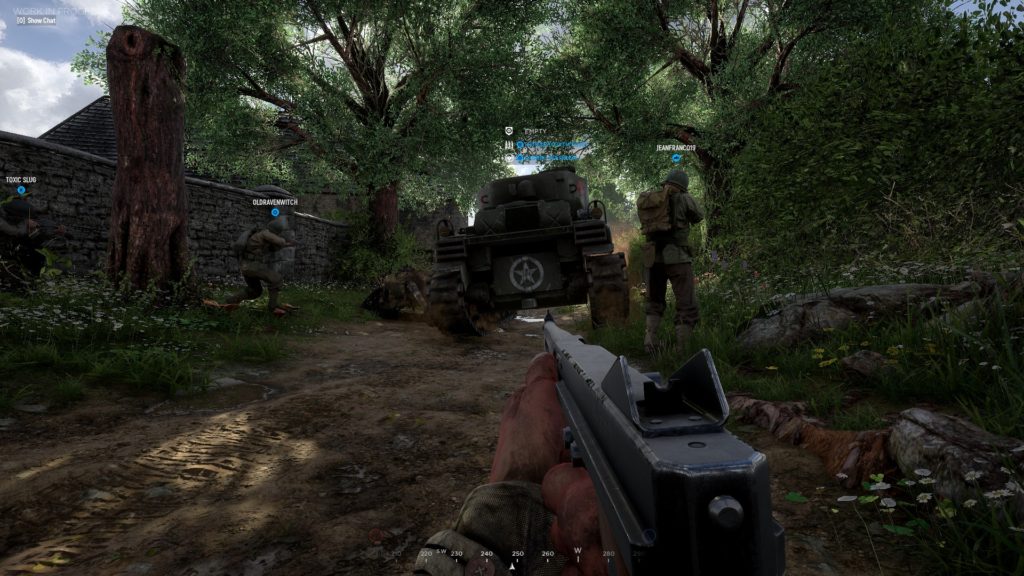 Infantry groups and armor can work together to push objectives with ease.

It’s difficult to get a good group together with microphones and people that can laugh while getting the job done. Those chaotic moments of hilarity and the moments under fire, yelling out bearings from your compass. This is what makes it all the worse that voice chat tends to cut out often forcing you to rejoin the server.

Strategy games like Hell Let Loose get competitive and often lead to bickering when things aren’t going perfect. It could be when a friendly artillery shell hits your unit or simply a team not listening. Finding the balance among a 50 person team is how your experience becomes a good one. 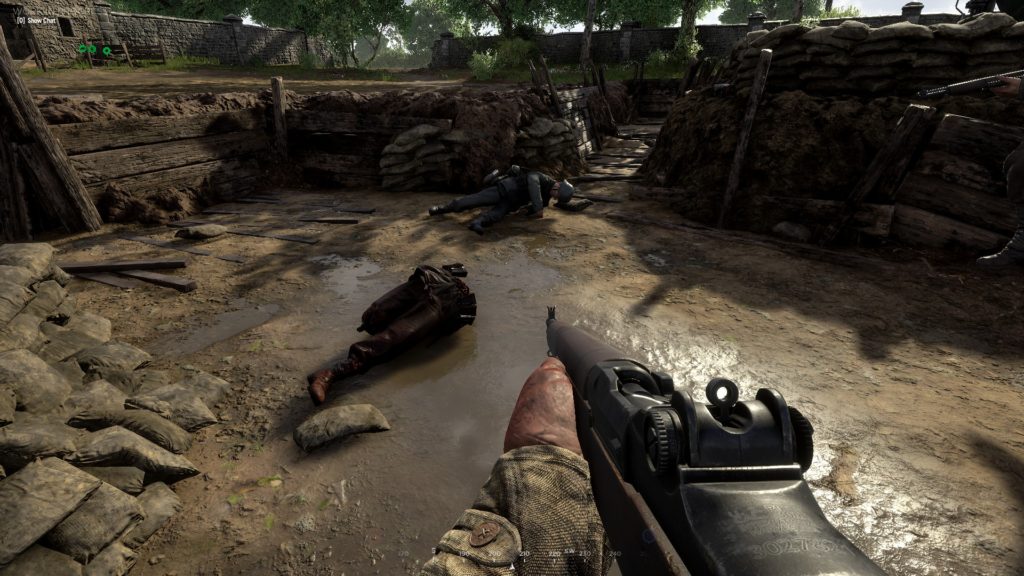 Don’t try talking to the dead, they probably won’t respond.

If your team non-stop complains in text or voice chat, it’s only going to hurt your team and pleasure of the game. I’ve frequently played the role of Unit Leader and had my ears practically bleed due to several Unit Leaders bickering over each other. In reality, we’re not military trained officers leading a six-man unit into battle. Your Unit Leader could be a teenager that hasn’t hit puberty or a 50-year-old man. It varies and you never know what you’ll get.

I recall more than one match where a Team Commander would not stop complaining about everything going wrong. There was over an hour left in the match and the Unit Leaders remaining needed a little morale boost to fight through it. What happened as we defended our final point against the enemy team?

I rallied the remaining Unit Leaders and pointed out how much time we still had and what we needed to do. Our team vote kicked the Team Commander and a Unit Leader stepped up, giving it his best try. This is a case where a vote kick commander option would be appreciated. 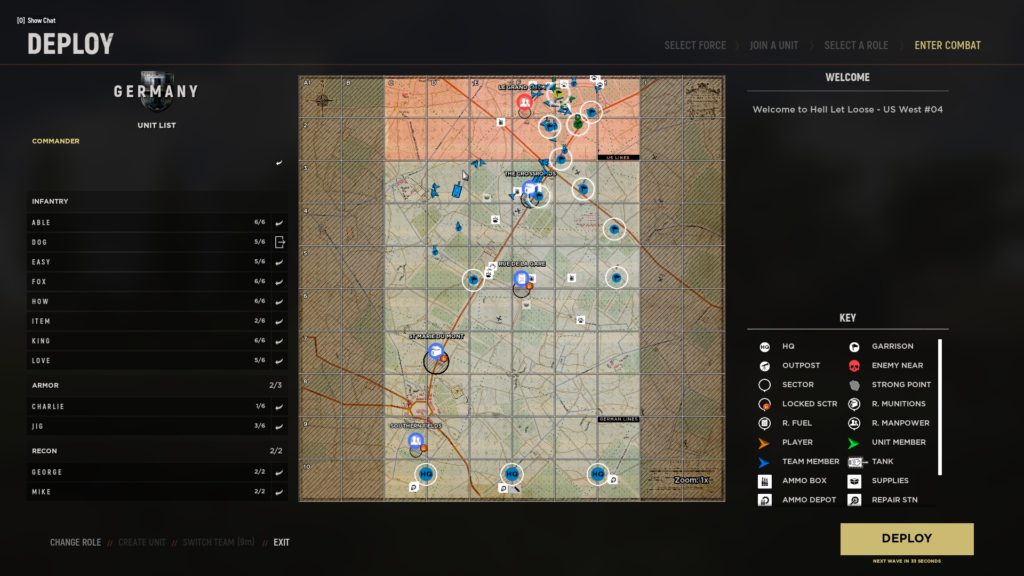 Hell Let Loose battles are won when people have multiple garrisons to deploy at.

A team in Hell Let Loose has 50 people and at most can have 8 full units if you don’t include the smaller ones. That’s eight different Unit Leaders on comms (communications) with a commander as well. I’ve had positive experiences in leadership roles and can understand how to handle that. Those eight Unit Leaders rallied back from defeat, originally less than a minute away.

This is how the real skill and strategy in a game like Hell Let Loose is about communication over gunplay. I recall one of my early matches where I was a Unit Leader and this one guy was the best artillery I’ve ever seen.

There are a few roles in Hell Let Loose I don’t intend on playing for a while. Artillery, controlling a tank, and possibly Team Commander. I could come around to them eventually, but they’re roles that require a bit more education and training. 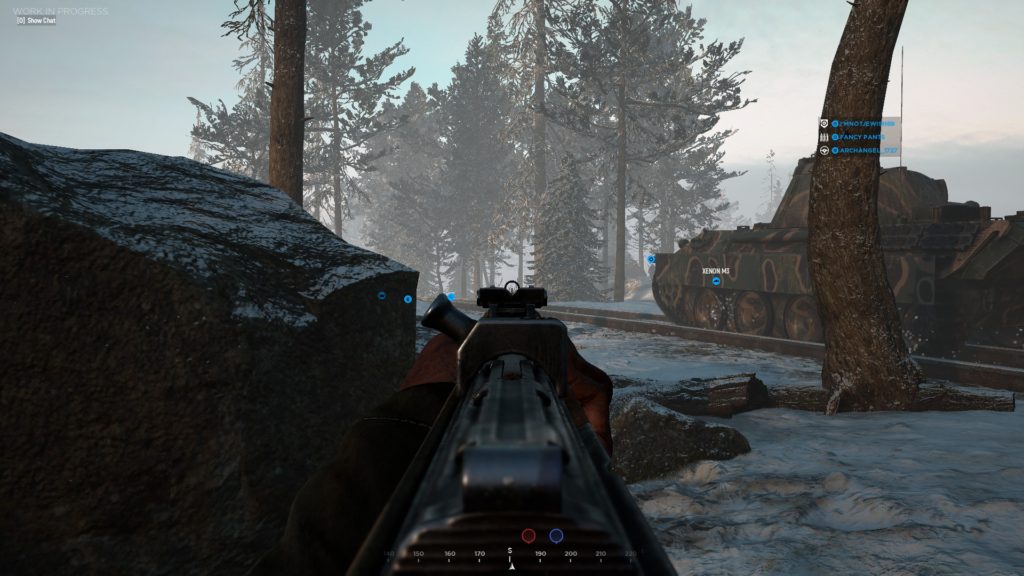 Supporting an armor squad moving forward helps prevent anti-tank roles from getting the jump on them.

This artillery player was a Unit Leader which is both important and unfortunate in some cases. If you aren’t a Unit Leader, you can’t communicate with other Unit Leaders and the Team Commander. If everyone could, there would be no point for a separate comms channel and it would be chaos.

Artillery players need those comms so they can get markers on where to fire artillery. Whether they’re firing explosive shells or smoke shells, it’s important to not misplace them. A misfired shell can be what destroys your front-line or gives the opposition smoke to push forward.

The unfortunate issue that arises when you have a Unit Leader at the spawn using artillery, is that they can’t place spawns for the unit itself. It creates a tough situation that can be solved, but often won’t be. 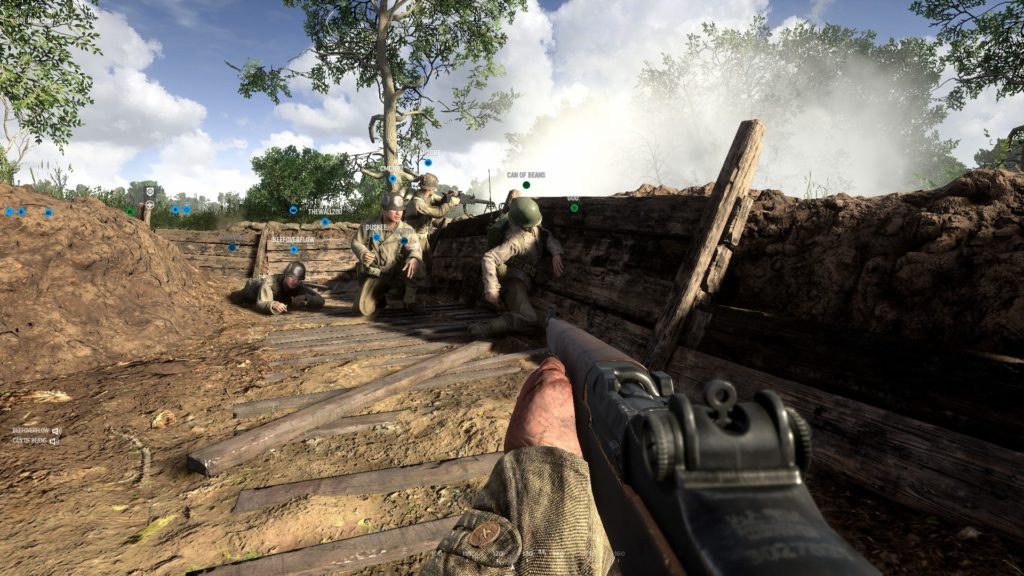 Hunkering down in trenches is a great time when everyone coordinates their defense.

Nevertheless, this artillery player was excellent. He spoke with a robotic voice in a way that was both hilarious and perfect simultaneously. It wasn’t that his mic quality was bad, but that he was very methodical. He was always ready to fire artillery and awaited instruction from the Team Commander. I’d be randomly pushing an objective with my unit and hear, “Awaiting artillery mark.” Or, “Artillery ready when required.” He spoke in short sentences and got the job done quickly.

Not Everyone Wants to Talk

The unfortunate reality in Hell Let Loose is that many people don’t have microphones or don’t want to speak through them. I could join a match and play without a single unit member speaking. Or a full game with a voiceless Unit Leader and people, unfortunately, berating that leader. Often, however, it only takes one person to get communication started. Anytime I get into a unit at the beginning of a match, I ask immediately, “Who has mics?” Or, “Do we have any mics?” It makes a difference. 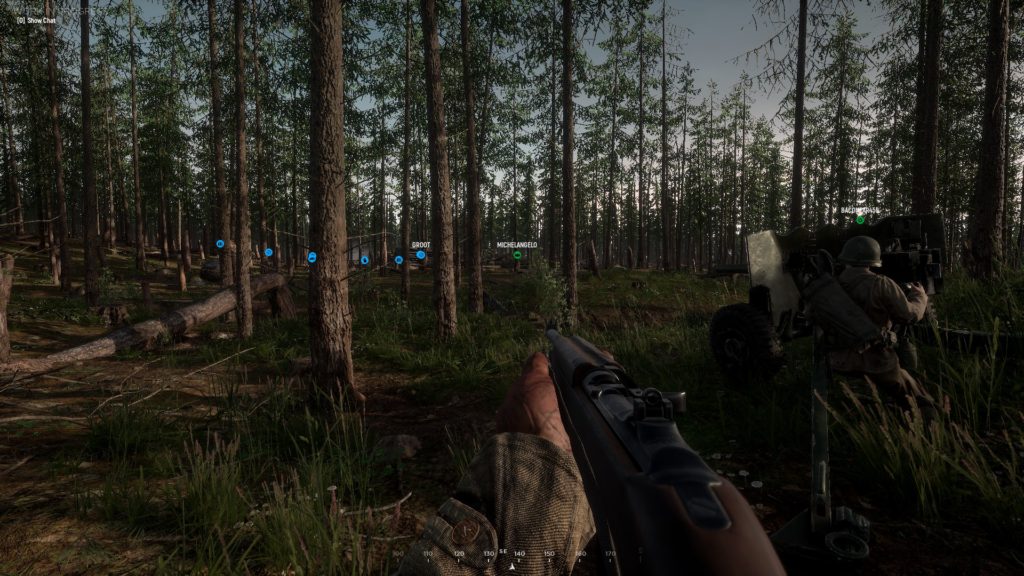 The woods are an important place to communicate when enemies are hiding behind hundreds of trees.

The people playing Hell Let Loose understand how important communication is and how it wins the battle. Although, people still often need a nudge to get the first word out of them.

The roadmap detailing future planned updates is available here. A digital key was provided via the publisher, Team17.

If you run into problems with your voice or microphone not working in Hell Let Loose, take a look at our solutions here.

Hell Let Loose is available on Humble Bundle and Steam Early Access as of June 6, 2019. At the time of publication, Team 17 hasn’t announced any plans for a PS4 or Xbox One version.