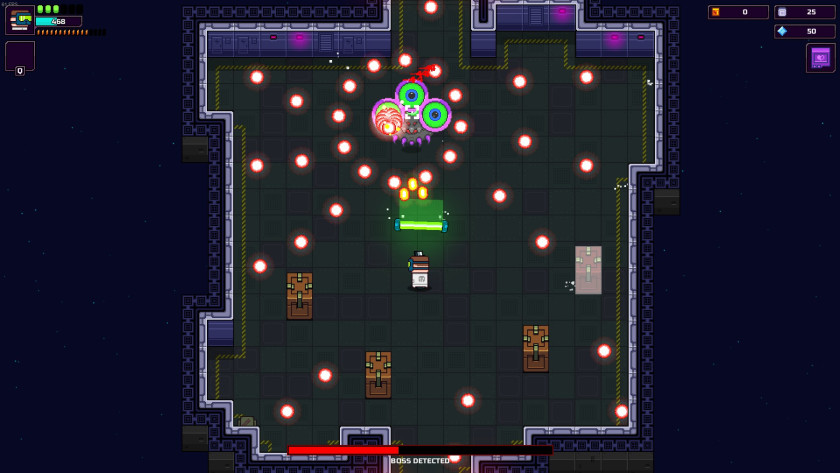 Jump into Spaceship Looter if you’re looking for a bullet hell roguelike with a retro atmosphere. Developed by Luxorix Games, it delivers a fast-paced, difficult, roguelike where you’re bound to die in space. It starts off asking the question of what happens to a ship when its crew dies? That’s where you come in, the mercenary!

The premise of the game is you play one of five mercenaries roaming for ships in space to loot while battling it out with aliens. After these ships are abandoned, they become filled with aliens waiting to be taken out for sweet sweet loot. By having randomly generated levels, with each ship/zone having two layers to it, you never know how each layout is going to be. However, it can still feel repetitive as there’s still not a whole lot of variety to it.

Each zone distinguishes itself from the others with unique aliens to fight, a boss, and a certain aesthetic to it. Regardless of how many times that floor changes on each ship, each ship does get repetitive. Assuming you can get over the first few hours of dying in the first area, the game opens up. It plays like a grid going from room to room, fighting it out as many roguelikes do, such as The Binding of Isaac. Then later progressing to a new ship with new loot and enemies.

Despite starting with the difficulties easy and very easy, very easy is more toward a hard difficulty. Spaceship Looter starts you with one character and allows you to unlock the others by defeating bosses, which isn’t too difficult when you get one solid run going. However, getting that run started can be a chaotic experience. Especially from unfortunate game design hindering your playthrough.

The Walls Hide Everything in Spaceship Looter

The developers created this roguelike with the game playing on an angle camera perspective. Essentially meaning, you can slightly be hidden behind walls on a certain angle. This leads to enemies hiding behind walls, bullets hidden, acid pools that can kill you, and more.

There were countless encounters where I died by a stray bullet hidden along a wall. Or I ran into a floor hazard that I couldn’t see, preventing me from moving. The walls create a difficulty that almost feels unnecessary. It’s not the sort of bullet hell where your skill comes down to dodging the bullets. Instead it’s about trying to avoid areas that take advantage of you because of poor design.

Oddly enough, enemies and bullets tend to be unpredictable when they should be predictable. I can’t confirm this, but I’m fairly certain, there are enemies and bullets that randomly decide what to do. For example, an enemy when killed might just die normally whereas the exact same type might explode into bullets. With no distinguishing factor between the two, nothing leading you to prepare for it.

In the roguelike genre, you get better at games by learning what you’re up against and then fighting around it. Randomly generated levels still give you the variety to prevent it from getting repetitive. But, making enemies look the same while acting differently, creates a situation where you can’t do well.

This issue alongside the way walls are designed, creates two odd problems with the difficulty of Spaceship Looter. It becomes less about skill and more about the game deliberately taking advantage of you. Bullets act similarly in that you can’t predict them sometimes. I’ve found that certain bullets are designed differently to show if they will explode when hitting an object or wall.

Then I realized, yet again, it was simply random on whether they’d explode into more bullets or not, despite having a separate design from a normal bullet. Decisions like these are frustrating as you never know if that bullet hitting the wall behind you is going to be the end of your run. You can’t rely on anything.

Despite many flaws with the difficulty of Spaceship Looter, all taking place on the “very easy” and “easy” difficulty options, it still can have its fun moments. It’s unfortunately not forgiving in letting you get to that point. The soundtrack keeps in tune with the retro style Luxorix Games created. Which makes those moments filled with action even more intense.

What Keeps You Playing?

Aside from randomly generated levels, and the different characters, a strong area of variety comes from the guns you can find. Each gun has its own playstyle giving you the choice to mix it up on what you use. However, there are certain weapons that stand out from the rest as obviously better. Whether it’s taking advantage of its fire rate, ammo capacity, damage, or even its ability to home bullets. Spaceship Looter lets you discover NPCs early on in the game that unlock areas in your starting area, such as a shop.

Luxorix Games went with the approach of letting you unlock temporary buffs, items, and shortcuts, by gaining currency through playing. While they aren’t needed, they can make or break a playthrough, or perhaps jump you ahead to a new floor because you new something new.

It can be frustrating that the weapons are temporary, as they’re often expensive, and you won’t be getting much currency unless you’re doing well-defeating bosses. They’re mainly there to give you an advantage in starting your run, which can sometimes feel like it’s needed to make progress.

Spaceship Looter has a double-edged sword with the items and objects in your environment. They can random cardboard boxes you stomp out of your way, or containers waiting to explode into a bunch of bullets. This can come to your advantage and at the same time, create a ridiculous amount of bullets you’re unable to dodge.

Combined with the unfortunate wall design, you’ll occasionally hit these by mistake ending your run. However, some objects can be thrown like exploding lamps or spiked platforms for example. These can create interesting situations.

The characters have mini backstories and unique designs to them. After unlocking every character, it feels as though only one or two are any good. Each has their own skill that makes their playstyle special, with a couple of specific traits. It may be shooting a laser or throwing out a turret. This is another way Luxorix Games attempts to provide variety and reward players for their progress.

Spaceship Looter is the type of game you’ll put anywhere from 5 – 10 hours in, and never play again. Which isn’t a bad amount of time for a price of $9.99. However, with how easy it is to find deals using Steam and various other distributors, pick it up on a sale if you’re going to. (Editor note, the developer made it free-to-play on Steam)

The difficulty is frustrating, its variety is there, but not for putting in 100s of hours as other roguelikes may. Deaths more often than not are disappointing and not due to a lack of skill, which demotivates you from continuing on.

Spaceship Looter was provided by the developer via a Steam code.